Roadside St.19: On such big day in the Alps, not all the action was on the roads… Ed Hood made a strategic move to the start village and caught up men who aren’t afraid to speak their minds: photog John Pierce, & former pros Leon Van Bon, Tim Harris, Malcolm Elliott, Dag Otto Lauritzen, and certain team owner… 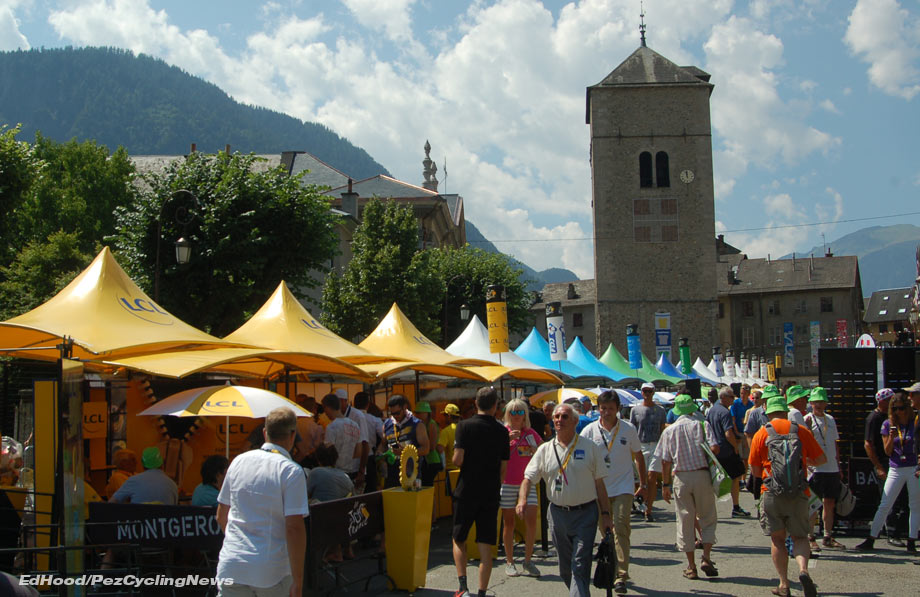 ‘Hi Mr. Tinkov, how are you today; we’ve chatted a few times in the past, do you remember ?’

‘What about your team’s Tour so far ?’

It’s not going to go down as my greatest interview – the last time we spoke he was chatty, smiley and larked around for the camera.

But I guess if I’d been telling anyone who’d listen that my boy Alberto was going to add to his Giro victory with a “double” in Le Tour, only for the Spaniard to languish at 6:40 on the maillot jaune, I wouldn’t be chatty/smiley either. 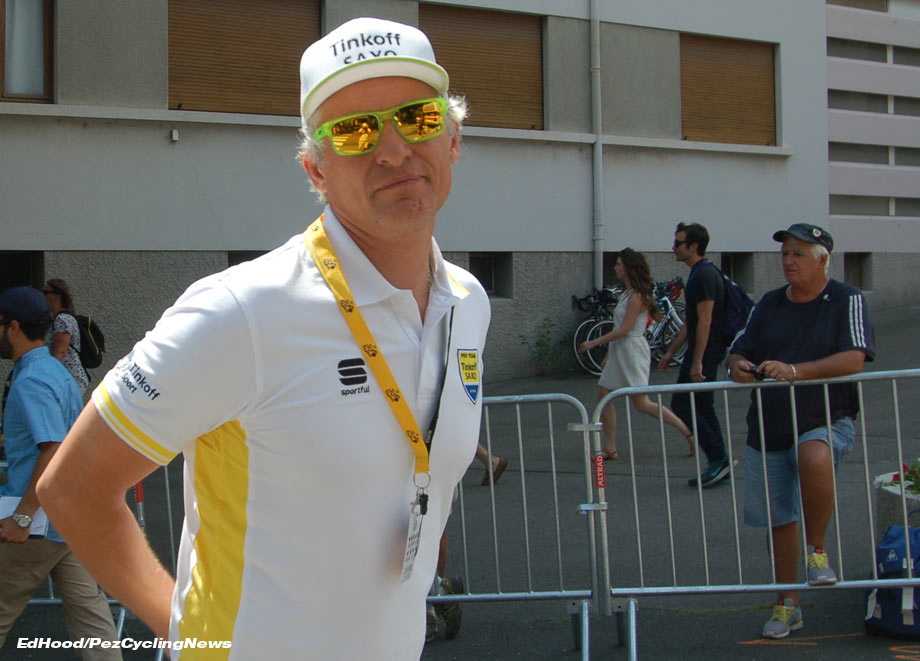 Still, he did let me take his picture.

Stage starts – you have to work at least once during a Tour.

The caravan is lined up beside the river as we head into Saint-Jean-De-Maurienne to see the start of Stage 19. 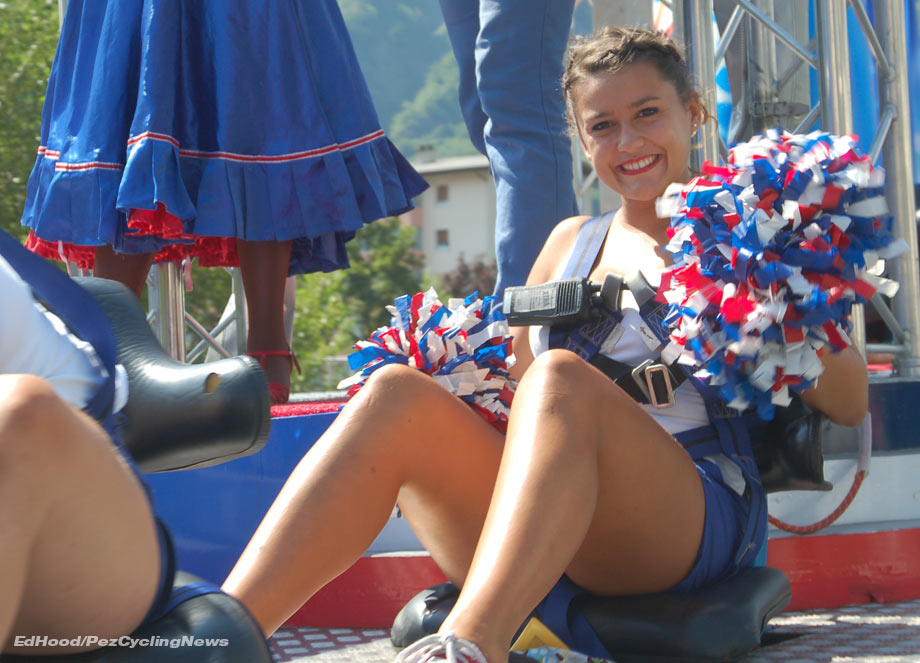 We line up alongside the crazy collection of contraptions and wait for it to roll – when it eventually does we’re in prime position for ‘pretty girl shots.’

All good things must come to an end though and eventually the caravan is off on it’s merry way around Les Alpes.

We abandon the car and head for the village via the bus park; they’ve just begun to line up the cars and buses as we stroll up the hill. 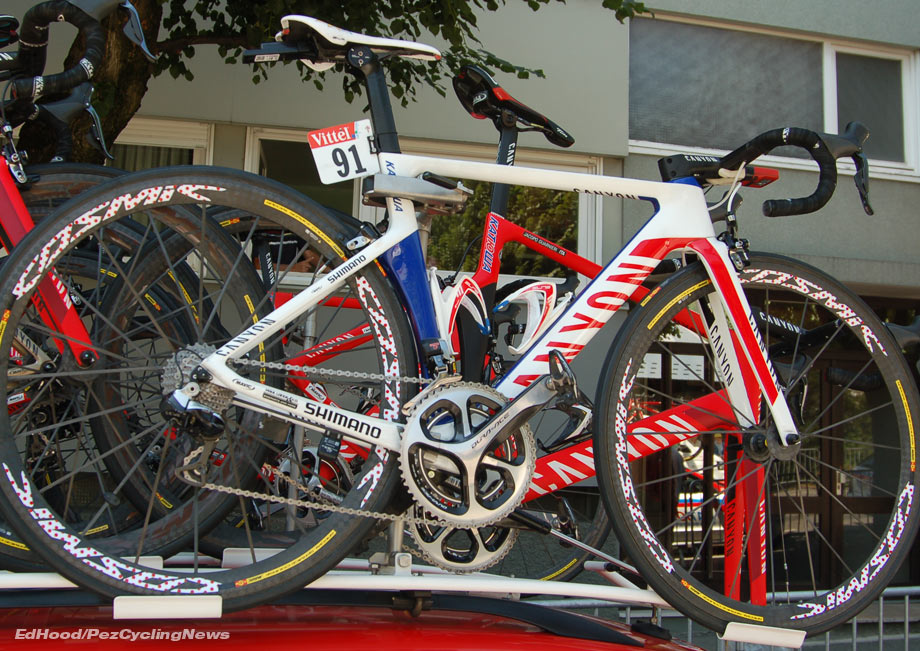 Joaquim Rodriguez is now the rightful wearer of the montagne jersey with 68 points – up until now he’s been keeping it warm for Froome, who led the competition.

The carbon hoops on his Canyon now have red dots all over the white ‘Mavic’ stickers – oh dear !

There’s Cav’s bike, Specialized have gone really radical with the integral brakes on their latest top end offering – bikes look less bike and more like props from sci-fi film as each day passes. 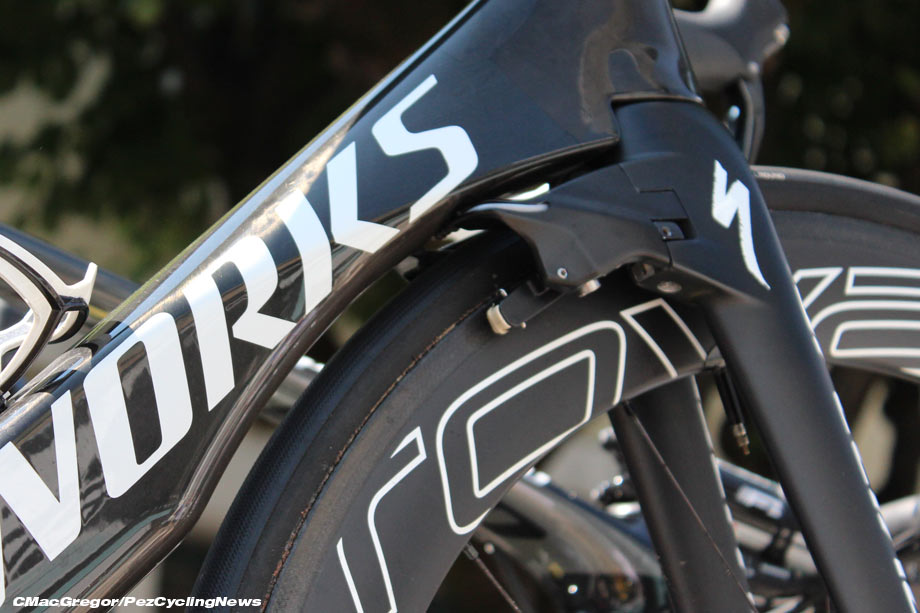 The brakes are fully integrated into the rear of the fork crown and rear of the seat tube.

The front one almost meets the down tube to give the smoothest of air flows around the fork crown whilst the back one nestles behind the seat tube to smooth the airflow.

But enough of machines, we’re here to talk to people – and to that end head for the Village, which sits in the Cathedral Square, a lovely location. 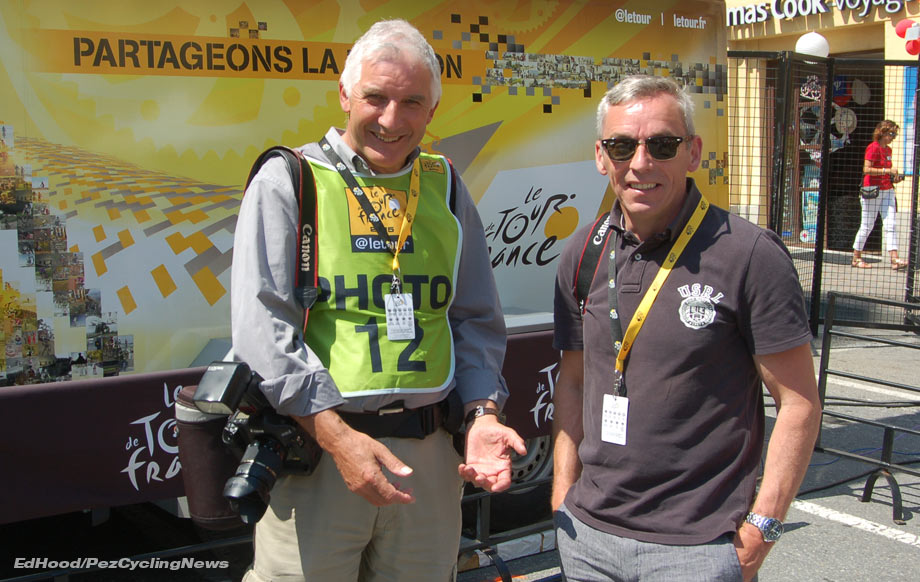 He’s a man of strong opinions and shares some with us.

“Champions are disposable now, like cars, back in the 70’s you fixed your car if it broke down – now you just get a new one. I think that many people have forgotten Wiggins’ Tour win already. And the racing – it’s not the same, these race radios kill it, why don’t they attack ? It’s because they’re being told to wait from the team car – there’s no spontaneity, it’s all controlled. And these carbon bikes and carbon rims aren’t the answer; I was watching riders come off the Glandon and there were few of them taking smooth lines – the bikes are too short, too twitchy and the carbon rims grab – it’s not the same sport anymore.” 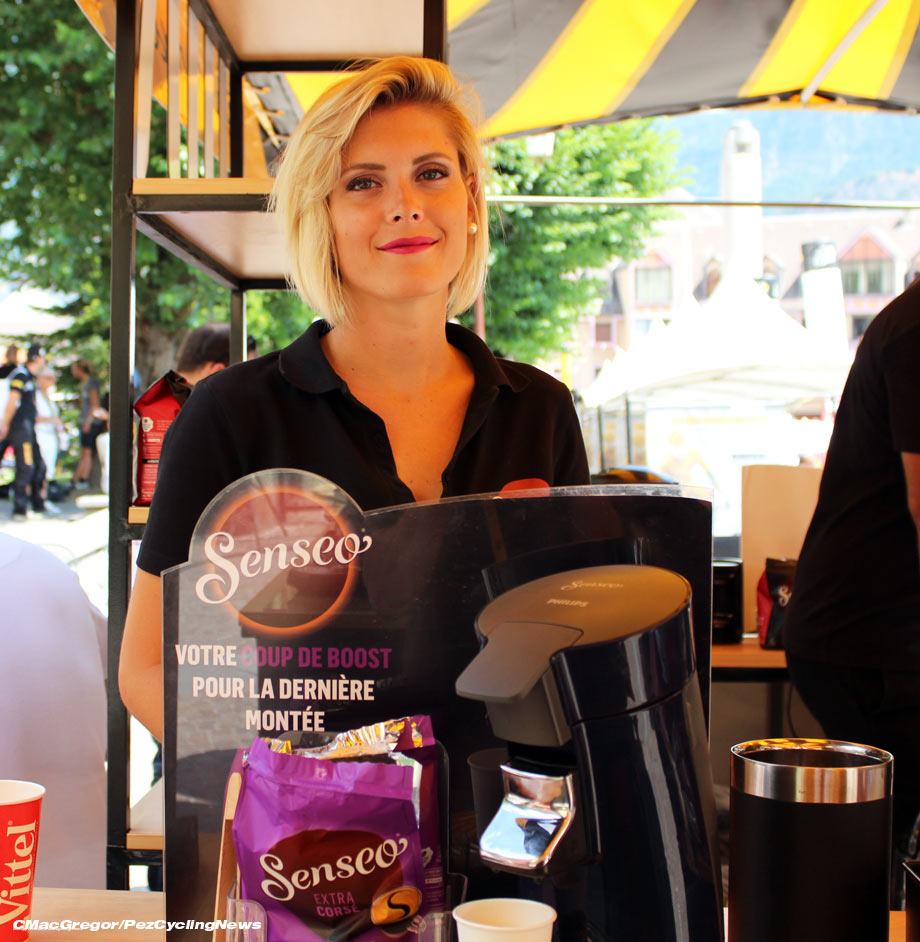 The coffee in the village isn’t as good as it used to be – but who cares with ladies like this dispensing it. 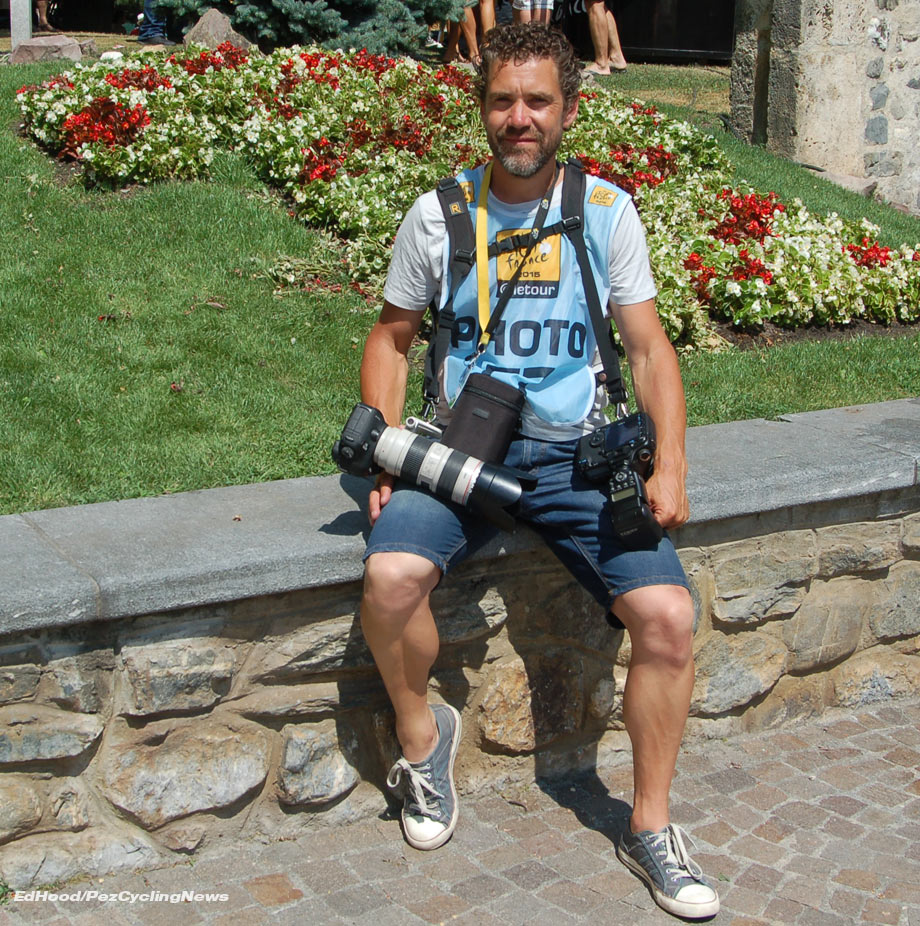 He was a road man-sprinter, does he miss the gruppetto ?

“You know, I look at them racing and just can’t imagine me being in this race, it’s hard to explain. I started the Tour 10 times but only finished three – usually because of the mountains. The rough calculation is that the ‘bus will lose one minute per kilometre – there’s around 40 K of climbing today so they’ll lose 40 minutes. If you’re a classics rider like I was then you have to be careful not to go to deep in the mountains because the next day you’re wasted.” 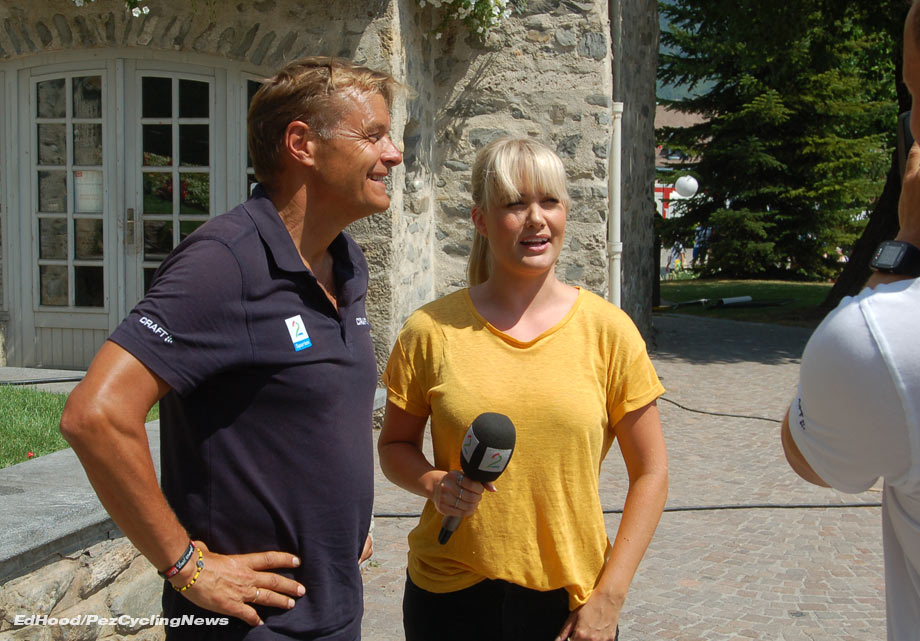 We have a few words with former L’Alpe D’Huez stage winner, Norwegian, Dag-Otto Lauritzen; “yes, there’ll be some good memories for me in the car, tomorrow, for sure.” 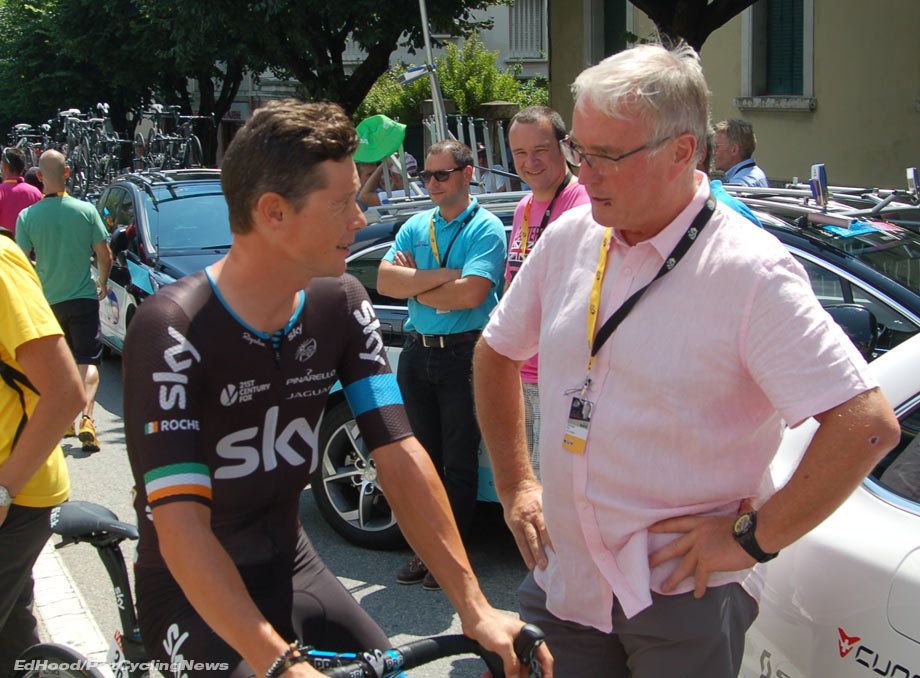 And who’s that chatting to Nicolas Roche ?

“Much less stressful ! I’ve been doing a bit of traveling, getting out on my bike, still living in Switzerland but contemplating a move to Ireland or France.

The Tour ? The first week was really good racing but I think when Froome rode so well that first day in the Pyrenees the rest just gave up. I remember thinking that I hoped that it wasn’t the end of the race for yellow – but it looks like it may have been !” 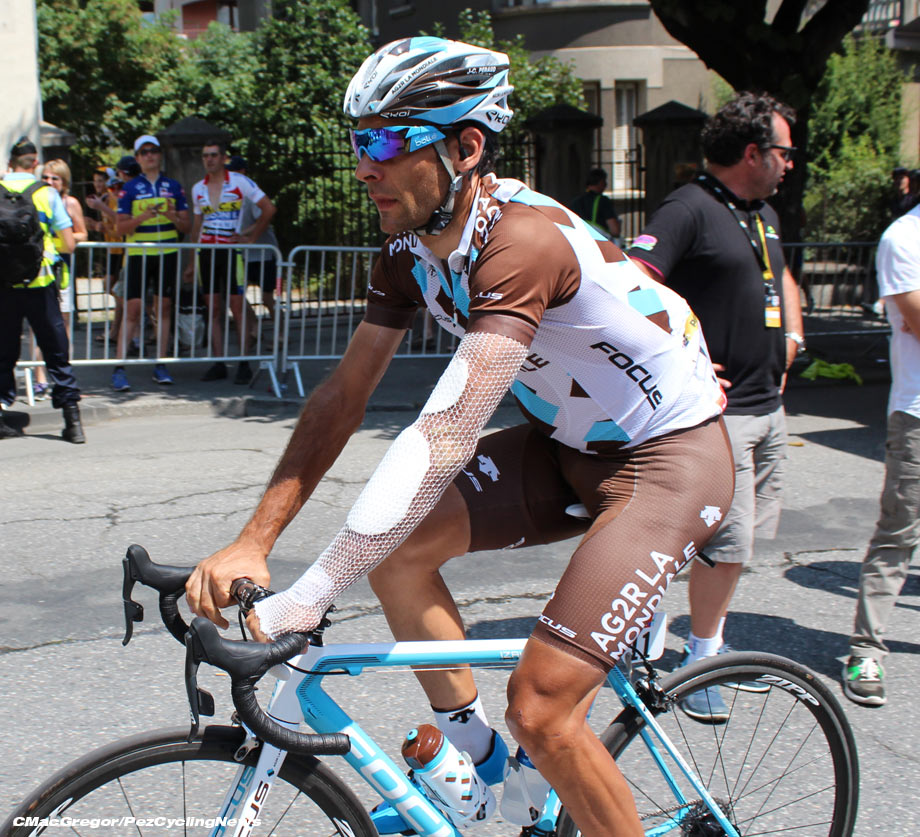 Jean-Christophe Peraud pedals past – he’s been through the wars and the glory of last year’s podium is history, now. 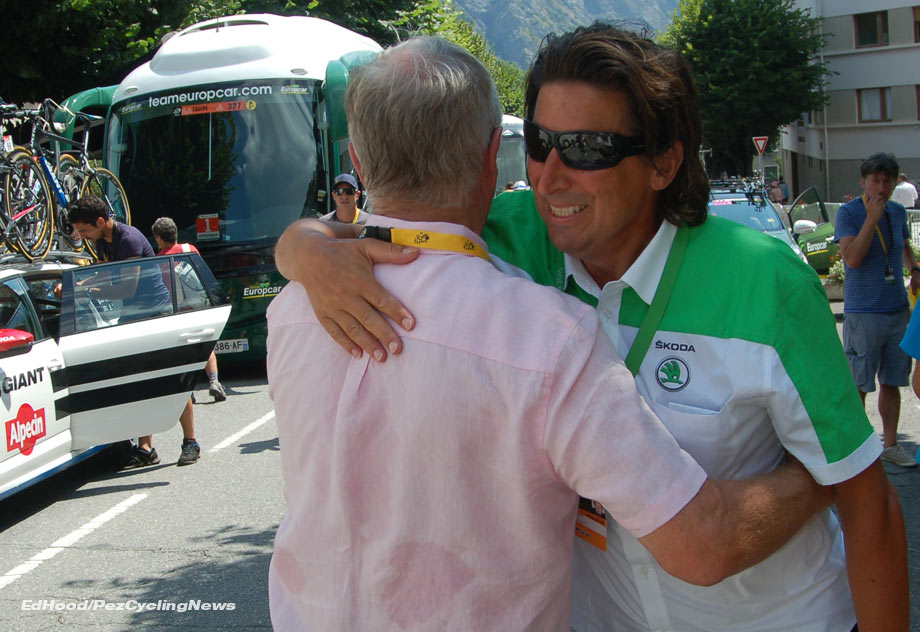 Tim Harris was British Professional Road Race Champion and now drives ViP’s around the stages for ASO in a sleek Skoda; he thinks it’s been a good Tour and today’s the day for Movistar.

“Yes, definitely, Quintana has been riding within himself and today is the day they make the big move !”

We can’t agree, Movistar have Quintana and Valverde on the podium, the white jersey and the team, they won’t risk all of that . . . 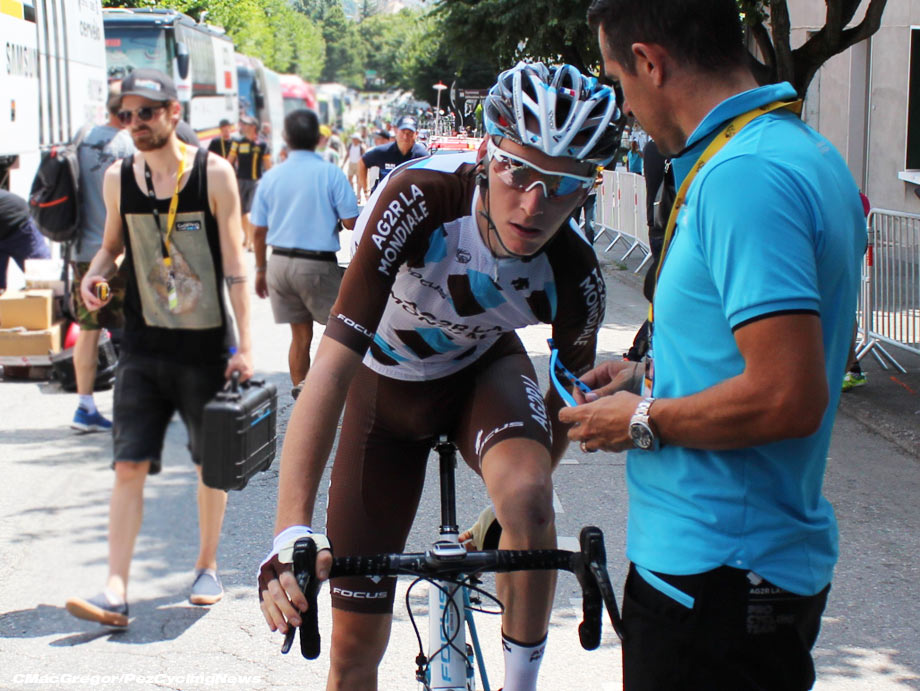 And on the subject of risk taking, Bardet is deep in conversation with his DS; it looks like he’s being asked to go on the offensive again today and doesn’t fancy the idea. 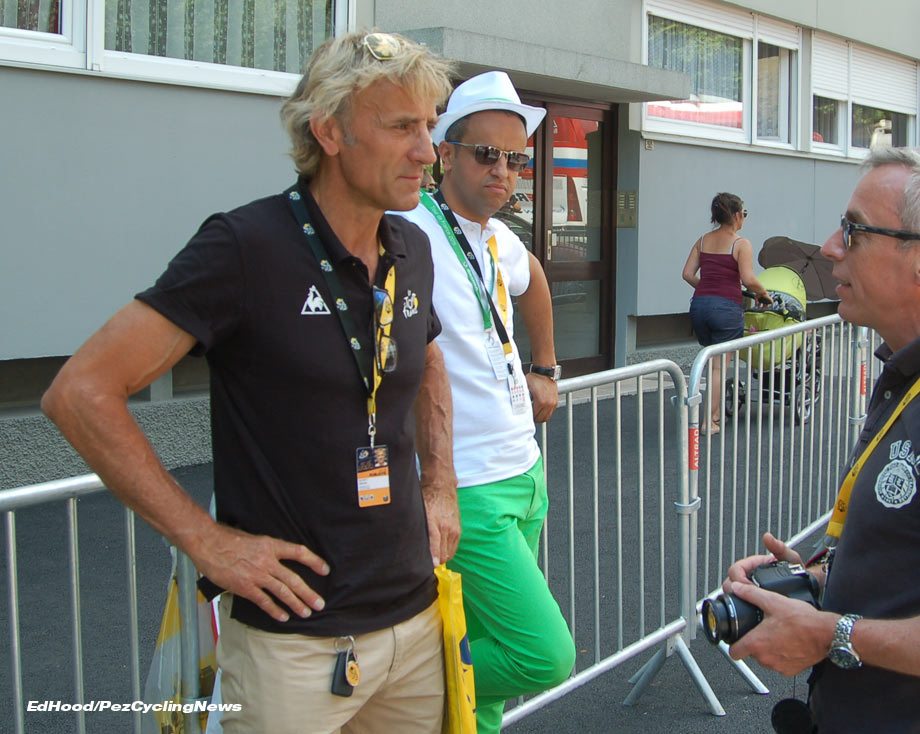 Malcolm Elliott stills looks fit – a former stage and points jersey winner on the Vuelta, he was a multiple winner on the British and US scenes – even coming back as a veteran to show most of the young Brits how it should be done.

He rode the Tour for the now legendary ANC team in 1987.

“It’s all a bit of a blur to be honest, the stages all kind of run into each other – it was a long time ago. I’m driving ViP’s for the Tour organisation now – after they get to speak to Roman Kreuziger if he decides to come out of that air conditioned coach and have a word with them, that is !” 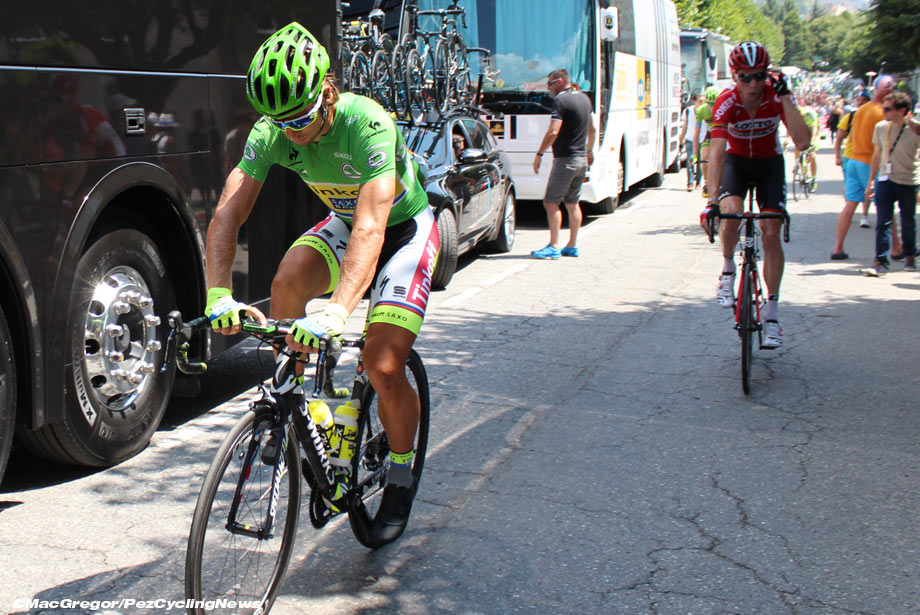 Sagan ambles past whilst struggling with the buttons on his power meter.

He’s now 100 points plus clear in the green jersey competition. 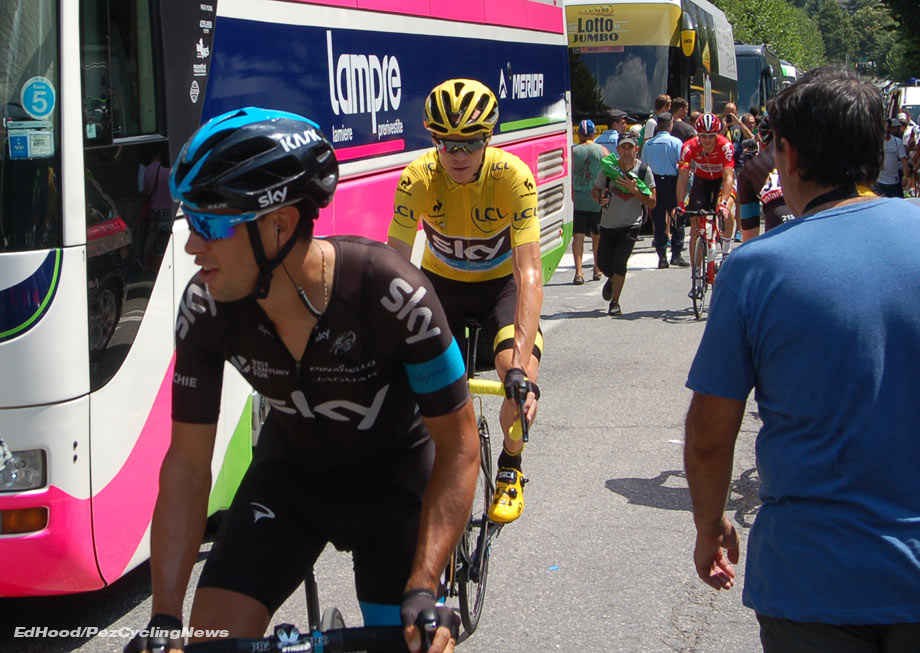 Then the maillot jaune appears from the throng; he’s even untidy riding to the start – and black socks ? 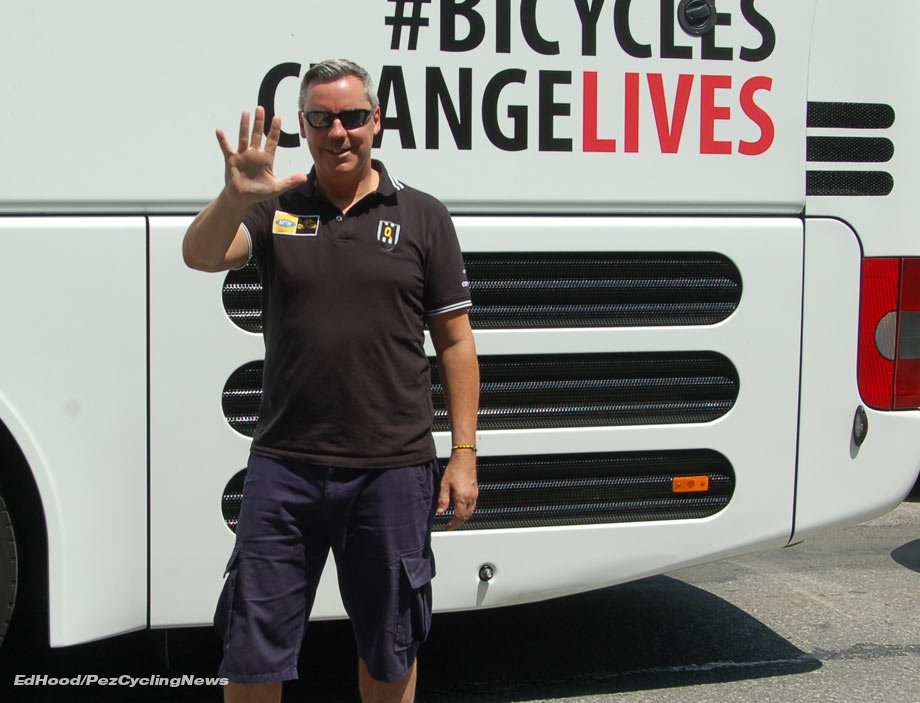 Brian Smith, the MTN manager is having a great race with Steve Cummings’ stage win, Daniel Teklehaimanot’s spell in polka dots and they’re still second in the team race, ahead of Sky.

Unfortunately they lost Louis Mentjies to illness after stage 17 with the South African spending two nights in hospital.

Brian agrees with our assessment that Movistar will take no chances and whilst Quintana and Valverde are strong their henchmen – like most riders still in this Tour – are on their knees. 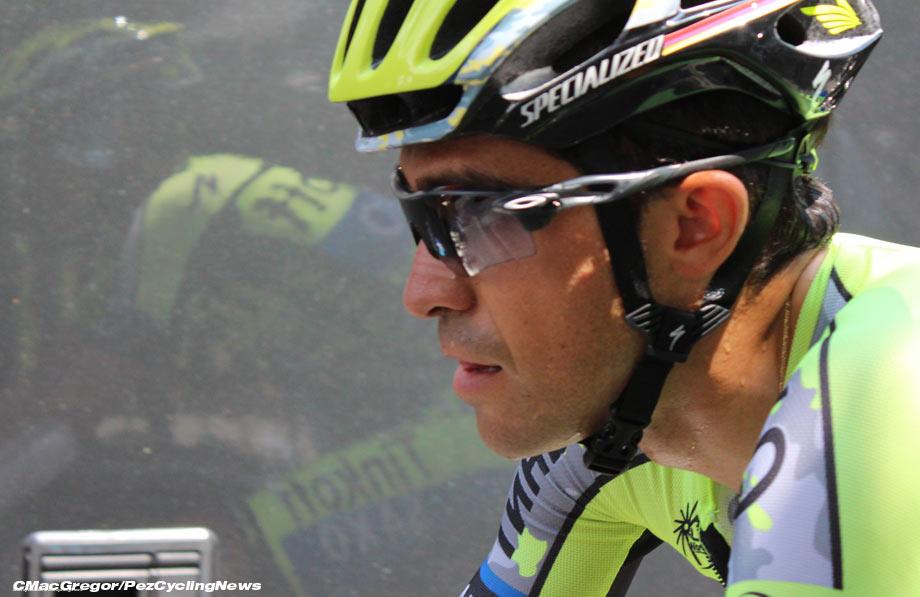 No smiles from Alberto, grim faced he heads up to the start – he’s a proud man and the way this race has gone will have hurt him. 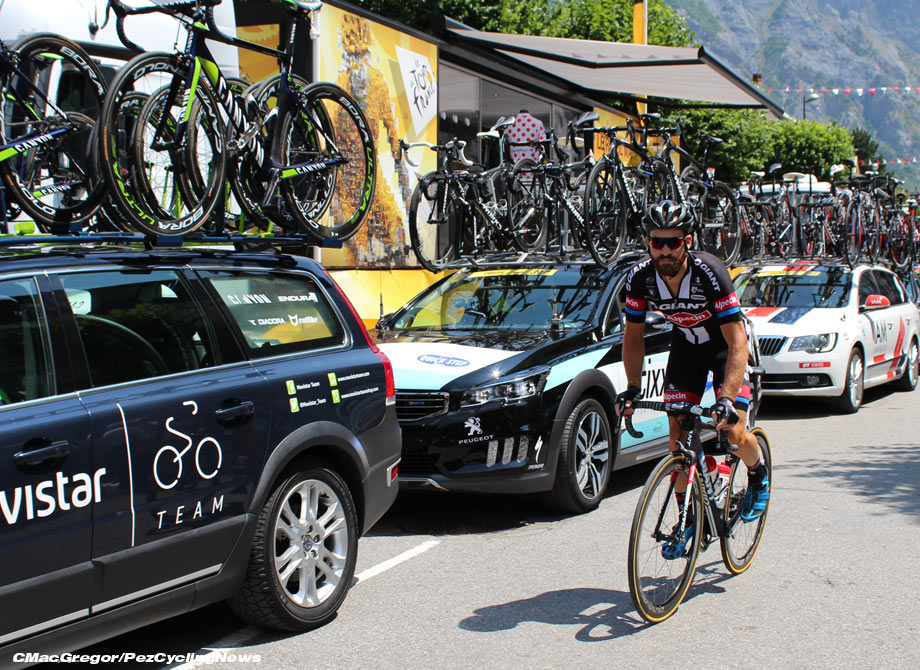 We’ve run out of time as the cars line up and the stray sheep head for the back of the peloton – not a good place to be in a race which has been going from the gun.

Destination La Toussuire, will it all change today?