Race Report: The first proper day in the mountains and the 2015 Tour de France has been blown to pieces by Chris Froome with a storming ride in the Pyrenees. The overall hasn’t changed much from yesterday, but the time gaps are now minutes and not seconds. Is the Tour over with the first punch? Let’s hope not.

On the final climb of the day, Movistar were in control and sent Valverde on the attack, but Sky had him in their sights and once the Spaniard had used his power, Froome was off and away. All the other top men were in trouble and losing time on the man in yellow, only Quintana managing to keep him to a minute. Richie Porte was Froome’s right hand man and also managed to take second from the Colombian. Everyone else were losers, the biggest Vincenzo Nibali over 4 minutes down.

Stage 10 is not where the 2015 Tour de France will be won, but it could be where it’s lost. The opening mountain stage of the Tour is always a day full of expectation and sometimes disappointment and always fear. This year it comes after 9 days of supposedly flat stages and a rest day, the good news is that the first 140 kilometers from Tarbes are fairly easy. The first climb of the day comes after 66 kilometers, Cat 4 Côte de Bougarber and at 257 meters shouldn’t worry anybody. The second and third climbs are also Cat 4; Côte de Vielleségure after 90 kilometers and the Côte de Montory at 134 kilometers, both these are just a warm up for the finalé; the climb to La Pierre-Saint-Martin.

La Pierre-Saint-Martin will be an invitation for all the climbers to attack. It has a particularly steep first half (2nd and 9th kilometers with more than a 10% gradient), The riders will climb 1,301 meters in around 16 kilometers… blow on this road and a lot of time could be lost. It’s going to be hot, weather and racing. 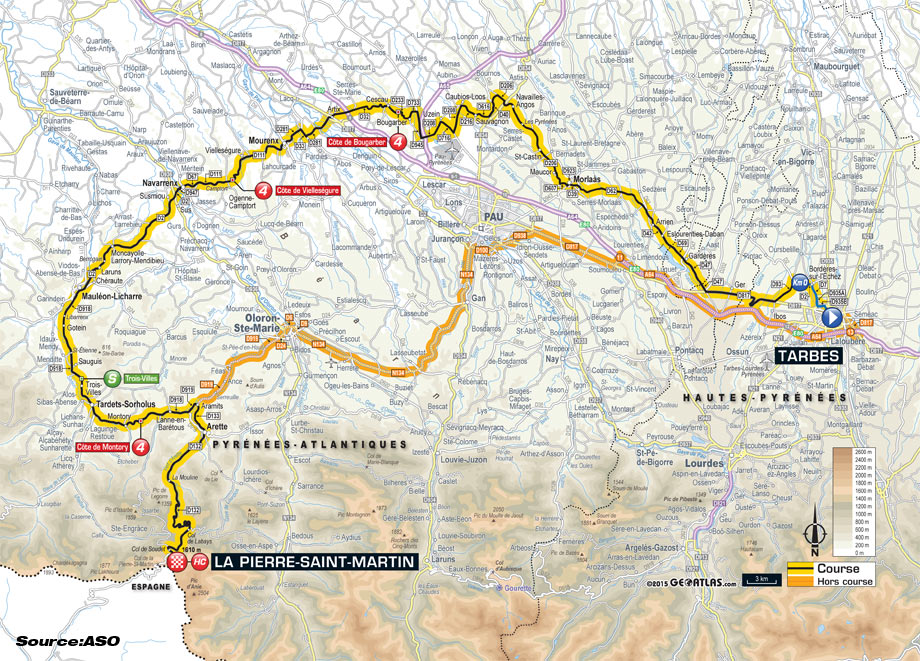 Two non-starters today; Ivan Basso (Tinkoff-Saxo) who announced yesterday that he has testicular cancer and is returning to Italy for treatment and Lars Boom (Astana) who has the flu.

The action
First attack of the day came from Pierrick Fédrigo (Bretagne-Séché Environnement) and as it is Bastille Day, the French will want to show at the front. Kenneth Van Bilsen (Cofidis) set off after Fédrigo, but it took a lot of effort and Van Bilsen didn’t make the catch until the 45 kilometer mark and by that time the pair had over 11 minutes on the peloton, which was quite happy to let them go. The lead got even bigger and was near to 15 minutes before Sky along with Movistar lifted the speed.

A crash to Warren Barguil (Giant-Alpecin) in the feed zone looked bad and he took a long time to remount. Remount he did but needed to spend a lot of time with the doctor’s car with a bad knee injury. With nearly 80 kilometers to go, he will have a battle closing the 3 minutes he lost lying at the side of the road. Ramon Sinkledam came back to help him and eventually they rejoined the peloton.

With the big KOM points on offer for the final climb, there should be a new wearer of the polka-dot jersey, unless Daniel Teklehaimanot wins the stage, of course. The lead didn’t drop very quickly and with 53 kilometers to go Van Bilsen and Fédrigo still had 11:20 in hand, Movistar were still the work horse of the peloton.

At the intermediate sprint; Fédrigo rode through for the points, which was only fair, as Van Bilsen had taken the mountains points. The peloton came to the sprint 8 minutes later; Giant-Alpecin had four riders making the pace for John Degenkolb, but Peter Sagan (Tinkoff-Saxo) was on his wheel with André Greipel (Lotto Soudal) and Mark Cavendish (Etixx – Quick-Step) in line. Degenkolb jumped, but it was the big German who took the points for third ahead of Cavendish, Lotto Soudal’s Jens Debusschere and Sagan. This should put Greipel back in green at the end of the day. After the sprint FDJ.fr took over control of the peloton as the lead was coming down and was down to 6 minutes with 33 kilometers to go and the mountains were looming large on the horizon. 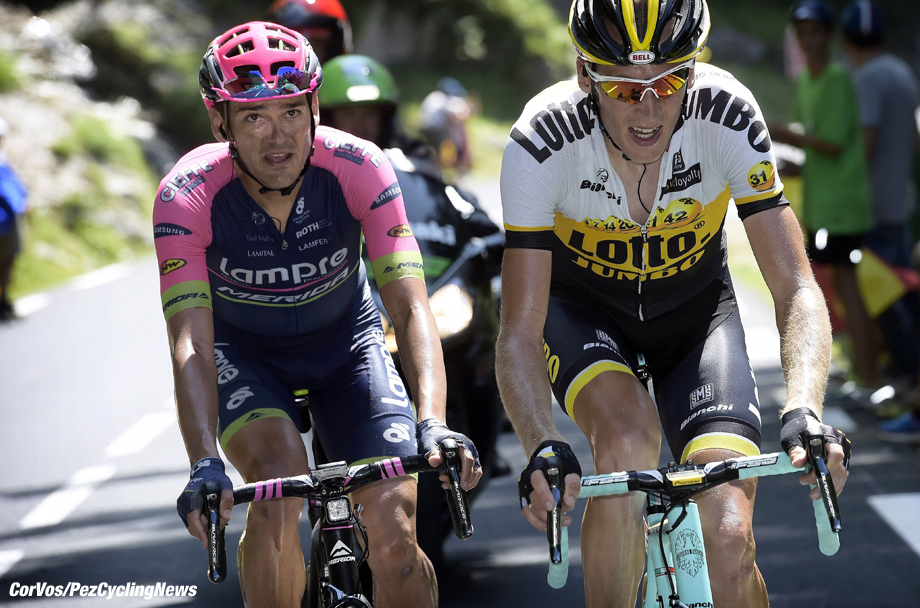 Van Bilsen took the 1-point on the Côte de Montory with a lead of 5:28 on the bunch, which was more interested in collecting more bottles for the fight ahead. The temperature was at 27ºC with a humidity of 55%. With 10 kilometers to go to the base of the climb to La Pierre-Saint-Martin, the lead was getting near to 4 minutes and Europcar were lending a hand as the GC teams were bringing their leaders to the fore.

20K’s to go
The front of the peloton had changed with Sky, Tinkoff-Saxo, Cannondale-Garmin, Movistar, IAM Cycling and Lampre-Merida pushing to through, this of course lifted the speed and the lead pair was on borrowed time. 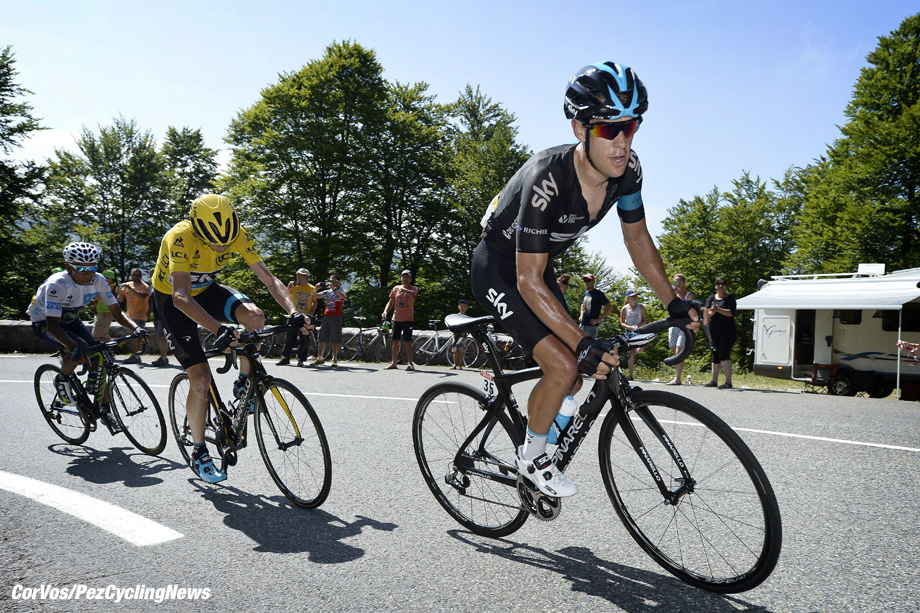 Richie Porte rode a stong race for Froome and for himself

The last climb
15.3 kilometers to the finish line to go and Movistar were the prominent jersey at the front as Mark Cavendish was prominent going out the back. Van Bilsen couldn’t hold onto Fédrigo and put his bike into reverse.

Movistar had five riders on the front with Quintana and Valverde tucked in and waiting to make a move. The back of the peloton was shredded as the speed was shaking rider after rider drop off, surprisingly Cannondale’s Talansky and Martin, plus Roman Bardet (AG2R-La Mondiale), Scarponi (Astana) and Pinot (FDJ.fr).

Just before Fédrigo was caught at 11K out; LottoNL-Jumbo’s Robert Gesink slipped off the front with Rafa Valls (Lampre-Merida) chasing him. Next in trouble was Rigoberto Uran (Etixx – Quick-Step) and last year’s Tour winner, Vincenzo Nibali (Astana) as they hit the 10 to go mark.

Valls got across to Gesink and next in trouble was Joaquim Rodriguez (Katusha) and Nibali was going nowhere. Sky now put the hammer down as they sent three riders ahead of Chris Froome. The front group was now down to around 20 or so riders. Gesink squeezed another kilometer per hour and dropped Valls as behind Valverde attacked into a sharp bend, although it didn’t last and he was pulled back by Sky. 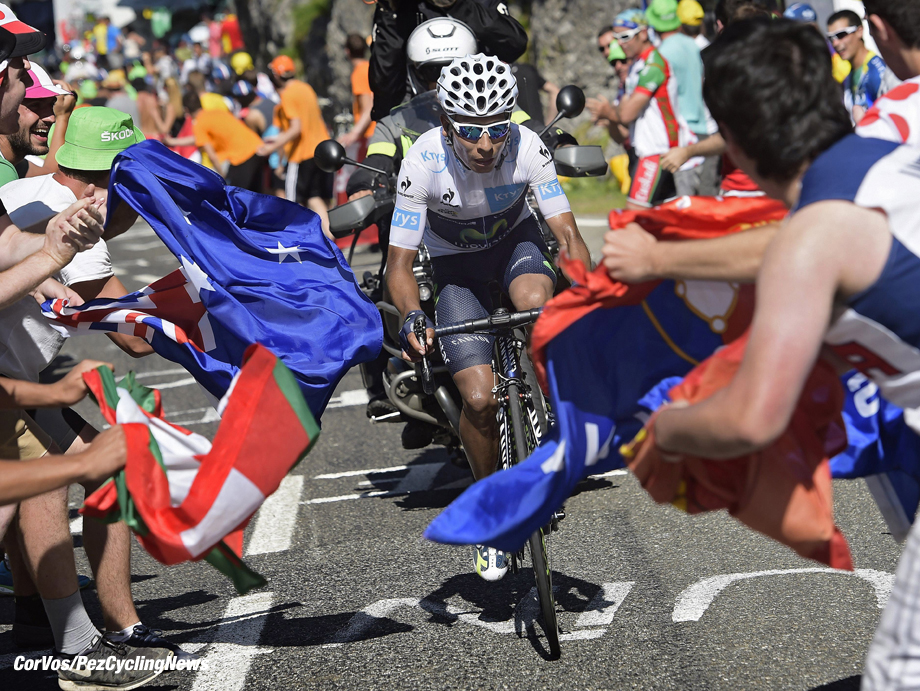 Quintana fought hard to hold Froome to a 1 minute advantage

Gesink pushed on off the front with 20 seconds and 8 kilometers to go. Valverde wanted to keep the pace high as it look as though Froome was in trouble. Sky kept the pace level and pulled Valverde back without troubling Froome too much.

Richie Porte put a big push on and dragged Froome, Van Garderen and Quintana away from Valverde and Alberto Contador. Froome looked all in, but was he only fooling? Yes, he attacked and left the others in pieces behind him. Nairo Quintana gritted his teeth to keep the gap to the Sky rider manageable, but ultimately could only watch and try to limit his losses as Froome rode away. Gesink had been passed by Froome, Quintana and Porte during the battle and with 5 kilometers to go Froome had 24 seconds on Quintana, 54 on Van Garderen, 1:24 on Contador and Nibali was over 3 minutes back.

As the kilometers counted down the gap for Froome just got bigger. Into the last 3 and the Kenyan born rider had 50 seconds on Quintana (Porte just behind) with a group containing Van Garderen, Rolland, Valverde, Yates and Thomas at 1:37 and Contador at 2:05. Nibali was a forgotten man. 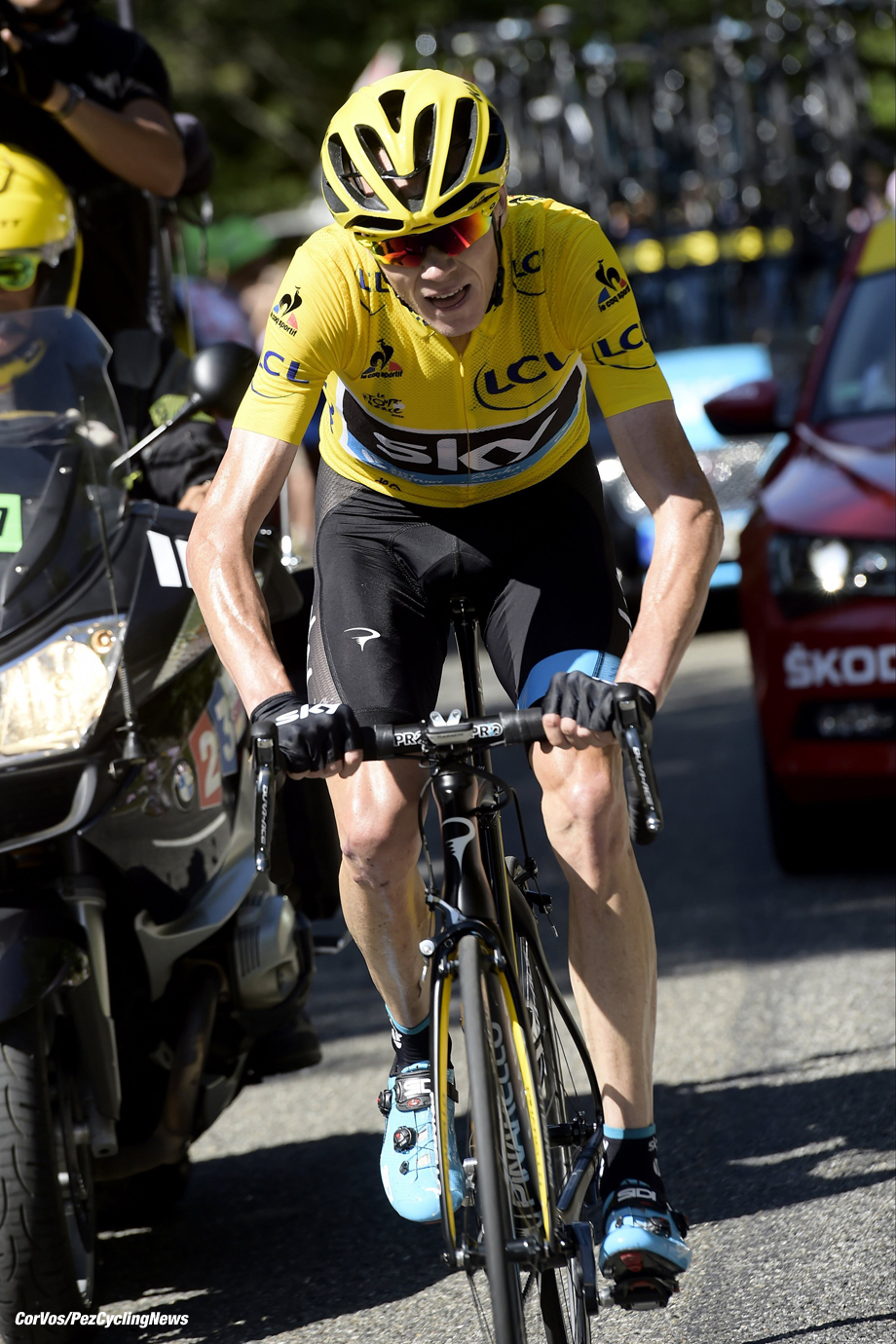 It was Froome all the way

Last K
Chris Froome was hammering the pedals on the flatter final section and his lead getting bigger overall his adversaries. Porte was catching Quintana.

Froome sprinted to the line and threw both arms in the air. Porte pulled level with Quintana and then jumped him for second place. Quintana across next with a great ride from Gesink in 4th. As expected Valverde brought the chase group in at 2:30 with Van Garderen tailed off slightly and Contador at 2:50. 2015 Tour winner, Vincenzo Nibali was over 4 minutes down and looking less than happy.

Keep it PEZ for a Tour photo report coming soon.