Roadside Stage 17: The best laid schemes o’ mice an’ men gang aft a-gley.. and that’s the same for Tour de France journalists if they want to drive over the Col d’Allos on stage 17. Never to be out done, Ed always has a ‘Plan B’ at his finger tips. Where there is a bike race there is a story to tell pictures to take. 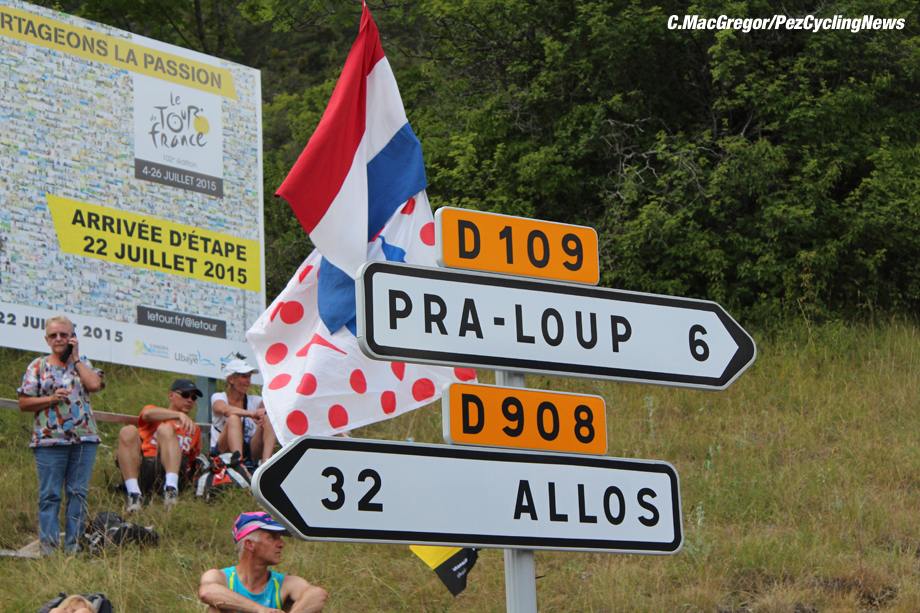 Merckx lead over the Col d’Allos and descended like a demon, he led on to the Pra Loup climb but that day, July 13th 1975, saw the Belgian suffer, ‘une énorme défaillance’ – we’d say, “blow up horribly” and cool, handsome, ever-smiling Bernard Thevent was there to put his revolver to Eddy’s temple and administer a ‘coup de grace.’ We’d never see the same Eddy again; as a Merckx fan for 45 years, I can’t go up there. It would be profane. 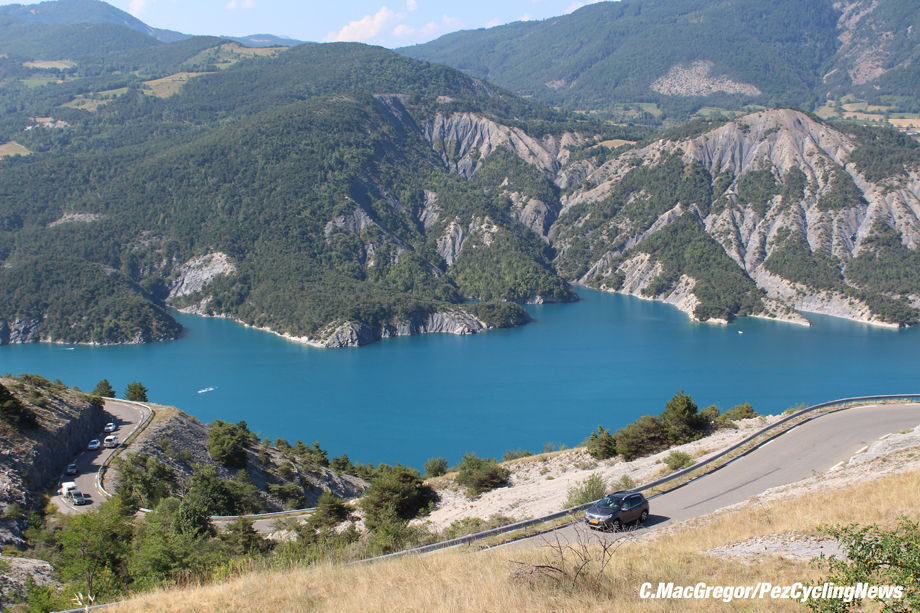 The scenery on the way over is fabulous with views over impossibly blue lakes. Happily en route to the Allos, the BlackBerry beeps; “For the stage 17, the riders of Le Tour de France will climb the Col d’Allos. Because of the weather conditions and in order to keep a good quality of the road all the vehicles with a blue sticker will have to take the off-race itinerary”

Guess what colour our sticker is! Maybe they could have told us last night?

We walk up the Allos first for a while, just to get a feel for it – narrow, technical it drops steeply, 90 left and straight into Pra Loup with zero flat between. 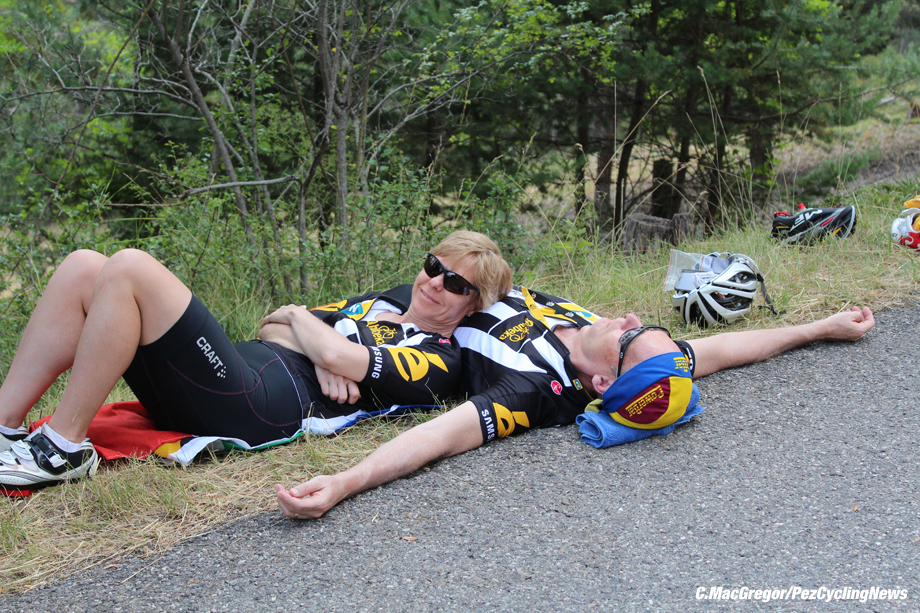 Not everyone is paying the descent the same attention, though . . . 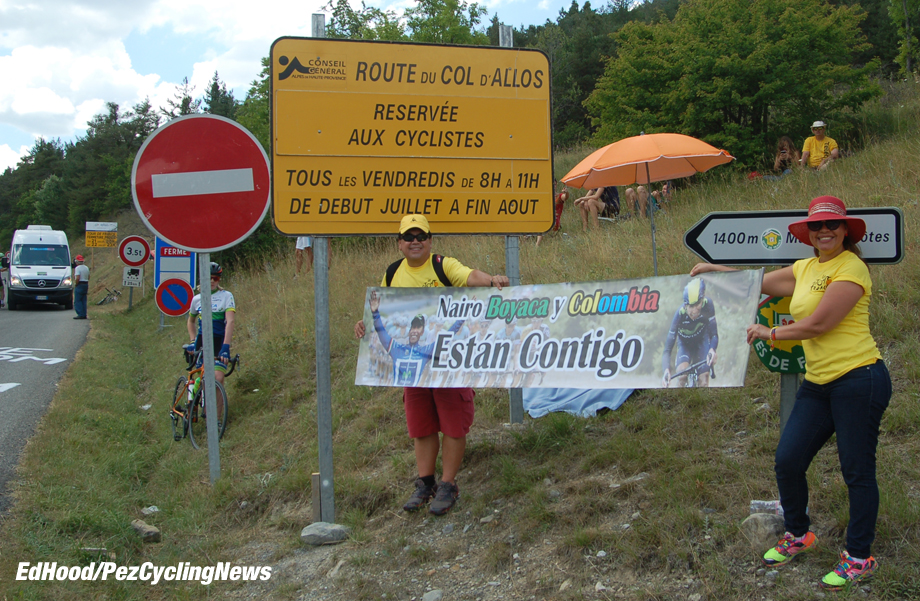 The Quintana fans are massing at the bottom – is this his day? Maybe – but all the signs to us are that it’s a Froome Coronation Procession to Paris. Most guys are so far down that it’s easy for Sky to let the right break go then mark the few who could challenge him. Tejay follows, Quintana’s environment was meant to be the Pyrenees whilst Nibali and Contador have sent look-a-likes to the race.

Garmins coming off the Allos – and the young one has pro’s legs ? 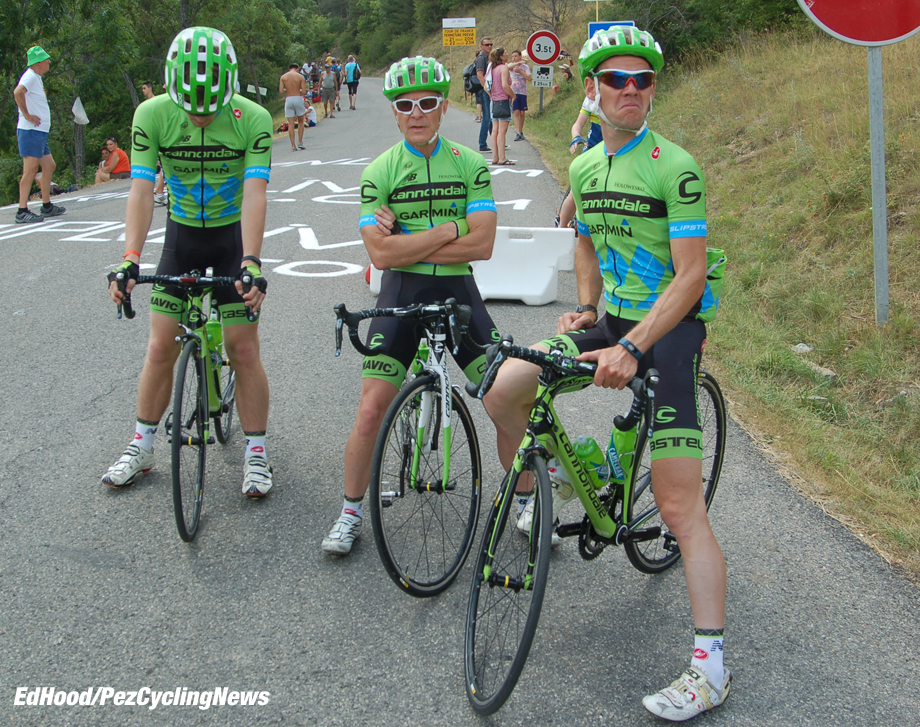 It’s Dylan Van Baarle with a couple of ViP’s – we try to chat but he’s pre-occupied with his charges and it’s not much of a conversation – but he does say; ‘cheerio!’ 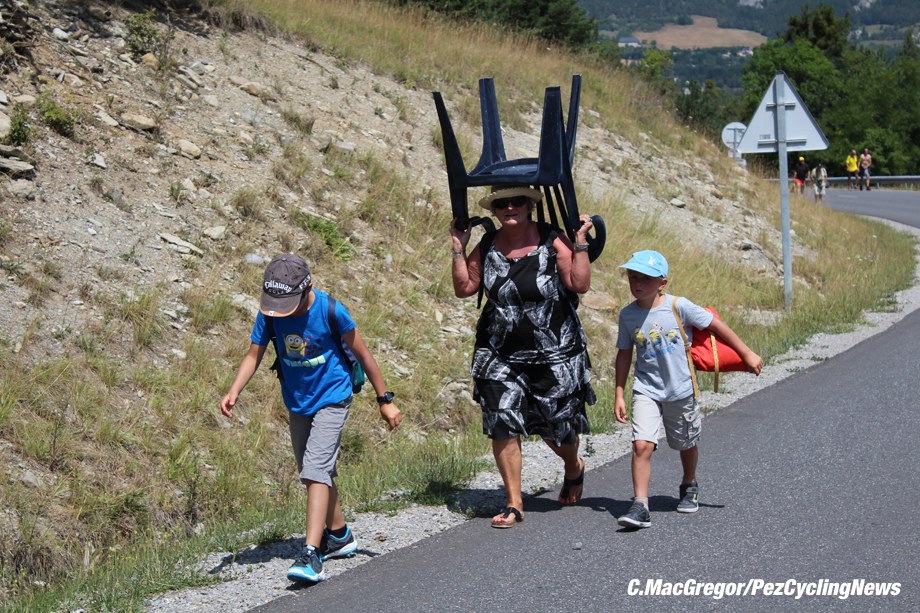 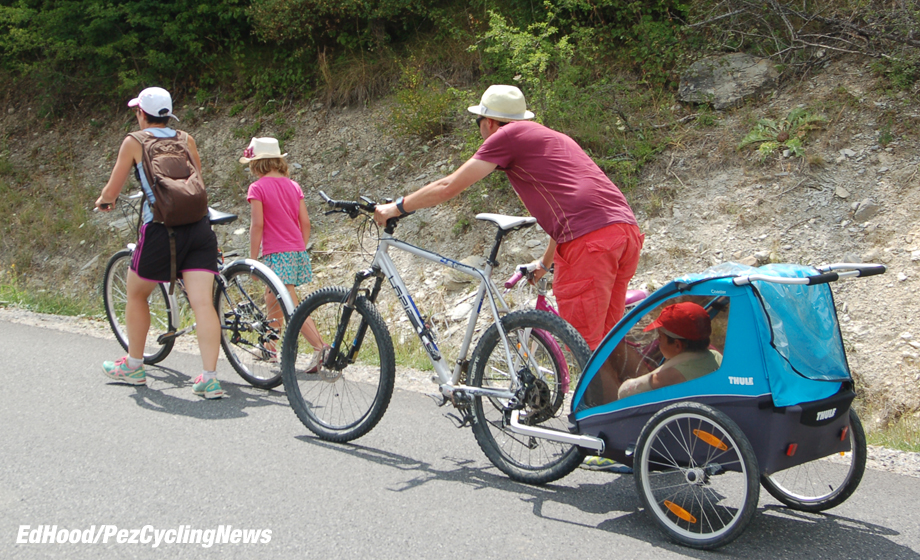 The stream of people up the hill is relentless, the road has been locked down for hours and the only way up is to walk or pedal – kids, dogs, tandems, MTB’s and ladies on electric bikes giving guys on carbon Canyons a hard time. It’s hot, damn hot, real hot and when the odd, cool mountain breeze caresses you, it feels devine. 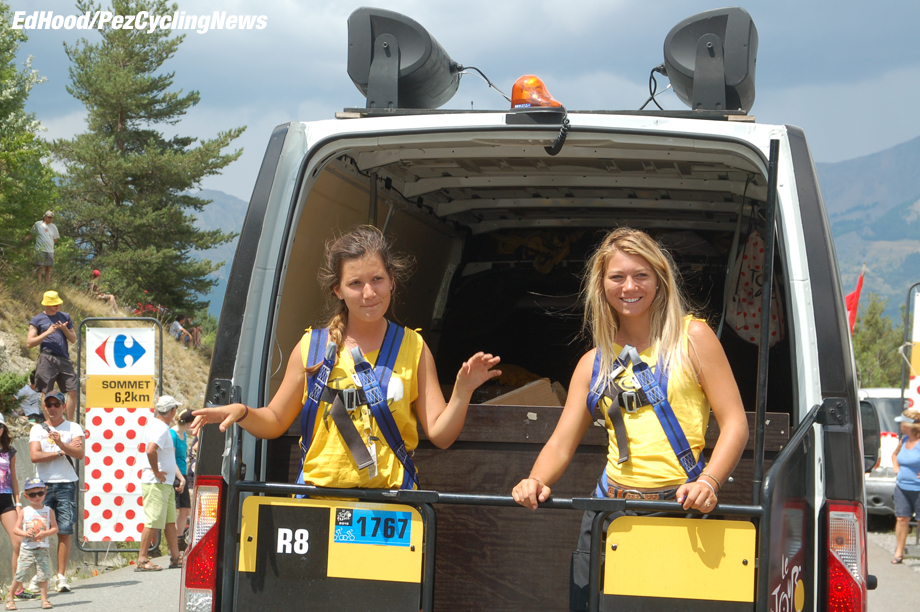 And they’re still two hours away – but there’s always the L’Equipe lovelies to look at.

We chat to Giant management team member, former Netherlands Pro Road Race Champion; Rudy Kemna – he’s on ‘support’ today and has two in the break – Degenkolb and Geschke but doesn’t have the latest news from over the col. To add to my three million caravan pictures – I HAVE to take a pic with those mountains in the background . . .

The sun is high and has no conscience about roasting us as we settle back down on the tar – but hey! 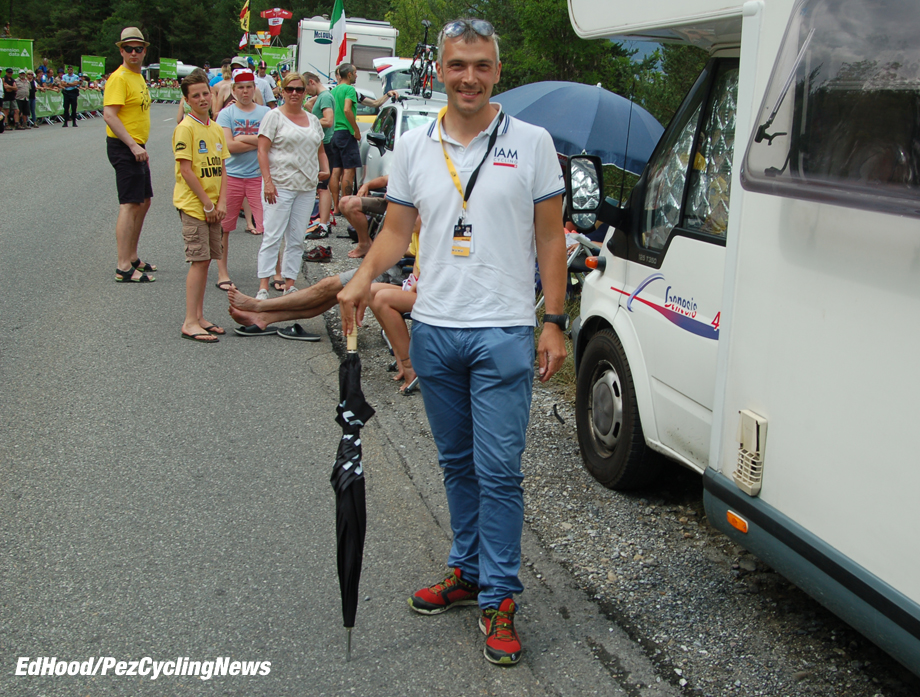 We know this guy; Rubens Bertogliati, still with IAM on management – today he’s looking after the ViP’s – and within three kilos of his racing weight. I wish I could say that!

Good news for Rudy – Simon Geschke has gone clear of a big breakaway but the ever-present Sagan is in that break. The word comes through that Pinot is closing on Geschke but has fallen – as would Contador, later. It sounds like mayhem out there.

Usually when the head of the race approaches you get plenty warning; not today. No police bikes, no warning just the crowd diving out into the road and Geschke is on us – bang ! 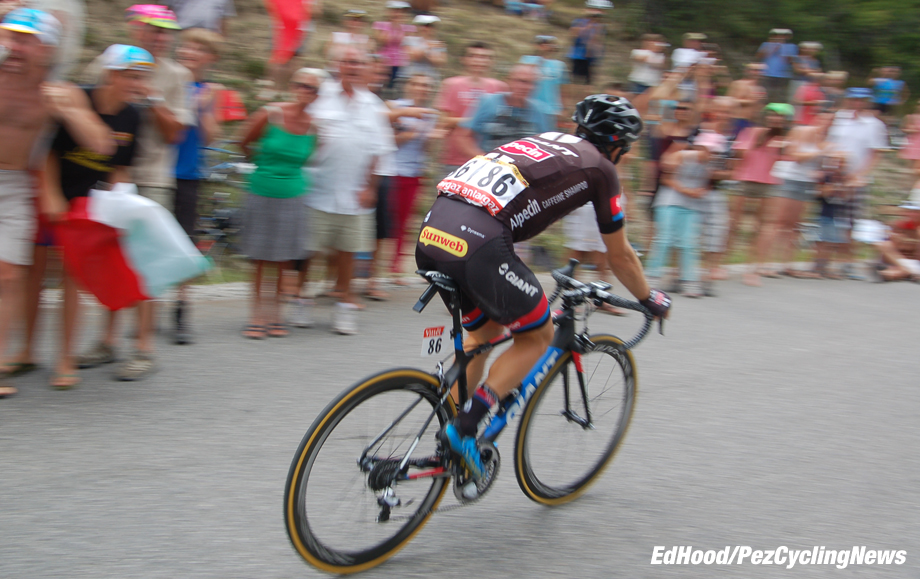 I grab a shot but he’s past me before I know it. The gap is good – he can win this? 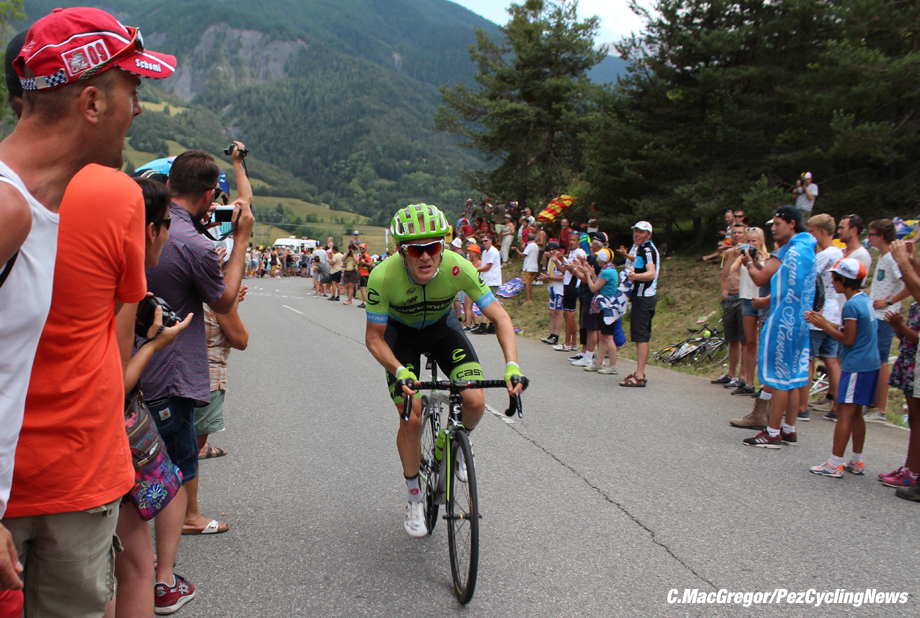 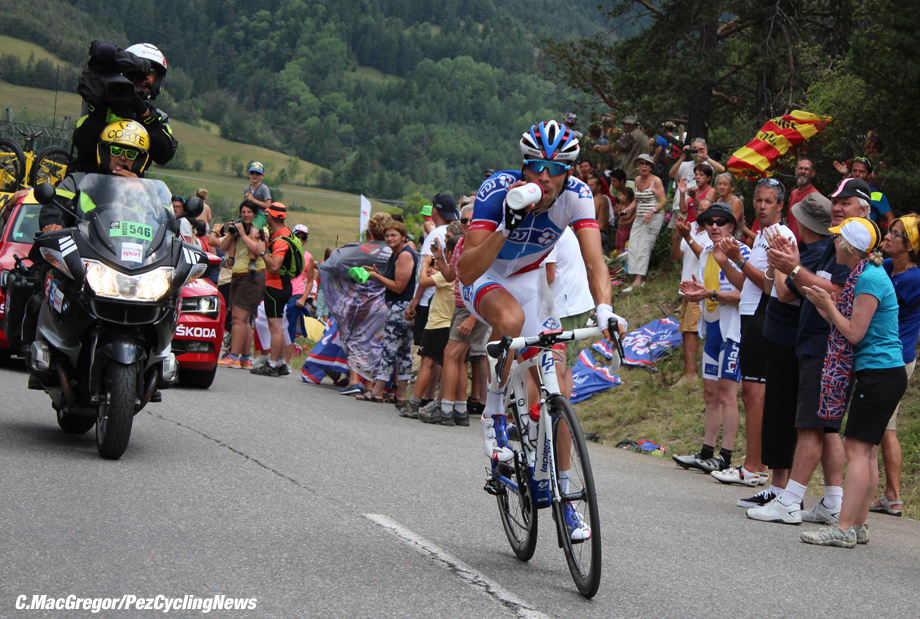 We expect Pinot but get Talansky then Uran with Pinot fourth. 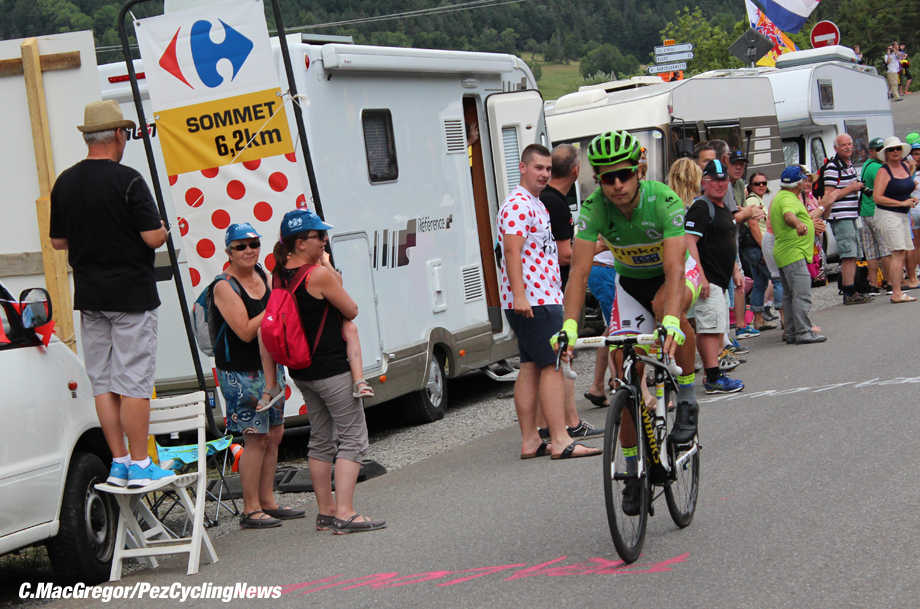 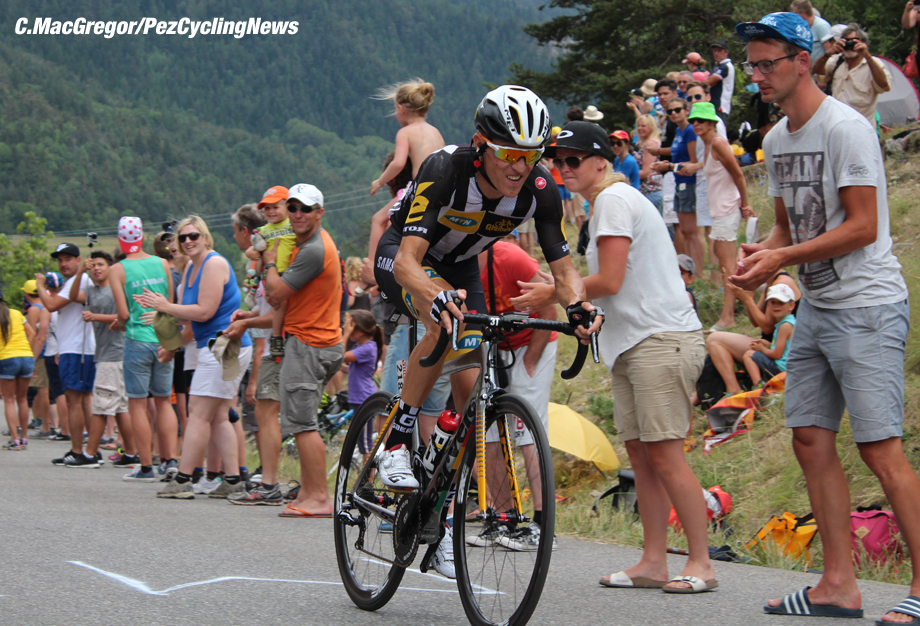 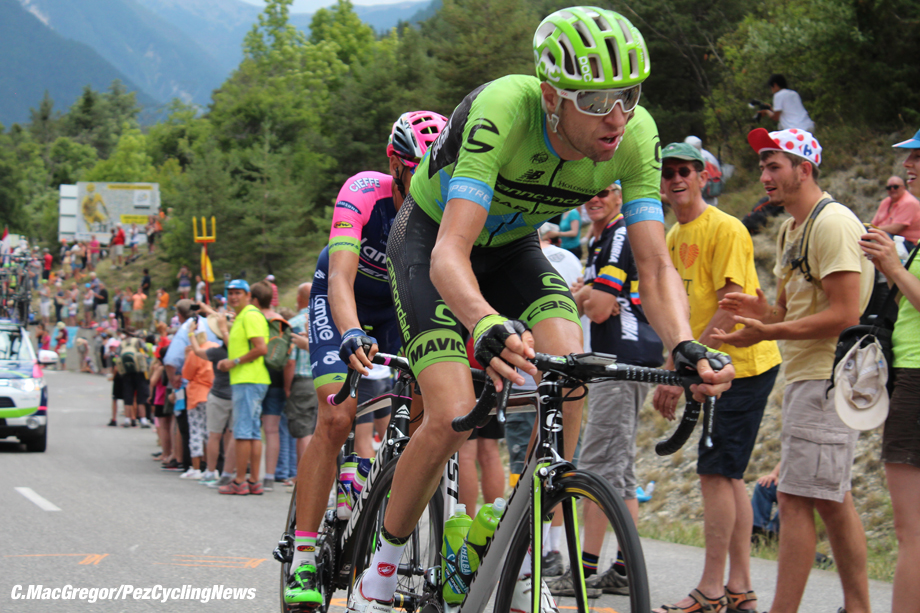 After that the survivors of the break sprachle through, ones, twos, half dozens – the big move was originally 28 strong – and there’s Pauwels, Hesjedal, Sagan . . . 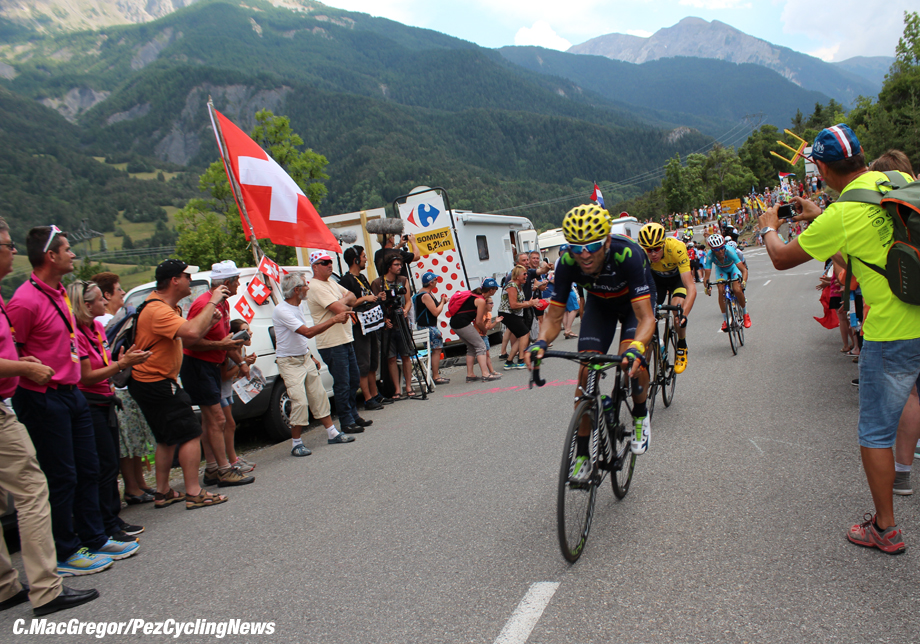 The maillot jaune group is no longer at 10 minutes as it was not so long ago; they’re ‘full gas’ – they want Contador buried and we’ll be denied a possible Alberto fight back. Nibali is in there, Quintana, Valverde . . . 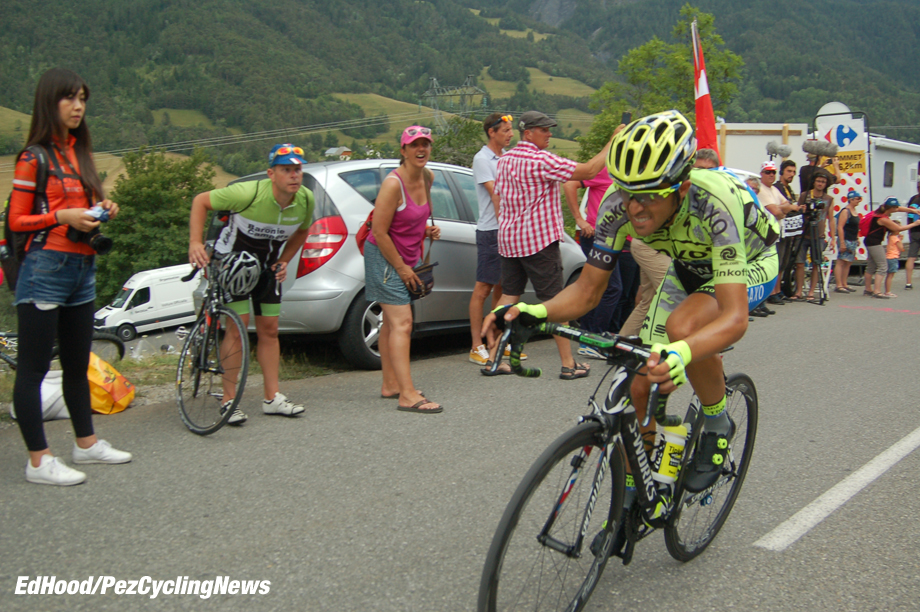 After that the gaps are big and the groups still small – that drop off the Allos isn’t for big groups. 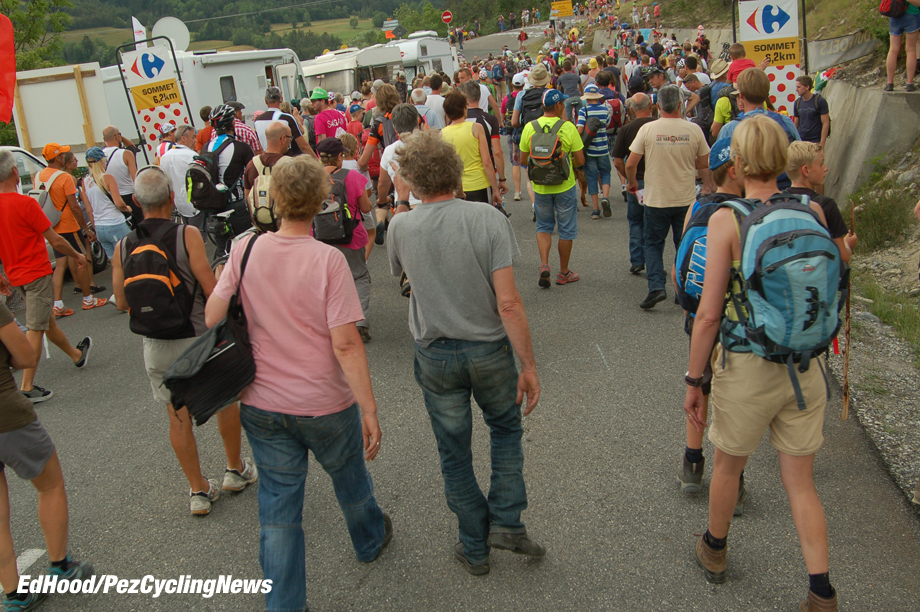 What never ceases to astonish us is that once the top 20 or so go through the exodus off the climb starts. The police try to control it but in vane; a tide of humanity floods down the ribbon of tar but there are still coureurs out there fighting the mountain. Rodriguez is in polka dots – Froome is the rightful wearer but has another garment for the day – but way down, riding up through the hosts trudging and freewheeling of the hill. The Spaniard will be harbouring his strength for one more special day we’d wager – Saturday on L’Alpe?

PEZ never leaves the hill ’til the last man has passed – he deserves respect. 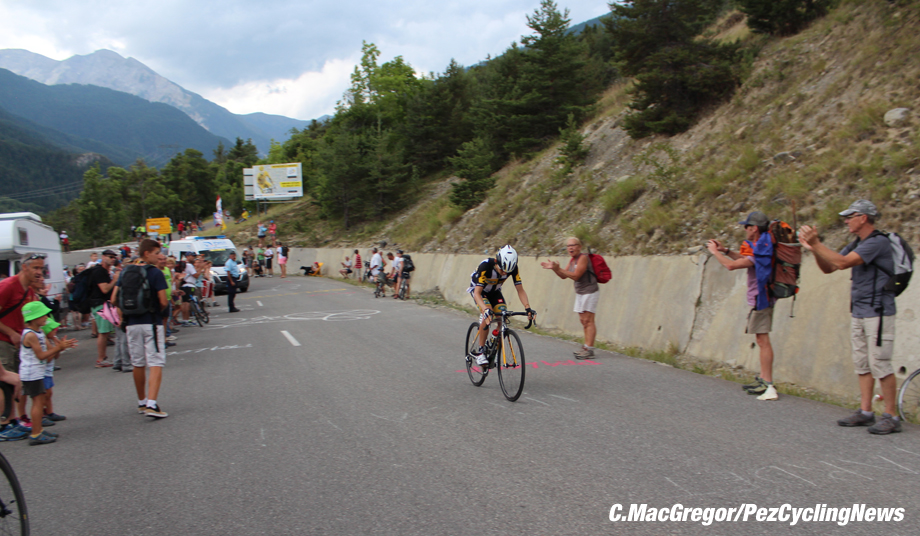 It’s an MTN rider Louis Meintjes, he’s had stomach problems but will beat the time cut by three minutes. Along with Europcar, IAM Cycling and LottoNL-Jumbo, MTN are the only team in the race still to have a full squad.

The thunder storm which was going to cause all the problems on the Allos finally appears and we drive off the hill with the wipers maxed out. A great day for Giant and Geschke, their Tour is saved and not a bad day’s racing – but the contest for yellow?

As Dave says; ‘paint drying, the worst Tour in years. . .