Race Report: On a day that saw spectacular crashes, unprecedented neutralizations, abandonments, chaos, lost jerseys and fantastic attacks, it all came down to the Wall of Huy, and it was the specialist classic climber of Joaquim Rodríguez who rode the rest of the race off his wheel to take the win atop the famous climb.

This year’s Tour has been billed as ‘a-classic-a-day’ and it’s fitting that the man at the top of the standings at the start of the day was in every sense a classic rider. With Etixx – Quick-Step employing their usual crosswind tactics to such devastating effect yesterday, the race was wide open with two of the big favorites caught on the wrong side of the break, but Etixx had their eye on the stage prize. In the end, the train went too early and Cavendish hit the front sooner than he would have liked and faded before the line. When he realized he would miss the win he backed off and this allowed a fast-charging Cancellara (Trek Factory Racing) to claim third spot, and the time bonus that went with it, to elevate himself above Cav’s teammate Tony Martin and take Yellow.

Today’s stage was a mini Fleche Wallonne and this particular classic is one that doesn’t suit Cancellara, but if he were to lose the jersey today then tomorrow’s mini Paris Roubaix is one that he excels in and he could be in yellow once again. Well, that was the theory anyway, it wasn’t to play out in his favor.

Heading out of Anvers on the outskirts of Antwerp the route headed southeast for 160kms towards the finish up the Mur de Huy, a nasty sting in the tail which would see the big guns coming out of the pack in pursuit of the 10-second win bonus. Here’s how the stage played out:

Licking Wounds
With a few riders suffering crashes and falls yesterday, nobody was very keen to stir things up and the usual break of the day got going straight away. It was a four-man group and contained Jan Barta (Bora-Argon 18) who was in the breakaway all day yesterday as well, Serge Pauwels (MTN-Qhubeka), Bryan Nauleau (Team Europcar) and Martin Elmiger (IAM Cycling). They steadily pushed their advantage and by the time they’d covered 50kms the gap had reached almost 4 minutes but with Tinkoff-Saxo appearing at the front of the bunch it dropped closer to 3 minutes.

The break of stage 3

A few riders came a cropper yesterday with Joaquim Rodríguez (Team Katusha) banging his knee causing a bit of a worry for the Spanish climber. On the other hand, it’s a day of celebration for André Greipel (Lotto Soudal) as it’s the first time in his career that he’s worn the Green Jersey of points leader.

Quiet Before the Storm
With the race crossing into the region of Brabant Wallon there was a slight quickening in the bunch, not so much in an effort to chase, but rather due to the nervousness of riders keen to keep a good position at the front as the roads began to narrow. With the double blow of missing the break and then flatting yesterday, news was coming through that defending champion Vincenzo Nibali was in for some more woe. His team Astana, choosing to field their rider Lars Boom who had returned a low cortisol reading, had been suspended by the MPCC for breaking that organization’s rules and it’s expected that when a full board meeting takes place, the Kazakhstan team will be expelled. Not good news for a team already riding under a cloud.

With the first climb coming at just over 40kms to go, the bunch was slowly reducing the deficit and the gap was now running at less than 2 minutes as riders began to think about a hard finalé to the day.

Chute, Chute, Chute!
As the riders were building for a big rush to the first ascent, and with the break just about to be caught, there was a touch of wheels and an FDJ rider went down heavily on the right hand side of the bunch and suddenly there were bikes and riders somersaulting everywhere. Riders barreled into an unfortunately placed lamppost and there were bodies strewn everywhere. As the dust cleared, the two most significant fallers were Tom Dumoulin (Giant-Alpecin) and race leader Fabian Cancellara and it was soon announced that Dumoulin and Simon Gerrans (Orica-Greenedge) had been forced to abandon. 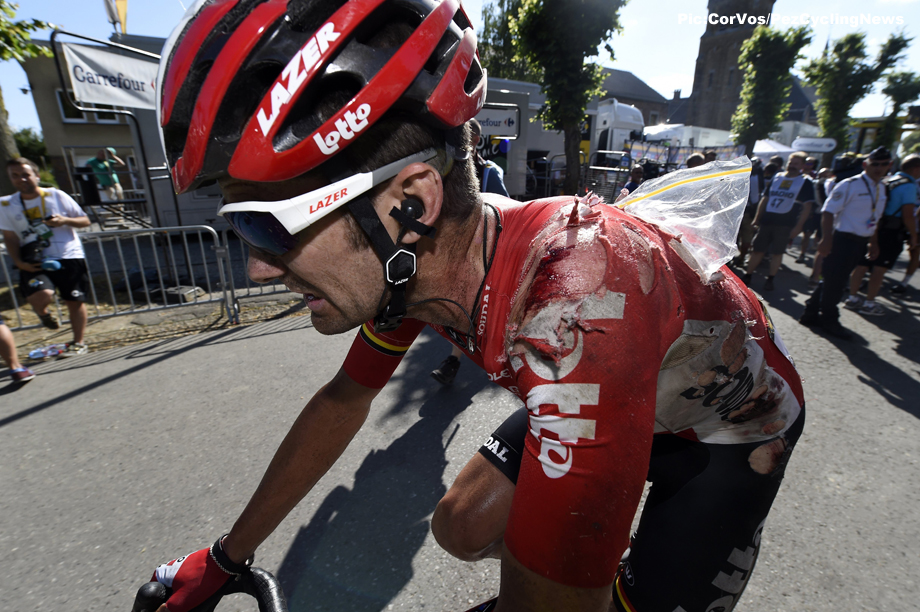 Greg Henderson (Lotto Soudal) was caught in the crash, but was able to continue

With another crash in the bunch, the race organizers attempted to stop the race but Team Sky, Movistar and Astana had other ideas and set off past the red referees’ car. It was down to Christian Prudhomme himself to bring the race to a halt at the bottom of the climb and ask the riders to respect the rules… although many were asking which rule they were using to stop the race.

Cancellara was back but looking concussed and the wounded were being attended to. With the lead riders seeing some of the shredded jerseys and bruised bodies, the objections to the official stop seemed to disappear and everyone waited for the race to get going again. Riders out were Tom Dumoulin, William Bonnet (FDJ) and Simon Gerrans. Laurens Ten Dam (LottoNL-Jumbo) had dislocated his shoulder but his team ‘popped’ it back in and sent him on his way. There will undoubtedly be some discussion on whether the race should have been stopped and Patrick Lefevere said it set a ‘dangerous precedent’ but the riders were just keen to get going again. 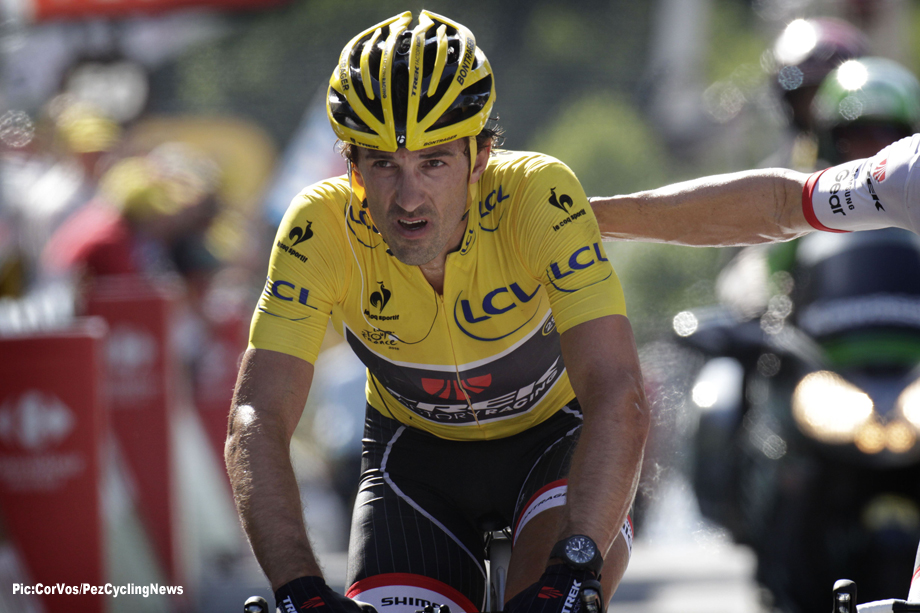 Rolling Again
The bunch was rolling up the climb but the race was neutralized and everyone was behind Prudhomme’s car and it had been announced that racing would begin after the summit of the Côte de Bohissau. With the flag coming in, the riders were in no mood to put the hammer down and the race continued to roll along as riders tested out injured bodies. Cancellara was riding at the back and called up his team car. Up ahead, there was no real mood to pick up the pace.

It had been announced that the official reason for the stop was that with both crashes happening at the same time, the medical staff had been blocked and couldn’t get through to the second crash… controversial possibly, and debate is sure to continue later.

First to start pushing was Team Sky and they were quickly joined by Tinkoff-Saxo as the two favorites protected their overall positions.

Beware the Crosswinds
As the race turned a corner, and the wind direction changed, Tinkoff-Saxo and Astana put the hammer down and forced a split. Ian Stannard (Team Sky) punctured at just the wrong moment and Sky was forced to pull very hard not to lose the wheels. All of the main contenders were concentrating today and they were all there but Pinot (FDJ), Valverde (Movistar) and Bardet (AG2R-La Mondiale) were forced to chase to get back on. As the gap stretched to 18 seconds it was mainly the injured riders who were suffering with Cancellara hanging onto the back.

Into the sprint point at Havelange and it was always going to go to Greipel with the only real challenge coming from John Degenkolb (Giant-Alpecin) as they fought out the Green Jersey competition.

Côte d’Efreffe and Côte de Cherave
Up and over the first climb of this year’s Tour and Cancellara was over 2-minutes down in the company of Greipel and it was sure that Yellow would be going elsewhere tonight.

With two more 1.3kms long climbs to go all of the favorites were at the front with Team Sky driving on possibly setting something up for Chris Froome.

Through the town of Huy and Etixx were on the front for Michal Kwiatkowski. Another Michael, Rogers this time, for Tinkoff-Saxo was also driving for his team leader; Contador and the pace was shelling riders right out the back including former World Champion Rui Costa (Lampre-Merida) who had been caught up in the earlier crashes. Thibaut Pinot was also finding the going hard and being dropped.

Mur de Huy
Into the final push of the day and Sky was on the front with Movistar as everyone watched each other, waiting for the attack to come.

Onto the climb and under the Flamme Rouge Bob Jungels (Trek Factory Racing) made a move but was quickly caught. Katusha was on the front with Froome in second spot. On his shoulder was Contador but with 600 meters to go it was the ‘little cigar’ of Joaquim Rodríguez, his left elbow wrapped in bandages, who made the big acceleration. Tony Gallopin (Lotto Soudal) and Froome went with him, but Purito held them off all the way to the line with Froome taking second spot. Contador couldn’t hold the wheel and fell away losing valuable seconds. With the time bonus it looked as if Froome had taken Yellow but we waited for the official result. 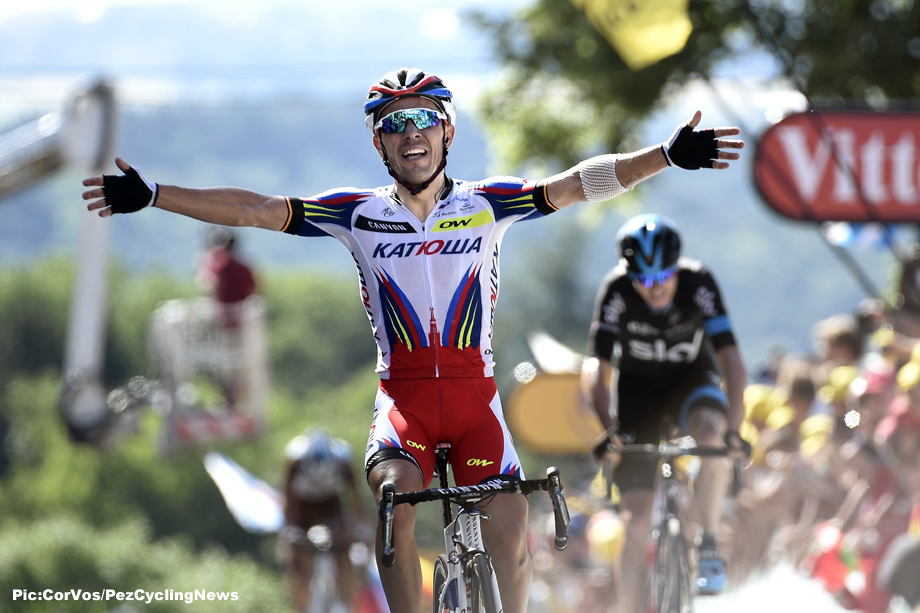 Joaquim Rodríguez: “This is a special moment. I won Fleche-Wallonne here and so know the Mur well. It was very different today. I couldn’t get it wrong today because I knew I had the legs.” Joaquim Rodríguez

It was the little man from Barcelona who took the win on a classic day that saw some classic riding and some classic crashes… we’ll be talking about this one for some time to come.

Keep it PEZ for Gordan’s day in Belgium!