Race Report: On a difficult day of crosswinds it came down to a superb sprint finish and with Cavendish mistiming his effort on Stage 2 he was determined to get it right. He held Greipel’s wheel on the run-in but with Alexander Kristoff heading for the line he could wait no longer and surged forward only to see Greipel and Sagan come past him seconds later and flash past the camera.

Traditionally, Tours starting in the north of France, or in Holland and Belgium, have been a week of leg-blistering chases, daunting crosswinds and little guys struggling to hang on before they finally reach the mountains and begin to shine, if they’re not completely tuckered out by that point.

This year however, we’ve had one ‘classic’ after another and the main contenders are all still pretty near the front, except maybe for Thibaut Pinot (FDJ.fr) who was the main loser in terms of time yesterday. Today we returned to a more familiar type of route with a relatively flat parcours that should see the usual sacrificial breakaway followed by the mad sprint for the line. The big exception is that with Tony Martin (Etixx – Quick-Step) in yellow, he may have been excused ‘sprint train’ duty in the service of Cavendish.

Armistice Day
As today’s stage took the race over the Somme battlefields some teams were keen to show their respect to the fallen and before the roll-out Froome and Kennaugh from Team Sky laid a wreath at the Commonwealth Memorial while the Orica-GreenEDGE riders were wearing special ANZACS armbands.

This area of France is very exposed with little in the way of tree cover and, as expected, the wind was blowing. It was also raining at the start and the temperature was unseasonably chilly. Right from the flag two riders headed up the road and they were Nicolas Edet (Cofidis) and Pierre-Luc Périchon (Bretagne Seche). The race allowed them to go, as behind they were more concerned about the wind with the peloton splitting into a number of echelons.

The duo had over 2-minutes, but Edet decided to drop back probably thinking of supporting his leader Bouhanni at the finish in Amiens. He wasn’t to know but there had been a crash in the bunch that took Bouhanni and several teammates down and it was reported that Bouhanni had abandoned, possibly with a broken wrist. Dani Navarro had also gone into the ditch but he now becomes the Cofidis team leader. Up ahead, Périchon was forging on alone and had built a lead of 2-minutes with the teams behind watching the wheels in classic echelon style.

A lonely ride for Pierre-Luc Périchon

Sprinting for Points
With the road twisting in different directions, and nervousness high in the bunch, there were a number of small crashes with riders sliding down. Bryan Coquard hit the ground several times and was looking decidedly unimpressed. The race had split into two main groups with riders chasing behind but at the sprint point at Rancourt everyone was back on.

Périchon took maximum points 40-seconds ahead of the field but the sprint kings were there to fight for the remaining points with Greipel (Lotto Soudal) proving too strong for Degenkolb (Giant-Alpecin) and Cavendish (Etixx – Quick-Step). With the increase in pace, the lone leader was soon back in the field as the bunch took on food through the feedzone.

Crosswinds and Cross Words
With the route making 90˚ turns and heading off across the fields, everyone was keen to stay near the front as the inevitable splits happened. Cannondale-Garmin were pushing at the front while their New Zealand rider Jack Bauer was abandoning at the back, succumbing to his crash injuries.

The race having split into two main groups, sprint favorite Mark Cavendish flatted and was serviced by team manager Brian Holm. With the squad up front protecting race leader Tony Martin he had to make do with just a couple of teammates to get him back into the lead group. Stybar and Renshaw though were looking after him and despite his usual harsh shouting they soon had him back in. We now had two main groups and with 60kms left to run the second group was at 2:45 and had probably realized their race was run for today. 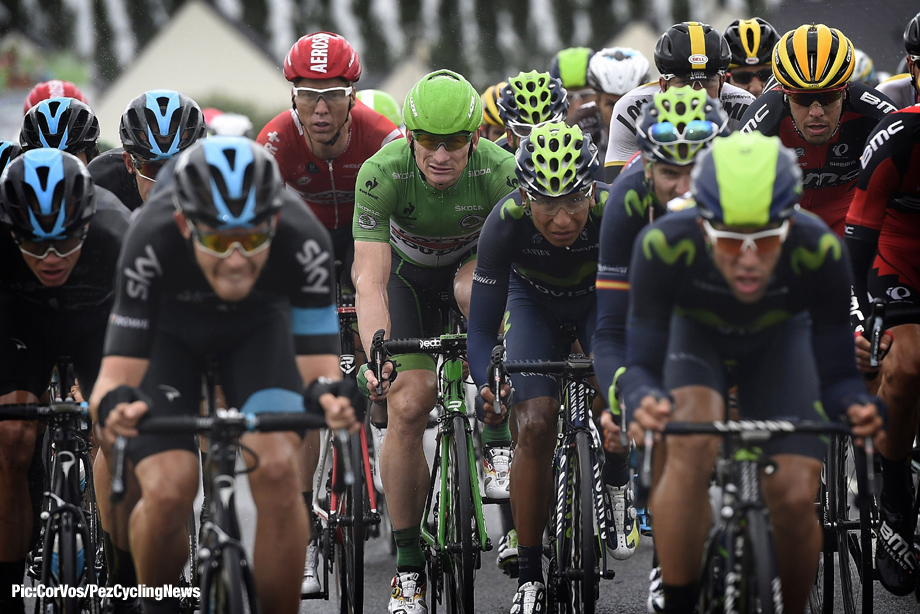 A wet and windy day for the peloton

All Quiet
With the riders going into the headwind, and just over 40kms to run, the front group was keeping a close watch. Everyone was paying attention waiting for the next crosswind and the expected attack of the day but as the race passed through town after town in the rundown to Amiens riders were keeping their powder dry. The acceleration was sure to come and time was running out.

The second peloton at 3-minutes with the lead group all together it was all looking good for Etixx – Quick-Step, both in terms of the overall for Martin and the wind-up for Cavendish.

Pinot Blues
With the rain falling heavily it took just a touch of brakes at 25kms to run and 20 bikes slid down the road. Included in the riders to fall was the unluckiest man of the race so far (if you exclude those forced to retire) Thibaut Pinot (FDJ.fr) but the front end of the field wasn’t ready yet to apply pressure and riders slowly made their way back into the group.

It just showed how treacherous the conditions were and some racers were just getting pretty fed up with the conditions and wanted to get the day over and done with. The second group had given up already and was now five minutes back.

Ramping Up
Coming into the last 12 kms and the main teams were all at the front with the pace now approaching run-in speed. The sprint teams were keeping the pace high but no one squad wanted to take it on too soon. Etixx went too early on Day 2 and didn’t want to make the same mistake. With Martin knowing that his Yellow Jersey was safe for another day he could play the teammate for Cavendish. Others, though, had their own plans.

News coming through from the finish was that there was a serious headwind on the line and it would be a strong rider that would take the win. BMC and Astana were forcing the pace to keep the GC men safe and we were into the final 8 kms. Team Sky, Movistar and Tinkoff-Saxo were all protecting their leaders as they headed towards the 3 km limit and they could leave it to the sprint kings. 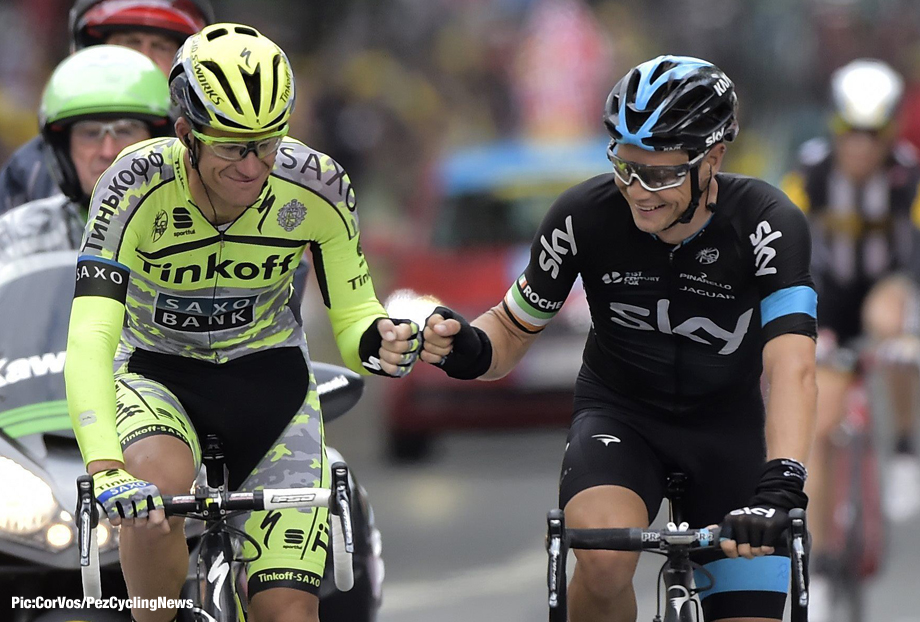 Release the Firepower
Into the last 5 and riders were constantly checking over their shoulders, nervous and waiting for the moment when the fast men would come to the front. Into the last 3km and Kwiatkowski brought the Etixx men to the front with the whole line there in the service of Cavendish.

MTN-Qhubeka was there with Farrar riding for Boasson Hagen but it was the Yellow Jersey himself who was leading the race for his teammate. Suddenly it was Giant-Alpecin for Degenkolb with Greipel sitting on his wheel.

With 500m to go it was Renshaw on the front but Cavendish had held back and was on Greipel’s wheel. Classic specialist Kristoff (Katusha) hit the front and Cavendish could wait no longer and joined the rush to the finish.

It was looking oh so close when who should appear on the left side of the road but the Green Jersey himself as Greipel now released his firepower and swept past everyone to take the win. Closing on his wheel was Peter Sagan (Tinkoff-Saxo) and if the race had been 10 meters longer he would have taken it but the Lotto rider had judged it to perfection and showed all the other sprinters a clean pair of wheels to take his second stage. 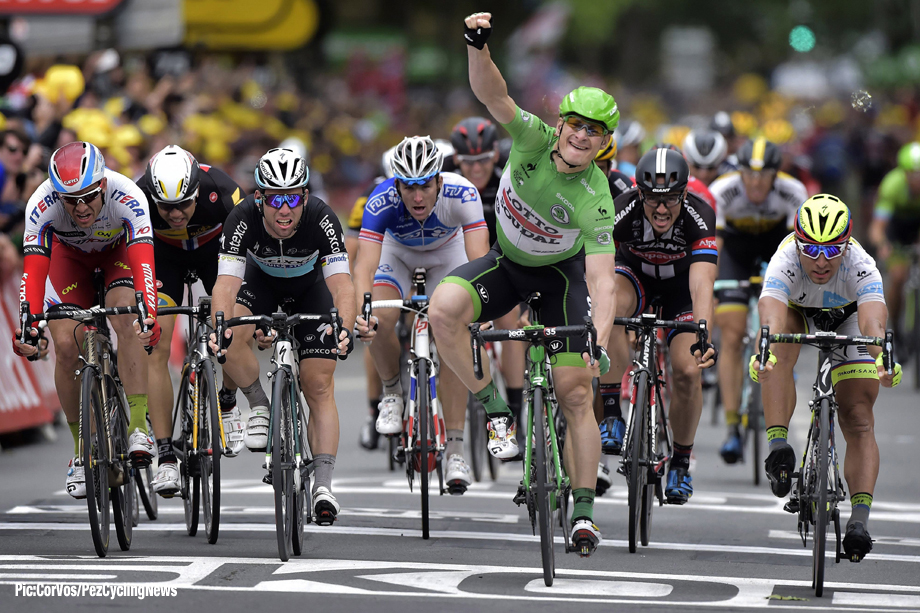 Another stage for Greipel

“Tony Gallopin, Marcel Sieberg and Lars Bak, they brought me to the front. Marcel Sieberg did the work of three and it was quite an amazing job. Normally with 300m to go I would be finished but somehow I got out of it and managed to launch my sprint,” said André Greipel.

What a wonderful sprint and this time the day belonged to Germany with Greipel taking the win and retaining the Green Jersey and Tony Martin safety keeping hold of the Yellow; mixed emotions today for Etixx and Cavendish will be wondering why he again went too early. The second group on the road finished some 14-minutes back and the most aggressive rider award went to Michael Matthews (Orica-GreenEDGE) who had batted his injuries all day just to stay in the race.

Keep it PEZ for Gordan’s Roadside Report up soon.