Race Report: Stage 6 of the Tour de France will be remembered for a few reasons: Africa took its first Tour King of the Mountains jersey with Daniel Teklehaimanot, ex-cyclo-cross World champion, Zdenek Stybar, won his first French Grand Tour stage and (probably) we lost another yellow jersey in a crash as Tony Martin hit the tarmac in the final kilometer. Yet another crazy day in the Tour de France.

An early break was expected and when it included MTN-Qhubeka’s Daniel Teklehaimanot, we knew he would be going for the KOM jersey. What we couldn’t guess would happen; on the steep one kilometer climb to the finish line in Le Harve was a case of pleasure and pain for the Etixx – Quick-Step team. Zdenek Stybar won the stage in a stunning fashion, but the Yellow jersey wearing Tony Martin crashed on the steepest part of the climb and had to be pushed to the finish by his teammates. Have we lost our second yellow jersey in this year’s Tour? 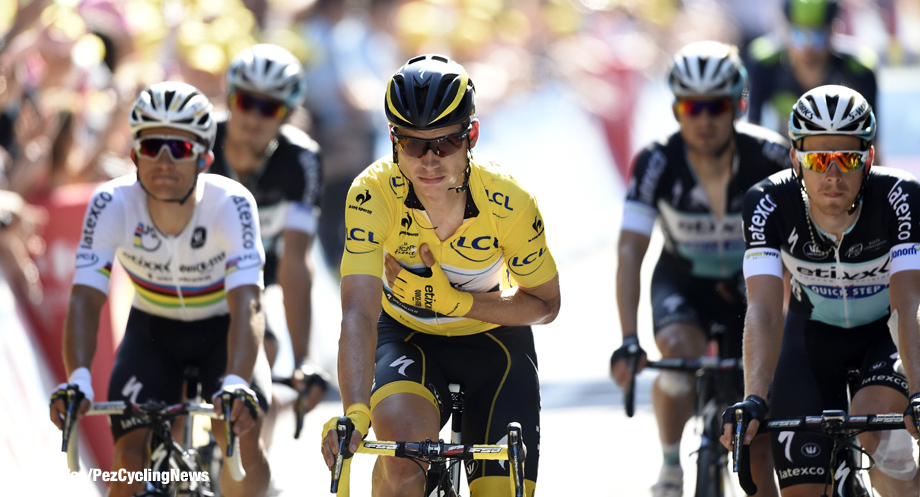 Tony Martin crossed the line with help, but what about tomorrow?

The Course
Stage 6 from Abbeville to Le Harve: 191.5 kilometers of very undulating roads with three Cat 4 climbs and an uphill finish. The course follows the Normandy coast before it hits the last rise. The finish is at 75 meters, so we are not talking about anything too big, but it shouldn’t suit the specialist sprinters like Greipel and Cavendish, although with the form the German has at the moment…

The break of the day
The riders didn’t hang around after the start in Abbeville and the attacks came as soon as the flag dropped. After a few failed attempts: the pair of Perrig Quéméneur (Europcar) and Kenneth Van Bilsen (Cofidis) escaped with Daniel Teklehaimanot (MTN-Qhubeka), after 10 kilometers of racing they had over four minutes lead. Their lead grew and grew, until it was over 12 minutes with 160 kilometers to go. Teklehaimanot was the best placed overall at 26:54, so there were no alarm bells ringing, just yet.

The race entered the Normandy region and Lotto Soudal started to help Giant-Alpecin at the front of the peloton, not quite a chase, but the advantage started to fall steadily and with 130 kilometers to go the lead had dropped to 6:15. 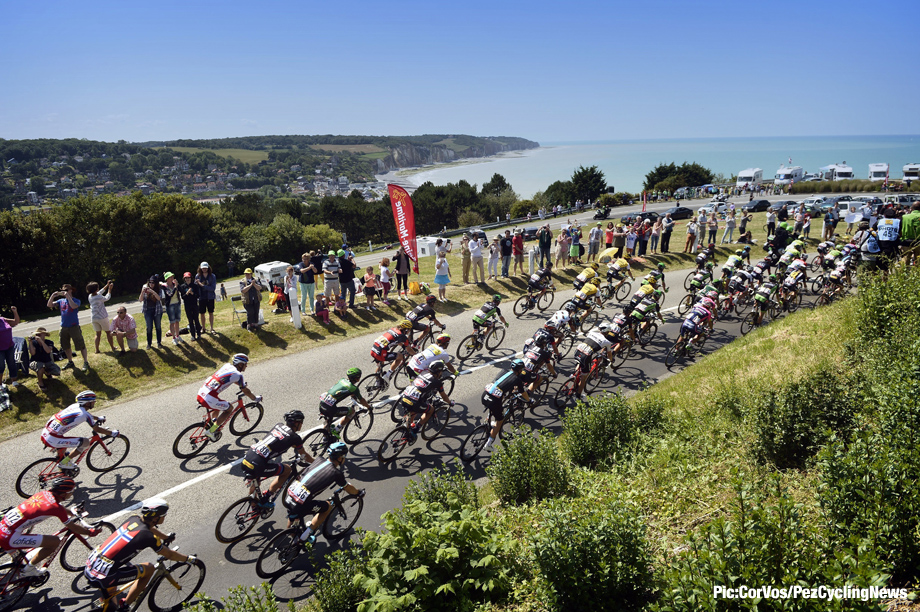 Nice day for a bike ride along the Normandy coast

Two riders who are showing an interest in today’s stage was Peter Sagan (Tinkoff-Saxo) and John Degenkolb (Giant-Alpecin). The German said before the start: “The finalé suits me quite well. All day is really hard, it’s always up and down. The intermediate sprint is also quite hard today. It is uphill and about 2 kms long, not as steep as the final climb but the final climb is pretty short.”

Daniel Teklehaimanot took the two Cat 4 climbs, the Côte de Dieppe and the Côte de Pourville-sur-Mer, which puts him on the same points as KOM leader Joaquim ‘Purito’ Rodriguez (Katusha).

Etixx – Quick-Step thought they would help the chase, but the lead was being held around 4 minutes. Through the feed there was no rush and the gap had gone to 4:41, more importantly there were no crashes. Talking of which, Thibaut Pinot hasn’t had a crash (yet) today, he also hasn’t had any gear problems. You can read what Lee Rodgers thinks about Monsieur Pinot’s little strop here.

There was one crash, Alejandro Valverde (Movistar) slipped on some gravel after stopping for a call of nature. Thomas De Gendt (Lotto Soudal) and Georg Preidler (Giant-Alpecin) tried to jump across to the break at one point, but that failed and with 60 kilometers to go the lead was 2:48.

AG2R-La Mondiale, Lotto Soudal, Giant-Alpecin, Sky, BMC and Tinkoff-Saxo had all moved forward in the bunch, but the gap was being held… for the moment.

At the intermediate sprint in Saint-Léonard with 45 km to go, it was Quéméneur who rolled over the line first, but the action was in the peloton as John Degenkolb took 4th in a hard fought battle with Coquard, Greipel, Sagan and Cavendish. The sprint action launched Thomas Voeckler (Europcar) off up the road after the break, which was only just under 2 minutes ahead.

BMC’s Damiano Caruso tried to take a short cut over a traffic island, but he rode straight into padding on the signage and went over the handlebars, but he remounted and rode on. Meanwhile the move of Voecklers ended as he waited to be caught by the peloton.

Africa’s first Tour KOM
At the summit of the Côte du Tilleul there was 1 point on offer and that would be enough to put Teklehaimanot in the KOM jersey at the end of the day. Teklehaimanot sprinted ahead for the point to become the first African to wear the Tour de France King of the Mountains jersey. It looked like the other two were going to give him a hard time for the win, but in the end he had the speed anyway. The bunch were still happy to leave the three out front for a while longer and were holding them at 1 minute as they came into the final 25 kilometers. 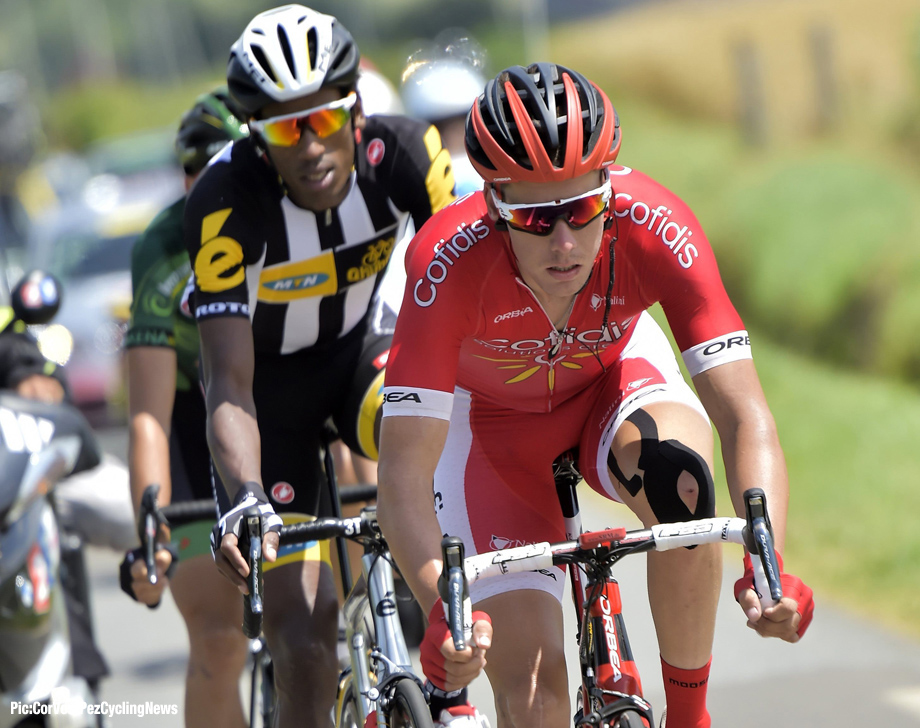 The break of the day with the new KOM, Daniel Teklhaimanot (MTN-Qhubeka)

20 to go
Into the last 20K and the lead was 1 minute exactly, the GC teams were across the front of the peloton, but Lotto Soudal and Giant-Alpecin were moving into position for their finish men. Kenneth Van Bilsen attacked the break with 12.4 kilometers to go and the other two let him go on his suicide mission as the peloton were only at 35 seconds.

10 left
Van Bilsen had 30 seconds on the bunch as Teklehaimanot and Quéméneur shook hands and were consumed by the peloton. BMC were in control of the chase and had pulled the peloton into one long, strung out line at over 60 kph into Le Harve. Under the 5 to go banner; Van Bilsen had 12 seconds. BMC were leading Etixx – Quick-Step with Giant-Alpecin close behind for Degenkolb. 3 kilometers out and Van Bilsen was captured, as Giant put a man on the front at full gas.

Etixx wanted the win, they had Renshaw, Martin and Cavendish on the front, but Soupe (Cofidis) pushed to the front with 1 K to go and the steep section started. The yellow jersey of Tony Martin moved over in the group bringing down a handful of riders, including Vincenzo Nibali (Astana). 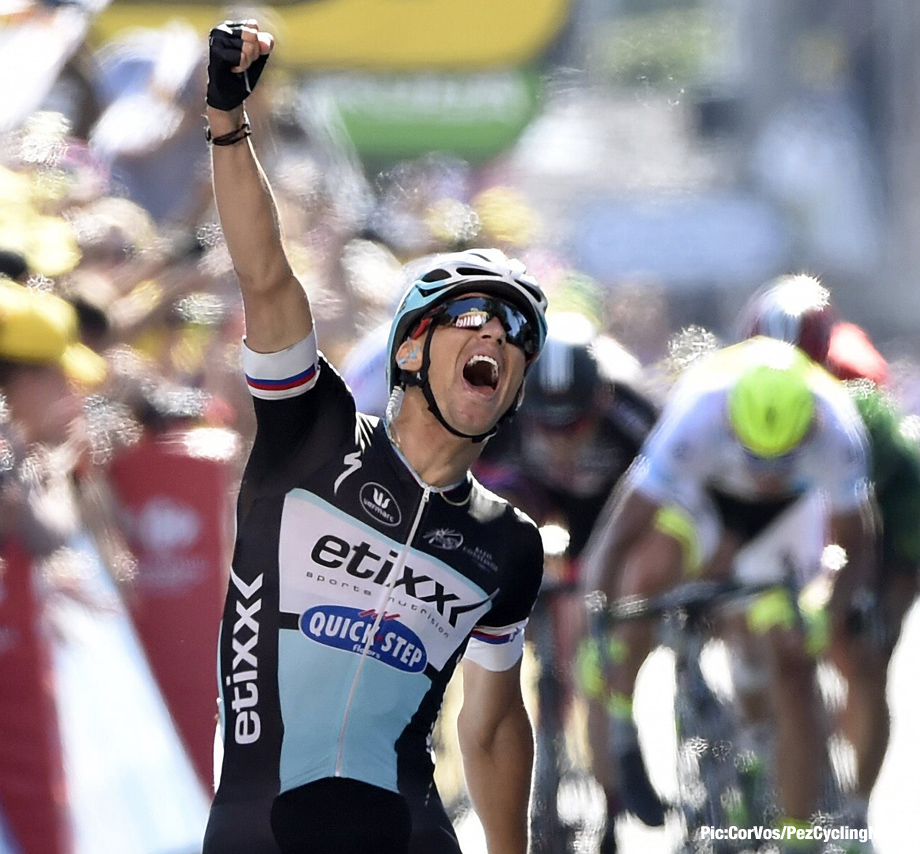 A great win for Stybar, but at what cost to the team?

Meanwhile at the front; ex-cyclo-cross World champion Zdenek Stybar (Etixx – Quick-Step) had a big enough gap to hold off a group including Peter Sagan, Bryan Coquard and John Degenkolb for the stage win, but all eyes were on the yellow jersey who was sat at the side of the road holding his left shoulder.

Eventually Martin managed to remount and ride to the finish with the help of four teammates pushing him, he crossed the line, but it looked very much like a broken collar bone for the German.

So, stage win for Stybar, but will Tony Martin be on the start line tomorrow?

Police searching for man after $19,000 bicycle stolen in Moore Park