Race report: It’s win number 26 at the Tour de France for ace sprinter Mark Cavendish as the Manxman … finally … gets the sprint finale he’s been hoping for. Etixx-QuickStep produced a great team ride, especially by Michal Golas to keep the break in check, and Cav finished it off perfectly.

After the happy/sad afternoon yesterday with Stybar winning the stage as Tony Martin crashed out, it was all about Cavendish today. The most successful current Tour de France rider, in terms of stage wins, zipped onto Alexander Kristoff’s wheel, dodged round him and undercut Peter Sagan, in the blink of an eye to emerge in the final 50 meters as the stage winner. 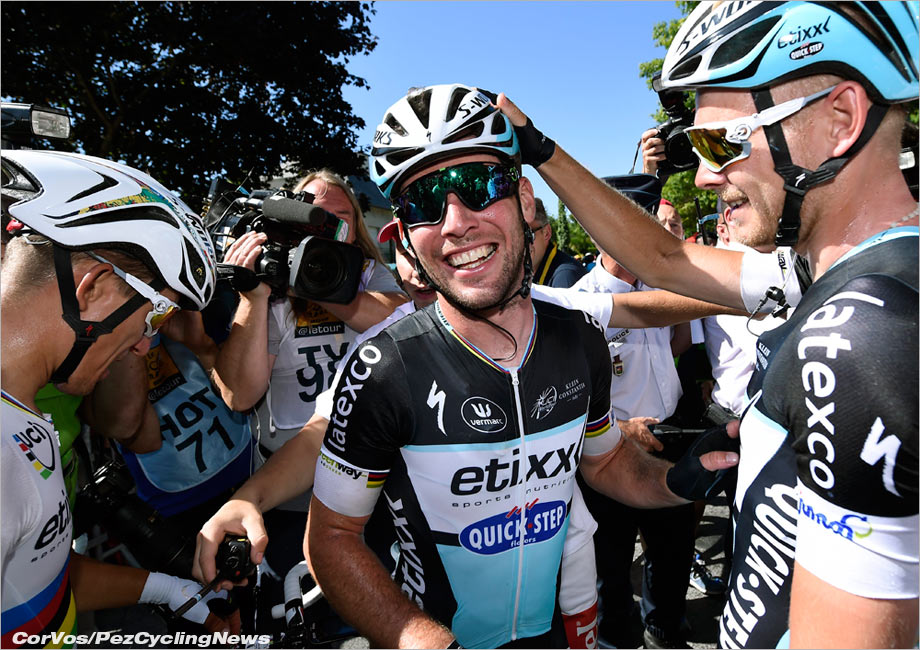 It was as surgical a sprint finish as he would have wished for. That means three stage wins, a yellow jersey, and a broken collarbone for Etixx-QuickStep this week – it’s hard to grab more glory, sympathy or headlines than that so Patrick Lefevre should be a happy-ish man tonight, after a third of the racing is done in the 2015 Tour.

How it went down
The crash count this year has been high, and the consequences have been severe, with two yellow jerseys forced out. The first significant rider/tarmac interface took place before the flag had even dropped today: no less a rider than Alberto Contador (Tinkoff-Saxo) hitting the deck in the neutral zone along with LottoNL-Jumbo’s Robert Gesink. Luckily, both are up and away without any obvious damage.

Lotto-Soudal’s Greg Henderson bowed to injuries sustained on Monday, joining Etixx-Quick Step’s overnight race leader Tony Martin as a DNS in Livarot. The peloton has had a brutally hard first week, and with that in mind, they just relaxed into the stage as MTN-Qhubeka’s legend-maker Daniel Teklehaimanot, Lampre-Merida’s Kristjian Durasek, Luis Angel Maté from Cofidis, and the Bretagne-Séché Environnement Anthony Delaplace and Brice Feillu went away very early. 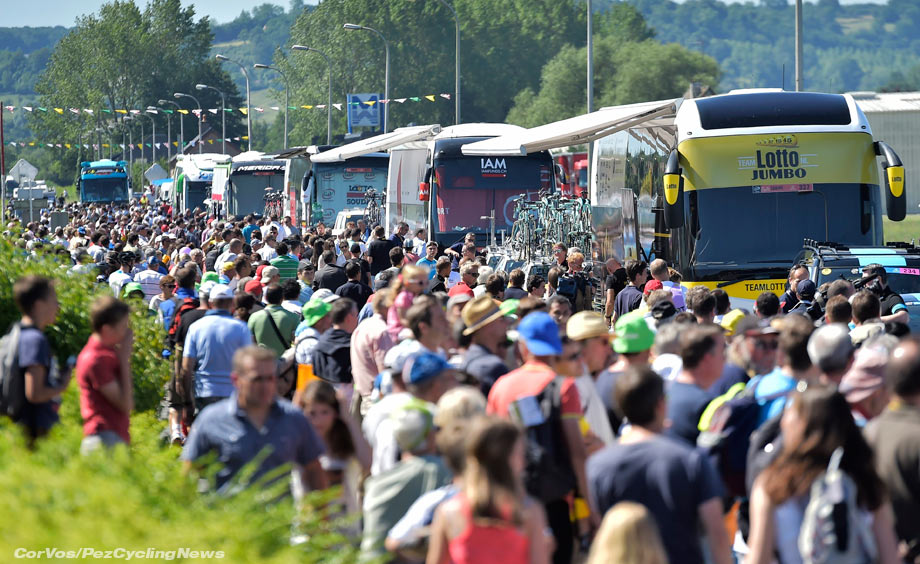 There’s never a moments peace at the team buses.

The Eritrean goes over the day’s sole KoM to extend his lead just a little, and ensure the African team have at least one visit to the podium today. Things settle down once Etixx-QuickStep and Lotto-Soudal take charge of the main field and the gap hovers just under four minutes.

The escape bulldozes into a headwind and Maté tows his companions through the intermediate sprint at Argentan; John Degenkolb leads the sprinters through for the minor points as hostilities open up early in the battle for the green jersey.

Approaching 110kms to race of the 190 on the road to Fougères, the gap is tickling two-and-a-half minutes, and there seems to be a collective easing of effort. The advantage wanes to a minute, and then waxes again as the main field want the break to fry a little longer before setting up a sprint finish. 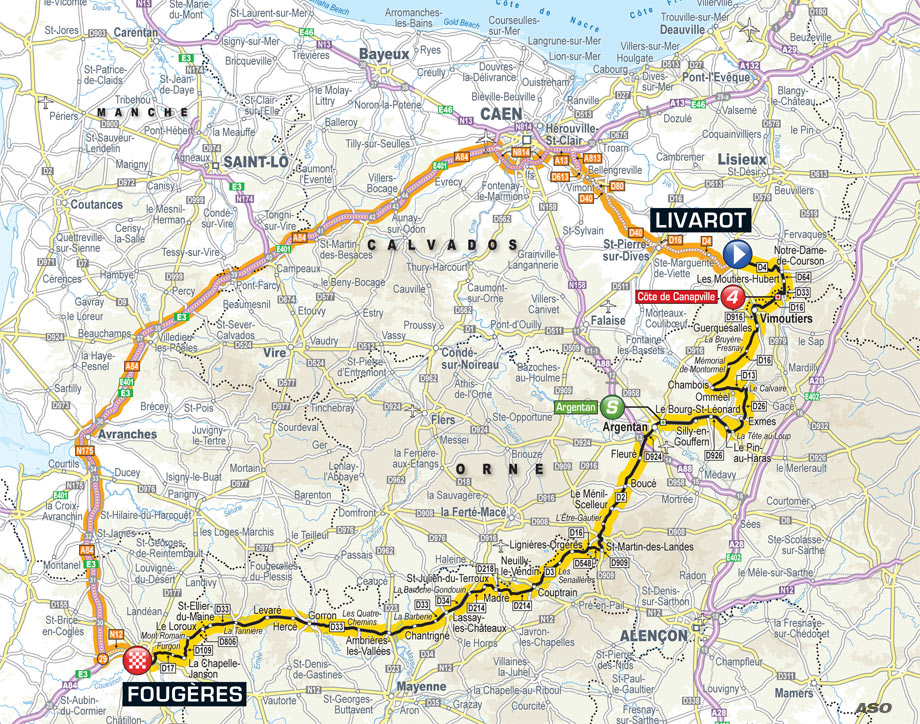 There’s not a colossal amount to report until 30 clicks to go when Teklehaimanot drops back as the peloton closes in; Brice Feillu struggles as Maté injects a bit of speed, but the quartet hang on a bit longer.

Etixx-QuickStep and Lotto-Soudal, with Michal Golas and Thomas De Gendt respectively, have been doing the donkey work to bring the escape back.

As the field hammers ever more quickly towards the finish, Movistar, BMC, Sky and Tinkoff-Saxo all loom with their leader-protecting trains.

Approaching 15kms to race, Delaplace has one last go to break the elastic, but Maté responds and Feillu goes with him. Durasek and Delaplace have had enough and drop away. But it’s a raging against the dying if the light … the peloton just swarms along behind them, like bees with attitude.

Inside ten to go, Sky are barreling along at the front, with Nicolas Roche driving.

With five to go, Etixx-QuickStep are looking better positioned, even without Tony Martin; Mark Renshaw is in control as Mark Cavendish licks his lips. Giant-Alpecin also appear as if out of nowhere.

Then suddenly FDJ for Demare are at the front and it’s a sprint royale with all the top fastmen going head-to-head. The road gradually creeps up in altitude as the finish gets closer, so it’s got to be split-second perfect when the sprint unwinds. Who gets it right? 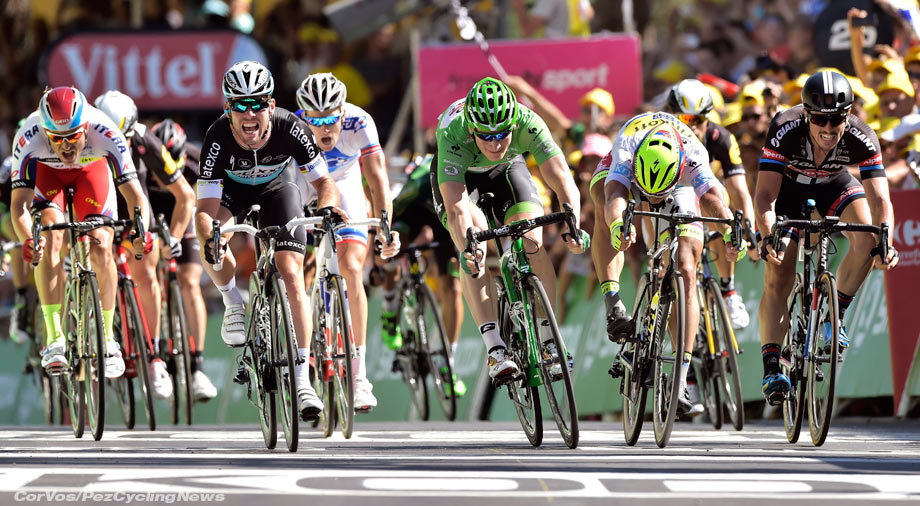 Cavendish looks boxed in with a couple of hundred meters to go as Katusha try to launch Alexander Kristoff, but Cav skips smartly around the Norwegian and kicks to the line ahead of Greipel, Sagan, Degenkolb and Kristoff.

Honorable mentions for Tyler Farrar in 7th and young Irishman Sam Bennett getting a top ten placing for Bora-Argon 18. 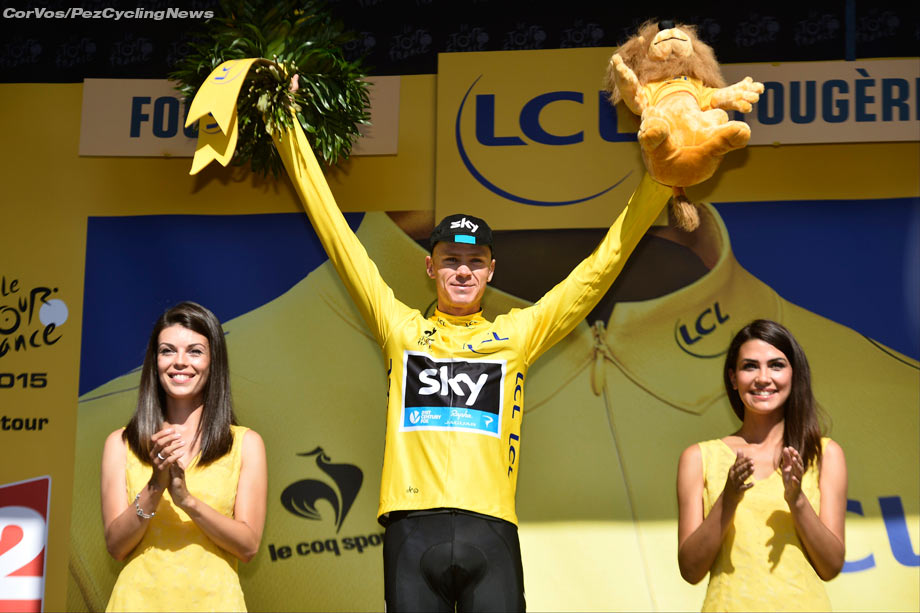 Overall, Chris Froome can now inherit the yellow jersey vacated by Tony Martin; the overall contenders had as much of a day off as they could hope for today.

Tomorrow, it’s a finish on the Mur de Bretagne, so they’ll have to be on maximum focus. For Froome, that might mean hoping/engineering a position where Sagan wins the stage to take the bonus seconds and the overall lead – reduce the pressure on Sky, and heap a little on Contador’s boys? You never know …