Race Report: BMC do the hugging – but only by the narrowest of margins from Sky – Froome keeps yellow – he looks like the overall winner already – Quintana, Contador and Nibali all lose time to the world’s skinniest chrono man on a short but savage day in North West France.

Quintana won’t be too upset whilst Contador and Nibali’s rides were by no means disastrous – but would you like to have to claw those lost seconds back from Froome in the mountains? Me neither.

Race distance today is 28 kilometres with three climbs – the final one to the line. Blow on that last climb and you’ll need a calendar to measure the time loss – riders in a TTT hover just on the red line, go above that line and it’s inside ring stuff. It’s a tough one, even though it’s ‘only’ 28K in total and there doesn’t seem to be too much wind or heat. 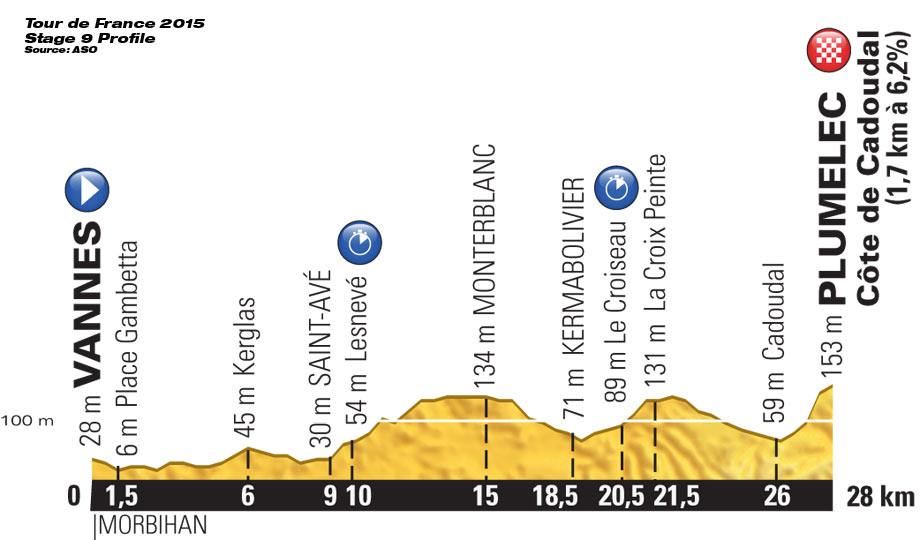 Race favourites have to be reigning world champions BMC; but a TTT after eight tough days isn’t the same as one where a team has had the luxury of a well planned build up and much today will be down to who’s best conserved energy through a savage first week – and who wants it most.

Orica-GreenEDGE as first off – to quote the pop group Hot Chocolate – are just ‘Going through the motions,’ with only six riders left and Michael Matthews as walking wounded they’re not going to be their usual big horse powered selves. Bretagne, FDJ.fr and Europcar are behind them but the heady days of French strength in this discipline with Renault when Hinault, Marie and co. burned up the tar are long gone and it’s unlikely these teams will, ‘trouble the time keepers.’

Lampre-Merida are out on the course too and have started to shed men early – the Italians are no specialists either, and again the days of Carrera and Ariostea as TTT favourites are only remembered by old fogies like me. Lotto Soudal has big strong boys, but there’s no real motivation for them to go too deep today with no chance of victory and no one in the final mix for GC. IAM Cycling have some big beasts in there but again, there’s no real reason to give it 100% to finish fifth, or even sixth.

Orica-GreenEDGE hobble in – enough said. Bretagne take it steady on the final climb with five coming home – this final climb is going to be interesting when the big guns fire, looking for those vital hundredths. Lampre-Merida go top, down to five men despite obviously not being ‘a bloc’ over the 28K. Bora-Agron 18 finish with eight but can’t touch Lampre; neither can FDJ.fr with five men. Europcar come home – no dice.

LottoNL-Jumbo and Trek are on the course and now we’re into teams who can perhaps pull something out of the hat. MTN-Qhubeka are on the parcours with Boasson Hagen working hard as Lotto get up that last climb as best they can. 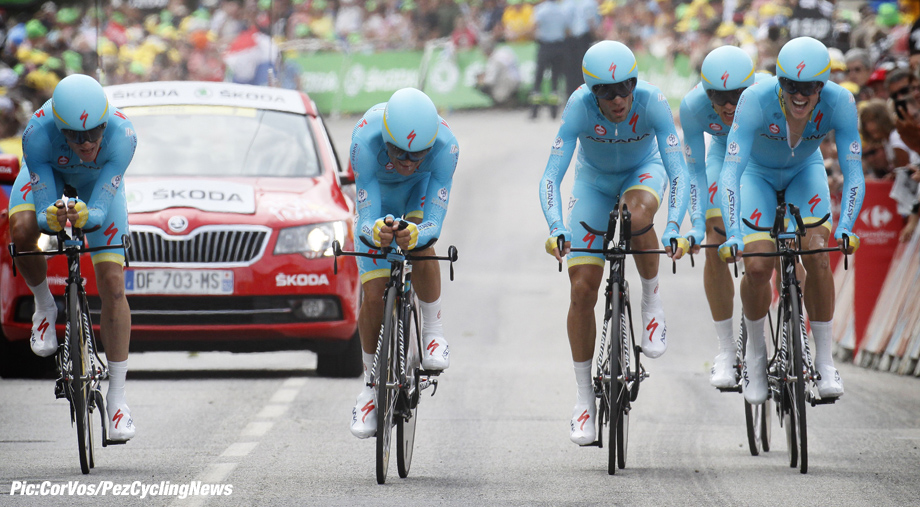 Astana, and it doesn’t look good as they split on a drag with two off the back; it looks like someone is driving too hard and splitting it – that will cost. IAM Cycling go top with five men but the big guns are still loading behind the lines.

Katusha launch and are already in the streets of Plumelec are turning it on – further up the road Astana look much tidier, a nice long, straight, smooth pace line of seven men. Trek can’t match IAM at the second check; as big Steve Cummings brings MTN home – the time isn’t great but they’re in. 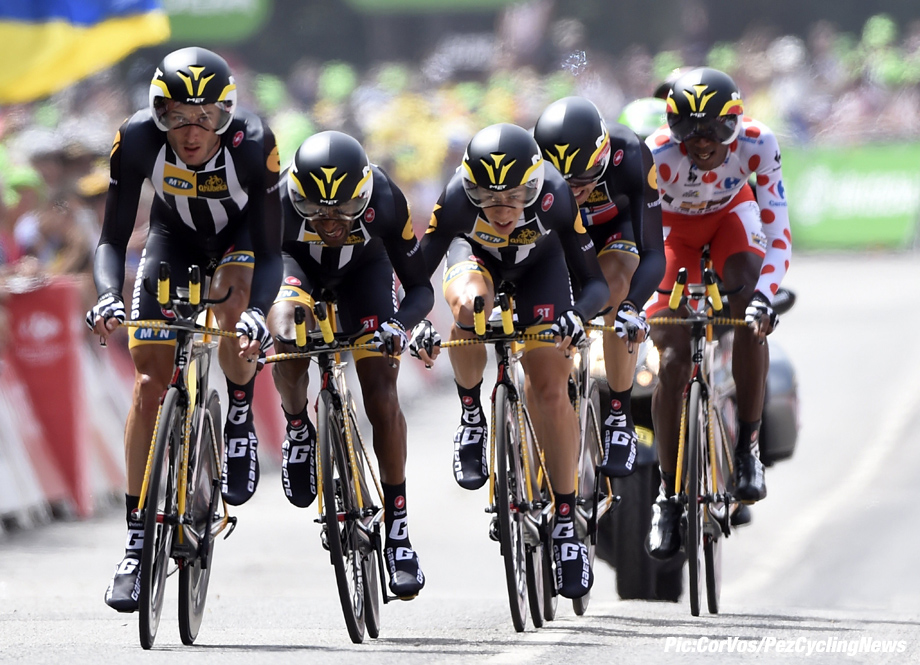 MTN-Qhubeka didn’t set the World on fire, but Steve Cummings kept them together

Check point two and Astana go top – LottNL-Jumbo can’t match IAM at the line; the Swiss riders’ time is looking better by the minute but Movistar, BMC, Tinkoff and Sky will depth charge it. Movistar and Giant are on the road and Astana have dropped another man – that climb to the finish will be crucial for them.

Trek are messy at the line, not a good day for Mollema as IAM’s time holds firm. AG2R-La Mondiale ease of the ramp whilst Astana huddle under the red kite at the other end of the parcours, this is a survival job, what’s Kazakh for; ‘keep it together boys?’

Nibali leads his boys home and they go top in 32:50; a slim three seconds faster than IAM. Nibali isn’t going to haul back chunks of time this day. Katusha are shy of Astana’s time at check two as Cannondale-Garmin battle home, well down, up that cruel drag – changed days from when they blasted to Giro pink in the TTT on the Lido in Venice a year or two ago.

Tinkoff-Saxo take to the stage as Movistar turn on the pain – they look a tad scrappy but they’re FAST as they put 18 seconds into Astana at check two; glad tidings for Quintana. But maybe we spoke too soon as two Movistar’s ride off the front and split the line – there’s no doubt that these men are perched right on that red line, the margin for error is a razor’s edge. Cofidis drop two minutes – oops. 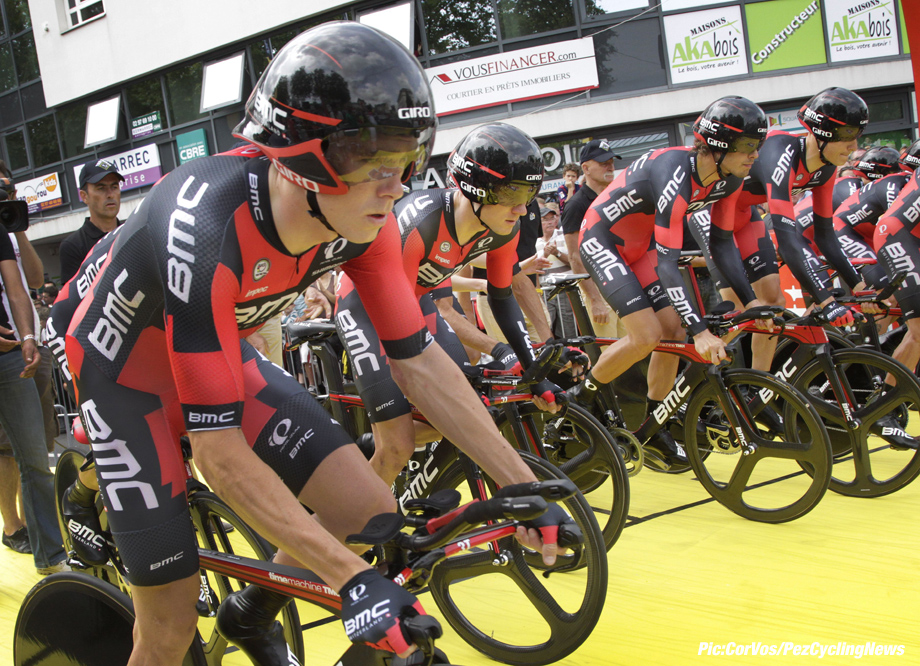 BMC kick down the ramp for the winning ride

The beeps count down for BMC and they’re away – pronto. Meanwhile, Movistar are flying again, riding like demons. Quick-Step – we need a time check. . .

Tinkoff – well drilled, they’re sliding back down the line tight on the shoulder of the riders on the way up – how it should be done. Katusha gasp that last climb, shoulders rock as they sprint it out – five left and off the pace.

Sky to close the show; they’re careful through the early bends – as Movistar hurt that last hill, Valverde checks on Quintana all the way up. This is different class: 32:19 to take the lead by a half minute. 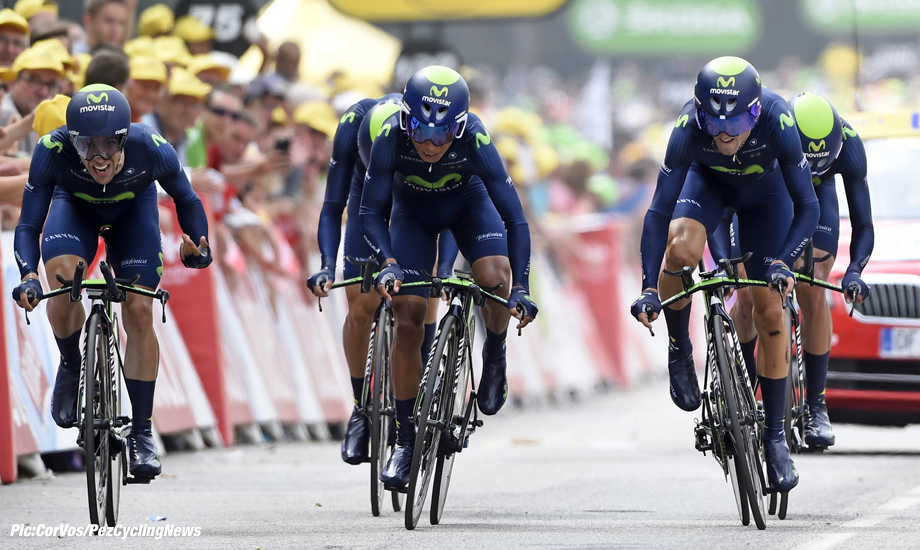 Tinkoff go top at check one, no surprise, their technique is good – Quick-Step go through check two and they’re fourth at this stage. Giant-Alpecin and Barguil drop a minute and more at the line as Sagan drives for Tinkoff; those thighs belong to a power lifter.

Sky keep it tight with Froome whirling that lower gear on the front – no small gears for Tinkoff at check two as they go through 13 seconds down on Movistar. Tinkoff lose a man, gone – no way back. AG2R drop a minute plus – not a good day for Bardet, then?

Tinkoff have seven left as they flash into the finale – BMC are flying, on visual they look sharper than Sky, but then my name isn’t Festina. 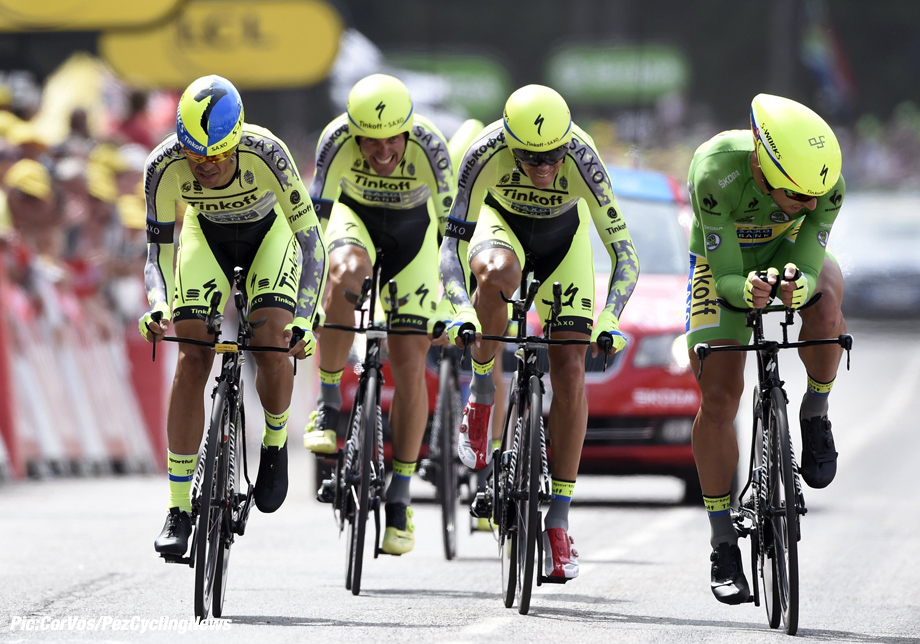 Check two and BMC burn through four seconds up on Movistar; that’s not good but not emphatic. . . Etixx – Quick-Step finish – not a bad ride, 41 seconds off the pace – they’ve missed Tony. Six men left for Tinkoff – eight for Sky and the men in black look good – Bert leads his boys home up that horrible climb. That’s why he’s the man he is, he swings off – meanwhile Sky go top by ONE tick of the second hand at check two despite Porte giving it major pain. Tinkoff can’t best Movistar; 24 seconds down – Quintana beams.

BMC are down to five men – Sky have six – who wants it most? BMC are on the last climb, Van Avermaet is last man, he can’t drop that wheel – they take the lead from the Spanish team by three seconds. Movistar abandon the hot seats – looking suitably disgusted.

It’s all down to Sky, now – Froome cuts an unlikely figure as a spindly, jerky chrono man but he’s strong, fast. Walt Poels explodes just before the flame rouge and swings wide as Froome closes gaps whilst Thomas drives it, gulping down that precious oxygen – they’re splitting, Roche cracks, Froome goes back for him. 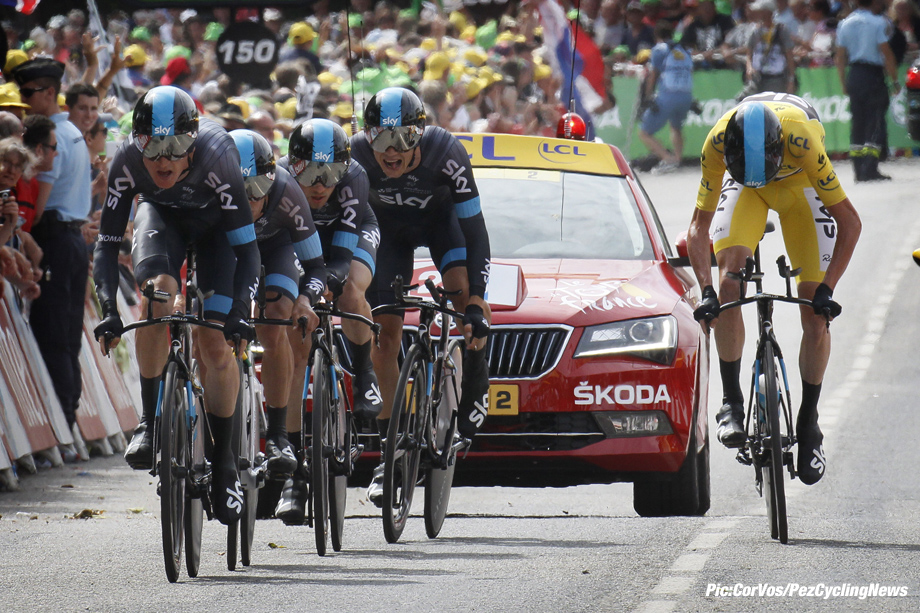 Sky lost by 1 second, but Froome was safe in yellow

One second is the deficit; four seconds covers the first three times – now, that was a bike race . . .

How Samsung is Making Life on Two Wheels Better Than Ever