Race Report Stage 16: A big break took a big lead to the final climb of the day; Ruben Plaza attacked and had enough of a lead to hold Peter Sagan off on the descent in to the town of Gap. Behind; Vincenzo Nibali jumped away from the other GC men for 28 seconds, time in the bank for later? Another day of Tour excitement.

Stage 16 was probably Peter Sagan’s last chance for a stage win, plus he wanted the green jersey points form the intermediate, so it was no surprise that he was in the break of the day. The leaders had 20 minutes and it was down to who ever would be at the front at the top of the Col de Mente. That man was Lampre-Merida’s Rubel Plaza with Peter Sagan hot on his heals. At the finish the race was in the same position and Plaza took his first win for two years. The GC men were down to a small group and after a few attacks, Vincenzo Nibali escaped for a small lead into the finish. Apart from that all the positions are the same going into the second rest day.

Stage 16 to Gap is mostly uphill; from Bourg de Péage the road drags to the intermediate sprint in Die after 86.5 kilometers and then carries on climbing to the Cat 2 Col de Cabre (1,180meters) at 130 kilometers where the Tour enters the Haute-Alpes. From there the road carries on upward before the descent into Gap and a circuit including the Cat 2 Col de Manse (1,268meters), the summit is 12 kilometers from the finish in Gap. You might remember the descent of the Manse for the crash of Joseba Beloki and Lance Armstrong taking a short cut across a field.

With 165 kilometers still to go, about 50K to the sprint, the front Sagan group had 5 minutes on the peloton with the second group still trailing at one minute. One non-start this morning: Greg Van Avermaet (BMC) has gone home due to his wife about to give birth and British champion Peter Kennaugh (Sky) abandoned in the second hour of the stage.

The situation stayed much the same for the next 40 kilometers; the lead group held the chasers at just over a minute, but the peloton fell back to 6 minutes. Astana took control of the peloton with Etixx – Quick-Step close at hand, but there was no real urgency.

At the sprint, Sagan took the full 20 points ahead of De Gendt and the points leader now has a 64-point lead on Greipel in the green jersey competition. The lead was 5:21 on the peloton and still 1 minute to the chasers.

100K to go and the lead was over 10 minutes on the Sky led peloton. Up front the two groups eventually got together to give a big group of 23 riders on the big escape.

At the top of the Col de Cabre the leaders had 13:20 on the peloton. On the descent Sagan didn’t want to hang around and dropped like a stone, taking chances on the twists and turns. This did split the group, but they got together again. Sagan was not interested in taking a group of this size to the town of Gap and started to make jumps, Grivko had the same idea, but it achieved nothing. 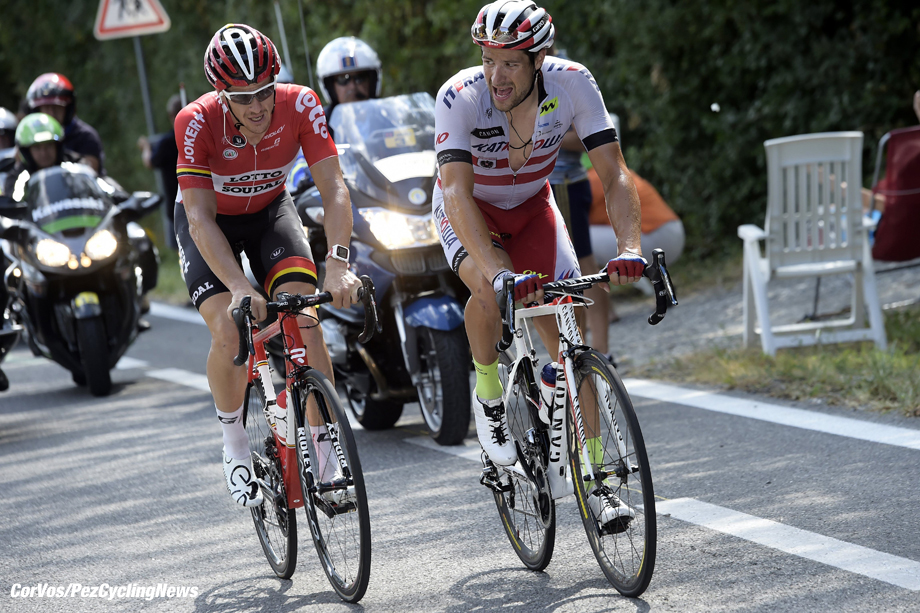 Hansen and Haller went for it early… too early

The peloton had taken the day off (for the moment) and were just chatting and letting the lead go out to nearly 15 minutes with 50 kilometers to go. The break were not easing up and attacks were starting to come, a little split with Boasson Hagen, Golas, Haller and Hansen managed to gain a small lead, but Sagan closed them down.

Hansen again attacked through a little village with 46 kilometers to go, the others in the group just looked at each others, giving the Australian the chance to get a gap quite quickly. Austrian champion Marco Haller (Katusha) wanted to join Hansen and eventually managed to cross, but it took a lot of strength and nearly 5 kilometers to do. Back in the peloton: Sky came to the front and started to ride.

35 kilometers to Gap
The lead for Hansen and Haller was 36 seconds on the Sagan group and now 16:50 on the peloton. 5 kilometers later they had 50 seconds, the lead to the bunch was now going towards 18 minutes. To succeed the two leaders would need more than 2 minutes at the start of the final climb of the Col de Manse as there are a couple of good climbers in the chase group; Teklehaimanot, Pantano and Voeckler could pull them back on the assent and Sagan could get with them on the descent.

20K to the line
Through the outskirts of Gap and the two leaders had nearly 2 minutes on the chasers as they started the climb of the Manse and the peloton were at 20 minutes. Gerschke was the first to go from the chase group, which was splitting. Geschke was joined by Sagan, Teklehaimanot, Plaza and Riblon.

Riblon closed on Hansen and Haller, which launched Plaza off on his own as the Australian and Austrian were dropped. Riblon didn’t want Voeckler to get across to the group and jumped to inspire the others to ride harder. It didn’t work and Voeckler came across with De Gendt, Mate, Jungels and Pantano to give a chase group of nine behind Plaza.

Meanwhile Sky were trying to hold the bunch together at the start of the climb.

At the top; Plaza had just over a minute on the Sagan led group as Tinkoff-Saxo moved to the front of the peloton and Richie Porte went out the back. Plaza pushed on and with 10 kilometers to the finish; he had 56 seconds on the group and as expected Sagan dropped like a stone with Pantano on his wheel, or trying to stay on his wheel. Past the point of the Beloki crash and Sagan nearly relived the crash.

In the peloton all the main riders were in a group and watching each other. 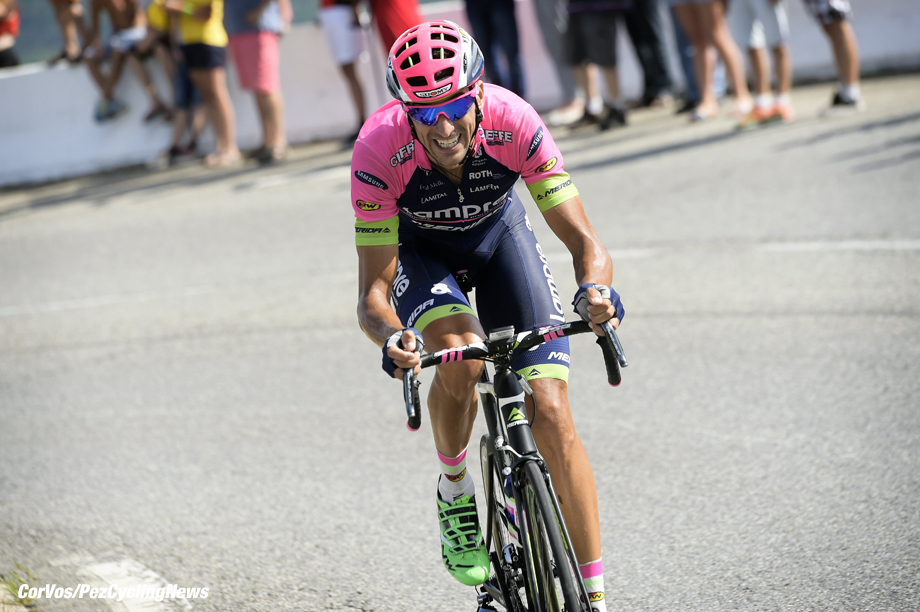 The win for Plaza
Sagan was on his own as Pantano wasn’t willing to kill himself. The green jersey was making up time, but was it going to be enough? With 2K left and a gap of 30 seconds it was going to be just too much. Into the final straight and the final meters and Ruben Plaza knew he had the win. The man from Alicante had time to raise both arms in the air as he still had 30 seconds on Sagan with Pantano not far behind.

The GC group
The GC men were being led up the climb by Scarponi with Contador on his wheel, Froome, Quintana and Valverde just behind. Bardet jumped away, Valverde led a halfhearted chase with the others watching. Next to go was Barguil, this set Contador off and then Nibali, but Robert Gesink lifted the pace to keep his 7th overall place. Froome had two Sky riders in the group and they were put on the front to hold Nibali close.

The only top man missing from the GC group was Tony Gallopin (Lotto Soudal), he was with Pinot at 3 minutes, and all the others were present. Warren Barguil took a bend too fast and hit Geraint Thomas sending him into a telegraph pole and down a ravine as Valverde led the group on the descent at 16 seconds behind Vincenzo Nibali. 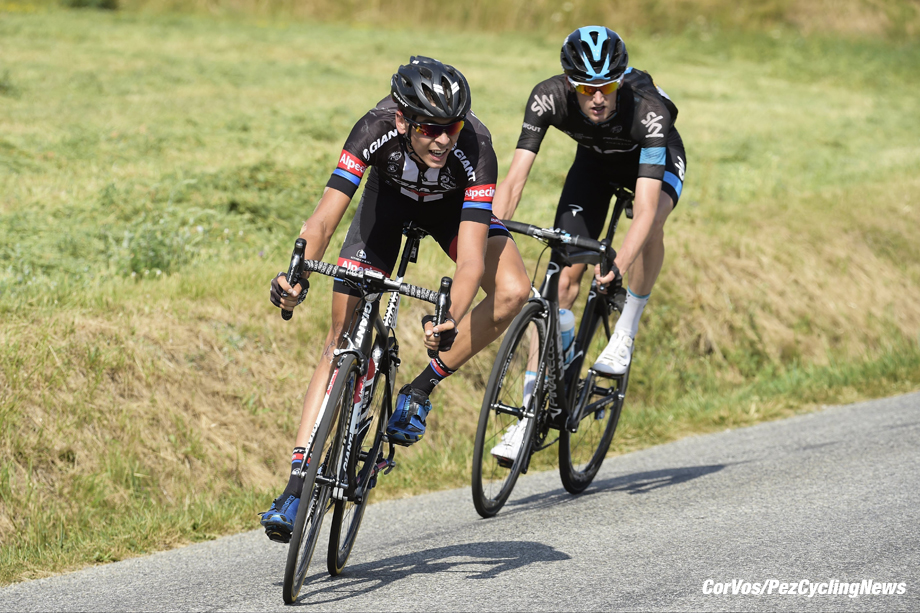 Barguil bumped Thomas off the road and into a pole, all OK though

Nibali crossed the line 28 seconds ahead of the Froome group and Geraint Thomas came riding down the finish straight on the wheel of Poels, looking none the worse for wear.

Great solo win for Ruben Plaza, a few more seconds for Vincenzo Nibali, no stage win for Peter Sagan and a big shock for Geraint Thomas, but the overall is much the same as this morning, apart from Tony Gallopin dropping from 9th to 11th overall.

Keep it PEZ for Ed Hood’s first day on the 2015 Tour de France coming up later and everything behind the scenes on tomorrows rest day.