Race Report: A super-hard day in the Alps with seven categorized climbs including the long climb of the Glandon and the mini-Alp d’Huez of the Lacets de Montvernier. Romain Bardet escaped into the early break and then left them on the climb of the Glandon to solo the last 40 kilometers to the line in Saint Jean de Maurienne. Two stage wins for the French this year, a big change.

You don’t hear the phrase ‘the French riders fought it out for the stage win today’ very often these days, but today it was French rider action all the way. Attacks and regroupings were the order of the day, some of it was amongst the top GC riders, but in the end all moves were neutralized for a stalemate.

Stage 18 route: Gap to Saint Jean de Maurienne, 186,5 kilometers with seven categorized climbs. The first climb comes straight after the start line; the Col Bayard (Cat 2), the next at 35,5K, Rampe du Motty (Cat 3), Côte de la Mure (Cat 3) 60,5K, Col de Malissol (Cat 3) 70,5K, then at 85 kilometers the Col de la Morte (Cat 2). The big climb of the day is the HC category Col du Glandon comes 40 kilometers from the finish, but there is the Lacets de Montvernier (Cat 2) with its 18 hairpin bends with 10 to go. The KOM competition could be won today.

Non-starter this morning was MTN-Qhubeka’s Louis Meintjes, the 23 year-old fell ill yesterday morning, but battled through the 17th stage, to finishing in a lot of pain. He was taken straight to hospital and will spend another night in hospital today for further observation. It was discovered that Louis has Gastroenteritis, causing his severe stomach pain.

After 15 kilometers they had a lead of 1:35 over the yellow jersey group and after 25 they had 3:30. At the top of the Rampe du Motty; Rodriguez took full points and moved closer to taking the lead from Chris Froome and the lead grew to 4:50. Sky, Trek and Giant-Alpecin were leading the peloton, Trek for Bauke Mollema and his 9th place overall and Giant for Warren Barguil in 10th, Bardet, Talansky and Rolland were the danger men that could jump into the top 10.

Rohan Dennis (BMC) made a short attack before the climb of the Côte de la Mure, but he was pulled back before the climb. Again Rodriguez took the summit and the points on the Mure to draw level with Froome. The group split, but came together again before the Col de Malissol and the Katusha man was first over the top to take the KOM lead. Giant and Trek had kept things going in the peloton and held the leaders at 5 minutes, but that was not to last long as by the start of the Col de la Morte they had been pulled back to under 4 minutes.

Into the last 100K
Rodriguez made sure he was at the front crossing the Morte for the maximum points and Giant-Alpecin led the bunch down the twisty descent. The break had split again on the descent under the pressure of the AG2R-La Mondiale riders, but in the valley before the Glandon they regrouped after a long chase from the back markers, especially Voeckler.

Intermediate sprint
Lotto Soudal’s Thomas De Gendt jumped before the sprint in Riouperoux (107,5km) and carried through the effort to be joined by around 8 other riders, but then went again. There was a coming together behind him and another split, the speed was high, but there was no cohesion and riders were trying to escape in ones and twos. The lead fluctuated between 2:30 and 3:20 to the bunch as De Gendt had around 30 seconds on the others in the break.

With 61 kilometers to go, De Gendt was caught as they started to climb the Glandon. The climb had the expected affect on the break and it was split to a group of around a dozen, but that number got smaller as riders were dropped, most notably Thibaut Pinot, although he managed to fight his way back.

Nico Roche was leading the bunch for Sky as they pulled the dropped riders in. The yellow jersey sat comfortably in the second line of riders with Movistar’s Nairo Quintana just behind him at one side and Alejandro Valverde on the other. 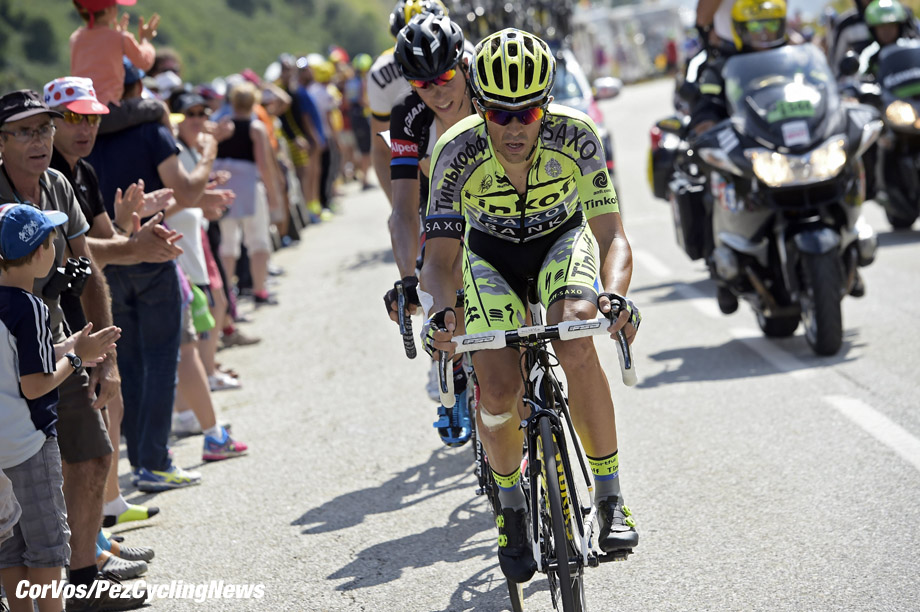 Alberto Contador (Tinkoff-Saxo) made a bold attack on the Glandon, but it came to nothing.

50 to go
The leaders had 3:24 on the chase group with 50 to go to the line in Saint Jean de Maurienne, but the top of the super long Glandon was a long way away. Warren Barguil (Giant-Alpecin) rode away from the bunch with Baulka Mollema (LottoNL-Jumbo) and Mattias Frank (IAM Cycling) crossing to him as they caught and dropped Voeckler. Richie Porte and Wouter Poels were dropped leaving only Roche, Thomas and Konig to look after Froome.

Alberto Contador (Tinkoff-Saxo) made an attack and it looked like Nairo Quintana (Movistar) was going to go with him, but decided not to – Sky did nothing. It didn’t take long for the Spanish rider to cross to the Barguil group with 5 kilometers to go to the summit.

Rolland jumped from the front group and took Bardet and Fuglsang with him. As the others fought back to him it looked like a passing moto clipped Fuglsang and knocked him off. Bardet pushed on and split the leaders as they came to the summit.

Nibali jumped the yellow jersey group to be chased by Valverde, he waited and jumped again, this time to be chased by Quintana. Valverde and Mollema lost contact just before the top of the Glandon, but they should get back on to the Froome group on the descent.

The Glandon summit
Bardet was first over the top with Winner Anacona, although Anacona couldn’t hold the Frenchman’s wheel on the descent. The back groups closed up coming off the Glandon, Valverde made it easily, whereas Mollema didn’t have the same downhill skills.

As the madness of the descent was behind the riders, the situation in the race had Bardet out front with 2:38 on the Froome group, which now included Contador, Quintana, Valverde, Sanchez, Nibali, Rodriguez, Thomas, Frank and the other top men. There was a group between at 35 seconds, which included Rolland, Fuglsang, Jungels, Talansky, Anacona, Gautier, Pauwels and Damiano Caruso, who were the remnants of the break. 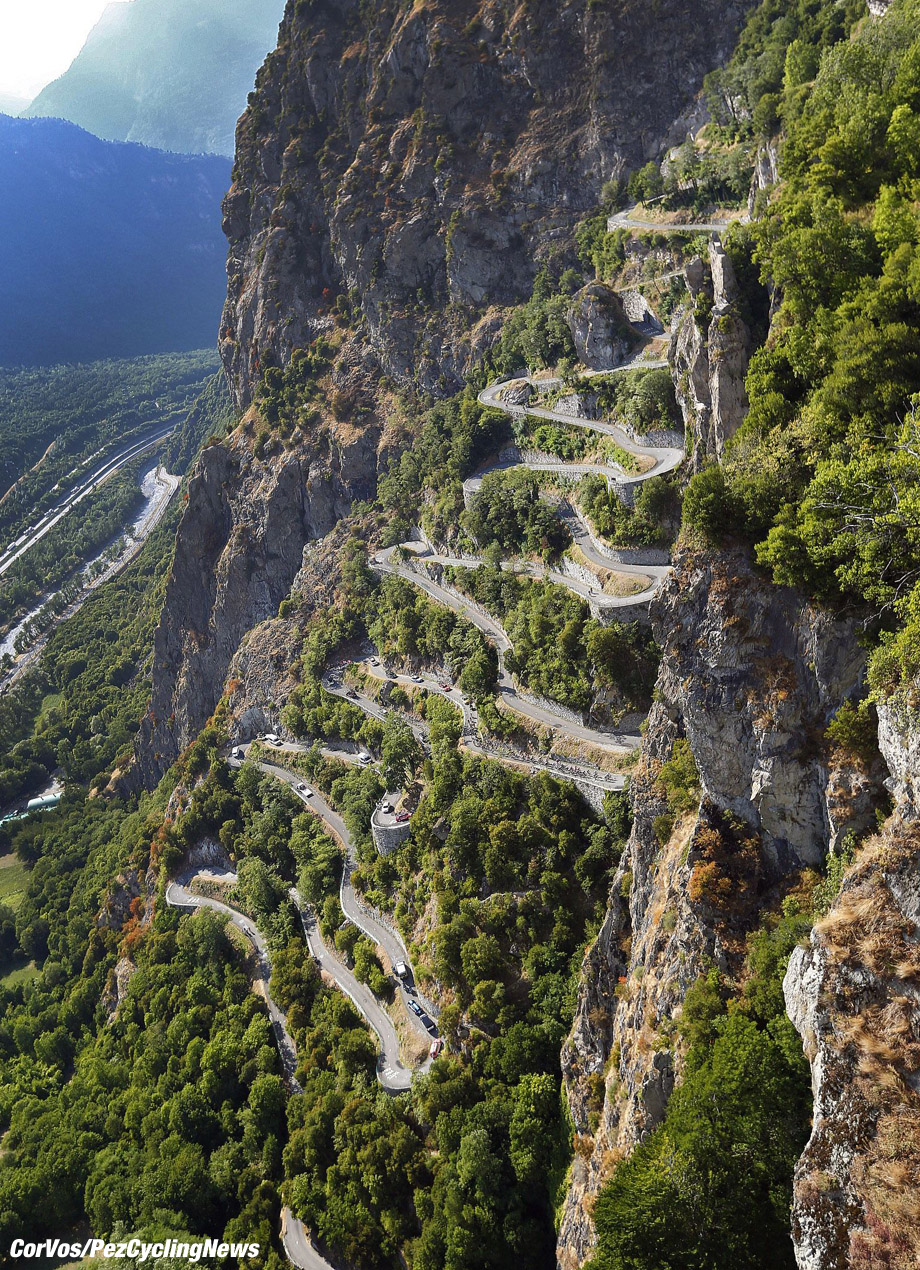 The Lacets de Montvernier
Jungels, Gautier and Rolland attack from the chase group, with Anacona holding them, at the base of the crazy climb of the Lacets de Montvernier with its 18 twists and no fans. Fuglsang joined them. Tinkoff-Saxo put Rafal Majka on the front of the Froome group to drag Contador free; it didn’t quite work, but did dislodge Mollema and Barguil out the back. Bardet crossed the summit line with a lead of 40 seconds over the Fuglsang group and 2:41 over the yellow jersey group led by Nibali. Froome sat at the back of the group and now only had Thomas with him from the Sky team.

5 out
The last 5 kilometers and Bardet had 42 seconds on a solo Rolland and 3 minutes on the Froome group with Mollema and Barguil a further 20 seconds back. Bardet was going full out for the stage win, whereas Rolland was struggling with the pedals and the group of GC men looked to have called a truce for the day. 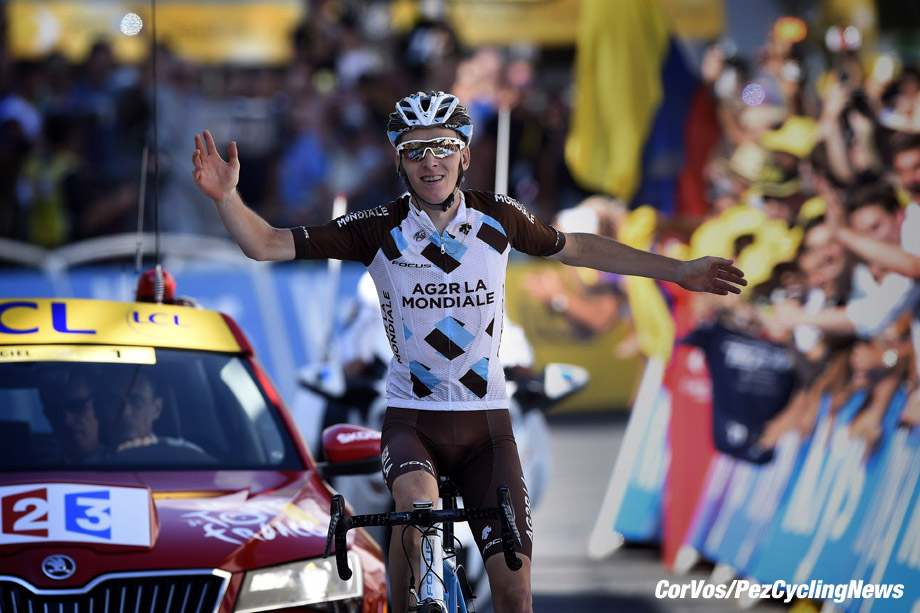 Bardet fought hard for the win

Into the finish straight and the Frenchman hardly had the strength to raise a fist in celebration and wobbled over the line. Rolland tried his hardest, but had no chance of catching Bardet. Mollema and Barguil managed to re-catch the yellow jersey group and they fought out the sprint. All the top men were in attendance and everything stayed much the same as yesterday, the only change was Bardet moving into 10th overall. 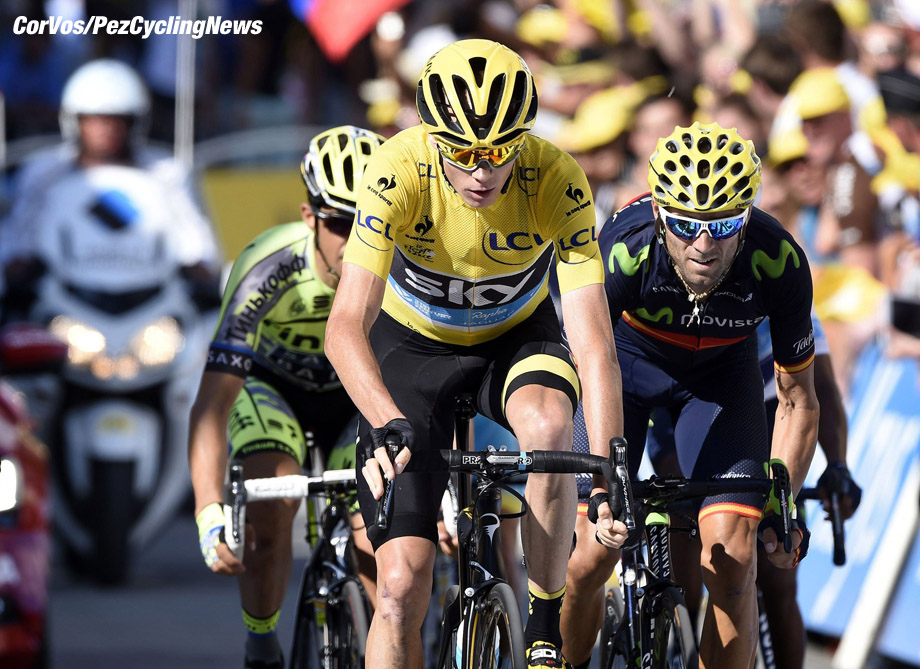 All the top men finished together

At the end of the day Joaquim Rodriguez was presented with the polka-dot jersey, but he has the same points as Romain Bardet. Is this the only battle left?

Find out what Ed and Callum have been up to today in the Alps later. Keep it PEZ.