Roadside Stage 1: Anticipation comes in many different forms: nervous, expectant, pressured, feared. The first Saturday in July 2015 sees dreams fulfilled for some, the next obvious step taken by others, and for a select few the seemingly impossible coming true. 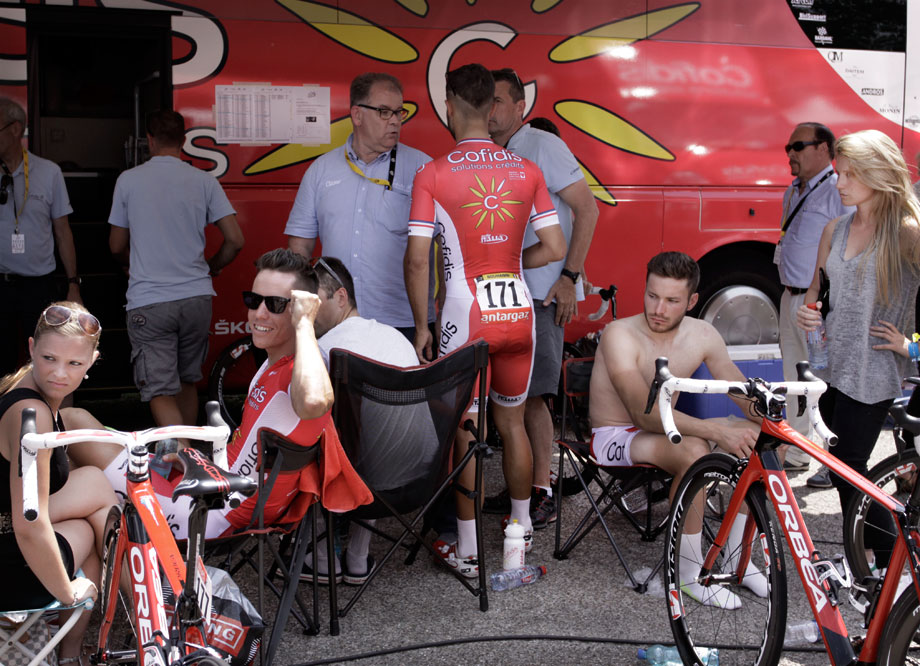 The opening individual time trial is 13.8 kilometers around Utrecht, and there are no major obstacles. It’s a course for someone who likes to smash it; there’s no room for finesse here. It’s an ideal distance for a trackie, or a Brit brought up on a diet of ten mile time trials; Wiggo would have been a shoe-in for this if he was around.

The 2012 champion has left the road, however. Today is about new dawns and new stories being written. 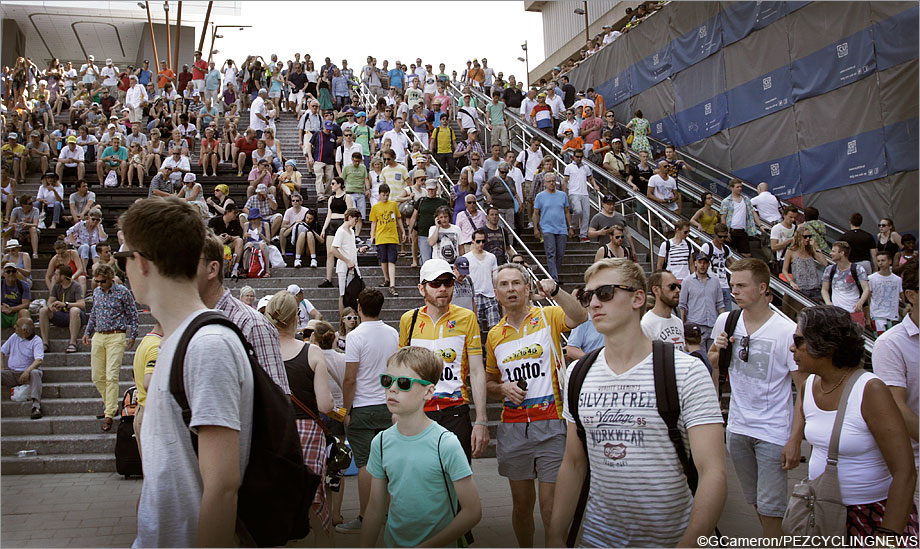 The city center is mobbed, almost beyond belief in such a glaring heat. The Tour brings out the survivor in rider and spectator; those racing will hang on to the outer limits of pain tolerance to keep going while the roadside fans will stand under the blazing sun for hours to watch the race. 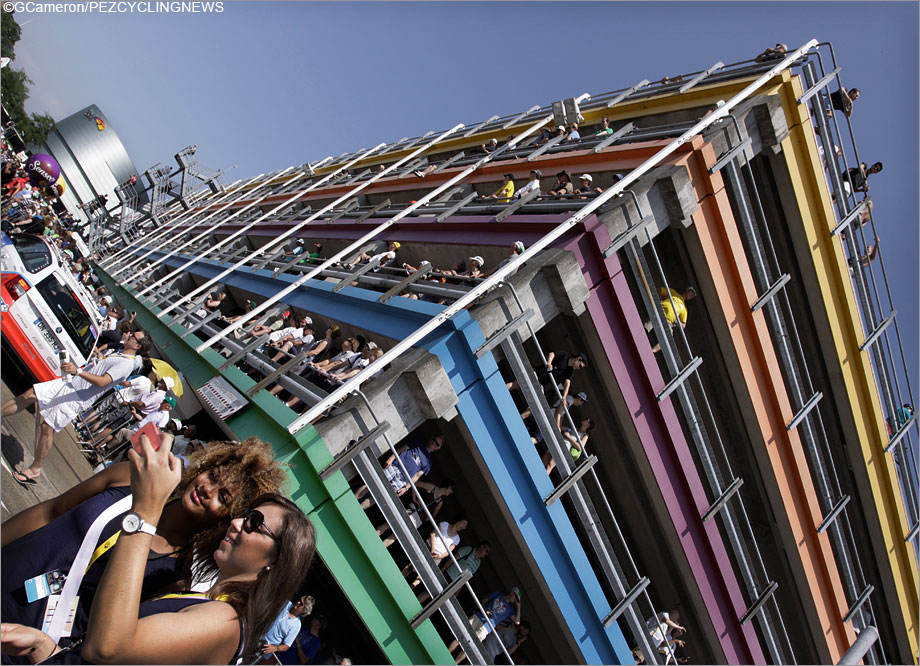 The riders swish around the circuit from early in the morning. Lars Boom is prominently cruising about, jaw set in firm determination to put on a show despite Astana’s run-in with the MPCC over his low cortisol levels. The Giro champion Alberto Contador knows all about anticipation, and how to deliver on it, so this Tour is probably nothing new. 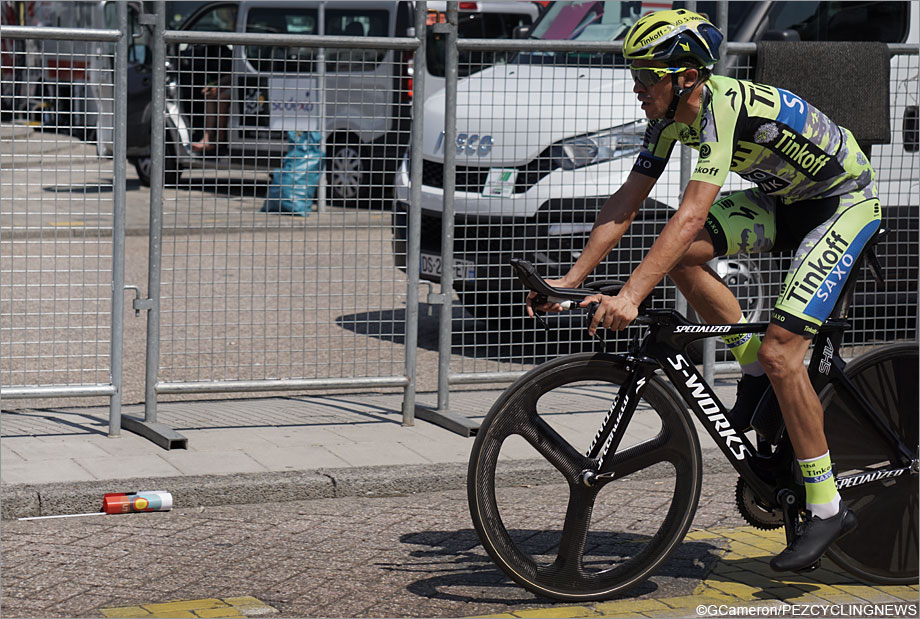 The Grand Depart is a time where everyone wants to come and hang out; friends, family, sponsors, hangers-out and hangers-on. It’s the build up to the event that is different; they’re nervous for their riders, husbands, colleagues … the riders are nervous for themselves and how they’ll perform. 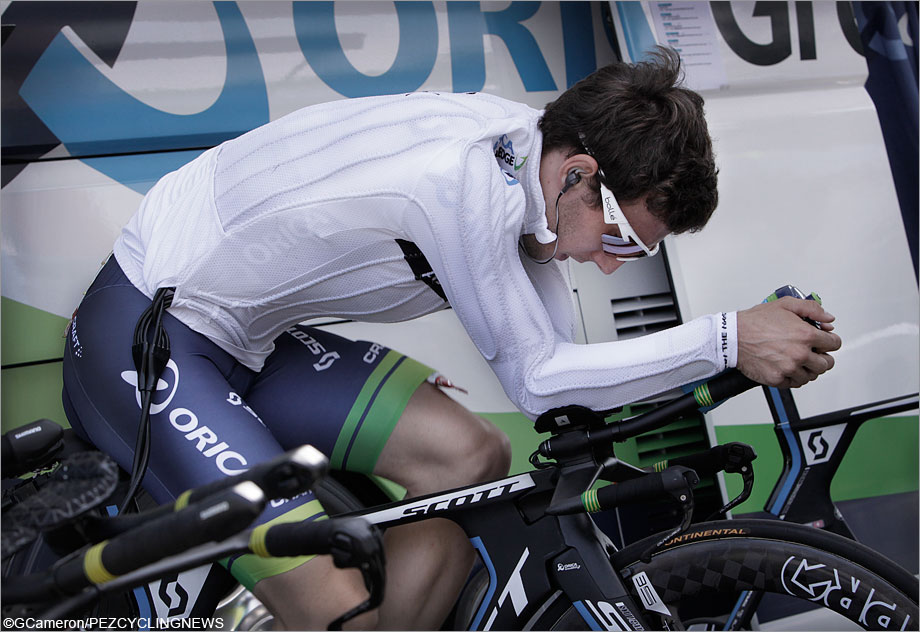 While some are looking at the small details, for other organisations it’s all about the bigger picture, loftier goals and dreams coming true. 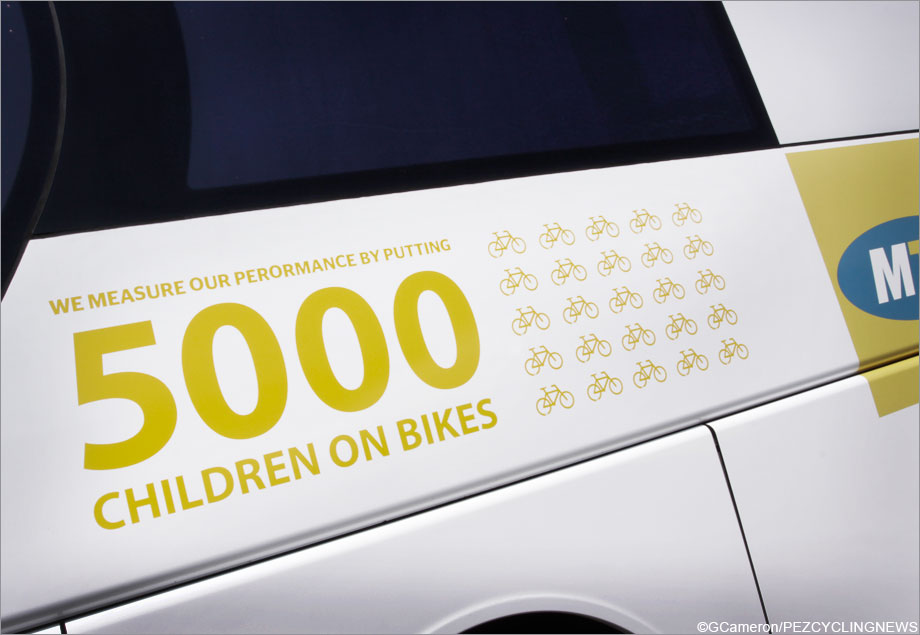 Anticipation of what the Tour can mean for African cycling is palpable around the MTN-Qhubeka bus where Anthony Fitzhenry of the Qhubeka Foundation is swapping bracelets for money. The team is about to start it’s first Grand Tour, on the biggest stage. They’ve known for months, and the excitement has been building. 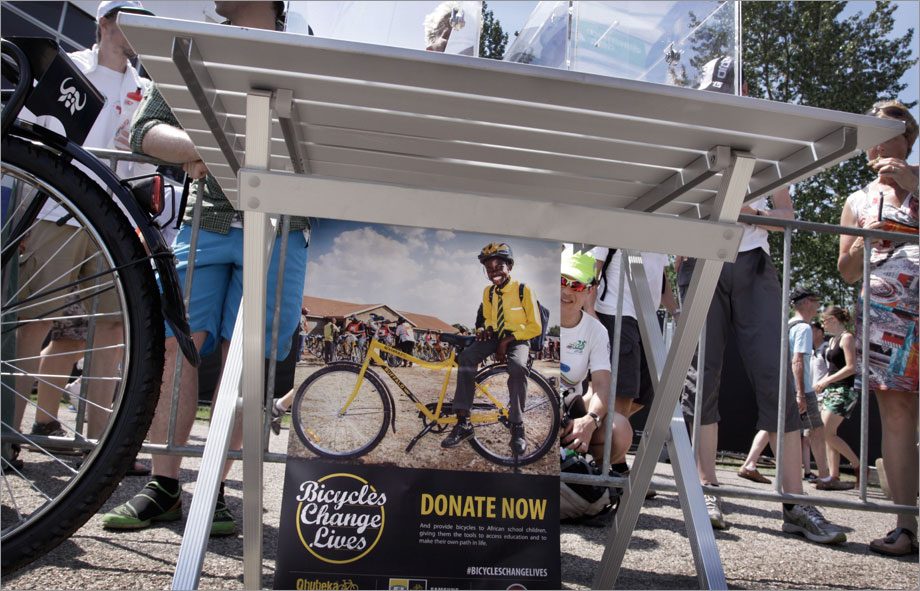 “This whole process is all about development for us, taking the sport of cycling to a new level in Africa. There are one billion people in Africa, where there is a need for bikes and a huge market for cycling and cycle sport. 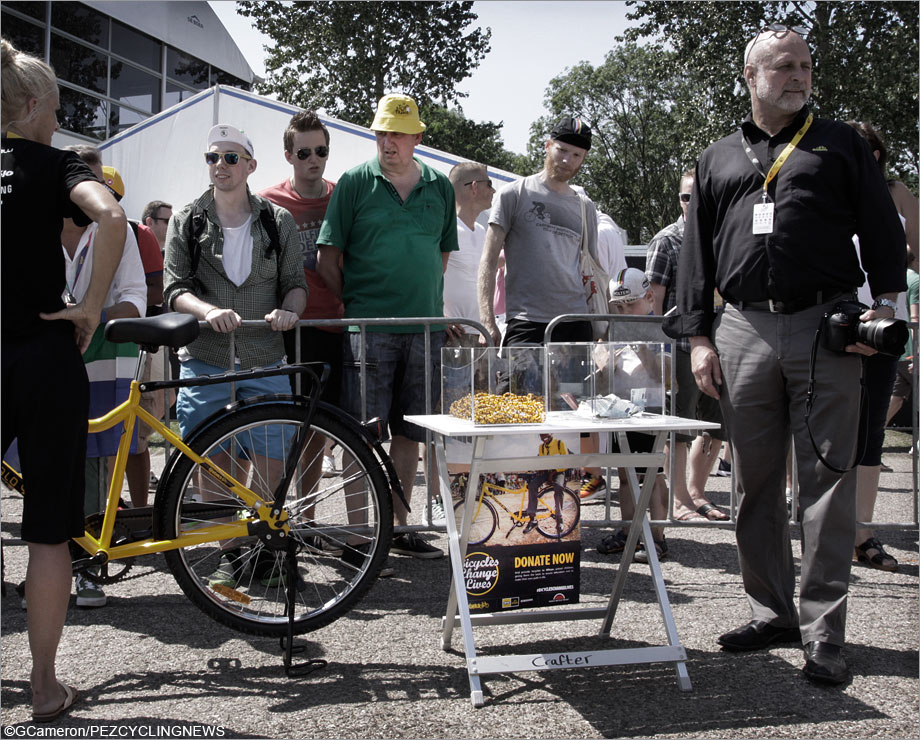 “It is an absolute and huge honour for us to have been invited to the biggest race in the world, and we are delighted that our rider Daniel Teklehaimanot will be the first rider to start. He is a massive talent, and there are people here from all over the world to see him and the team race. 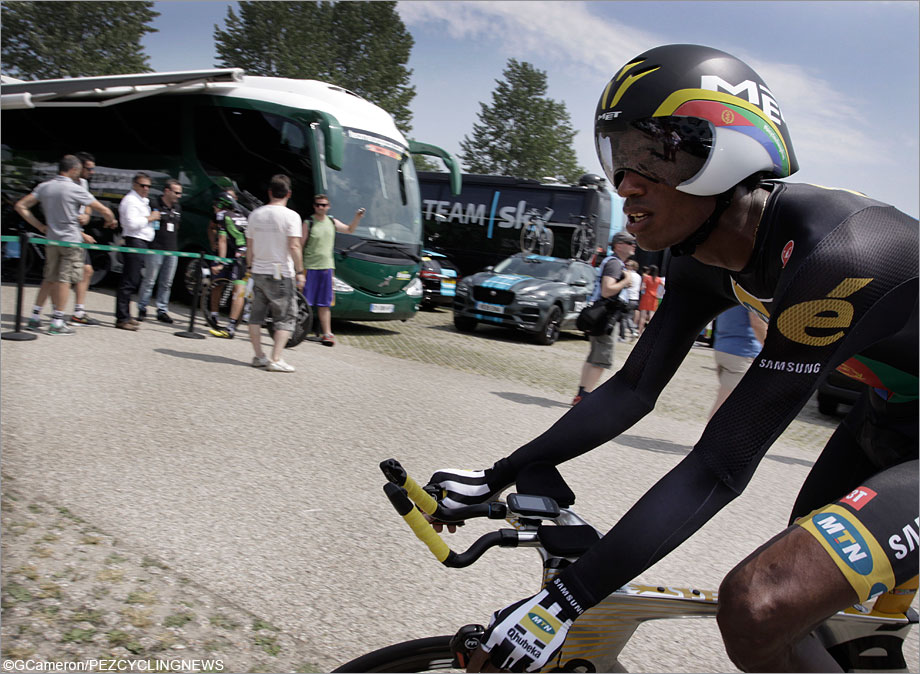 “We are an African team, and we are making history today, with the first black African riders to take part, and we hope that this will help bring what we aim to do to a new level. We have an international staff and international riders with an African heart to the team. 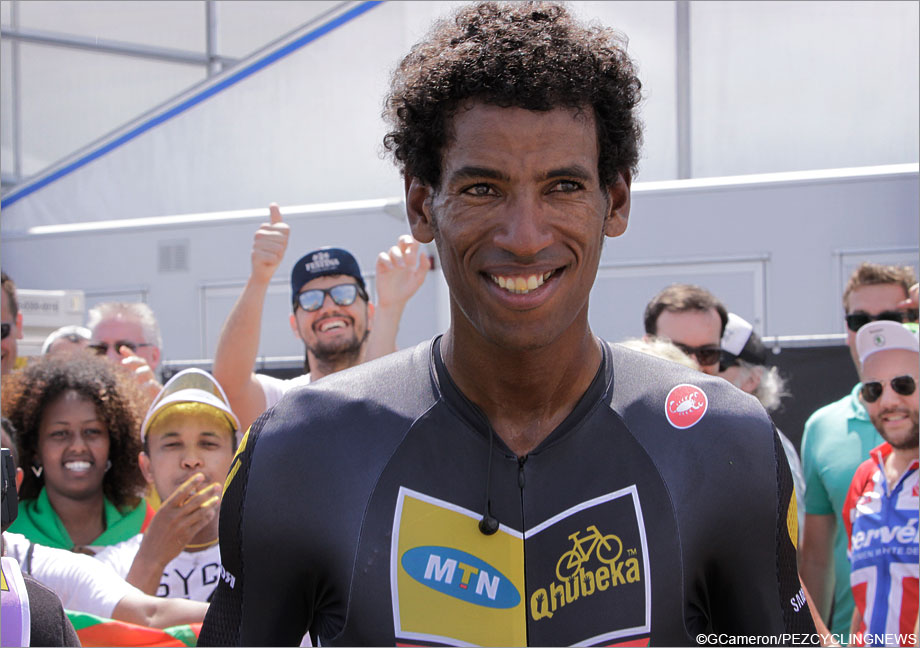 “As a whole, the cycling community is incredibly generous. The reception here has been phenomenal in Holland especially, I think, because cycling is such a part of the culture. Adults understand that without a bike, it can be a very long way to walk to school for their children, so they know why we wish to make more bikes available to people in Africa. It is truly something that can change lives. 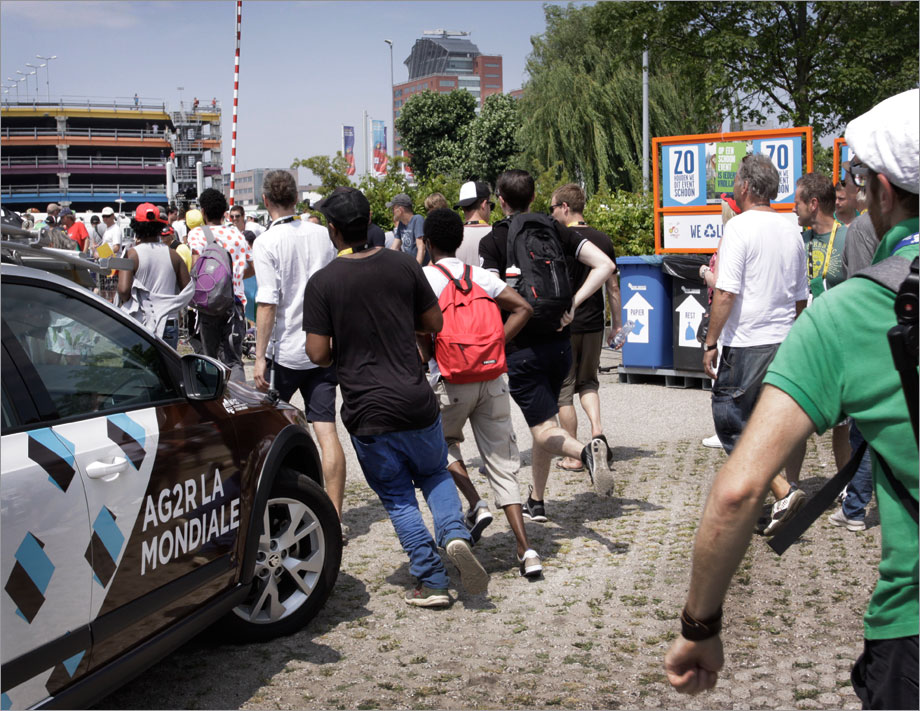 Teklahaimanot has done his warm-up and when he sets off he is followed by a crowd of well-wishers; there are Eritrean flags and t-shirts peppering the crowd and he gets a colossal reception as he arrives at the start line to have his TT bike weighed. 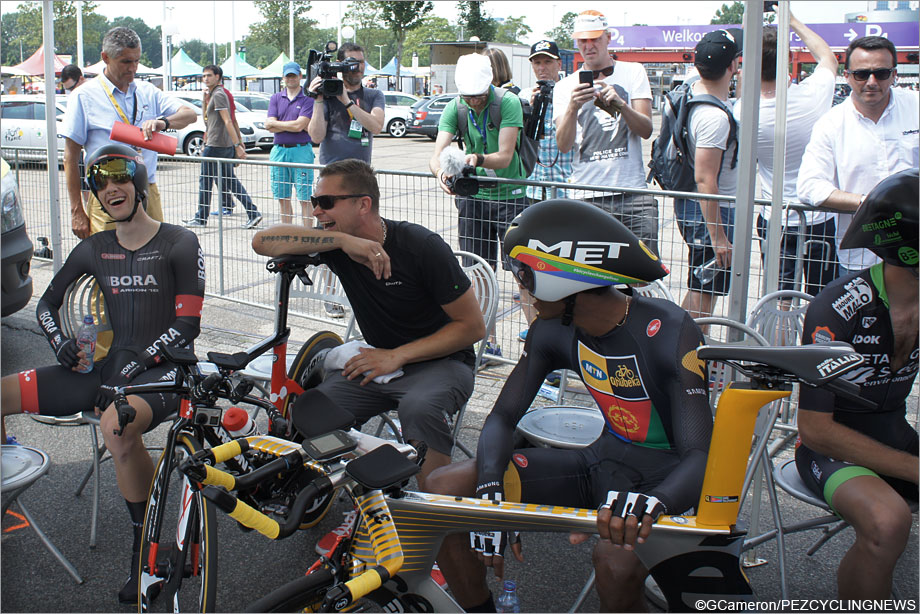 Another newcomer anticipating a Tour debut is Ireland’s Sam Bennett, and the two share a laugh and a joke as the big digital clock clicks ever closer to the Eritrean champion’s 2.00pm appointment. Daniel’s career has been boosted by the UCI’s World Cycling Center, but often derailed by circumstances outwith his control, with visa problems a common hindrance early on. 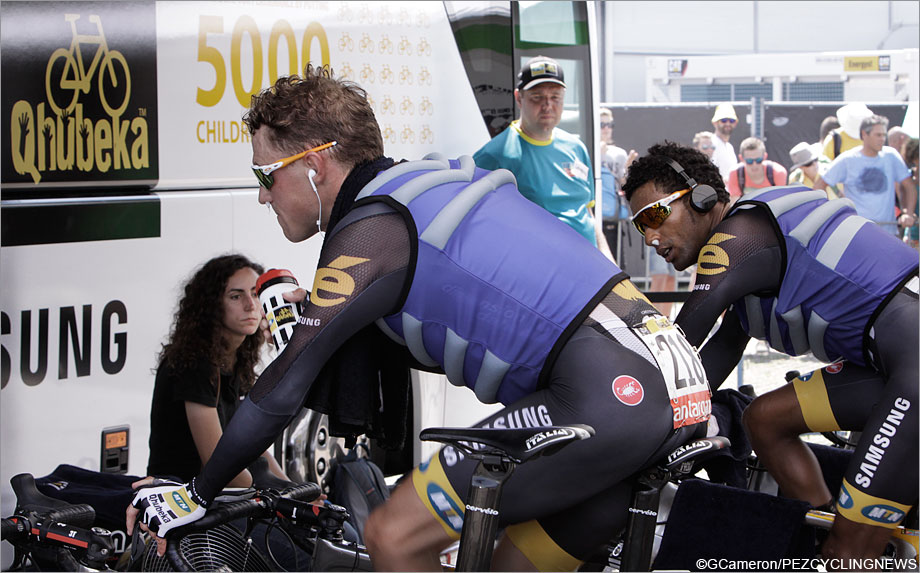 He’s got a countryman here – Merhawi Kudus is starting, too. I catch a chat with Castelli’s Steve Smith: “It’s fantastic to have these guys here. They’re no novelty act; these guys are class riders with great talent. You could see what Daniel did when he won the mountains prize at the Criterium du Dauphine.”

Steve flicks through the pictures on his smartphone. Last night, they presented Daniel with his Eritrean champion’s TT skinsuit, but they made him cover his eyes as they brought it in. “It was so cool to see him so excited, he was like a little kid, and he’s going to look so cool out there.” 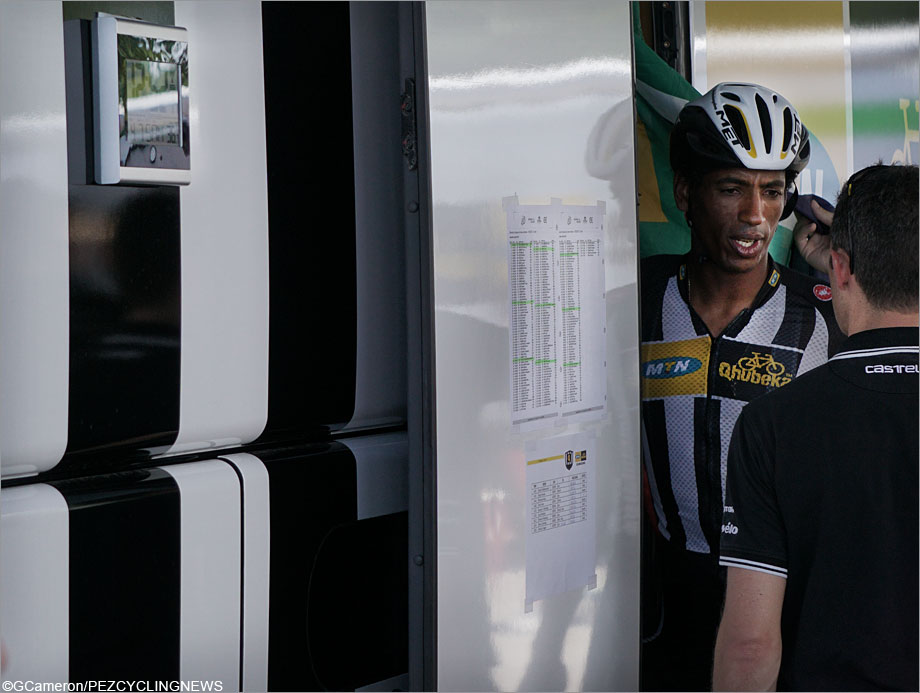 The Eritrean fans are thrilled, exuberant, to see him race. There are the ex-pats who have made a home in Europe as well as a delegation from the Eritrean government; their Minister for Culture and Sport, Tekle Zemede is here, as well as their Counsel for the Eritrean Embassy in the Netherlands, Mehari Solomon. 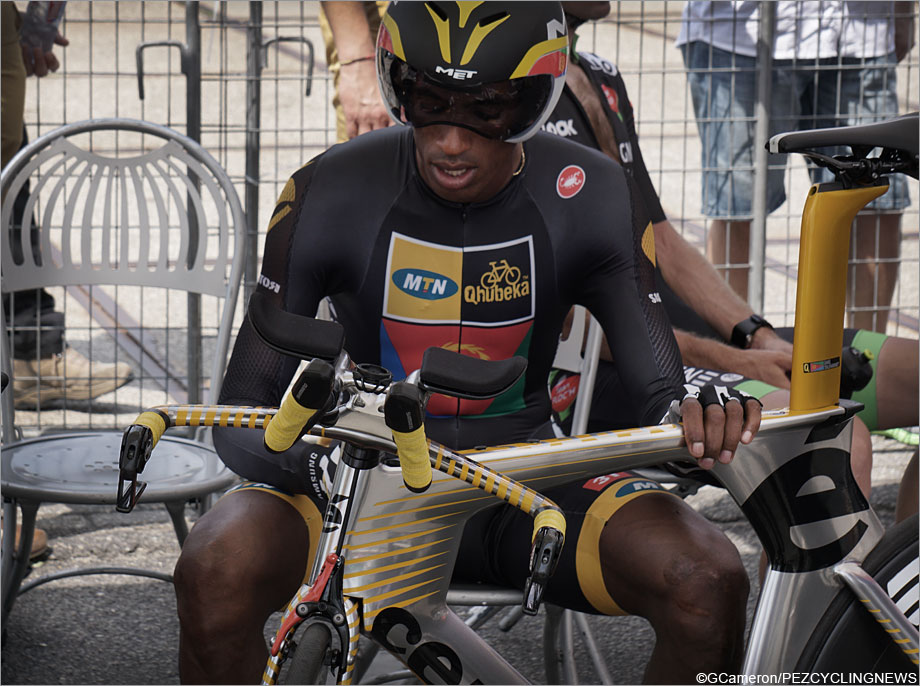 Natnael Nezerab is part of the group, as we photograph him and his pal Jonathan Solomon: “We are a young country so we are making our own history today. It’s a really big story for us to have two riders in the Tour de France. I’m not such a big cycling fan, but, of course, I’ve seen the race on TV. 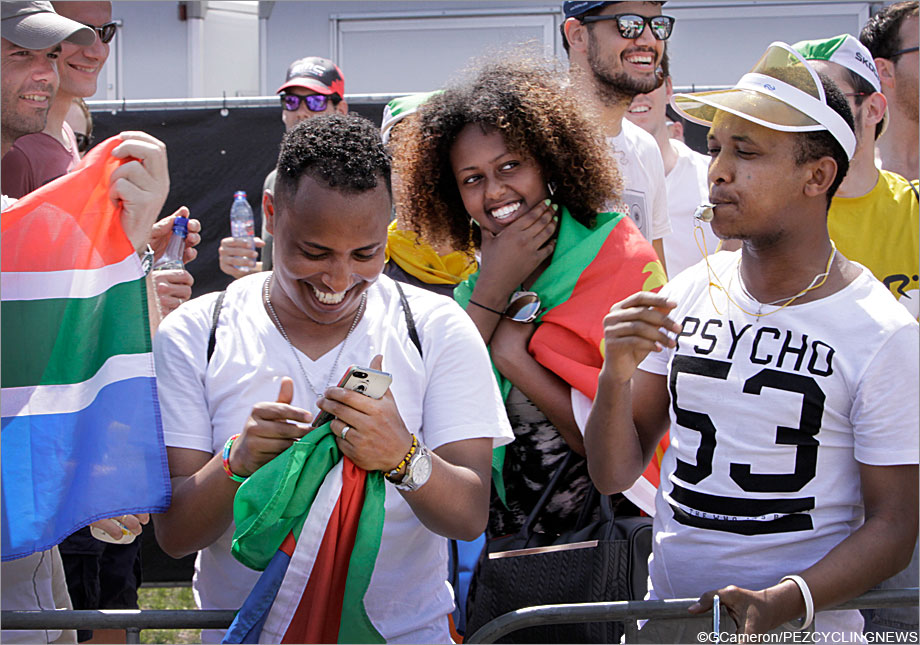 “When people ask where we’re from and we say ‘Eritrea’, most of the time people have no idea where that is. So Daniel and Merhawi are ambassadors for us, for our whole country. That’s why it is so important to have them here. 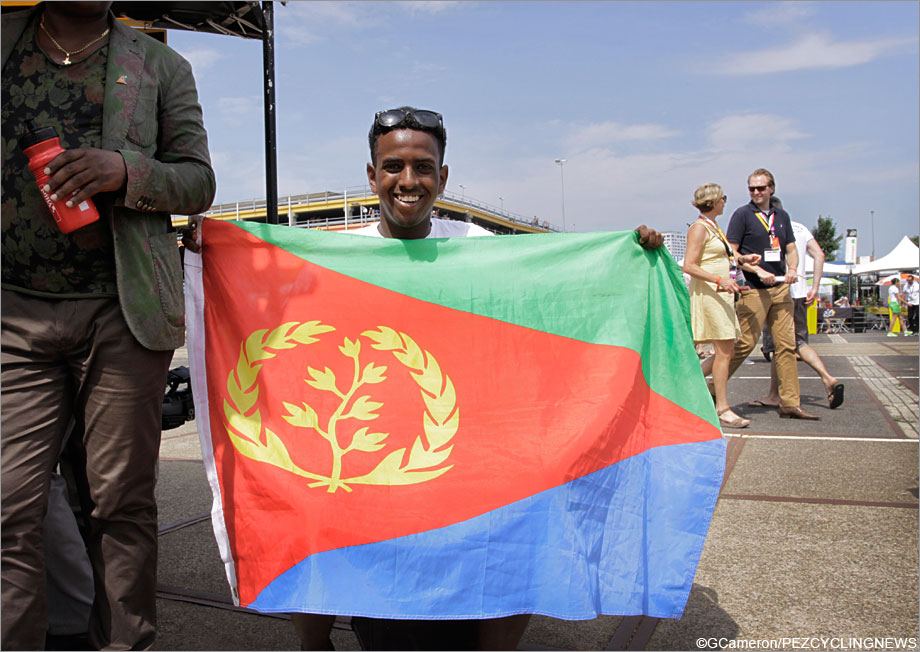 As a follower, yeah, a fan as well, I’ve watched Teklehaimanot’s development from afar. It’s been so frustrating waiting for him to display his full ability – there’s been a semi-Classic win in Spain for Orica-GreenEdge, but 2015 seems to be the time when his strength and consistency is hitting a more even keel. 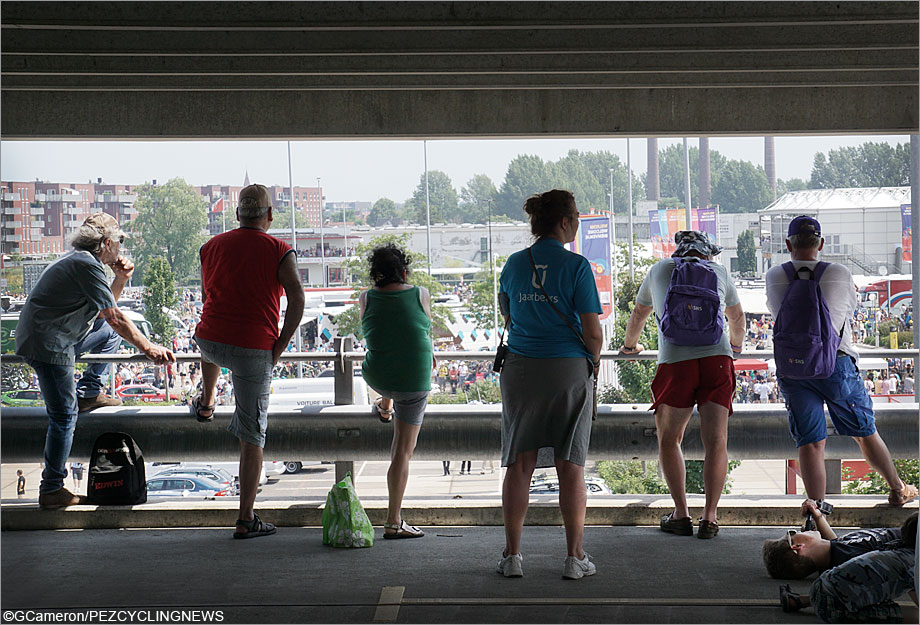 There’s an empty multi-storey car park, which offers a great view of the whole start area, and the fans are smartly waiting it out on the fourth and fifth floors, out of the sun. 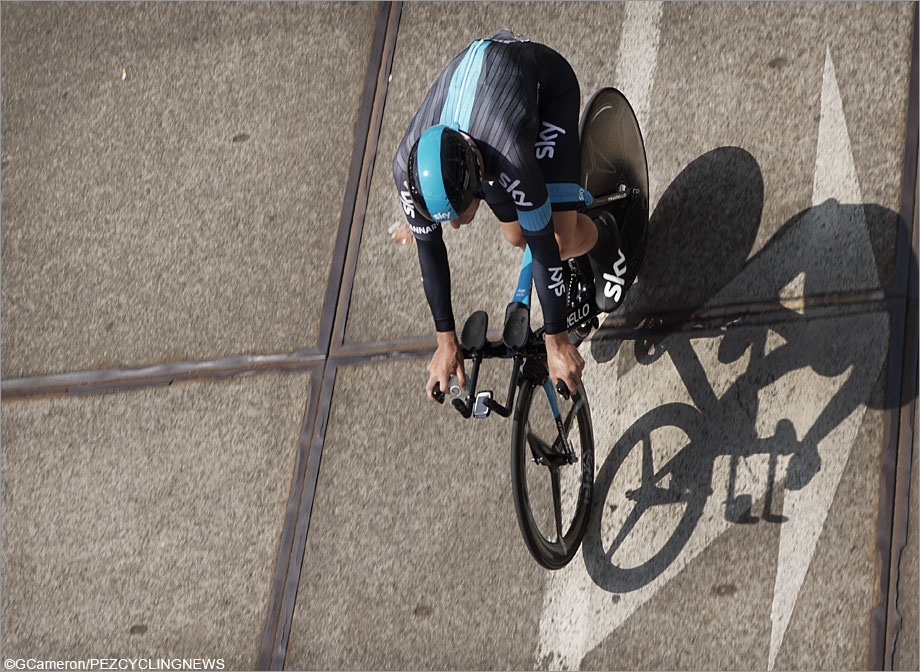 Far below us, the riders are diverted back through the crowds to the busses; I lean over the barriers and watch Scarponi, Chavanel and Stannard head back after their sixteen minutes or so of sun-baking. 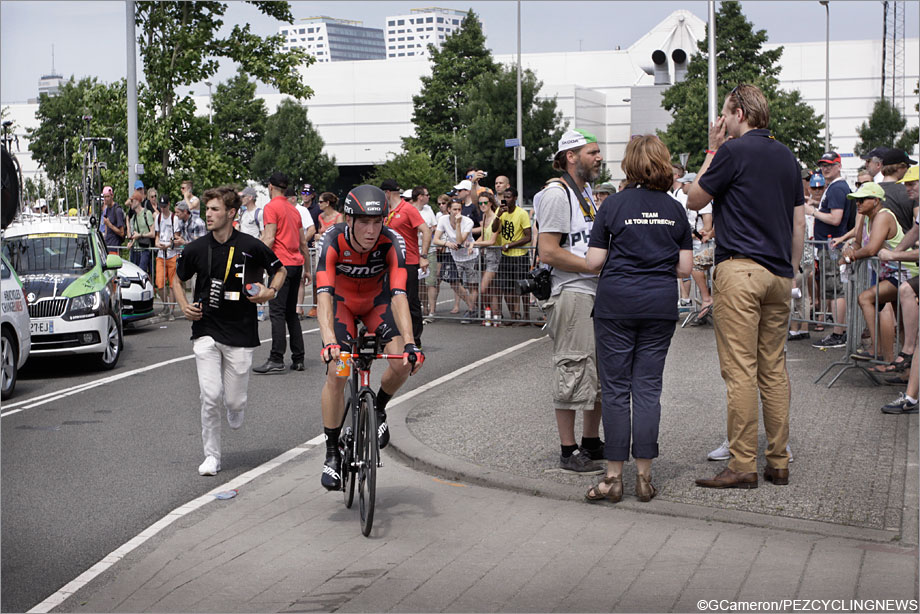 The race of truth is an early one for Rohan Dennis to face; the young Aussie has a long, long wait before he received his much-anticipated yellow jersey in the late afternoon. It’s two hours and more of torture knowing that Martin, Dumoulin, Cancellara and Dowsett are still to finish. 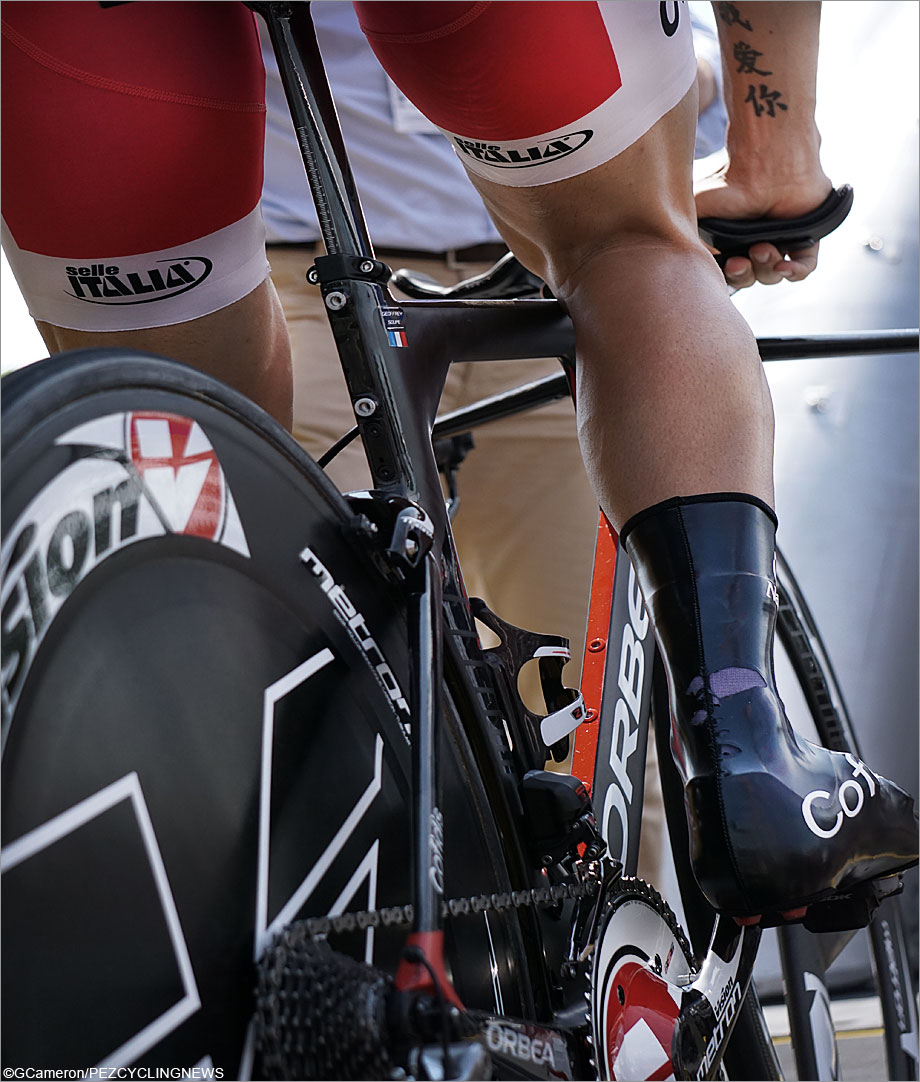 Geoffrey Soupe is also up to the start ramp early, just thinking about getting round because he has a key job to do over the next three weeks; he’s Nacer Bouhanni’s lead-out guy. The Frenchman looks cool, but there’s all sorts of nerves in the holding area.

Tyres are checked endlessly, saddle heights assessed. So many riders try to hold the anticipation of the fast start and the three weeks at bay by spinning the rear wheel, as if checking it runs as true as it did when they left the bus. 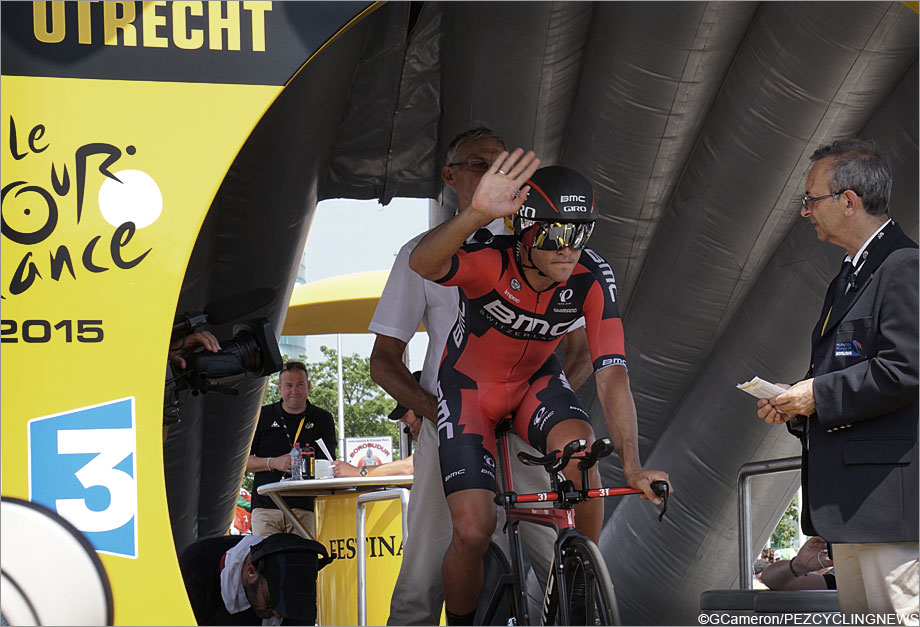 There has not been much seen or heard of Nairo Quintana so far this year, at least compared to his main rivals. 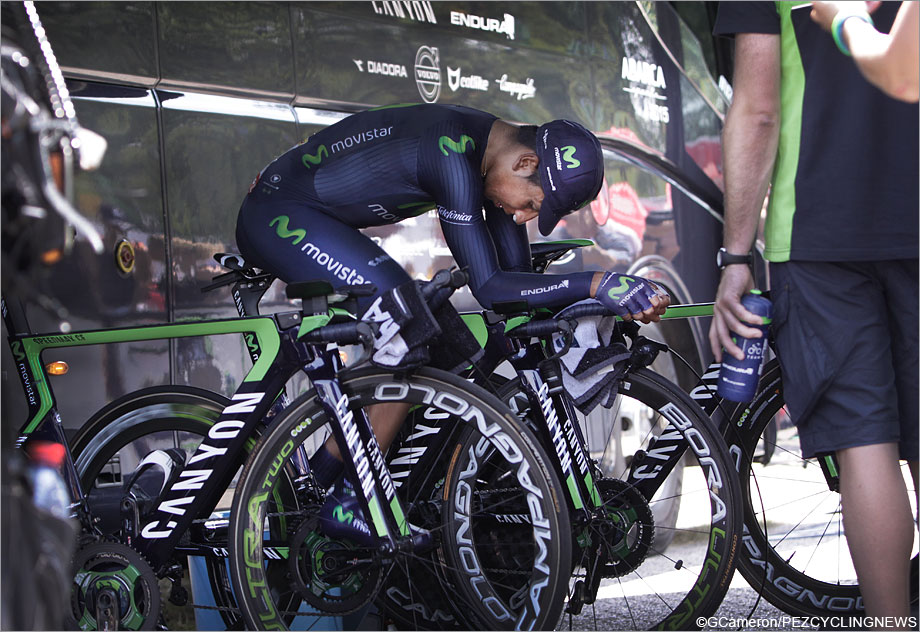 The little Colombian has been keeping his fans waiting today, and the boisterous racket eventually quietens a little when a Movistar staffer emerges to tell them to calm down because Nairo will emerge soon 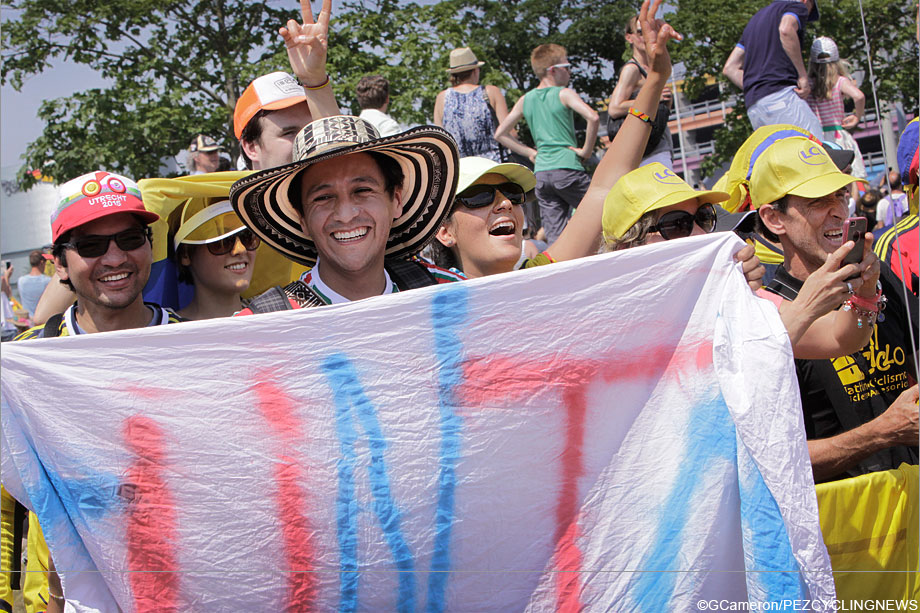 By the time the 2014 Giro winner is out on course, the start village more ghost town. Hardly a soul inside, and the barriers lined two-deep all the way out of the start are. 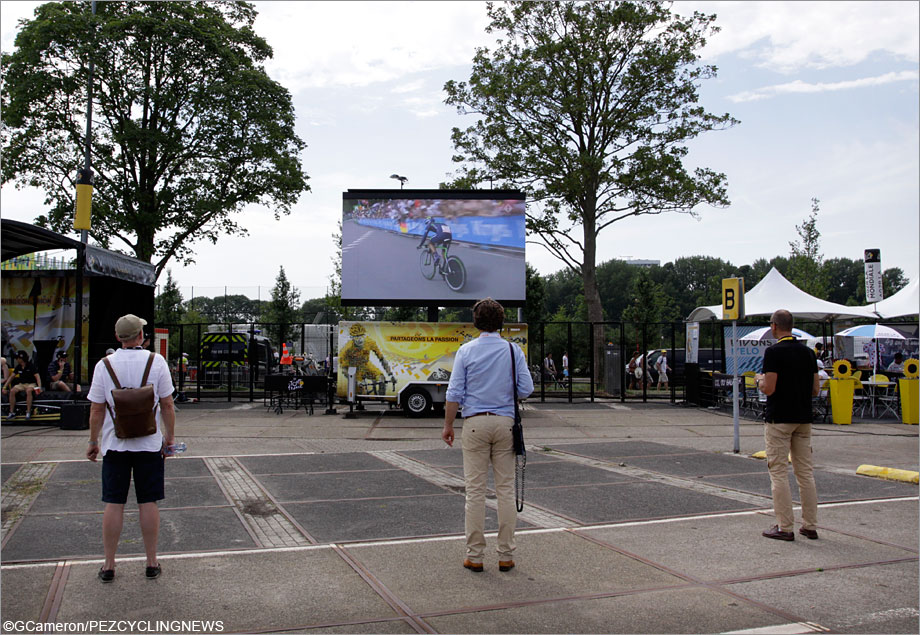 Now, we know. The race is running, and the anticipation is over. From now on, it’s laser focus all the way to Paris.