While the tv commentators do their best to convince us this Tour is an exciting race, Lee Rodgers offers a more sizeable does of reality as we’re left to pretend the battle things not colored yellow actually mean something.

“The battle for the GC rages on!” enthused the commentator as the Froome group galloped over the line at the end of Stage 18 which sounded all exciting except for the fact that it’s blatantly not true. There may have been a bit of raging but there’s certainly nothing resembling a real battle going on. This feels like as already-over a Tour de France as we’ve had since, well, last year. 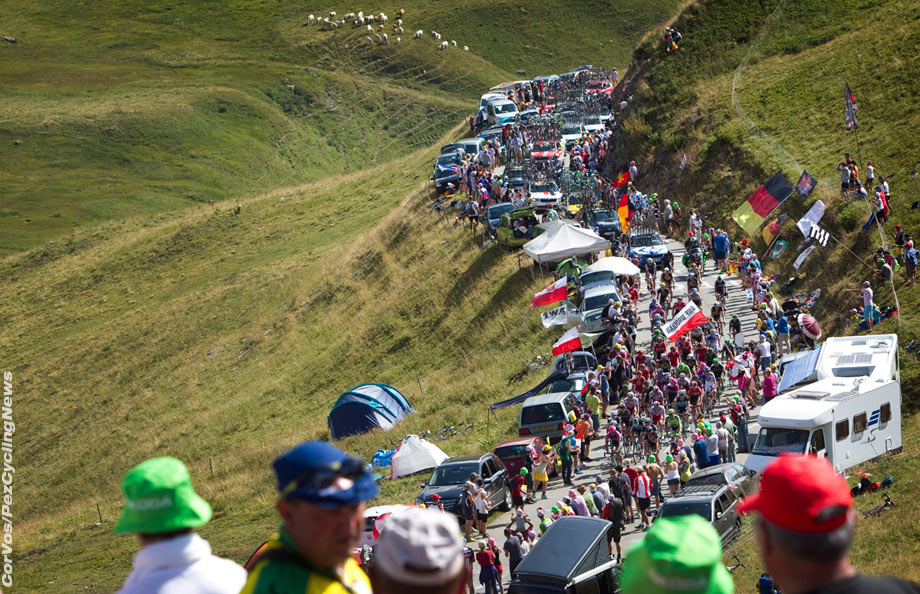 In 2014 it was Vincenzo Nibali who took the GC win and with it held the Maillot Jaune for a whopping 19 stages. Froome has now held Yellow for ten stages and, if he’s to hang on til Paris, it will be 14 days with the jersey on his back. The days of the lead changing hands on decisive stages seems long gone and with Sky and in particular Froome looking so strong I can’t see anything changing all too soon.

Also of course we have to look at how those behind Froome are racing. Quintana is having a go when he can, Contador and Nibali are doing their best to get in attacks too but there is an overriding sense of everyone behind Froome racing either to hold position or to chip away at the man just ahead of them on the GC. 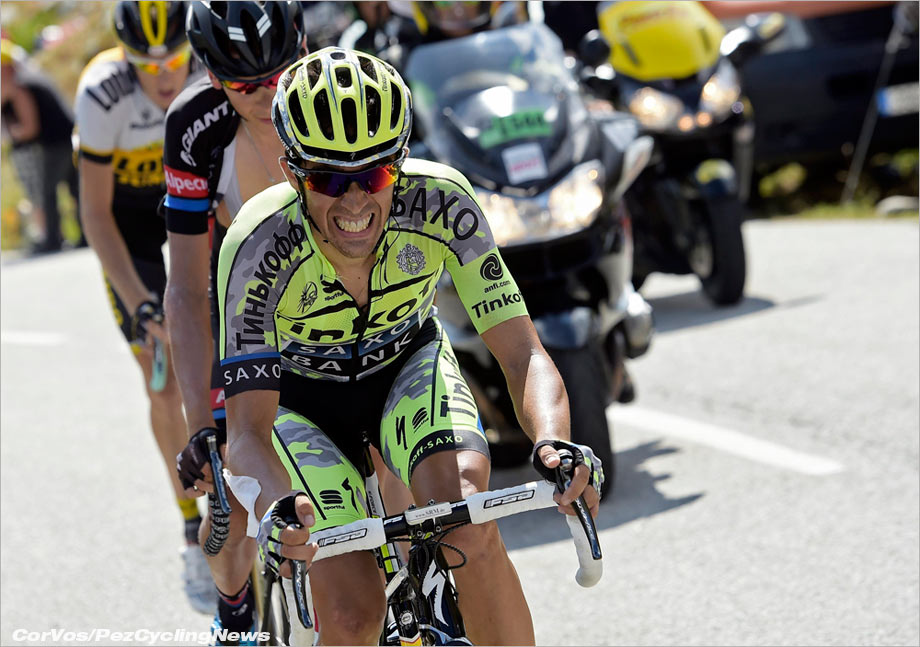 Quintana spoke ahead of the stage with some bullishness, saying that the terrain on Stage 18 was “suitable for a battle”, but he looked more like he’s waiting for Stage 19. I sense though that he’s already thinking about keeping a grip on 2nd, which might seem smart, but if you want to win you have to be prepared to lose.

With this in mind, should Valverde be doing more to put Froome in the pain cave and to help soften him up for Quintana to put in a cheeky move that might actually get him some time? If for example Valverde had attacked on the way into Saint-Jean-de-Maurienne and gone for broke, it would have meant Froome would have to chase. Sure, the next two days are likely to be the most suitable for a rider like Quintana but why not have a go and try to weaken the race leader the day before?
Valverde might be tired but who isn’t by now? Also, the way he rolled in at the end of Stage 18, calmly breathing on the sprint in, suggested he had enough in the tank to do a bit more.

Contador is having a crack here and there but he is a shadow of his former self at the moment. He was interviewed before the stage and said that his race was over and also that he feels that Froome will win, barring an accident. He didn’t look angry or feisty, but it has to be said, just plain old sad. There are times when I wonder how much these guys actually enjoy racing their bikes, because the very often do a good job of looking downright miserable. 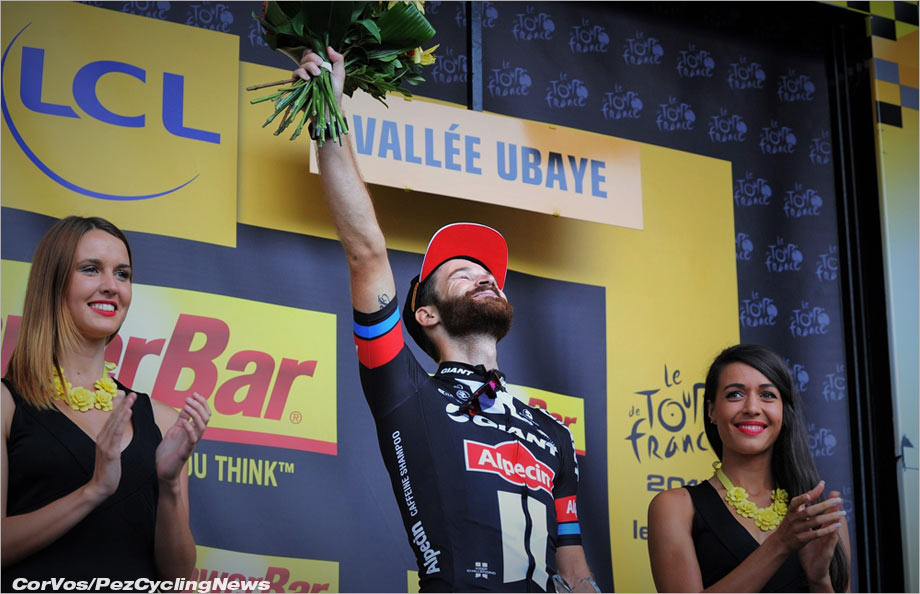 One man who was definitely very happy indeed was the winner of Stage 17, the hirsute Simon Geschke of Giant-Alpecin.
“It might take me two years to understand what I just did,” he said at the end of a day that saw him solo to a classic victory.
“I had to try something,” he continued. “I went into a break on the long climb and I had to take my chances to win. It was beautiful. When I had so much of an advantage, I knew there was a chance. It was incredible.

“This is my third victory as a professional, to be at the Tour is… I was waiting for 15 years for this moment.”

And with that, the tears came and for a moment, cycling fans, for the briefest moment I also choked back a tear. Here in this man’s moment of choking up was the glimmer of what this sport can be, or, perhaps, what it was to that 15 year old me, back when I thought this two-wheeled pursuit was the greatest, purest definition of sporting endeavor I had ever witnessed.

The welling up didn’t last long however, as someone sent me a quote from Michael Rasmussen, who was interviewed at the race just two days ago. 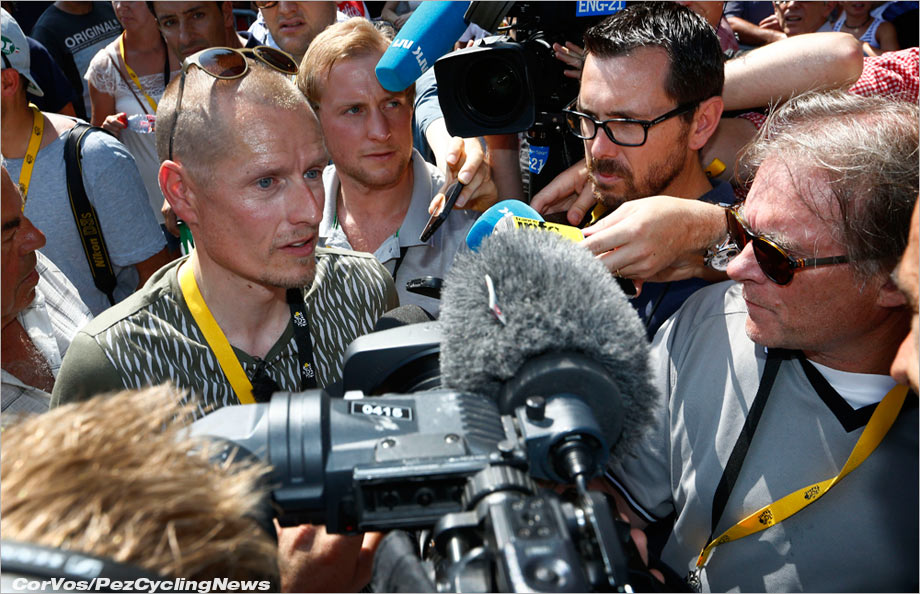 “I do not regret that I took doping if that’s what you’re asking,” Rasmussen said to the interviewer. “I think that was a condition in order to be competitive and battling for what I was battling for in those times. I was pursuing victory in the Tour de France since I was 8 years old. If I had to stop that pursuit, I would have stopped it ten years before.

“I did what I felt I needed to do in order to be competitive, to achieve the goals.”

And then you realize that the conditions that ‘forced’ poor Michael to dope have not exactly disappeared. The UCI still drags its feet over just about everything, the managers are all from a generation that doped, the sycophantic journalists still plod about the press area sending in empty copy and modern dope and doping methods are still ahead of the testers.

They tell us it’s getting better, but then they also tell us the battle for the GC is raging on. If there’s one thing I’ve leaned from professional cycling, it’s to question everything you hear… unless it’s Sean Kelly talking about Greg Lemond.

In the preview to Stage 17 Lemond hopped on his bike and descended the big climb of the day, almost wiping out on one corner. At the bottom he said he felt he couldn’t get up any real speed on the descent.

“That’s surprising,” said Kelly, “I’d have thought with all that weight that Greg Lemond would be quicker.”