Race Report Stage 13:  Team BMC’s Greg Van Avermaet took a welcomed win after a string of ‘almosts’ this season, exploding from the front of the pack as the day’s break was caught within 400m of the  line on a tough little climb into Rodez.  Peter Sagan chased the red rider to the end but could get no closer than a bike length. Maillot jaune Chris Froome filed another stage done on his quest for a second overall victory.

The GC big boys finished together in a tight group with no changes to overall as Chris Froome ticked off his seventh day in yellow and a very successful Pyrenean campaign to not only defend his lead but distance all challengers. 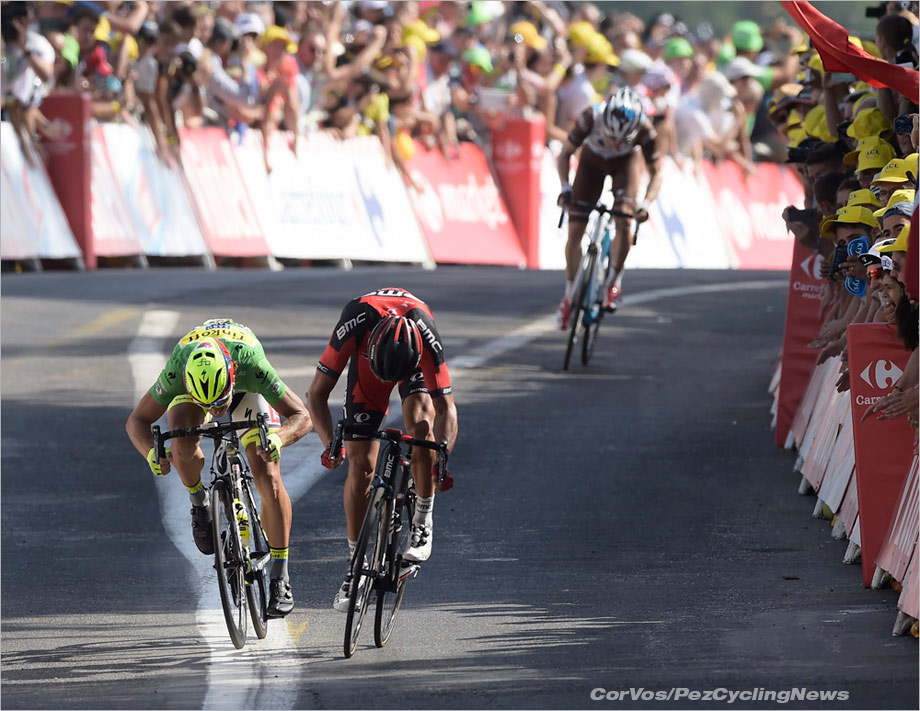 Stage 13 looked set in the stone for Peter Sagan to win atop the hill of the avenue de Saint-Pierre in Rodez. It was a spectacular finish but the Slovakian champion who hasn’t claimed a stage of the Tour de France since two years ago was second again as he lost the final sprint to Greg van Avermaet (BMC). The Belgian, third of the Tour of Flanders and Paris-Roubaix this year, is also known for often making the top three but seldom winning. He finally took a well deserved victory.

The lumpy ride out of the Pyrenees towards the even lumpier Massif Central looked on paper to be a day for surprise attacks, but in the end it was no changes to GC. 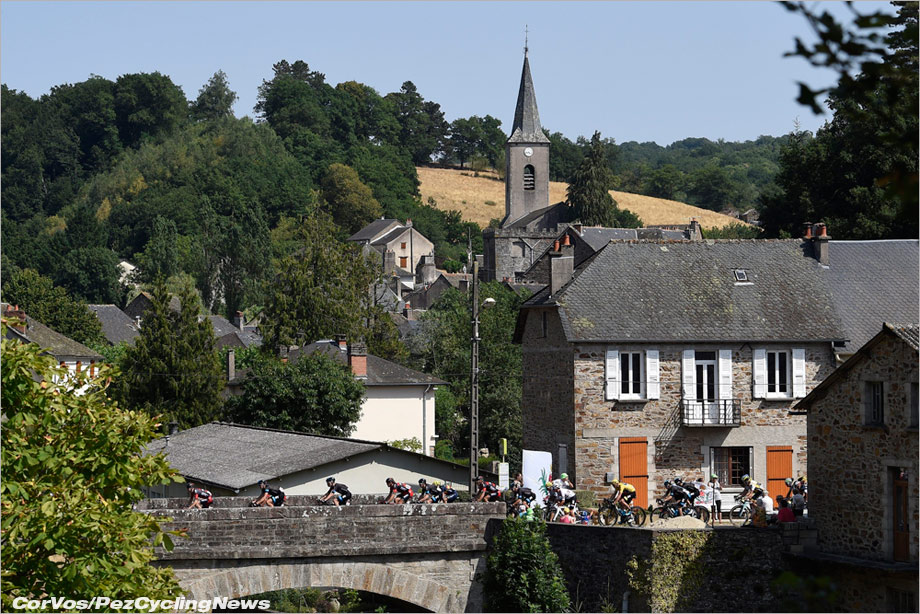 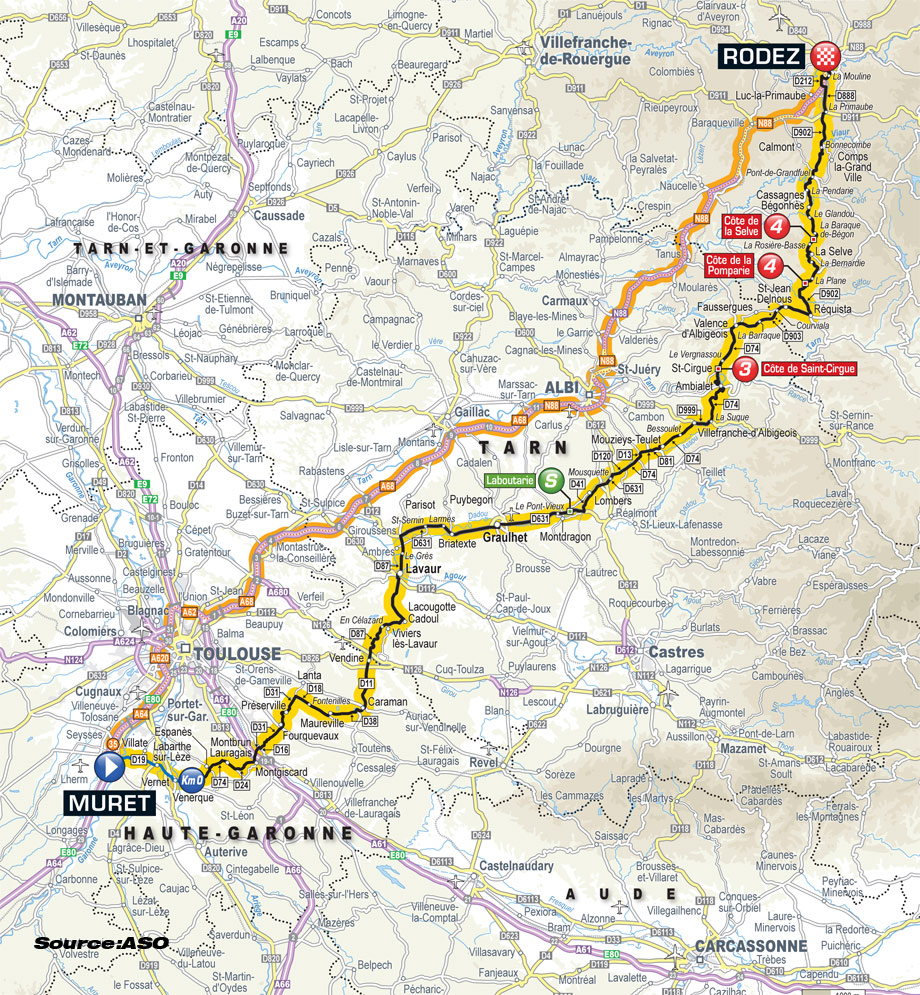 175 riders started stage 13 in Muret. Four of them rode away from the gun: Alexandre Geniez (FDJ), Thomas De Gendt (Lotto-Soudal), Cyril Gautier (Europcar) and Wilco Kelderman (LottoNL-Jumbo). They were rejoined at km 5 by Nathan Haas (Cannondale-Garmin) and Pierre-Luc Périchon (Bretagne-Séché Environnement). The members of the peloton didn’t even have to wait until the 10th kilometer before the Giant-Alpecin team took the command to prevent the time gap from increasing significantly. Firstly, they didn’t allow Perrig Quémeneur (Europcar) and Andriy Grivko (Astana) to bridge the gap to the six leaders. The maximum difference before the intermediate sprint at Laboutarié (km 92.5) was 3.40. The sprint of the peloton was won by André Greipel (Lotto-Soudal) who virtually moved back into the lead of the points classification.

Serious crash for Péraud
The advantage of Alexandre Geniez (FDJ), Thomas De Gendt (Lotto-Soudal), Cyril Gautier (Europcar), Wilco Kelderman (LottoNL-Jumbo), Nathan Haas (Cannondale-Garmin) and Pierre-Luc Périchon (Bretagne-Séché Environnement) went up to 4.45 with 84km to go. Giant-Alpecin set the pace of the bunch for 110km, after which Tinkoff-Saxo took over when they hit the hills in the remaining 70 kilometres. Crosswinds and tension in the bunch created some splits. Jean-Christophe Péraud (AG2R-La Mondiale) sustained a serious crash at km 137 but courageously restarted and made his way back to the peloton after 15km of chasing. 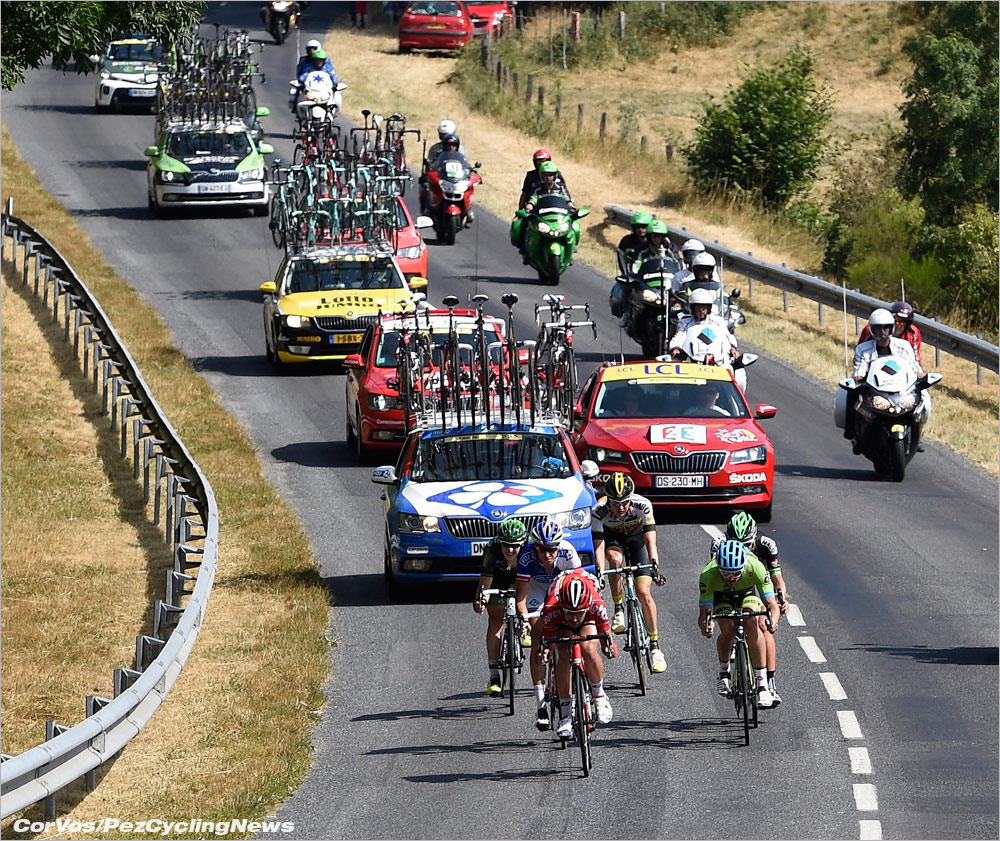 Kelderman, Gautier and De Gendt caught right at the end
As the bunch was led by Tinkoff-Saxo and occasionally MTN-Qhubeka and Orica-GreenEdge, Haas attacked with 24km to go. The double winner of the Japan Cup remained alone in the lead for six kilometers. Kelderman, Gautier and De Gendt made a leading trio 14km before the finish. They were caught with only 300 metres to go in the uphill finish. Peter Sagan (Tinkoff-Saxo) followed the right wheel when Greg van Avermaet (BMC) distanced the other sprinters, John Degenkolb and co, but in the last violent effort, the Belgian made the winning jump. Chris Froome (Sky), sixth on the line, retained the yellow jersey. 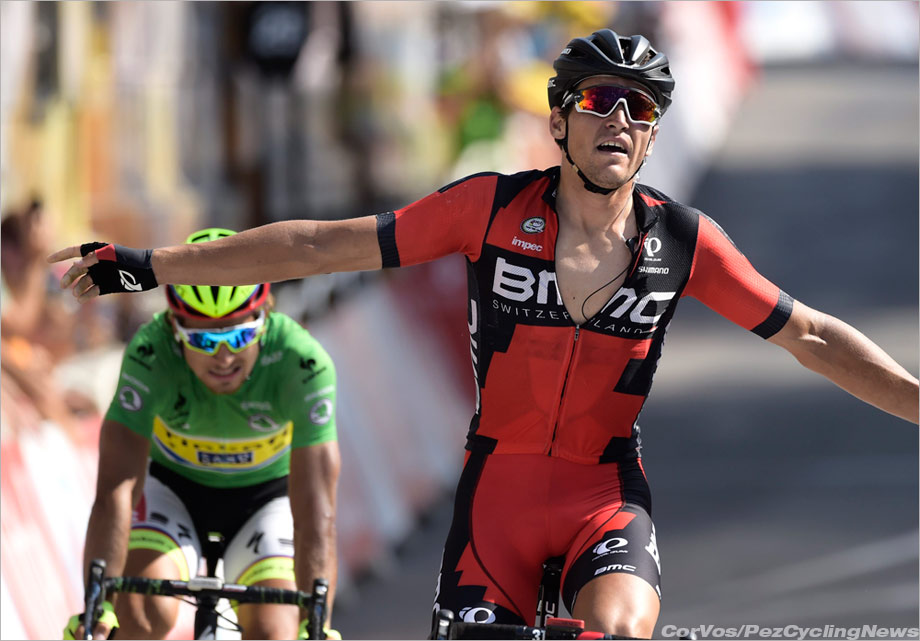