Roadside Report Stage 4: I wrote about anticipation on Saturday, that feeling when the race is about to start. Today is different: there are already so many scenarios at play, and so many people either out injured or compromised by time, that we know the stories being written. The Tour is alive and its coming to us on the cobbles, we just have to wait.

Last night’s arrival in Lustin was a fantastic surprise, as our room looked south over the Meuse river valley. There are some parts of the Ardennes that aren’t the prettiest, due to the legacy of the heavy industries, and heavy goods trains grumbled along the riverside far below us, forty cars long and more. Despite that, looking across to Profondeville was a view well worth the wait. 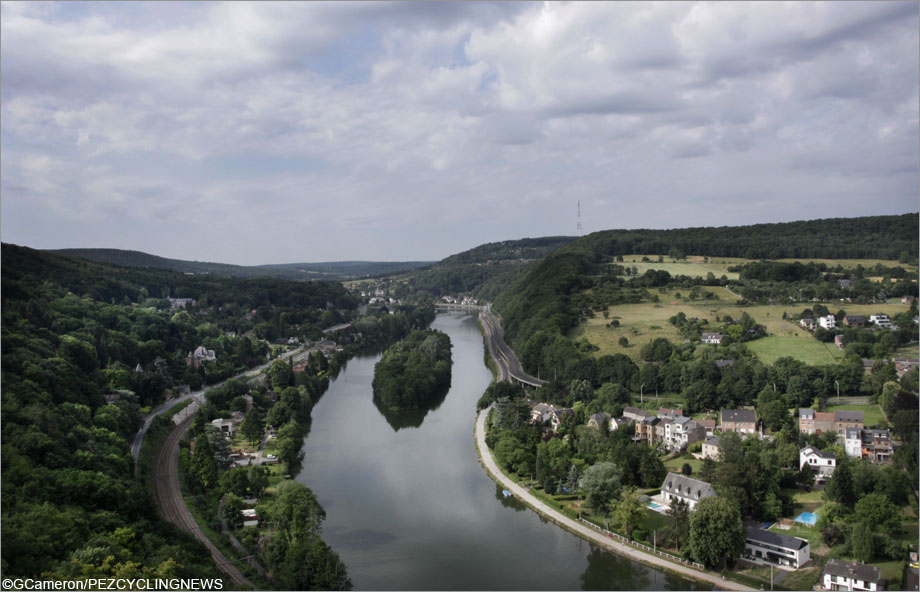 There was a lot of waiting today – it was that kind of stage. The route was a pretty straight south-westerly, making seeing the race more than once with such heavy Tour traffic too risky. We chose a one-stop strategy, heading for the first of the day’s cobbles at Pont-á-Celles, aiming to arrive early. 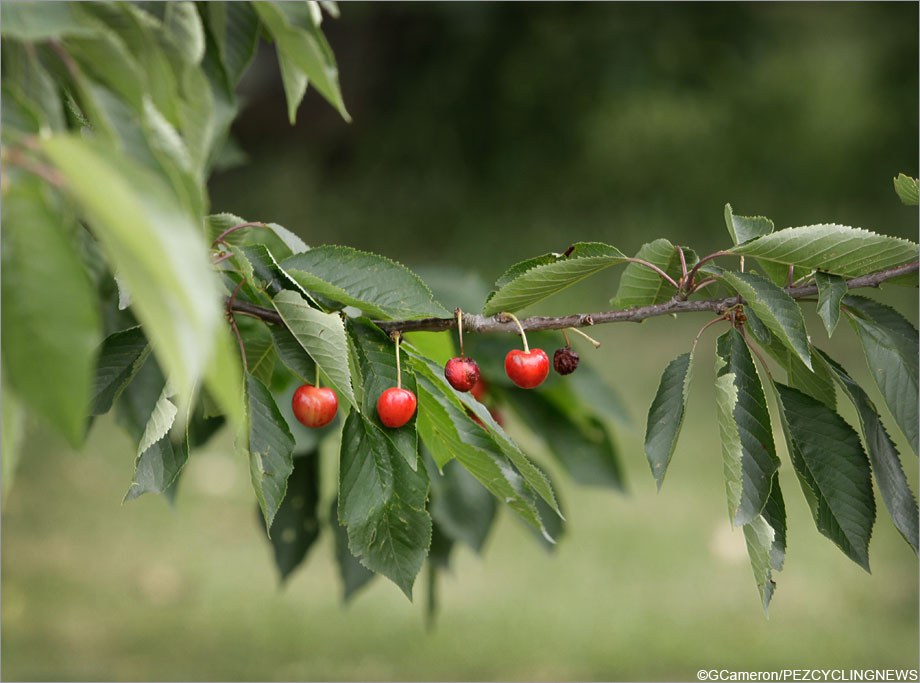 Pont-á-Celles is a small Wallonian village named for a monastery founded by the Belgian apostle Saint Amand, and ended up giving its name to what is now a municipality of 16,000 people. Jazz legend Django Reinhardt was born not far away in Liberchies. 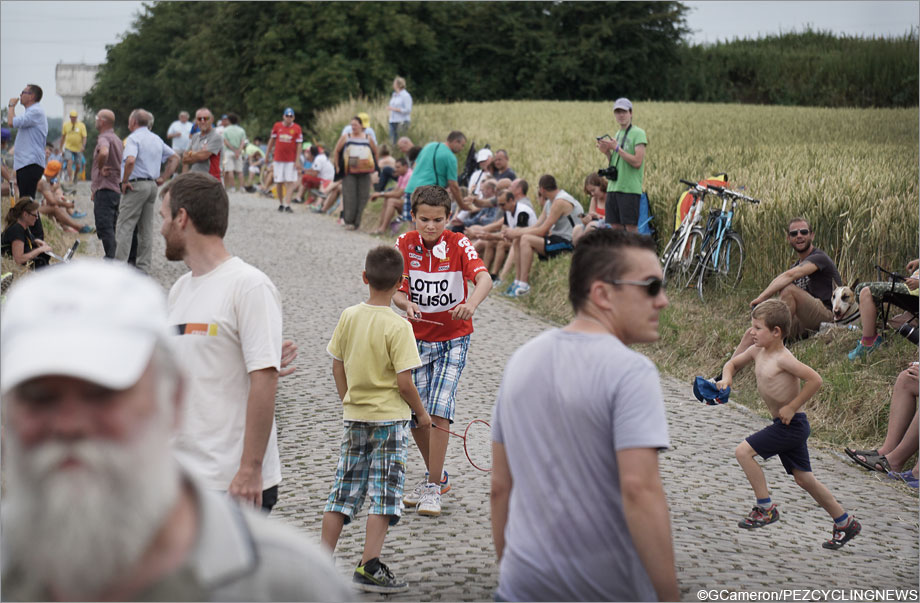 Even before the caravan had tooted its way into our consciousness the roads were closing up, but we managed to jam the hire car into a crevice by the roadside. The opening scenario for today’s battle was just a short five-minute walk away. 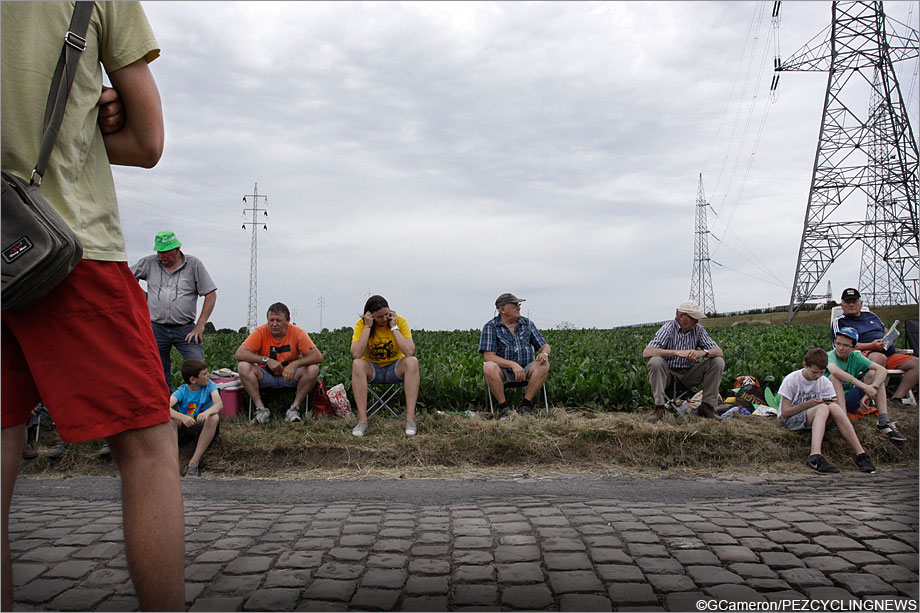 Check the gear: cameras, batteries, sun lotion, water (lots), food, patience and tolerance (loads). You need the last two in good supply, especially if you’re a parent trying to keep a family of kids organised, safe, entertained and engaged for a day that gets such a short pay-off at the end. It’s a bit like waiting for your favorite song to play on the radio all day, but it’s the Ramones blasting through ‘Judy is a punk’ in a minute-and-a-half. 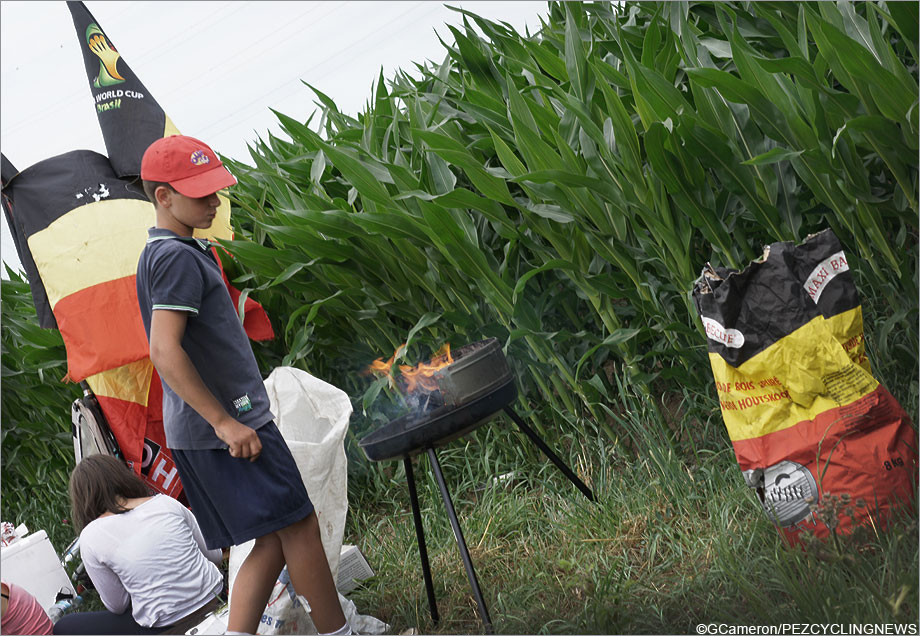 The Tour is a race where you can stand for three hours knowing that twelve seconds before the riders arrive an enormous man will decide your spot is obviously the best one, stand right in font of you, then look round once the riders have gone: “Good, wasn’t it?” Patience, tolerance. 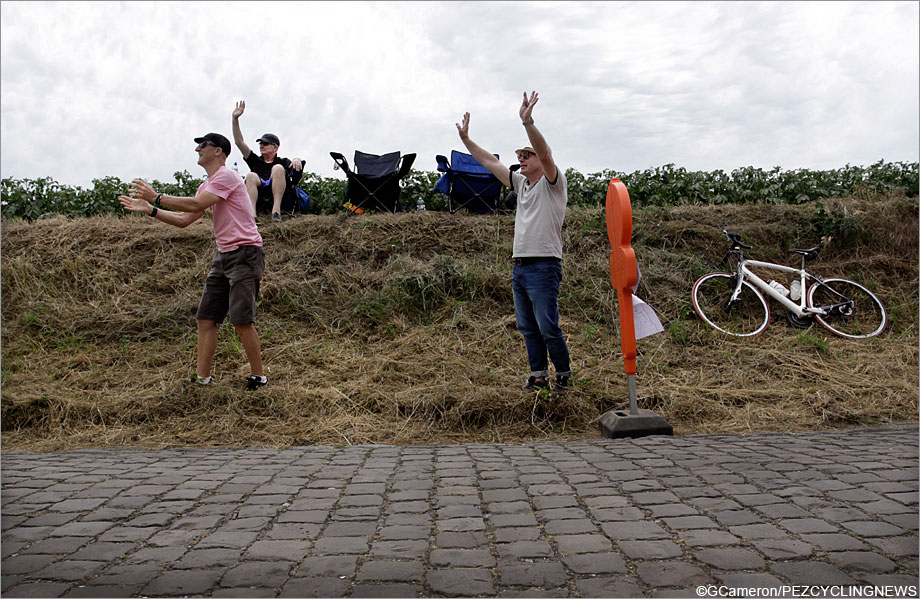 When the caravan arrives, there is the usual, embarrassment-free scramble where grown men would sacrifice their children for a shower cap or a fridge magnet. It’s not like a regular day; the Tour brings it out in people. If your life just won’t be complete without a cow keyring, then you know where to go! 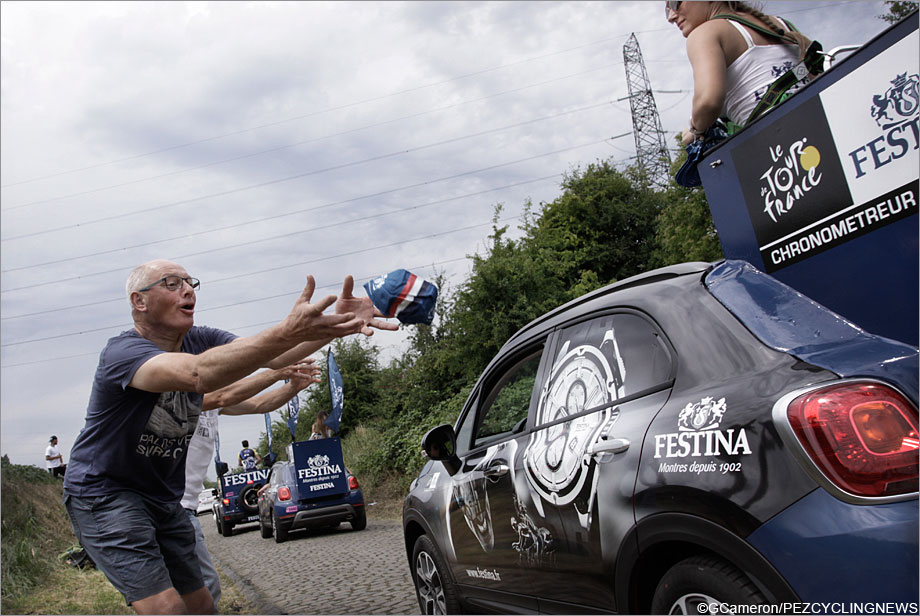 The kids are getting restless, but it pays to be prepared. There’s a young German couple next to me who eventually hop down onto the cobbles to waltz; two very old men with walking sticks stand on the road as the press and official vehicles come by, not even offering a suggestion of moving. 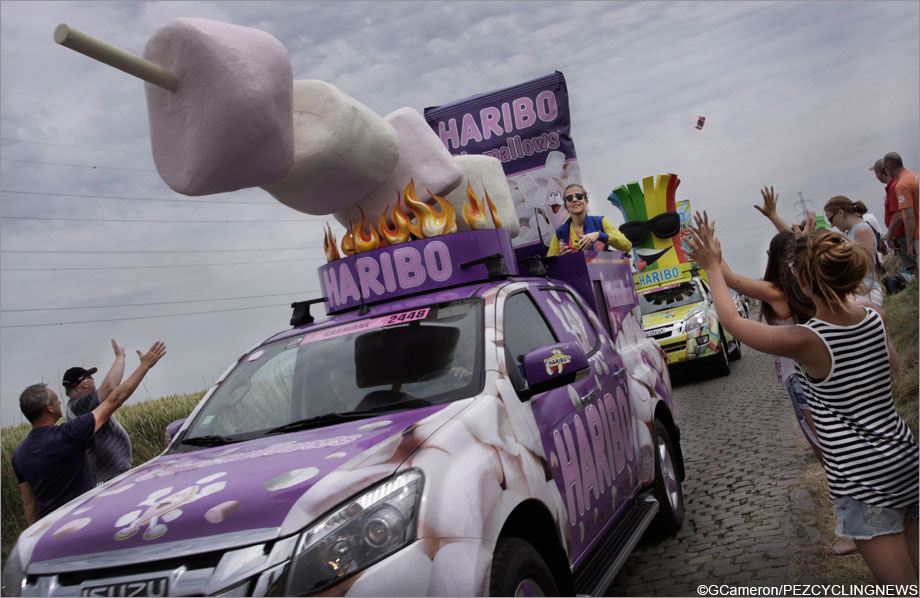 A family of parents + four kids are opposite me. The parents put on a curtailed display of public affection, which the kids stop dead in embarrassment.

In-depth discussions about the state of the modern bike world are going on all around, but it’s all about the wait. It’s the police helicopters that shudder overhead first of all, as the slate-grey sky threatens to unleash hell on the cobbles. 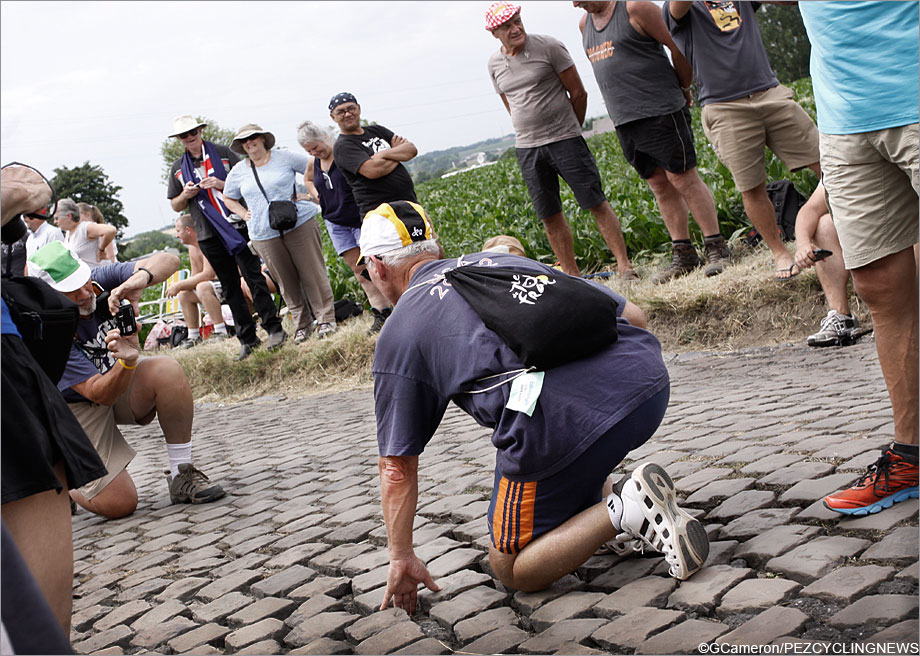 This sector of pavé is just over a mile, and it’s not quite a five-star nightmare that might hit the Paris-Rubaix peloton, but it’s bad enough. A little kid sticks his fist between the stones, and I notice plenty of shards of glass along the way, which I’m guessing get shaken loose from any refuse wagons picking glass for recycling. 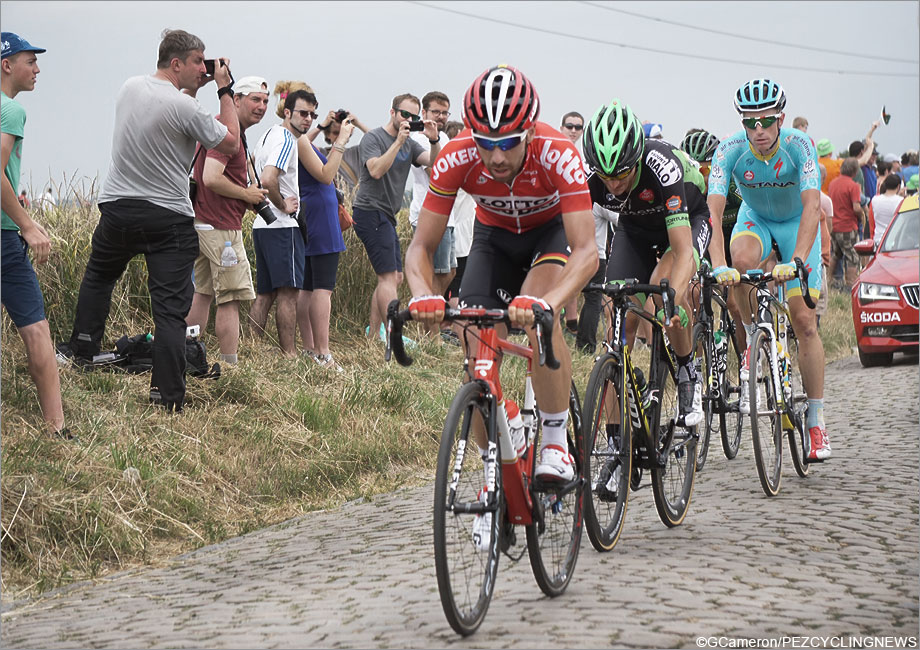 A quickening wave of press vehicles and photo motos roar through; the break is there with Thomas de Gendt leading Frédéric Brun (Bretagne-Séché Environnement), Astana’s Lieuwe Westra and Perrig Quémeneur from Europcar. 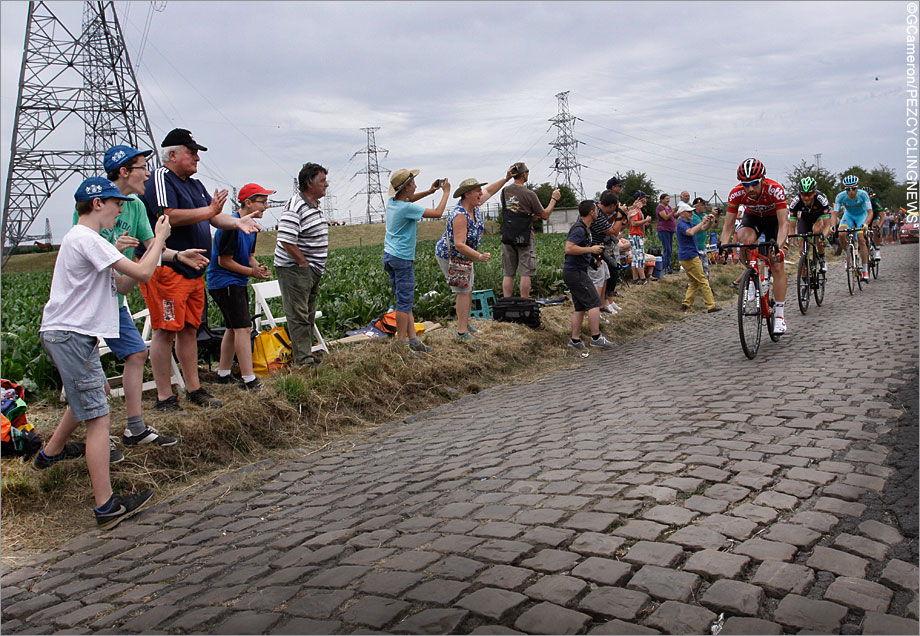 After pulling back from the first wave of excitement, the fans can’t hold back and start encroaching onto the road as soon as possible. 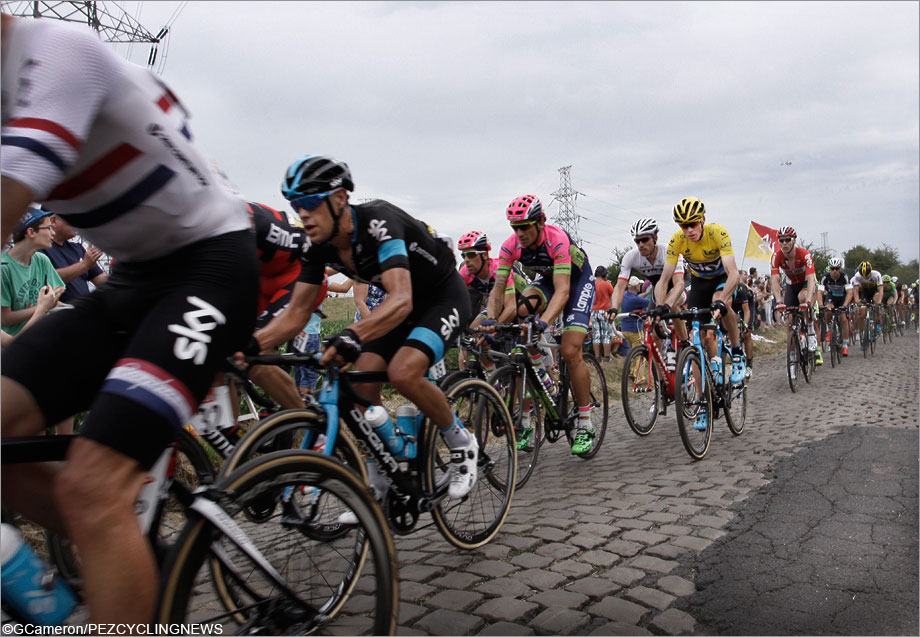 After all the standing, I don’t have enough time to think before the main field comes thundering by. Chris Froome clattering away like loose change in a washing machine; Alex Dowsett bodyguarding Nairo Quintana on the far side. BMC have a platoon of foot soldiers for their general Tejay van Garderen. 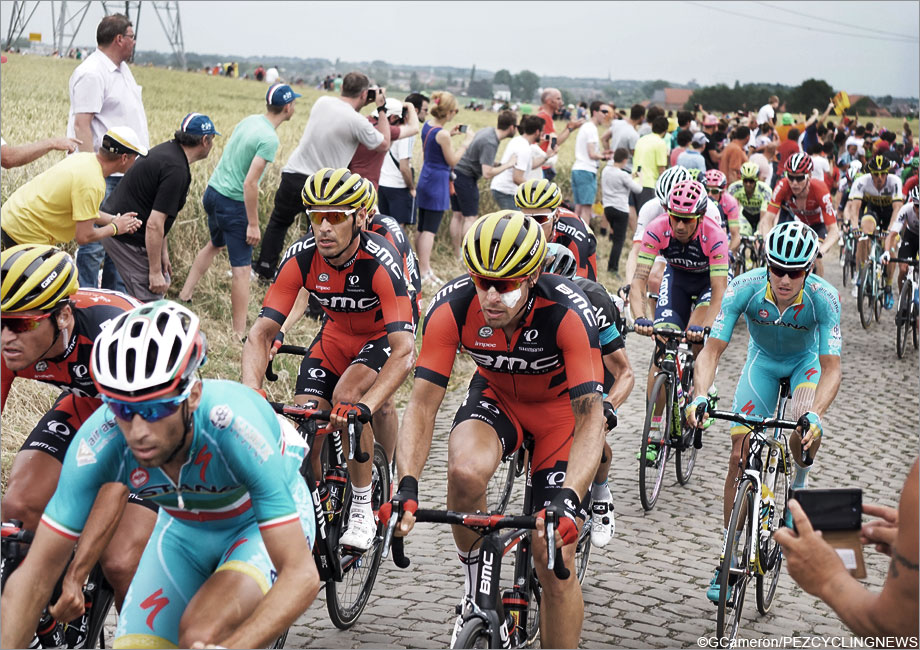 It’s incredible, terrifying, how close we are to the riders; it needs trust on all sides, as the Tour rockets past, and with miraculously few incidents. I can’t say for sure that no selfie sticks will be harmed by the riders though. 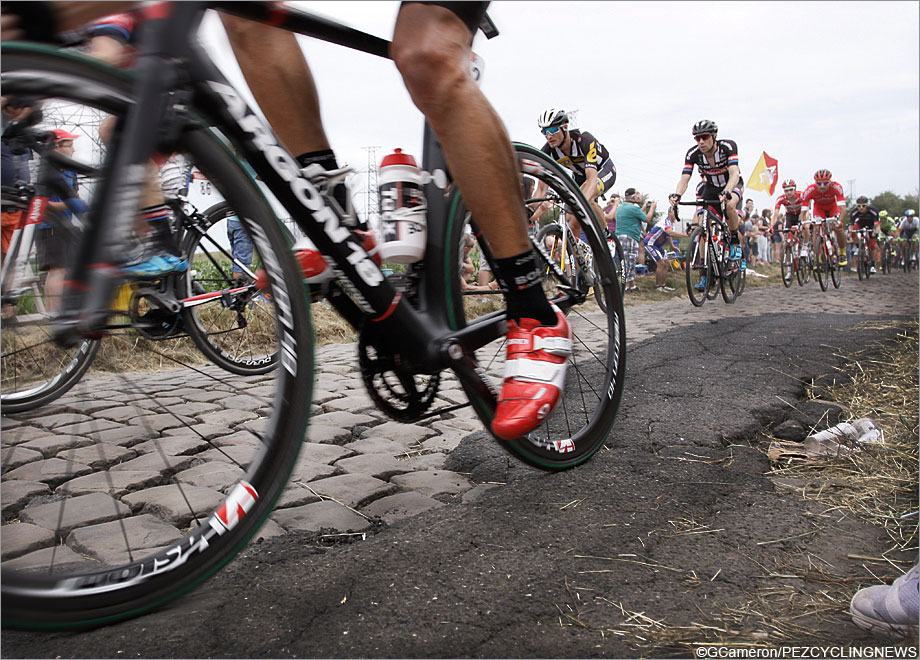 The field is more or less together, but there are a lot of grimaces; Michael Matthews comes by, mummified after yesterday’s crash. Last on stage three and, eventually, last on stage four, but he’s hanging in with such guts and determination that he deserves a more fitting nickname than ‘Bling’. 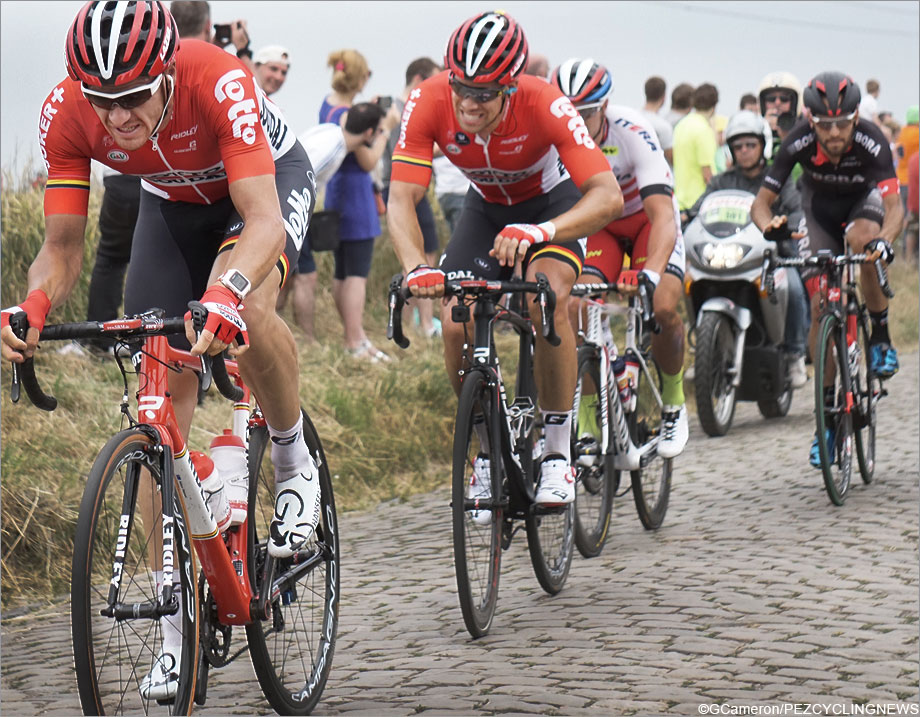 The agonised faces of men who know they still have six more cobbled sectors to survive before a rest are scrunched with effort; it’s a testament to the bravery of these guys that at least two of them rode through today having popped their dislocated shoulders back in to keep going. 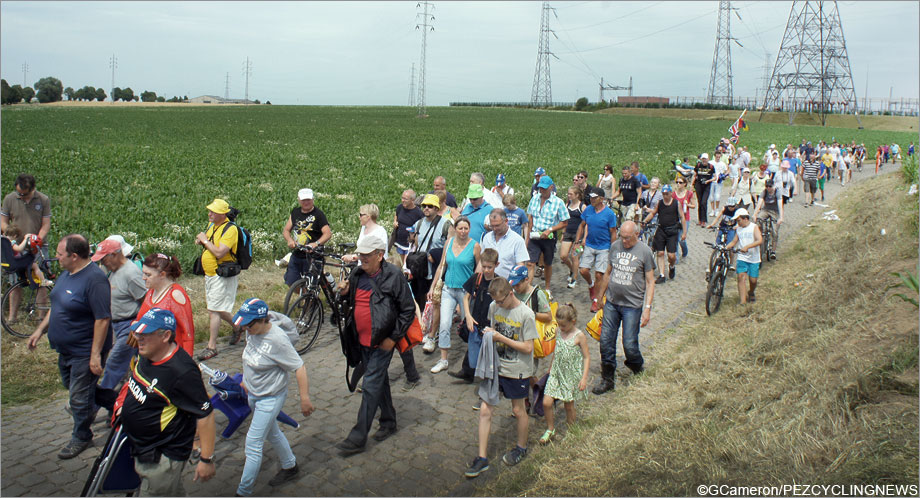 What passes for normality on Tour de France sets in quickly; temporary camps are packed away, cars and bikes retrieved from improbable positions and an unstoppable human tide pours away from Pont-á-Celles, carrying us in its wake.