Race Report: Alexis Vuillermoz of Ag2r climbs into French cycling’s elite as he dominates on the Mur-de-Bretagne to take the first win of the race for his team and for France.

France finally has a winner in the 2015 Tour de France as Alexis Vuillermoz (Ag2r) flies away from the peloton on the Mur-de-Bretagne. Behind him Dan Martin rode into 2nd to take another high placing on a hilltop finish in the race but he wasn’t able to take advantage of the pacemaking his team had done on the stage. It was a stalemate in the GC with the exception of Vincenzo Nibali who, surprisingly, lost 10 seconds to his main rivals on the final climb. 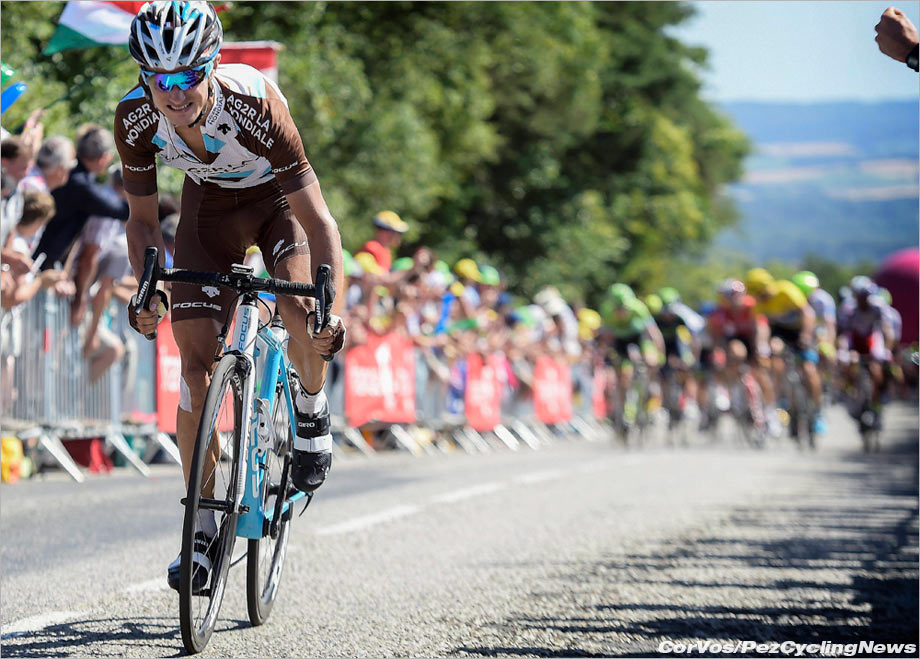 Route
We’re in Brittany, which means obsessive fans and relentless uncategorised climbs. Despite the continuos elevation changes throughout the race we only have two categorised climbs, the category 4 Col du Mont-Bel-Air in the Cotes-d’Armour region where 5 time winner and Tour legend Bernard Hinault was born and raised. The second and final categorised climb is the 3rd category Mur-de-Bretagne (2km @ 6.9%) where the stage will finish. We’ve been here once before, in 2011, when Cadel Evans beat Alberto Contador to the stage win, incidentally that means that 100% of the time the winner on this climb has won the Tour overall. It will be interesting to see if that stat holds up after today.

What’s left of the break breathes its last breaths on the Mur-de-Bretagne.

Looking for a Break
As has been a common theme of the Tour de France this year the break of the day went immediately after the flag had dropped. We had two pairs of breakaway riders today with Sylvain Chavanel (IAM Cycling) and Bartz Hurzarski (Bora-Argon 18) leading Romain Sicard (Europcar) and Pierre-Luc Perichon (Bretagne-Seche) 20 seconds down. The four riders joined together whilst behind them Thomas De Gendt (Lotto Soudal) was dispatched to keep the break in check for Tony Gallopin. 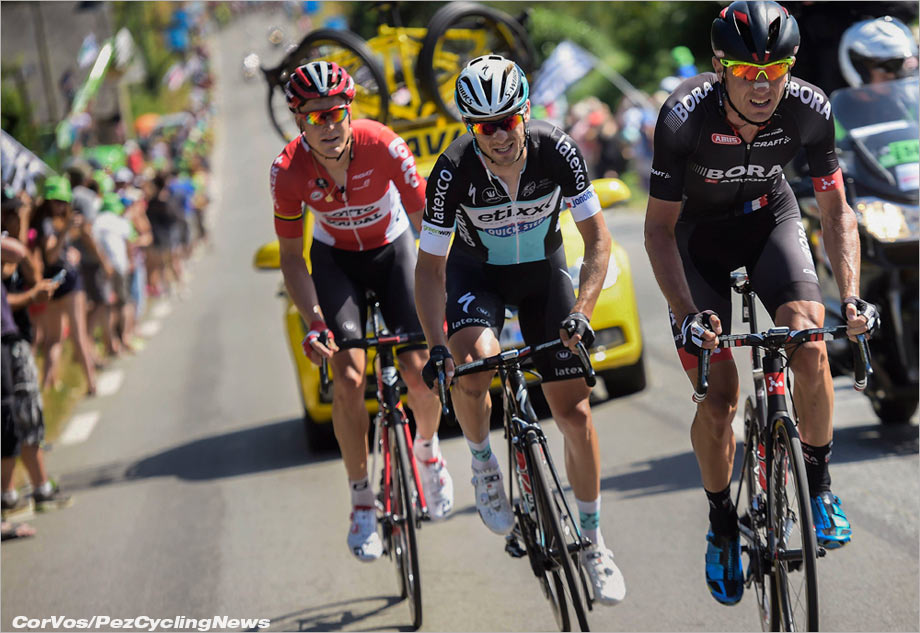 The primary ambition for the break was, of course, the stage win however Chavanel and Sicard were also racing for contracts in 2016. Chavanel has been informed that he is no longer required at IAM and at 36 the 3 time Tour stage winner is riding into the sunset of his career. Europcar have revealed that they will no longer be continuing their sponsorship into next year and so Sicard may well be riding for his future. The 2009 U23 World and Tour de l’Avenir champion has been disappointing in his senior career with 13th in the Vuelta last year his best result.
With 85km to go the peloton rode through the feedzone with Lotto-Soudal and specifically De Gendt still doing all the work, it was a lot of belief to put in their 27 year old French puncheur.

Mid Race Excitement
With 80km to go we had the 4th category climb of the Col du Mont-Bel-Air followed by the intermediate sprint in Gare du Montcountour. Sicard took the the climb without any competition from his breakaway companions and they headed almost immediately onto the intermediate sprint. It was an unusual intermediate sprint as it seemed to be situated at the summit of a climb harder than the categorised one we’d just crested. Pierre-Luc Perichon jumped away from the breakaway group with Hurzaski on his wheel but he easily beat the Pole to the line. Behind them Andre Greipel (Lotto-Soudal) extended his green jersey lead by beating Degenkolb (Team Giant-Alpecin) with Sagan (Tinkoff-Saxo) and Cavendish (Etixx-Quick Step) further behind. 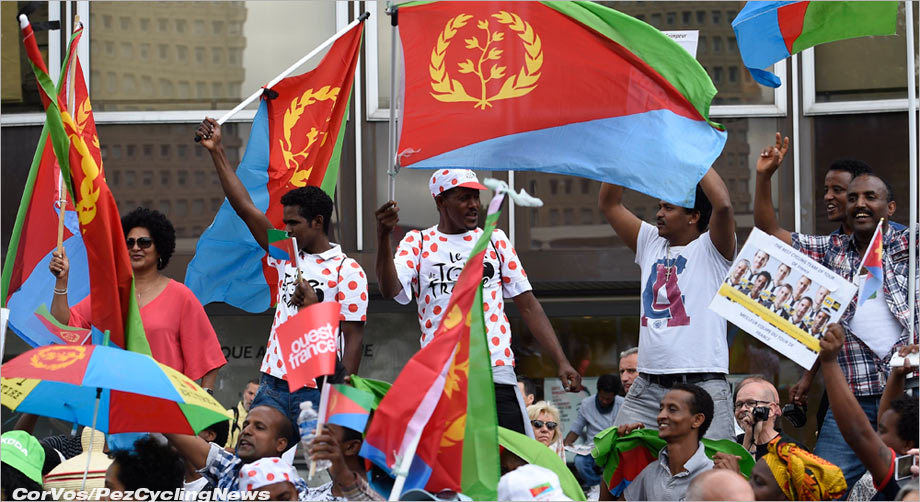 Another never before seen sight at the Tour – African fans cheering on Daniel Teklehaimanot prove that homies are homies no matter where you are in the world.

Usually the sprinters and their leadout men would sit up and wait to be absorbed back into the peloton however the presence of Pierre Rolland (Europcar) and Warren Barguil (Team Giant-Alpecin) was enough to convince them to push on. The group was 17 people big and with the sprinters unwilling to commit it was unworkable. Numerous splinter groups formed and once the action settled down we had a lead group of three; Lars Bak (Lotto-Soudal), Michael Golas (Etixx-Quick Step) and Hurzaski who had found his way back into the break. The peloton was now led by the lime green of Cannondale-Garmin who had managed to avoid the pace setting work earlier in the day. The gap was at a minute and the trio were refusing to be hauled back. As the stage reached the 20km to go mark the break began to come down. Slowly at first but as the Cannondale-Garmin effort was supplemented by the yellow jersey holders, Sky, it was clear that the trio would be caught quickly.

Despite the gap falling to less than 30 seconds the trio were still holding off the peloton as they entered the final 10k. Huzarski was the first rider to fall back, unsurprising given his earlier efforts, and he left Bak and Golas out with just 10 seconds of a lead. They were also on the final run to the Mur de Bretagne where the road rises and falls constantly to the foot of the climb. With 8k to go the remnants of the break were swallowed up by the peloton who were now led by BMC, the leaders of the team classification. The Cannondale-Garmin team and Sky had fallen back through the peloton as they let Van Garderen’s troops drive into the climb.

2kms before the climb and Tinkoff-Saxo and Orica-Greenedge took over the pace making, working for Contador and Simon Yates respectively. BMC who had done so much work earlier were now vanishing into the peloton with Van Garderen losing places.

Froome hit the climb on second wheel and soon he was leading the peloton. The pace had eased off though and Simon Yates took advantage and launched off the front. Froome was isolated and led the chase as they passed under the red kite. The sky man was exposed with Rodriguez on his wheel and Sagan behind him. Vuillermoz of Ag2r drove himself ahead as the gradient eased and he quickly built up a big lead. Dan Martin was the only man who could follow but he was never closer than the 6 seconds he lost at the finish. Valverde led the main group home for third place but there were surprises further down the hill as many people’s favourite for the day, Vincenzo Nibali (Astana) lost more time to Froome and Contador. The day belongs to Vuillermoz though who took advantage of the main GC men’s reluctance to attack into the headwind and took the first victory for France in this year’s Tour.