Roadside Stage 15: Sunday was a fast, fast stage, so Photog Beardy McBeard jumped ahead of the race to catch the action on the category 4 climb of the Col de la Croix de Bauzon. A fast dash of 100 kilometers to the finish for a wrong turn to throw the Beard off schedule. More unique pics from the Tour:

After our extra long commute I was really happy to be starting later as shooting 14 stages with one day off is starting to take its toll. We’d descended into the gorge to the hotel and I’d imagined how great it would be to ride. 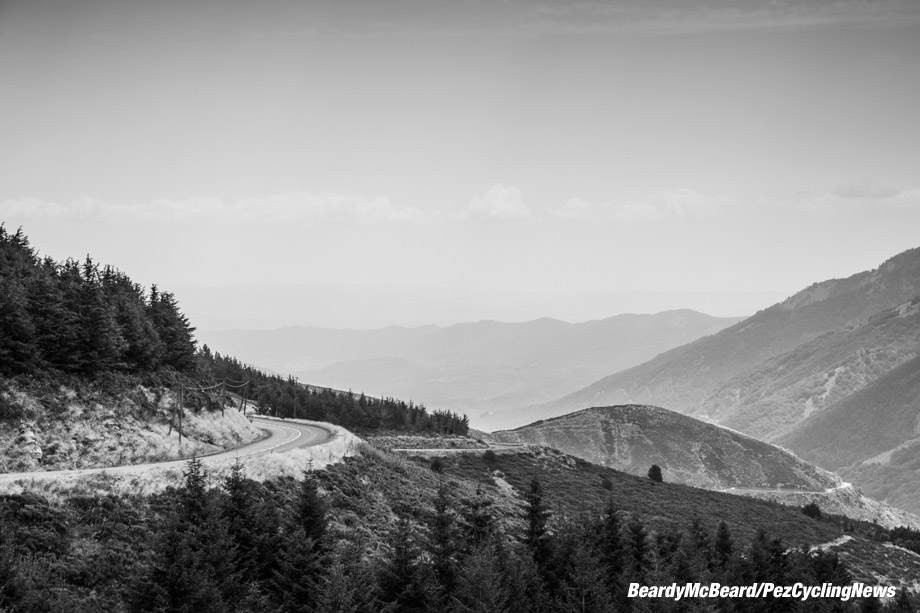 It was a 20km assent up out of the gorge to meet up with the course and saw lots of people riding up. I even managed to take a few non race photos. It was definitely a place I’d like to come back and ride. 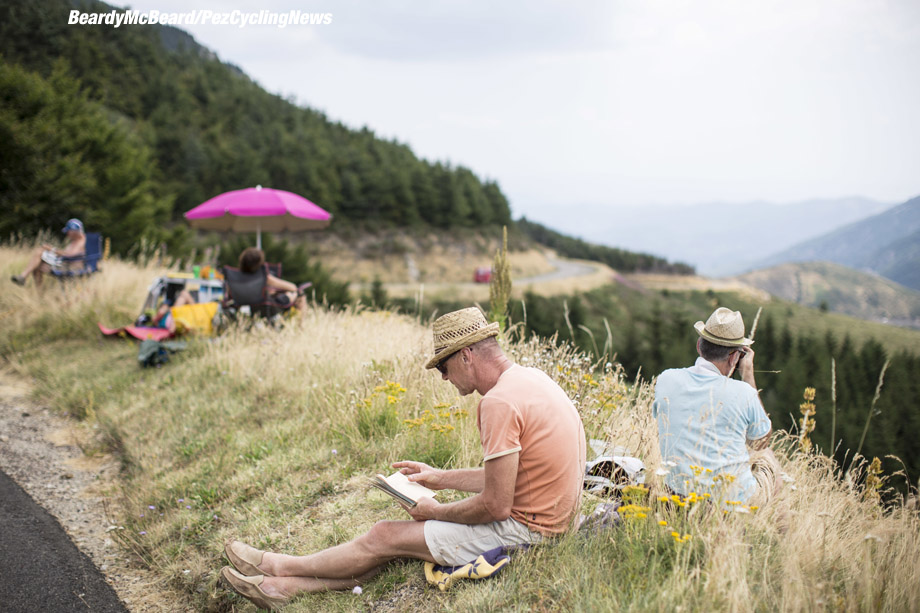 The last time I rode my bike was up Stelvio over 3 weeks ago. I am planning a ride on the rest day but I am feeling so exhausted I might have to actually rest. As I ride most days in my ‘normal life’ it is probably one aspect of tour chasing that has taken some time to adjust to. 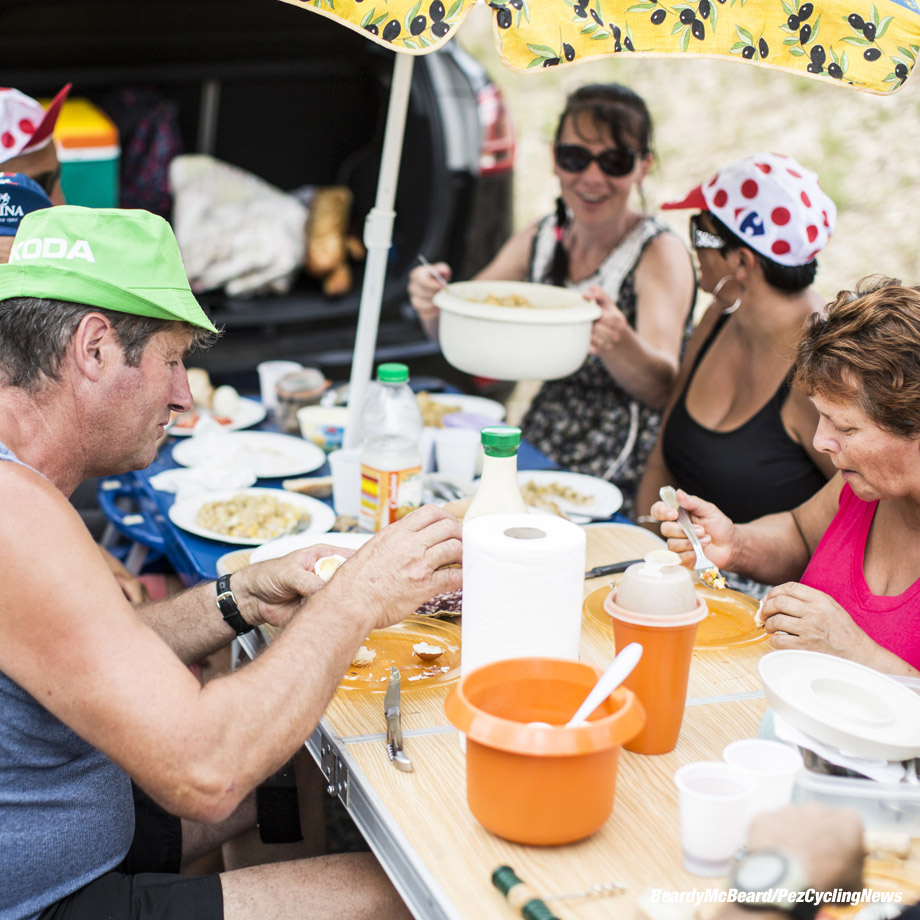 Days now consist of hours in the car averaging 250kms. Driving along amazing roads, interesting towns and natural wonders but not being stop, ride and take it all in. I’m going to feel very guilty going to Alpe du’Huez and not riding it. I might try a sneaky one the evening before…we’ll see. 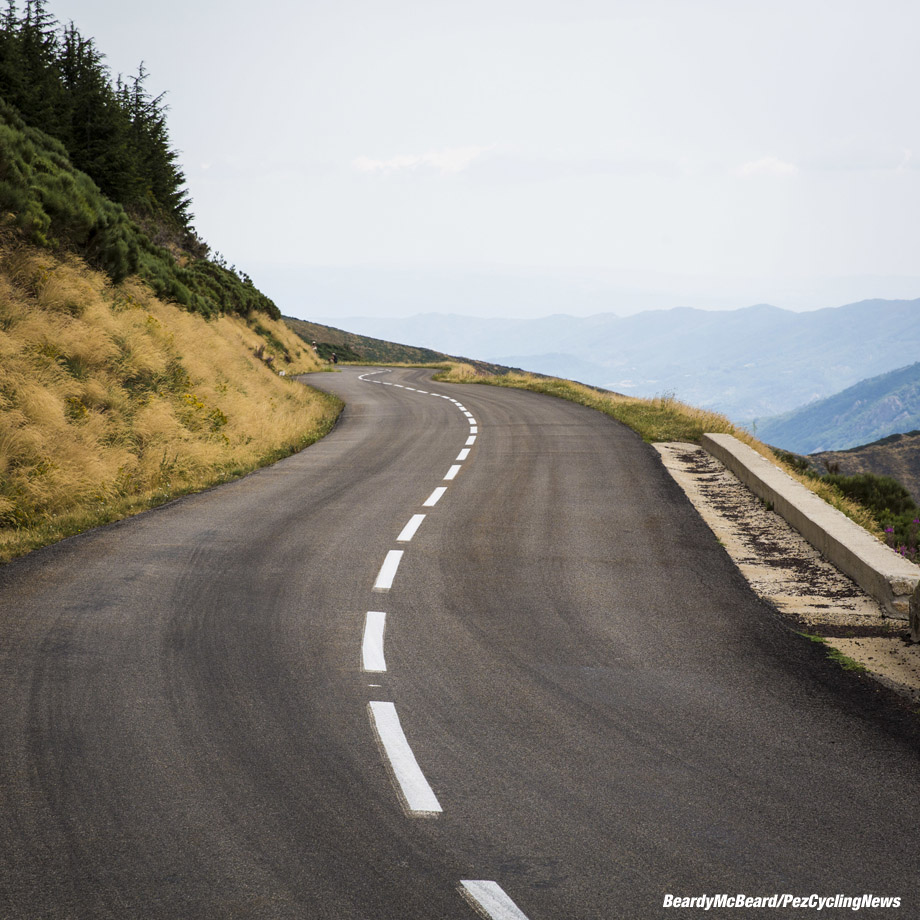 We joined up with the course just below the 3rd climb of the day with about 2.5 hours to kill. It was a category 4 called the Col de la Croix de Bauzon, but it wasn’t the summit we wanted it was the awesome, twisting descent. Complete with hairpins, sweeping bends and views of the road beneath and the expansive valley. 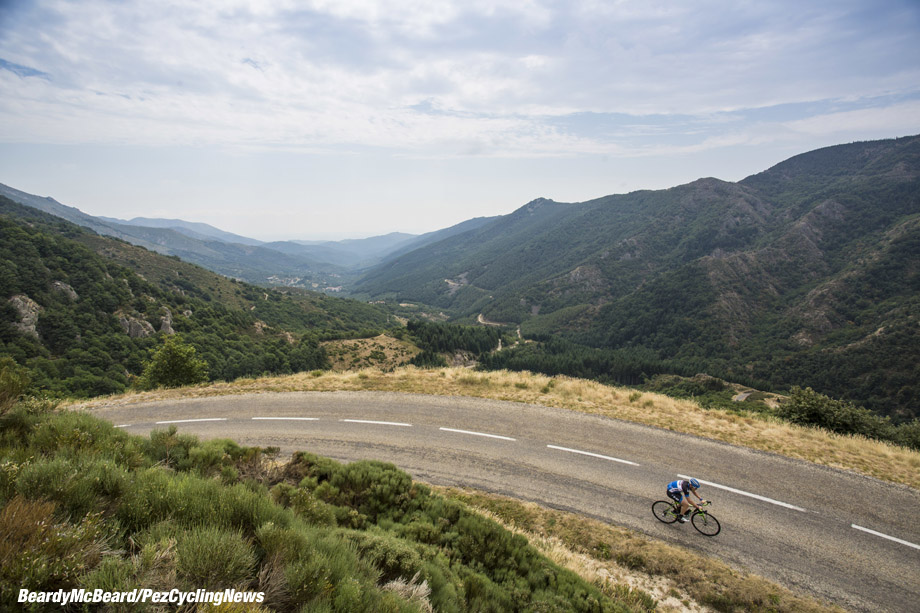 We pulled up quickly at the first place with a good outlook. We’d stopped in front of an older couple sitting on their outdoor chairs. They looked a bit worried that we might be going to stay and block their well thought out position to watch the riders. I reassured them it was just for a minute. 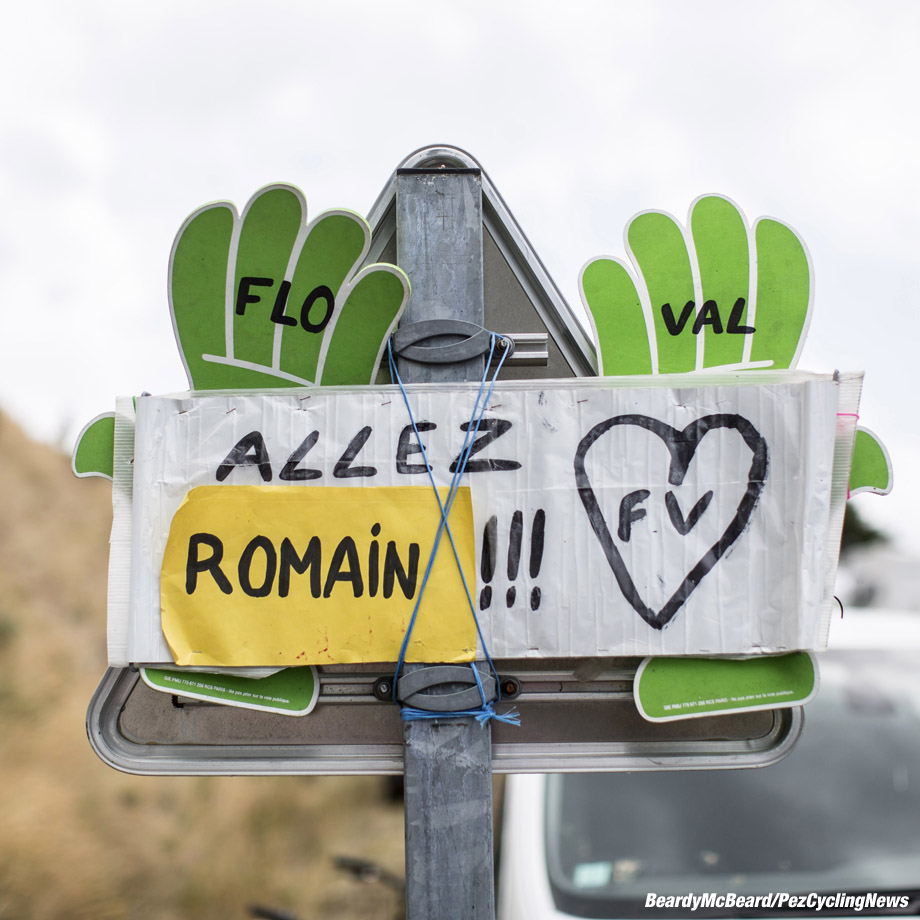 The last thing we wanted to do, especially as we the luxury of so much time, was to rush down the descent only to realise we’d gone way past the best spots. Remember the golden rule – Absolutely no going backwards on the course, not even for a little bit. 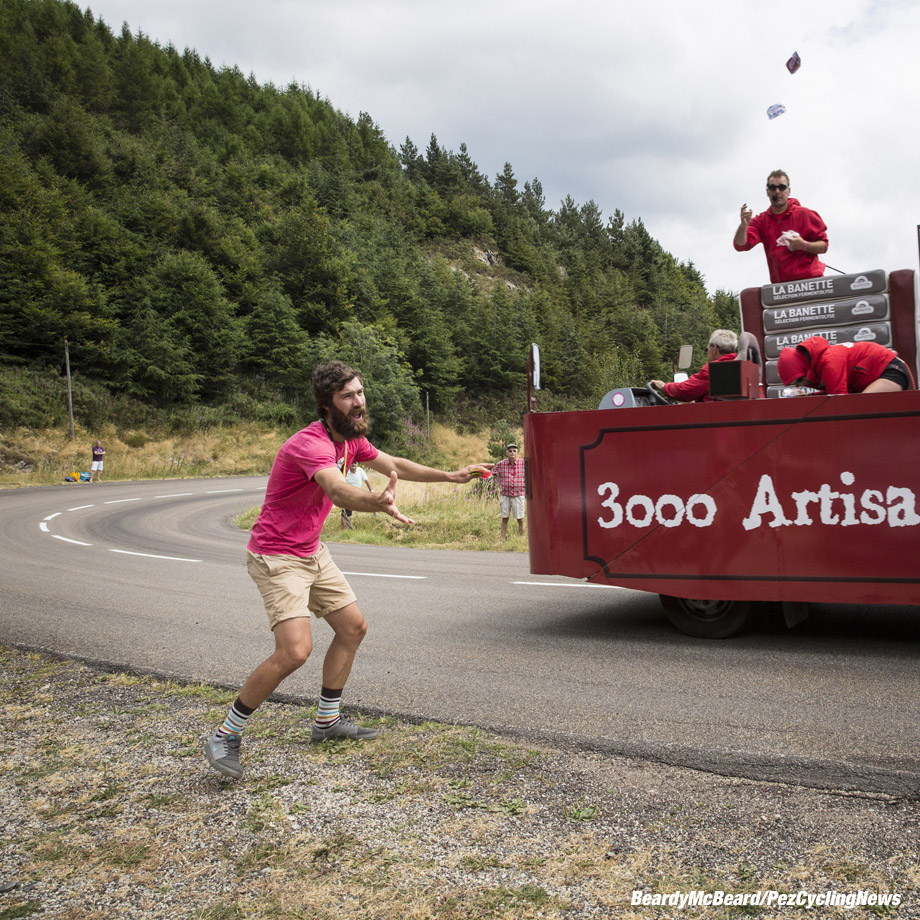 When that spot wasn’t quite right we slowly went a bit further and parked again. I walked for about a kilometre down scoping spots then walked back up just in time for the publicity caravan. I leaped around catching a few things but I was mainly after the edible stuff, mini salamis, lollies and baked madeleines. 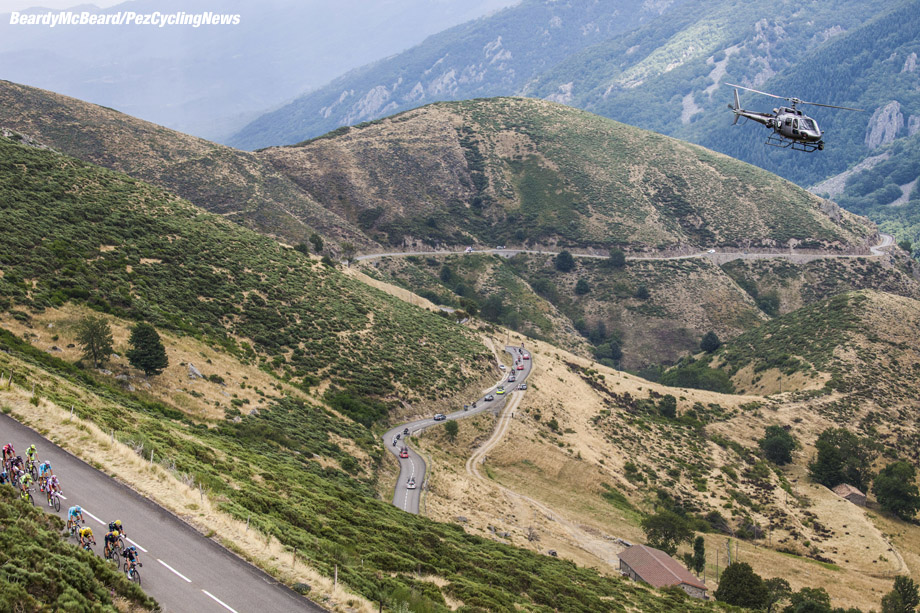 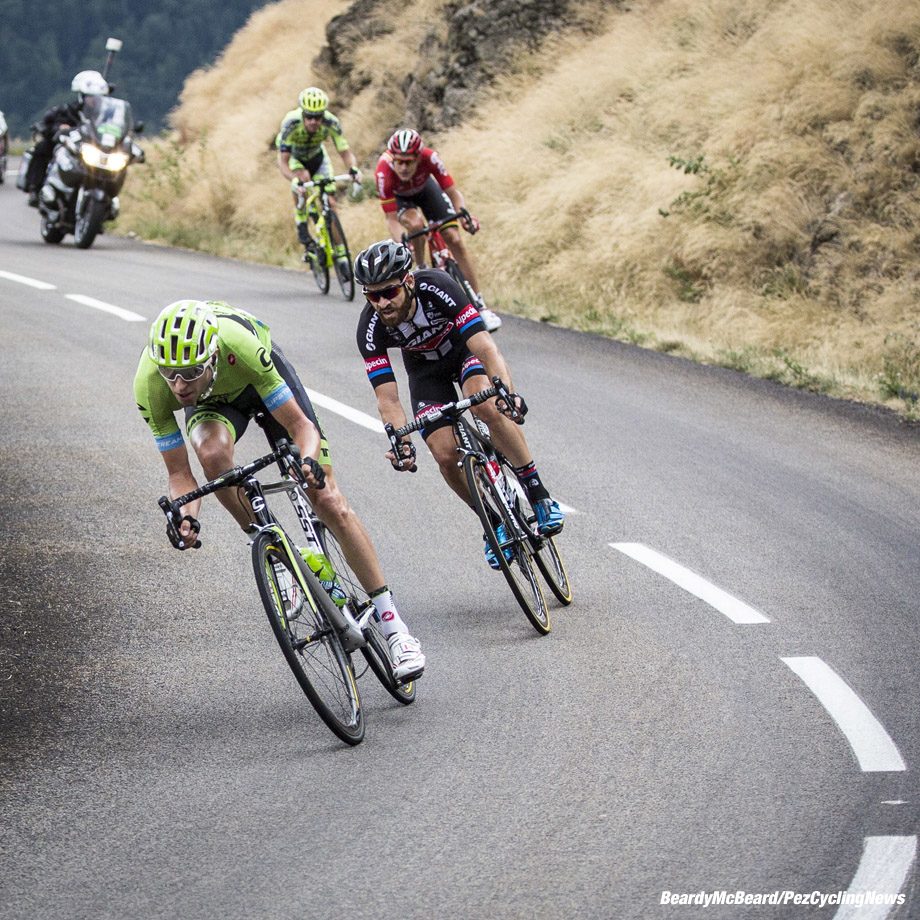 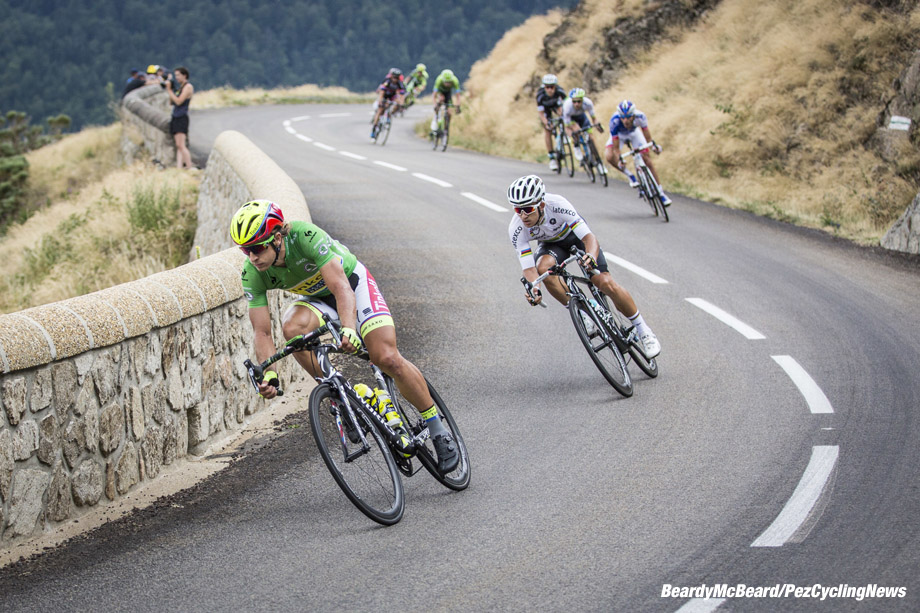 After they’d all driven passed, we drove down a bit further to the spot I’d walked to. I could hear a helicopter and all the photo-moto guys were starting to come past – a sure sign they are close. But because I couldn’t get any internet I didnt know what was happening in the race. Was there a break-away? This vital information would help me decide on my shots. Luckily at that point I heard an Aussie accent from the road below that an Aussie was in the breakaway. 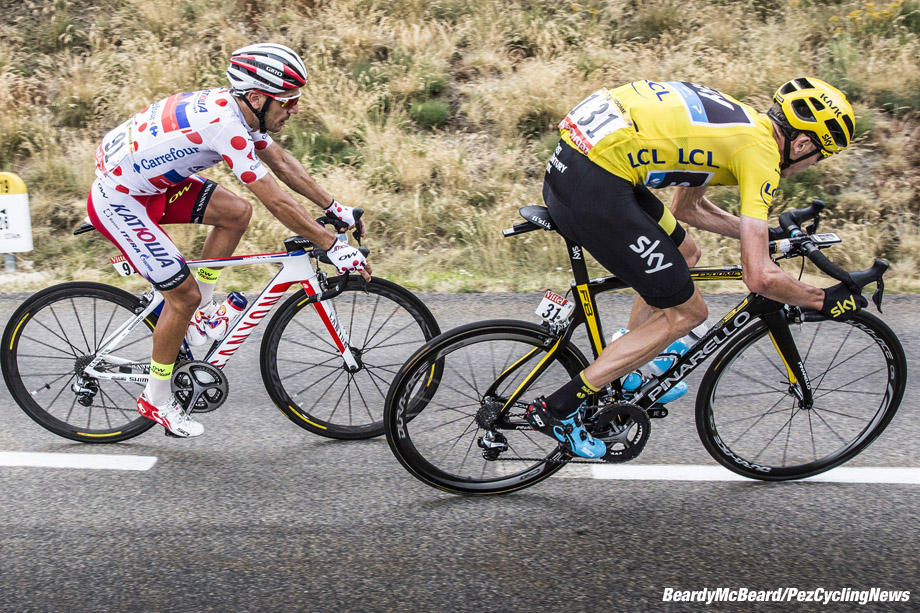 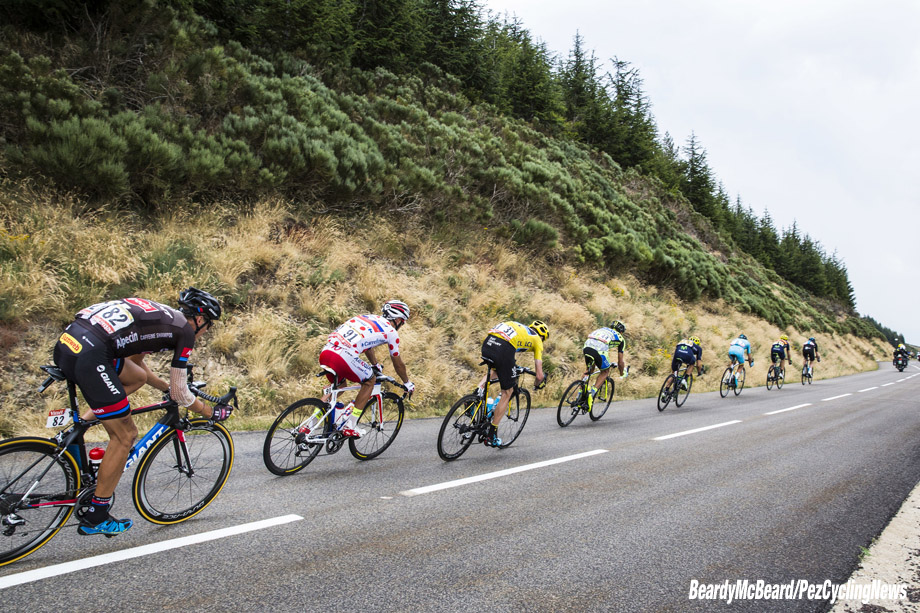 There was just a few minutes between the leading group and the main bunch. The road even allowed a shot with them both in the frame. 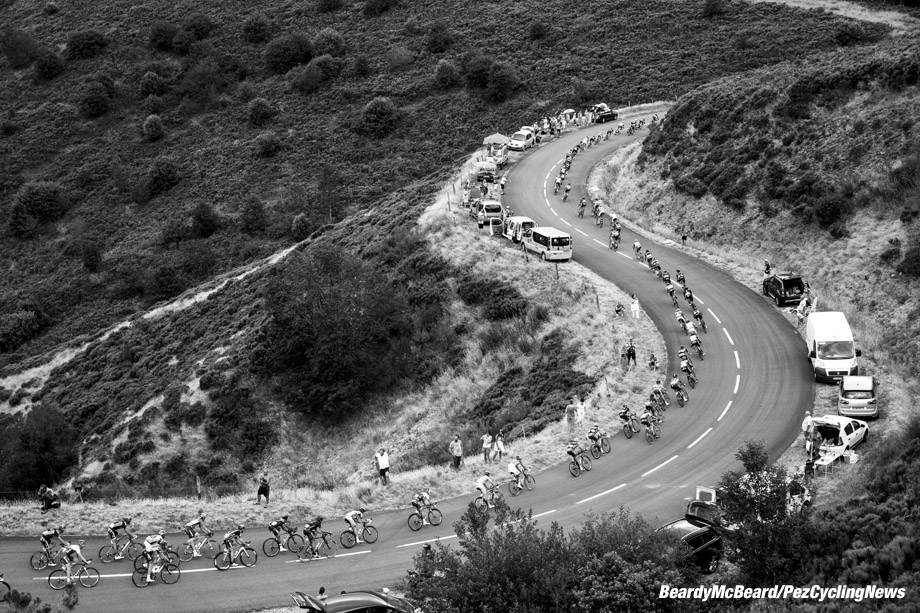 After they’d come through we ran back to the car and sped off as it was going to be another very close call. We’d just got a few hundred metres down the road when a speeding ‘course information’ car with flashing lights said to pull over as there were more riders coming. We later found out this was the Cavendish group 7 minutes behind the main bunch. 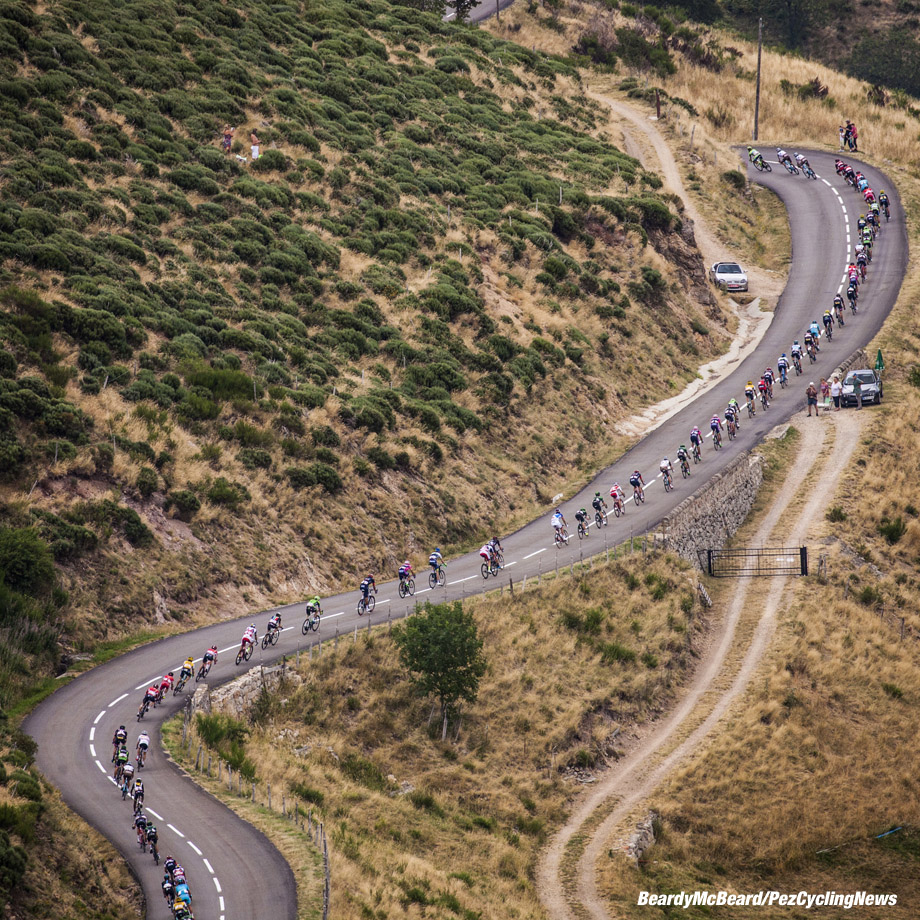 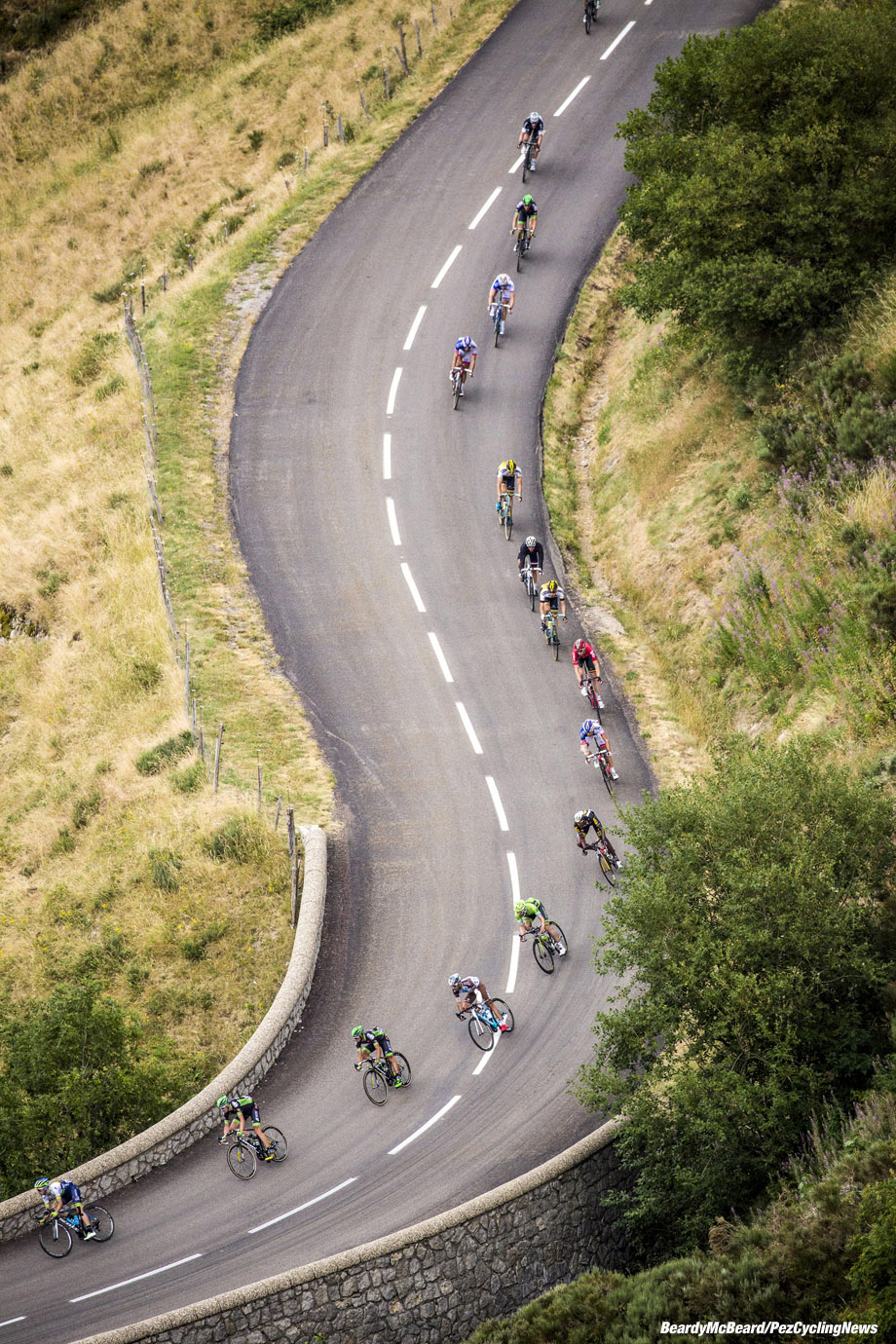 Once it was clear to go again we sped off for the finish. It was over 100kms and we were making good time on the closed roads. Stress levels rose at a crowded toll exit just near the finish town but we got through ok then at the main roundabout going into and out of the town we somehow took the wrong exit and drove away from the finish. Once we relalised our mistake we drove back but the off route entry had been closed. 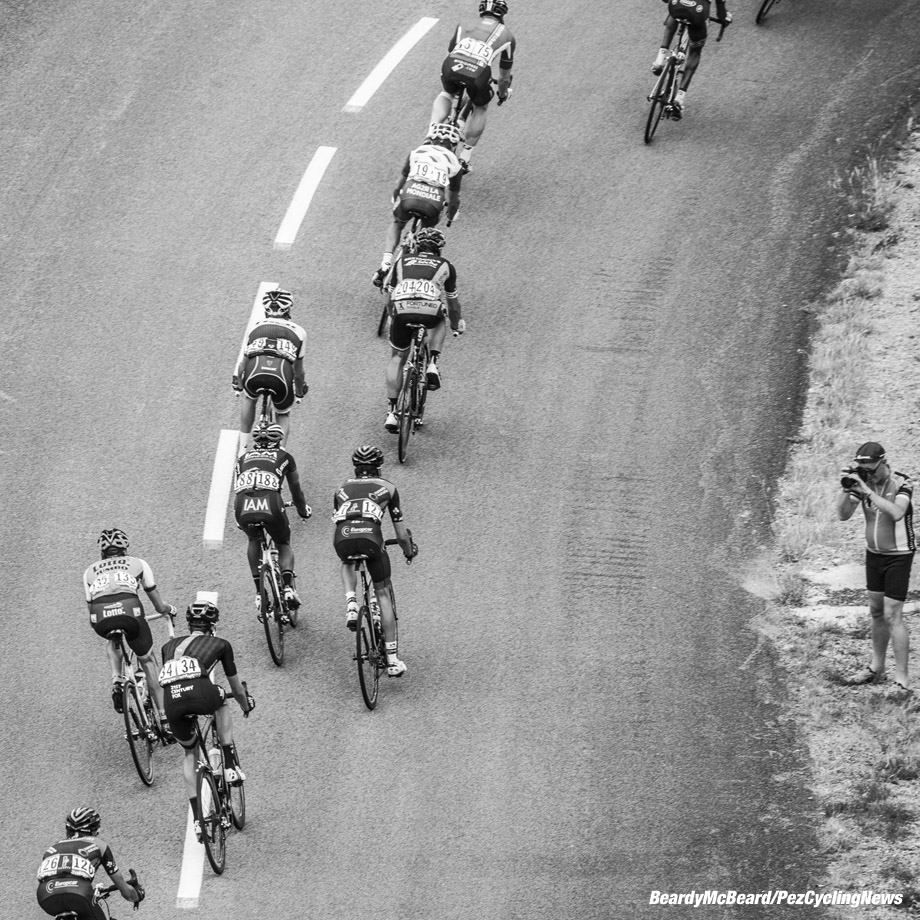 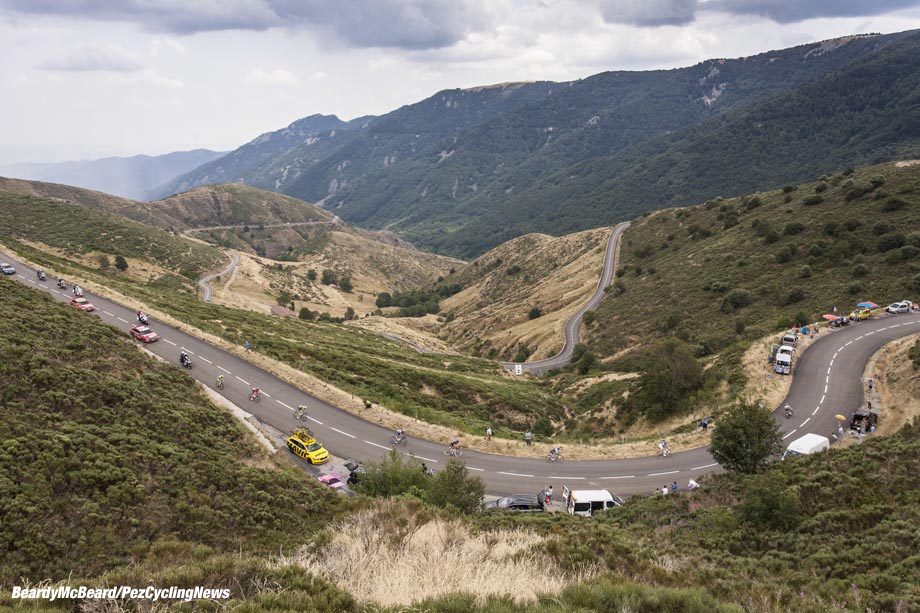 We’d raced all that way and missed the finish because of a wrong turn (it wasn’t helped by the fact that the riders rode very fast today, a blistering 46km average. We sat in the car wondering what to do. We decided to just head to the next hotel and view it as an early mark. 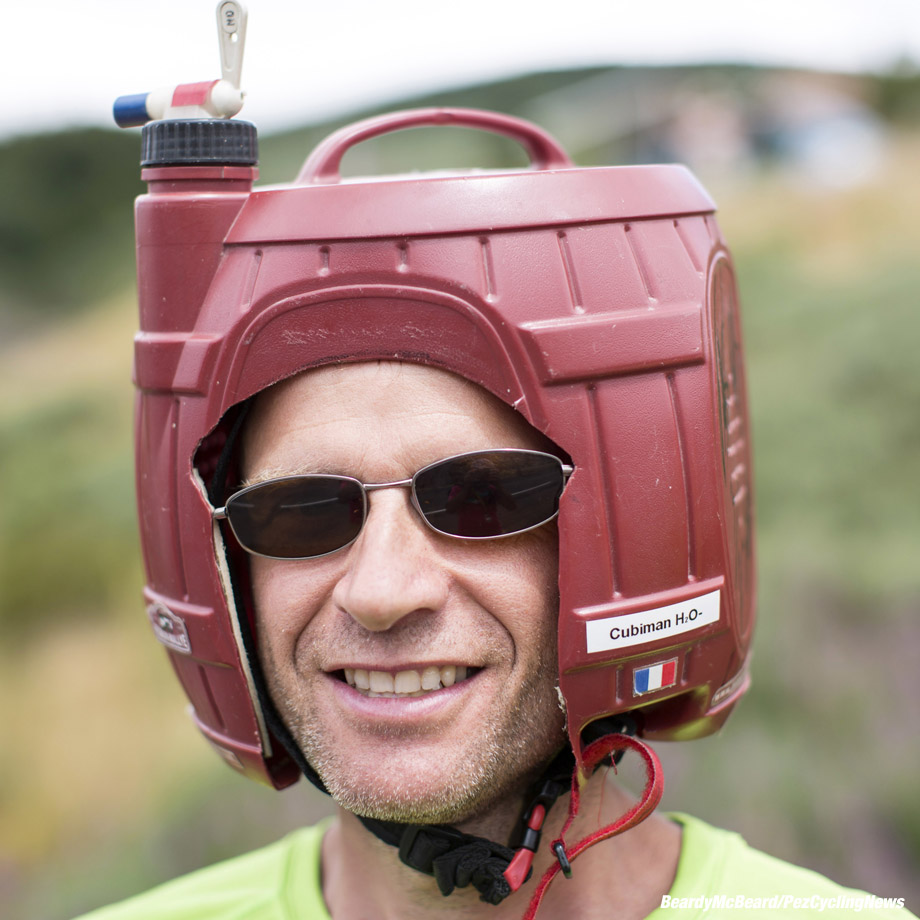 CLUB RIDE Contest: The WINNER IS!