Race Report: What a twist in the tail! After working like ten men but being pipped on the line yesterday, Tinkoff’s world champion Peter Sagan took no chances today. The Slovak star blasted clear in a late echappe royale alongside yellow jersey Chris Froome, Geraint Thomas and Maciej Bodnar, and ripped to a fantastic stage win.

Sagan said in his post-race interview: “It wasn’t planning… it just happened.” The thing is, you’ve got to be there to take advantage when it does happen. And too many others weren’t on the same page.

Caught napping…? Everyone else, unable to respond to the sheer speed and daring of a last 12-kilometer attack, with the sprinters’ teams and the other overall contenders frantically scrambling to limit the damage Sagan and Froome were inflicting. It was a 47.24km/h average speed on a thunder ride from Carcassonne to Montpellier. 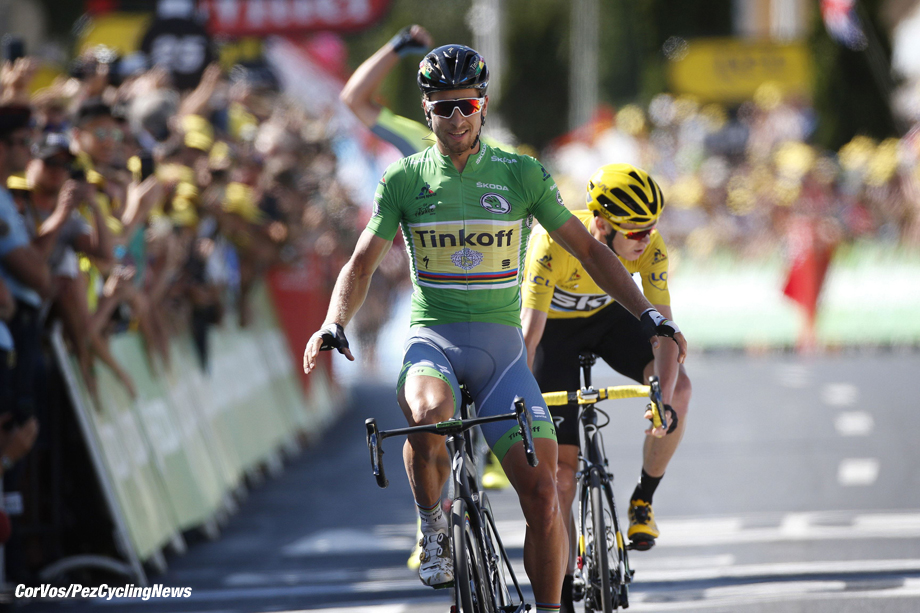 How it went down: It was a shorter day on the menu, at ‘just’ 164 kilometers. However, it came with the archetypal warning of the grizzled old-time directeur sportif: “You can’t win the Tour on a day like this, but you can lose it if you’re not careful.”

Courtesy of a wind-assisted take-off, the field rocketed out of Carcassonne. The last time I was there, it was hot… painfully hot. The wind caused a few early splits, but as it came back together FDJ’s Arthur Vichot, the French national champion, escaped with IAM Cycling’s Leigh Howard. 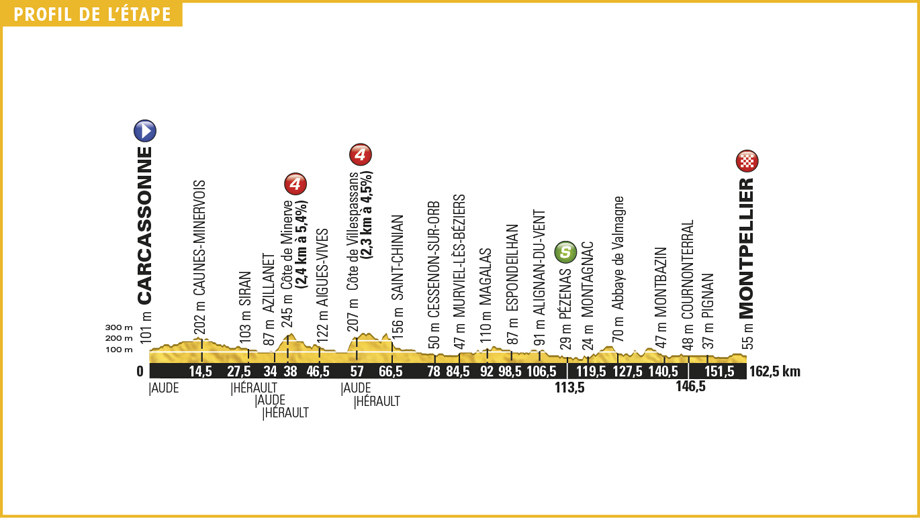 They made up the break of the day, so the peloton breathed a sigh of relief. But it was a restless relief… the wind was whipping across the roads of southern France, and caused multiple tumbles with the likes of Pinot (FDJ) and Howes (Cannondale-Drapac) on the deck.

Vichot was the man for the little hills today, taking the couple of classified climbs en route to the finish. It was as well to get something out of the day – the breakaway’s lead never climbed to anything remotely hopeful, with the sprinters’ teams keeping things in check, with help from Sky and co. 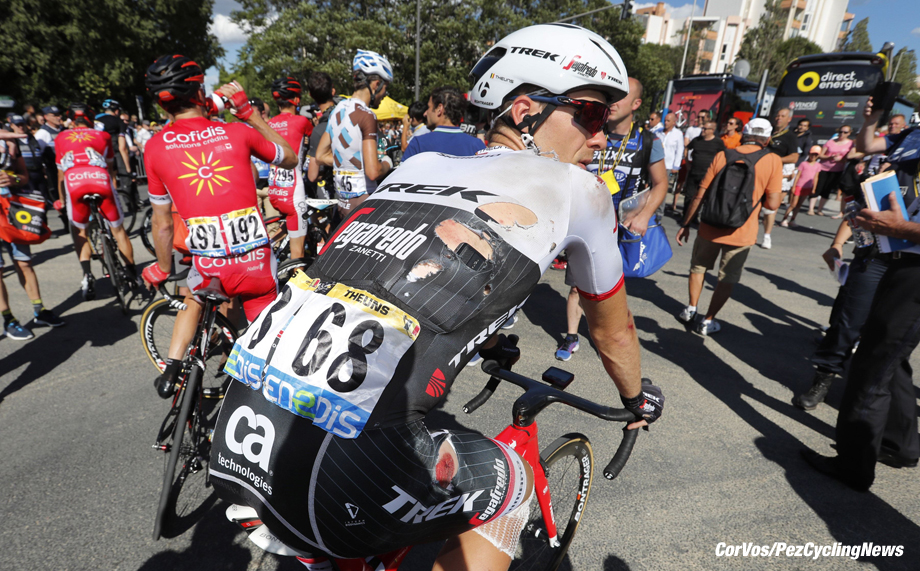 As we headed towards the half-way point, Tinkoff were on the front attempting to harness the weather conditions for their own nefarious tactical purposes. Under their pressure, echelons started to appear, with yesterday’s stage winner Michael Matthews (Orica-BikeExchange) among those caught out.

Approaching 70 kilometers to race, there were groups blasted all over the road, and Astana were taking charge. Vichot and Howard’s freedom lasted another ten clicks before the game was up.

Heading for thirty clicks to race, and as some of the main field’s dissident groups formed a coalition, there was another surge up front with Tinkoff, Etixx – Quick-Step and BMC forcing the pace. This had the effect of straining relationships, and just exhausting more and more riders. The sprinters’ teams seemed to be reluctant to fully commit to trying to control the chaos.

Inside 12 to go, Sagan and Bodnar took off, with Froome and then Thomas getting across. Suddenly, there was panic as the field started to split, indecision about who should chase and how hard, overall contenders caught too far back. Etixx – Quick-Step had to chase for a sprint finish, and got a hand in a chaotic finale from Lotto Soudal, Dimension Data (even as Cavendish needed a bike change), Katusha and LottoNl-Jumbo. 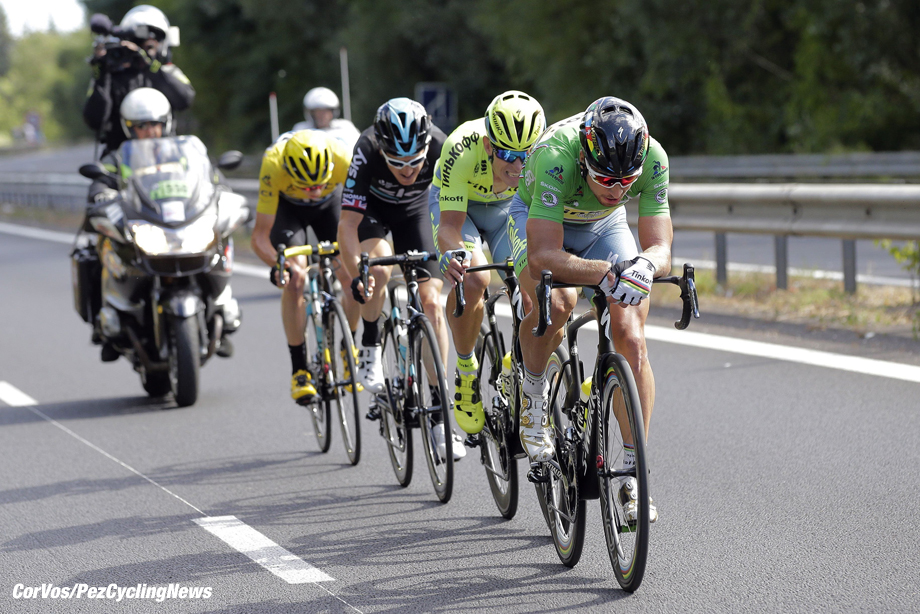 It was the General Classification favorites that were caught out, as much as the sprinters’ teams. Yates (Orica-BikeExchange), Martin (Etixx – Quick-Step) and Quintana (Movistar) were scrambling, and Joaquim Rodriguez (Katusha) was even further back.

Three kilometers to go, and Bodnar blasted through with the escapees holding 20 seconds’ advantage. Froome did his turns, and Thomas, but Sagan was just monstrously strong.

Froome absolutely drilled it towards the red kite before giving way to Sagan. Thomas had done his job, and Froome opened up the lead-out, Bodnar took over but Sagan easily won the sprint from Froome.

It looked like Sagan wanted to gift the stage win to Bodnar for his incredible work, but once Froome opened his sprint, Sagan had to make sure.

The gap was only six seconds to the sprinters’ group led by Katusha’s Alexander Kristoff at the line, but Froome took bonus seconds to further open the gap to his challengers. Not only that, it was another unexpected psychological kick in the teeth to the other overall hopefuls. They must now be wondering what else Froome is going to try. 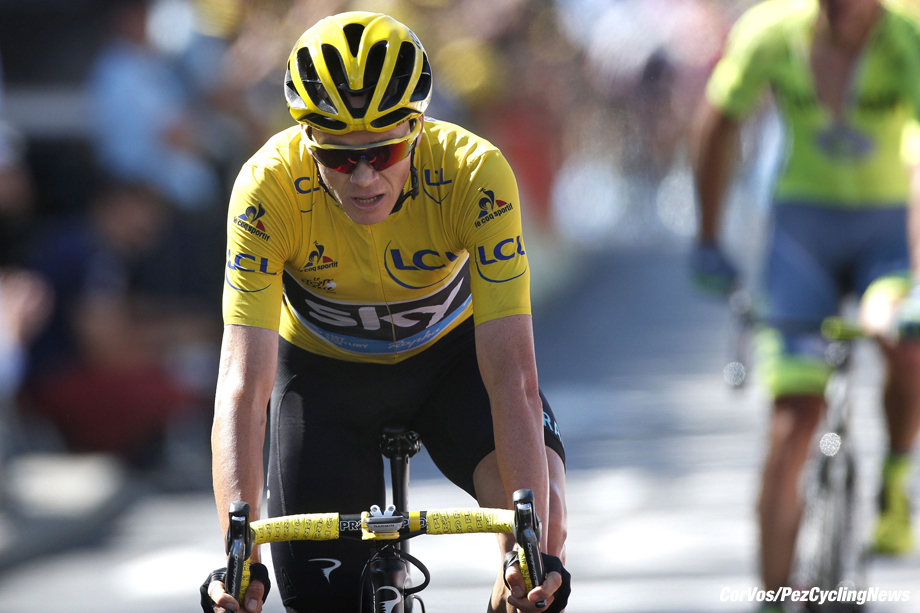 Keep it Pez, as the Tour de France heads for the Giant of Provence tomorrow. See you at Mont Ventoux… weather permitting!

• And keep your eyes on Steephill.tv for live stage viewing near you. 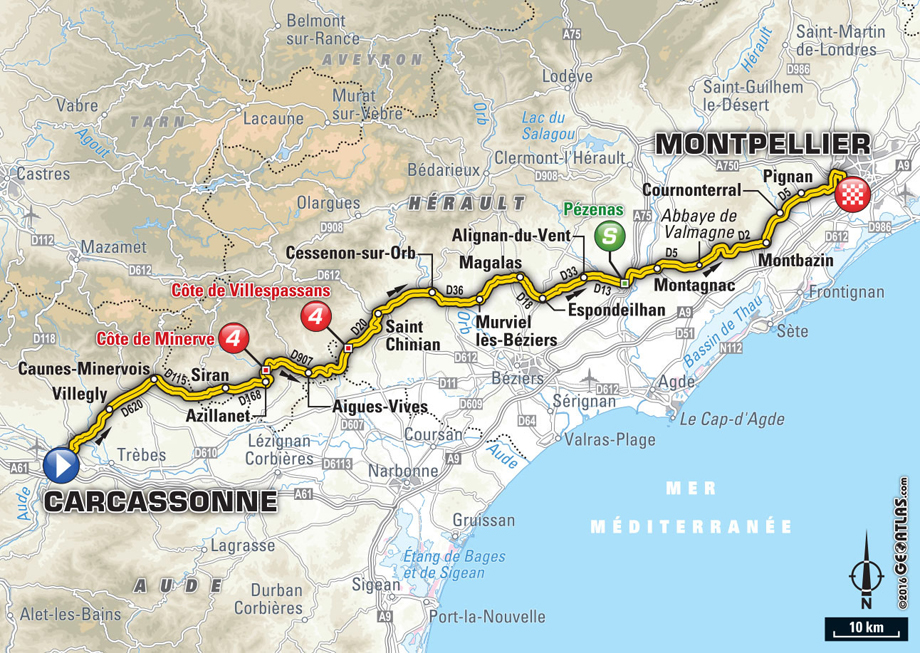 The mythical Mont Ventoux returns to the Tour!