Tour Roadside: Ed Hood has started his 2016 Tour de France roadside and hit the French ground running and run all the way to Bern in Switzerland for the finalé of stage 16. His first day had all the fun of a Grand Tour, plus a free lunch and a battle with the Swiss traffic. Tour back-stage PEZ:

Radio Nostalgi delivers Sylvester, ‘Mighty Real’ as a first tune. It’s a sign – it’s going to be a good day. We’d planned to pick up our credentials at the stage finish last night, in Culoz. We had three hours to get from Geneva airport to the Permanence at the stage finish at Culoz – plenty of time… 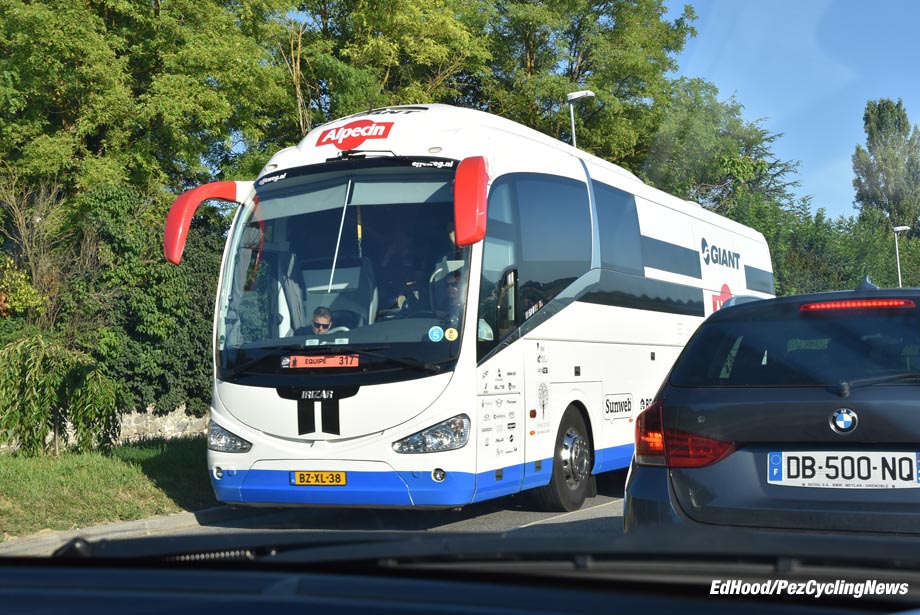 That was ’til we got to the Europcar desk, it took 90 minutes to get the car which meant we got tied up in the aftermath of the race and it was ‘re-route the satnav to the digs’ time. Still, we got some nice team bus pics…

The grub at the Campanile was nice though, we slept well and breakfast was cool too, outside, in the sun. And our welcome at the Swiss border was wonderful; ’40 Euros to use our roads’ said the nice policeman. No wonder there’s so much money in Switzerland. We reach Bern, eventually – the traffic is horrible.

The creds were handed over in world record time and we even got a free lunch – this is the journalistic life I’ve long dreamed of. But it’s really not ‘us’ and we set of to ‘march or die’ the last few Ks – we gotta see these cobbles and this hill for ourselves. 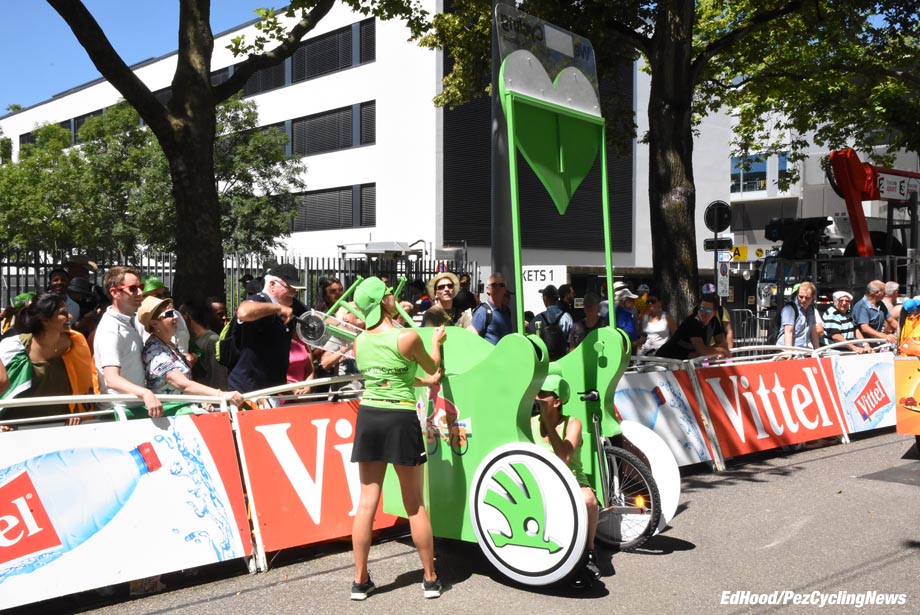 The Skoda girls are working the crowd with some hand cranked device competition – get a good score and you win a hat. Later in the afternoon they’re throwing hats out by the hundred from the car… 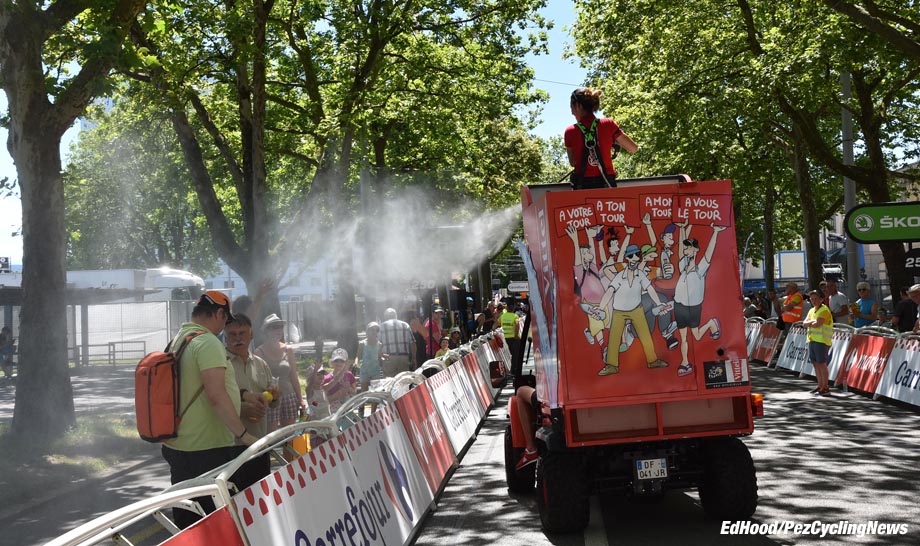 And the Vittel girls are cooling us off – nice on a day like this. I’m not sure my Nikon enjoyed it though. 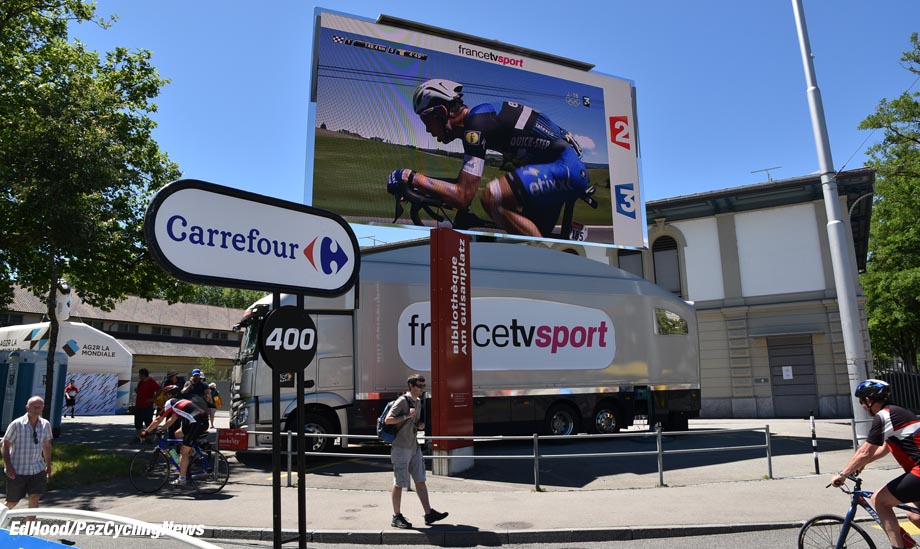 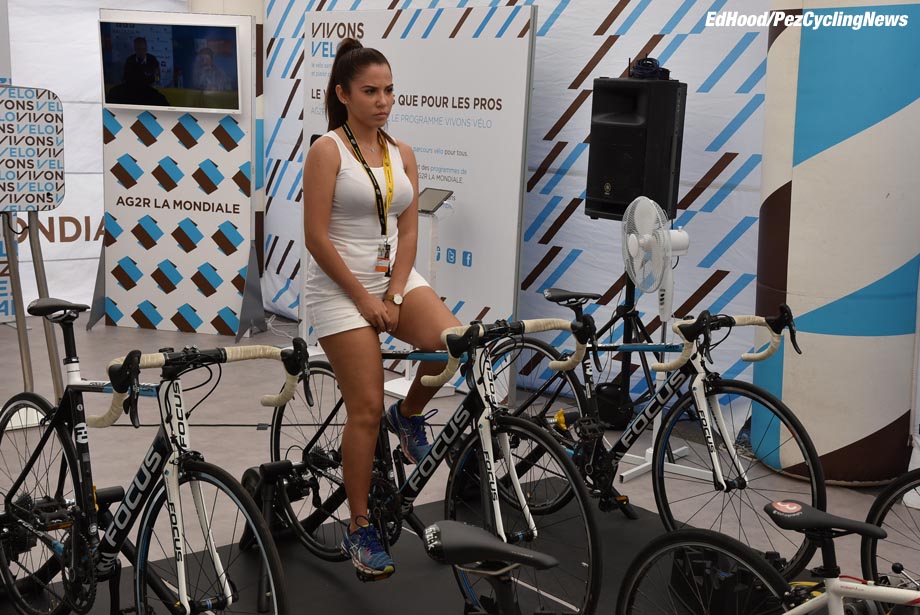 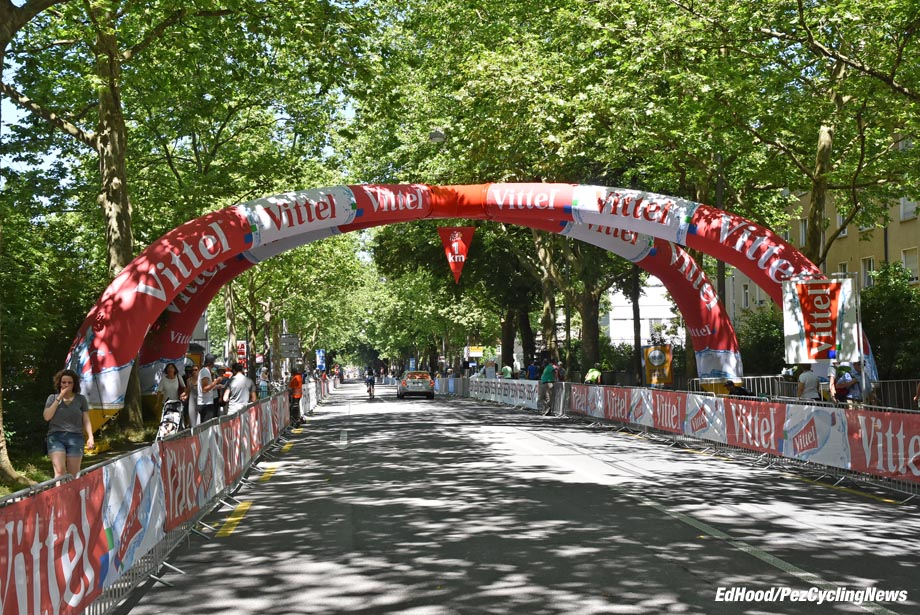 The finish kilometer is arrow straight for the full 1,000 meters, there’s a ‘but’ – it comes straight after the steep climb up from the old cobbled bridge across the river which in turn comes after an initial sticky cobbled ascent up from the river bank. 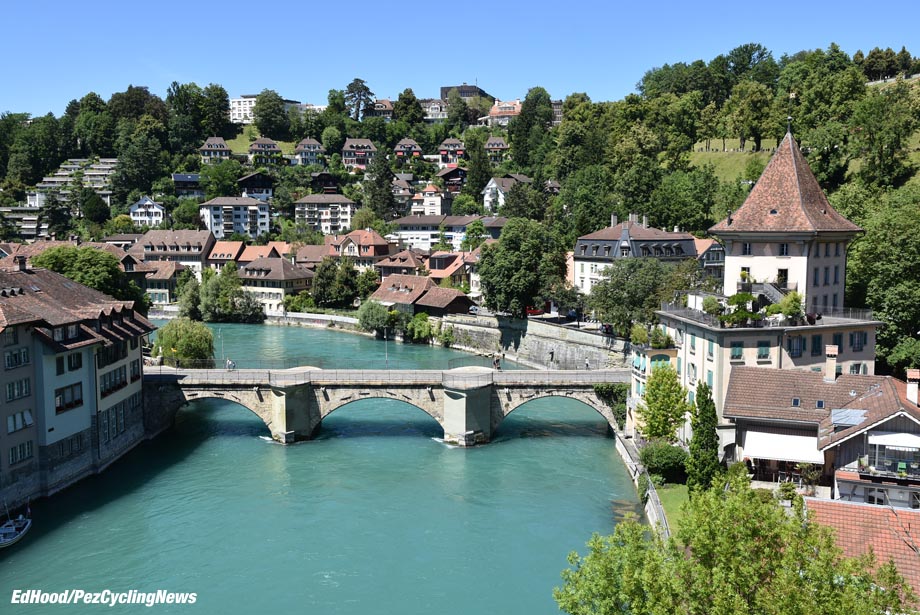 It’s a savage finish – at one time it would have been made for Cancellara but now it says; ‘Sagan, Matthews, Valverde’ – it’s too tough for the real fast guys, but maybe Kristoff? 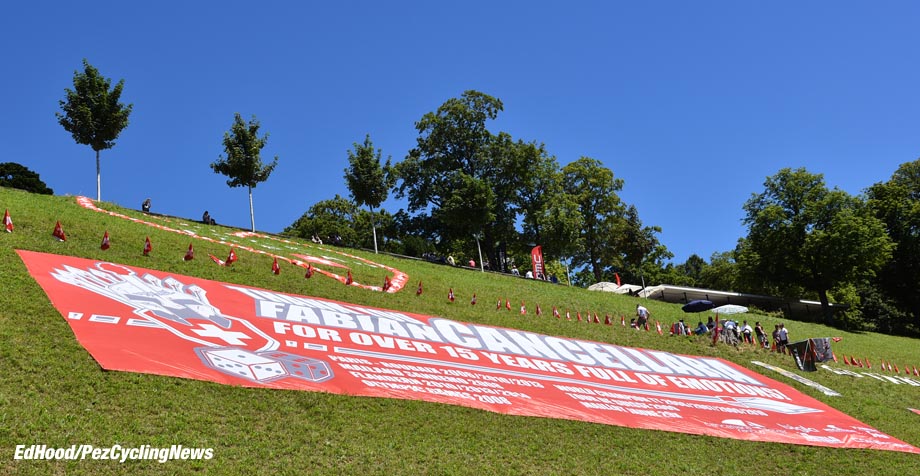 We thought there would be a lot of roadside love for Fab but apart from the big banner on the hillside, nada. Maybe it’s because he’s no longer bringing big prize money back to Switzerland? 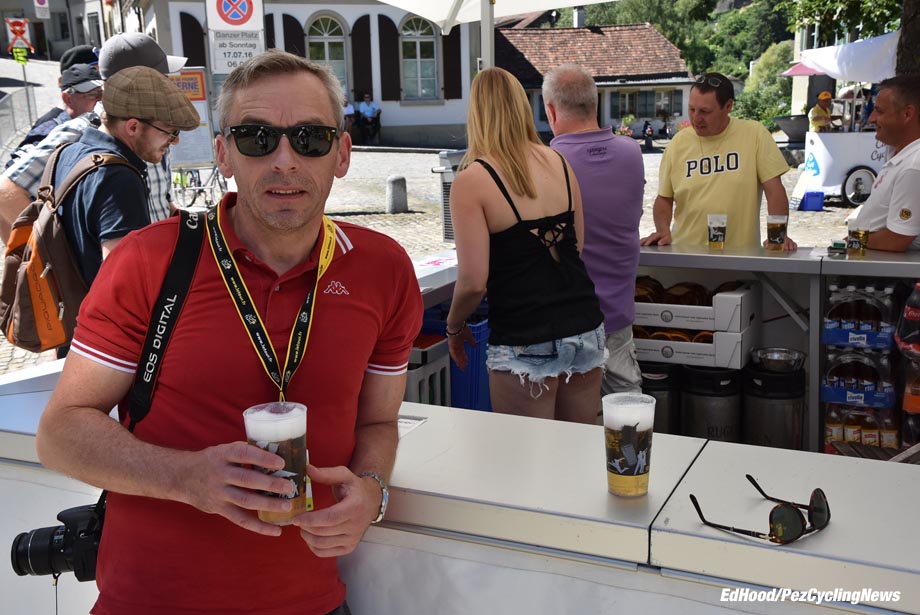 A forced march always requires hydration – it was a nice brew but at seven Euros a pop it should be! 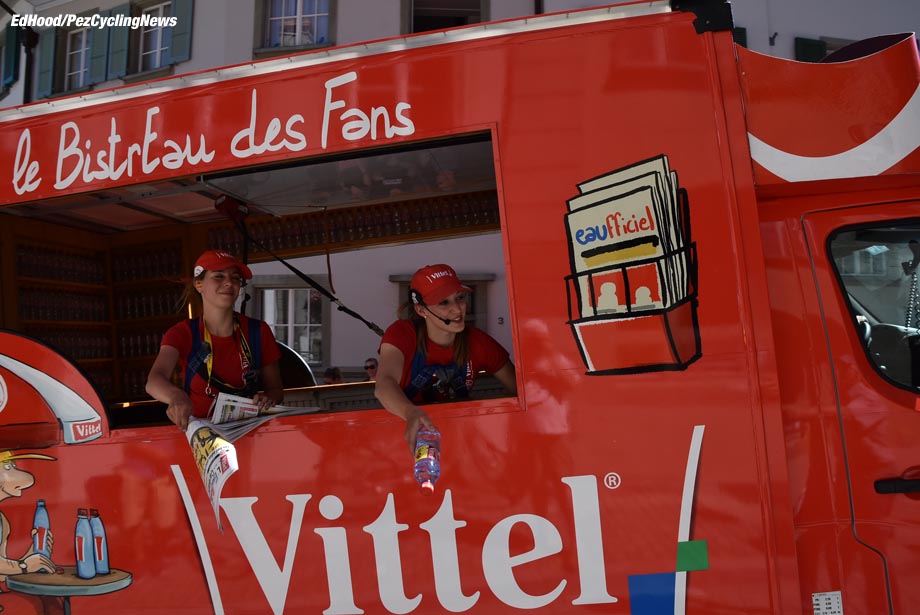 Caravan! Always nice to get a cool bottle of water stuck in your paw. 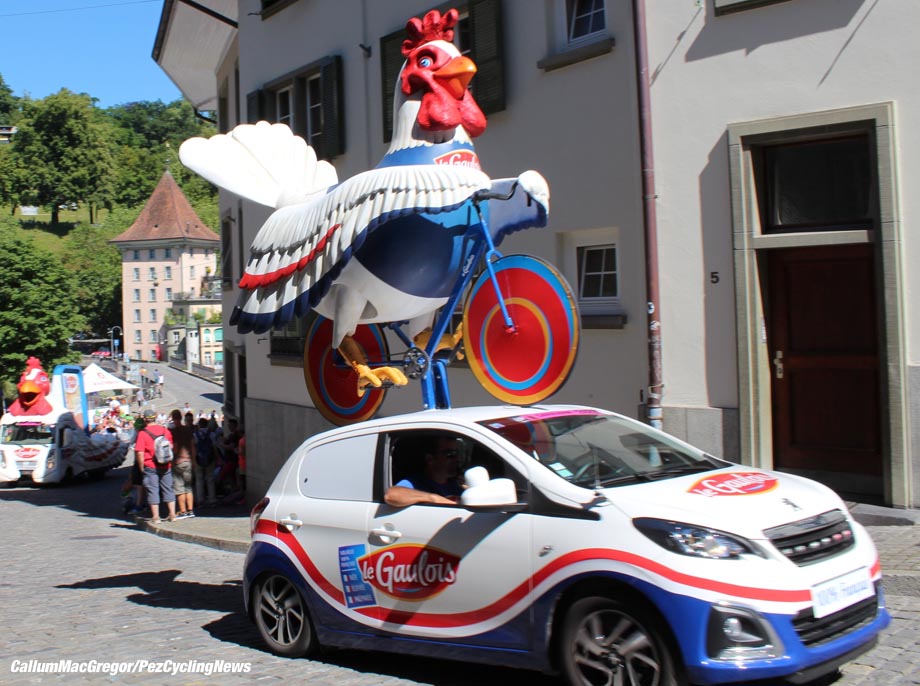 The swag was flung out by the bag load; we resisted – bar a hat or two – and the Haribos, of course. 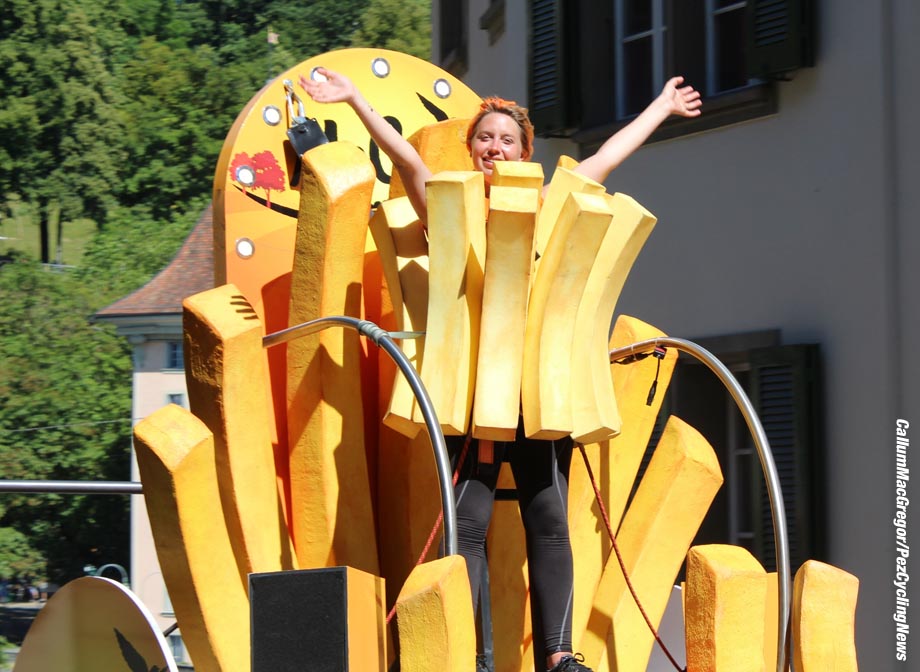 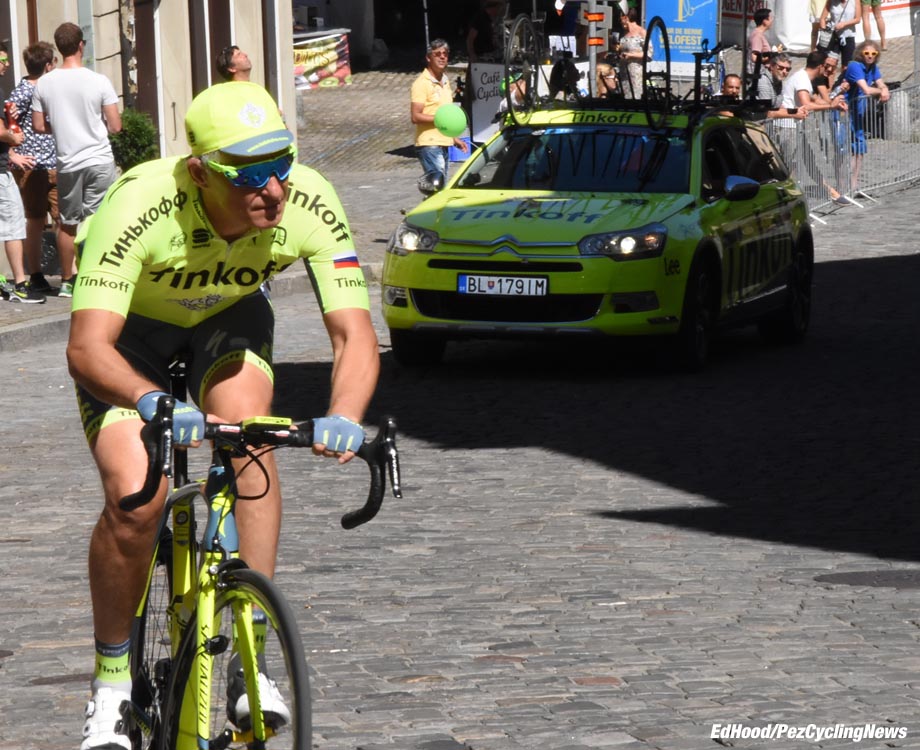 Who says Oleg is on an ego trip? Not me, those Russian billionaires don’t mess about. Every time we check the race situation it’s the same, Martin & Alaphilippe (Etixx) out front – Tony obviously putting in a HUGE day as part of his Rio prep. Alaphilippe eventually sat up but it was late in the day before Tone cracked and Rui Costa (Lampre) headed off up the road. 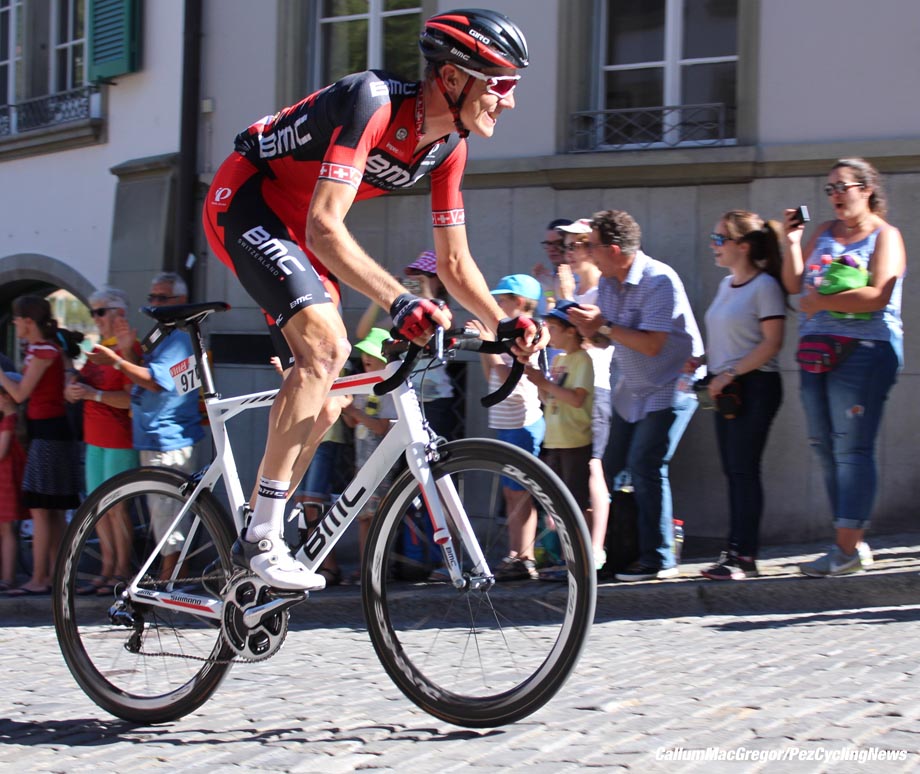 But the first man to burst around the corner at the foot of the climb was former Swiss Champion and Home Boy, Michael Schar (BMC) – but he was going nowhere with a rabid peloton on his heels with maillot jaune Froome (Sky) safe near the front. 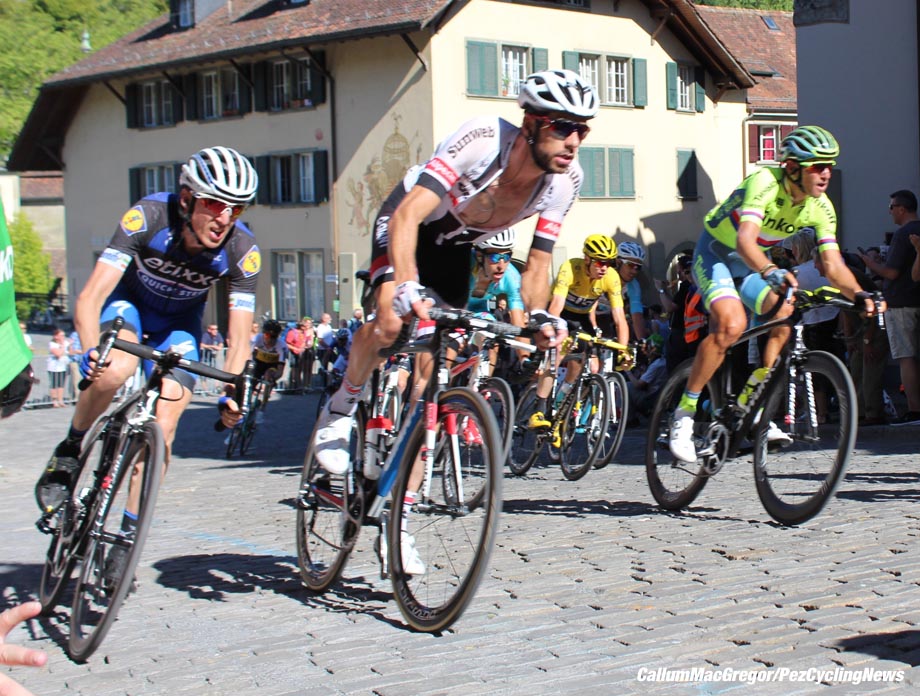 A man not enjoying the mayhem was Dan Martin (Etixx); but if you’re a GC man then you can’t let those seconds slip away. 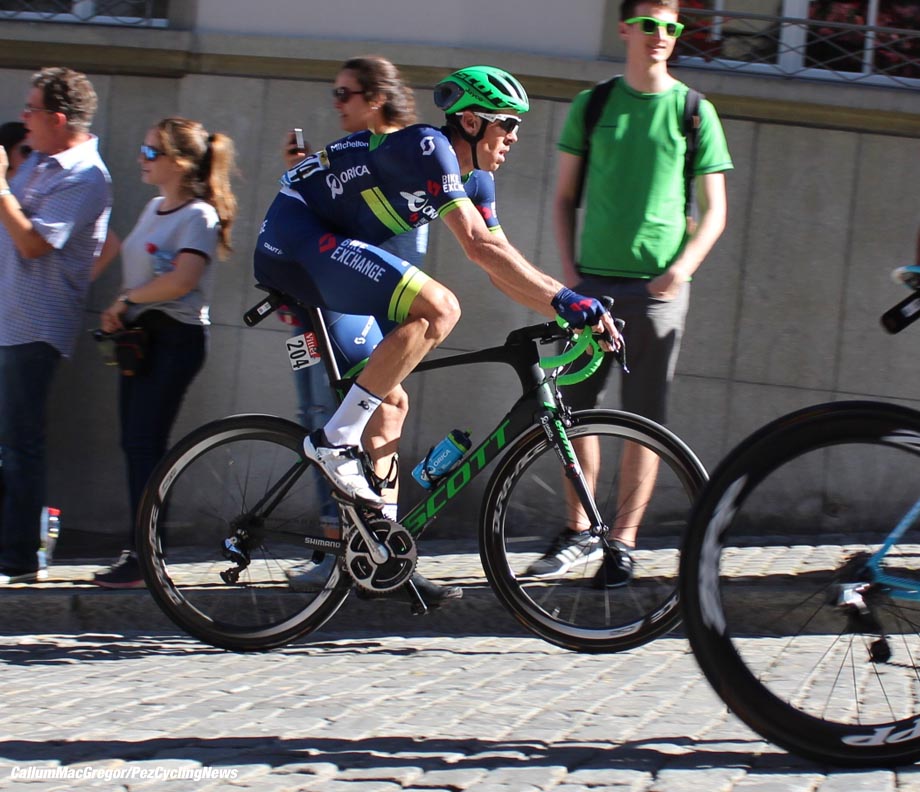 Matt Hayman (Orica) should have been at home on the cobbles but didn’t seem too enamored, somehow. 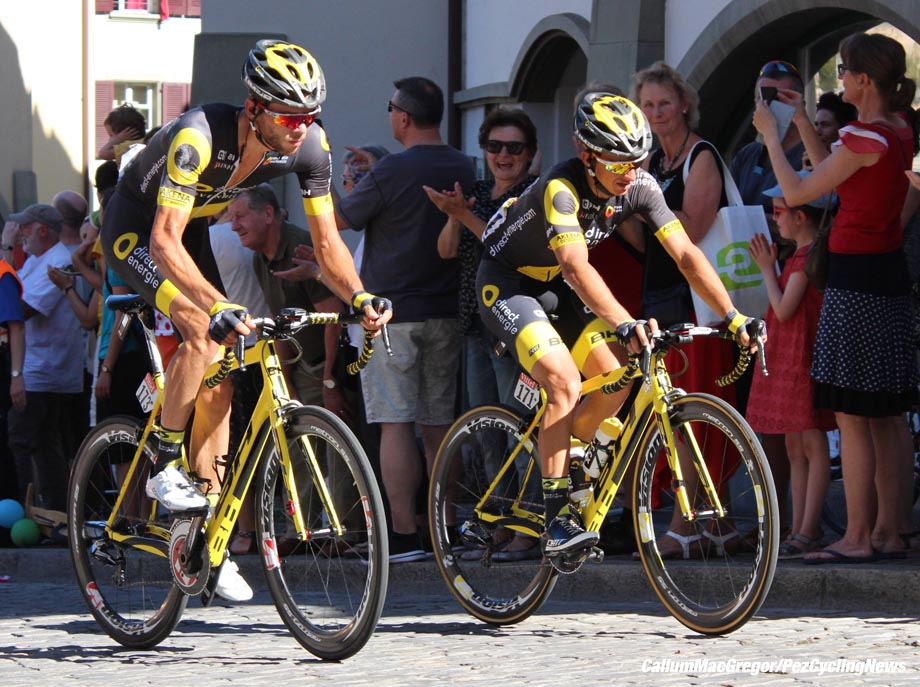 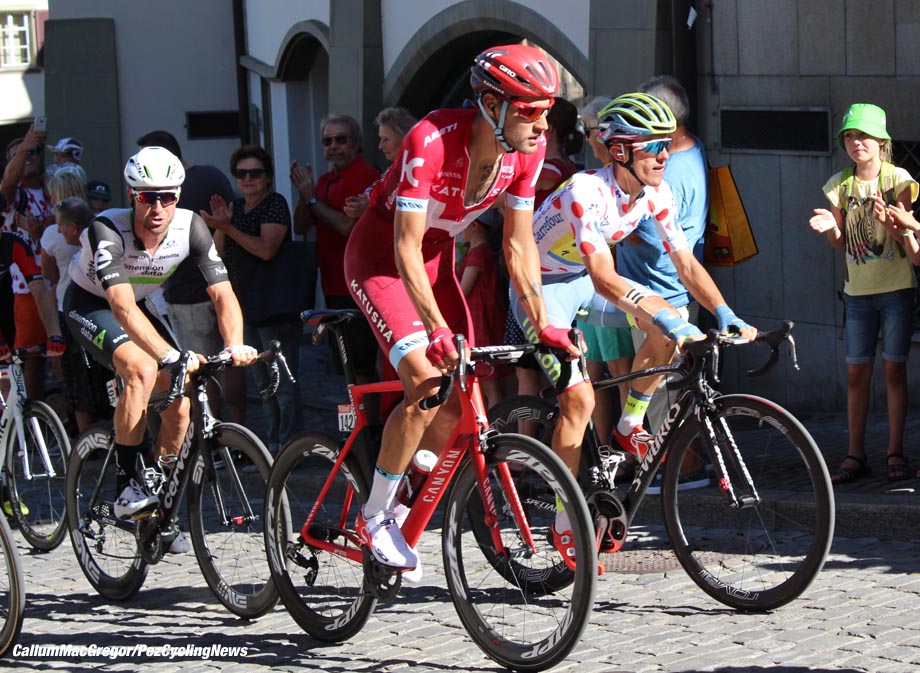 Rafal Majka may be king of the mountains but he counted himself out of this madness and was content to Pedal in well down. There are still a lot kilometers and cols to cover but it’s looking like Tinkoff will be taking home the vert and pois jerseys. 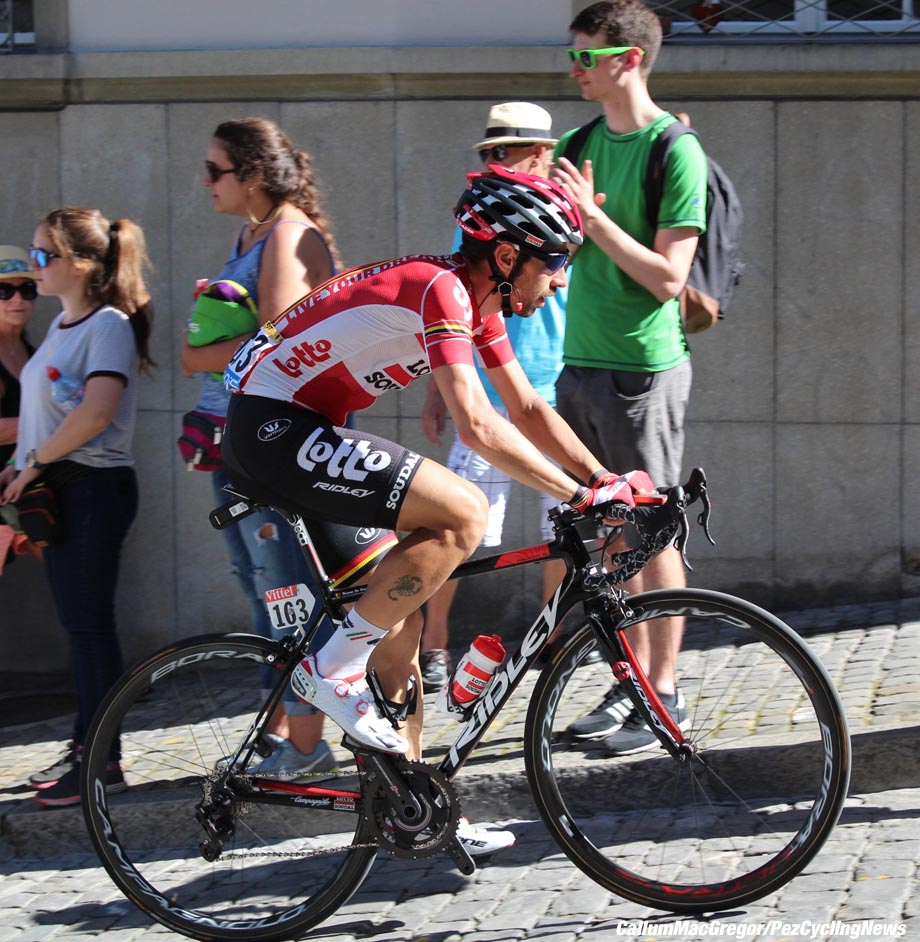 Similarly, Lotto’s Thomas De Gendt may have tamed the Ventoux but this was another kind of climb altogether and he decided to ‘pass.’ 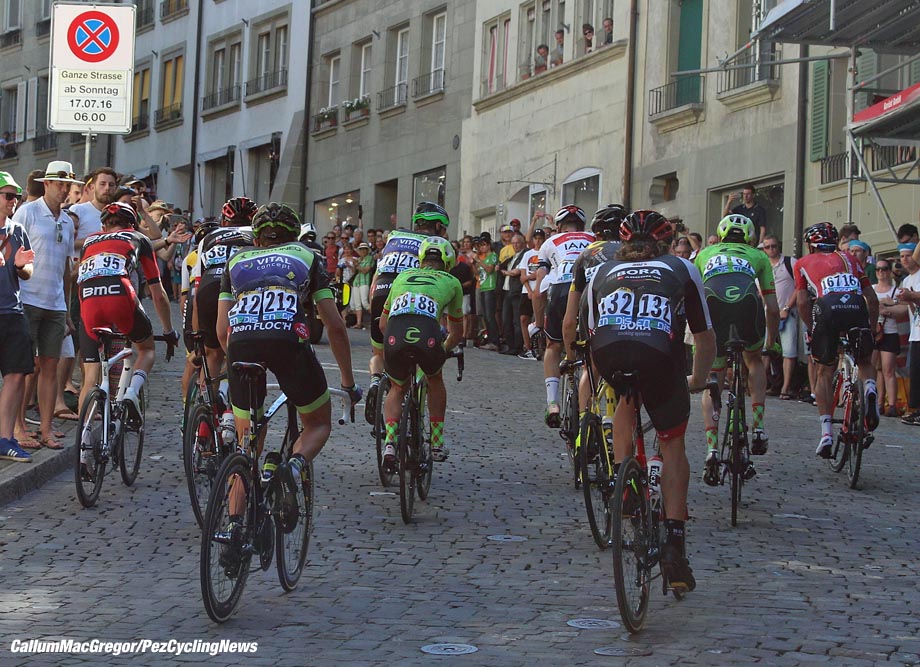 We’d expected a compatto peloton but not a bit of it, one little group of wasted men followed another. 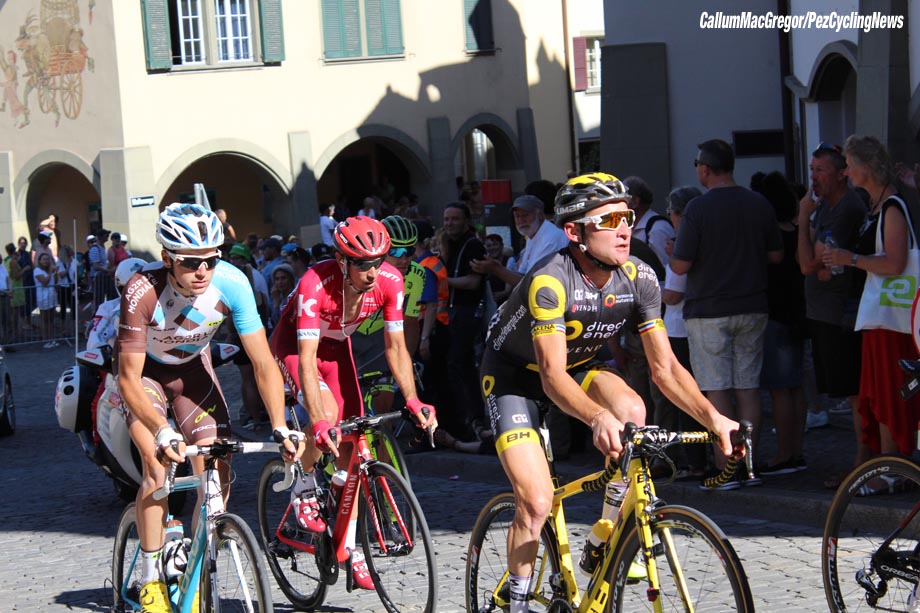 Tommy Voeckler (Direct Energie) was too shocked by the sight of the cobbled horror to even grin. There was time when he’d have loved this finale… 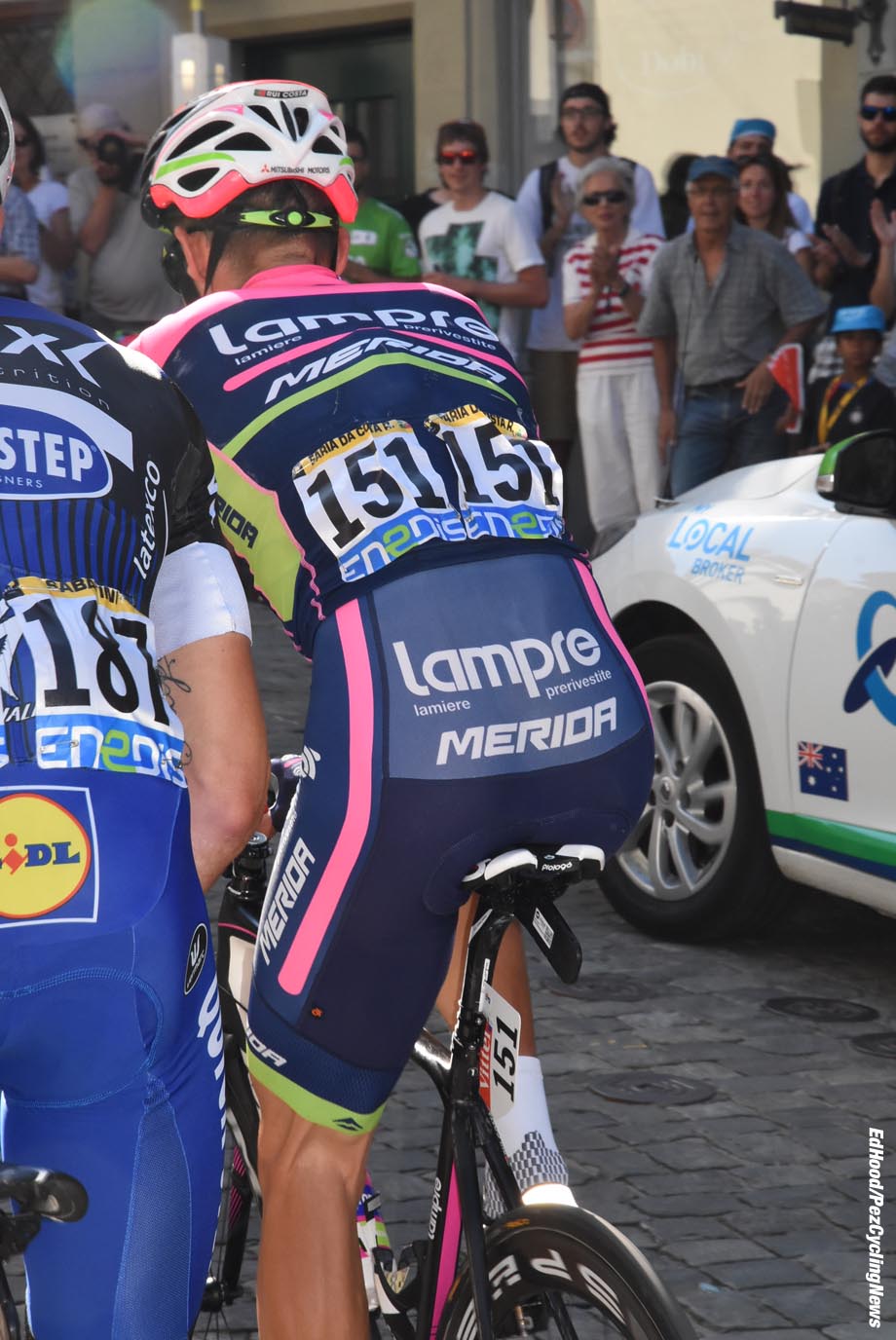 And the man who’d countered when Tone Martin finally came back – Rui Costa? Wasted, just those little bands on his sleeves remind you he was once world champion. 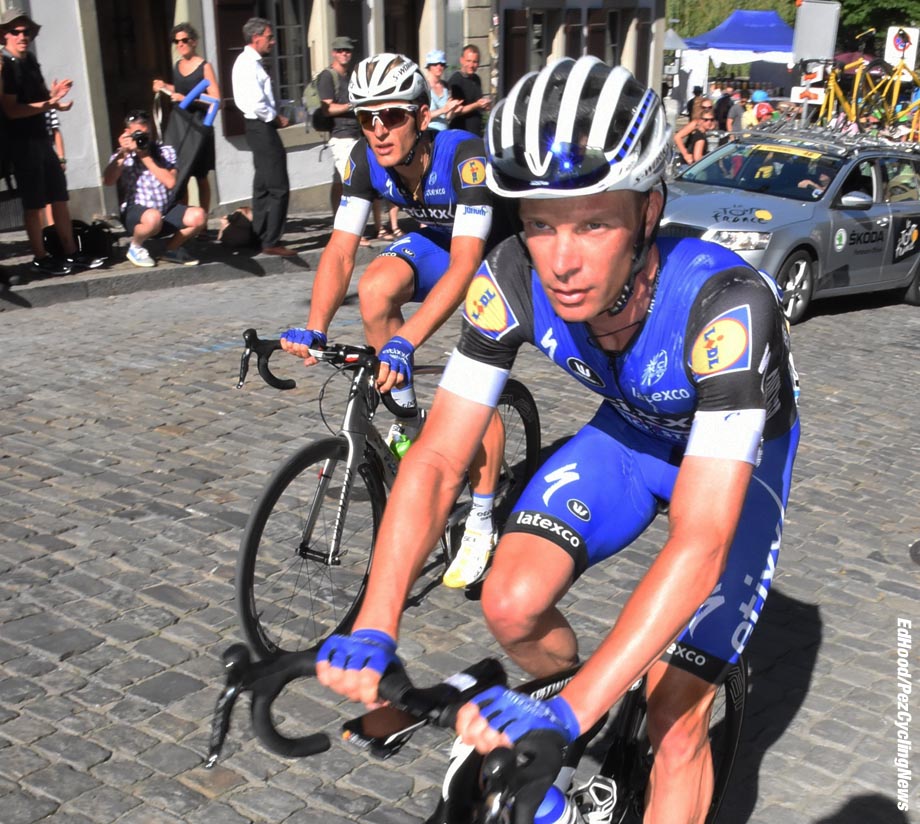 And if the hill was too big for Cav and Coquard it was waay too big for Kittel (Etixx), chaperoned by Kuipke King, Iljo Keisse. Iljo’s winter board rivals must be really pleased about all that endurance and core that the Gent man is going to bring from riding le Tour…

We weren’t surprised to hear that Sagan had won; good to see Kristoff second and Degenkolb fourth – he’s on the way back. Cancellara? He was sixth, not bad at all – but what was it Lance said? “Pas de cadeaux.”

Rest day tomorrow – don’t worry, we won’t be going on the beer, it’s too expensive. 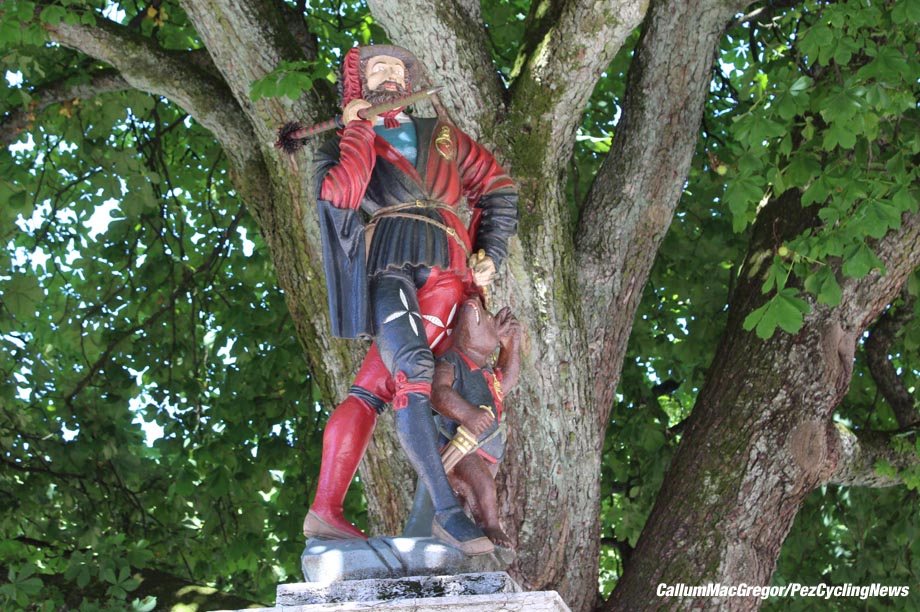