Race Report: Chris Froome as good as carved his name in the 2016 Tour de France trophy with a dominant ride on the uphill time trial to Megeve. As expected; TT specialist Tom Dumoulin rode into the lead and then had to wait for last-man off, Froome, to take the top step and yet more overall time.

For many of the starters it was a case of just making it through the day and trying to recover for the two remaining Alpine stages. Nicolas Edet (Cofidis) was the early leader as the French enjoyed something of a renaissance after a difficult Tour so far. But, it wasn’t to last and soon the hot seat was populated by the familiar figure of Tom Dumoulin who was looking to record the third stage win of this Tour. He held off everyone until the final rider who was a very fast moving Chris Froome. The Brit was losing time over the first half of the stage but he completely flipped the standings in the second half and proved that he is by far the best rider at this years Tour. Bauke Mollema and Adam Yates lost time but they hung onto their podium places but the places from second to tenth have condensed and although the yellow is all but confirmed the podium fight should maintain interest over the final four stages. 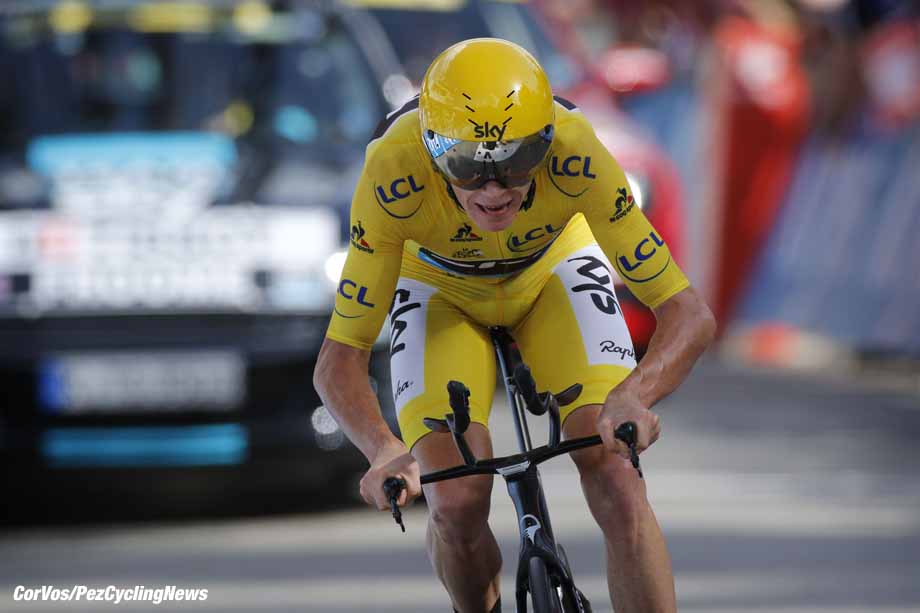 Route
The final time trial of the 2016 Tour was an uphill effort taking the riders from Sallanches, 560m, to Megeve, at 1,095m. The 17km course started with 4km of flat before 2.5km of steep riding to the top of the Cote de Domancy. The climbing eased off from there but the riders were constantly heading upwards until 2km to go where they finally got to experience some downhill. It’s the second of a quartet of stages that will decide who will win the 2016 Tour de France. The town of Sallanches hosted the 1980 World Championships, where Bernard Hinault took a solo victory, the French will be hoping that another one of their countrymen can take victory before the book closes on another edition of the Tour de France. 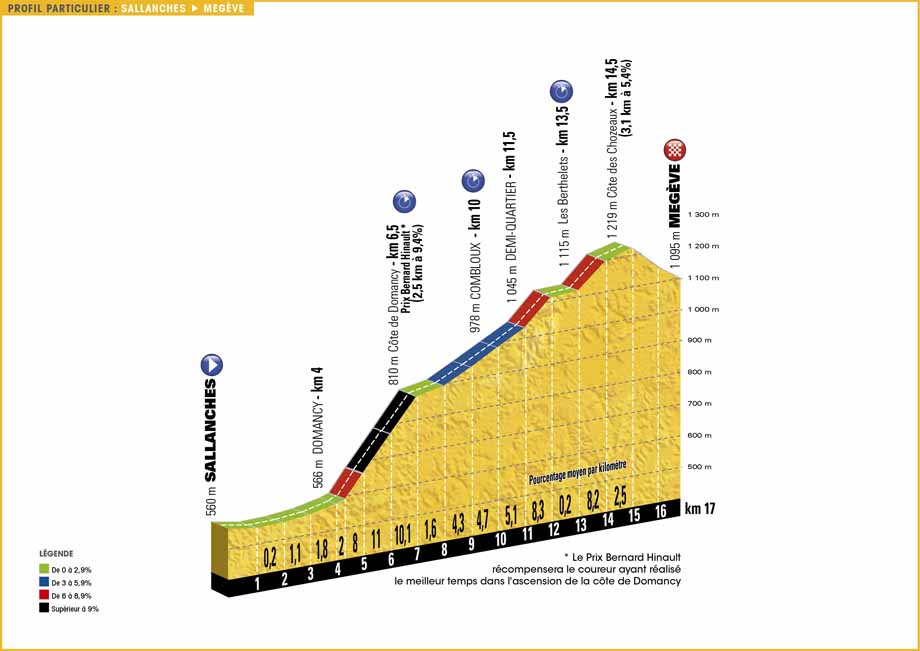 Making it through the day
The first rider off was Sam Bennett (Bora-Argon 18) who’s been struggling through the Tour since injuring himself in a crash on the first day. His team mate Shane Archbold crashed hard yesterday and broke his pelvis, he continued on but was a DNS this morning. Bennett put in a time of 36.47 but the early leader was Alexis Gougeard (AG2R-La Mondiale) who came home in 33:06 to lead by a minute from Maciej Bodnar (Tinkoff) with 34 riders through the finish line.

Gougeard had held off 54 other riders but it was a French substitution at the top as Nicolas Edet (Cofidis) pushed his countryman off the hot seat with a time of 32:37, 29 seconds faster than the AG2R rider. There was still all the big hitters yet to come but for the moment, it was a good return for the French on the Tour’s return to France.

After a period of inactivity in the top 10 there was more good news for Pierre Luc Perichon (Fortuneo-Vital Concept) who made it a 1-2-3 for France as he came in a provisional third with a 1.09 deficit. The French armada was broken up however by Michael Valgren (Tinkoff) who came home just 28 seconds down on Edet to snatch second place. After a lot of time where nothing happened it was now all happening at once, Jan Barta (Bora-Argon 18) was the next rider to push into the top five, he went into second just 21 seconds down on Edet. Tony Gallopin (Lotto Soudal) added a Francophile flavor back to the top three when he jumped to third 24 seconds behind Edet.

The podium positions were then completely flipped around when Romain Sicard (Direct Energie) set the fastest time with a 32:21 but he was almost immediately usurped by Jerome Coppel (IAM Cycling) with a 31.58. Nelson Oliveira (Movistar) continued his time trialling form with a provisional third, 31 seconds down on Coppel. There was yet more change at the top though as Ion Izagirre (Movistar) flew through with the quickest time of the day after 107 riders, a 31:46 to give him the lead by 12 seconds.

After an extended period in the hot seat, Coppel was turfed out and replaced by Thomas De Gendt (Lotto-Soudal) who took a one second lead into the final third of the stage. De Gendt was barely able to get settled before he too was displaced and two time stage winner this year, Tom Dumoulin (Giant-Alpecin) thrashed his time to threaten the sub 31 minute mark with a 31:04 to take the lead by 41 seconds. 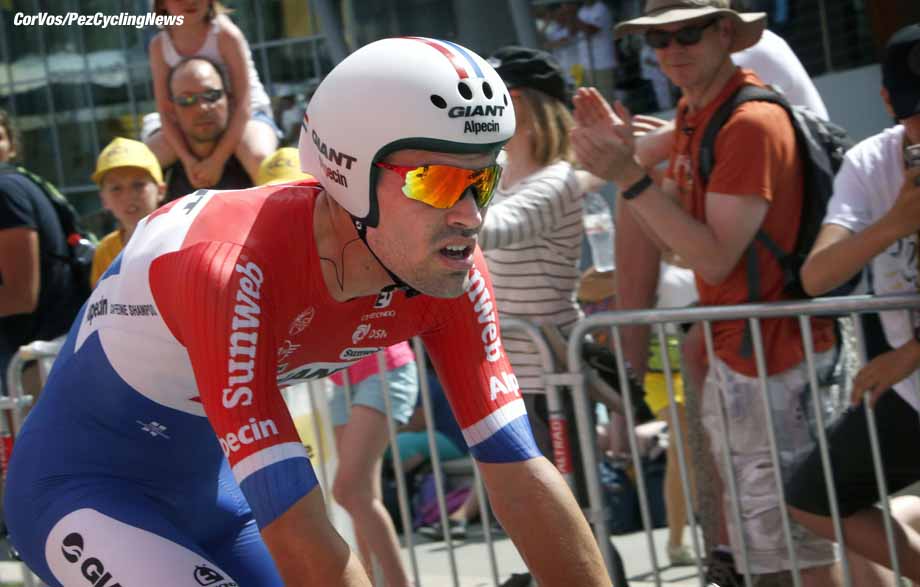 Dumoulin looked to have the win in the bag…

The Big Hitters
The top 15 were well under way and Joaquin Rodriguez (Katusha) was the early surprise as he got closest to Tom Dumoulin on the flatter early stages to record a third fastest time just 15 seconds down at the 6.5km mark. Meanwhile, at the finish, Stef Clement (IAM Cycling) had done a huge amount of work in the break yesterday but he wasn’t holding back and he managed a surprising fifth.

Fabio Aru (Astana) was the next surprise as he also blitzed the opening climb and sat one second down on Rodriguez whilst putting ten into Dan Martin (Etixx – Quick-Step) and 23 into Louis Meintjes (Lampre-Merida). The Sardinian was absolutely flying and he went through the second time check in second place, just 24 seconds down on Dumoulin. Meanwhile, Richie Porte (BMC) had set the fastest time at the first time check, nine seconds up on Dumoulin. 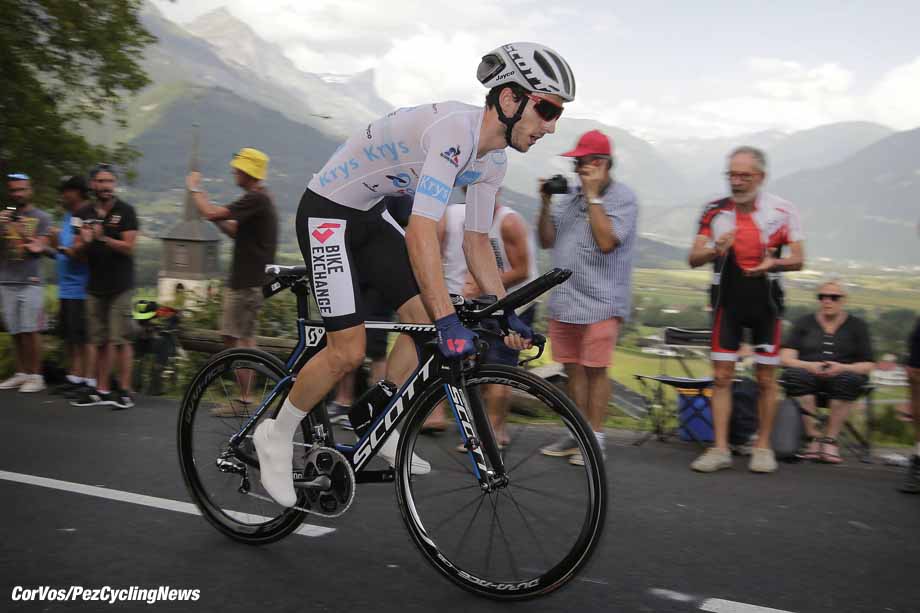 Adam Yates (Orica-BikeExchange) was getting better and better as the race went on and he hit the first time check just ten seconds behind Porte’s time. Aru was continuing his excellent ride and he went through the final intermediate time check just 16 seconds behind Dumoulin. The Sardinian wasn’t looking to slow down and he hit the line just twelve seconds down, gaining on Dumoulin on the final descent.

Chris Froome (Sky) had taken a disc wheel for the opening kilometers but he was 23 seconds down on Porte and 13 down on Yates after 6.5km. Yates was slowing as the climb continued to bite and he was 42 seconds down at the 10km mark, slower than Bardet, Aru and Porte. 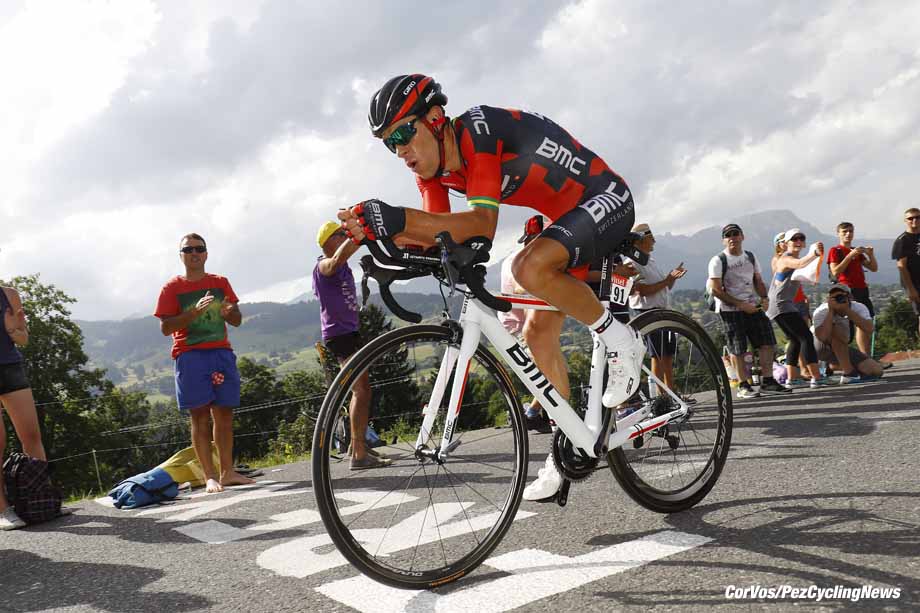 The Australian was flying on the final descent and he crossed the line with a provisional second place, just twelve seconds behind in an identical time to Aru. The Italian’s time was looking better and better. Bardet was the next to come into the finish, he’d been getting quicker and quicker as the climb went on and he conceded just 21 seconds to Dumoulin, nine to Aru and Porte. Quintana was sinking without a trace, he could only manage eleventh at the third checkpoint, 58 seconds down on Dumoulin and losing time to all his rivals. Yates had gone out too quick as well and he was just six seconds ahead of the Colombian on the third time check. Quintana was able to gain ten seconds on the final section of the course but he had still lost significant time.

Froome went through the second check point with an identical time to Porte despite still using the time trial bike with disc wheel. There was absolutely no danger to his yellow jersey yet. Yates had kept losing time since the opening time check and he finished 1:02 behind Dumoulin – losing time to all his major podium rivals. Froome was continuing his exceptional Tour and he went through the final intermediate check with a lead of 13 seconds over Dumoulin with just a short bit of climbing to go and a descent. 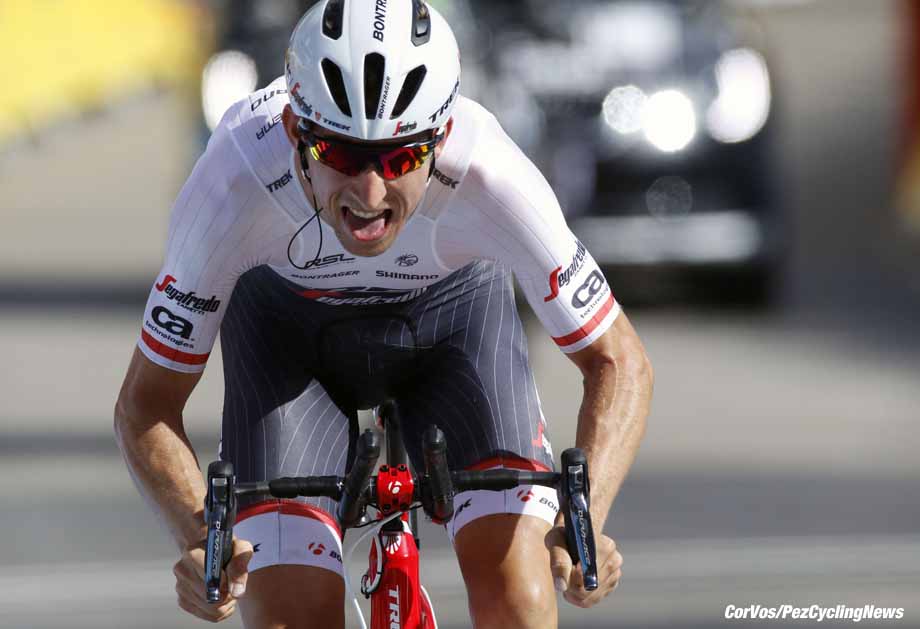 Bauke Mollema (Trek-Segafredo) had a very difficult time on the course and he joined Yates in the one minute back camp with a time of 1:03. That meant that all eyes were on the super quick Froome who had just kept ramping up the pace in the latter half of the time trial and he smashed through the line with the only sub 31 minute ride of the day, taking yellow from Tom Dumoulin by 21 seconds. His rivals will be wondering where they can take time on the Kenyan born Brit, he had outridden pure sprinters on the flat, pure climbers in the mountains and pure time triallers on the two time trial stages and surely now he was going to be the yellow jersey in Paris. 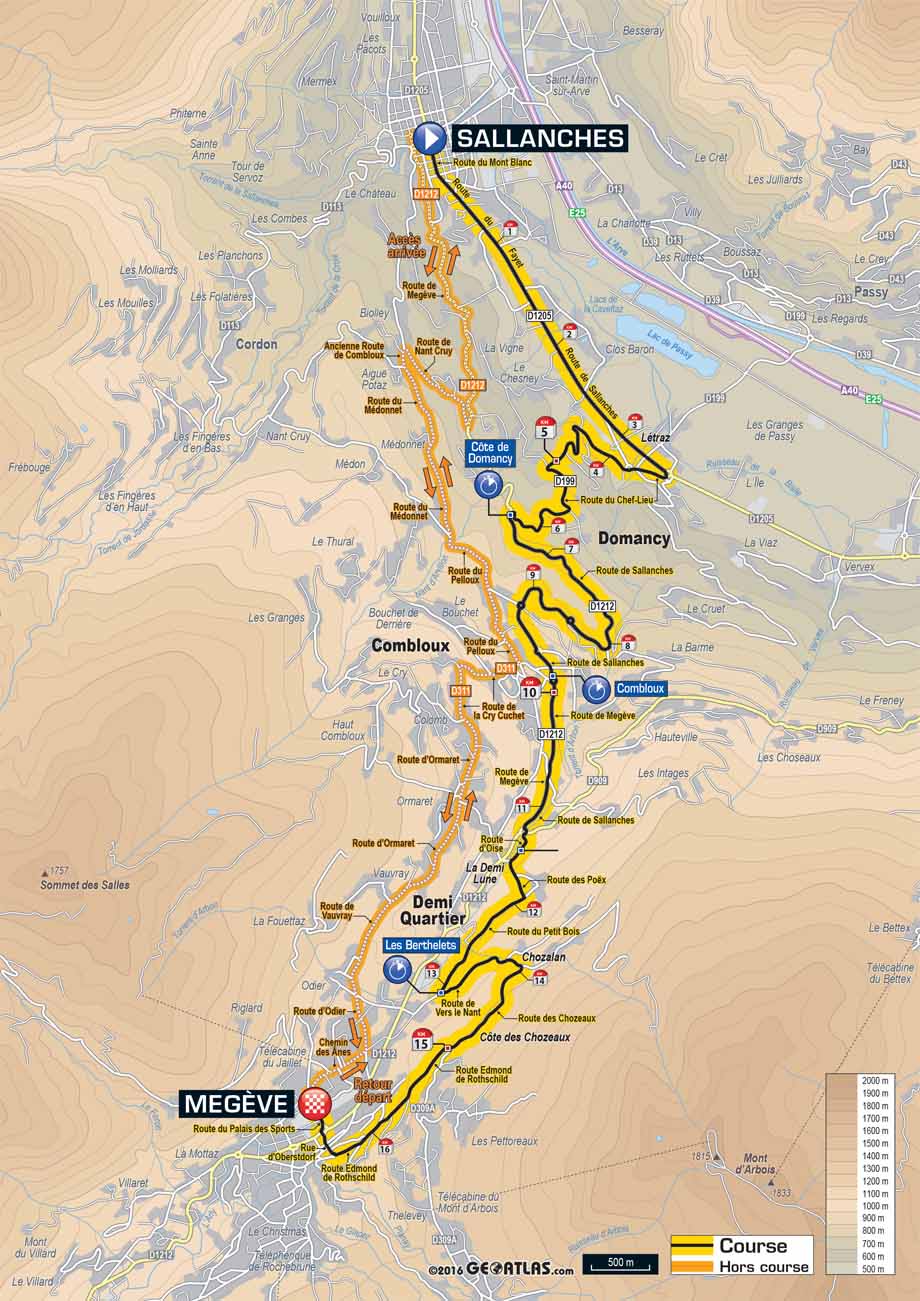