Race Report: Anything can happen in the Tour de France but normally you don’t expect to see the yellow jersey sprinting up the final few hundred meters of the Mount Ventoux without a bike. The craziness of the Tour spilled out onto the road as Porte, Froome and Mollema piled into the back of a moto in the final meters. Broken bike for the yellow jersey – run Froomy, run!

It was all calm at the start, the climb to Mount Ventoux had been reduced due to high winds at the summit and the riders would now be riding to Chalet Reynard, 6km below the usual summit. A 14 man break went clear after a very fast start and they were blown apart by the pacemaking of Thomas De Gendt in the early part of the climb. Only two riders were able to go with him, Dani Navarro and Serge Pauwels, and soon Navarro was sent packing from the break. Navarro was able to somehow find his way back on with less than a kilometer left to ride but he couldn’t match the sprint of De Gendt who led the trio out with 300m left to go and just couldn’t be passed. 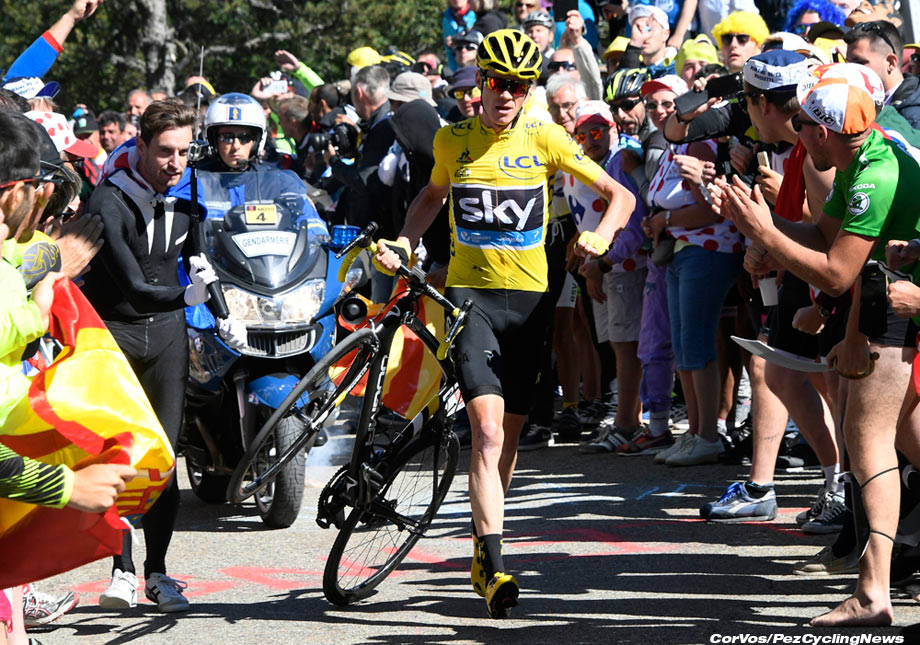 The real drama happened behind however as Froome, Porte and Bauke Mollema opened up a gap with Quintana going backwards. Porte was leading when the trio smashed into a motorbike which had stopped suddenly. All three went down but Mollema was able to get up and attack to the finish, Porte had bike troubles but he was able to climb back on. Meanwhile, Froome was left running up the climb in search of any bike that he could use to get to the finish, he was given a neutral service bike but he couldn’t make it work. He eventually crossed the line 1.40 down on Mollema and 1.14 down on Quintana who was the unexpected beneficiary of Froome’s misfortune. The other beneficiary was Adam Yates (Orica-BikeExchange) who moved into the provisional yellow jersey on a day that will go down in Tour history. 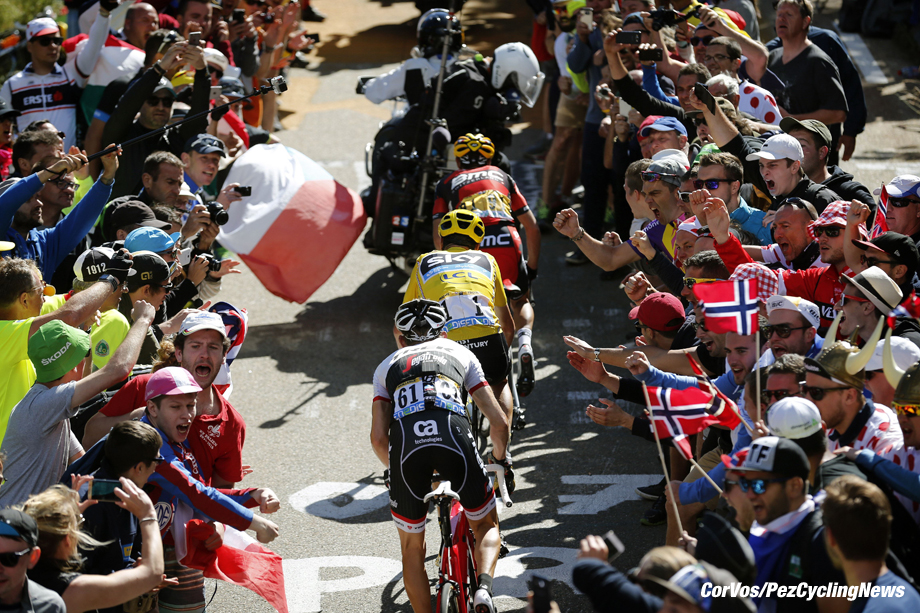 Moments before the crash

Route
The riders set out from the previous stage finish in Montpellier for a 178km ride to the mighty Mount Ventoux. The wind that affected yesterday’s stage has returned and its first casualty was the final 6km of the finishing climb. The peloton will finish at Chalet Reynard, 1,435m, having completed just under 10km of the final climb. The wind will also be a factor on the predominantly flat course towards the final climb. There’s just two categorized climbs before the foot of Ventoux but the riders will have the Alps in the eye line for almost the entire route, only disappearing when they head up the tree lined road of the giant of Provence. 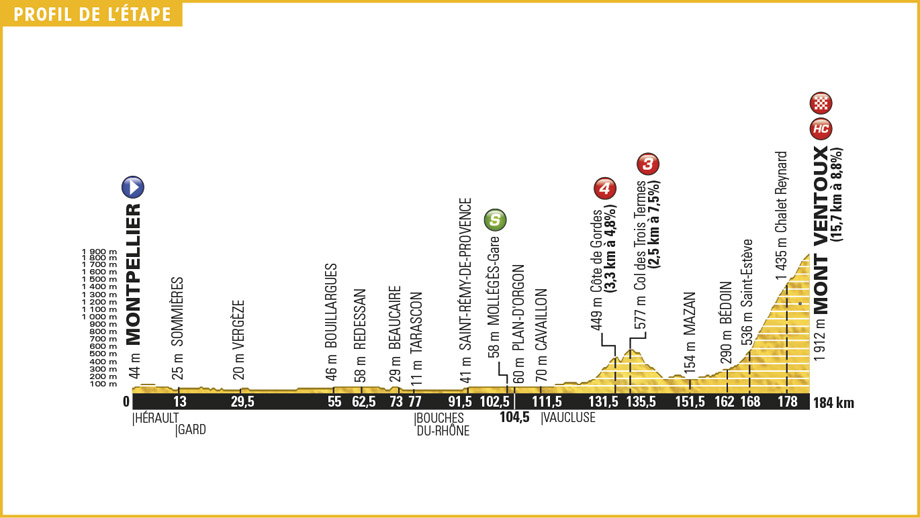 After the hard racing yesterday the main favourites were content to let this gap grow and after just 60km they had 17 minutes with the chasers languishing five minutes further down.

It was something of a repeat of yesterday as the hard wind splintered the group with 70km left to ride. Thibaut Pinot (FDJ) and Warren Barguil (Giant-Alpecin) were the big losers this time. Both had been caught out and they were left to close down the Etixx led peloton with a one minute deficit. Peter Sagan (Tinkoff) was also in this chase group although he will have seen this as a great opportunity to take it easy for the day after his exploits in the last two stages.

The other main favourites had kept out of trouble but Fabio Aru (Astana) was the next to end up in danger. A mechanical issue led to a bike change with teammate Fuglsang and a hard chase back onto the peloton. It was a poor bike fit and he was forced into a second bike change and another hard chase back into the fast moving pack.

The fast moving peloton was taking chunks out of the break’s lead but they still had over seven minutes as they made their way over the penultimate climb of the race. That gap was soon growing quickly as Simon Gerrans (Orica-Bike Exchange) came down, bringing down a number of Sky riders. Froome wasn’t involved but he went back to assist and Nairo Quintana (Movistar) was content to sit up and wait. Froome got back on, as did the Barguil group who had been chasing for the last couple of hours and it was altogether in the peloton with the breakaway flying off the front. Pinot was still left off the back as he continued his pretty miserable Tour. 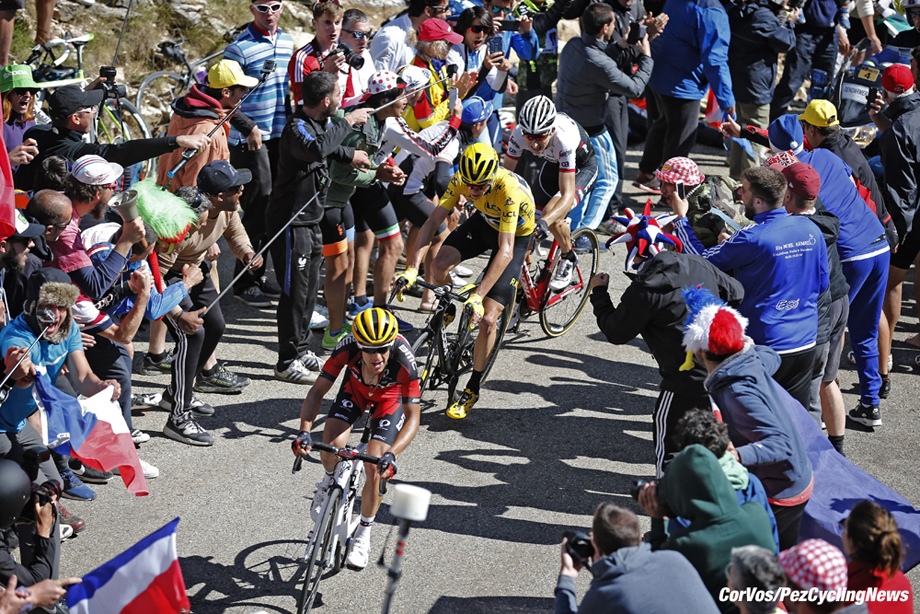 Just before they ran into the moto

Bedoin
The lead group were already reduced by one as Bryan Coquard couldn’t hold the wheels and he was sent packing before they’d even begun the final climb. Andre Greipel was, surprisingly, the first person to attack out of the lead group. There was no response behind as they let him have his fun on the run into the climb.

Greipel’s attack was short lived and soon he was sent out the back alongside Keisse as the whittling down process began. Sorensen and Lemoine were the next to go with Vanmarcke, Chavanel and Clement quick to follow.

After Teklehaimanot was spat out the back there was just four riders left as De Gendt drove the pace hard. His pace then unhinged Lindeman leaving just Pauwels and Navarro in the Belgian’s wheel.

As the main peloton hit the base of the climb the chase was led by the Sky train. Froome had four teammates left as they headed up towards Chalet Reynard. Their dominance was questioned though as Alejandro Valverde (Movistar) went off, forcing a reaction. He was brought back at the expense of Nieve for Sky, but Quintana was the next to hit the front. His attack stretched out the peloton but he was brought back without the sacrifice of another Sky domestique. Quintana hadn’t dislodged Froome but he had sent Dan Martin (Etixx-Quick Step) packing as the climb picked up.

In the front De Gendt was the first to attack out of the leading trio and he immediately put his companions in difficulty. Pauwels was slowly back into his wheel though as Navarro looked to be conceding the stage victory. De Gendt went again however and Pauwels was slower to respond but respond he did with 2km left to ride. 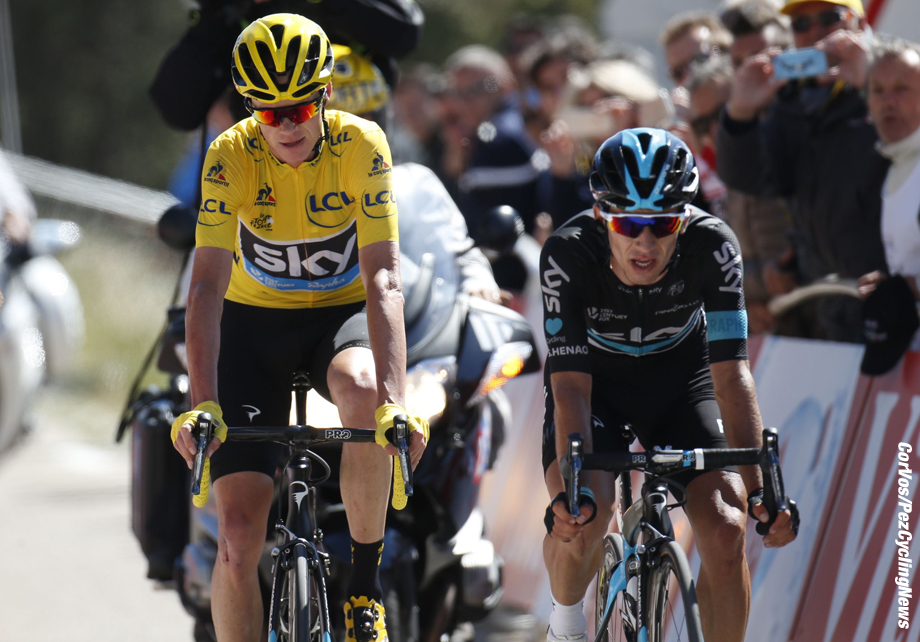 Froome finished with some help from Henao

GC Attacks!
Froome had sat behind his team mates but he attacked out of the peloton, only Porte and Quintana could follow his first acceleration but his second acceleration distanced Quintana. The Colombian was heading backwards quickly as Porte and Froome flew up the mountain. Bauke Mollema (Trek-Segafredo) had missed the initial move but he had found a second wind and caught the duo as Quintana was left to wilt in the sun.
Up front Pauwels and De Gendt were fighting each other and this allowed Dani Navarro to get back to the front with just 1km left to ride. De Gendt was forced to the front with 500m to go and he led out the sprint. Navarro was immediately distanced and Pauwels just couldn’t get round his countryman. De Gendt took an excellent win but the real drama was happening behind. 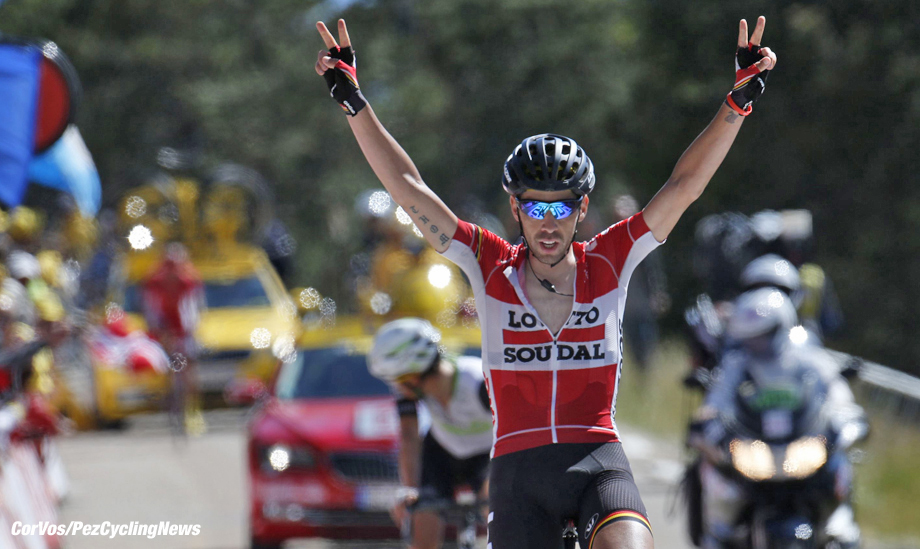 Porte was leading the GC trio when he crashed into the rear of the camera motorbike taking down Froome. Mollema went down but his bike was unaffected and the Dutchman continued on ahead of all the other GC riders. But Porte had to put his chain back on whilst Froome was left running up the climb between the deep crowds. Froome eventually managed to get on a neutral service bike but it was unrideable and by the time he’d been given a replacement bike he’d been passed by all the GC contenders.

The Quintana group had been held up by the crash as well but they had stayed upright and made significant gains on the British rider. Adam Yates looked like he would be the yellow jersey but so much will be in the hands of the commissaries. It’s another case of a motorbike helping to decide the result of a road bike race. Mollema had been the real victor however, he’d gone down but had stayed calm and jumped back on his bike to push home his advantage. 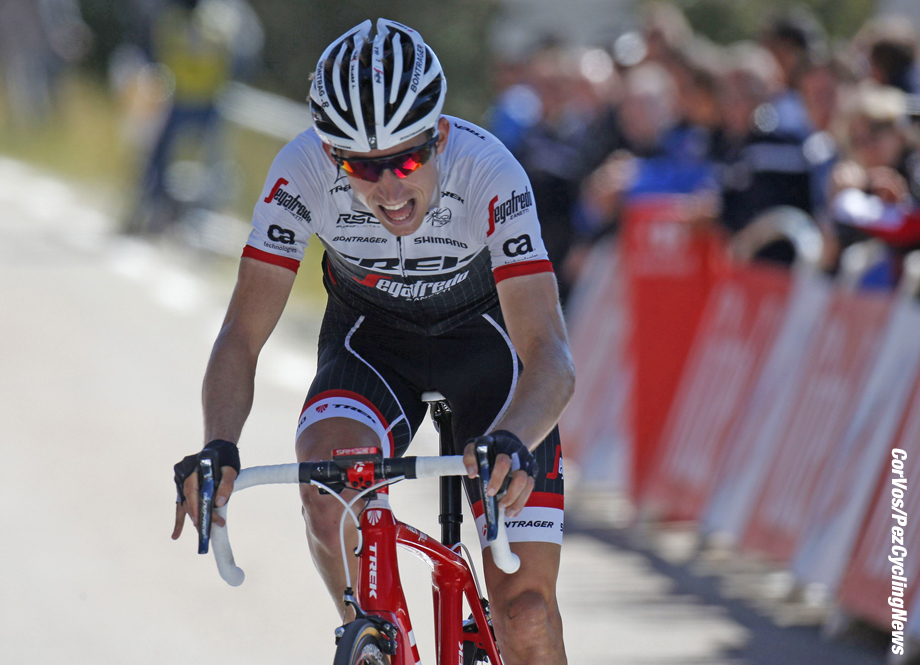 Bauke Mollema could have gained the most from the crash, but… 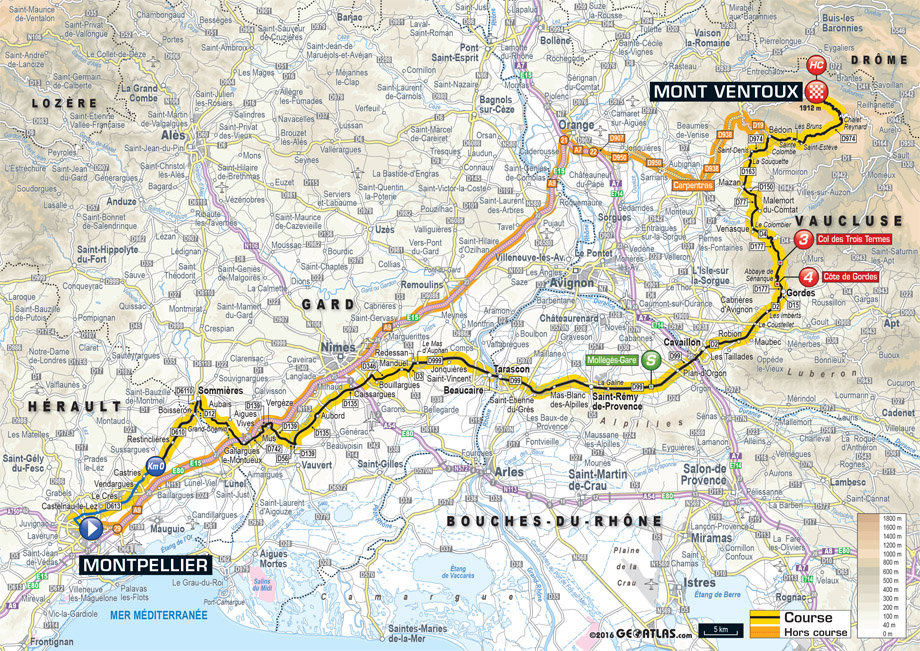