We all dream of what it would be like to be a real-live pro, cruising along the roads of Italy with a police escort, neutral service vehicles and designated feed zones. The Italians call ‘em ‘fondos’ – and forget what you’ve heard about Italian organization – they know how to do it right when it comes to these cyclosportif rides…

PEZ-Man Bob Cullinan actually stumbled across the Medio Fondo ‘Giro di Lombardia’ while in Como Italy to cover the season finale ProTour race of the same name, here’s the story… 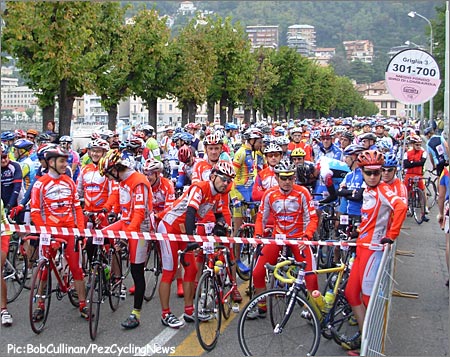 Riding ‘fondos’ in Italy is so popular, you can usually find one every weekend.

This year, the Italian sports daily Gazzetta dello Sport organized 3 of these events (each 110km long) in conjunction with Milan-San Remo, the Giro d’Italia and the Giro di Lombardia, allowing amateur riders to participate in fully-supported, timed rides on the same roads that the pros cover in competition.

– Bob picks up the story –
I’ve got to admit…I had no idea that this was such a big deal. While I was in Italy to cover the Giro did Lombardia for PEZ, I rented a bike so I could get a better look at the sights and cities in and around Lake Como. The morning after the race, on the day that I was scheduled to check-out of my hotel, I noticed more and more cyclists gathering along the lakefront. The day before, Paolo Bettini cried as he rode his bike to victory up this same street…now it was crowded with all shapes and sizes of bike riders. 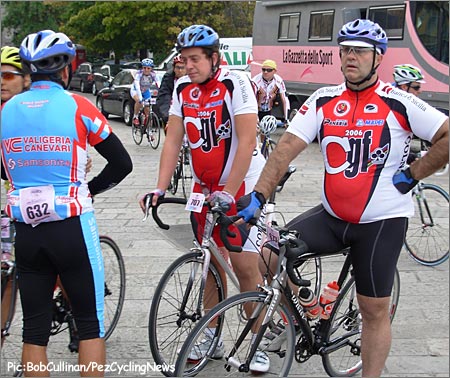 It didn’t take Woodward and Bernstein to figure out that this was something that I should jump into. I found the registration desk for the ride, and in my broken Italian, asked if it was possible to register and ride. I found someone who spoke nearly-perfect English, and as I brandished my press credentials, I asked if I could ride the first part of the fondo (I only had a few hours until my train left for Milan). To my amazement, he was more than accommodating, telling me that my press pass would allow me to get on any part of the course for as long as I wanted. Perfect! 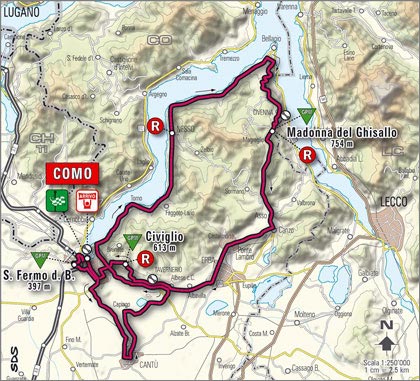 The 110km corsa followed much of the same route as the Giro di Lombardia, including the famous climb to the Madonna del Ghisallo. (Source: Gazetta.it)

Since things were going so well, I decided to press my luck a bit. I asked if there was any swag that goes along with participation in the event. On most rides like this in the US, you’re lucky to get a hat or a dopey t-shirt, but this is Italy…these people know how to do things right! Everyone who rides got a pair of official Gazzetta pink-and-gray bib shorts. Nice! But…they’re all out of my size. Bummer. “Not a problem,” my Italian friend tells me, “we’ll send them to you…give me your address.” 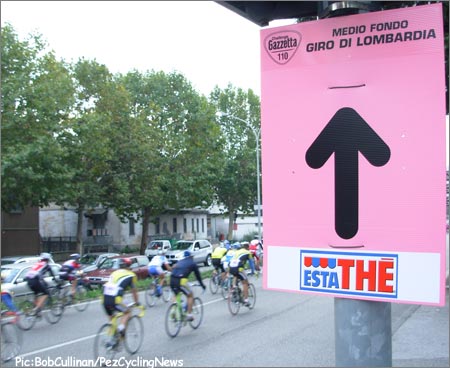 I had just a few minutes to suit-up in my Pez kit and bring the bike down from my hotel room. Out front, there were hundreds and hundreds of cyclists, in all their various team outfits, on all kinds of different equipment. The one uniting factor…everyone here was going to see and feel what it was like to be in the pro peleton in Italy… just at a slightly slower pace, and on a route of “only” 110km, less than half as long as the real Giro di Lombardia.

The day before, the Giro had started in Switzerland, wound its way around Lake Como and then up the classic climb to the church of the Madonna del Ghisallo. Today, the fondo would start in Como, do a 25km loop around the hills of the city, skip Switzerland, then head up toward Bellagio, over the Ghisallo, and follow the route of the race back into Como. I knew I could only do the first hour of the ride, or run the risk of missing my train. But for me, a little fondo was better than no fondo at all. 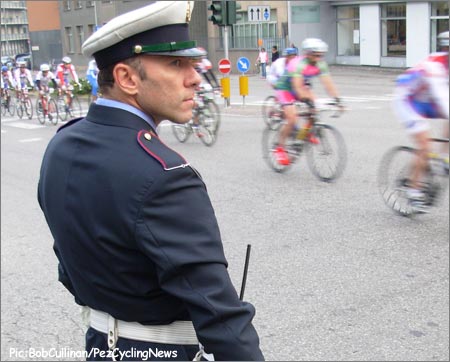 The first thing I noticed… this was not like your typical century ride back here at home. Everyone here took this ride pretty seriously. There wasn’t a lot of humor reflected in the faces of these riders. They were out to see and feel what it was like to ride on a pro tour route.

From the get-go, this was like cycling nirvana. Imagine having no traffic to contend with…every intersection is blocked so you can cross (red lights be damned!)…motorcycle cops are everywhere, to make sure that no stray cars wander on to the course…and if you have a problem on the bike, the Mavic car is not far away.

This ain’t no flat-lander route, but the relaxed attitude of the Italians ensured no one really cared how long it would take. (Source: Gazzetta.it)

As we wound our way through and out of Como, I quickly realized that although many of these cyclists looked tough and determined, most were average jabloney like me. You don’t worry about getting dropped, because while the first few dozen riders want to hammer the course and ride a fast time, most of the peleton was out to test themselves at a much more pedestrian pace. These people seemed to take the sport pretty seriously…after all, cycling is a much more passionate pursuit in Italy that it is back here…but it felt like these folks were focused on “the moment.” A day before, their heroes were competing on these very same roads, so they wanted to, as much as possible, experience the same course and the same climbs as the pros. 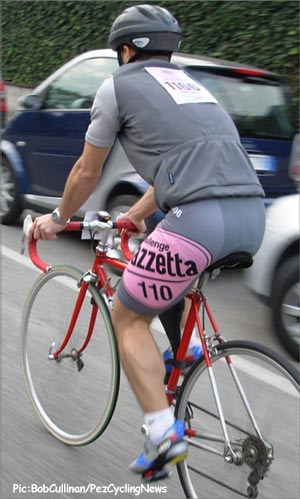 It was truly a once-in-a-lifetime experience. Imagine going full-tilt through the small towns and villages of northern Italy, cheered-on by the local spectators, on a warm Sunday in Lombardia. It can not get much better than this. 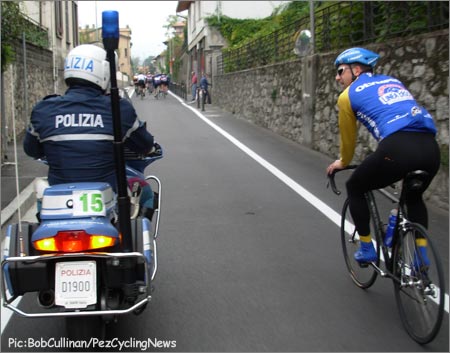 You want a police escort? No problem.

It very well may have been one of the best rides of my life. I’m usually a semi-chicken on most descents, but for some reason, I was just flying down the hills as we approached Como. In my own mind, I was Paolo Bettini. He had risked life and limb as he cut the corners and hammered through the hairpins of the closing miles in the Giro di Lombardia less than 24 hours earlier. I had watched Bettini’s inspiring ride on television, and now, here I was…on the same roads, with the same freedom to fly. I somehow felt the spirit of Bettini, and letting go of my usual downhill trepidation, I was semi-fearless on the descents. 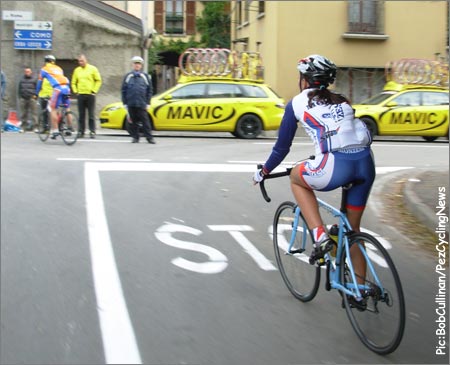 As the hills flattened out, and the fondo got closer and closer to the center of Como, it really felt like the final few kilometers of big-time pro ride. And knowing that my abbreviated fondo would soon end, while everyone else still had to go up and over the Ghisallo, I let it all hang out. Sprinting down the straight streets, I probably hit a max of 35mph, but to me it felt like the all-out charge of a Boonen vs. McEwen match up.

With my hotel in sight, I reluctantly turned off the course, and watched as the rest of the cyclists headed north to complete their ride. My foreshortened fondo was fantastic. The next time I get a chance like this, I’ll make sure to block-out enough time to complete the entire route.

If you ever get the opportunity, you should do the same. It could be the ride of your life. 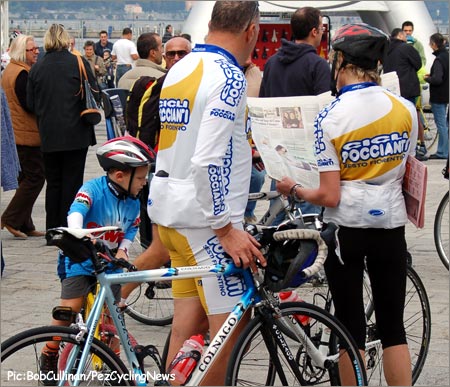 Any place where cycling is a ‘family sport’ is pretty cool in our books.