The French Alpine village of Gap has often been the scene of many famous Tour stages, but on Tuesday it hosts the second rest day. With an amazing network of roads and climbs all around Gap it’s a perfect place for some serious climbing and to discover the superb scenery as Chris Selden recently found out.

Every year my amateur team of cycling misfits, Team Baudille Cyclisme take to the mountains of France for some serious climbing packed into 2 or 3 days of intensive riding. Guided by our Director Jacques the weekends tend to be survival affairs as he always manages to find the best riding in any region but the routes are never for the faint hearted. 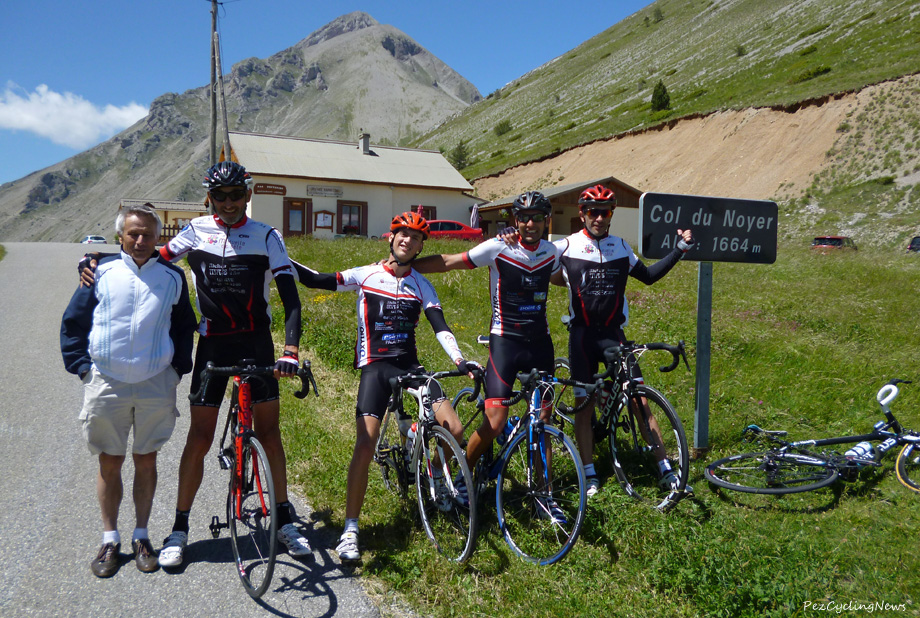 If there’s a back road to be taken, Jacques knows it – just as he seems to know every little known mountain that there is in all of France. The man is an encyclopedia of superb riding in France so let me take you into Jacques’ latest torture efforts of three spectacular but extremely difficult rides around Gap. 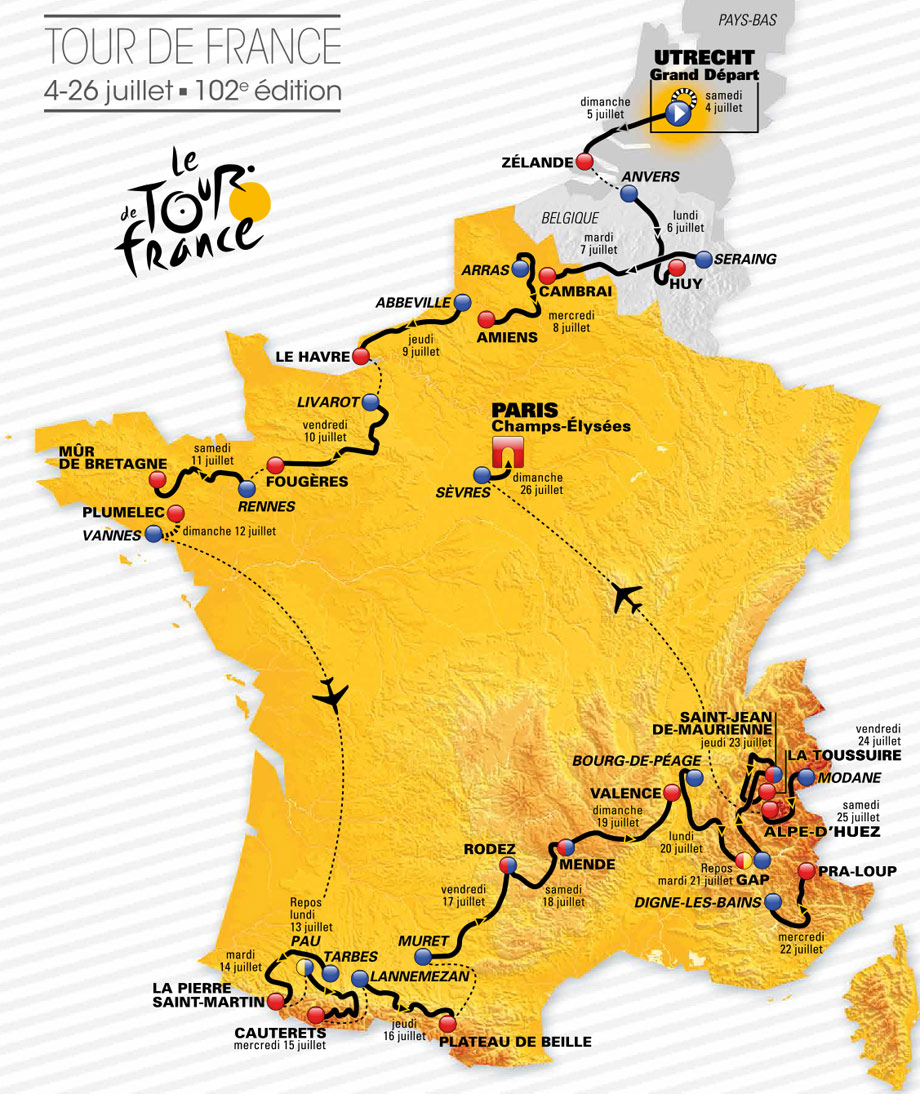 Day 1
With a population of 40,000 people Gap is a big Alpine town with all the amenities needed but is still easy to get in and out of on the bike. There’s a series of larger National roads that quickly get you into the countryside and despite the regular traffic on them they are wide roads and often have smooth bike lanes on the side. For this first day of riding we headed South on the National in the direction of the Col du Vilar. 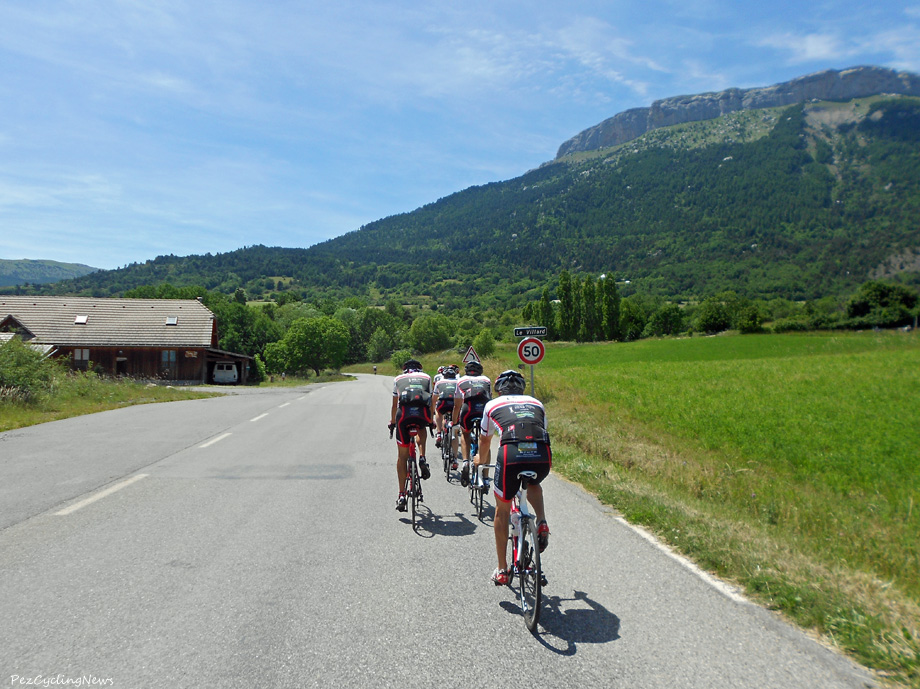 This was a perfect start to the ride with great scenery and although the climb is a medium length of just over 8km, the steady 3.5% gradient and fresh legs meant our mismatched bunch of riders that ranged from 19 to 50 year olds and from high to low category racers stayed all together…..for the moment at any rate!

An easy warmup day spin of around 80km was on the schedule but as anyone who has ridden in the French Alps will know – there are not too many easy kilometers to be had. In fact the ride ended up being almost 100km long after Jacques decided to add in a ‘bonus’ 1st Category climb for us as from his seat in the Skoda follow car it looked like we were doing it too easy. 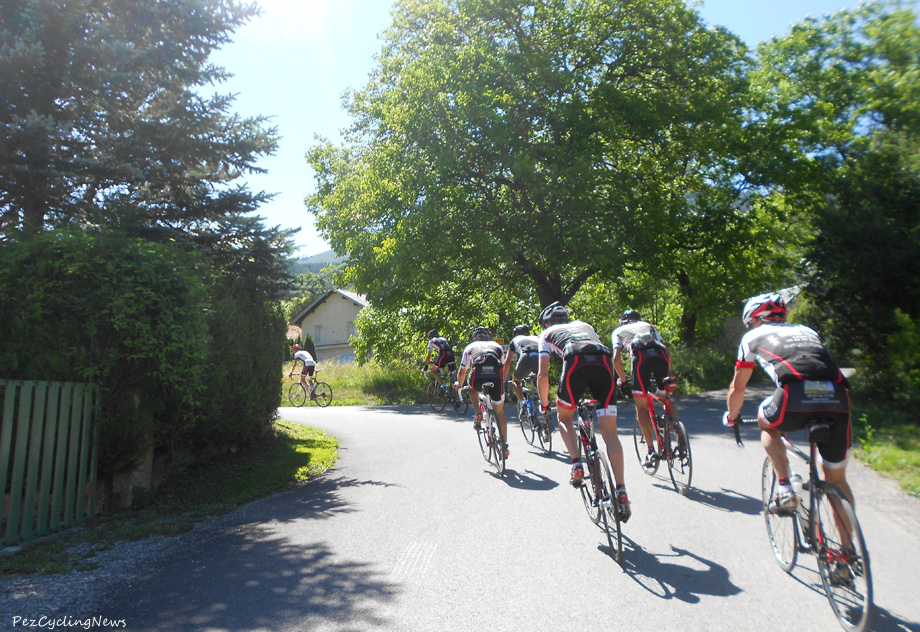 The group staying together quickly changed when Jacques took us off onto the smaller roads and up the little known Col d’Espréaux. The gradients quickly sorted the men from the boys – with me being firmly in the boys category after being sick all week and bed bound before coming on the training camp. 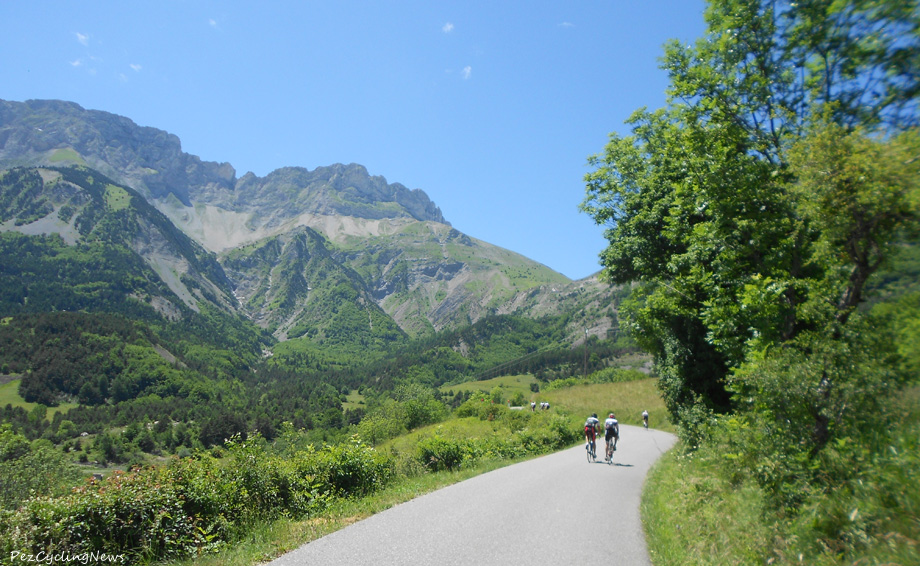 Dropped! But what a view…

Luckily for me I had our sprinter Marc for company and we took in the views and shared our pain during many kilometers of climbing. 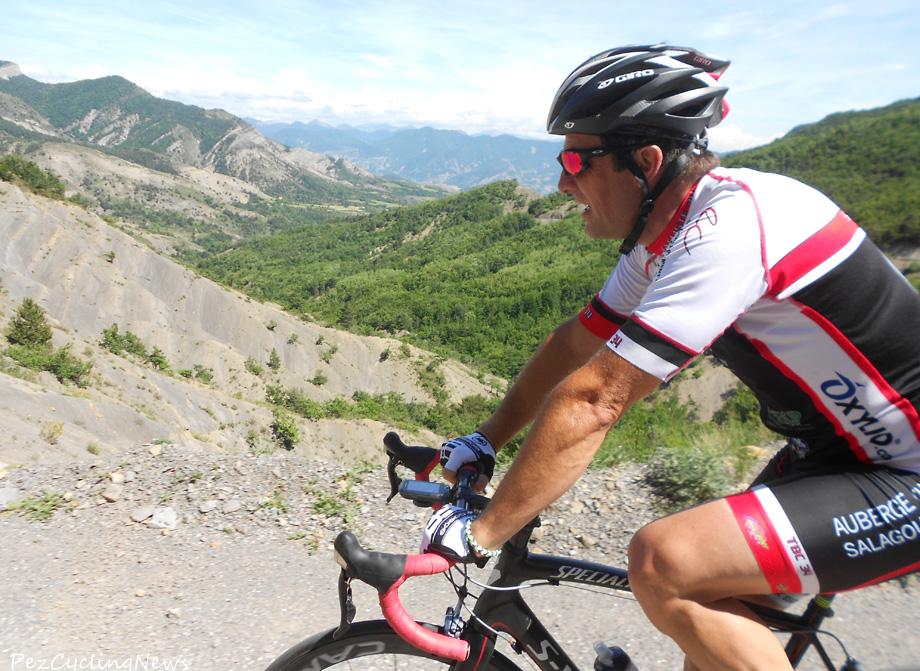 The summit finally arrived on this second of our warmup climbs and I was already dreading what the ‘real’ climbs would have in store for us. They may not have the reputations of the famous Alpine climbs of Alpe d’huez, Col du Glandon, Galibier etc but these smaller climbs are formidable beasts and well worth a look – especially if you love small, seemingly lost backroads with amazing scenery. To check out what we did on Day 1 you can see it here on Strava. 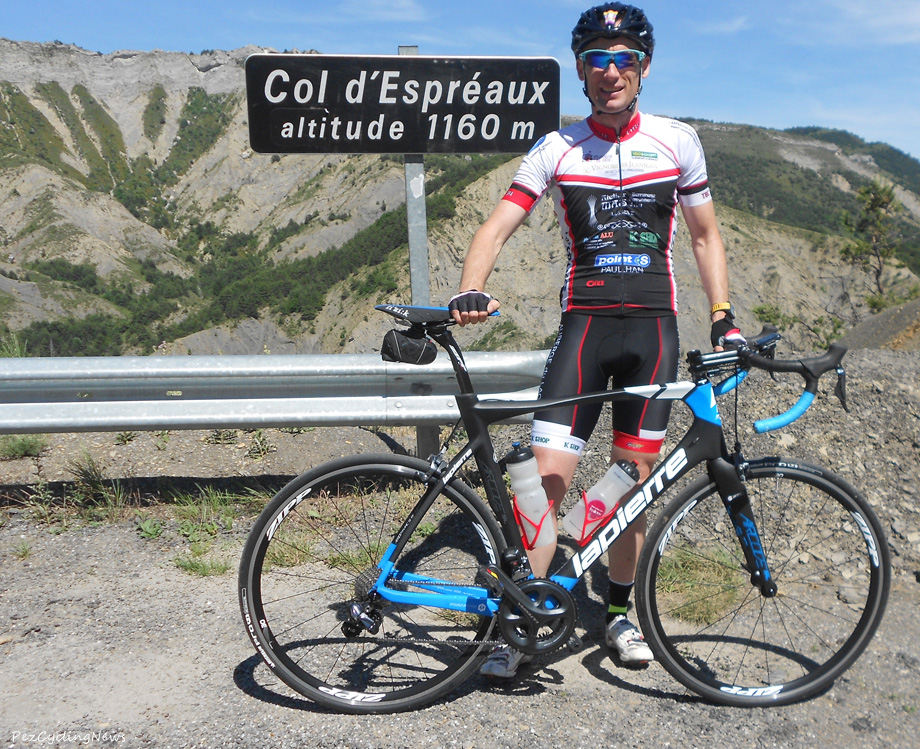 Me at the summit of the Espréaux with the bike I had on test at the time, a 2016 Lapierre Aircode SL. It was delivered the day before this training camp so what better way to test a new bike from a famous French company than 100km in the French Alps?

After regrouping at the summit with the others and continuing to be blown away by the scenery Jacques pulled his little trick of ‘let’s add a 1st category climb to the itinerary and not say anything’ for us. This particular climb was the Montée de Céuze, 7.5kms long at 8% average gradient and was certainly a nasty surprise for me as I thought that we’d almost made it back to the hotel….

Day 2
After the warmup of the previous day, Day Two was about the serious climbing with over 3000m of elevation gain in just over 130km of riding on the itinerary. Amongst the climbs on offer was the Col du Noyer, a seriously steep in places Cat1/HC climb that has been featured in the Tour de France on 4 occasions since 1970 with the most recent one being in 2010.

Before the Noyer though there was of course more climbing to be done starting with the Col de Mossiére. 9kms at 8% gradient is difficult in anyone’s language but still feeling the affects of a bad flu and the 100km from the previous day my body was crying out for rest. Thankfully the weather was perfect though, the scenery superb and the grupetto big enough and still in good enough spirits to enjoy it all to the maximum. 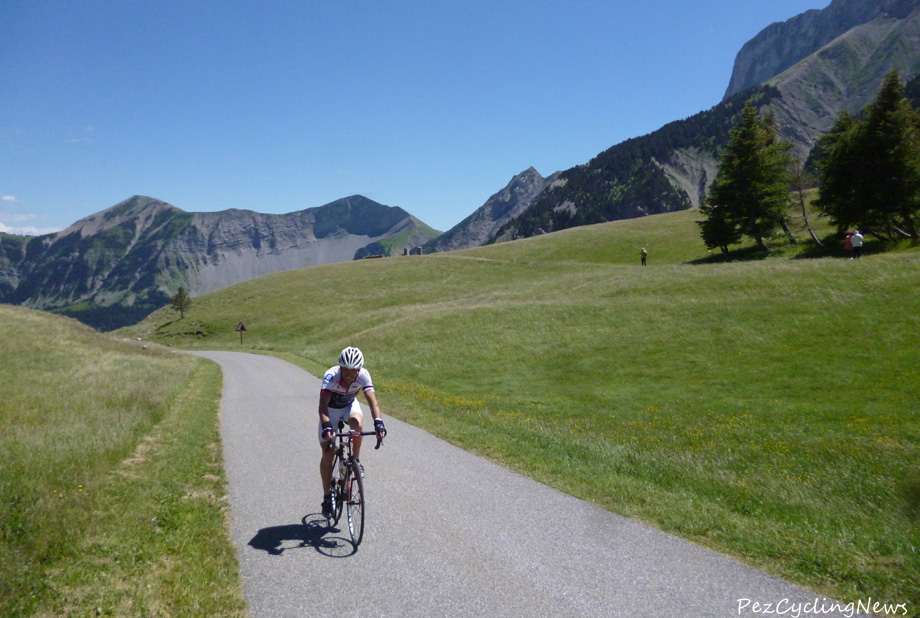 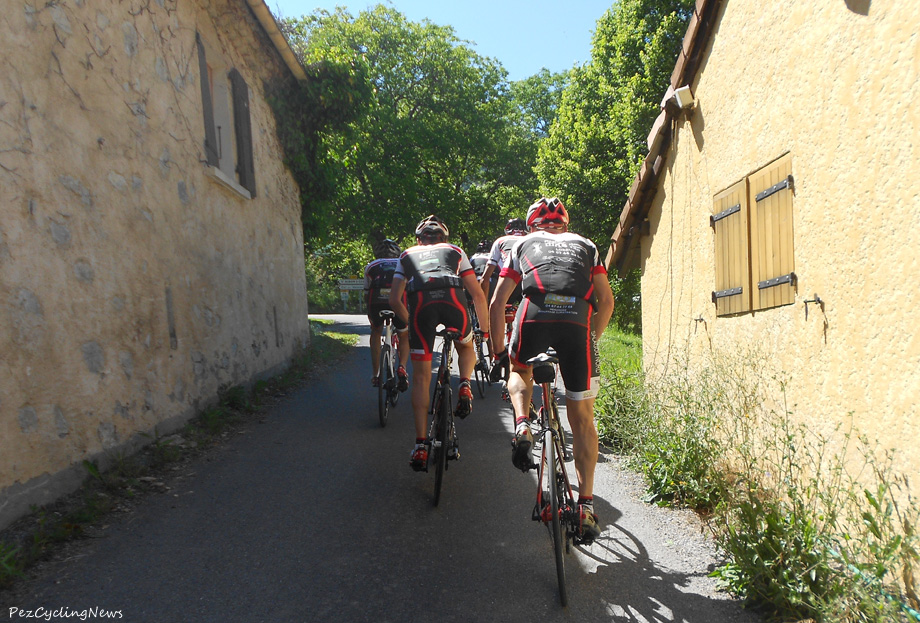 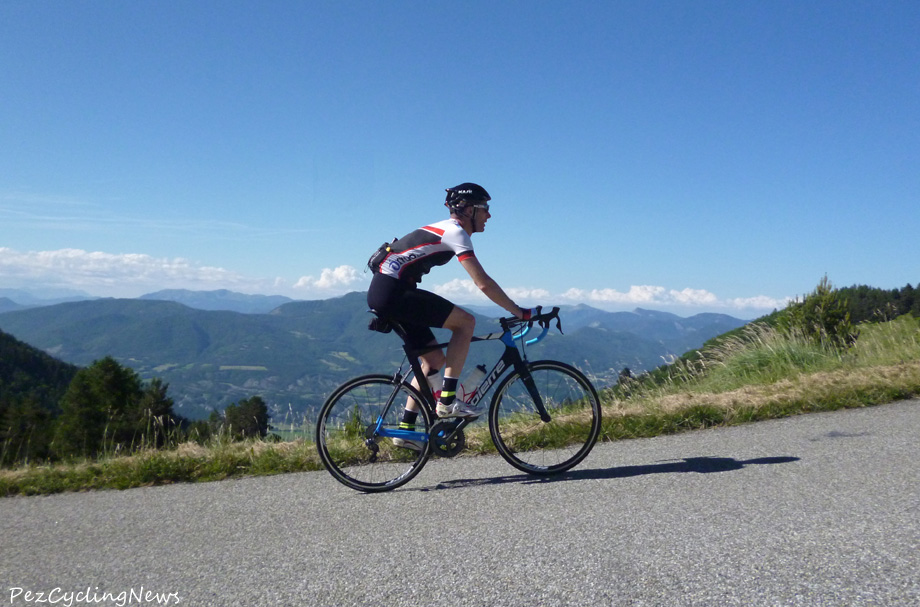 Me climbing the Mossiére. Despite still feeling sick from the flu, I actually felt really comfortable on the bike. The Aircode is designed to be aerodynamic and a speed machine on the flats and I had reservations about taking it on this camp – unfounded though as it proved to be a superb climbing machine – and even better descending one on these extremely fun roads. 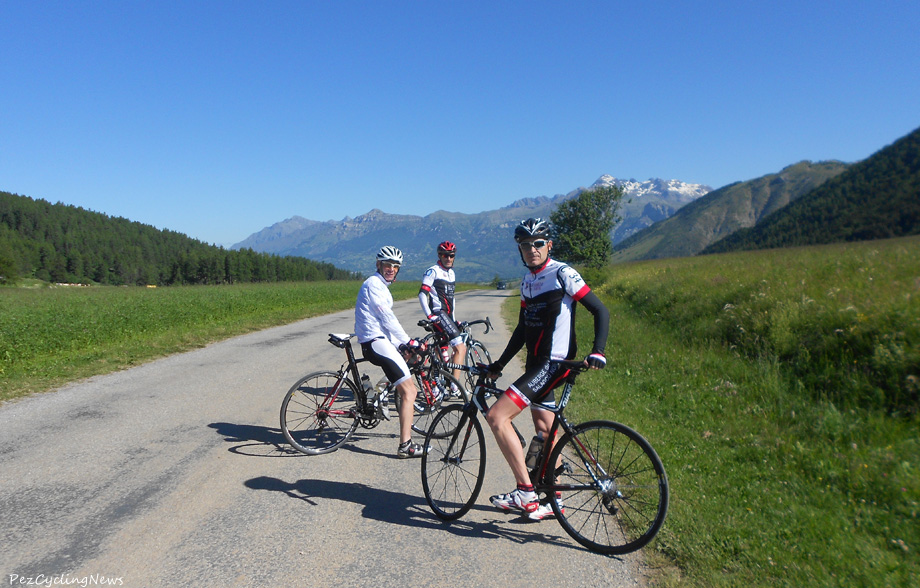 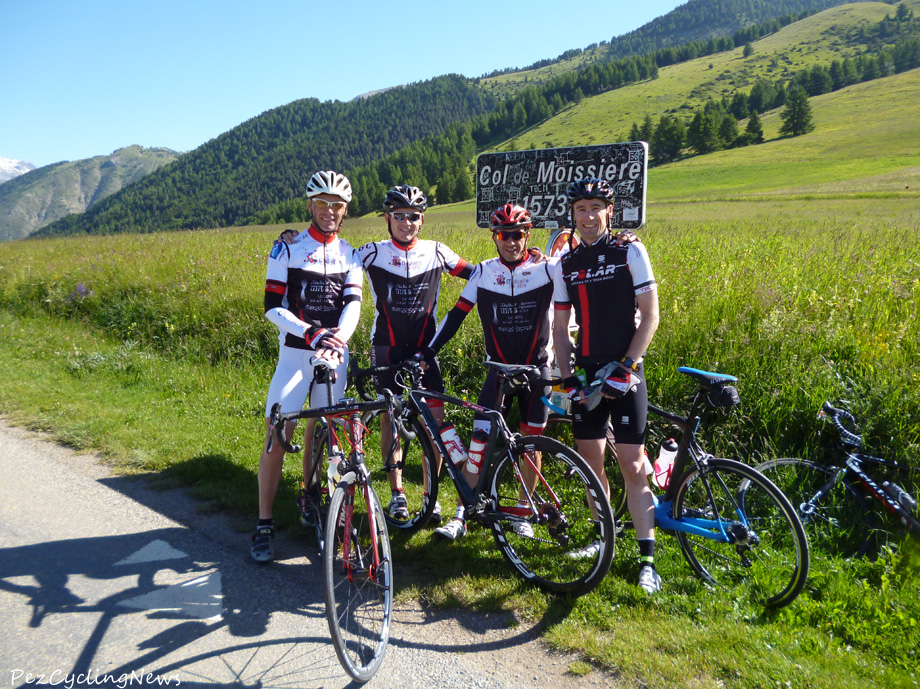 Finally the summit – only four more Cols to go…

What goes up must come down and for me the descents were certainly the highlights of this trip. The roads we were on had very little traffic and were in general well paved so that combined with a bike that just wanted to go fast had me flying down the descents with a smile a mile wide on my face. 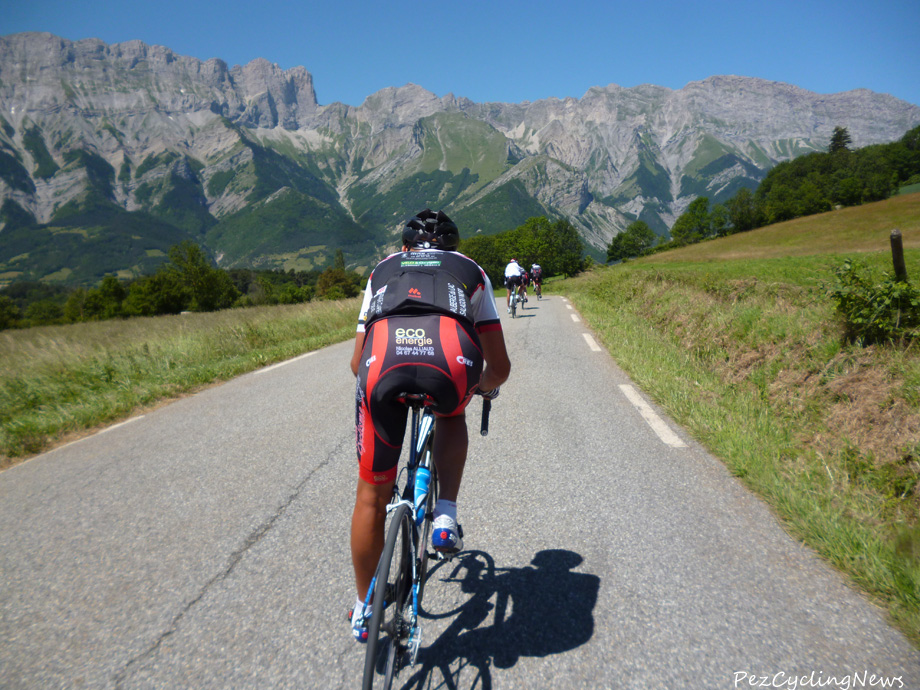 The Col du Noyer with its sections of double digit percentages was next on the menu and its heart breaking switchbacks tried hard to get the smile off my face but without success. Yes, I was sick, dropped and struggling big time but what a beautiful climb! 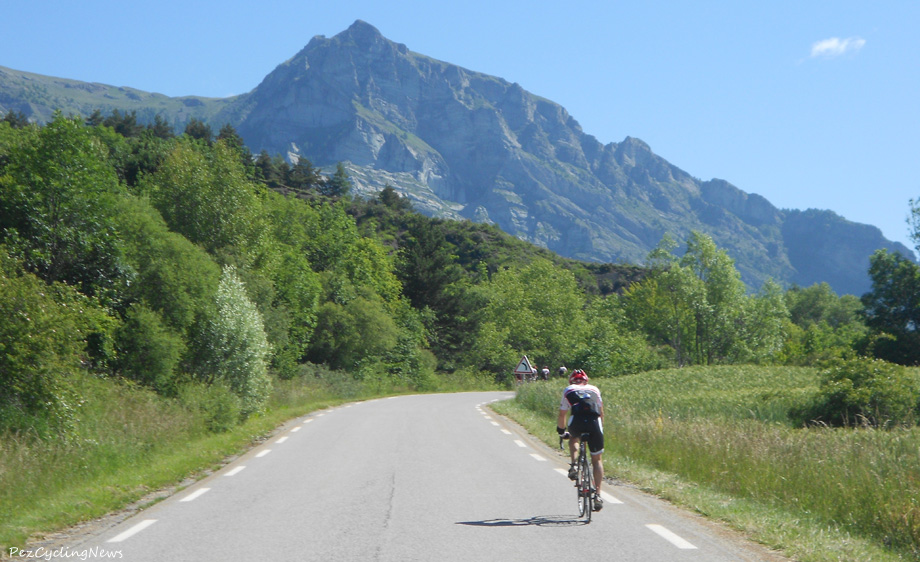 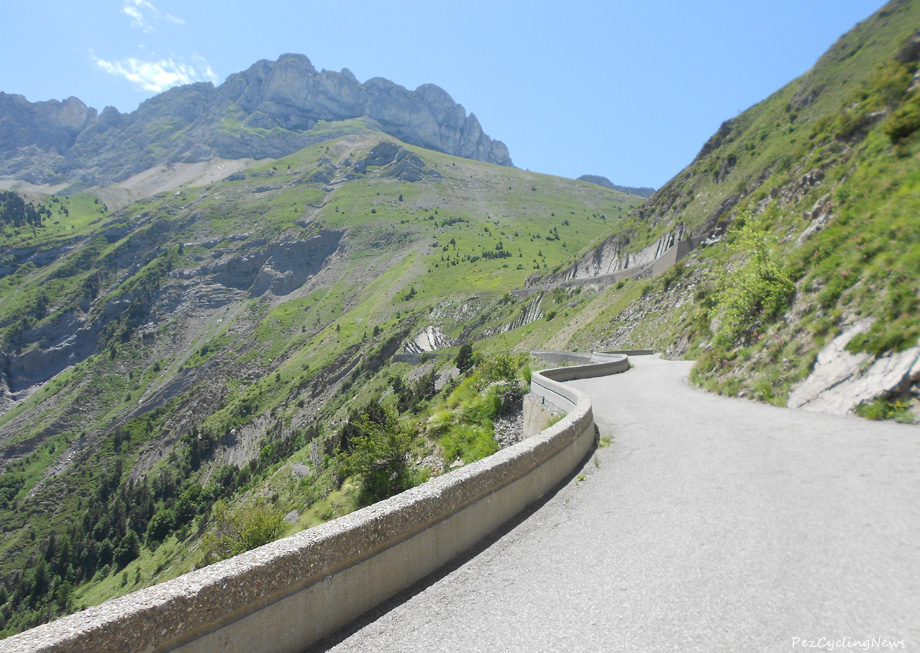 The last kilometer of the Col du Noyer. It’s a lot more difficult than what it looks like in this photo, trust me. 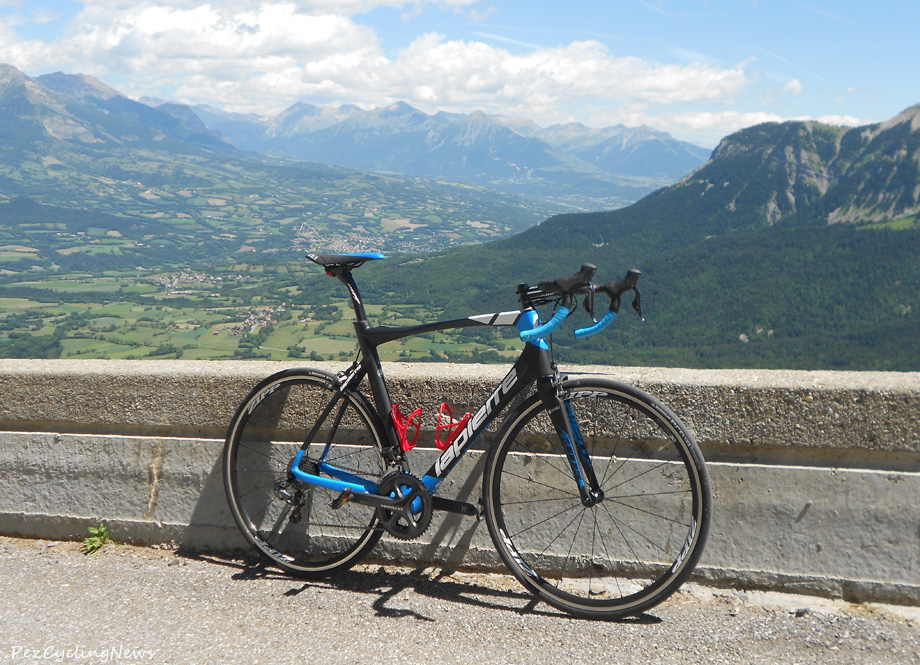 My bike enjoying the views from the summit – I was sitting down quietly dying.

Day 3
Day three saw the group depleted in numbers after our strong climber Cédric fell on a descent the previous day and broke his collarbone. Despite the team car being there to take him to hospital he instead remounted and rode the 35km back to Gap. Brave, crazy or stupid? Probably a bit of all 3 which is what the rest of the team would need to be to complete this third and final day of climbing on offer. 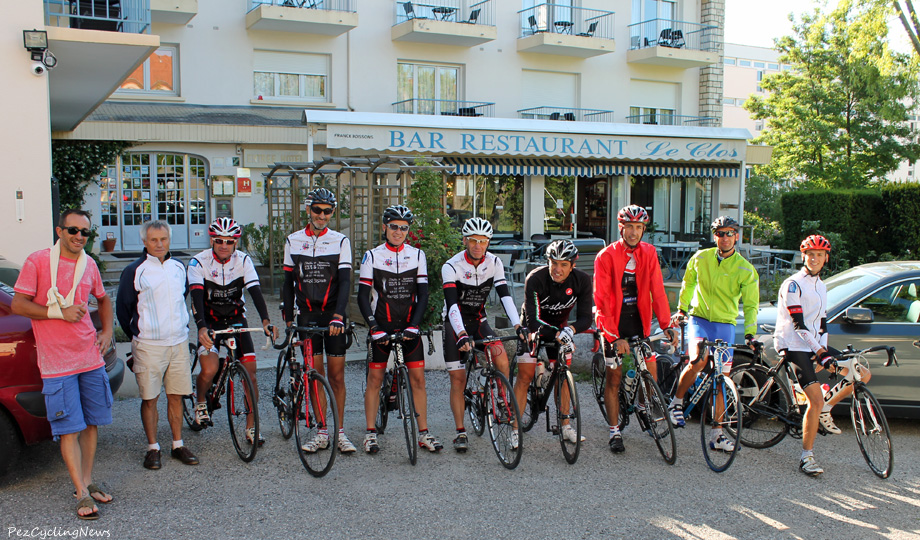 Numbers down but spirits still high at departure time on Day 3.

Once again Jacques had some big climbing lined up with this being the final day he’d saved the best for last with the unmissable if you’re in the region, Mont Colombis. This is the big one and it easily rivals the likes of Alpe d’Huez with its 12km and 8.8% average gradient. Thankfully there was a short warmup climb or two before for us though where we could once again enjoy the scenery and try to forget about our aching legs. 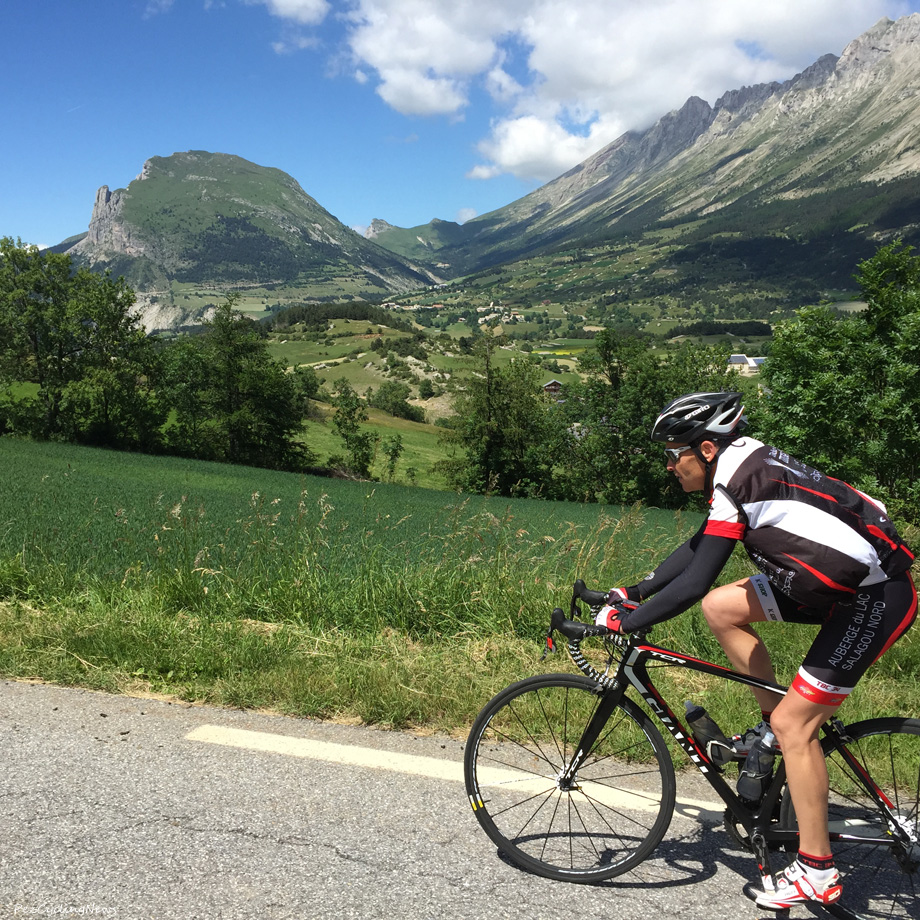 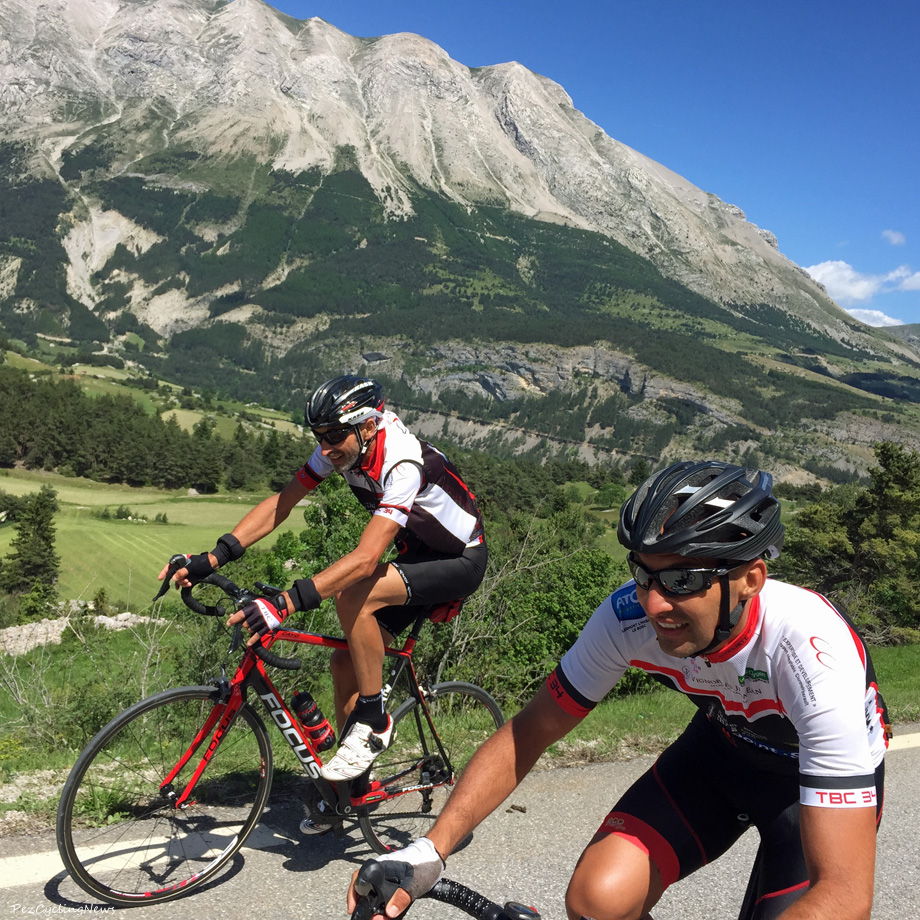 Then it was on to the Mont Colombis. Helpfully the government in Gap has signposted all the local climbs (even the small ones we did) with markers every kilometer telling you; the name of the climb you are on and its altitude at the summit, how many kilometers you have to go until the summit, your current altitude and finally, the most important info – the average gradient of the next kilometer. 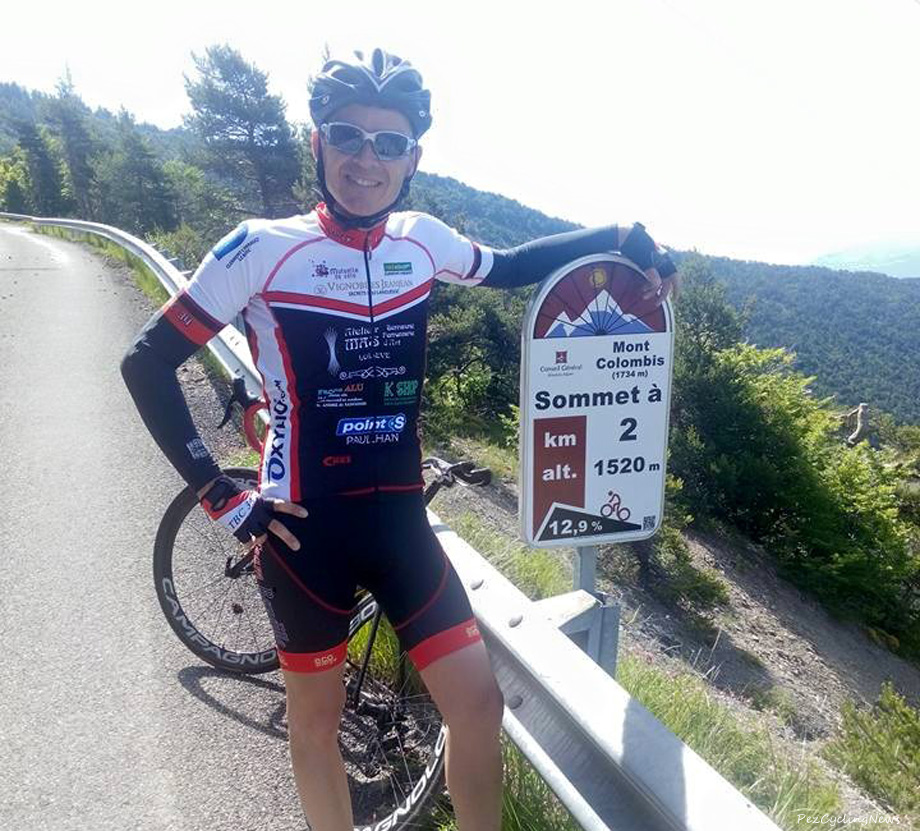 Our Club President Nicolas managing to smile at the pain. 2km to go on Mont Colombis, current altitude 1520m and a leg sapping 12.9% average gradient for the next kilometer. 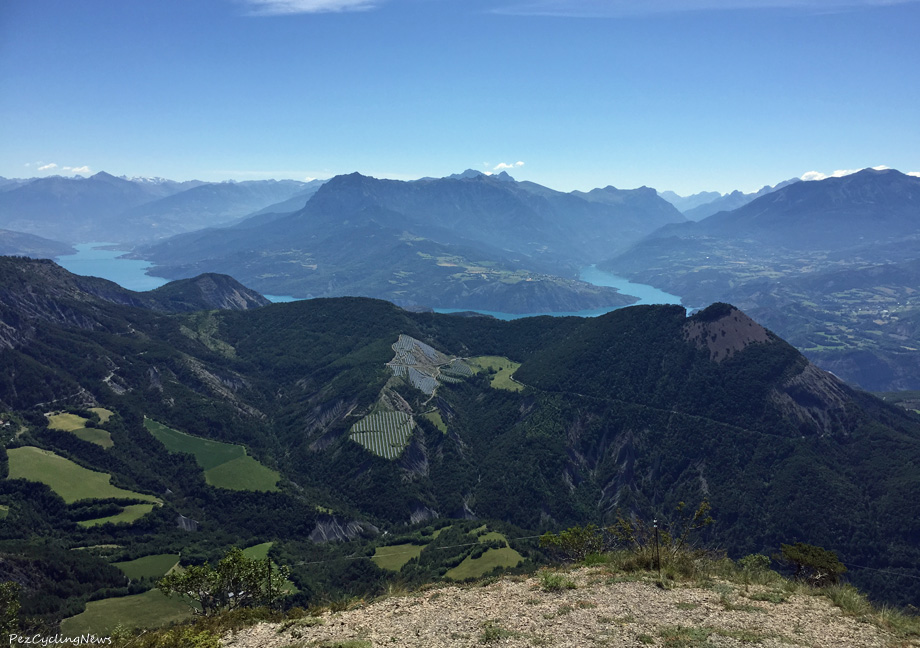 The well deserved view from the summit

Unfortunately logistical problems from the narrow roads and the fact that Mont Colombis is a dead end has meant that the Tour de France has never visited the mountain and that is a true shame as it is a classic of the region and is not to be missed. There have been petitions by numerous officials to try and change that though and claim Mont Colombis as a stage finish but for the moment it is one of those climbs that is yet another hidden gem of the area.

If you’re into climbing, amazing scenery, great roads and seemingly endless options of riding then Gap could certainly be the place for you. We stayed at the Hotel Le Clos as did Lotto Soudal during the recent Dauphiné race and they’re well set up to receive bike riders but there are also many other accomodation options in the region. The only thing Gap is missing is an airport for easy access with the train or car being your best bet.

For me Gap is certainly full of great memories from this weekend and with yet another Jacques training camp in the legs thoughts are already wondering ahead to next year’s camp. With the Massif Central, Pyrenees and now the Southern Alps covered in the last three years what will Jacques find next?