Former CSC pro Andrea Peron is on the adventure of his life – riding a mountain bike across Argentina and Chile in a full blown effort to slow down and smell the daisies. With only himself and a riding buddy for support, he’s still managing to send out dispatches from his journey – here’s the latest.

Dispatch #2
– Puerto Natales – 3 days after our departure for the adventour trip from El Calafate and the environment has changed already so many times: we left the lakes and the glaciers of El Calafate behind and we rode for about 150 miles in the rock desert where everything is red/brown colored with the only exception of the Andes range running along on our right side while we move south. 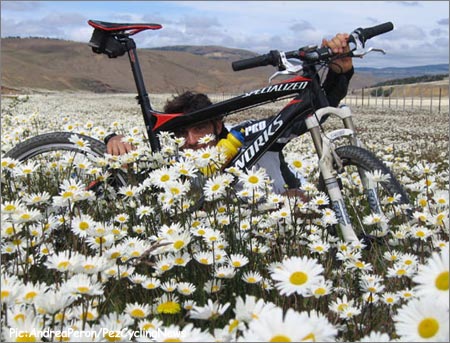 Four Strong Winds
One thing for sure is not missing, and it is the wind. Amazingly strong: and I mean STRONG: it can blow at 50/60 or even 70 miles per hour, and that is something that scared the sh*t out of me, even if I think I could handle the situation thanks to may pro-ride skills. A couple of times I almost got blown away in the crosswind. Thanks to the wind direction, though, that normally blows from North or NorthWest, we get pretty much a tail wind all the time, and very seldom a head or cross wind. And if we chose to do the trip in this direction is for a meaning: going from Usuhaia north, it would have taken us twice as long. Sometimes I found myself forcing to break into the wind as hard as I could, and only moving 4 miles/hour: I guess I beat all of my record of ‘slowlyness’ (not even on the Mortirolo I was pedaling that slow!). Of course with tail wind I got to reach easily 50 M/hr!!!! 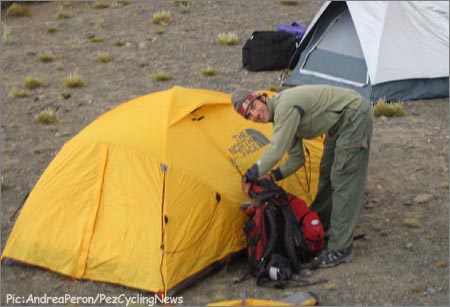 A faceless hotel enroute to another stage race it ain’t…

If I have to pick the image of these days, so far, I would choose a daisy field that opened up in front of my eyes after I reached the top of a small climb. Standing in from of me I had a valley miles and miles long fully covered by daisies: the flowers covered the whole canyon and the hills beside it: it looked like it recently snowed. 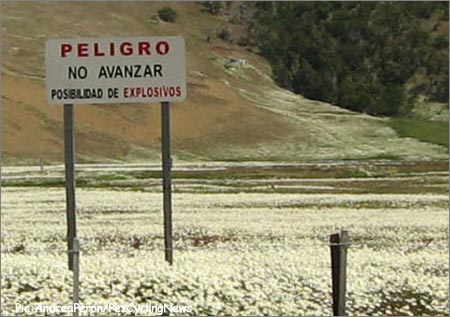 A field full of land mines should be enough to deter any would-be dasiy-pickers.

One thing shocked me as much as this beauty: except for the first couple hundred yards where I could step in the field, the rest was all fenced with big sign “STAY OUT DANGER OF EXPLOSIONS” as you can see in the
picture. The all ground is still full of mines bombs left from the all war between Argentina and Chile for the “Yelo Patagonico Sur”, a war in the past century where Chile was trying to gain more of this rich subsoil land from Argentina. What a contrast: such beautiful flowers hiding such a terrific bomb weapons underneath. So don’t pick the daisies!!!! 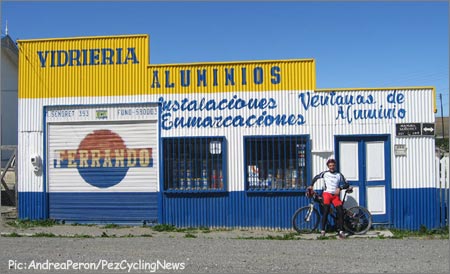 I’m already over the half of my trip and I entered back into Argentina today, after pedaling five days in Chile. I had an amazing tracking day in Tores Del Paine; from my alpine climbing background, I always was in love with these mountains; since I was a kid I read about the stories of the first Italians trying to climb them, and they achieved it in the 1960’s, Monzino was the first man on the top. Than he liked the place so much that he bought the whole area, to preserve it and created a wilderness park. After he died, he donated all the park area back to Chile, which turned the place into the Torres Del Paine National Park. 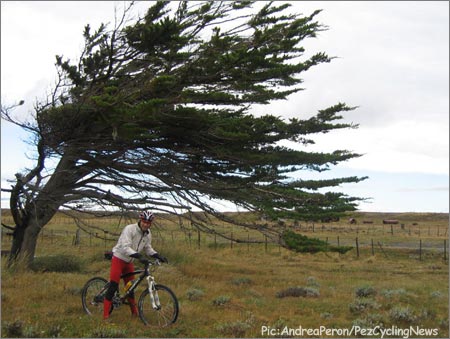 As every day happened so far, the sights change so fast, so, after leaving Puerto Natals; now the rock desert left the place to the green hills covered with old “lenga” trees: hundred year old trees similar to the ones that grows in the canyonlands and mountains of the US SouthWest of US. And they are the visible signs of how much the wind blows over here: they grow all tilted as the wind blows, and since the wind comes always from the same direction, they get a very funny shape. 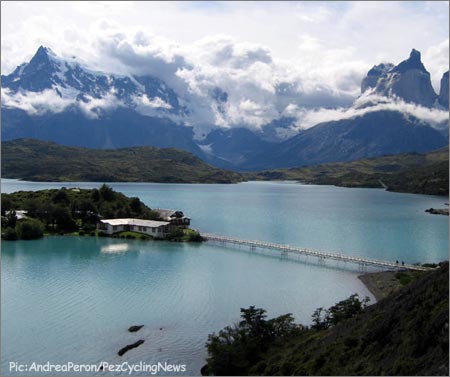 Yesterday I officially entered the Terra Del Fuego, “the last and southernmost land of the planet” from Porvenir, is a much rougher environment, where everything struggles and fights harder to beat the adverse climate. I pedaled for more the 50 miles along the south side of the Magellan Channel and camped somewhere near a little village called Onaisis. Some abandoned tanks and a military base still reminded me how fresh was the dispute between Argentina and Chile about the control of the channel. 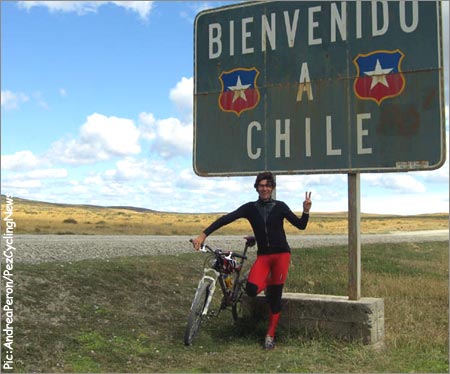 Yesterday, as well, on the road we met a Dutch guy, Peter Glabeek, who is doing way more than what we do: he is biking from Ushuaia all the way to Alaska. He is planning to arrive there in summer 2008! He is not new to this: in 2005 he pedaled from Holland, all the way to Australia, passing through Europe, Turkey, Iran, Pakistan, Nepal, Tibet, Laos, Cambodja and Australia. Quite impressive!

Go check him out at [email protected]
Way to go Peter!