It’s not uncommon for aging pro racers to put off retirement for another year or few because they just don’t know what to do next. Recently retired ex-CSC pro Andrea Peron is still riding his bike, but this time it’s a solo epic from the southern tip of Argentina, taking him 700 miles north. He plans to see a lot more than just a wheel in front of him, and he sent us this dispatch.

Here I am sitting in a cafe in the deep south desert of Patagonia, facing some beautiful glacier reflected in the Lago Argentino. Ready to start a totally new adventure of my new life as a retired pro cyclist. After having been around the world racing as fast as I can, now I take my chance for a totally different lifestyle. I’ve been an adventourist all of my life, otherwise I wouldn’t have chosen to be a bike rider: the bicycle was my tool to run free and discover the world, the racing world so far. 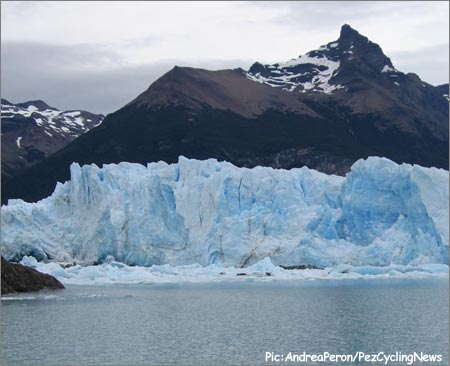 We’re not in the Dolomites any more Toto… This is Patagonia – about as far south on the planet as any landlubber would dare to go.

Now the same bicycle is going to be my new toy to discover a different world and a different way of pedaling. If before I was pedaling surrounded by people along the side of the roads, now in the next weeks I will pedal only hearing the wind blowing in my ears and probably seen only a number of persons daily, that I can count on my left hand. Until now I was pedaling trying as much to concentrate on my effort, and sometimes I did not even have the time to look around to see the landscape, now the main line of my trips will be exactly the opposite: fill up my eyes and soul with the breathtaking beauty of he world I’m going through and the people I’m going to meet along the roads.

I arrived here yesterday for a big adventurous trip that will lead me from this town at the farthermost town on the south hemisphere: Ushuaia using my mountainbike. 700 miles through the most beautiful, breathtaking and lonely landscape that someone can find. For anyone that knows Bruce Chatwin’s book “In Patagonia” probably knows what I’m talking about. One of the greatest place where the wilderness is still the boss. A land where, glaciers run into the oceans and into the lakes, after winding around some incredibly shaped steep mountain called Cerros, the most famous ones are Cerro Torre, Cerro Fitz Roy. 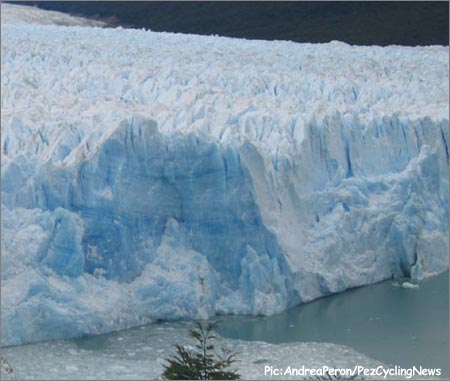 Today just to catch up from the jet lag I went to take a look at the incredible Perito Moreno: “little beast” glacier that like a snake comes down from the Andes for more than 200 miles, to fall down in the Lago Argentino lake with a mass of ice 150 feet high. And looking at it braking and dropping huge ice chops off its mass into the lake, is the most astonishing thing to watch: the noise it makes, you can compare it to a blast of a bomb going off. The size of the ice falling sometimes is bigger then a 3 story building: you can just spend hours hypnotized there, watching the colors changing and looking at this huge thing moving!

I’ll bet Andrea feels a long way from his retirement dinner in Northern California, but at least he has memories like this to keep him warm on those cold, lonely nights in the Argentinian outback…

Tomorrow the trip will start with a “easy spin” of 95 miles from El Calafate to somewhere in the desert, because the next close town is more than 200miles away and even as a good ex pro rider, I can not do it in one day, so we’re gonna stop along the route and camp in the middle of nowhere.

PEZ Jerseys: Even Better Than Plastic!