Planning your own trip to the Tour de France doesn’t have to complicated. That’s the premise behind Velotainment.com’s Self-Guided Tour de France 2005. The brainchild of Velotainment.com founder and PCN contributor Ted Arnold, the guide is for folks who want to create their own trip rather than go with a traditional tour group. Arnold sent us a copy so we could leak a sneak peak.

Having seen the Tour & Giro several times myself, both with tour groups and on my own, I was keen to see if Ted covered off the stuff I’ve learned through years of trial and error. After a read of the guide, I’d say it’s too bad I didn’t have this in my early days of Tour-chasing. 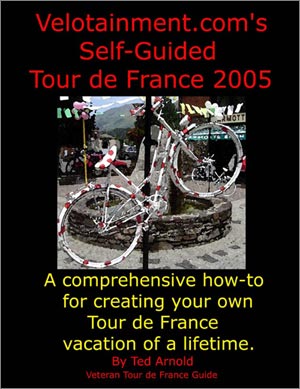 WHAT IS IT GOOD FOR?
This guide is perfect for a bunch of travelers: those who want a bit more independence in their Tour watching vacation, those who want to supplement the info provided by another tour provider, and it’s even useful for people who’ve never been to France before to see the race. As long as you’re up for adventure – and what TDF isn’t a huge adventure – there’s enough info here to maximize your time on the cols and minimize your time dealing with … well… France. Okay – I admit – France is great – you just gotta know what to expect – and this Guide provides what you need to know.

Seeing the Tour first-hand has become way more popular amongst us North Americans in recent years, and with the number of Tour operators springing up to take us there it’s a good sign that most of us aren’t quite ready to jump in feet first and figure it out on our own.

The first thing about this guide is it’s credibility – Ted has been to the last 5 Tours and has worked as a guide at 3 of them. He knows of which he writes.

Ted was asked by friends and acquaintances to help them plan their own Tour trips. As more plea’s for help came his way, he decided to write the how-to guide.

“It all just sort of snowballed and the more I helped, the more people asked of me—I knew the guide couldn’t be written for everyone as some people want and need the full time guidance a good tour company offers, but there are a large number capable enough to plan their own trips and judging from what I could find, the self-planners had very limited resources to help them,” commented Arnold. 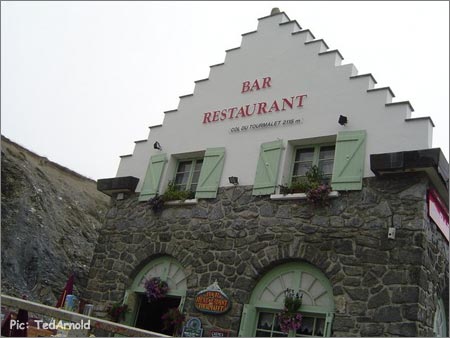 Climb all the way to the top of the vaunted Tourmalet and this is what you’ll find. The bar has a nice collection of TdF memorabilia and across the street is a monument and statue to Jacques Goddett. Though left off the 2005 route the Tourmalet is still an attainable riding goal when the Tour has a rest day in Pau.

LOGICAL LOGISTICS
The guide book is broken down into two key sections to help separate the planning phases of the trip. Section one gets you started by telling you how to handle the numerous logistical intricacies like criteria for choosing lodging (hotels, camping, RV’s) to food considerations, ride planning, and driving issues. Mixing the perspective of guide, Tour traveler, and cyclist, Arnold does an impressive job of giving a realistic outline of everything you need to hit the ground running.

“In the past I’ve followed the race a lot of different ways. I don’t want the guide to come off as just a budget-minded way to do things—I’ve slept on the side of the road while on my own trip but I’ve also stayed in best hotels while guiding so I hope that level of experience is invaluable to the reader,” said Arnold. 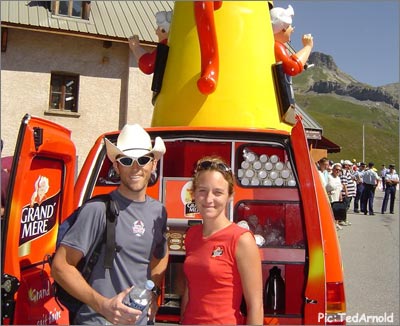 After a long day in the saddle Ted Arnold relaxes atop the Col du Lautaret with a cup of complimentary Grand Mere Cafй – the captive roadside audience is a promotional paradise for TDF sponsors.

SUGGESTED ITINERARIES
Perhaps the best feature of the Guide, especially for those who’ve been before and need to figure out the day’s stage route, is Section two, which gives you suggested itineraries for all three week’s stages of the 2005 Tour de France with consideration given for both aggressive and casual race followers. The carefully laid out details follow the Le Tour’s built in rest days but allow travelers to pick-up the itineraries on any day they want to arrive to start their trip. At the same time the guide also shows you how to miss as few stages as possible while targeting key “can’t miss stages” such as Stages 14 & 15 in the Pyrenees.

A daily stage-by-stage breakdown is a key part of the itineraries usefulness and shares nuggets like alternate roads and viewing spots for each day’s action, plus the best cities to use for lodging.

Check out this excerpt for Stage 9 to get a sample:
Tomorrow is a rest day so give today’s stage a full effort. On paper this stage will signal the beginning of the true racing action in the Tour. Covering 6 smaller rated climbs, this won’t be a day for pure climbers but difficult nonetheless.

Though there are multiple viewing spots for today the best choice for most is the final climb of Le Ballon d’Alsace which tops out at 1171m at 6.8%. With nearly 55 kilometers of racing left to the finish I doubt it will decide the stage but contenders won’t sit idle either. If you’re staying in Colmar, Strasbourg, or Mulhouse and plan on cycling you should consider driving to a spot, parking, and then riding the bike.

A very strong cyclist could ride from Colmar or Mulhouse but that would be one very long (100-ish miles round trip), tough day with an early start and a late finish. I’d suggest driving to a spot like Thann or Belfort and then riding to the climb. If you think the round trip is too short than remember that you can climb Le Ballon d’Alsace a few times while waiting for the race to arrive.

For those wanting a more relaxed time today check out the finish in Mulhouse. As a final option you could view the race from the climb of Le Grand Ballon which is closer to Mulhouse but also falls earlier in the stage so you would have to start earlier. From the center of Mulhouse to Le Grand Ballon it’s about 27 miles one way, more manageable if you want to leave the car behind and only ride your bike today. 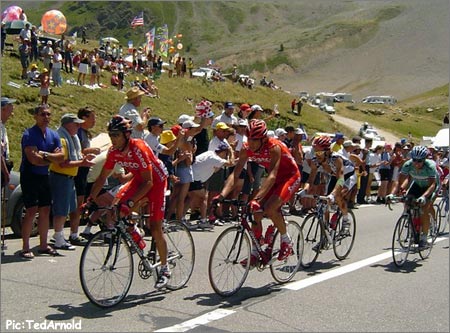 The view of Le Tour from a climb calling early in the stage. Note that the crowd here is not as rabid as on a finishing climb. This 2003 stage clings to my memory as later in the day Joseba Beloki’s spectacular crash made for one of the most dramatic moments in recent TdF history.

Along with the 57-page guide Arnold created a support mechanism via his velotainment.com website where travelers can seek out additional information if they wish. “I don’t think the guide would be as valuable to people without the extra level of support the travel forum will offer them. I’ve created a bulletin board where people can log on and ask questions—ultimately all the parts work together to create a comfort level for their planning,” said Arnold.

At $19.95 the price tag seems fair considering the amount of money you can save by doing the planning yourself. The free online forum is a nice security blanket too. For those waiting on a certain rider to decide his participation in Le Tour 2005 the guide is a safer bet perhaps than booking a more expensive trip. Plus a portion the profits of every book sold will be donated to the Lance Armstrong Foundation.

You’ll meet all kinds of people on the road and these two made for quite a day of laughs. They are circus clowns by profession that were visiting Le Tour on their off day. Their wine was more like paint remover but it is impolite to refuse—the key is not to pour it out while they aren’t looking as they’ll give you a refill.

BOTTOM LINE…
Ted’s done a great job creating this thorough “do-it-yourselfer’s” guide – and most travel/ tour operators should take note to see how it should be done. It’s the kind of info that is often provided by the full-service tour operators, but I’ve never seen it done with so much inherent knowledge of following one specific race in one country.

About the only thing missing are the actual route maps of each stage – but these don’t become available to the public until just a few weeks before the Tour, (and that’s why God created Michelin maps).

The guide may not be for everyone, let’s face it – it’s pretty nice to have someone else deal with your bike and the immense logistics of planning this style of trip – but for self-reliant and budget-minded souls it no doubt gives you the tools to plan a great trip and will help you avoid the numerous pitfalls you may (ie: will) stumble into.

Where To Get It
If you’re interested in more information or want to buy it, check out www.cafepress.com/velotainment