Chasing Flanders: Pez On The Cobbles

It’s hard to say whether you should feel happy looking out of the window and seeing rain on the morning of the Ronde van Vlaanderen. But slick cobbles make for ‘epic’ racing, and Vйlo Classic Tours showed us an epic day…

An early start and then off to the press centre for that all important pass, before braving the rain at the start. Usually it’s a bit easier to ask brainless questions to nervous bike racers, but today they were very reluctant to sign on due to the miserable morning – 7 or 8 Celsius and raining. Opportunities were limited to the final log-jam as almost everyone tried to get up the sign-in ramp at once. I didn’t have the heart to speak to Aaron Olsen (Saunier Duval) who just looked C-O-L-D on the start line.

Not cold, nor wind, nor stinging rain could dampen our day chasing the Ronde with Vйlo Classic Tours Cold.

The ‘band’ were doing their bit to liven things up with some accordion based rhythm and blues classics – there’s only so much time-filling you can do with a rather ropey version of ‘The Young Ones’, but two things cheered the drowning fans out front.

We got a special guest appearance from a very fit looking Ludo Dierckxsens, and then we proved that ‘people power’ lives in Belgium as those at the back succeeded with a chant to get all the umbrellas lowered so they could check proceedings.

Boonen fan club photo – one of approximately 300,000 such opps through the day.

We then hooked up briefly with Aaron Kemps (Liberty Seguros) once he’d put his name down for a rather tortuous day in the saddle.

Pez: Hi, Aaron. It’s Pez Cycling News.
Kemps: Oh, yeah .. yeah, yeah, I know the site.
Pez: Are you enjoying the European weather?
Kemps: (Laughing) Much of a muchness for Belgium! It’s pretty miserable … I’m just planning on getting to the finish of the race, building the experience. It’s going to be hard … there are no easy sections in this race. I’m racing Gent-Wevelgem and Paris-Roubaix, so it’s a pretty full program for me … OK, gotta go!

On the start line, Quickstep looked completely at ease with their favourites’ status. Pozzato looked so relaxed it was as if he was just getting in from a night on the Leffe, Bettini was laughing and joking, and Boonen was shooting the breeze with his buddies, right under the ferocious glare of 100% Belgian expectation.

Henk Vogels looked pretty grim-faced about his day’s work: “It’s going to be horrible today, very hard. There’s going to be a lot going on, even in the first 100kms. It’s a hard race anyway, but the rain makes it worse.”
Pez: We rode some of the climbs yesterday, and they weren’t pretty.
Henk Vogels: Well … these climbs are bad enough when there’s no rain, so …
Pez: How are Davitamon-Lotto going to stop Boonen?
Henk Vogels: (Grimace)

The gun went all of a sudden, and off they went, with lots of journos and photographers still in the middle of things. As the team cars slowed down, we got a nice wave and smile from none other than Manolo Saiz – so maybe his reputation is ripe for a bit of rehabilitation? 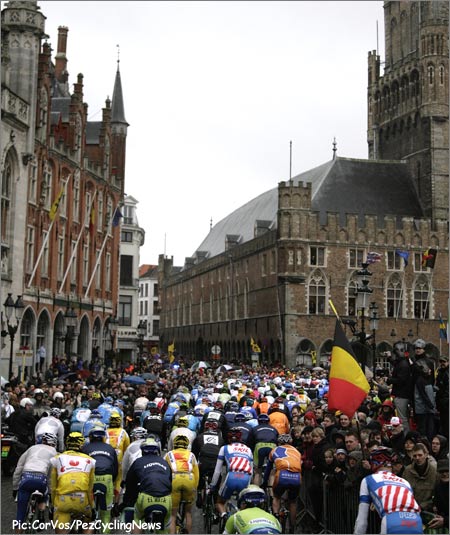 Once the peloton was rolling, we jumped into the van for the drive out of Brugge to Oudenarde to catch the start of the women’s Ronde, and then another quick van ride to see the ladies take on the cobbles at Kerkgate, then climbing the Boigneberg – in all, the VCT crew got three glimpses of a smashed women’s peloton today, and the same with the men.

Liquigas leads the chasing pack on the Kerkgate.

A quick walk back to the Kerkgate and the men flew into view – Klier leading the early break, and Liquigas dragging the peloton along moments later. CSC were taking things seriously on this stretch with three staff with wheels and food spaced just a few hundred metres apart.

CSC wheel guy … long sprint back to the van once the riders were gone.

Another super efficient van transfer into Geraardsbergen and we were all primed to grab our photo opp spots for the final acts of the Ronde. Some of the group opted to watch the unfolding drama on a giant screen while others took the chance to head right up the Kappelmuur.

The crowds on the Muur: thick with anticipation just before Boonen arrived.

The crowd was in great form, with kids playing and families enjoying the atmosphere, although there was a bit of ‘good-natured’ booing as King Albert II appeared on the big screen. He might be King of the Belgians, but everyone present knew who the real King of Flanders was.

He wore a white jersey with rainbow stripes and he imperiously took charge of the race when he followed Leif Hoste’s attack, as the crowd began an early celebration. 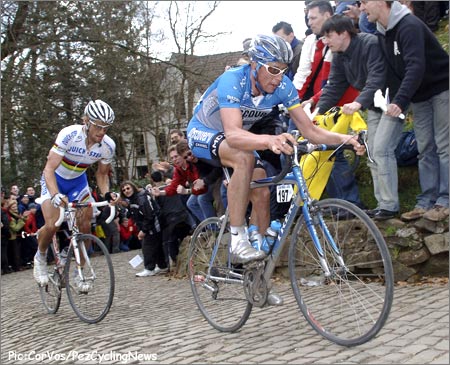 Hoste makes his bid near the top of the Mur.

The celebrations got longer and louder shortly after 4.30 – Hoste’s final desperate jump went nowhere, and the singing began as Boonen rolled out of his slipstream to score one of the great wins wearing the arc-en-ciel jersey.

With the day’s business done for both riders and spectators, it was a chance for the VCT crew to take up residence at a bar halfway up the Muur (or down, depending on your point of view!) for a well-deserved beer.

Belgian TV is now playing footage of Boonen hugging his girlfriend, then Wilfried Peeters, then everyone in the Quickstep organisation to the theme tune “Ooh La La, Tombo!” Seems a pretty fitting end to the day!

PEZ is travelling with Velo Classic Tours during this first Classics week.
For more information, log on to
www.VeloClassic.com or call 212.779.9599 2006 color brochure and itineraries are available.

The Ronde Cyclosportif: Go Where The People Go

Gent-Wevelgem 1974: Barry Hoban Takes Us Back