So far the tv coverage of racing in Ponferrada has been anything but picturesque, so PEZ took a trip to the nearby ancient and scenic caves of Las Medulas for a taste of local culture, chorizo suasages, and gelato.

Wikipedia says it best: “Las Médulas (As Médulas or As Meduas in Galician language) is a historical site near the town of Ponferrada in the region of El Bierzo (province of León, Castile and León, Spain), which used to be the most important gold mine in the Roman Empire. Las Médulas Cultural Landscape is listed by the UNESCO as one of the World Heritage Sites.

The spectacular landscape of Las Médulas resulted from the ruina montium, a Roman mining technique described by Pliny the Elder in 77 AD. The technique employed was a type of hydraulic mining which involved undermining a mountain with large quantities of water. The water was supplied by interbasin transfer. At least seven long aqueducts tapped the streams of the La Cabrera district (where the rainfall in the mountains is relatively high) at a range of altitudes. The same aqueducts were used to wash the extensive gold deposits.” 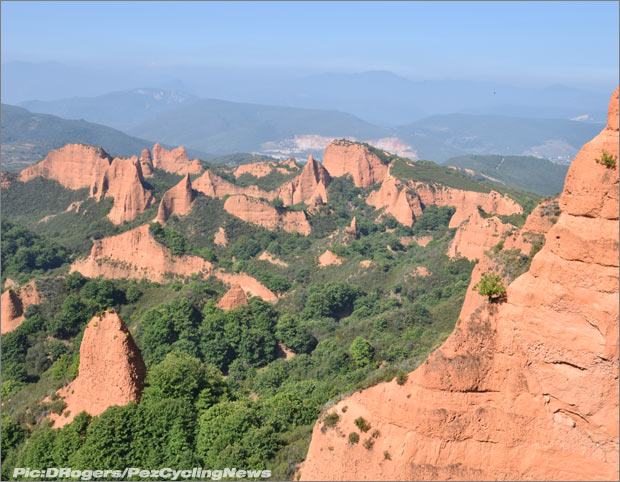 The collapsed hills reveal where the Romans mined for gold.

If you want to escape Ponferrada for a day, this is one of the best alternatives, save drinking heavy red wine and “botillo” (heavy, delicious sausages) which will put you in a food coma for hours, a fun way as well if you have the stomach.

Start from Ponferradas’s only funky cool cafe/bar/knickknack/gourmet shop right across from the castle atop the hill. While taking in the various old bikes and other entrapments with assorted couches, stock up on food there – it also serves ice cream if you need a sugar boost. Roar downhill over the bridge and at the first roundabout turn left onto Ave. Castillo following it out of town which will take only 10 minutes. 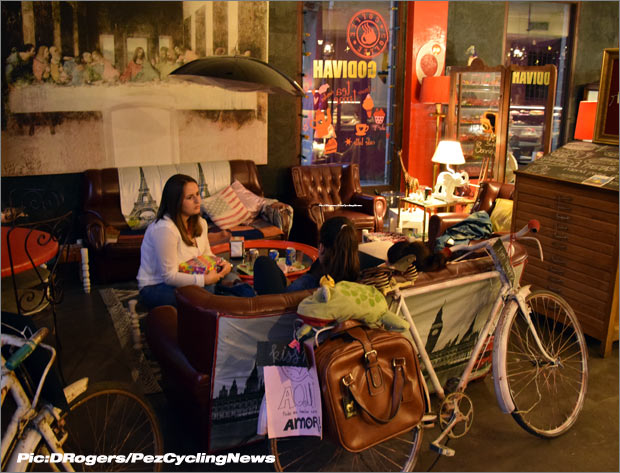 It becomes Spanish national road 536, and there will be assorted signs for Las Medulas which means literally “Marrows” but more loosely “the spinal chords” perhaps due to the shape of the carved hills of dark orange ocre earth more than the color of the gold pillaged centuries ago by the Romans. 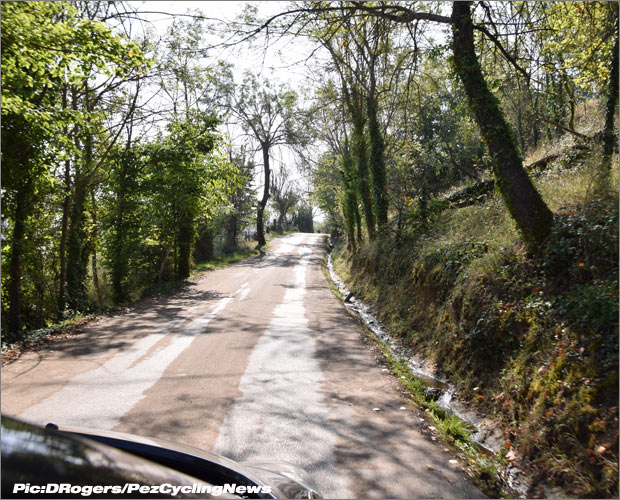 While we did this excursion by car because my amiga & guide Noelia didn’t have a bike, it’s an easy bike trip that should take only about an hour. As we began, we passed the American pro team out training on the route. 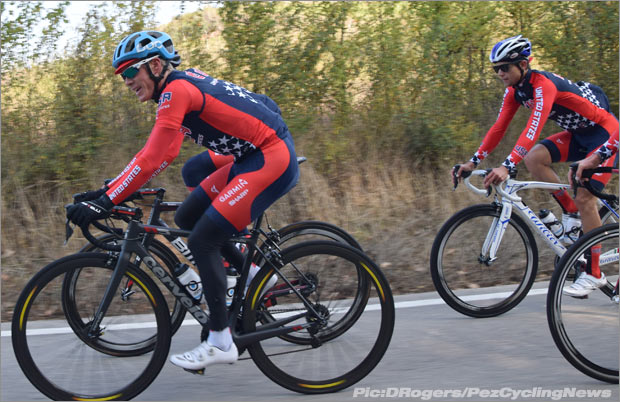 In the first few kms outside of Ponferrada there is a beautifully carved chestnut trunk with one of the “templanos” (templars) worthy of a quick stop, stretch and photo. 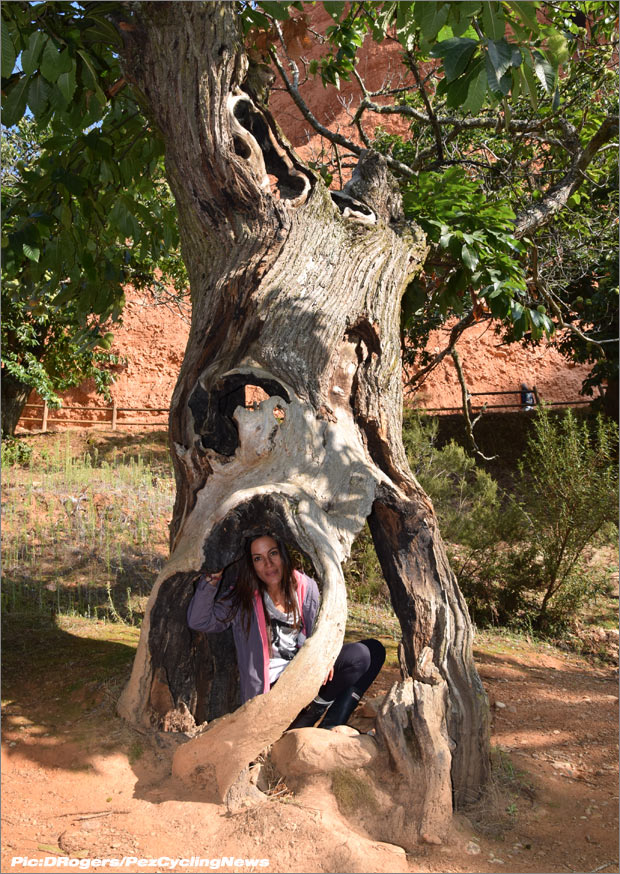 The route we took has mostly flats until a bit of incline to the hiking part which anyone can do, but be warned, if you go a day after the rains the silty mud will ruin your shoes. Some Begians came in white, yes, white shoes and pants, but the rains were a few days ago so they were fairly lucky; but Belgians being hardcore Belgians, they scoffed at the mud patches and didn’t care about their shoes. 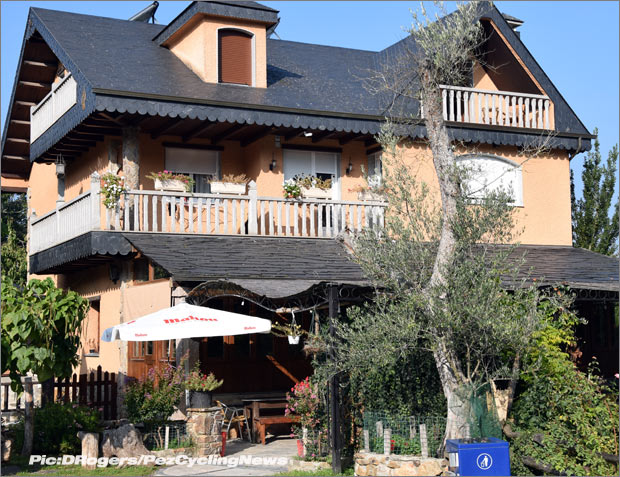 Before we made off onto the hike the local two-story lodge/cafe/bungalows called us in for Cafe Americanos (strong, delicious and 1 Euro.) While lounging around the front yard: an idylic beginning with birds chirping, chickens running about, butterflies, and soft, warm sun. You can stay overnight at one of their bungalows, or in the town. 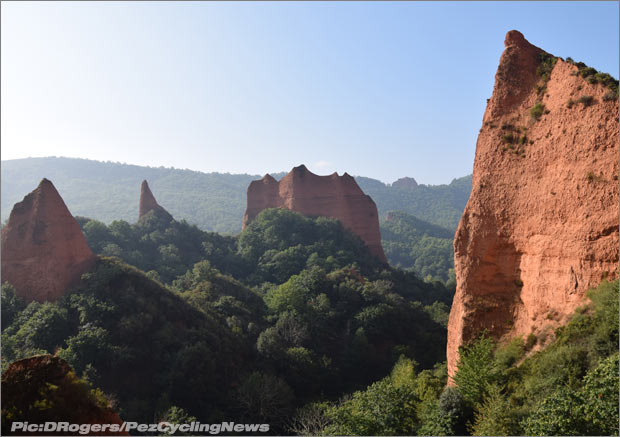 The hike is partly shaded and pleasant, with Birch and Chestnut trees everywhere (they create chestnut everything, including some liquers), and with hawks and swallows swirling above, it was a very scenic 10 minute stroll to the caves. 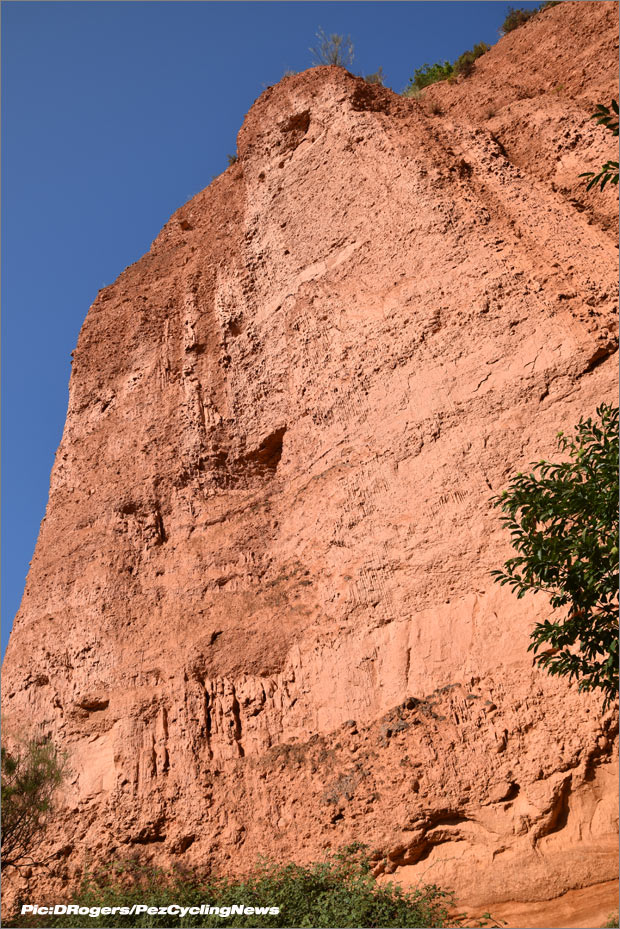 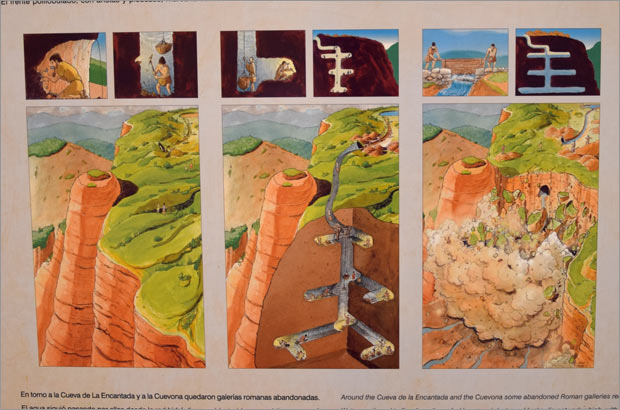 Note when you get to the caves, there is a tape to basically deny you the pleasure of walking up the steep but easy incline into the caves. Ignore it like the Spaniards and go under the tape and explore, there’s no one to stop you and no one seemed to care. Several caves with amazing views of the valley floor are worth hiking over to — hopefully your camera/smartphone has a panoramic setting on it. 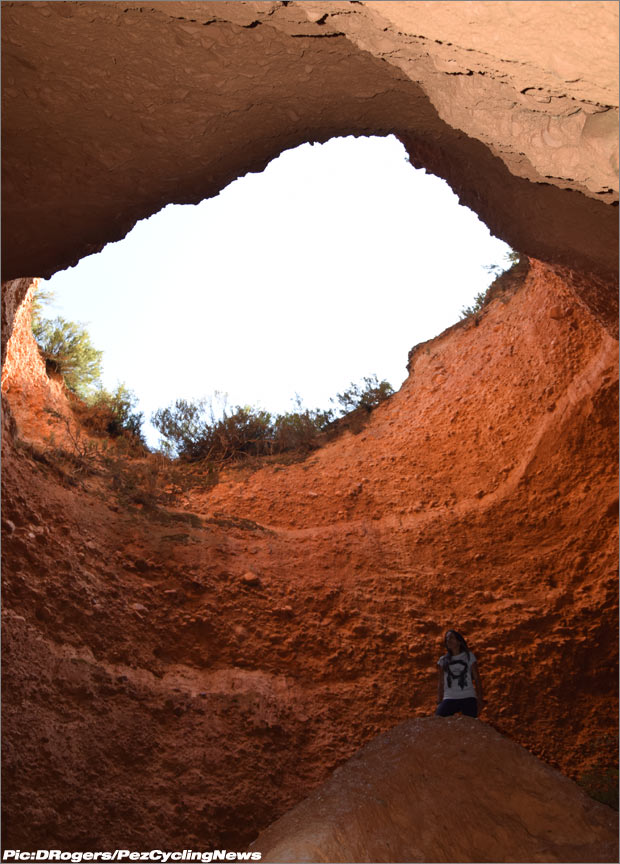 After you’ve tried to create a better echo than exists from the apex of the cave’s central peak, return back to the lodge and either have a drink or siesta on the grass or if you’re ready for a workout, grab your bikes (and extra pair of lungs) to prepare yourself for the climb to the real panoramic view that, aside from the ascent, will also take the breath away. 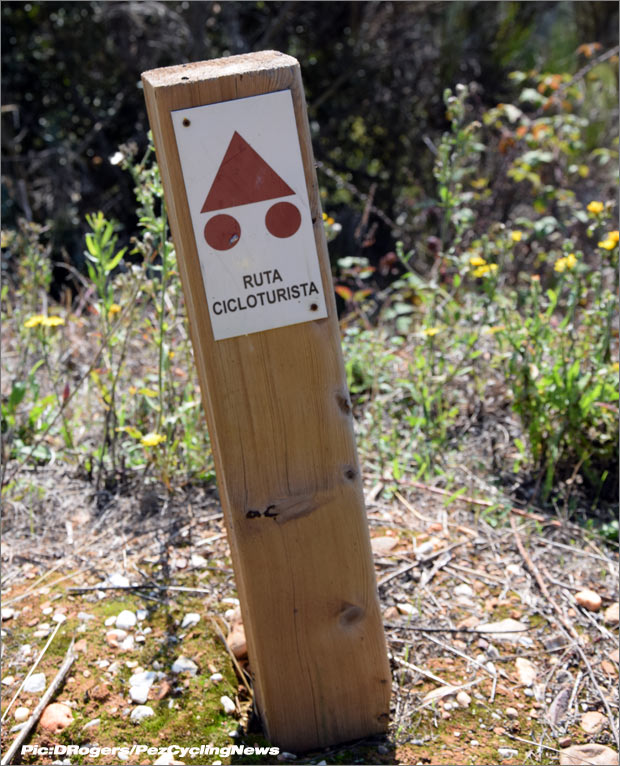 A posted sign for you to turn right (Orelan) begins the Dantesque ascent winding up tight turns will take you up various road types: smooth, newly paved, to where at times unpaved (but doable) gravel awaits, and, higher up, has a few serious trench-holes. The ascent goes for about 5kms. 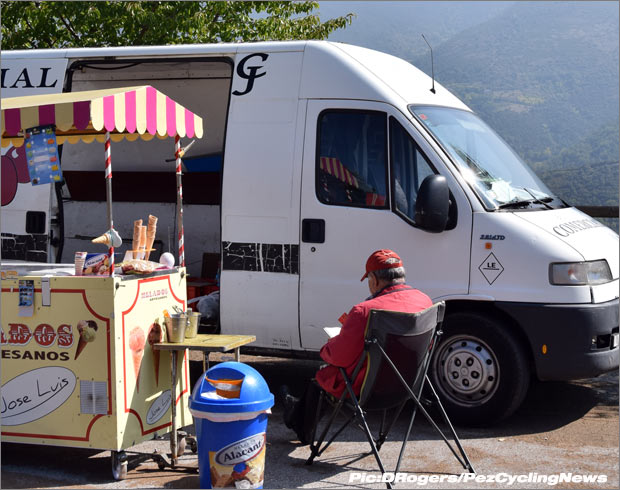 The good news aside from burning off calories? Gain them back by visiting (yes-I’m not kidding) the fabled ICE CREAM TRUCK atop the hill. I was in shock, I always promised my friends during a grueling climb: “Don’t worry, there’s an ice cream truck at the top waiting for us”; finally my lie came true without knowing—or earning—it.

The retired Jose Luis, who is more intersted in reading his novel than serving you his 10 flavors in 4 languages, will oblige you if prodded, and even be in your video if he likes you. Take your treat up to the views and savor both slowly: a duet of epic views and gelato. If you want, next to the panoramic platforms, spend 3 euros and they’ll give you a cheap yellow construction hat and hair net to walk through the former gold mines and explain how the Romans used water currents to cut through the silt to deposit the gold. Since Noelia, a local from a nearby village, took me, we were both free. It would have been worth the 3 Euros anyways.

Upon descent, a fast one, make a quick right/left turn at the bottom and you are back to the N536. 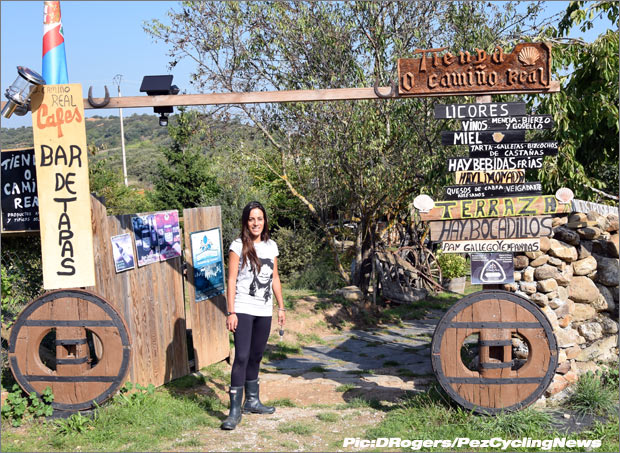 Our favorite surprise was stopping at the “Tienda De Camino Real” which has been opened for only a few months – what a treasure run by a nice couple. We gobbled some high end chorizo and did more cafe Americanos (served with small unsugared donuts). 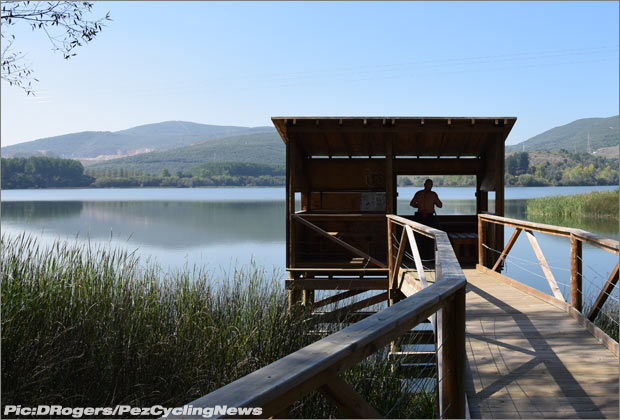 After wobbling out, get ready to stop again in maybe 400 meters on the right side as Lake Carusedo awaits – do stop. The water is warm and there are kayaks and a cafe as well. Apparently there are huge carp in the lake as well – I didn’t see any – but would have jumped in the lake that was big enough to explore with a canoe/kayak for a few hours; if I had the shorts I would have gone in as it is clean. The cafe was open with almost no one around.

To get back to Ponferrada is easy: rather than go back the same way, which also is a fine idea, you can take the other National road 6 by taking the first right turn after continuing past the lake which jets you quickly down a steep descent onto where it meets the 536 at the outskirts of Ponferrada in +40kms.