Fancy yourself a hard man in the truest sense – the ‘Flemish’ sense? Then riding the famous bergs of the region is a must do. Among the countless cobbled strips that dissect the hills of the Tour of Flanders, a few have become famous as cycling paths of the Gods (or so we think). PEZ takes a ride up the best, and nastiest of them all. 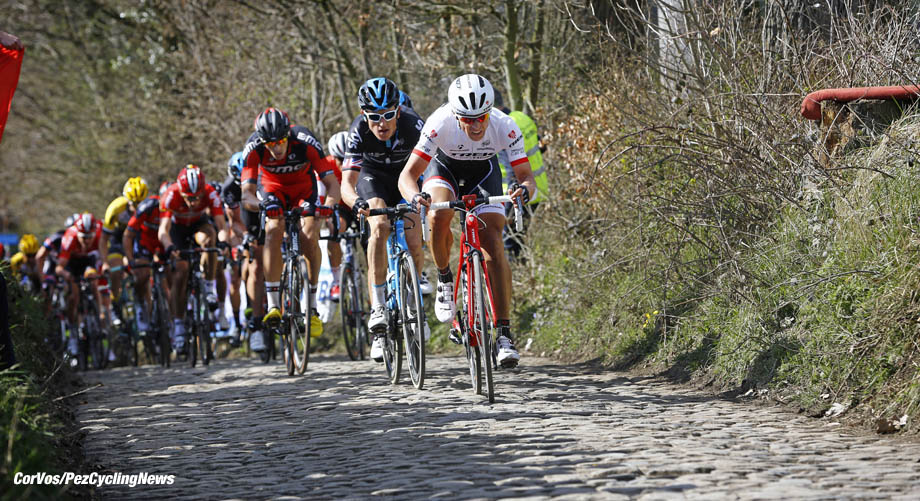 Hard Belgian Stijn Devolder leads up the Koppenberg in 2015

In the Ronde Van Vlaanderen, a hill is never merely a hill, each one has a unique character and a favoured route to the summit. In these parts, local knowledge is as important as a powerful pair of legs. To give you a sense of the unique challenge riding the Belgian ‘bergs, and some sneaky local knowledge so you can beat your friends to the top, I rode some of the key hills a week before the race. If you are coming to Flanders yourself, the best way to get out and ride the famous bergs are the host of signposted routes, and the Tour of Flanders sportive held the day before the race (Pez rode it here). 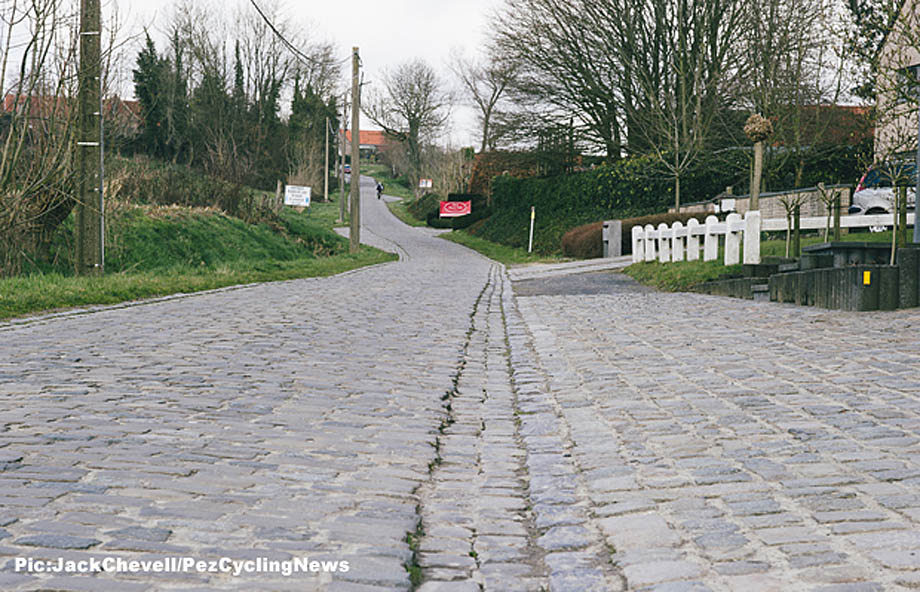 EIKENBERG – 1250m, 11% Max Gradient
The Eikenberg usually finds itself used early in the Tour of Flanders as an hors d’oeuvre for the main course later in the day. The cobbles are closely set and though it’s quite a long climb, the gradient is never too severe. The turn at the bottom is quite wide and allows you to carry plenty of speed, so it’s possible to stay in the big ring all the way up. The high speed and The Eikenberg’s position in the race means it’s not generally a place you expect to see attacks, though a strong team pulling together can hope to hurt some legs. 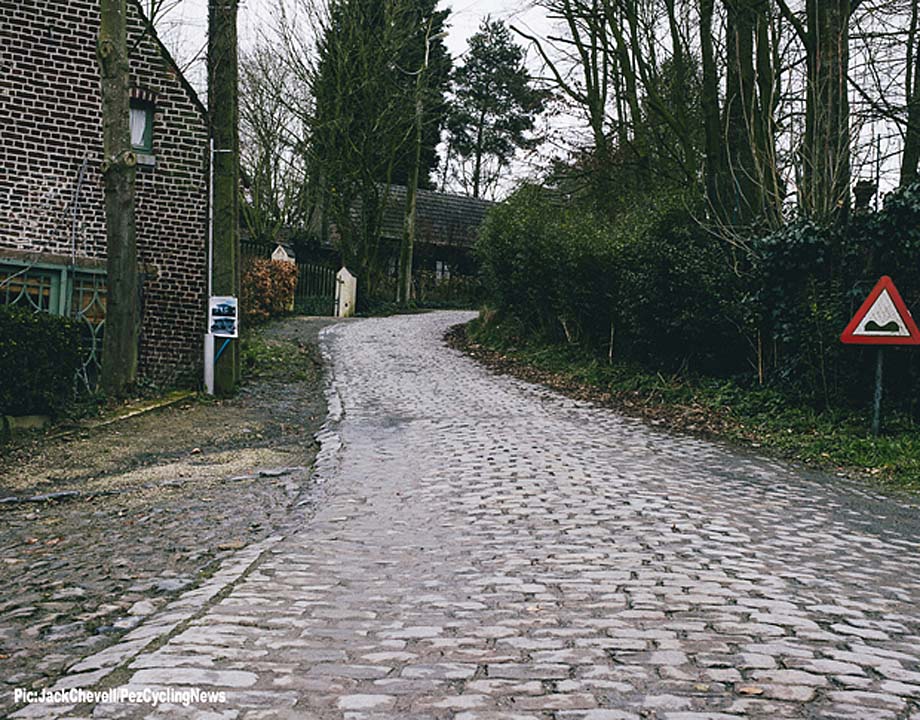 MOLENBERG – 500m, 14% Max Gradient
I first rode this climb on a rainy February day. The cobbles stood out like stepping stones in a river flowing down the hill. The single track road had such a pronounced crown, that it’s precipitous edges were impossible to ride. Water filled the broad gaps between loose cobbles that moved under the wheels. If you plan on riding this one yourself, you’ll be pleased to hear that it has recently received some maintenance. The crown is less severe and some of the holes have been hastily filled with concrete. Without the savage surface, this one is quite short, and not too steep. If you want the KOM, carrying momentum through the turn off the main road is key. The hardest section is at the bottom, if you can get through that it eases up as you reach the summit. The Molenberg is very narrow and slightly hidden from the main road. It’s easy to ride straight past. Look out for a yellow building and a sign for the pretty water mill which gives the climb it’s name. 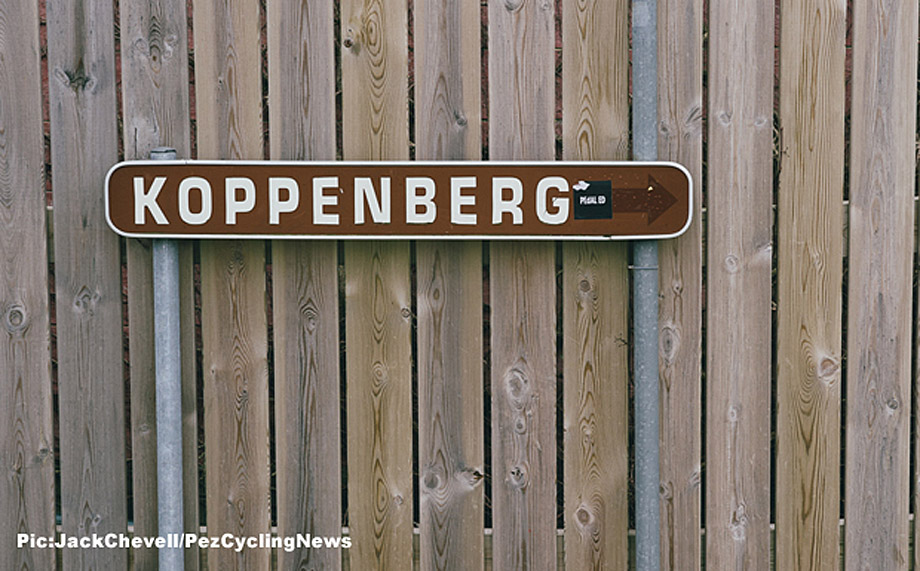 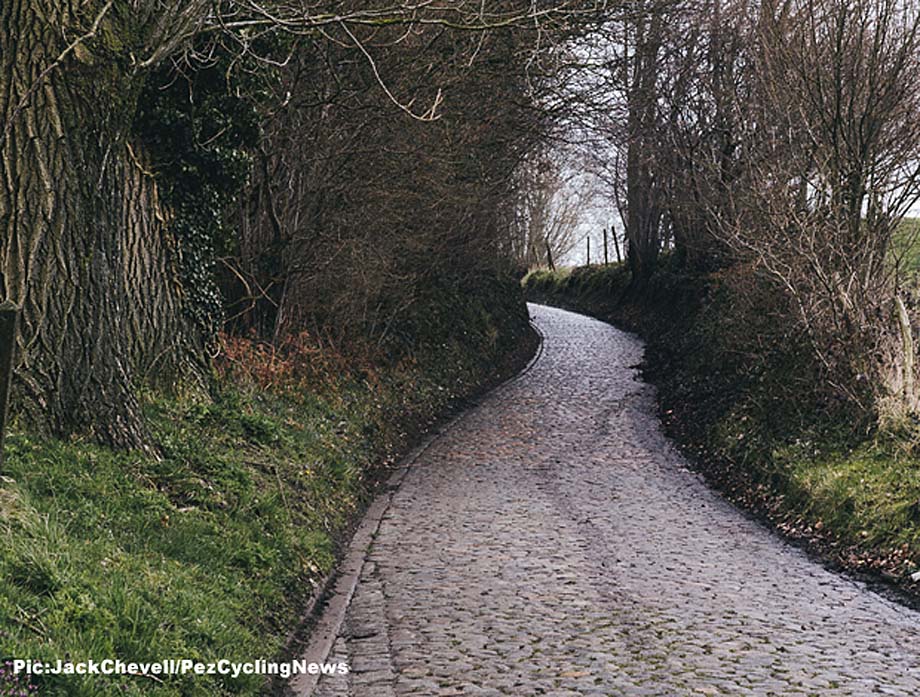 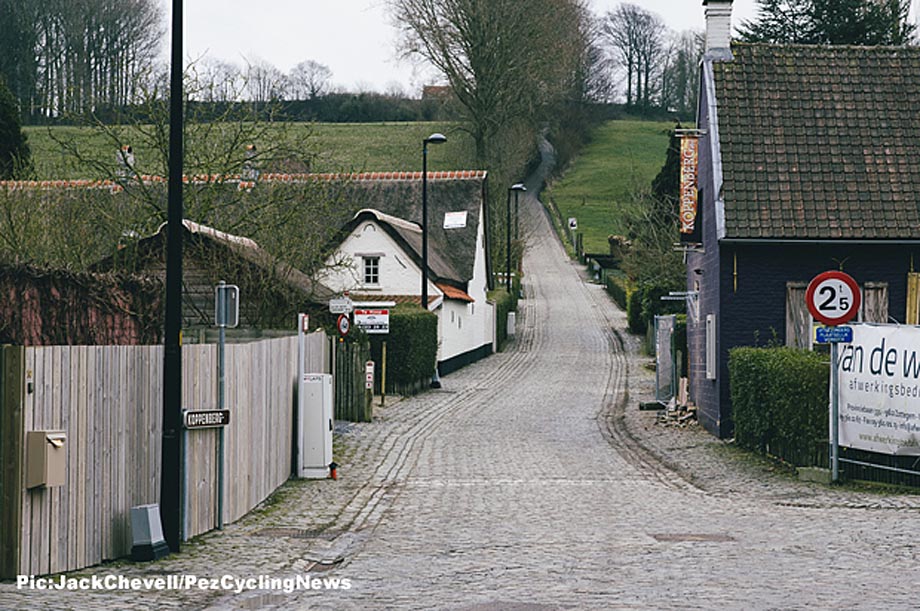 KOPPENBERG – 620m, 19% Max Gradient
The Koppenberg is deservedly one of the most famous climbs in the world. It encapsulates everything racing in Belgium is about. A hard, fast exposed highway section funnelling down into a stretch of cobbles barely wide enough to get a car up. Coming along the race route, the climb is hidden until the final second, when a sharp right turn reveals it’s entire length ahead, and up. Very up. Fortunately for you, the cobbles have recently been relaid, so the surface is free from deformation and holes. Unfortunately for you, about half way up the gradient reaches 19%, the trees prevent the road from ever drying, and the steep mud banks have washed onto the road. Maintaining traction is the biggest challenge, spin up the back wheel or put a foot down and you’ll be walking the rest. Expect to see the pros scrapping over the cleaner left hand side of the road. If you’re here with your riding buddies, stay to the left and you’ll always beat them to the top. 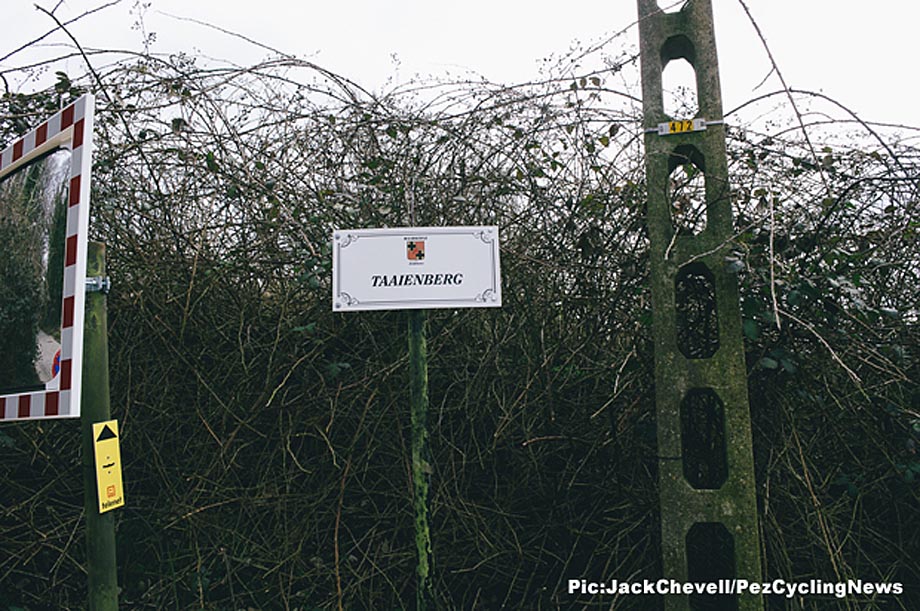 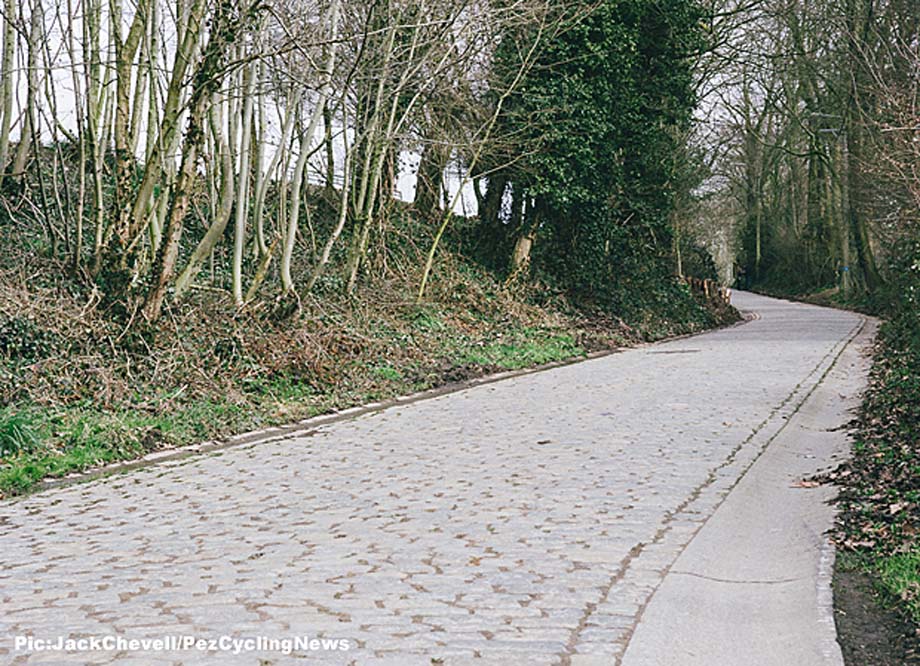 TAAIENBERG – 800m, 18% Max Gradient
If your riding the Flanders Sportif, congratulate yourself on having got up the interminable Steenbeekdries. It dragged on forever from the main road back into the hills, but now your enjoying a fast flowing descent with a lovely view of the bergs and windmills. Sadly the descent is a brief one, and after losing all your momentum to a hairpin left turn, it’s a very unwelcome 18% grind up the Taaienberg. A new surface and cobble free gullies along each side make it more manageable, but the top never comes soon enough. Mud tends to get dragged into the left hand gutter too, so on this one, stick it in the gutter on the right to win the sprint for the sign. For the pros, it’s position 35 kilometres from the end of the race makes this important. In recent years, the Taaienberg has become known as ‘Boonenberg’. Tom Boonen has habitually launched aggressive attacks here over the years. Remember Omloop Het Nieuwsblad, when Lars Boom ended up on the floor in a battle for the gutter? That was the Boonenberg. Tom Boonen will be missed this year recovering from a shoulder injury incurred at Paris Nice. 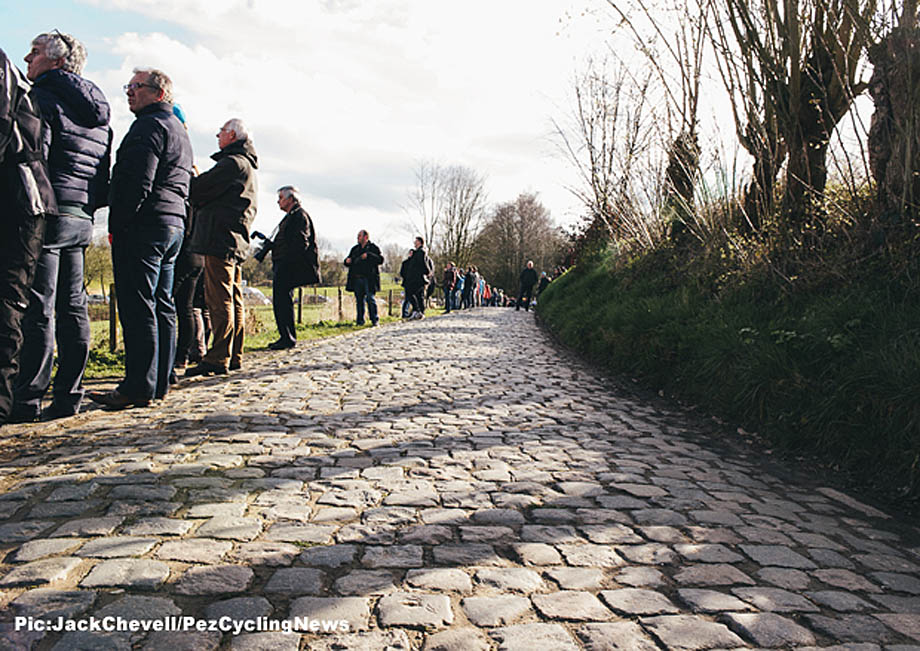 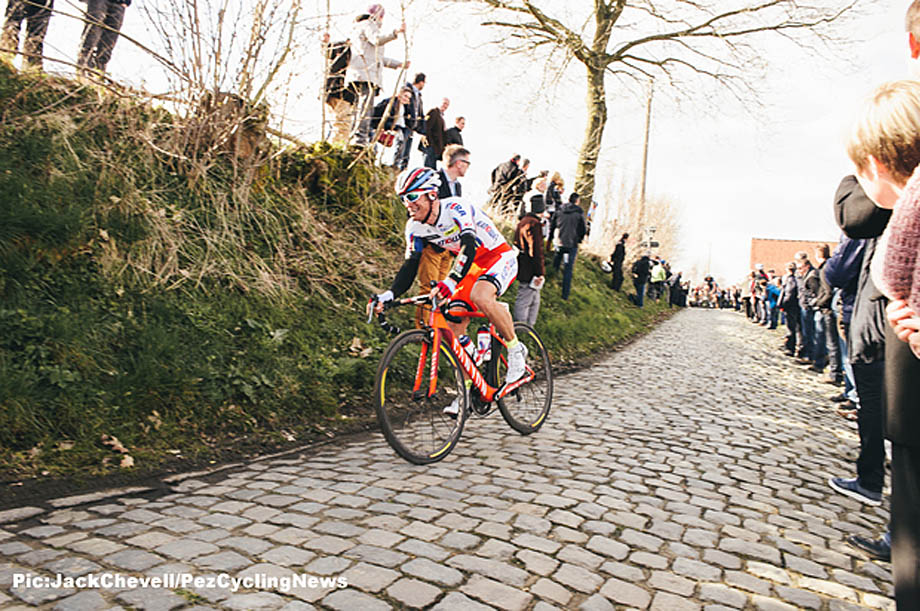 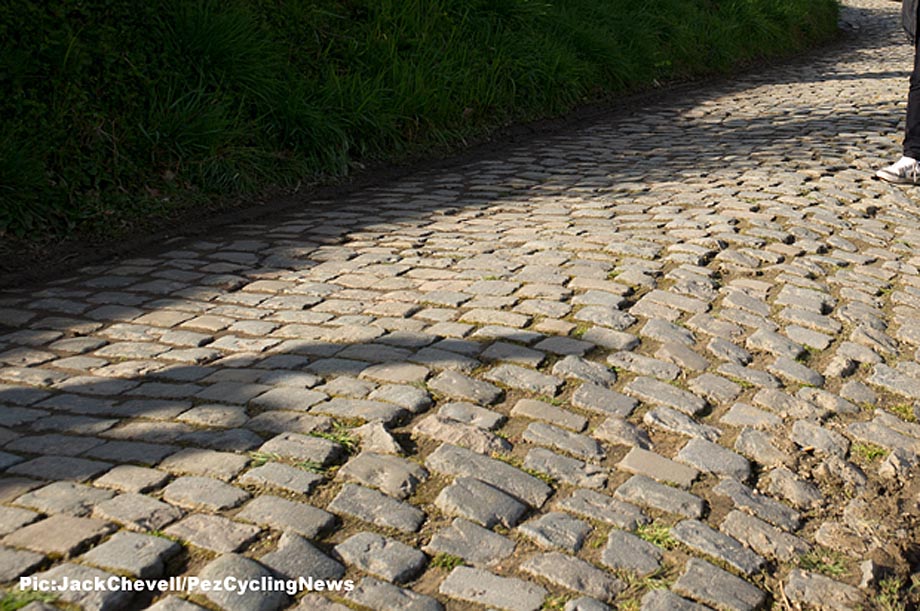 OUDE KWAREMONT – 2200m, 11% Max Gradient
Since the changes to the course a few years ago, the Kwaremont has become one of the pivotal moments in the race. In Sunday’s race, the Oude Kwaremont will be the penultimate climb. Coming 17 kilometres from the finish, there is sure to be action here. For me, the Oude Kwaremont is the hardest of the hills on the Ronde route. It’s the longest one and feels like it will never end. The first few hundred metres are on tarmac, ‘This isn’t so bad’ you tell yourself, ‘I’ll settle in, it’ll be fine’. Then the pave starts, the gradient kicks up, and the fun really starts. The steepest part of the climb comes at roughly half way. As you ride into the town of Kwaremont, to what seems like the logical summit, you still have a kilometre of the roughest cobbles to come. Finding the strength to accelerate over them is a feat reserved for the Pros. For me the top half of the Oude Kwaremont is a miserable slow bumpy grind back to the main road where there’s time for a quick breath and a drink. If you’re riding the sportif though, savour the brief respite, because the next challenge is just moments away. 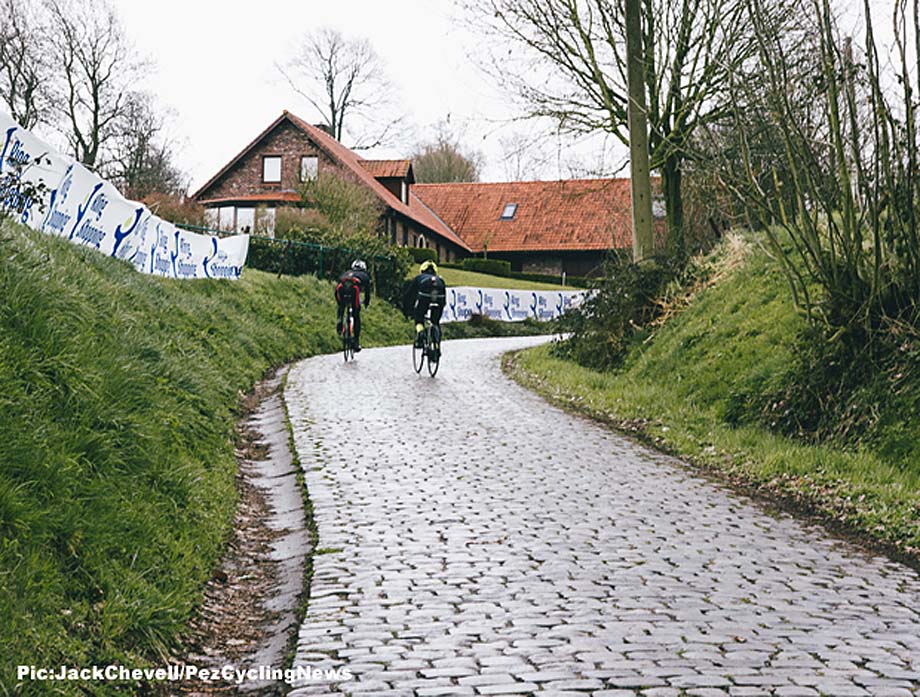 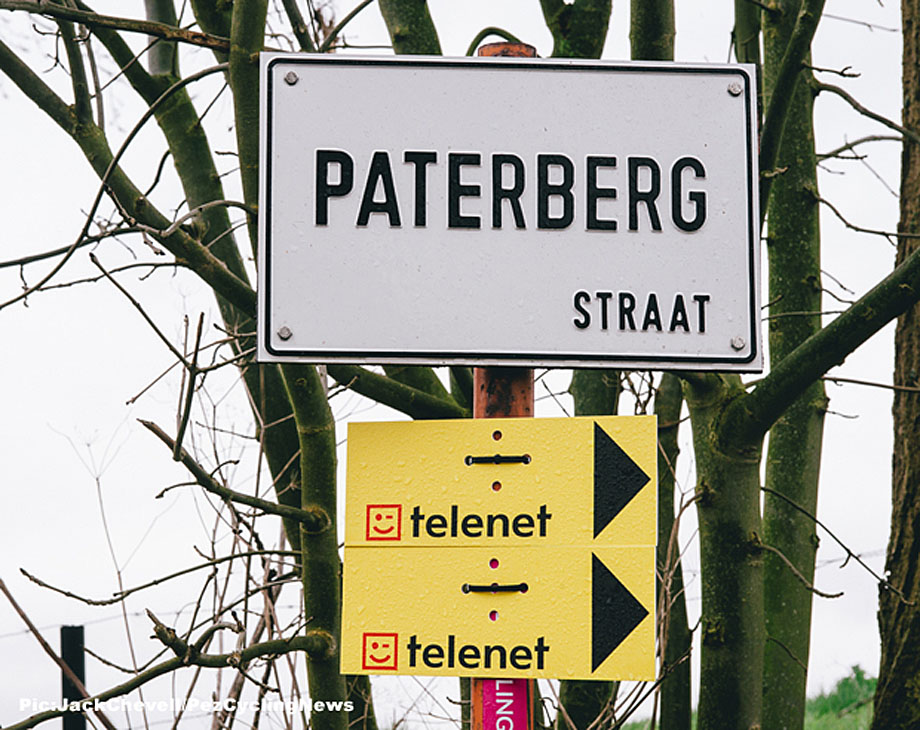 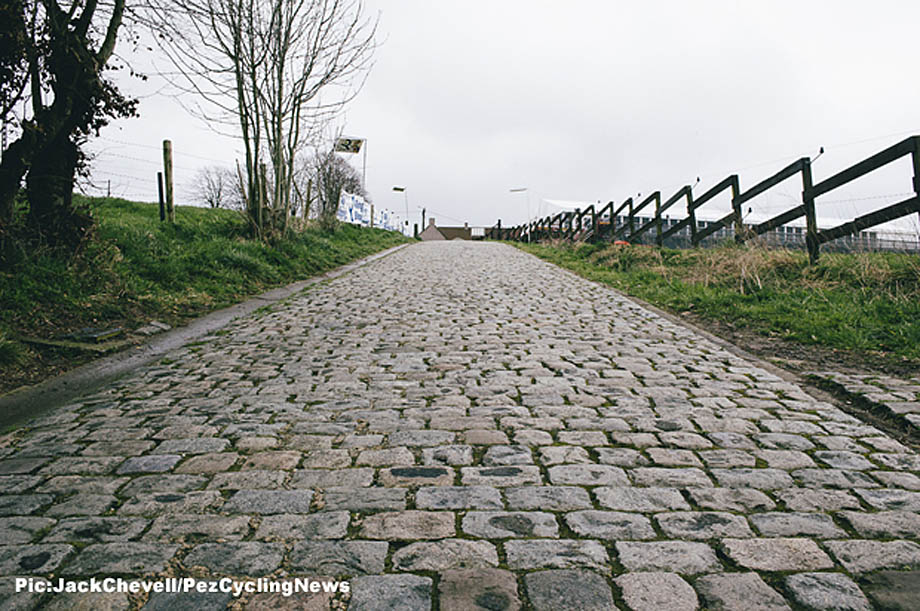 PATERBERG – 380m, 20% Max Gradient
The Paterberg is the shortest and steepest climb of the day and it comes just a couple of kilometres after the Oude Kwaremont. Since 2012 it has also become the last one before the finish. After again having to hand over all your speed to a sharp turn at its foot, there’s nowhere to hide from the extraordinary gradient which kicks up immediately. There is a gutter running down the left hand side and in the race you can expect to see another fight for the lead here. On the day I went up, a week of heavy rain had washed a soupy layer of mud over the benefits of riding the gutter, so beware. Nothing but power will get you over this one fast. Hit that turn at the bottom as hard as you can, stay in the saddle, and pretend you’re Eddy Merckx or Tom Boonen or anyone else you want to be until the road flattens out at the top. From here it’s a largely downhill 13 kilometre time trial to the finish and a beer in Oudenaarde. 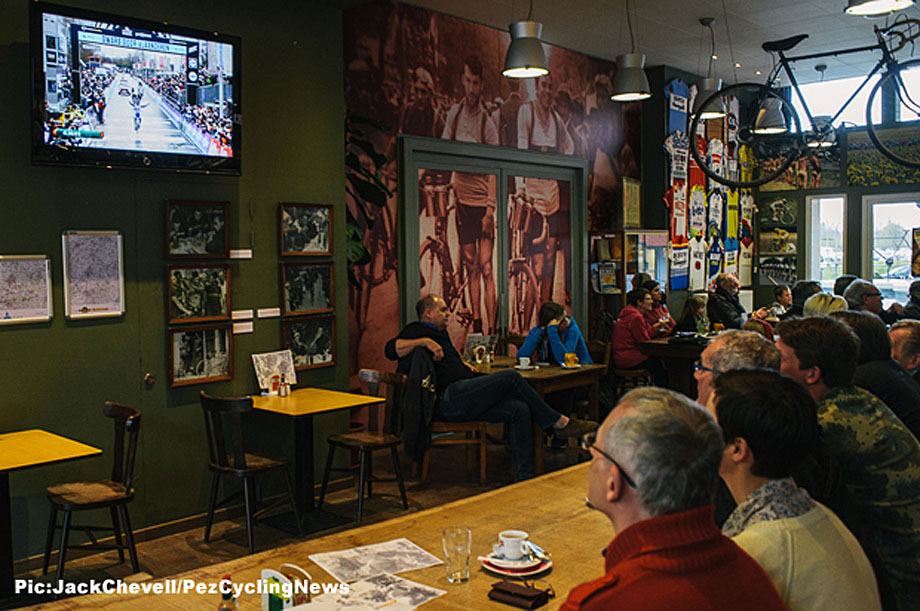 DE FLANDRIEN BRASSERIE
It would be cruel to describe the rigours and challenges of the Tour of Flanders without also offering a reward for completing them. The brasserie attached to the Tour of Flanders museum in Oudenaarde is a wonderful place to finish off your own experience. I recommend a Kwaremont beer, and the famous Spaghetti Boonenaise. In the brasserie you’re almost certain to bump into famous cycling faces, past and present. World Champion Freddy Maertens is the curator of the museum and it’s a popular place for pro teams to finish training rides. 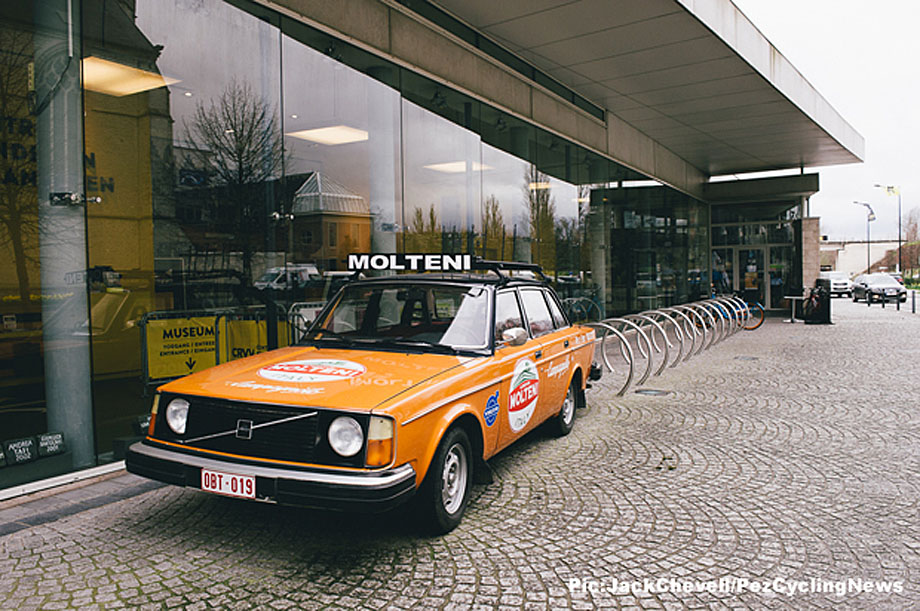 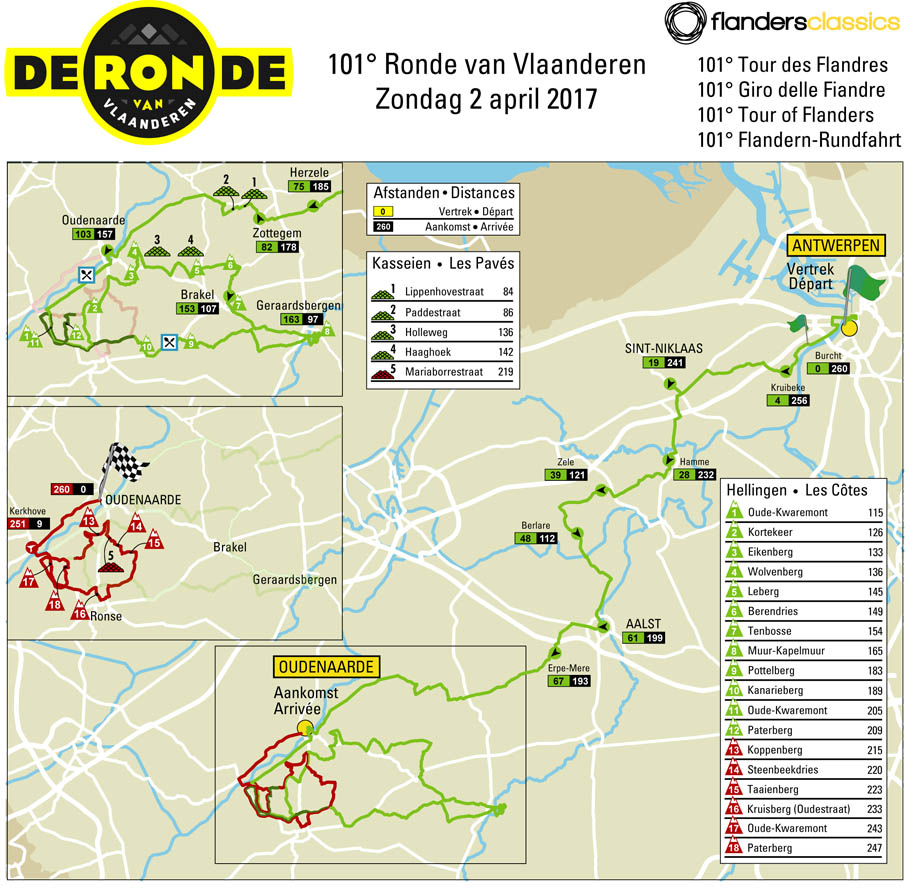 The climbs and cobbles of De Rone van Vlaanderen 2017