As the 2020 Tour de France prepares to depart from Paris; the ‘Pez’ himself, Richard Pestes has taken a look back at the impromptu BBQs he’s happened upon while roadside. The Pez Grand Tour appreciation of the sausage… and bike racing. 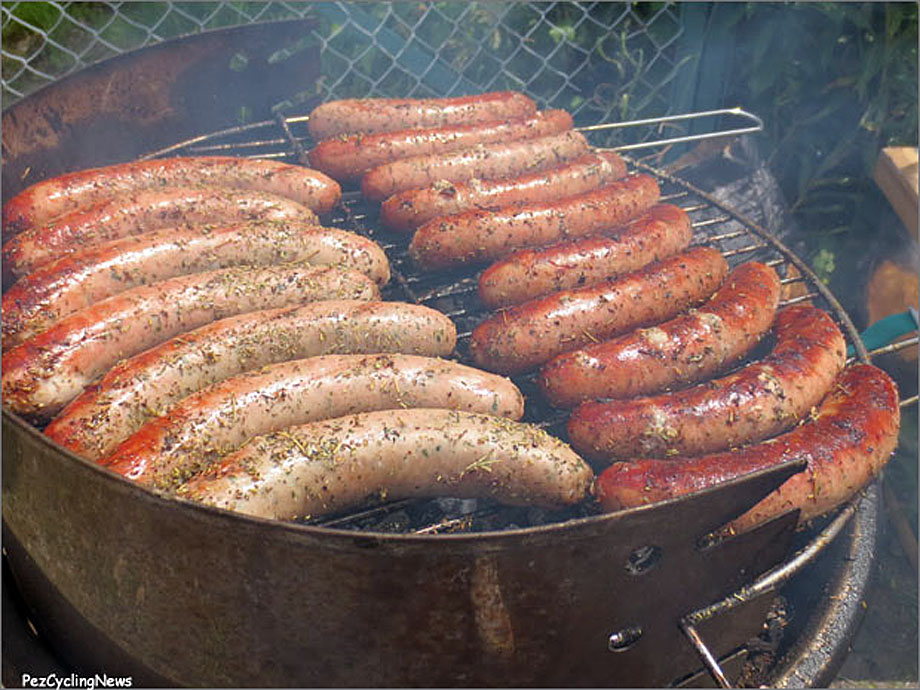 With over a decade of chasing the Grand Tours from the Roadside point of view has led me to one undeniable conclusion – everything goes better with sausages. Nothing says good times like a smoking grill and that mouth-watering aroma of sizzling spices, seasoning, fat and mixed meat bits – mmm mmm good.

As Mrs. Pez likes to say when I’m off to chase a Grand Tour, or any work-related event really… “Have a nice holiday”. And let’s face it, no holiday is complete without some good food – so diving in and sampling local cuisine is one of the great reasons to go somewhere else. And roadside at a bike race, be it the Cobbled Classics, the Giro, the Tour de Georgia (remember that one?), is never complete without some type of grilled meat as part of the day.

The Tour de France is no different – sure they speak a completely different language, and I can barely understand a word of it, but no matter what language you speak, we all understand the meaning of roadside smoke emanating from any small hibachi-shaped device.

And the savory spices of a smoking sausage have a special way of really snapping out the jet-lag. My first ride was the final 40+ kms of Stage 8, taking in three smallish – medium climbs to the 15% slopes above the lakeside town of Gerardmer. The penultimate climb was a ball-buster up the 3km long Col de Grosse Pierre with about 1500 meters in the middle at 16% – and that is STEEP. The top flattens out to a perfect landing pad for campers and tourists, where I caught my breath and a glimpse of a smoking grill, sausages sardined across the glowing coals. I quickly turned around to investigate and no surprise here – the whole set up was manned by some Belgian fans (who really know how to do this right). They’d erected a gauntlet of sorts – barbecue on one side, beer keg on the other. I gladly accepted the offer of a cool glass of Jupiler, but alas, the sausages weren’t ready and I had to roll on. 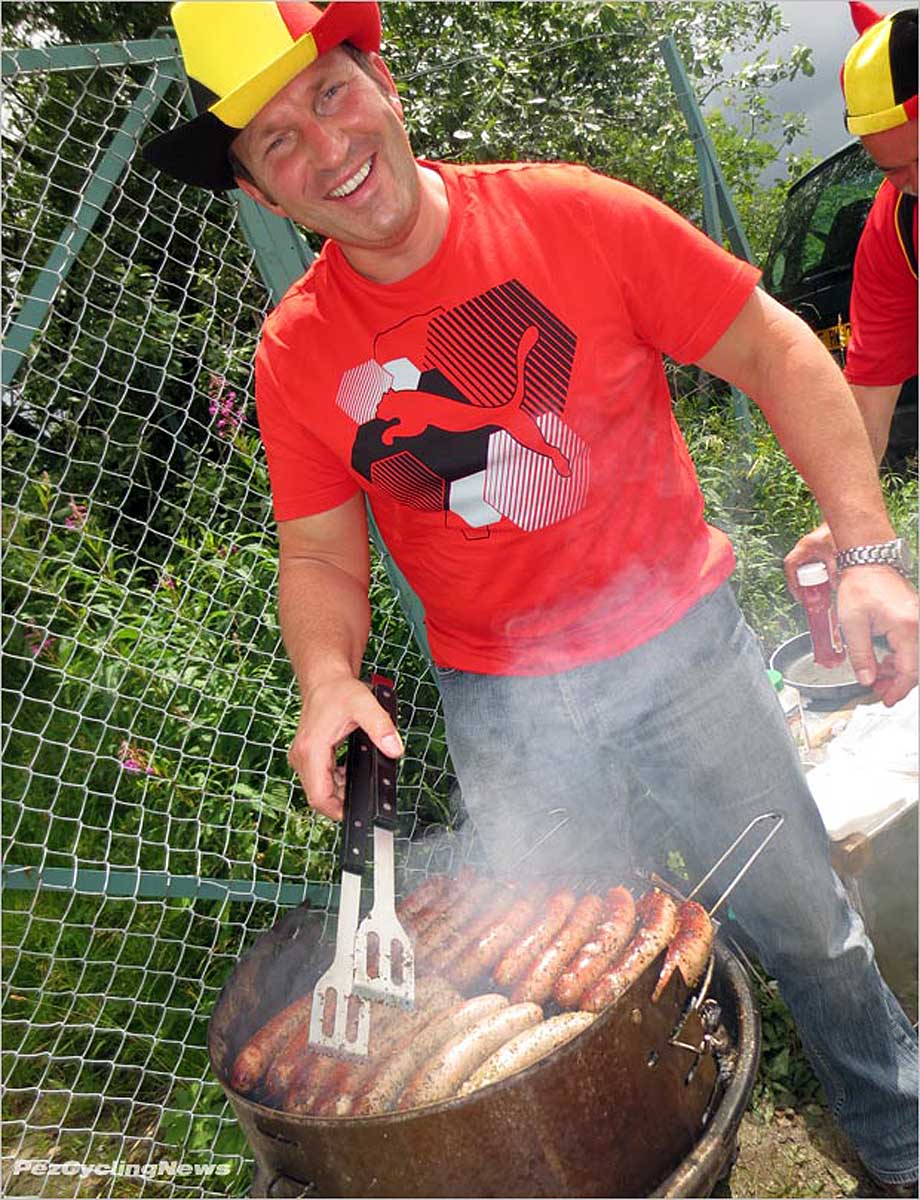 French cuisine has rightfully earned its place as one of the distinct tastes of the world – and as such you either like it or not. But within France the food and flavors vary widely across the geographic pentagon’s five points, and in the Alsace region, local eating features heavy influence from right next door in Germany. Beer and a bratwurst go together like sugar and spice, so after stage 8’s lengthy but scenic drive through the mountains from the stage finish to Mulhouse, it was late enough that most restaurants were closed when we wandered into the central square, and found our choice of two open eateries, both serving ‘local cuisine’. The place had a distinctly, shall we say, Alsatian feel, which could easily be surmised as lager & lederhosen. 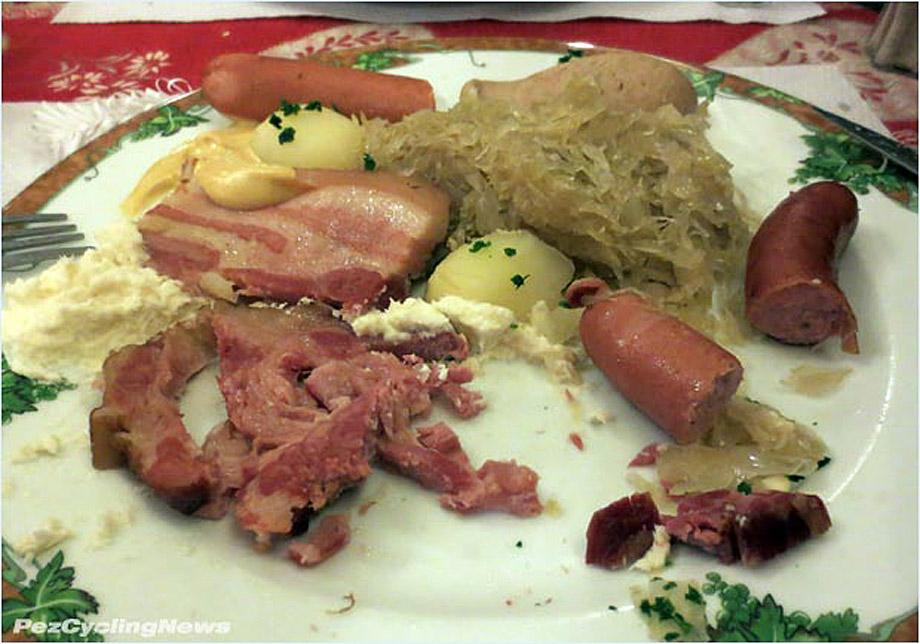 Not every sausage is worth its weight in beer, or sauerkraut… like this mixed grill I ordered our first night in Mulhouse.

My dish however, looked even less appetizing than an old leather chamois, and the promised mixed grill revealed just how much the term “mixed grill” can be open to interpretation. There was a slice of fatty ham, something that looked like a colorless wiener boiled into a colorless off-white tube, something else that I at least recognized as a sausage, and a slab of well… fat. To say the least, I eyed up my driver Mino’s plate of grilled steak and frites with mouth-watering envy. The upside is that I did discover that almost anything tastes ok with enough mustard. 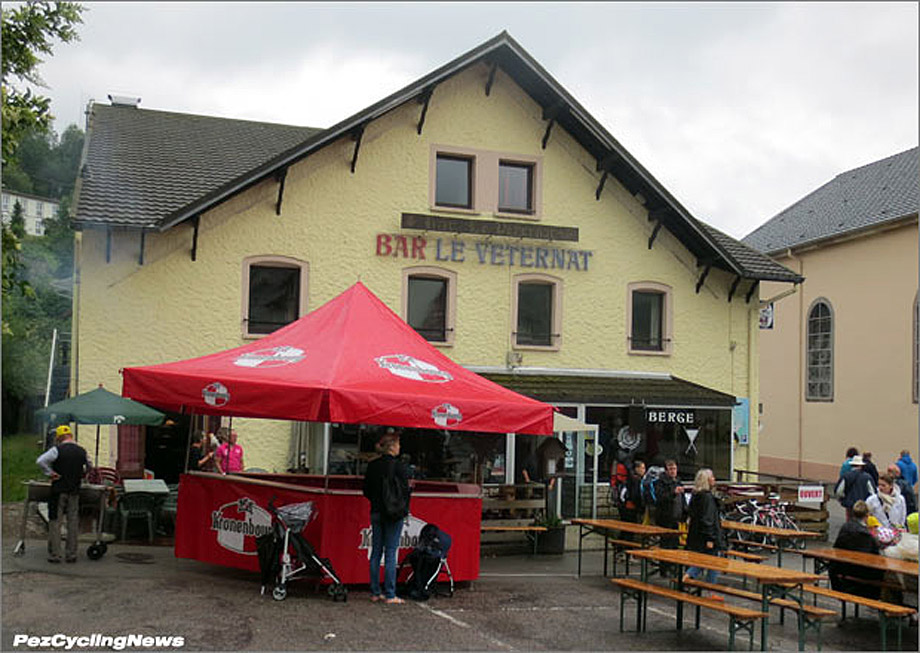 Stage 10 was a day of 7 rated mountains, plenty of rain, and treacherous conditions that led to Alberto Contador’s demise. After driving 100 or so kms and needing a break to stretch the legs, we rolled through the tiny village of Le Thillot – who’s main square was so filled with the smoke a burning wood, that the car almost stopped itself. As if in a trance, our legs carried us directly to the source, and the bar-cafe where wall to wall fans stared at the big screen as Contador fiddled with his shoes as the minutes counted past. Beer-packed trays floated past to thirsty patrons and coffees were ordered. But the smell of that outdoor grill kept tugging at my tastebuds, and while Mino exercised his usual vigilance that we not let the race get too close (ie: he was already back at the car, engine running) – I stepped over to admire the fire and enquire the menu. I recognized something that sounded like “chorizo” – one of my personal faves – and immediately ordered one on a bun. 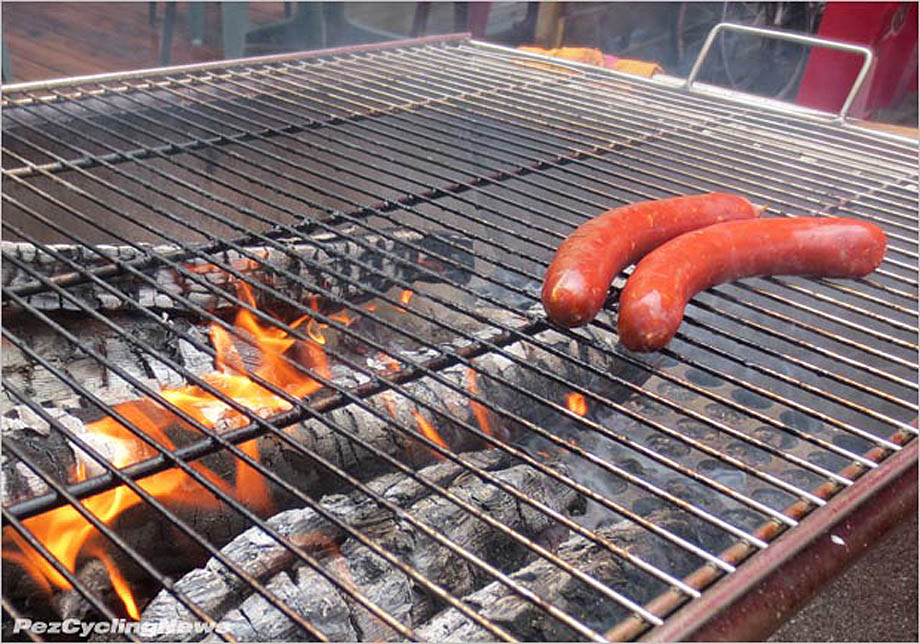 The spicy spears were about 8 inches long, but the thin kind – maybe 1/2 – 3/4 inches thick. After a slow cook (ideal for flavor, not so much for my antsy driver…), the griller Paul – or I should say chef – fit them side by side into a foot-long bun – and it’s worth noting here that French bread really is amazing. I dressed it with a quick stream of mustard and was off. The aroma was incredible, and from my first mouth watering bite I was in heaven. This thing was so good that I thought to myself over and over that “this is one of the best sausages I’ve ever had – top 5 for sure.” 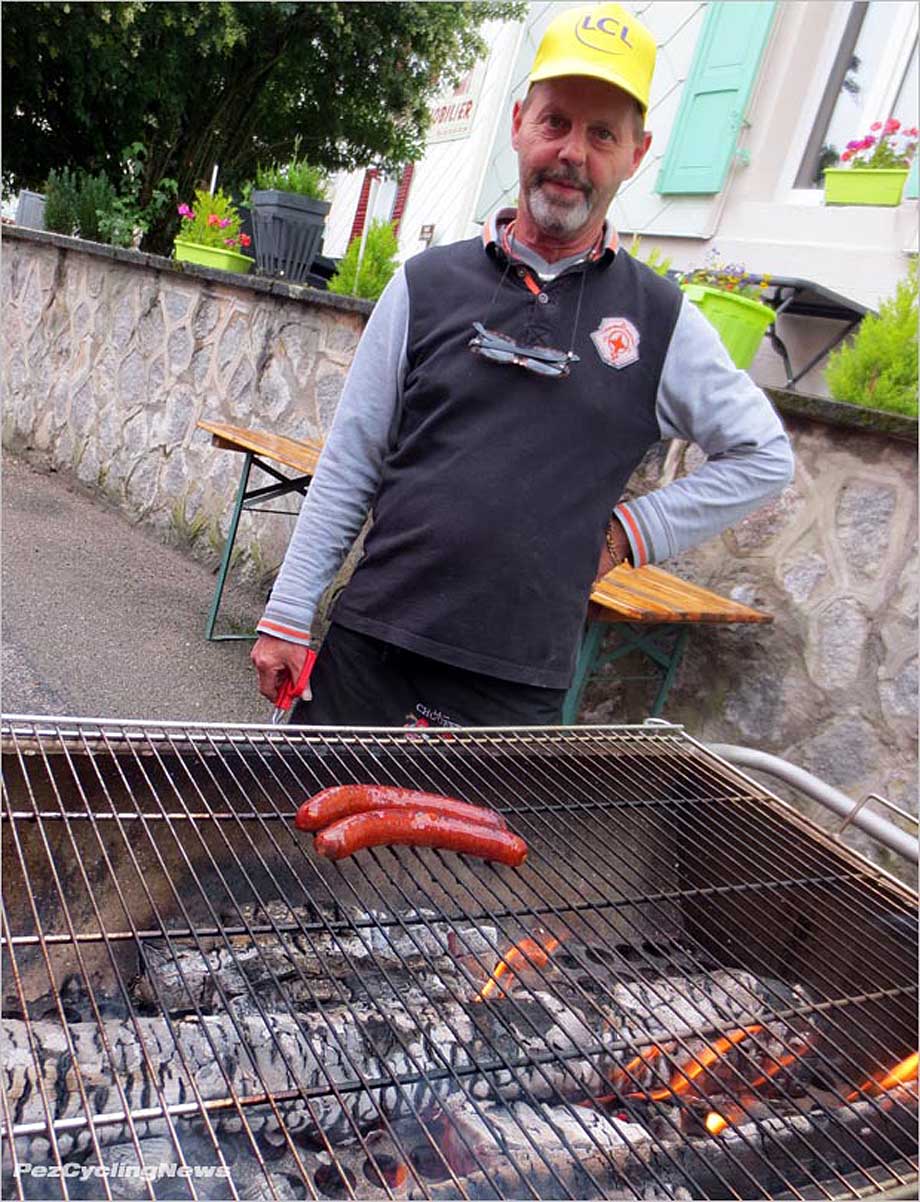 TDF’14 St.10: This smoking grill was all the invitation I needed for a stop in the town of le Thilot. Paul – on vacation from Brittany in northern France – grilled me up one of the finest sausages I’ve had – two in fact.

As well as a cornerstone of any good time – an unexpected sausage can turn just about any frown upside down. On the Tour’s first rest day in Besançon, we drove into the country to meet up with the Trek Factory Racing team bus driver Danny In ‘t Ven, and get a Pez-Clusive tour of one of the biggest busses in pro cycling.

We arrived early and had some time to kill while waiting for Danny to return from rare on-Tour bike ride, so settled in for a bite at the hotel restaurant. It had taken some hours to get here, and I’d run out of patience to decipher le menu. Luckily, every restaurant in France serves a ‘Plat du Jour’ – the plate of the day – sort of like a chef’s special. But unlike home it usually includes bread, soup or salad, a main, and often a desert or coffee – civilized indeed. My previous experiences with these had proven excellent – so I was in – didn’t even need to know what it was.

To my delight, this beautifully grilled local sausage arrived on a bed of potatoes, with salad, bread, and even a coffee after. 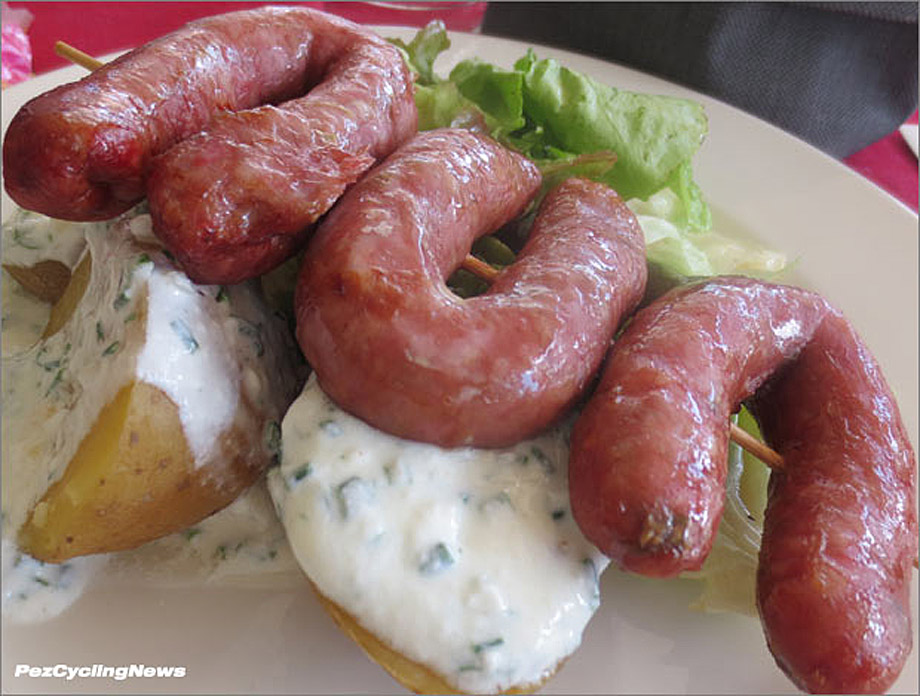 Our last day on the Tour was stage 14 from Grenoble to Risoul. The hot weather had been replaced by overcast skies, and we pulled into Briançon to see the race start the Col d’Izoard climb before heading for Italy ourselves. While looking for a good place to settle in for the race, I ventured into a small local expo that seemed to showcase various local merchants. It looked pretty commercial, and not in a good way, but that ol’ familiar smell of grilling fat once again pulled me in.

These ones were the minis – and not since 8th grade had I seen sausages so small – but they were a huge hit with the crowd – who devoured the most recent serving, and the cooks were scrambling to cook up more. Now, if only they had some beer and a buns to go with… 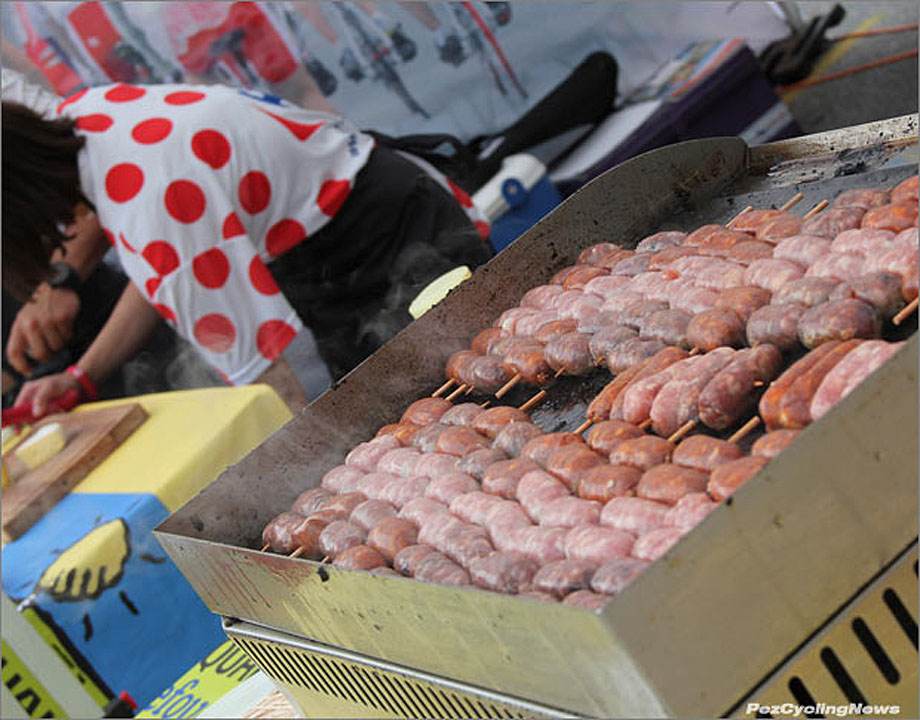 If the ratings scale for a successful Tour were sausages, I’d score this one a 10, and then order some more. Needless to say I’m already looking forward to my next Tour de Sausage.

– Thanks for reading –
Pez.