Riding across the Pyrenees from cost to coast and back is one of the all time epic rides.  It’s a road cyclist’s dream that PEZ-Fan Richard Watson lived for two weeks 2016, and now takes us along for the ride.

Eat, sleep, ride, repeat. It’s the cyclist’s dream. For two weeks in autumn 2016 I lived that dream in one of the cycling world’s most hallowed places: the Pyrenees mountains on the border of France and Spain with France From Inside tours.

My Pyrenees adventure began when reading an article on PEZ in 2013 about a bike tour that traversed the Pyrenees from Atlantic to Mediterranean coasts, and then back again. Twelve days of cycling and lots of climbing. It seemed like a crazy idea at the time as I was recovering from a bout of chronic fatigue/burnout due to a stressful job and a heavy racing and training calendar, so I filed it away in the “one day…” basket.

Fast forward to February 2016. I was ready! I’d gradually come back from 3 years of intermittent riding and was training regularly and doing a little racing. I was riding strongly with local racers most of who are at least 20 years younger than me (I’m 61.) More importantly a family cycling holiday in 2014 in France & Italy with my son had given me a taste of the great climbs (Ventoux, Galibier, Alpe d’Huez, Stelvio, Gavia, …) and I was hungry for more.

Immediately after I signed up my fantastic (southern hemisphere) summer form started to fade. To boost my confidence I did a very successful six day solo training camp in the Australian Alps in April but by then I was definitely overtrained and had to take a month break from cycling in May to recover. It was then a struggle through the cold and short days of winter to rebuild some fitness and endurance.

August rolled around and it was time to go. Apart from relatively modest weekly training I’d also done a couple of 160km rides and was feeling comfortable on the bike, but was pretty nervous about backing up day after day. After 36 hours in transit from Australia I arrived in Biarritz. Summer! Warmth, blue skies, beaches and surf. 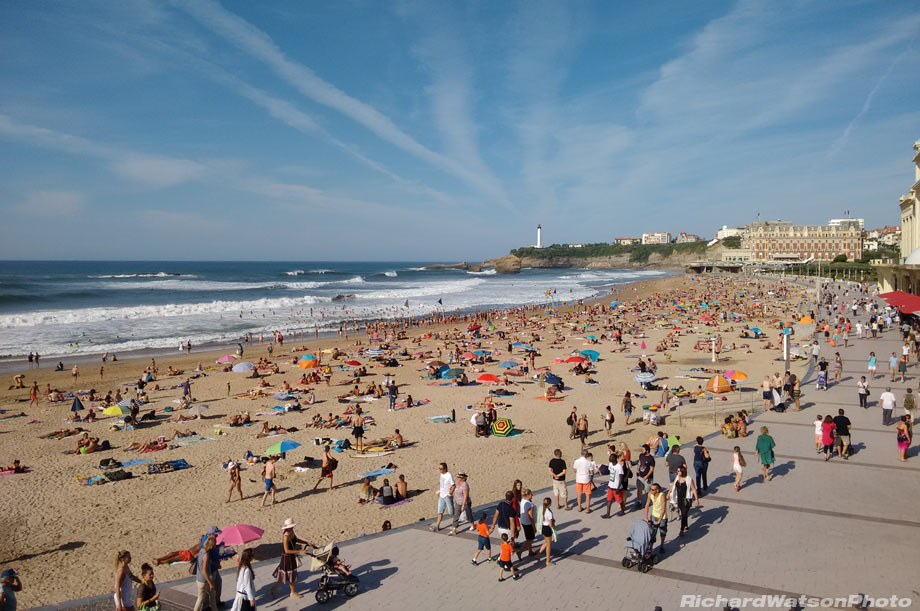 The riders, tour leader and organiser Allan Reeves, and driver Rob assembled at the hotel over a couple of days. It was a small group due to some late abandons, with just four full time riders plus Allan and Rob sharing driving and riding. All us newbies were a little nervous about how we would cope with the challenge, but very excited to start riding.

My start could hardly have been worse. The day before departure I came down with a stomach bug and spent the morning running to the bathroom. Fortunately I was able to eat a little that night and the morning of our ride. Day one dawned overcast and showery. This was the first rain in weeks so the roads out of Biarritz were slick and treacherous. Wade went down on a roundabout–fortunately at slow speed–then I crashed hard 30km later on a fast downhill. I cracked my helmet, lost a bunch of skin, and bent the derailleur hanger but I managed to keep going until lunchtime when I climbed into the van. 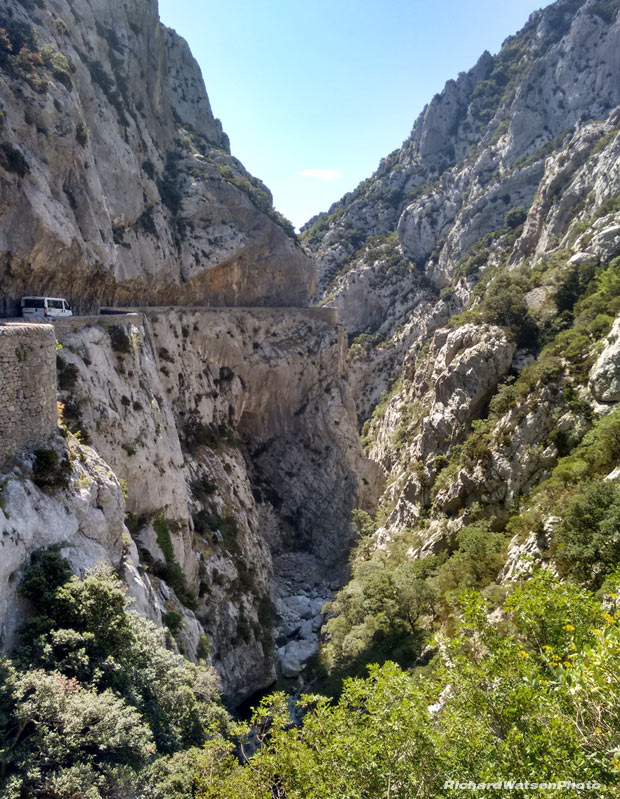 Fortunately that was my first and last journey in the van. As Allan constantly reminded us with his customary good humor, our aim was to “adapt and overcome”. I took this mantra to heart, and next morning I bent my derailleur hanger back into alignment with a crescent wrench, and overcame a long (175 km) day in the saddle, which included a very wet and foggy ascent and freezing descent of the Col d’Aubisque, where I was constantly off the pace and struggling with diarrhea.

And so it goes. By the end of day four we were at Collioure, a gorgeous seaside holiday town on the Mediterranean. Most days I struggled at times, especially so on the fourth day, an epic 210 km trek through the hot and dry Pyrénées-Orientales. With 80km to go after labouring up a long hot climb I seriously considered climbing into the van but was encouraged to carry on by Allan and my fellow riders. Good call. I fuelled up, recovered on the descent, persevered, and a couple of hours later with the Mediterranean in sight I found myself doing turns at the front of the bunch! 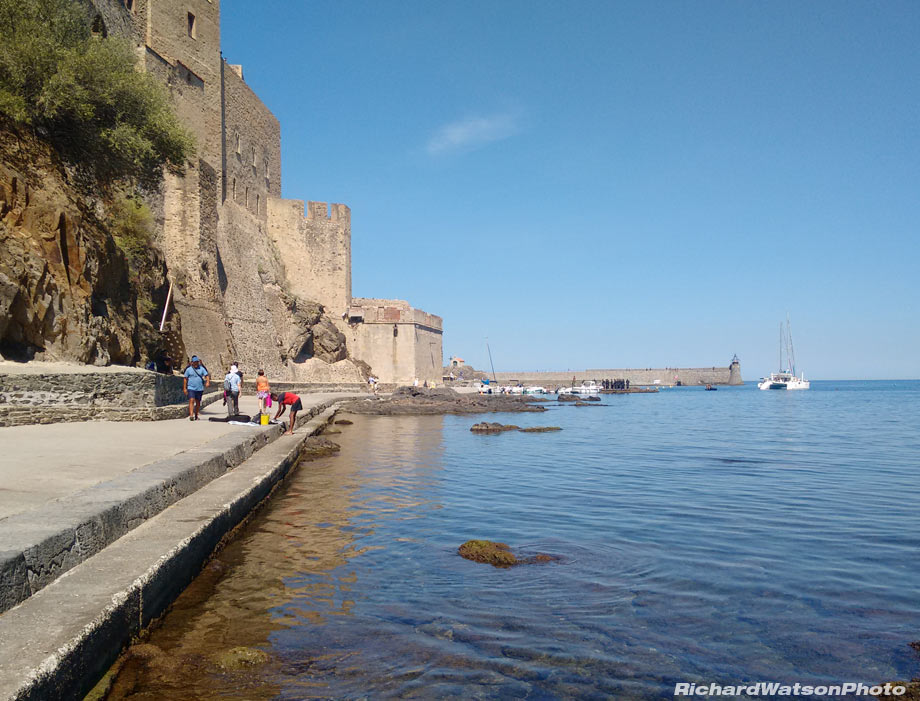 The tour was divided into 3 blocks of four riding days, with two rest days; very like a mini Tour de France. Each four day phase had a very different feel for me. Phase 1 was definitely about adapting and overcoming, getting stronger, and also getting accustomed to the daily rhythm and hotel routine and to my fellow riders. 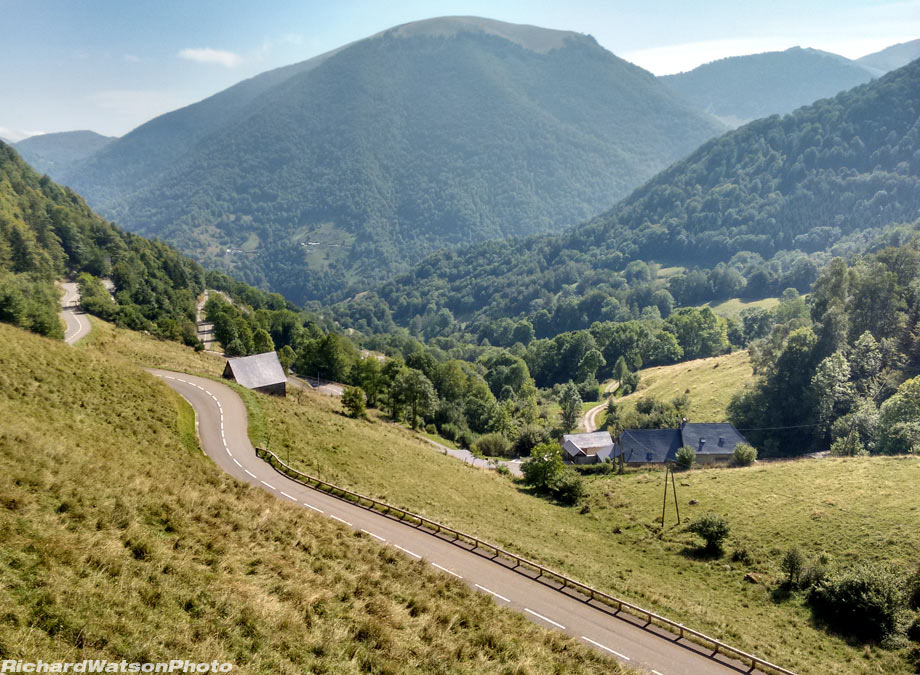 Phase 2 saw us heading westwards back to Biarritz via the higher mountains and the iconic climbs like the Port de Pailheres and the Col de Peyresourde. I certainly got to understand my strengths (descending, endurance, finishing the day strongly) and limits (climbing speed). By the second rest day at St. Lary we were only half way back to the Atlantic. I’d become accustomed to 60-90 minute climbs, often with long spells out of the saddle in my 34×29 gear as the gradient hovered over 8% for kilometers at a time. I enjoyed the beauty of slowly unfolding scenery and then the relief of finally reaching the top and heading to the van for much needed refreshments. The payback for the slow grind uphill was the exhilarating descent on uniformly excellent roads – what a blast! 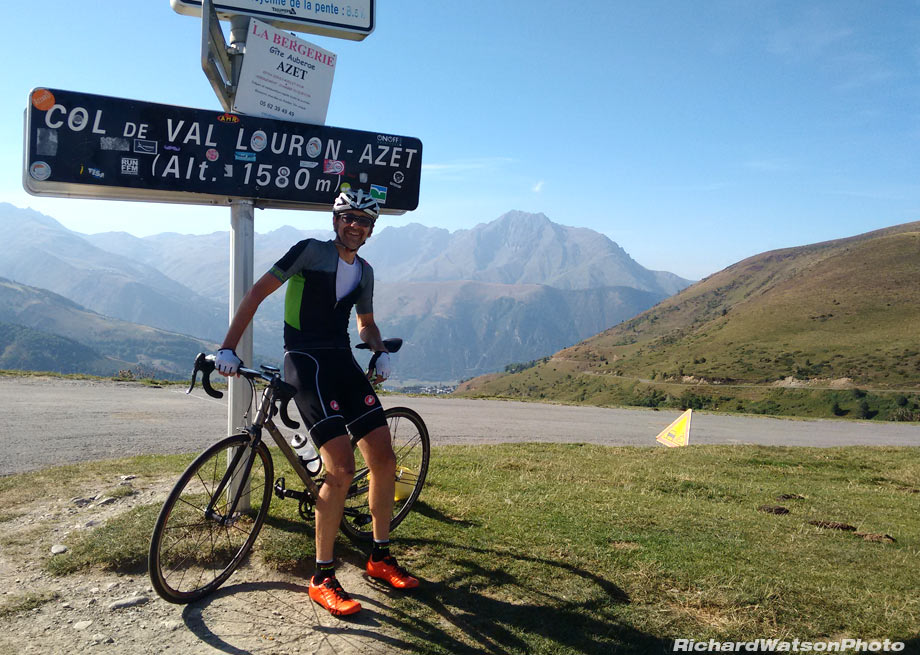 I was definitely in the zone by the final four day block. My body by now had completely adapted to the sleep-eat-ride-up-and-down-hills cycle. Which was good because it had some real challenges ahead. Stage 9 was probably the hardest and definitely my favourite. We tackled the lovely Col d’Aspin, the famous Col de Tourmalet, and the surprising Cirque de Gavarnie. The climb to the Cirque de Gavarnie is little known but is higher and a tougher ride than the Tourmalet, with an amazing view. Its obscurity is due to its location in a national park and so it is off-limits to races like the Tour de France. 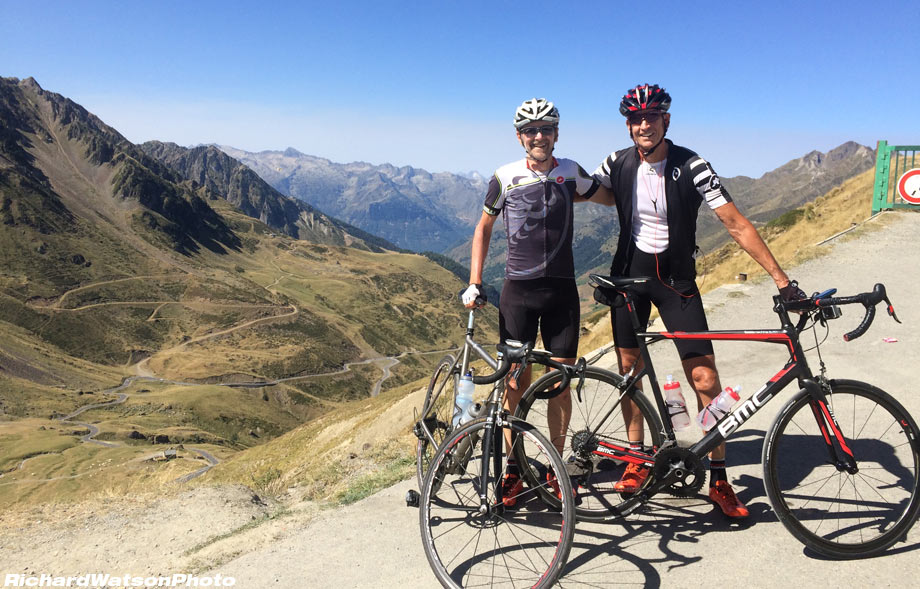 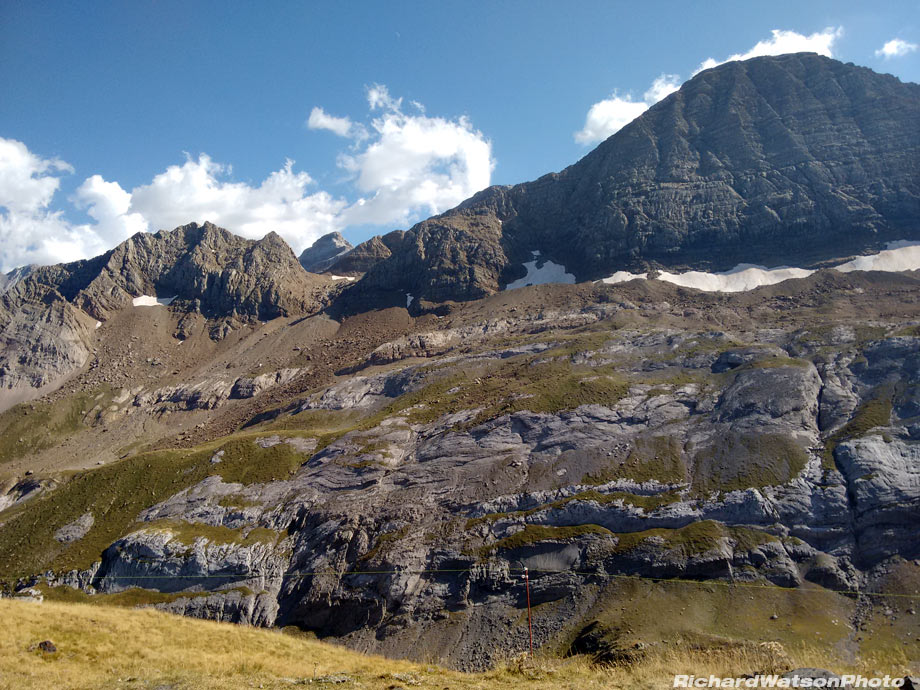 The rain returned for the following two days as we climbed and descended the Aubisque in the rain (again!) though from the east this time. The penultimate stage 11 was short but intense: it started with a magical but difficult climb to the Col de Soudet, followed by a sketchy foggy descent to the valley where we rode through a torrential thunderstorm. To cap it off we tackled the ridiculously steep Col de Bagargui with sustained climbing in the 10-13% range. 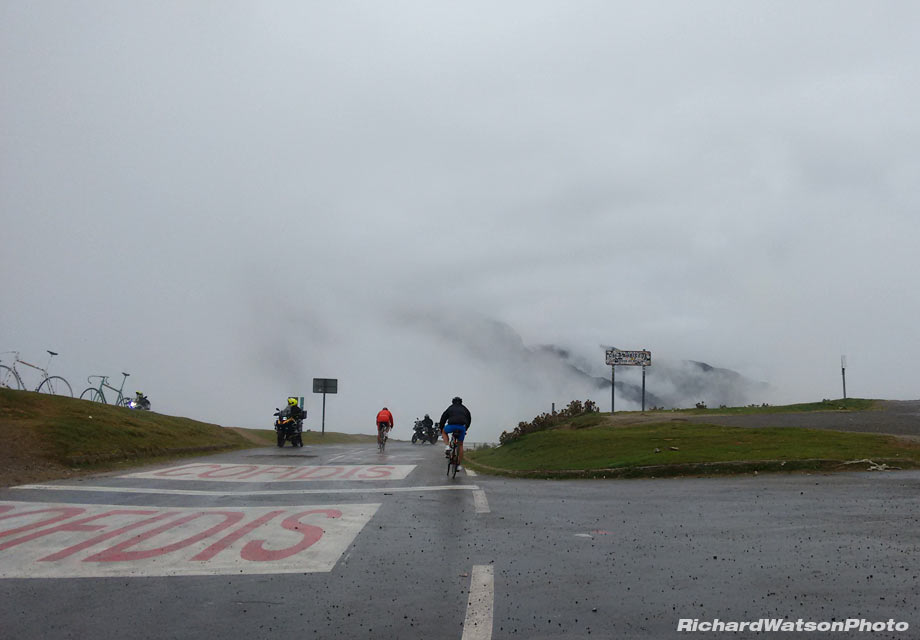 And then it was over. The final (thankfully sunny) stage took us over some lower cols in the green and moist Atlantic Pyrenees, including a delightful excursion over the border into Spain. Our host at the Hotel au Bon Coin, Dominique, welcomed us back to Biarritz with beer and an excellent Basque cake. We sat together at the hotel’s sidewalk tables, with the Vuelta playing live on the big screen inside the bar, and I experienced a strange mix of emotions. Pride in the accomplishment of a long held goal, pleasure in reliving some of the highlights, and sadness that this magical cycling life must come to an end. I think everyone felt that they could just keep on riding. 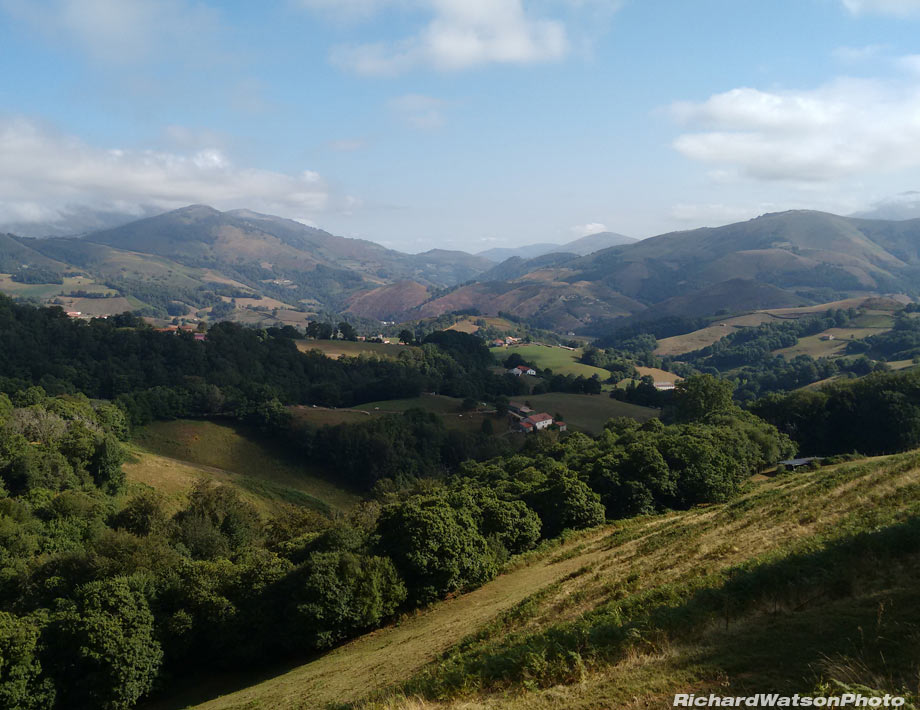 It’s a couple of months later now as I write this and some of the memories of the trip have faded. But there is much that is indelibly etched into my brain: the wonderful and sometimes challenging climbs too numerous to list here, the ripping descents, and the quiet roads through stunning scenery and little villages; the times I really suffered and the times when I was “in the zone”.

Reflecting on the tour experience I realize that there were three key features (apart from the fantastic climbs and countryside which strangely I took for granted) that were non-negotiable; the absence of any one of them would have severely diminished my enjoyment and satisfaction. First and foremost were the long days on the bike. I didn’t travel halfway around the world for a taste of riding – I wanted to be immersed. Secondly: no transfers. We rode each day hotel to hotel without having to get in a bus or van. And finally the constant presence of the van with access to food and clothing and (when needed) encouragement.

Sharing the tour with the other riders enriched the experience immensely, and I’m talking about more than just the on-the-road camaraderie (and at times competition). I particularly enjoyed the regular ritual of arriving at the hotel, climbing off the bike, and just relaxing at the van sharing a beer (or two) and reliving the day’s exploits. Mealtimes were a great time to get to know each other a little better.

Like a professional riding a grand tour, my Pyrenees tour experience has had a long term physical and mental effect. Beyond the great memories I now have a deep confidence that can only come from successfully completing a difficult challenge. Whatever your reason to ride a tour like this, and irrespective of your doubts, if you meet Allan’s selection criteria then my advice is “just do it”.

• For more info on this trip visit FranceFromInside.com