Next week the 100th edition of the Giro d’Italia opens with three stages on the island of Sardegna – and then quickly logs a rest day to transfer to Sicily at the tip of the boot.  I was there in 2008 for the Big Start (that’s Italian for “Grande Depart”), and spent a few nights in Palermo. Both the city and island were unlike any other place I’ve visited in Italy, and after my initial shock, my fondness for the place grew ‘con molto veloce’.

Here’s a look back at the sights, sounds, and smells I noted as I settled in for the start in Palermo…  Bear in mind that it was written almost 10 years ago and a lot has changed in the world – of technology – and cycling – so some of my references may seem … well, dated.

May 2008: I’m setting off to explore a new part of the world, chase my favorite Grand Tour, and live the life I so long dreamed about in the days B.P. (before Pez). It’s my first trip to Sicily (a rather tricky word to spell out on the keyboard…), and my excitement to see it has been on a constant burn since the Giro route was announced in December. Mrs. Pez’s own bloodlines hail from Calabria, where stages 4 & 5 will run, I’ve spent hours planning my daily itinerary, which rides I can do and still make it to the press room in time for the finish, the logistics of chasing the first 7 stages of the race with minimal time spent trapped in the car, sourcing hotels with reliable internet that don’t cost a bundle, choosing overnight towns, pouring over the maps plotting the fastest route for each leg of the journey. 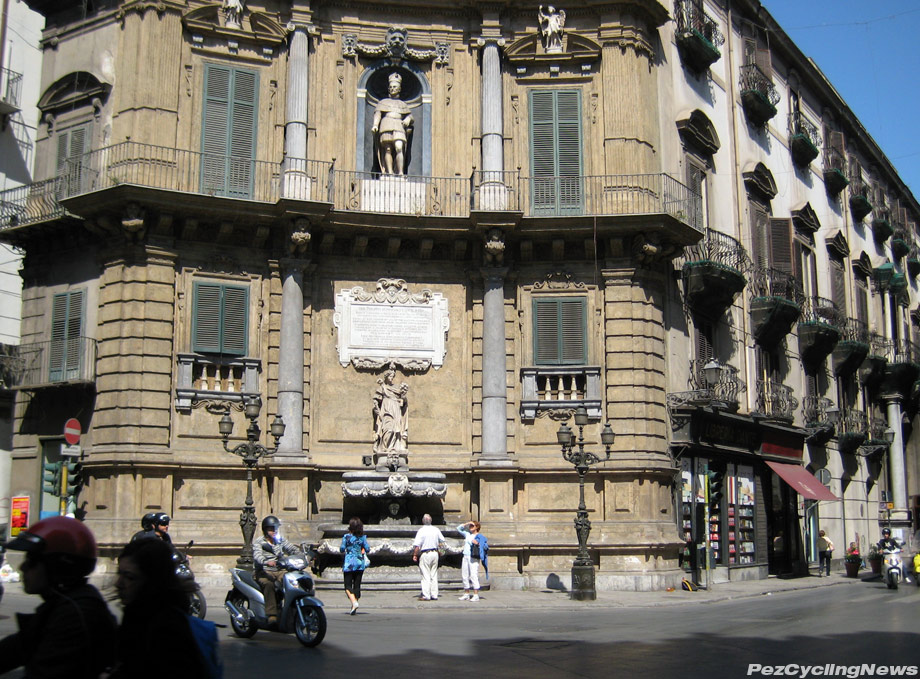 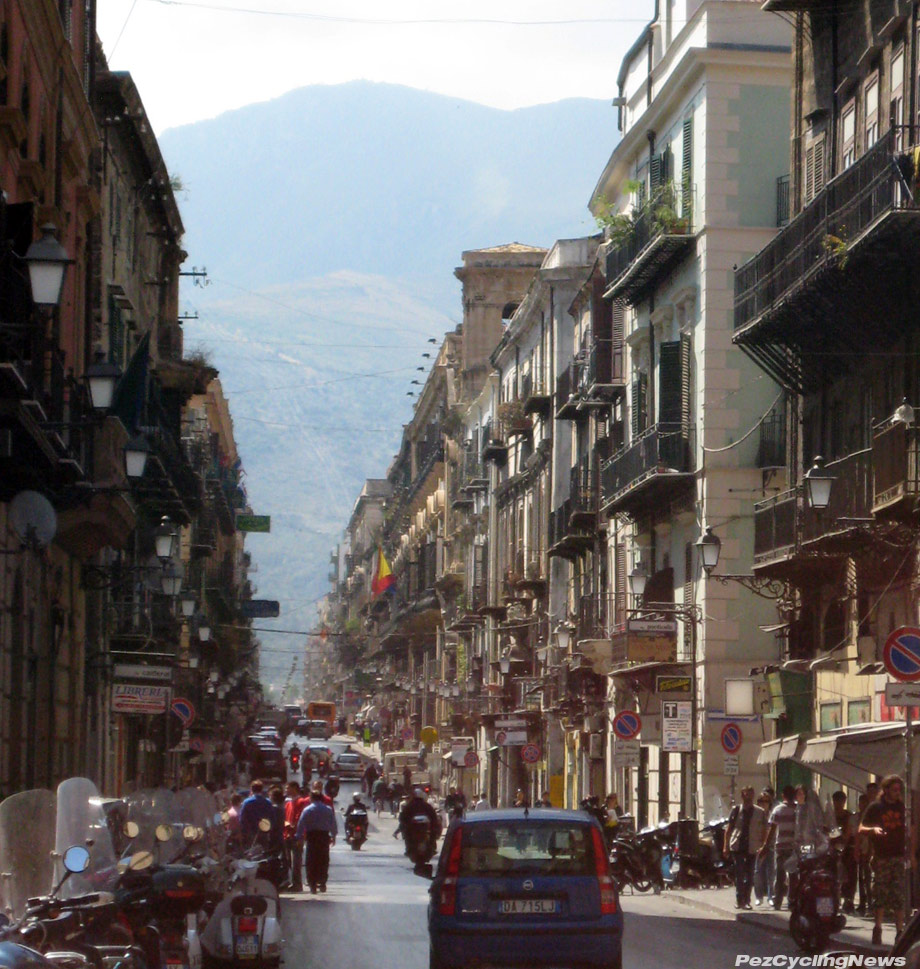 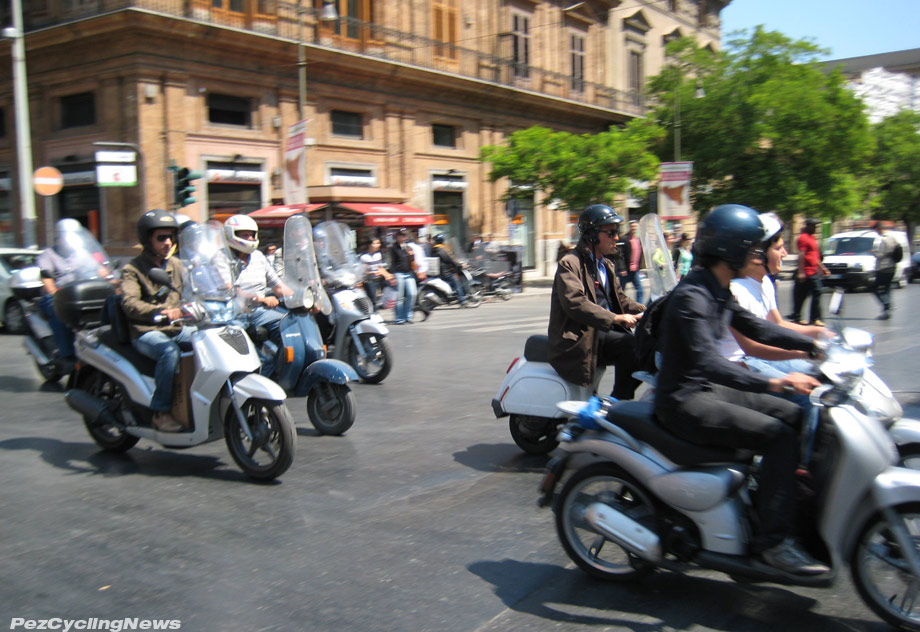 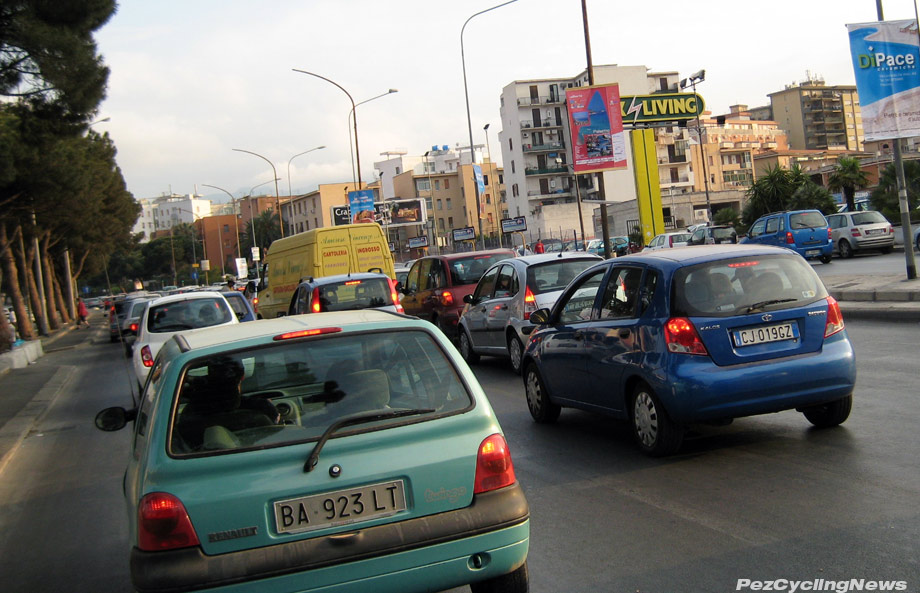 I’m just 5 minutes in the car and already a traffic jam.

I arrived at my digs not long after, the B&B San Gabriele, to discover the sea view from my room had been replaced by scaffolding. It seems whoever controls the scaffold rentals here is doing very well, as at least half the old city is covered in the stuff… I imagine the restored city is gonna look darn nice when it’s done. 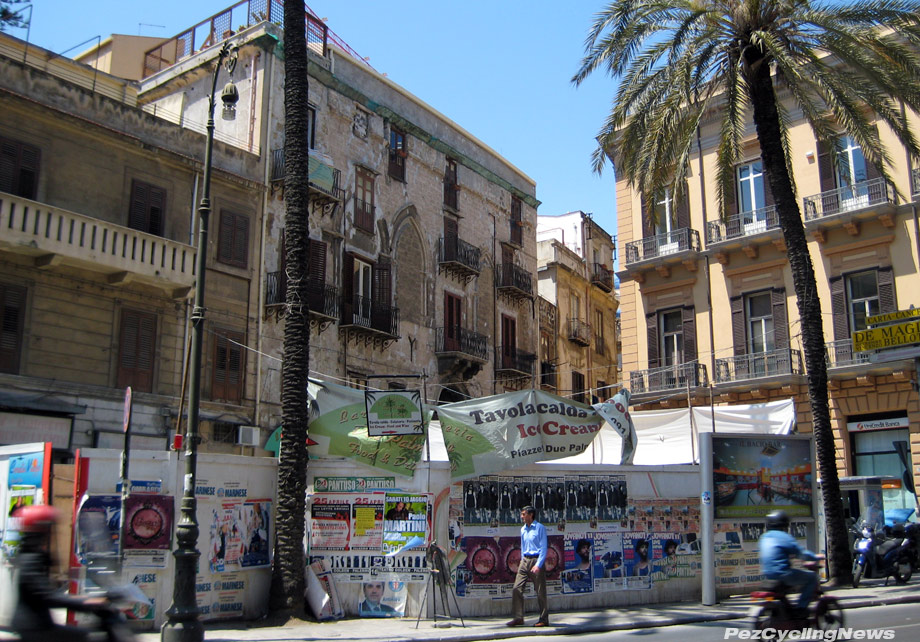 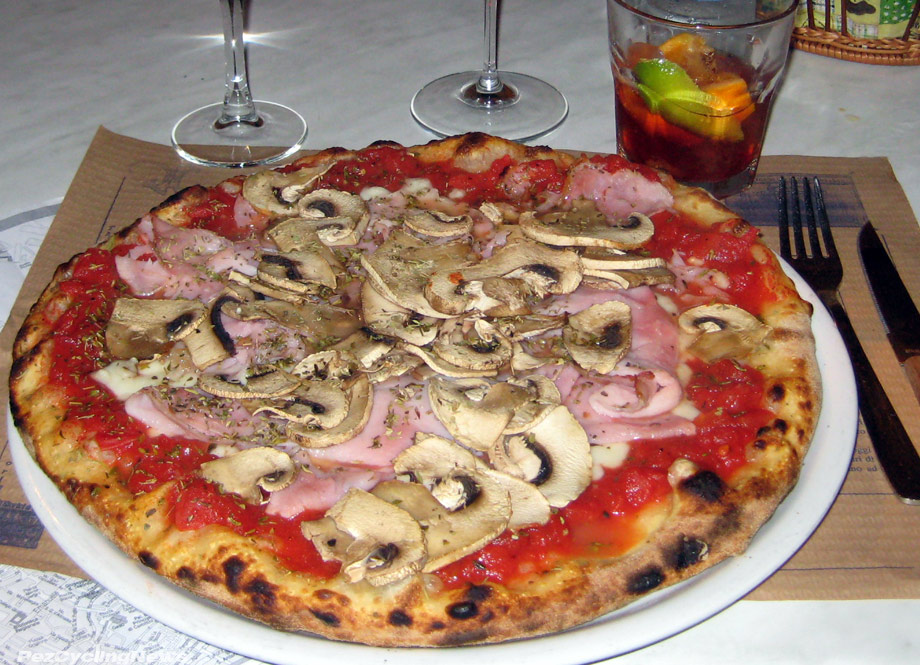 The next day..
It’s like the day before Christmas around here as excitement is building to a fevered pitch for the start of tomorrow’s Giro d’Italia. I’m doing my best to keep up with all the action and soak in the true Palermo experience. I took a spin on the TTT corsa, and can tell you it’s gonna be fast. 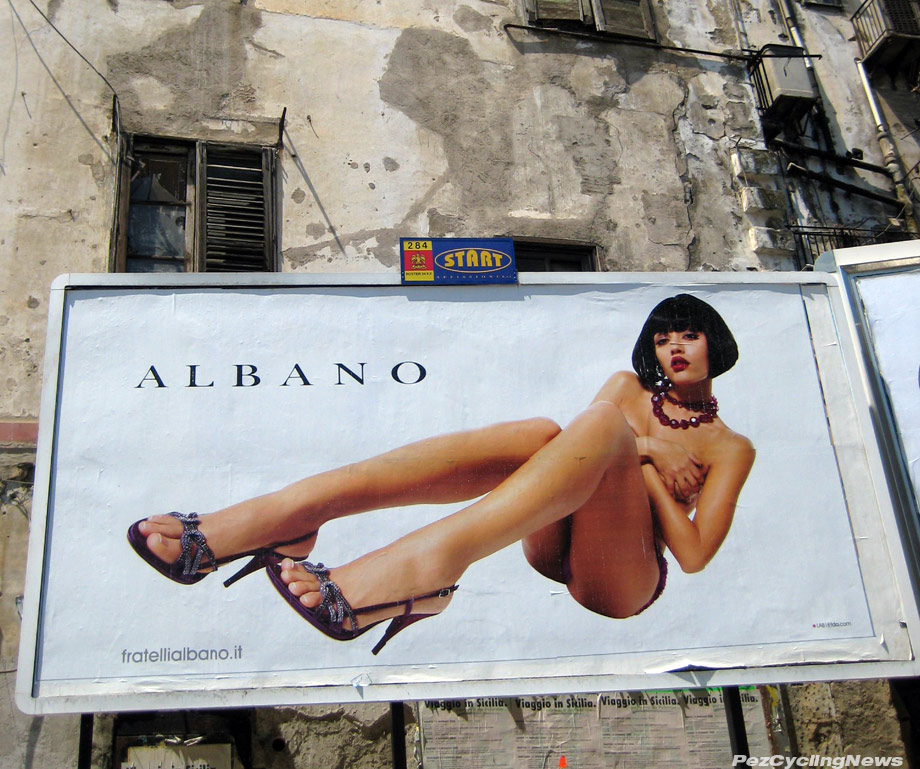 The really big news though was the arrival of my luggage on Thursday – only 4 days after I left home…! It’s all worked out as I finally bagged about 10 hours sleep last night (after a couple nights of only 3 hours per night) – and I although my brain fog has not quite lifted, I can see some light ahead. 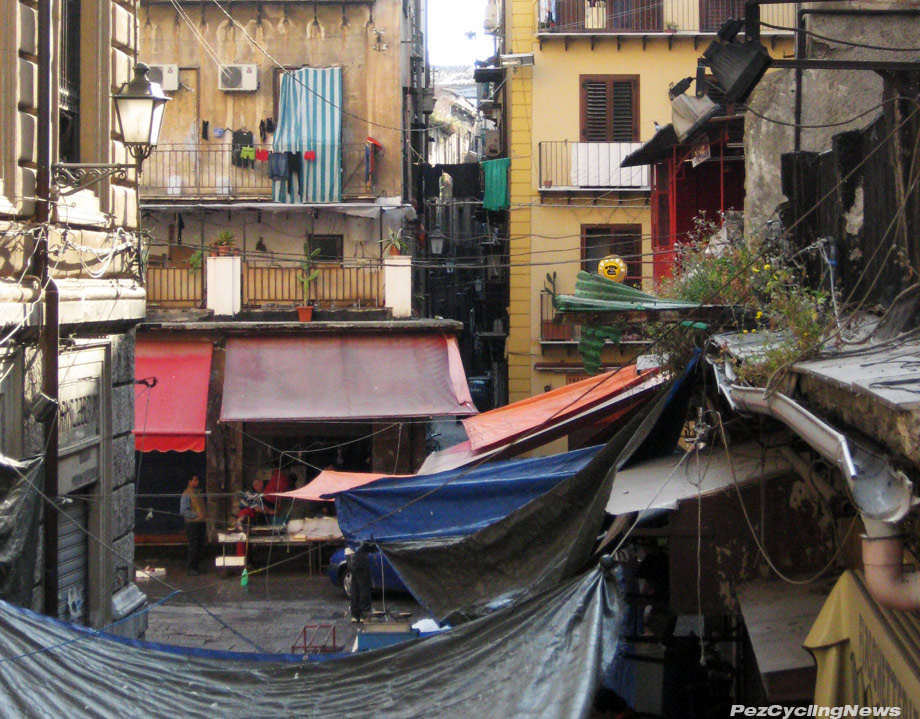 You better not have any “I need my space” issues living in Palermo.

But the past two days have been put to good use – I finally got my very own Italian cell phone – so no more $600 phone bills from my mobile provider back home… I’m still getting used to the Euro-ringtone though, and have missed a couple calls because I just ignore it… 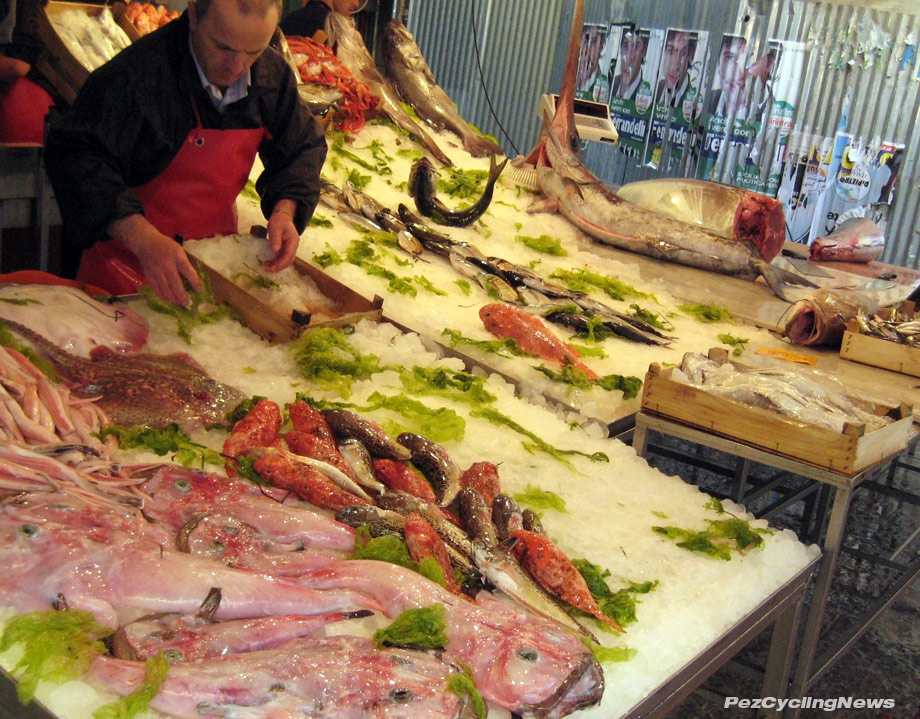 I took a stroll around 7AM yesterday AM, just in time to see the local fishmongers preparing the day’s catch. The smooth stones on the floor of this square were washed down and slippery, but the ‘scent’ of fish was unavoidable. Aside from a few old men just sitting silently, the local cats were the first hopeful customers. 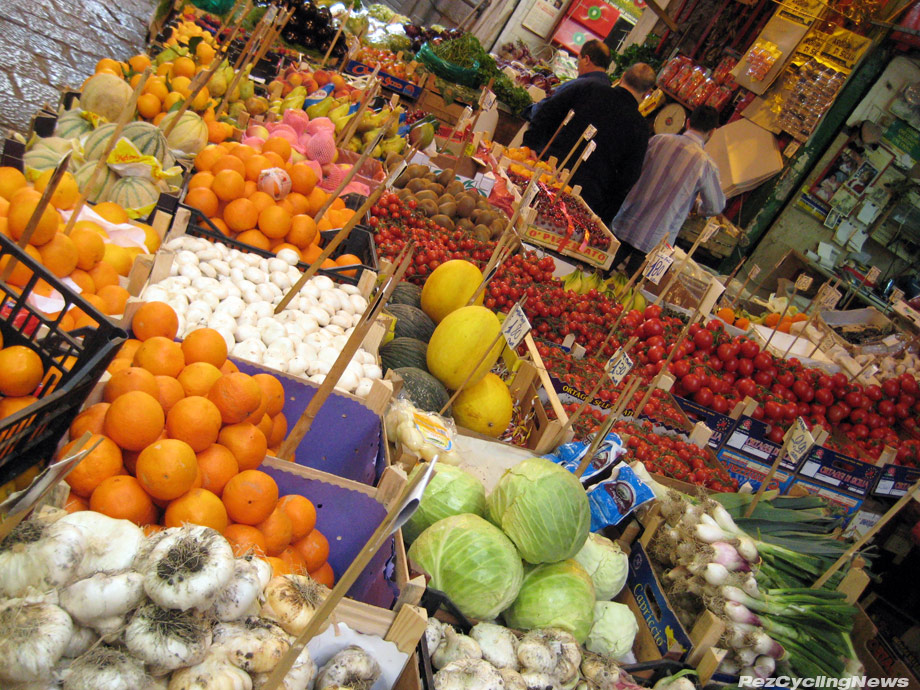 Just off the fish square, along a tiny street, other shop owners rolled up the shades for another day of neighborhood commerce. There’s no way this produce sat on a truck for 2 months on its way here.

Onto the corsa – Thursday was a busy one – picking up the creds in the AM, then building the bike and onto the corsa on the afternoon, and the team presentation last nite. Lot’s of pics to edit and then today I rode up Monte Pellegrino with it’s stunning veiws of the city and sea. 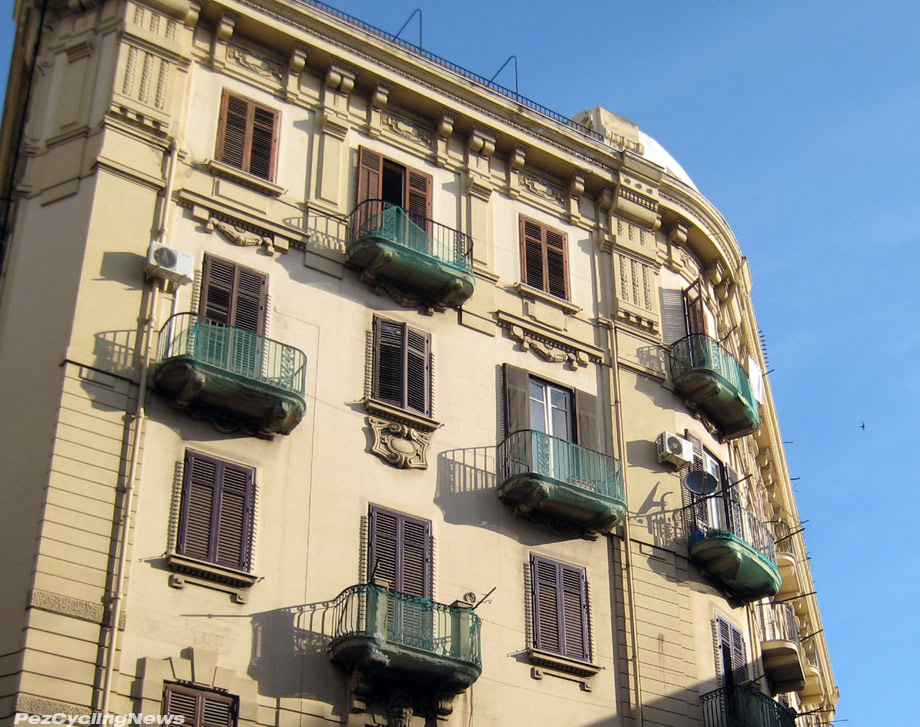 The stage starts on ends in the town center, at two large piazzas. The start is straight out along the Via della Liberta – a pretty wide boulevard (at least by Palermo standards) on flat roads. 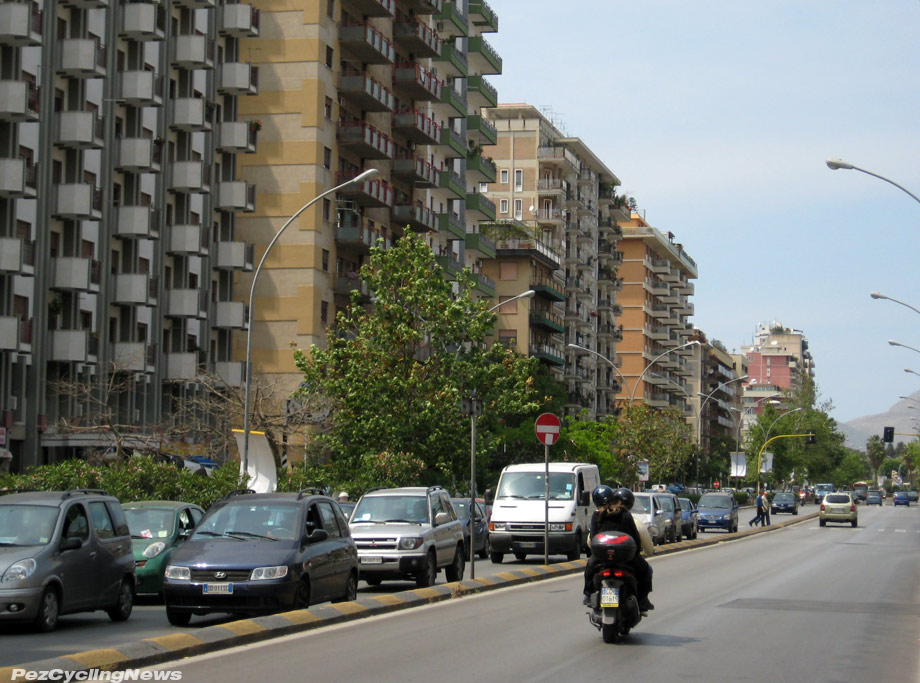 The endless rows of 1950’s style apartments at least offer some big views of the start straight.  They dropped a lot of bombs here in WWII, and it’s easy to see where based on the apartment blocks. 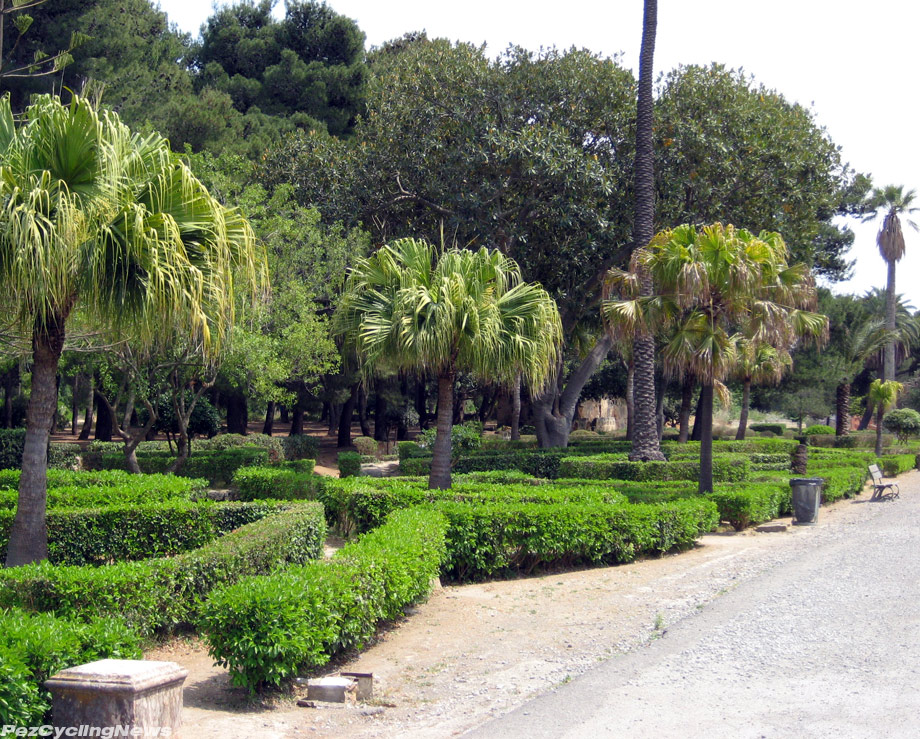 The Parco della Favorito – looks like a nice place to visit. 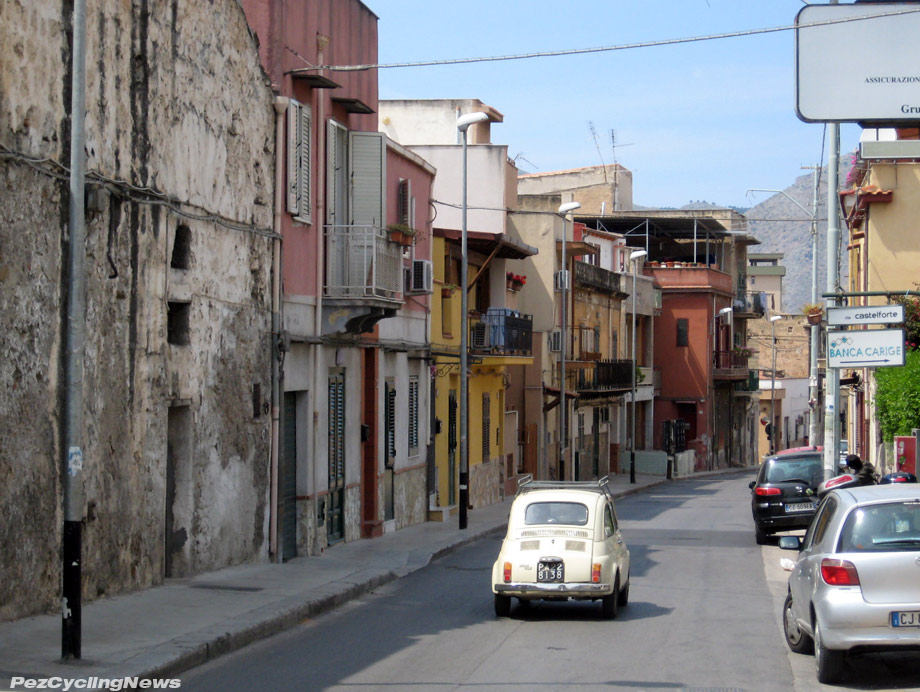 The roads at the north end of the corsa get narrow and bumpy. 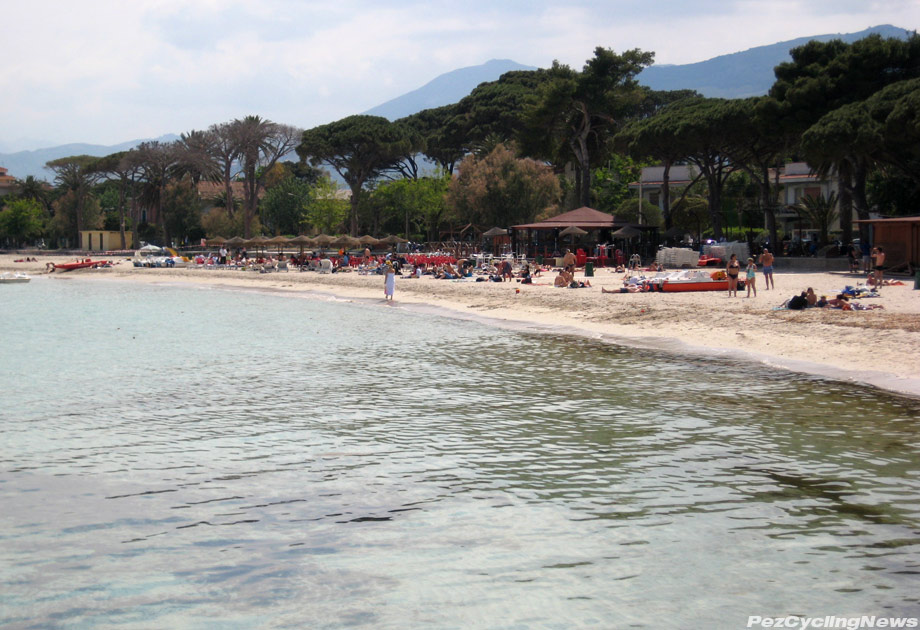 The beach in Mondello is an obvious draw for touristicos and Giro journos alike.
The first time check and return legs starts at the beach town of Mondello. It was full holiday atmosphere here, with horse drawn carriages, bands playing, and lots of boats. 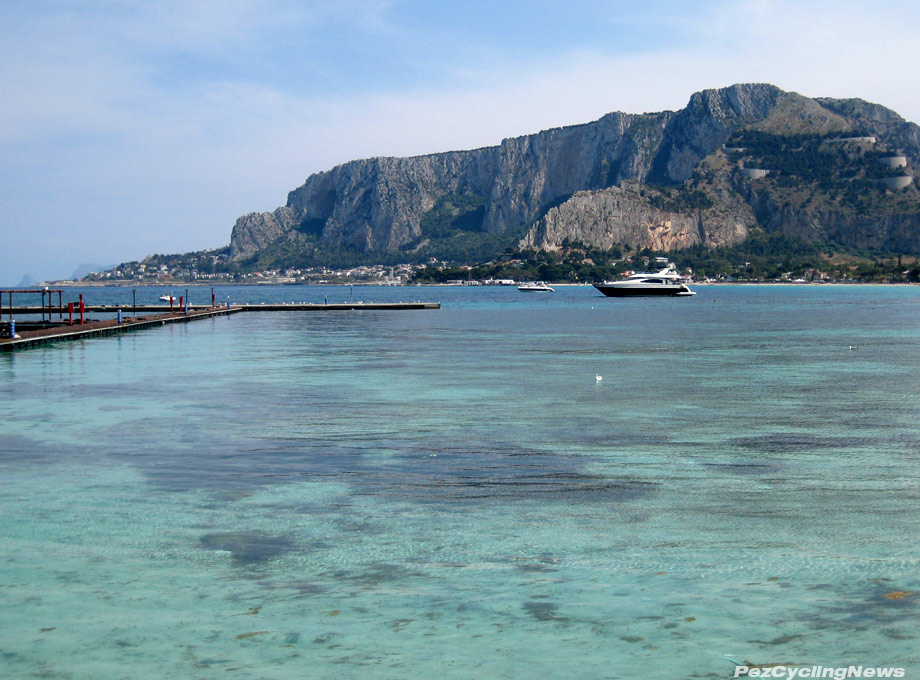 The water is crystal clear and taking a dip was darn tempting. 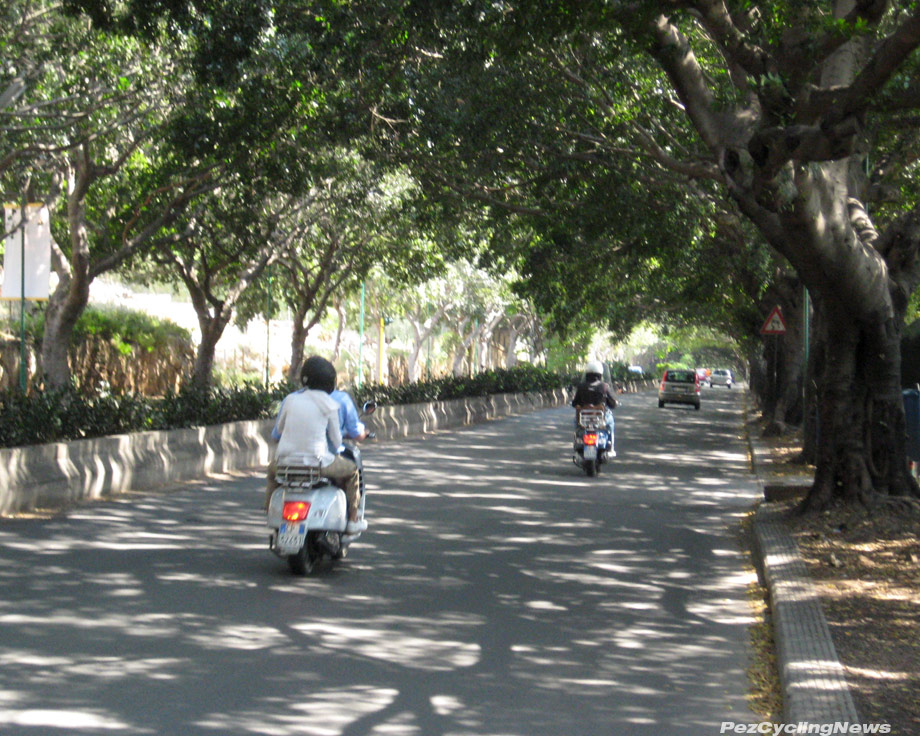 The only real ‘hill’ on the course runs about 500meters along this completely shaded lane. The gradient is slight, so don’t expect anyone getting dropped. In fact it’s so sheltered in here, and the roads so smooth, speeds should remain very high. 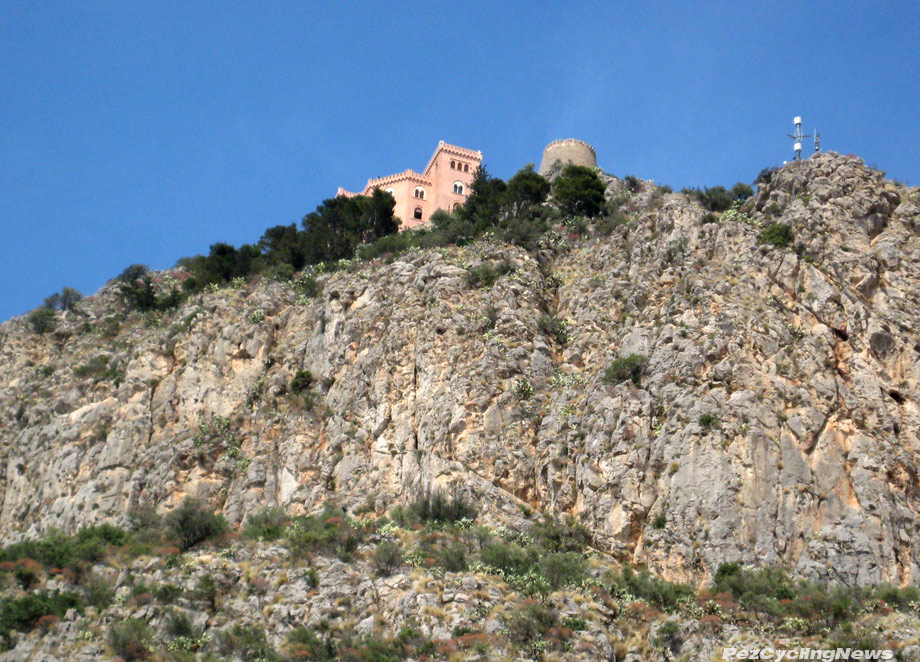 A quick look up and to the left reveals just another majestic castello . 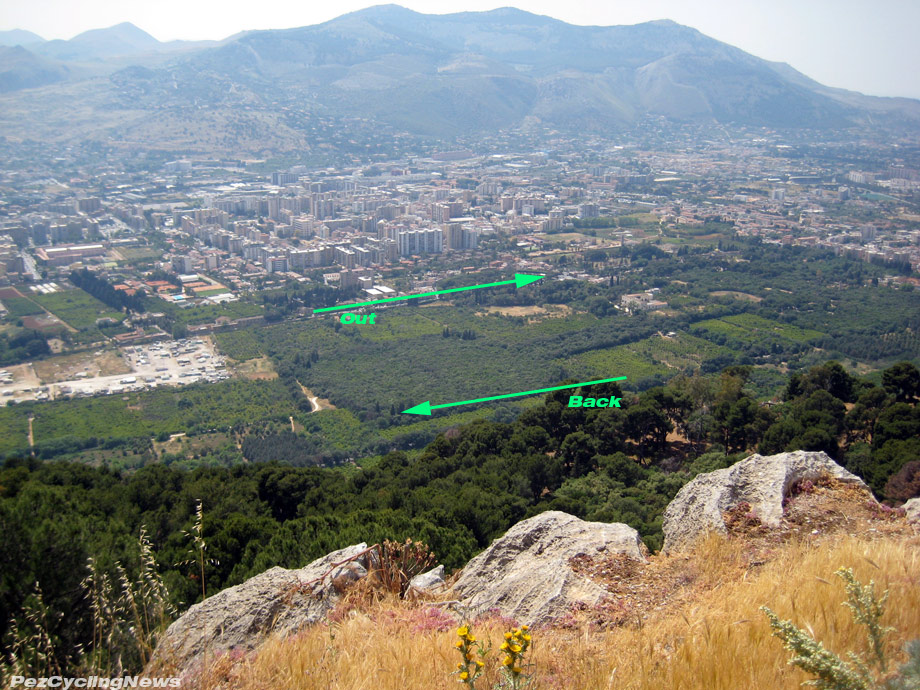 The run past Parco della Favorita should be a fast one. I had a tail wind on the way out, and the blast back is sheltered by Monte Pellegrino. The only obstacle should be the unexpected (expected?) ladies in their heels and short skirts skattered along the return leg. 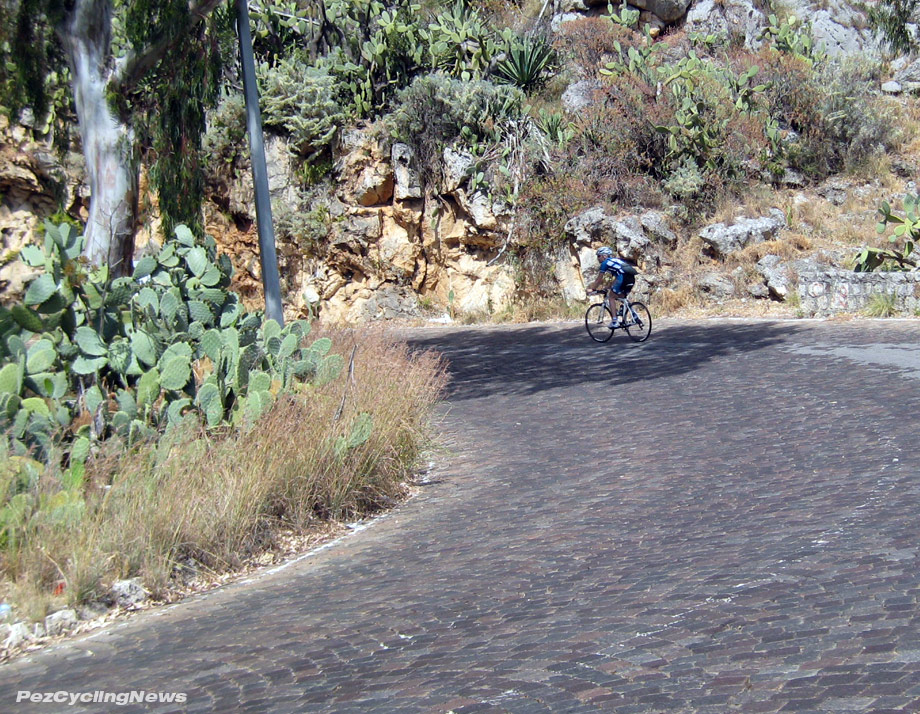 My ride today up local Monte Pellegrino was worth the effort of a jet-lagged 30 minute climb. The grade was around 5-6%, lots of switchbacks, and outstanding views from the top. 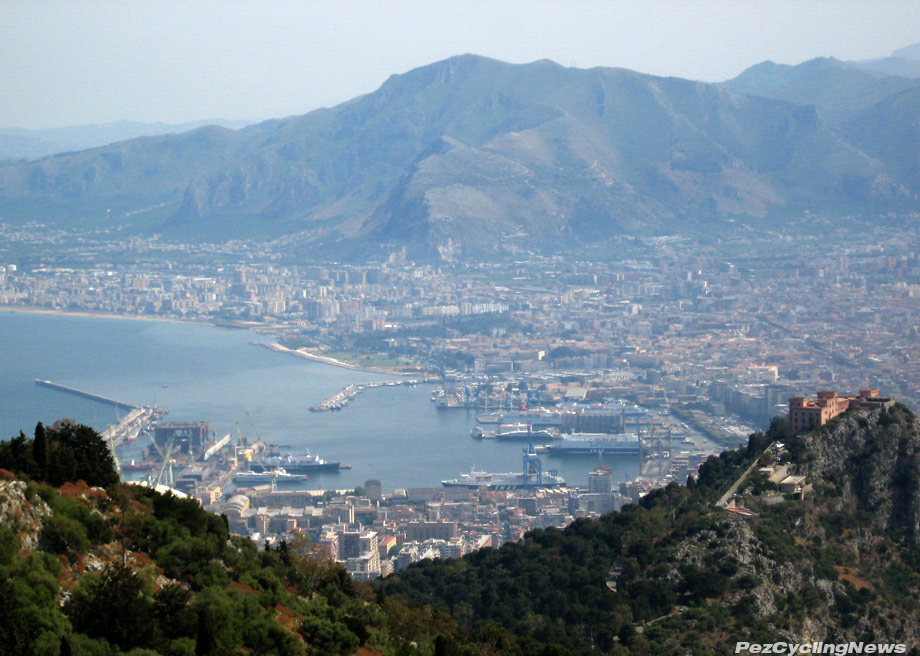 Suddenly the congested and crumbled bits of Palermo take on a whole new look. Much of the waterfront is not really accessible, and the real heart of the city is a few blocks inland. Seems like a waste of a gorgeous harbor if you ask me. 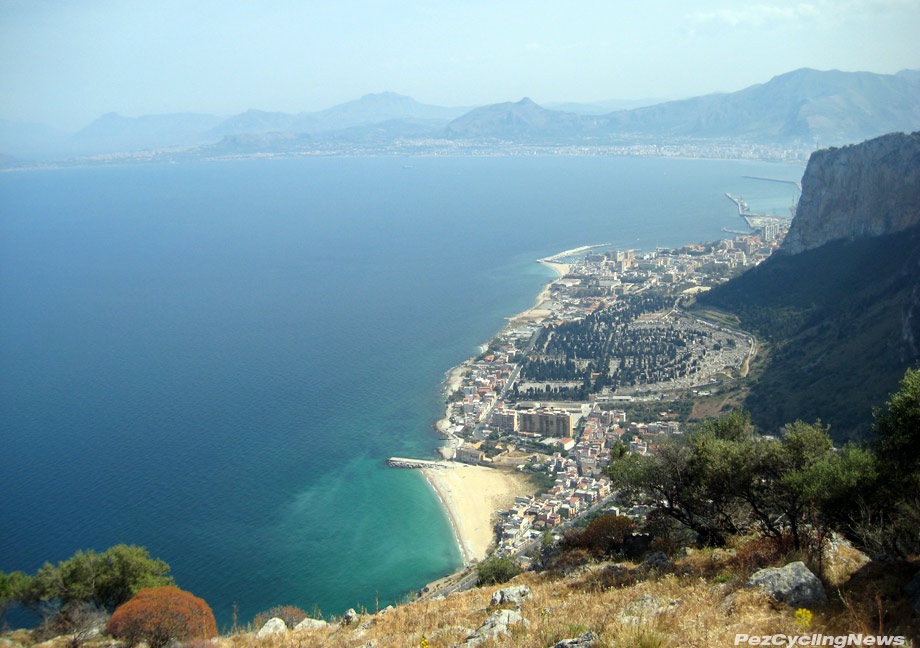 That’s it for this edition of Giro di Pez – my mission to find the perfect negroni continues this evening after a couple days off to really get my Sicilian/ jetlagged feet underneath me… It’s time for a shower and dinner, and hopefully another full night of rest for my final prep before tomorrow’s grande partenza…

Keep it dialed to PEZ and see you domani!

EUROTRASH News Round up Monday!