“Spectating at Il Lombardia” was the subject of the email from PEZ-Fan Ron V. looking for tips on following the best one day race of the season (if you ask me). I had the perfect itinerary for him – since I’d done something very similar with PEZ-man Alessandro back in 2015. With the rescheduled Lombardia on Saturday, August 15, here’s a nice little read and photo book that I think captures the length and essence of beautiful race in a truly spectacular setting.

——–
My second time back in two years – Il Lombardia was better than ever, with great racing, epic weather, and a course around Lake Como worthy of this Monument –  my day chasing the race was a fitting end to the 2015 race season. 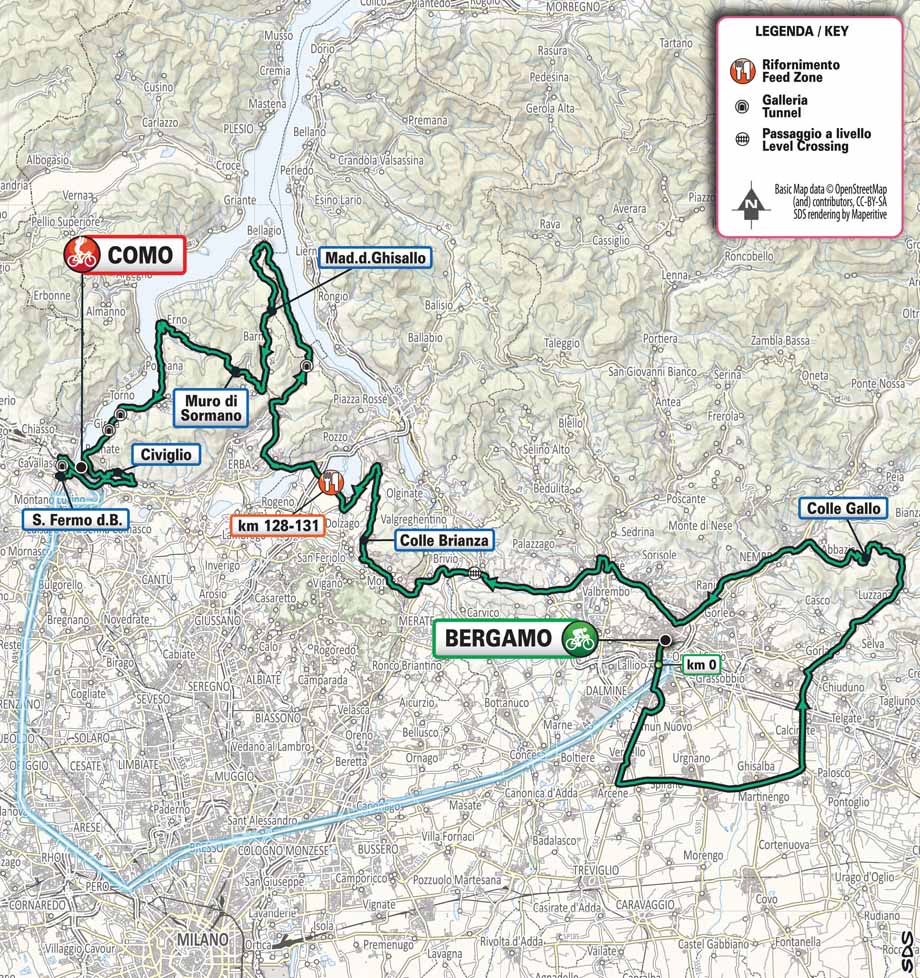 The 2020 Giro di Lombardia starts in Bergamo and twists, turns, climbs and descends its way to Como, following a similar route to my chase in 2015.

After seeing and chasing the race last year for my first time, the question was how to do it differently this time.  The simple answer was to join up with PEZ-Man Ale Federico for a day on the roadside.  After some 10 years of working together on PEZ, this was the first time we’d actually team up to see the race together – quite an accomplishment.  Ale knows the Italian races better than most, and as Roadside-junkies, we’re always looking for new tips and tricks from each other, so I was keen to let Ale show me the way.  We met in Bergamo for the start, and with a couple stops in mind, the plan was to see what we could accomplish, and what adventures awaited in the next 8 hours. 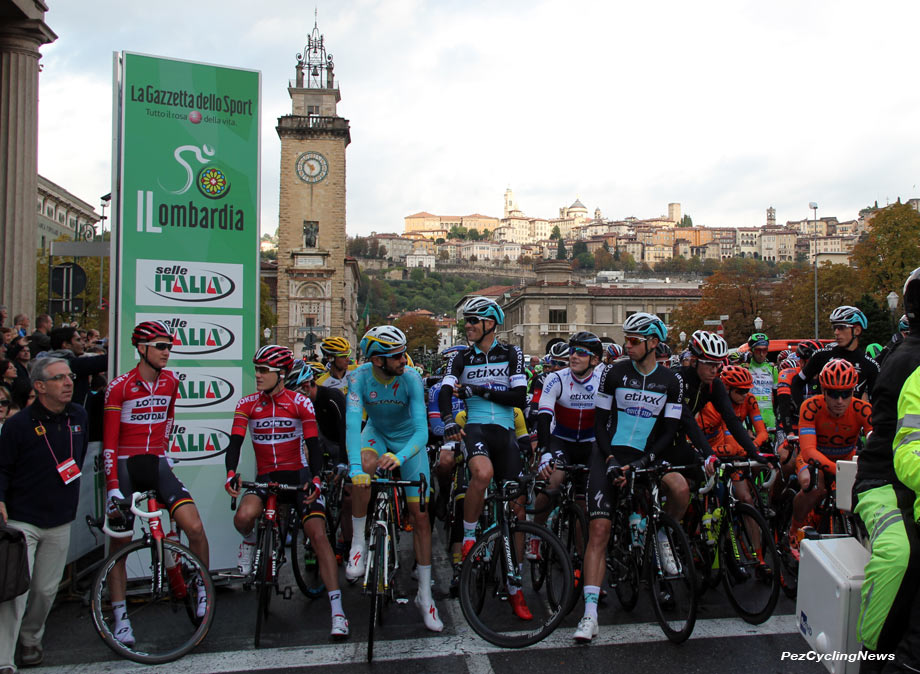 In spite of the season being long, riders fatigued and only a few with motivation to really race, spirits were high on this ‘last day of school’.  Crazy weather in recent days set the stage, as rain came through in the night, but a break in the clouds meant a dry start – thanks to the weather gods for that as heading out on a 250km jaunt and being wet from the start would really suck. 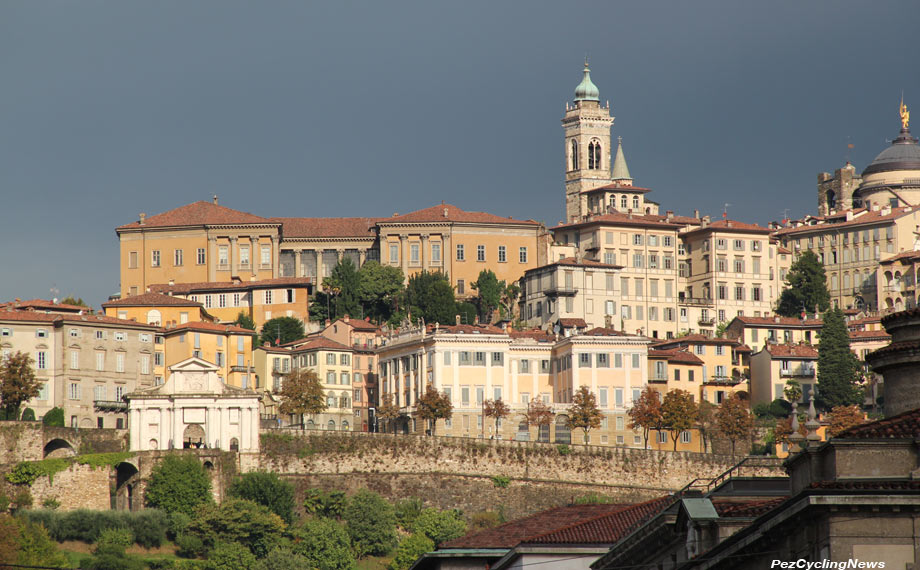 The sun even made an appearance, and a damn fine one at that, lighting up Bergamo’s old “Citta Alta” in striking fashion against the ominous dark clouds behind. 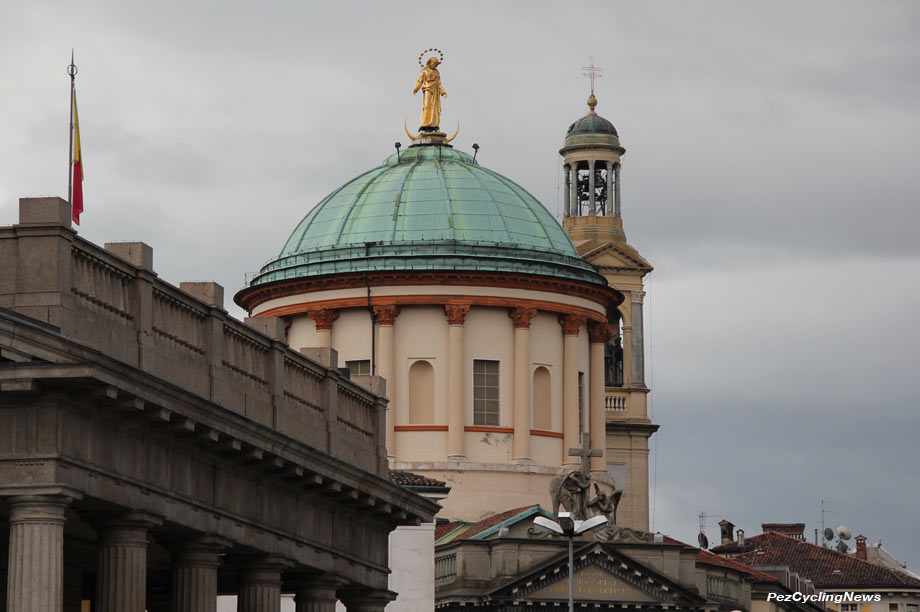 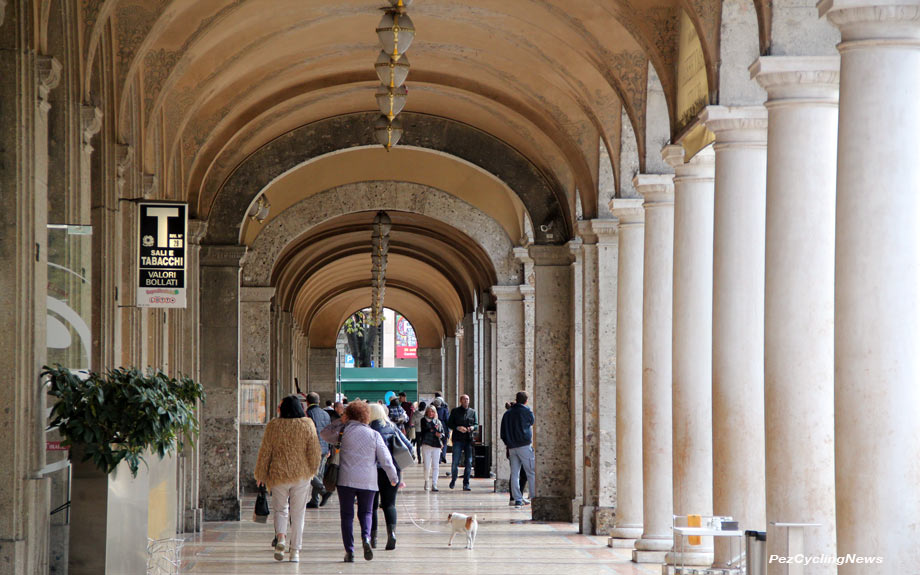 At 10:00AM Sunday morning things are still pretty quiet in town, but the city’s gallerias showed signs of life, even if many were oblivious to the 109 year-old bike race starting just meters away. 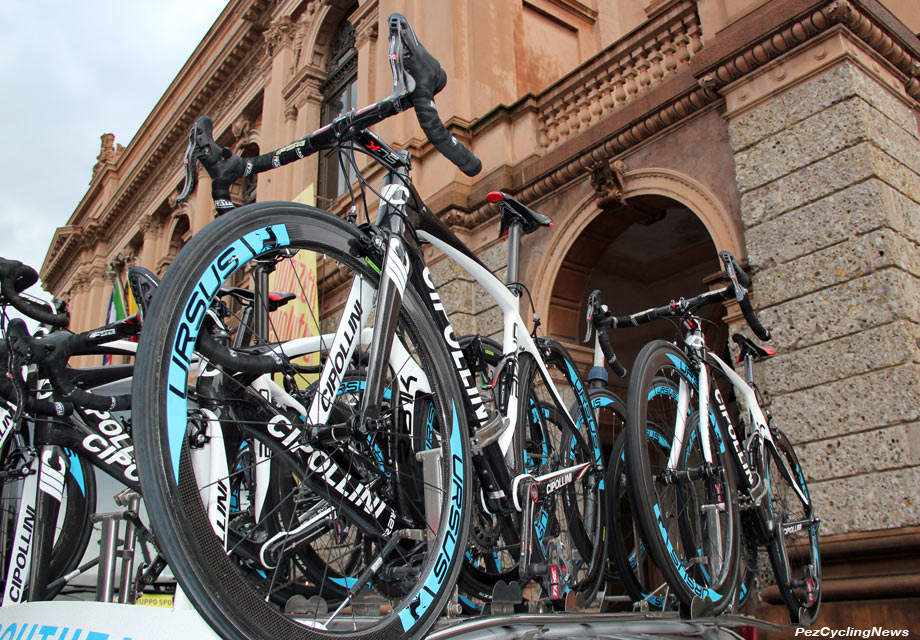 As teams began to arrive, it’s always de rigeur to drool at the shiny pro bikes, like Team Southeast’s Cipollini’s… 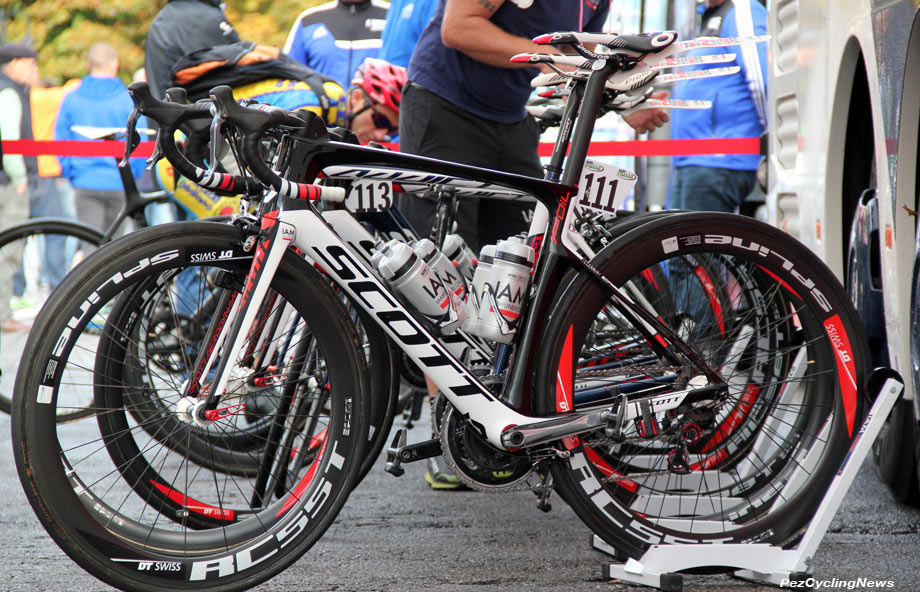 …and IAM’s Scotts. This was the one brand new FOIL on display, while the rest of the team were on Addicts. 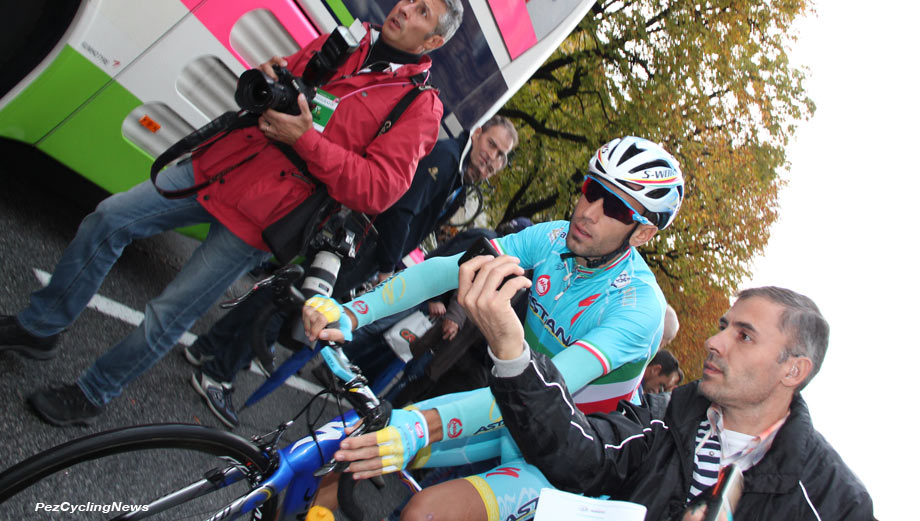 With sign-on well under way and ‘the voice of international cycling Anthony McCrossan handling the English language intros (read my review with him here), the big boys waited till the end to join the fray.  Man of the match was obviously Vincenzo Nibali, out to salvage his terrible season and put his embarrassing Vuelta expulsion behind him. With good form on the boil, the man to beat was in high demand for sound bites. 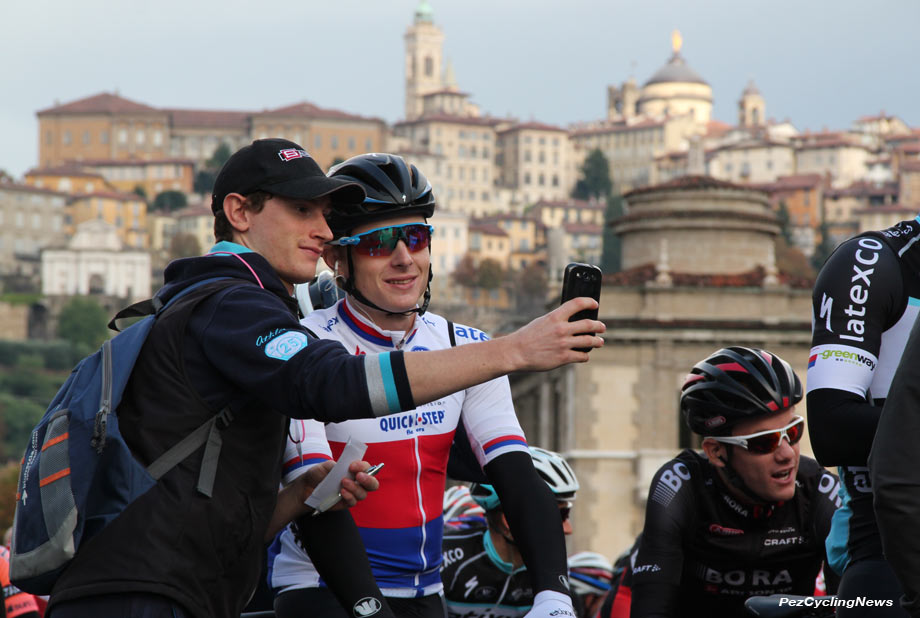 But aside from a few serious contenders, the mood on the line was relaxed and light.  One fan outside the barriers asked me if I’d help him get Davide Rebellin’s autograph, so I took his pen and paper, squeezed my way through the assembly of riders and shortly returned with the scribbled prize from the obliging pro, and making his day. 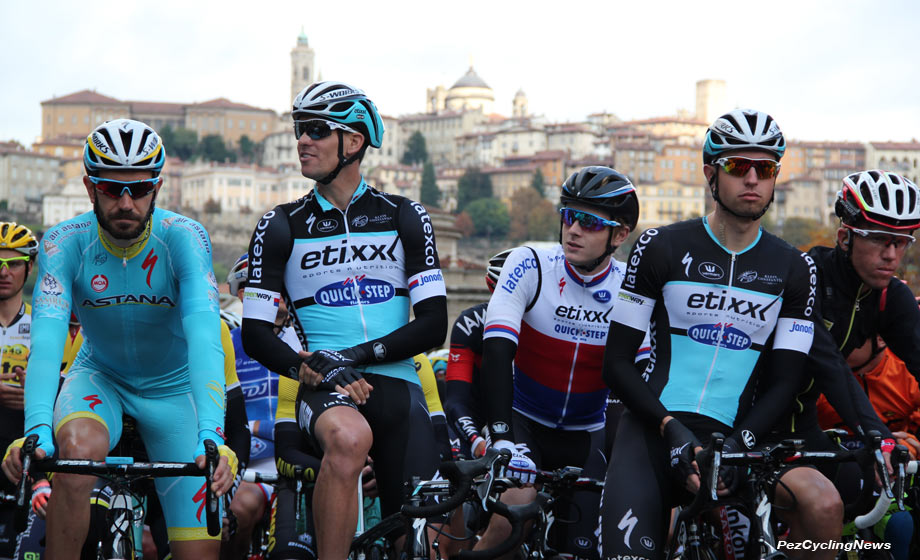 Round about 10:30AM, it was go time, and we joined the chase shortly after enroute to planned stops at Lecco, Onno, and one or more of the big climbs towards the end – the Sormano, Civilgio, and San Fermo. 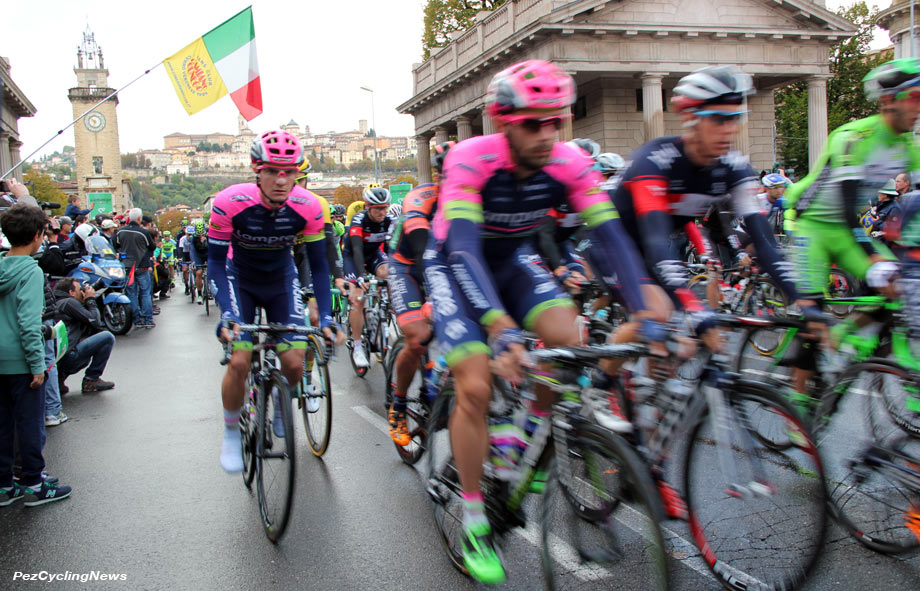 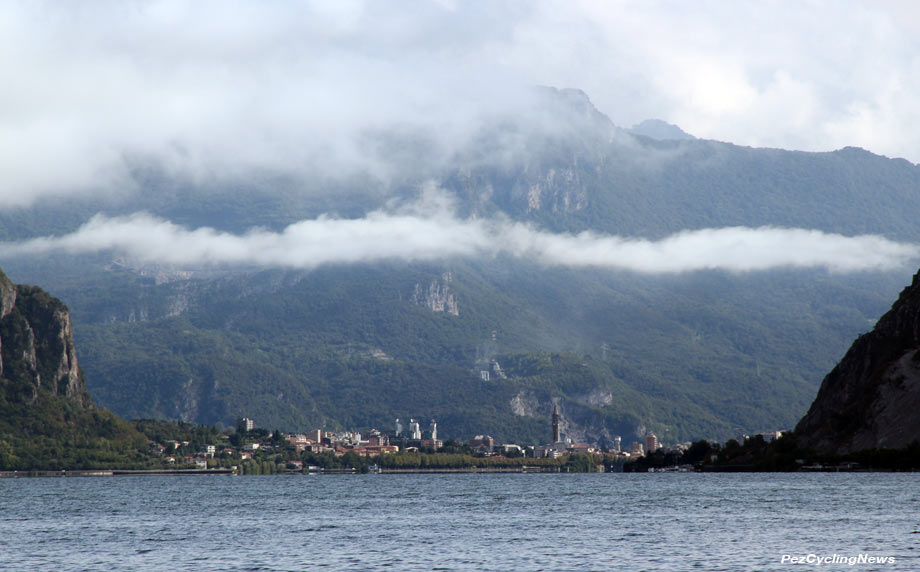 Our first stop was Lecco on the southeast end of Lake Como at around 100km to go. We could see the rain falling at the north end of the lake, and sure enough, the storm rolled in and drenched us as we awaited the race. 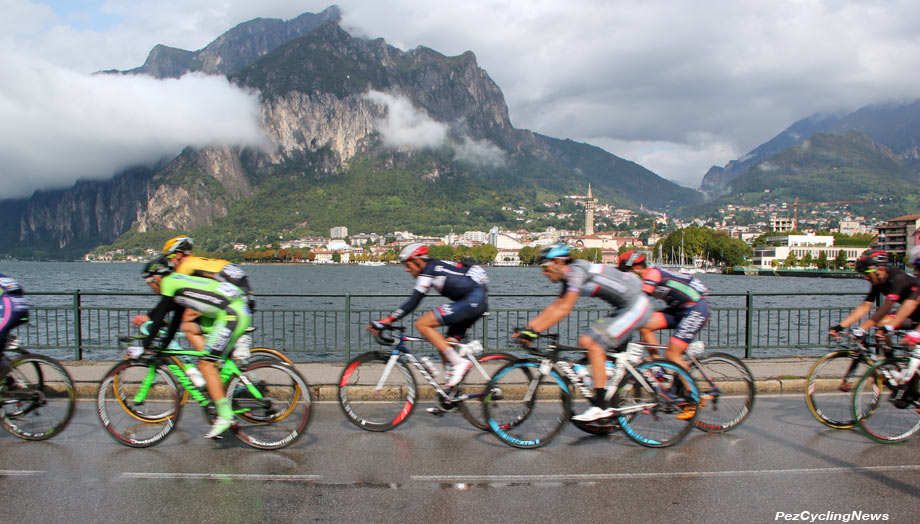 But when the break rolled through, things were looking up with real sun rays beaming down and hopes for a brighter day ahead. They had about 8 minutes on the pack which came through with Astana and Sky stringing everyone out – so much so that race fave Nibali was actually caught in a second group chasing from even further behind. 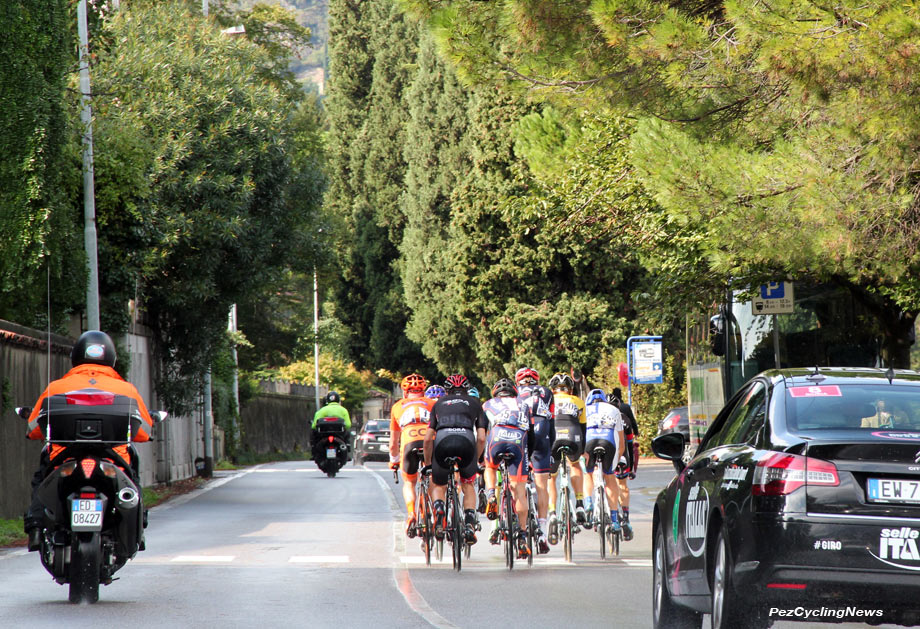 The race turned away from the lake, allowing us a chance to get back in front for another pass further up at Onno… 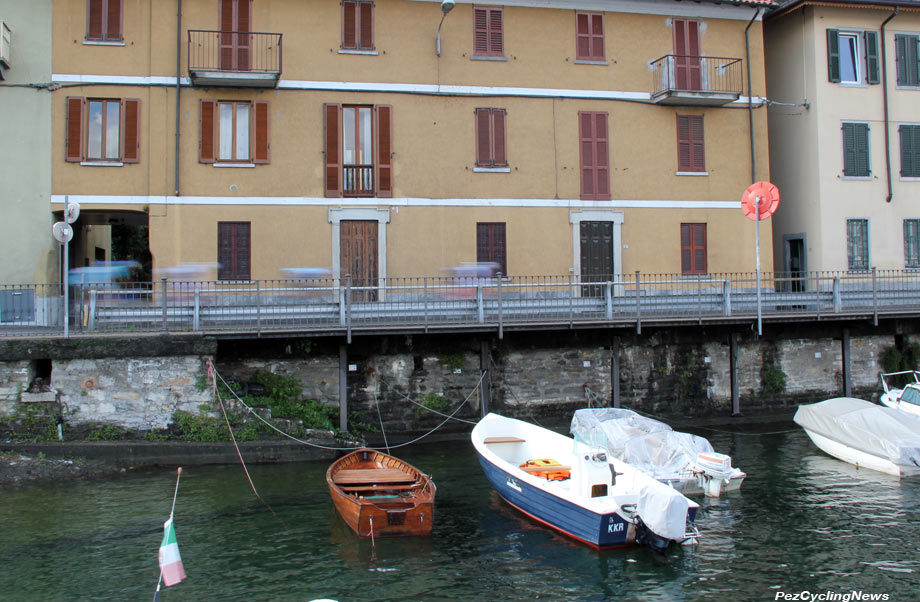 Always looking for ways to make my photos look different, I started playing around with slower shutter speeds to capture the speed and color of the riders, against some backdrops of typical homes on the lake.  And whattaya know – there’s Nibali as the last blur in the shot – still chasing, but with plenty of time to catch up. 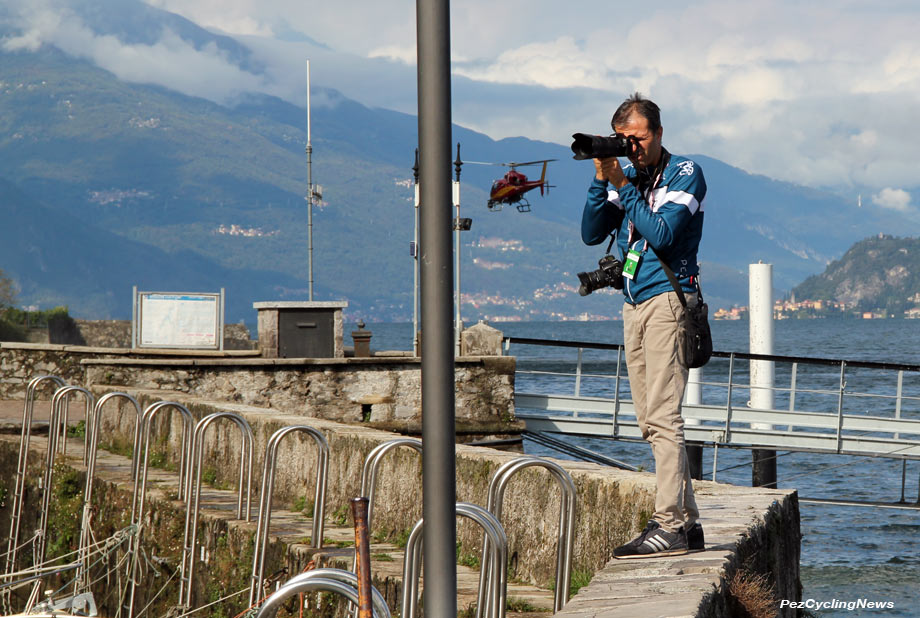 I had no idea how that shot of Ale would end up – he appears to shoot that pole, and with the tv helicopter seeming to get in the way.  You just never know what you’ve captured until the laptop gets loaded and a big screen reveals just what you did. 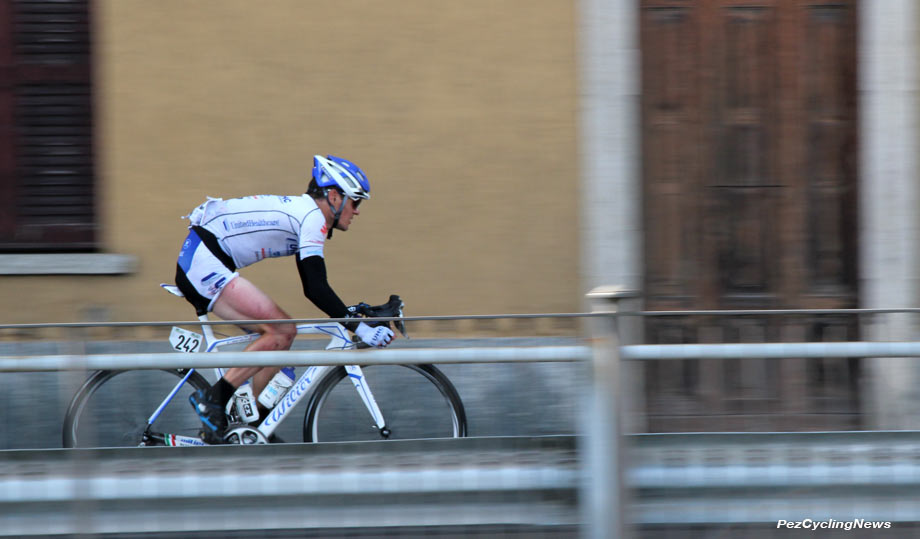 The bunch had already been soaked and the slippery roads made themselves known.  Kudos to this UnitedHealth Care rider, chasing alone after obviously going down. 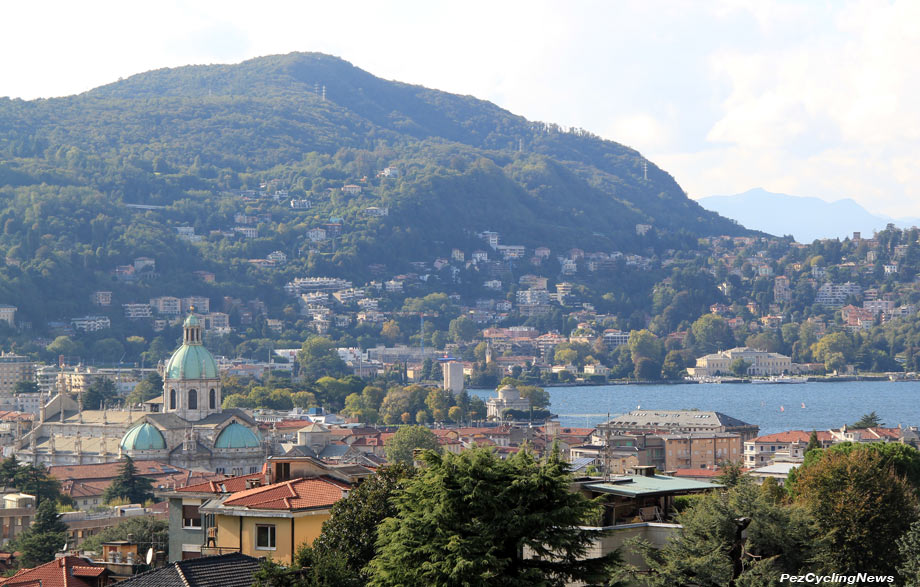 Next Stop – Como and the Civiglio.  With so much interest in the steepness of the Sormano, I knew it would be well covered by others, so set a new plan to see and show you some other views. I rode the Civiglio from the other direction a few years back and recalled what a nasty descent it was into Como – tight, steep, and twisty, with no room for error.  This year that descent became a nasty 4km climb and what I guessed would be a launch pad for the race winning moves. 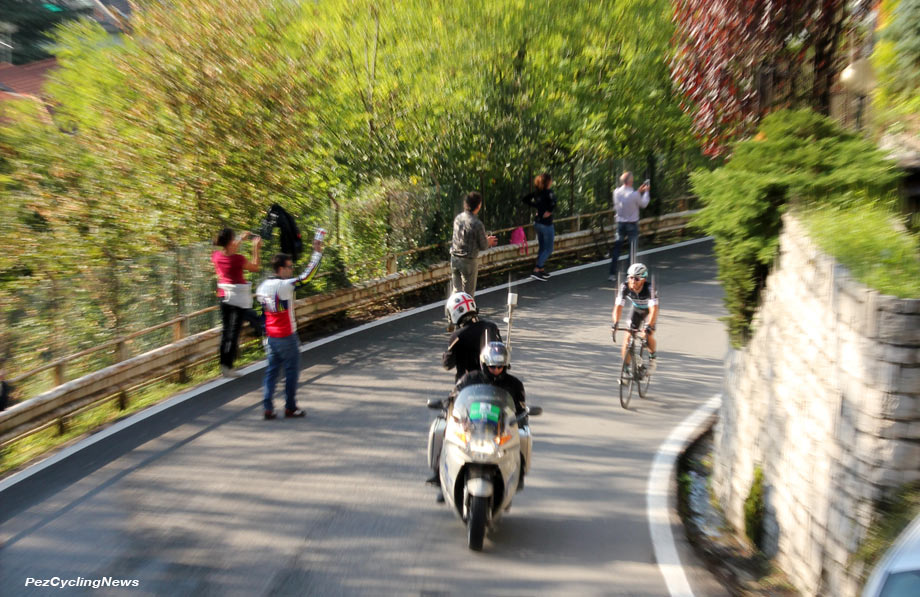 About 1km up the climb, Michal Kwiatkowski emerged as the lone leader… 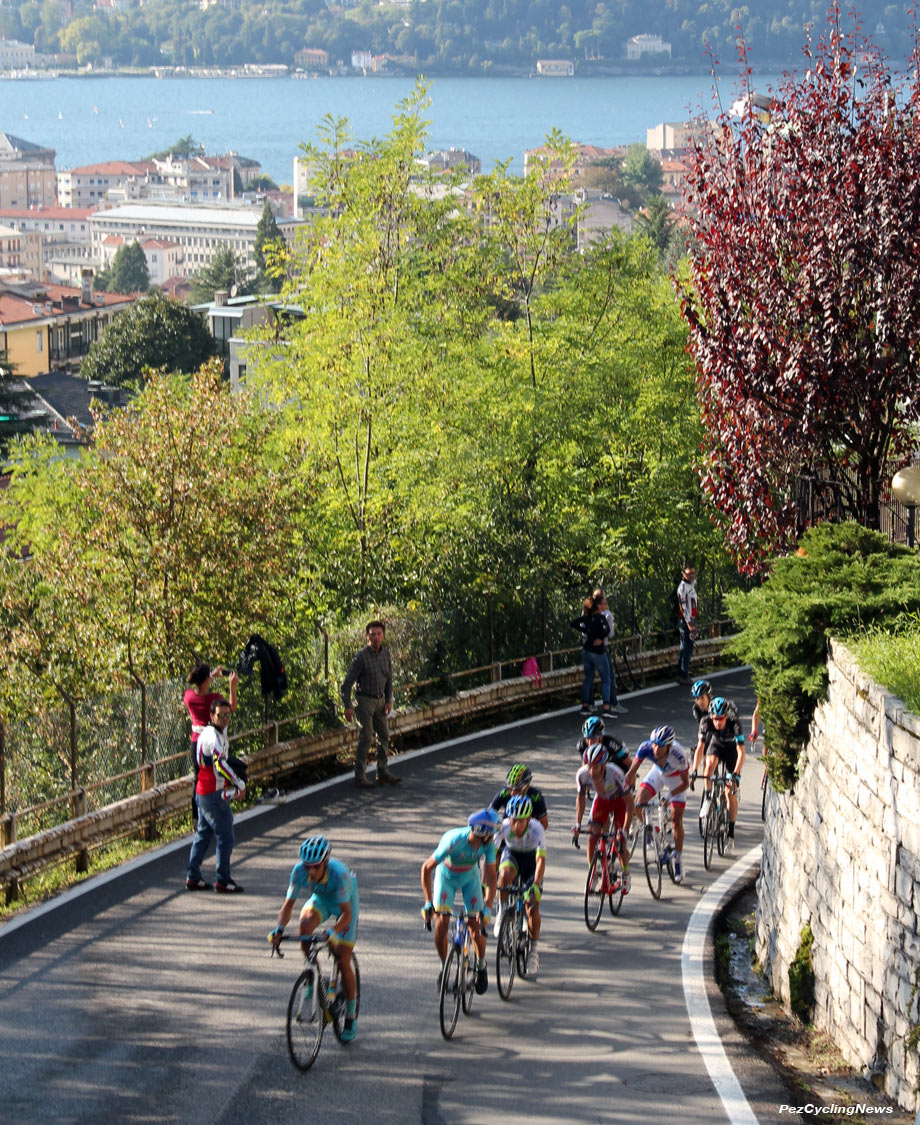 Followed a few seconds later by Nibali who’d finally joined the front of the race, already plotting his move and sizing up Chavez, Valverde, Moreno, Pinot and others. 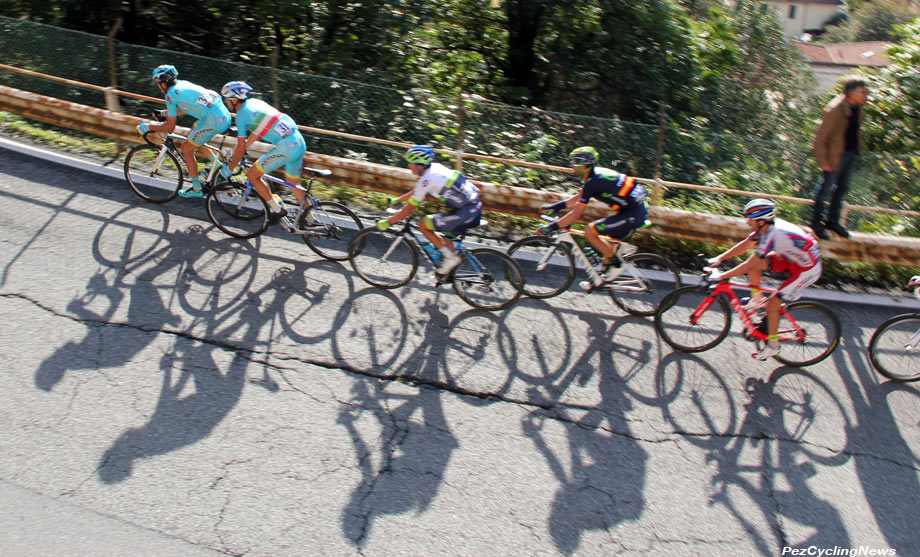 By now the race had exploded, with only 40-50 riders I guessed actually left on the course. There was a big gap back to the gruppetto, and I applauded the professionalism of these guys who could easily have climbed off on the first pass through Como, and saved themselves a bunch of agony on these final two climbs (the San Fermo was next). 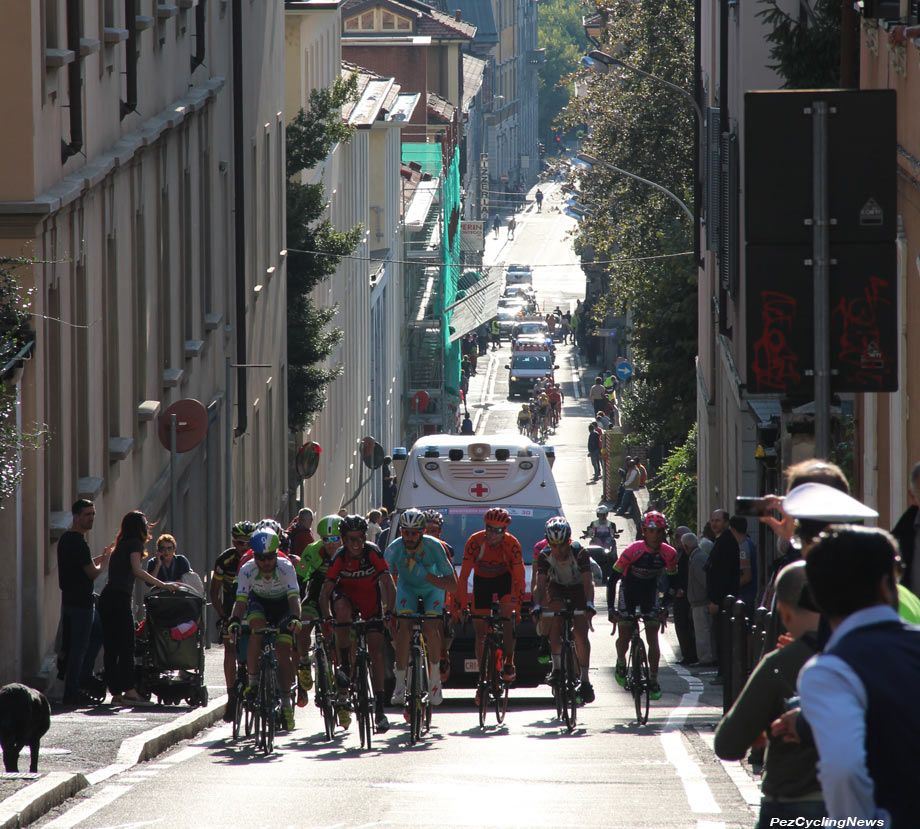 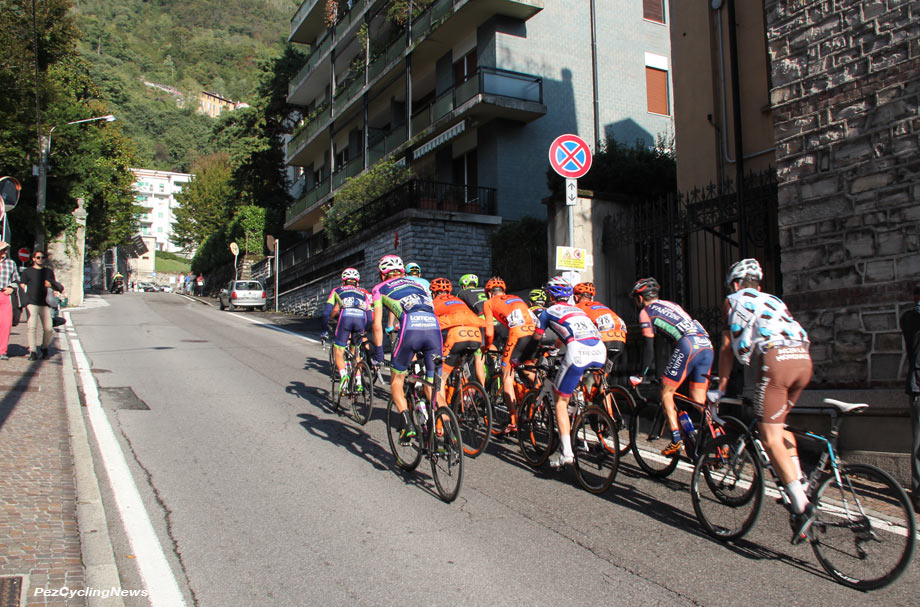 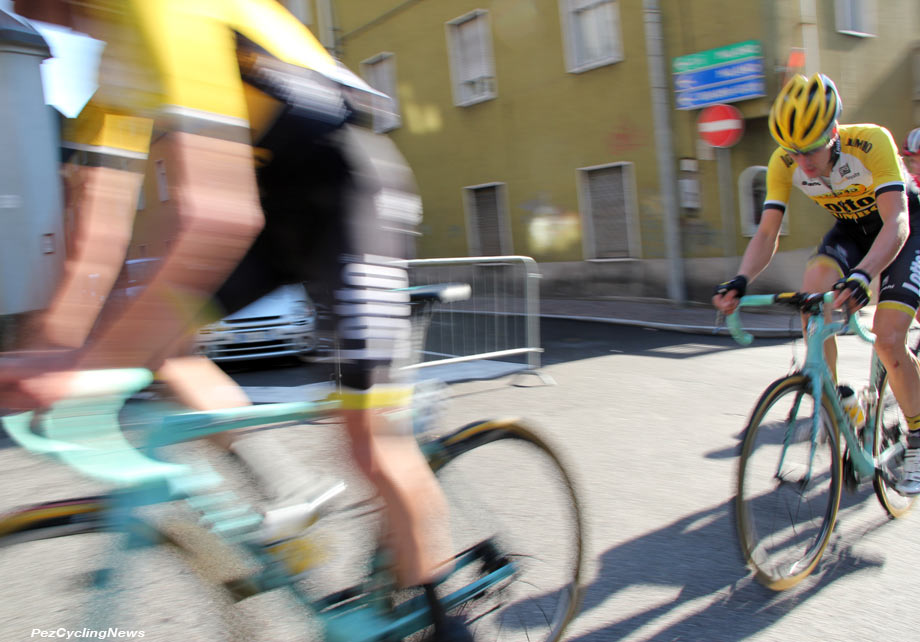 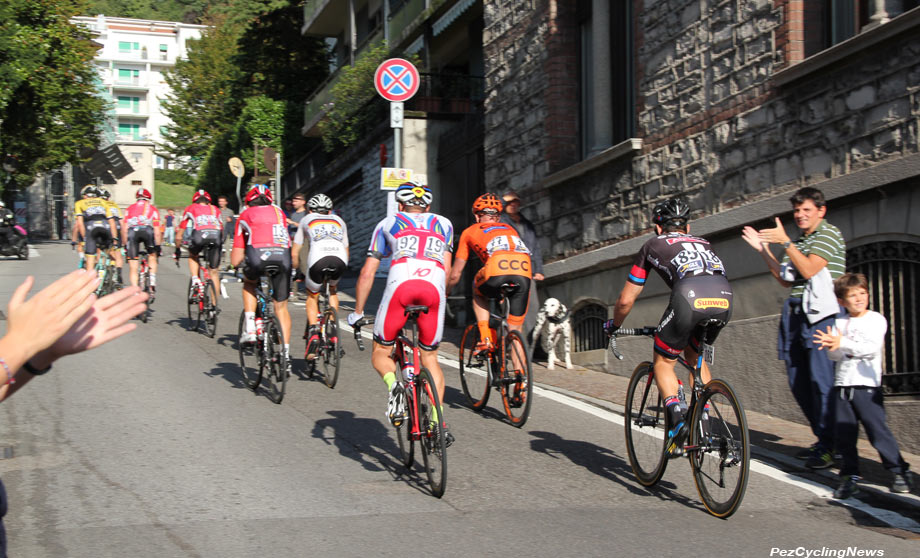 Overall it was an awesome day – the sun warmed everything by the end, and even though the truly horrendous traffic on Como took me an hour just to find the autostrada, it was all worth it.