PEZ-Fans:  One of my favorite days of the year is that early Spring Sunday in April when Paris-Roubaix bashes across northern France.  Most years I’m watching it at 5:00am with a hot cuppa Joe from PEZ HQ, but I’ve been lucky enough to see the race and ride the cobbles myself a couple of times.  My first attempt was in 2004 – so I’ve reformatted the pics to fit our new site, and submit for your consideration my own first account of riding the pavé of Paris-Roubaix. – Pez 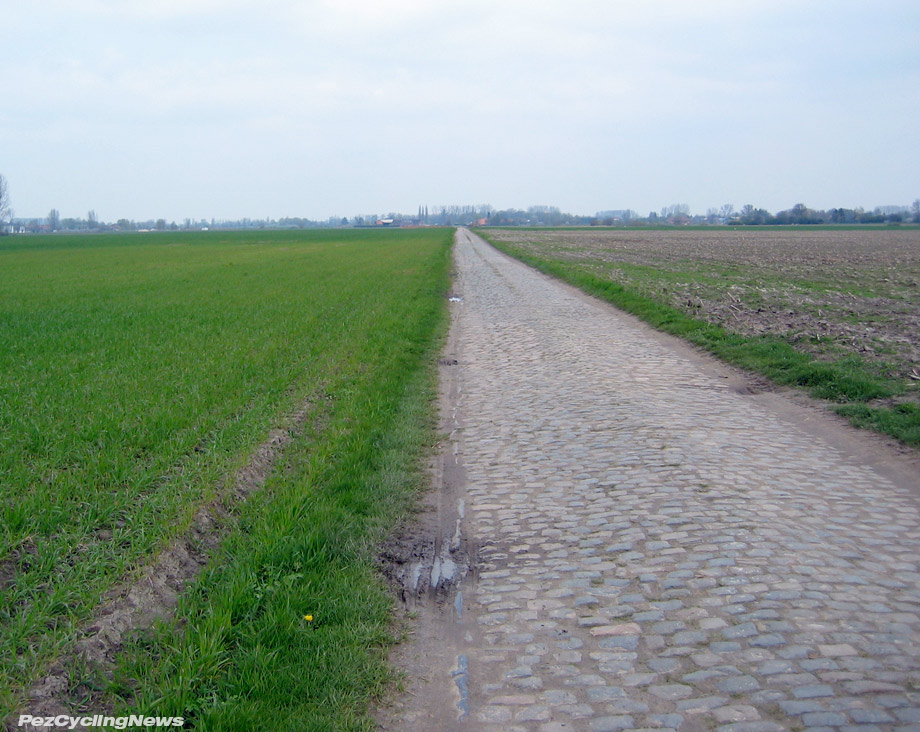 It was a day of historic – and epic – proportions.  We’ve journeyed far, across continents, oceans, and the toughest roads in Europe, to arrive at the route for Sunday’s Hell of the North – Paris-Roubaix. Me and my butt found out first hand what it’s like to ride the “pavé”. 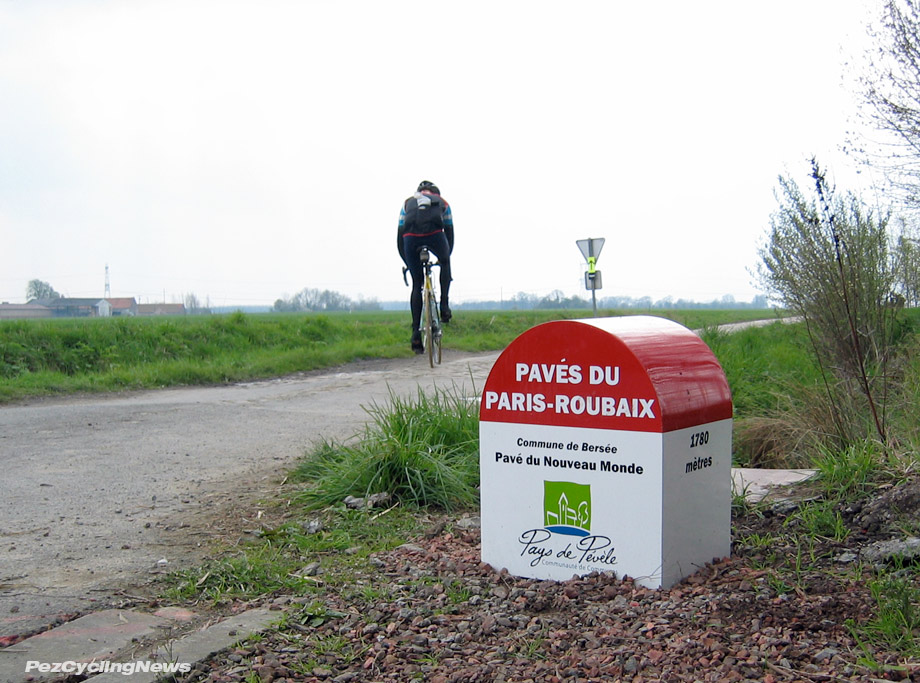 Historic sections of pave are marked by these posts, and protected as national monuments. The Arenberg Forest, for example, is only open to traffic one day of the year.

Friday was Day 9 of the Belgian Pez Spring Classics adventure, and after some of the nastiest, coldest, wettest weather I’ve seen, the day dawned bright and sunny. We were off to ride the second part of the Roubaix course, and were accustomed to heavy drenching rain during some part of any given ride – all I can say is thank God it did not rain today – as I now have even less interest in experiencing the pave in wet conditions… 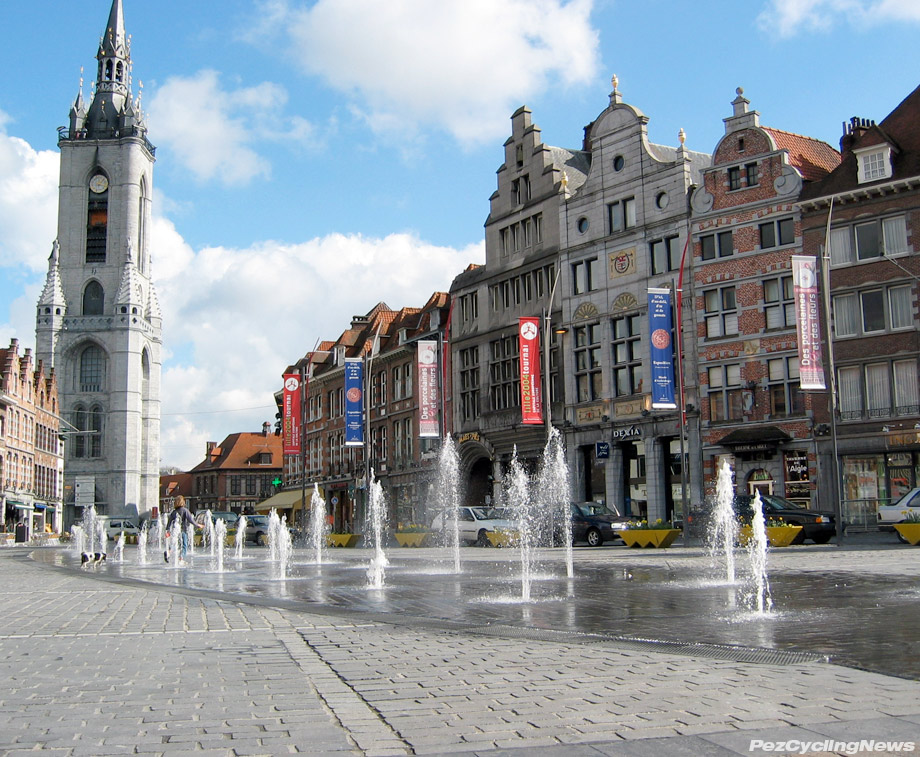 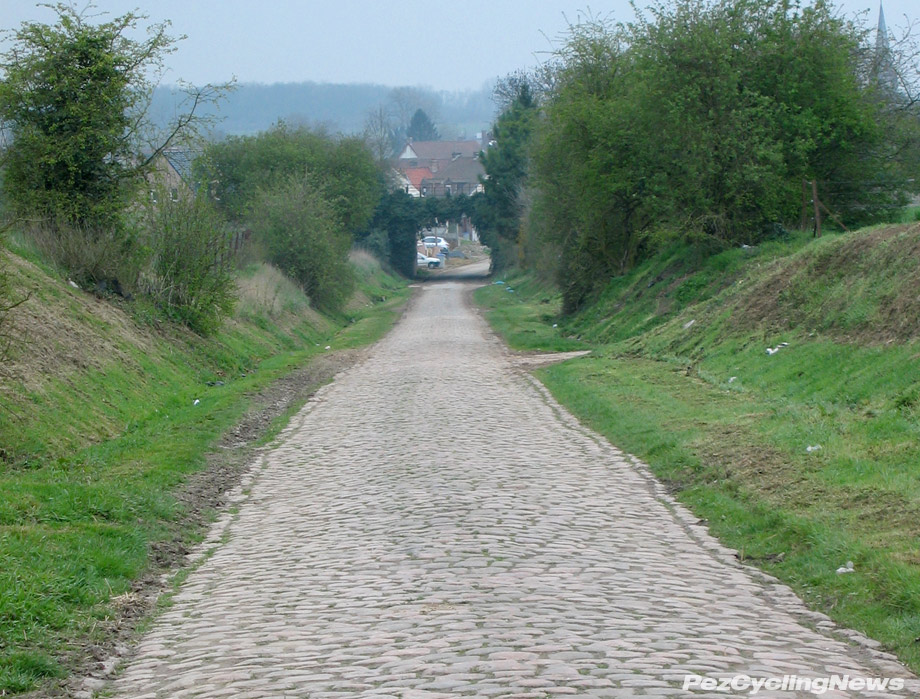 PAVE´: Sector 17
As we drove to our ride start point, low cloud rolled in, adding an eeriness to our anticipation of what lay ahead. The temp was again cold – around 44F degrees (6C), but it was dry.  After a short warm up on smooth paved roads, we turned hard right in the town of Haspres, dodged under a small rail bridge, and met Sector 17 – 1700 m cut through a field, slight climb to the mid-point, and then straight cross the potato fields that cover the countryside. 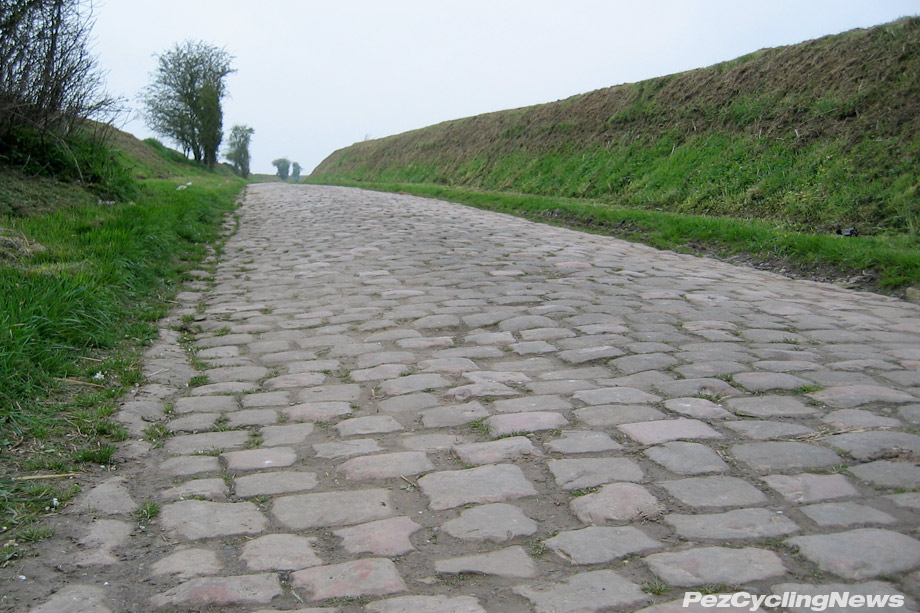 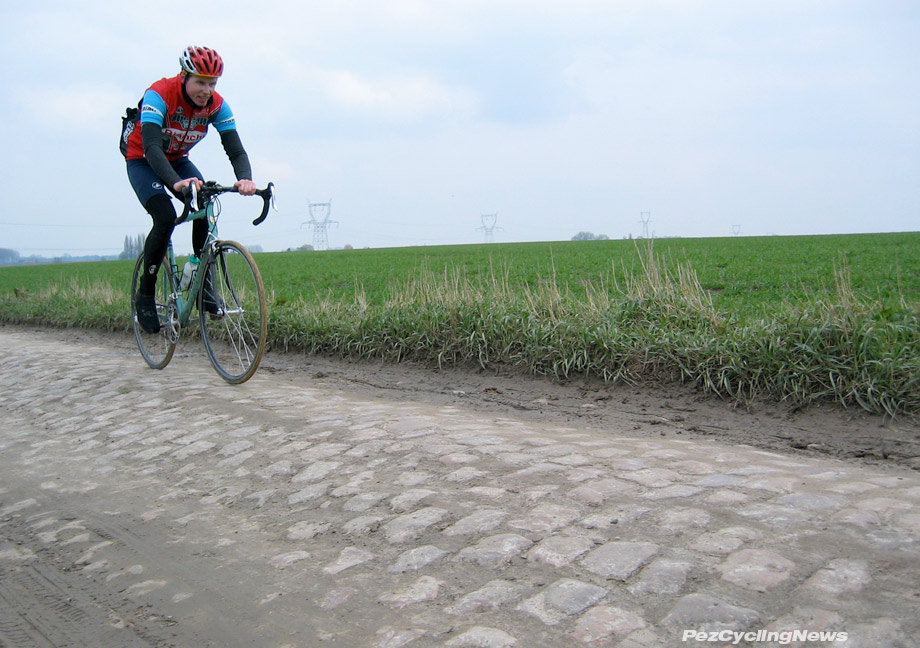 PAVE´ – How Do You Ride This Stuff?
There’s no easing into the pave, no dipping your toe to test the water… fuggettaboutit. And the slower you go the worse it is. You must attack the cobbles!!!  Experts say to ride the biggest gear possible, and use your speed to carry you across the tops of the stones – the pain is worse when you roll into the cracks and grooves between each stone and take the full jolt of unyielding French stone smacking its way through your bike to you. 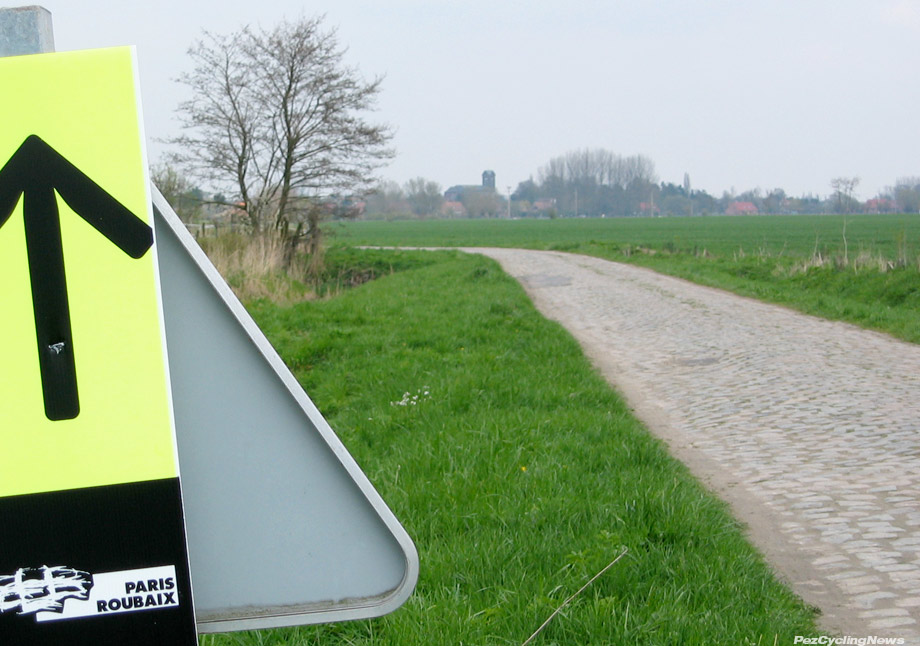 Which raises another problem… holding on. It’s two hands or nothing. You gotta hold on for dear life, because your once softly padded gel-tape is immediately transformed into what feels like sharply knobbled lead pipe that someone keeps smashing against your hands. Sure it’s like a jackhammer, but it’s worse… way worse. It took me about 1500 meters to wish I was riding dual suspension. And there is no escaping the harsh pounding you take. A rigid bike is a rigid bike – and your poor ass is what absorbs all the shock.

Next Up – ARENBERG FOREST 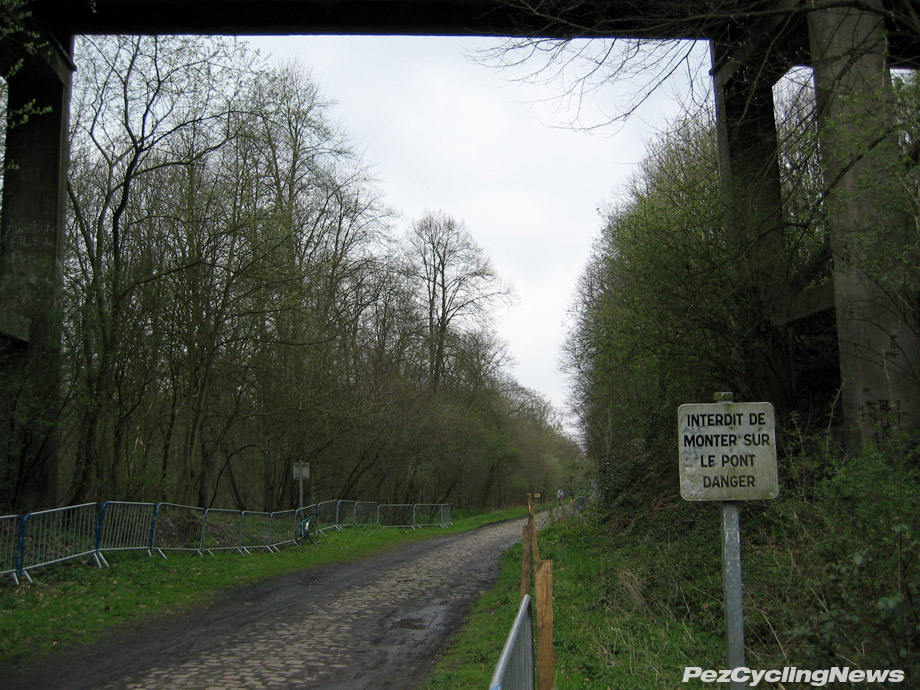 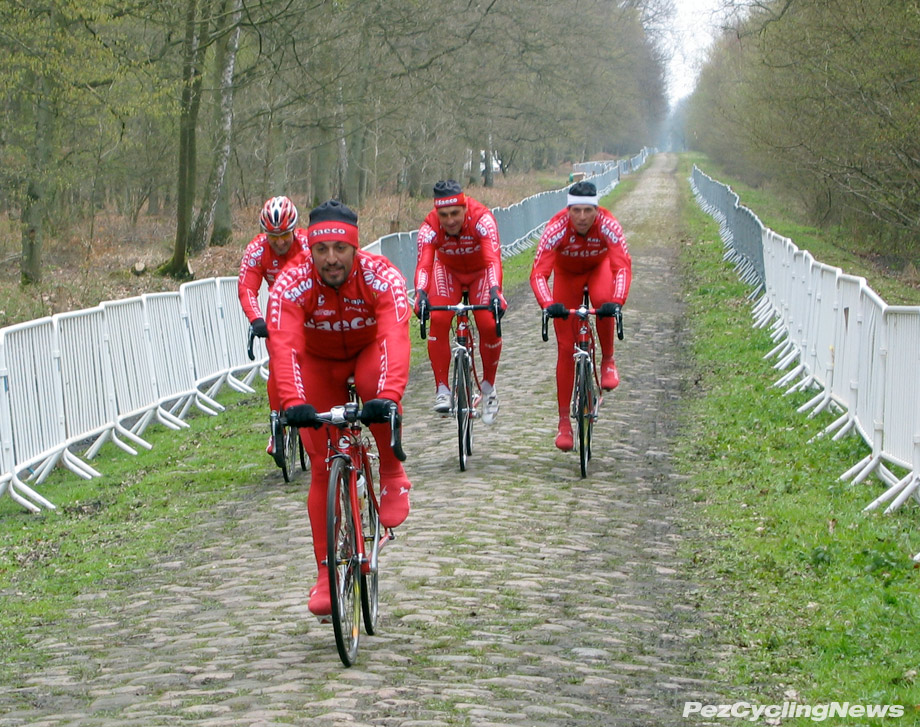 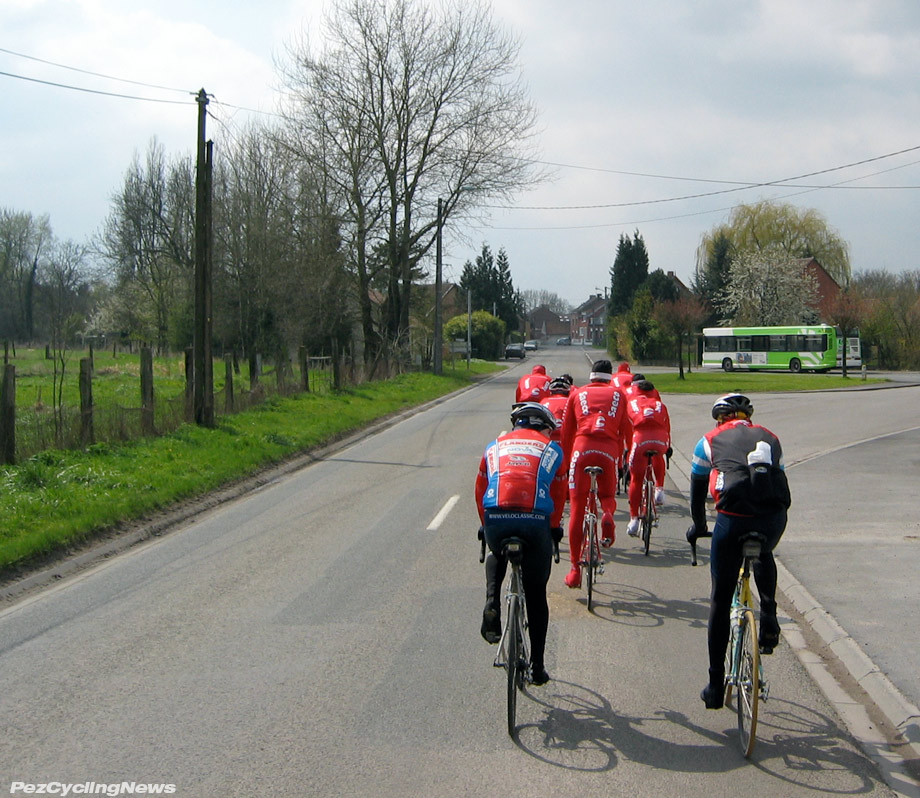 We stayed politely at the back of their group, rolling along a warm-up pace. We laughed knowing they could drop us at will, and thrilled that they hadn’t… yet. Then we hit the 1 km long Sector 14 at Wallers. It wasn’t like they so much turned up the pace, as simply held the pace we were riding on the road. Problem for us punters though, was having to notch-up our own game to hold that pace on the pave. 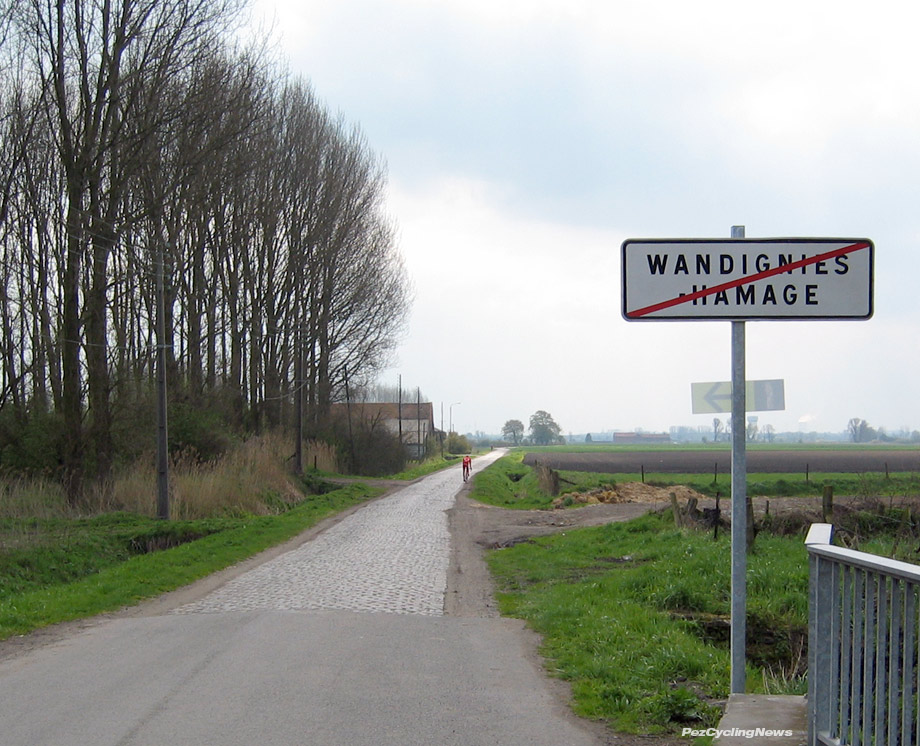 Of course we fell back, but caught back on before Sector 13 – an endless, punishing and demoralizing 3700 meters. I decided to give it a go and shoved my Dura-Ace 10 speed into the 53… I hoped for the best. Our little group of chasers dropped off one by one, accepting that survival here is a noble accomplishment. I finally hit my own wall, and watched as the Red Train rolled away across the French field. 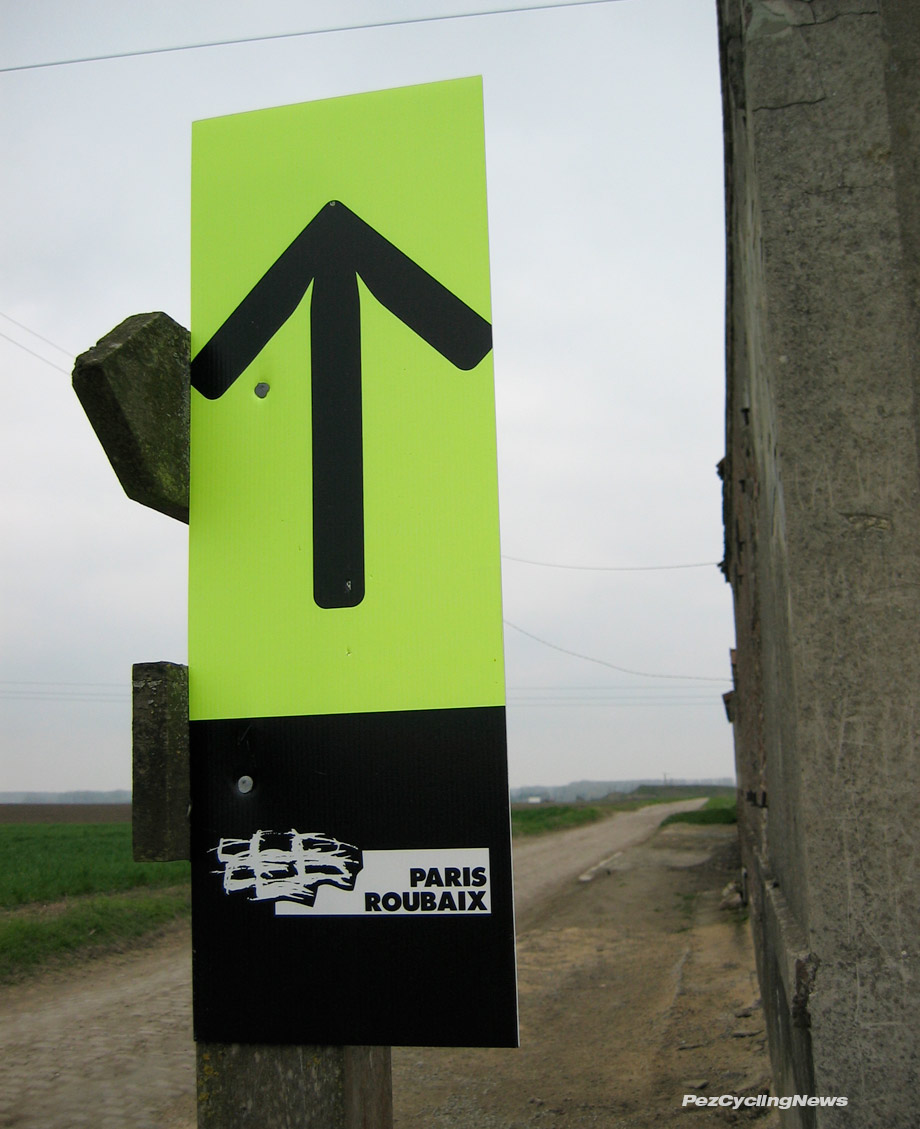 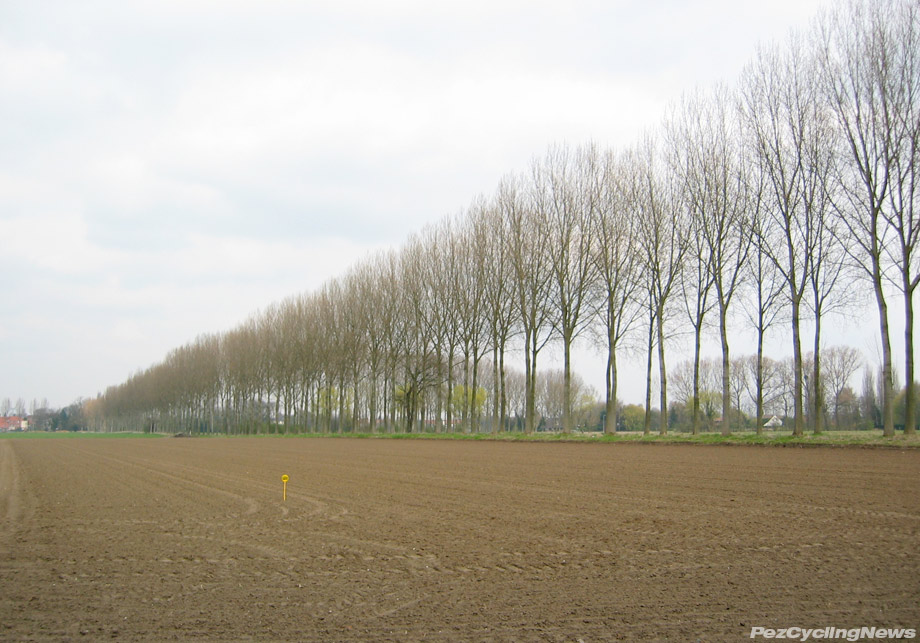 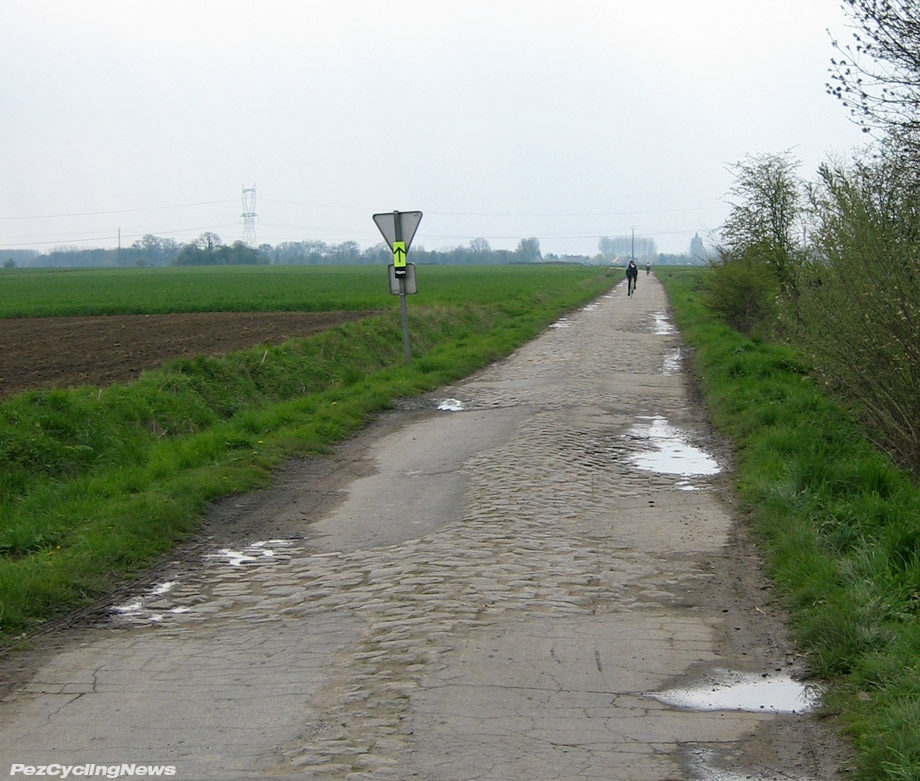 Paris-Roubaix is a race built for only the toughest of the tough. Having ridden these roads, I at least know what they feel like rolling and smashing under my own wheels. This is riding in the birthplace of our sport, and something you should all do – trust me – it will be well worth the pain. 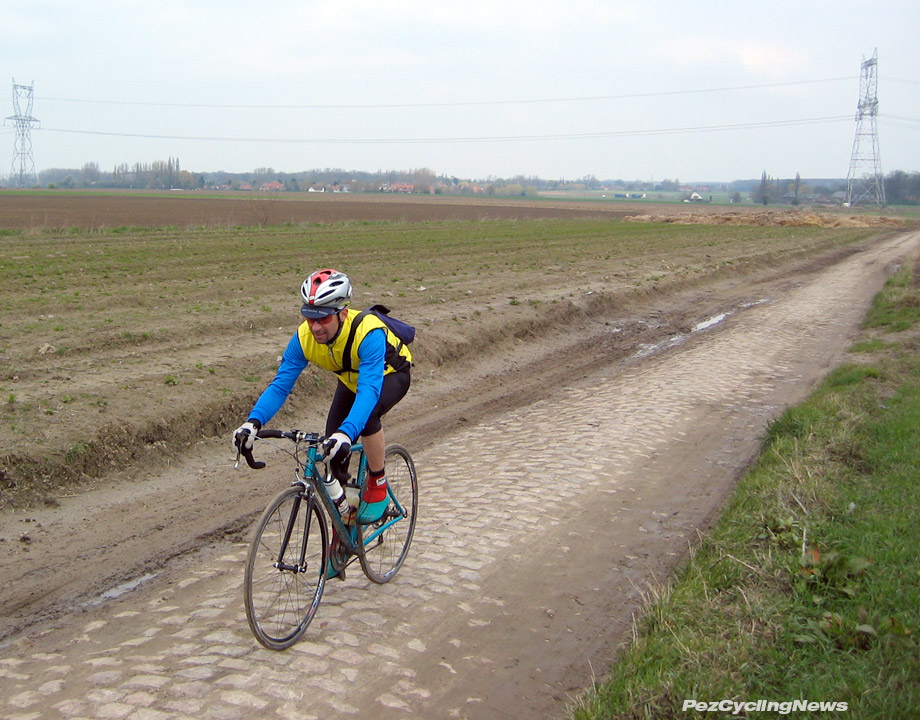 You hope your trusty steed doesn’t self destruct like the clown car at the smash-up derby. The only sound louder than your own cursing, is the cursing your bike gives you. Pings, pangs, groans, creaks, squeals squeaks and shrieks… seriously it’s enough to make you want to put your ride out of it’s misery, and then do yourself the same favour. After all that, the Co-Motion Ristretto emerged rock solid. The Rolf wheels held fast, and even though I half expected to lose a spoke or two, they are as tight and true as when we started.

This was a tough week in extreme conditions of wind, rain, mud, cobbles, and the Ristretto weathered them all. Honestly, I fully expected something to fall off, break, come loose… even chip. But it hasn’t happened. Dwan Shepard and the guys build a tough bike, and although aluminum is not my first choice to hammer over the pave, there’s a lot to be said for riding a bike that you can trust to get you home from wherever you go.

In the next couple of weeks we’ll put the Ristretto through the rest of its paces (can’t wait to go uphill on this baby) and get back to you with the full review.