If you want to discover the depths of your own patience, I can suggest no better test than a week in Rome with two young children. I’ve embarked on such a mission (albeit not intentionally) this past week, taking in the sights, shops, and dining that makes this one of the world’s great cities.

Navigating Rome is a challenge at the best of times, but lugging our two young girls with us could be worthy of a ‘Survivor’ episode. But as the say goes: “when In Rome…”

And that means taking the kids with you. Everywhere. 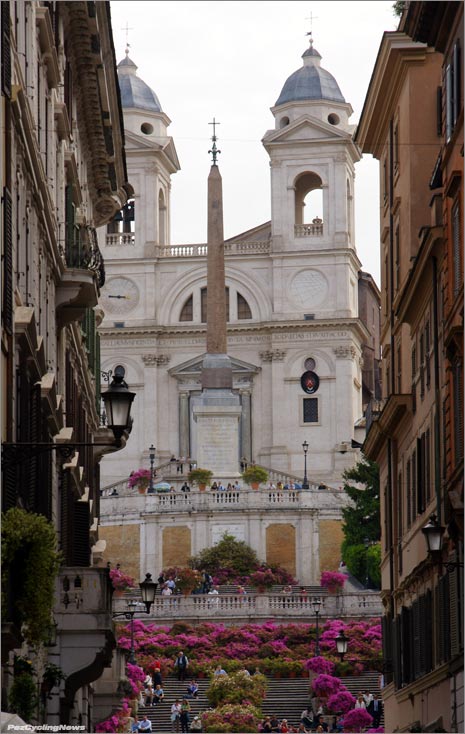 What’s a visit to Rome without seeing the Spanish Steps?

It’s not like we know anyone here, so dropping the youngs off is not an option for us anyway, and it has produced a lot of those funny family moments that will be with us forever.

It’s just that shuffling around the Eternal City is a lot more work than my system expected. 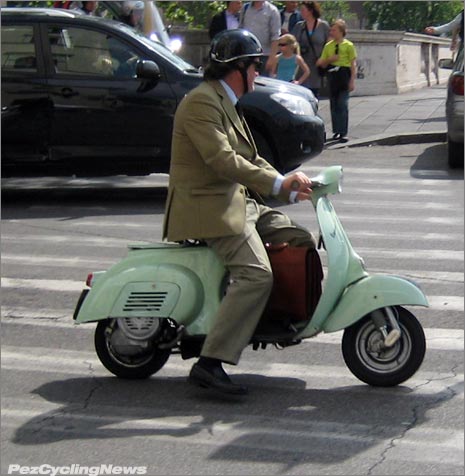 Here’s a classic Roman scene – sharply dressed man (or woman), zooming by on a Vespa, with brief case, dog, child, or groceries resting between knees. I loved that this guy was also enjoying a smoke on his way to work.

Our six weeks in Italy began with my dispatch of last week, finding our feet and adjusting the internal time clocks in the seaside city of Fano. I hope it’s not my last visit, as the pace and smaller size make for an excellent base camp – and the riding varies from miles of flats, to rolling hills, to huge climbs all within pedaling distance. 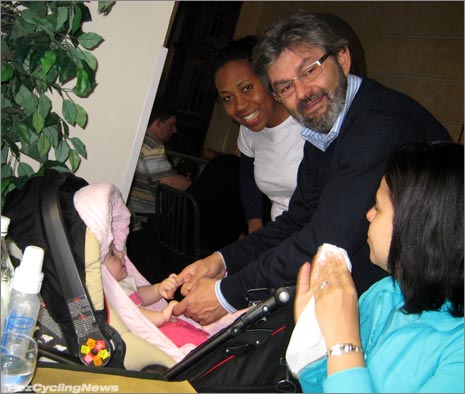 Italians absolutely LOVE babies. Our little Loredana never fails to draw a crowd where ever we go, and she loves the attention – gurgling and giggling away. Now if I could just parlay this into some sort of VIP / backstage access, we might have something.

Our schedule has been somewhat hectic – trying to see and do as much as we can while here, and that’s meant my riding days have taken a hit. No worries though, the time with my girls has been the best, and I’ll be back on the bike next week. 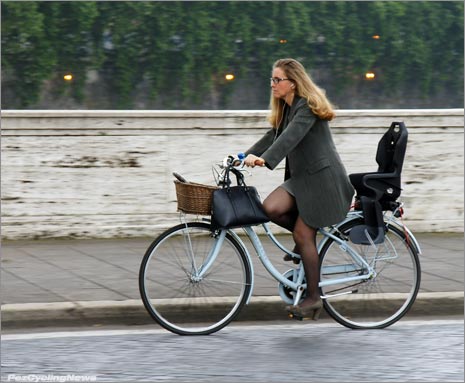 There’s actually a lot of cycling in Rome. Just not the kind you and me think of.

But the realities of parenthood keep my focus on what’s really important, even if my two darling children seem intent to challenge my patience and sanity at every turn. 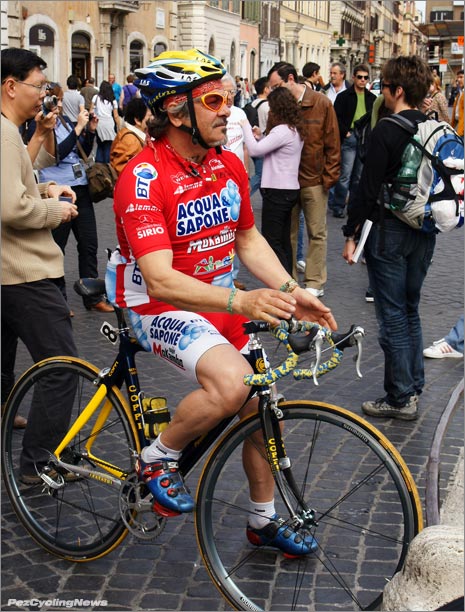 My fears that no one rode in Rome were put to rest on our first day. I wouldn’t have guessed that the Spanish Steps and its constant crush of humanity would be the best place to stop on a side, but it was also reassuring to know that someone besides me still loves their Briko Stingers.

But last Saturday was time to jam the rental Renault to the rafters and set sail for the Eternal city, which may not be the most kid friendly place in the world, but was still a stop Mrs. Pez and I wanted to make.

The shift from Fano to here took only a few hours, but we’re worlds away from where we started. Anyone who’s been here knows this city has a buzz unlike any other. The crush of people can be overwhelming at times, and the crush of cars is just plain nuts – or “casino” as they say in Italian (say ca-zee-no). Lanes painted on road ways are merely ‘suggestions’. Any space adjacent to a street is fair game for parking – as long as you can make your car fit. 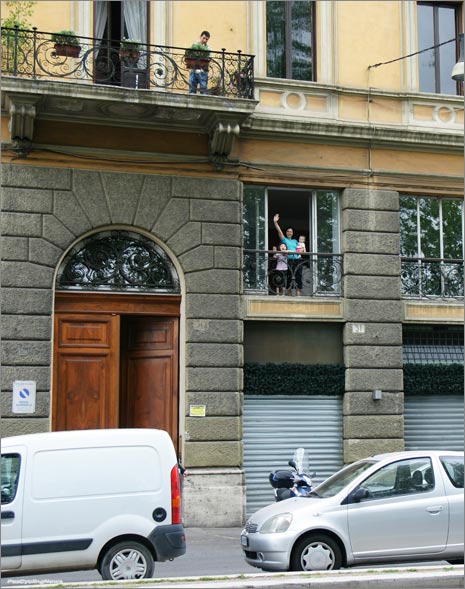 Our home in Rome – a spacious apartment overlooking the Tiber, and a constantly noisy street.

You Can’t Get There From Here
Most travel guides advise not driving in the center of Rome, which makes sense given the constant traffic jam (daily from 9AM till about 1100PM), total lack of parking, dizzying array of one way streets, and constant threat of being sideswiped/ rear-ended/ front-ended/ dented by one or more of the crazed local drivers. Even while parked at the curb you’re not safe – as one morning I discovered this terrifying gash that ran the full length of the Renault. 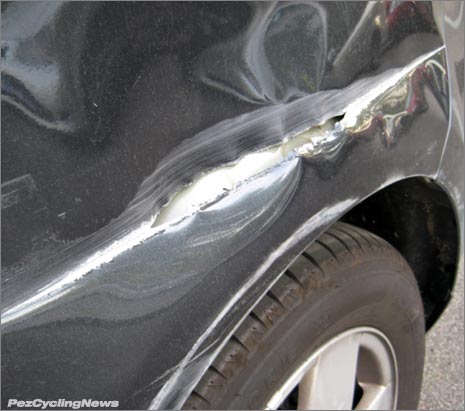 Walking is the best way to navigate the maze of streets and throngs of people, but lugging a 4-year old and a 7-month old along could be considered a low- mid-grade level of torture by many governments, (the kids don’t like it either…) A stroller is essential, but the cobbled streets and lack of curb-ramps mean your $400 kiddie-limo takes a beating, and could explode at any moment.

And did you ever notice how hard walking actually is? Gimme a bike and a 4 hour ride any day – just don’t make me walk more than a kilometer. And try getting my 4-year old to walk more than a few minutes… With baby taking up the stroller, guess what daddy does… 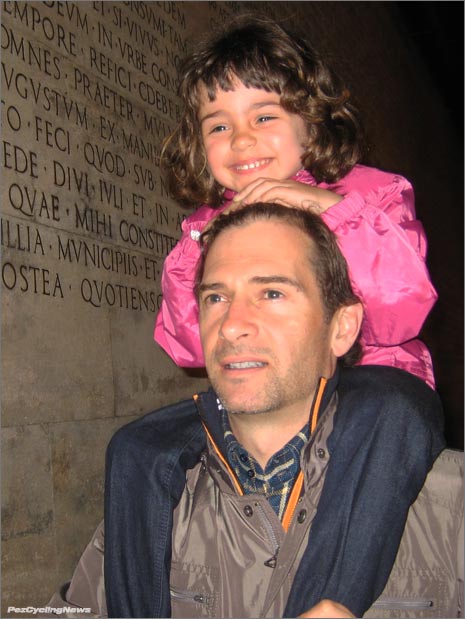 You got it – I’m beginning to feel like an urban camel – carrying my daughter home after each of our multi-hour sojourns. I wouldn’t mind her riding on my shoulders so much if she’d just stop using my hair as a hand-hold, inducing an unavoidable Kramer-esque quality to my coif. 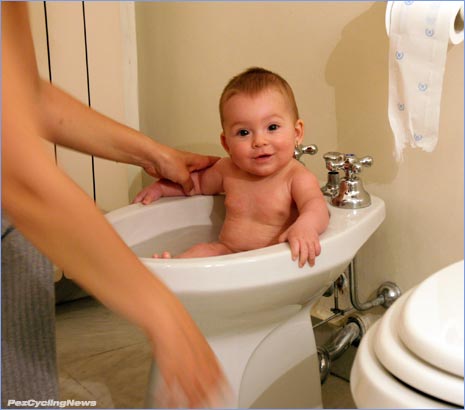 Italians love kids so much, they’ve installed these tiny bath tubs in every bathroom.

So after a couple days we discovered that driving in Rome can be kind of … relaxing. Faced with a hefty hike to see the Coloseum, and the rigors of lugging kids and stroller along on pubic transport, we decided to use the car and drive there. I know it sounds crazy – but inside the car the girls were happy – the wee one slept while the big one sat contentedly with her blankie. Mrs. Pez and I got to see a couple sights as we drove past the Vatican and Circo Massimo. Inside the car was nice and quiet – even surrounded by traffic. To top it all off, we scored awesome parking near the Coloseum, so walking as again reduced to a minimum. 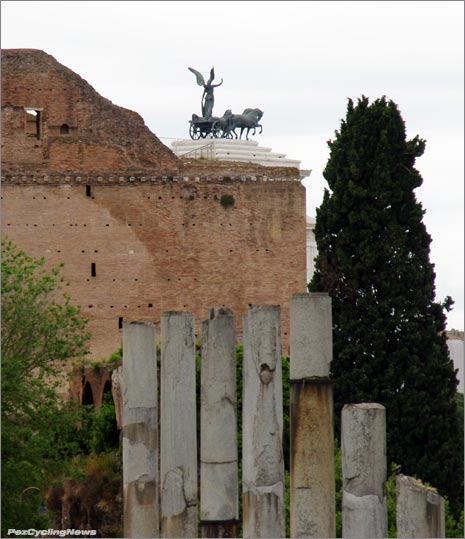 We managed a walk around at the famous Coloseum, always a worthy stop with its amazing history and impressive views of the city.

Bike Transport
Luckily it dawned on me weeks ago that transporting the bike might be a challenge – seeing as the car would be stuffed fatter than nonna’s cannelloni. The good folks at Saris were quick to step in with a perfect solution – their Solo rack. 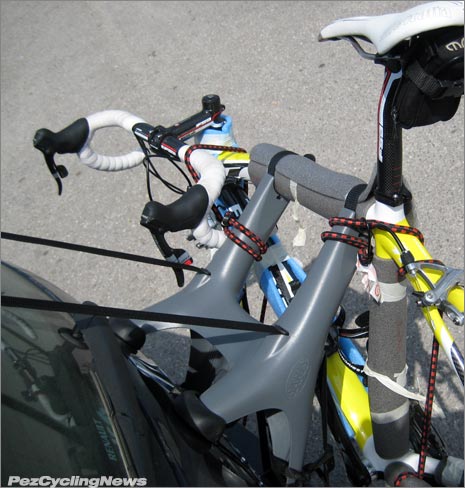 It’s a one-bike carrier, small enough to stow in the trunk of even the smallest car, but sturdy enough to keep your baby secured for easy transpo around town – and beyond. I’ll admit that taking the Solo onto the autostrada at 150kmh is likely not what the designers had in mind, but I figured it would be a good test. I used extra pads to protect the bike’s paint, although the Solo comes with a softish compound rubber where rack meets bike. I also removed both wheels, to lighten the load and reduce the stresses I’d be implementing on the cross-country ‘giornata’. Finally, I added a couple extra bungees to better hold the bike in place and reduce any side-to-side movement which lay ahead on the twisty roads that carried us west from the Adriatic and through Umbria.

Several hours and several hundred kms later, the bike arrived in Rome unscathed. I’ll file a full report on the Solo later, but it’s worth a mention – and for sure with a look for inexpensive and easy bike transpo. 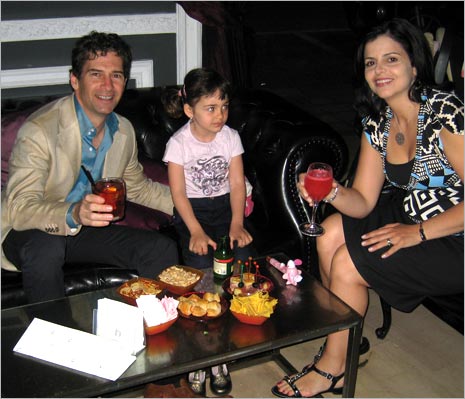 There’s no denying that taking a daily apertivo is one of my favorite things about this country, and what better place to play the part than via Veneto, made famous by the 1950’s film “La Dolce Vita”. You’re paying for location here – as these negronis were priced 3 times above the normal rate, but the tastey array of snacks helped defray the costs. And as un-kid friendly as Rome seems to be – it must be noted that children here are welcome pretty much everywhere.

So… when in Rome… 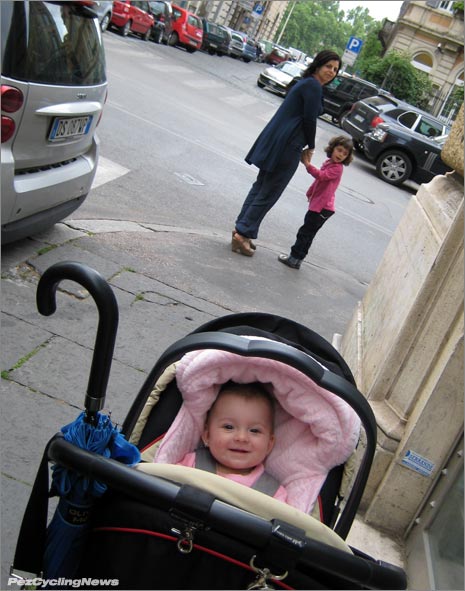 Our next stop is the Ligurian Coast, and the Giro – so stay tuned for more from Italy.