Italian Life: Starting Your Day with the Giro

Life with the Giro d’Italia: Peter Easton could guide you on a trip just about anywhere in the world. But Italy… well it’s in his blood. As the 2019 Giro d’Italia is about to kick-off in Bologna with a tough 8.2 kilometer time trial, Peter gives us his take on the Italian spirit. 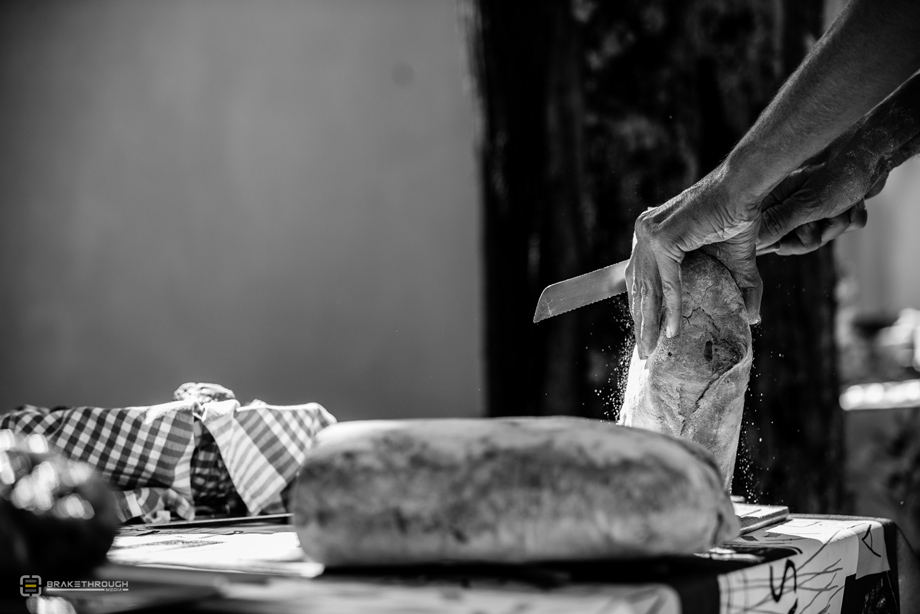 One of the best things about being at the Giro d’Italia is the intrinsic link between cycling and Italian culture. Growing up in an Italian household (my mother’s family is from Sorrento and Benevento), I learned the idiosyncrasies of Italian life from my grandfather and my mother, my aunts and uncles and cousins. The lessons taught are lifelong, and passed on to the next generation, and of course have come in handy during my travels and doing business throughout the chaotic peninsula. There is the slang; the proper way to eat certain foods, which are appropriate to certain days and times; there’s a fork and spoon for spaghetti; but no knife; wine with breakfast is acceptable; dinner without it is not. 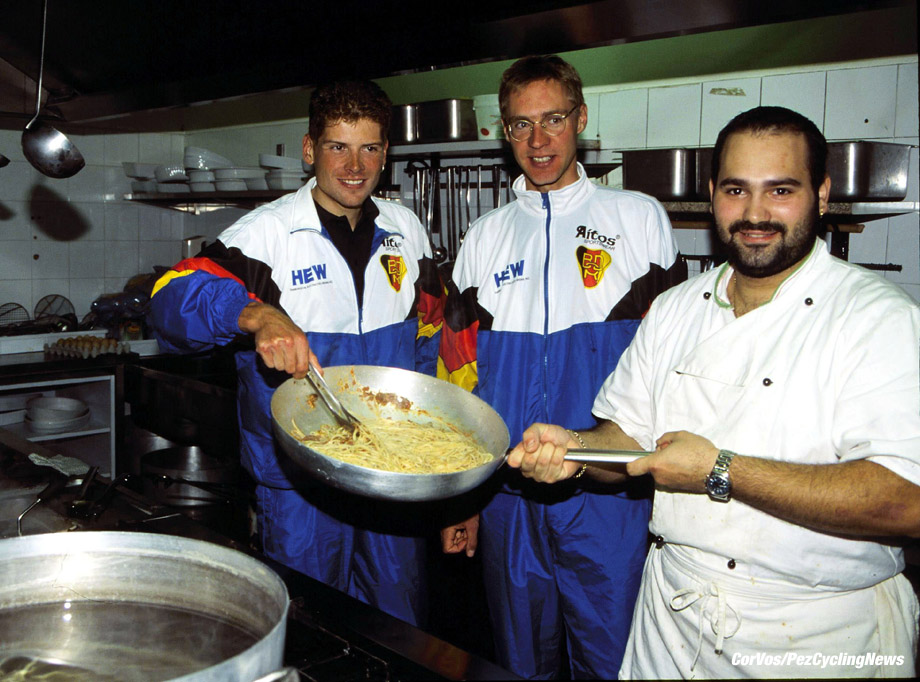 The list goes on, but my point is there are cultural rituals in Italy that represent both a passion and humility about the people. And regardless of where you are from in the country, the most important thing is to listen to your mother. As a kid I would go to little Italy (when it existed) in New York City and Jersey City, New Jersey (when it was still predominantly Italian) and somehow my mother and grandfather always ended up talking to someone, who in turn always ended up giving us something. The culture is built on socializing, and I didn’t care what they were talking about as long as it involved a cannolo for me. 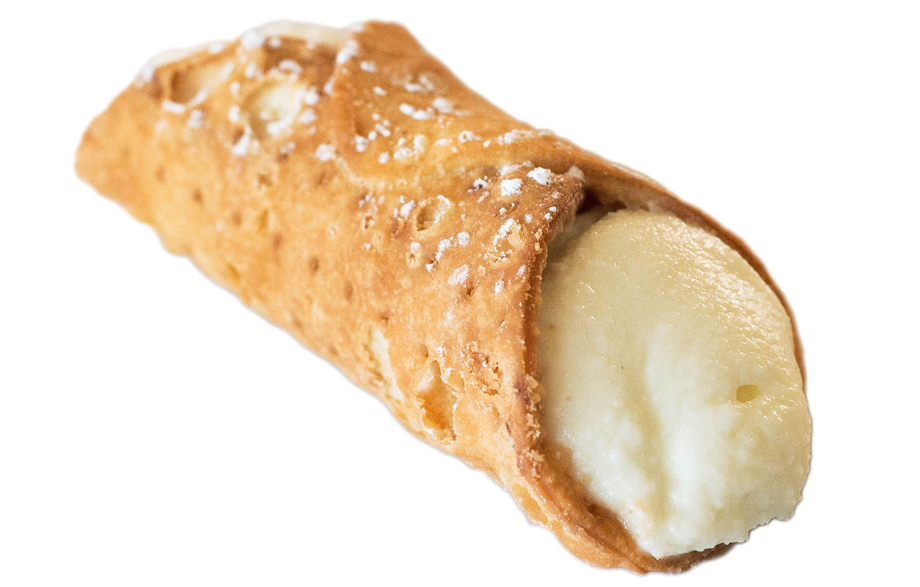 The unwritten bond Italians share with fellow Italian is one of the strongest one can experience and the understanding of the rules, or lack thereof, is the Italian way and generations continue it inherit the ability to interpret the rules as it suits them. This helps with cutting cues, drinking free coffee, snagging a free meal, and generally going about their day interpreting the rules to best suit their mood or the situation. Understand this and you can uncover the secrets of how to pass through a maddeningly charming world colored with so much genuine passion and love it can bring tears to your eyes; misinterpret it and it symbolizes a maddening and chaotic culture that appears to be out of touch and a sideshow. The Giro, in all its cultural, political and social pageantry and spectacularness, falls right in between. 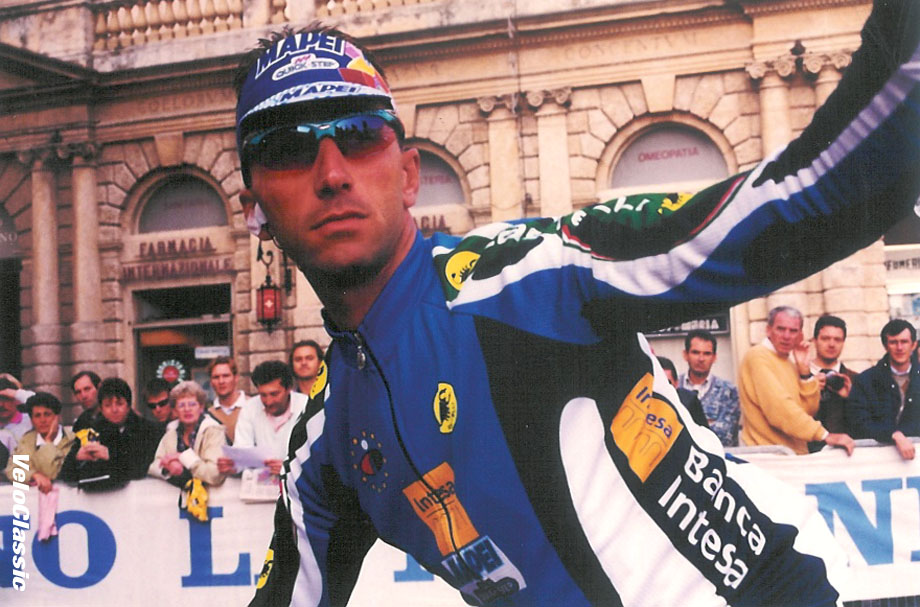 A few years ago, a group of us were at a stage start in the village of Urbania in the central province of Marche. We were invited guests of retired Italian pro Andrea Tafi and we took quickly to the VIP atmosphere we were ushered into. The strong aroma of coffee filled the air, so typical in Italy, as beautiful Italian hostesses making and serving so elegantly an endless supply of espressi and cappuccini before the riders arrived was heavenly. As we lingered inside the fenced off VIP area, where the riders would retreat to after signing in and before the stage departure in front of the podium, I noticed the team buses arriving on the other side of the fence along a long straight boulevard parallel to the main street thru the village. I back tracked along the main street, which was barricaded and decorated in all the pomp and flair with pink flags, national flags of azzuro, the Province, green and white and red country flags and handmade signs honoring their heroes. 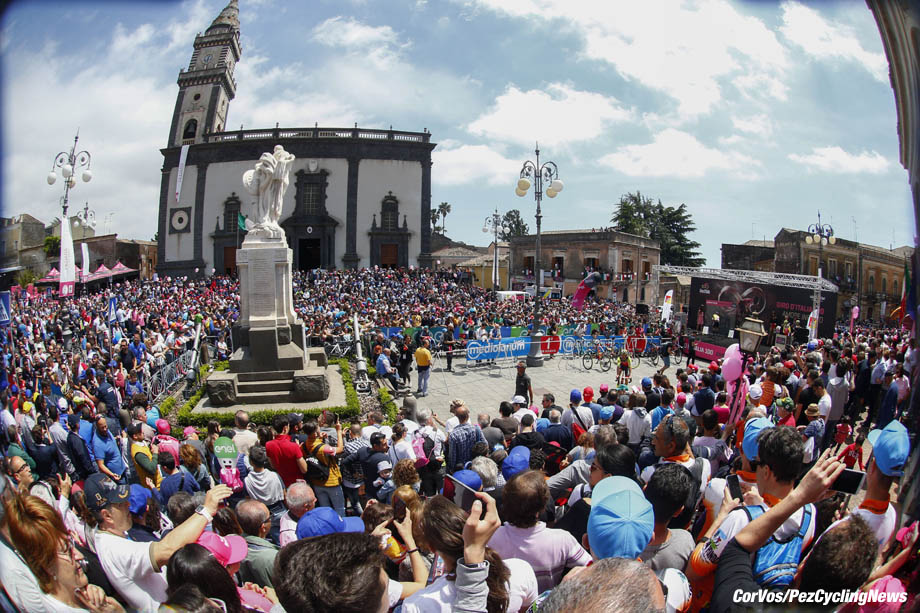 I navigated the throngs of locals that crammed the barricades, their day enveloped in Giro glory having finally arrived. People took time off work, the schools were closed and the cafes were packed. As I weaved my way through the buses, I eventually found myself on the other side of the fence from where I started. A bit perplexed, I saw one of our group. The thought of walking the gauntlet of Italian mania to get back to the village was daunting, so I prodded my friend Bill to split the fence and let me slip in. If we were in France at the Tour, this would be an unforgivable act and result in a shameful escort out of the VIP area. But it Italy, breaking the rules in general (seen as “interpreting”) or moreover as an act of logic-which can sound counter intuitive in Italy, is simply ignored. 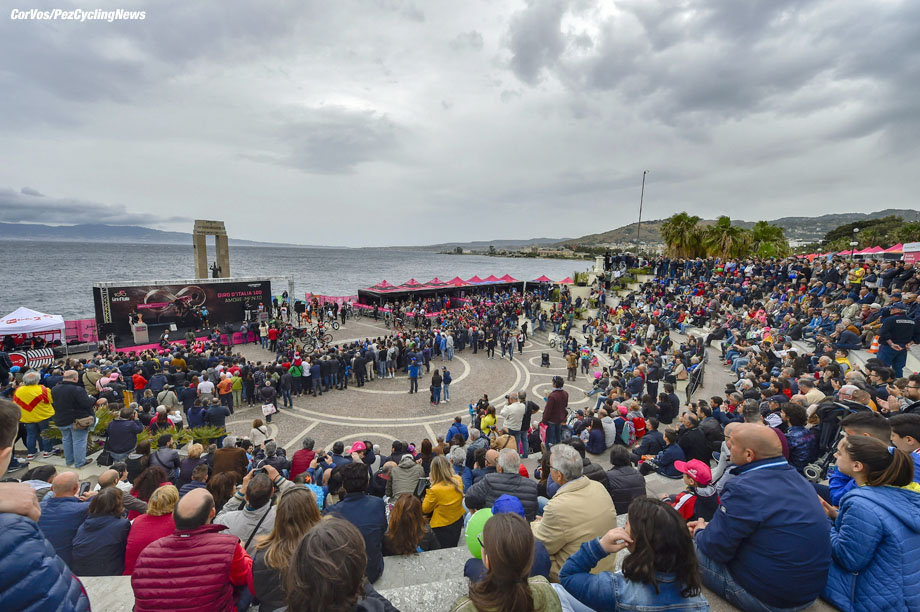 Back to my original spot and with a coffee in hand, a few riders had seen what I did and came up to ask where the sign on was. I directed them down past the buses, told them to make a left then another left, explained the main street and the podium and pointed to the other side of the VIP village as their destination, merely 100 meters away. Exasperated – from both my directions in Italian and the illogical procession it required – I felt compelled to simplify to their day a bit and invited them into the village the same way I came in – by opening the fence. No one will miss a few riders on the main street I thought. No sooner did I do this and more riders followed – not only Italian but the Spanish, a few German riders, some Belgians and even an American or too. The roar from the main street began to subside and riders were appearing on the podium without being paraded in front of the excited townsfolk. An Italian custom had robbed something from the very people who invented it, thanks to me. 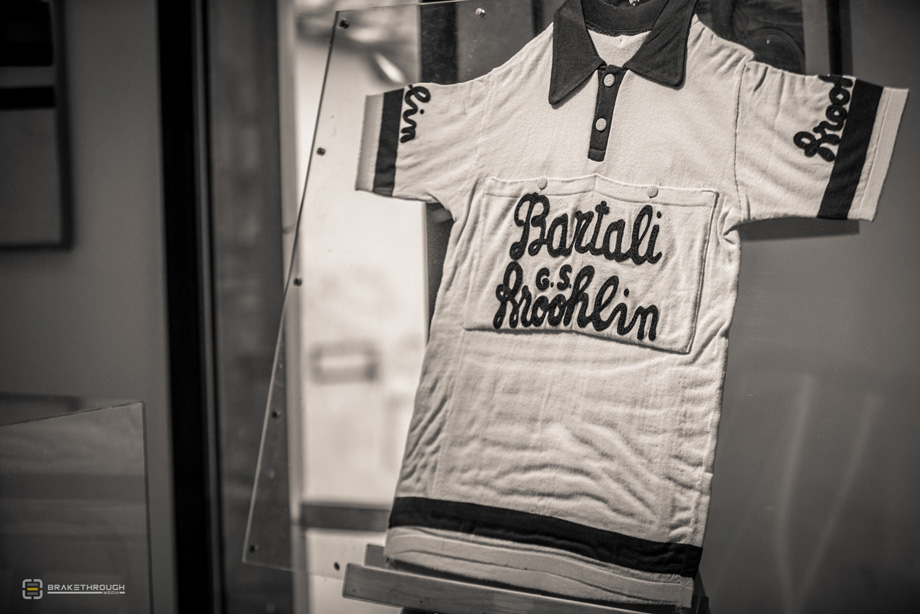 A week later, traveling on my own, I decided to visit the stage start in Mendrisio, Switzerland. I still had the VIP passes in my car, so I grabbed them and figured I would take in the start before heading to Varese to see the finish. As I walked to the VIP village, a stranger called out and asked me for directions to the start area. He was from Stockholm, working in Lugano and wanted to take in a day to see what the Giro was about. As we neared the village entry, I pulled out a pass, handed it to him and told him to follow me. We cruised through the gate and my new friend’s eyes lit up like he had just been ushered into a free arcade hall. Martin was astounded by the free handouts, and collected – in addition to coffee – skoda hats, foam fingers, stress release balls, key chains, energy drink samples and a bunch of brochures on kitchen equipment, cars and air conditioners. I told him he needed a commemorative Giro d’Italia gift packet, complete with t-shirt, back sack, a mascot stuffed animal and some other items. In looking through the packet, he was intrigued and as he held up the pink t-shirt he asked the young sales woman in all seriousness if it came in any other colors. Scandalous. I tried to explain how pink is the color of the race and the maglia rosa and how it symbolizes the race and Italy and the Gazzetta dello Sport and I ran out of words under the annoyed eye of our Italian hostess. 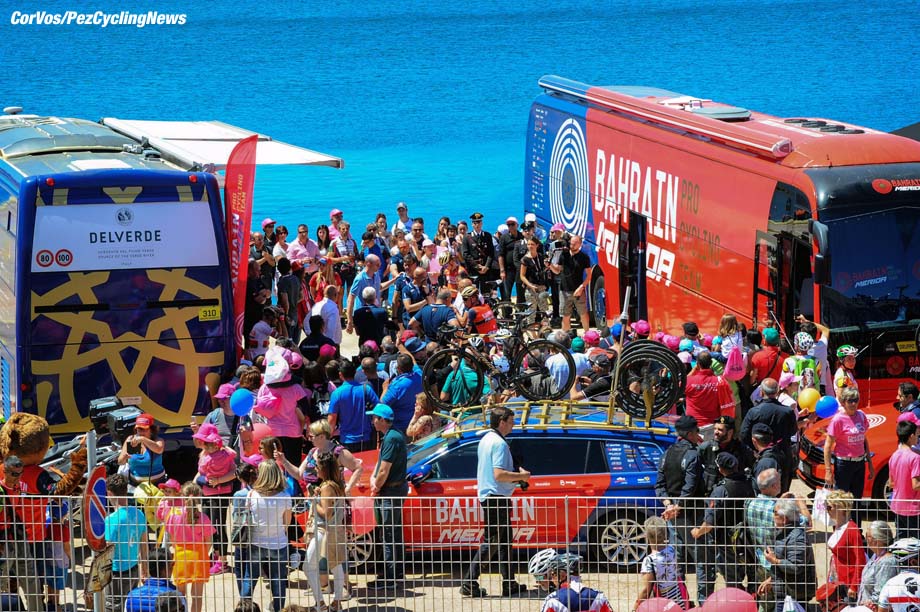 I quickly propped Martin up at the nearest coffee bar. After picking up a few posters on the way, he excitedly told me how much fun he was having. Never once did he ask about the riders, the day’s stage or anything even cycling related. Then I spotted Mario Cipollini. I interrupted Martin and pointed. Who is he, Martin asked? He personifies Italian flair I said; he oozed class and commanded respect; he had won more stages in the Giro than any other man in history and returned glory to Italian cycling when he sprinted to victory to claim the World title in 2002. I don’t know why, but I told Martin he must meet him. I saluted Cipo and he responded happily to my request for a photo with my friend. Side by side, the difference in the two was glorious – one with rugged, unshaven handsomeness, a lion’s mane tapping his shoulders, coated in leather jacket and shoes, athletically fitting perfectly custom tailored shirt open to mid chest. The other, a pale skinned Swede with glasses, bags at his side like he just stepped out of the local COOP, a twisted lanyard around his neck, a poorly fitting Skoda hat on his head. “Uno, due…” as I prepared to click, Cipo with his head up shoulders squared, gleaming into the camera, Martin suddenly turned and looked up and said, in all seriousness “who are you again?” The scowl I captured on Cipo’s face expressed all the indignity my naive friend had just showered on the fastest man in Italian cycling history. 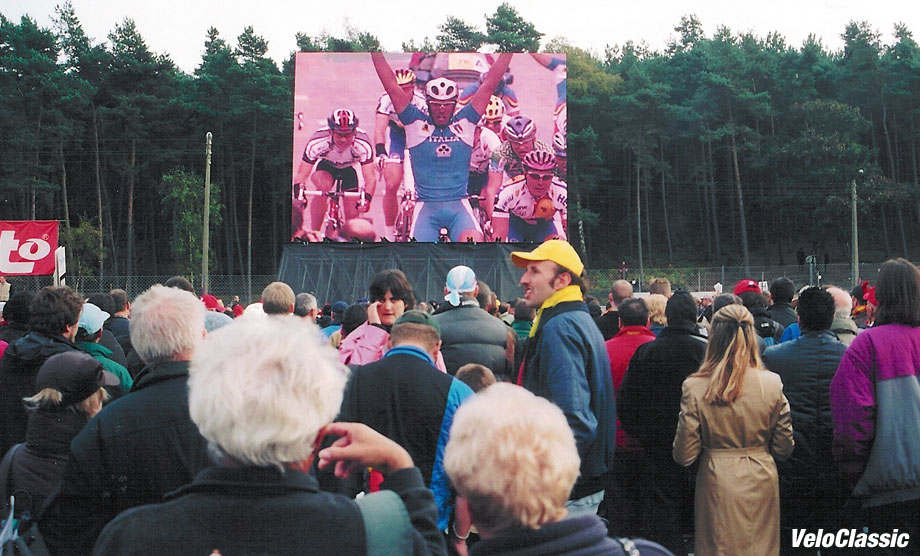 I quickly ushered martin away, muttering an embarrassed apology to Sr Cipollini. I sent Martin on his way, arms full of schwag bags, his eyes bulging with a child’s innocence. I wondered if this outsider had tasted Italian culture; if he had embraced it whole heartedly; had taken in the sounds and sites of Italy’s great sporting event. At first I thought not; how could I not have shown him the bikes, the riders, the sign on podium? And how could I have possibly let him embarrass us in front of the lion king? I had a moment of failure, of having let the chance to educate someone on Italian culture slip away. 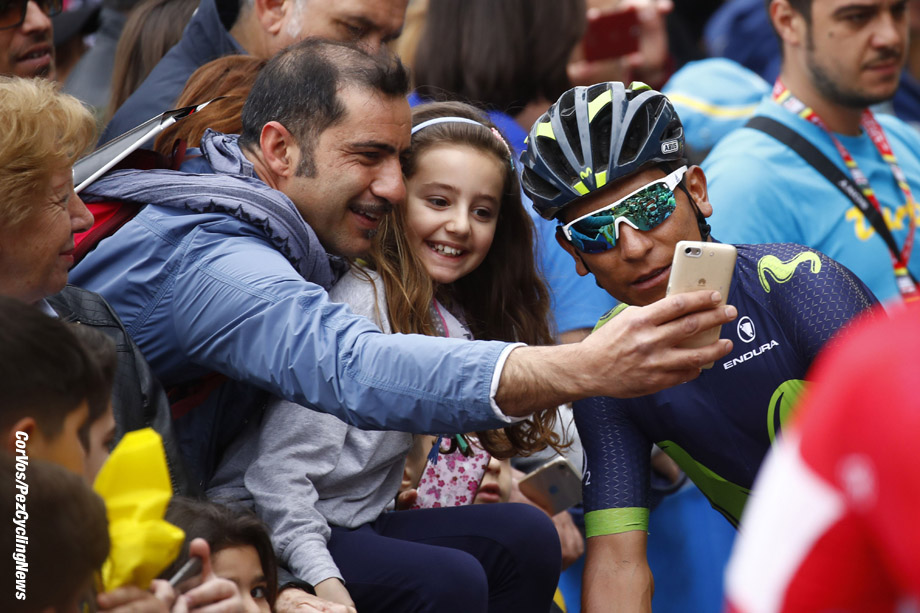 As I slipped into a small trattoria later that day, it dawned on me. Martin’s foray into the madness of Italian life wasn’t colored by any preconceived notions or expectations; there was no rule book he followed, no protocol to answer to. He stepped into the daily disruptions that define Italy and stepped out in perfectly good shape – one may say even better. And that, I would say, is a perfect way to experience Italian culture and the Giro. 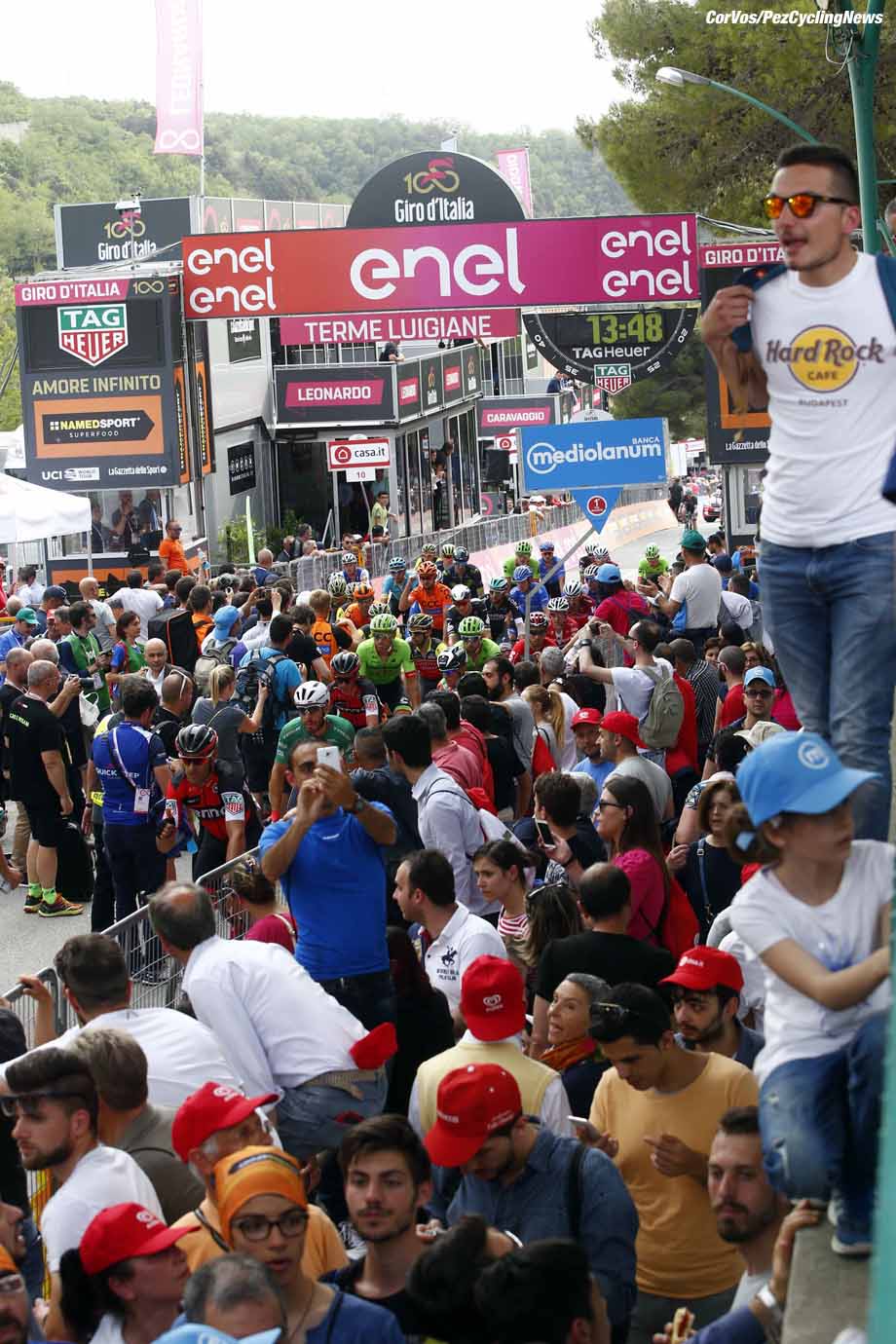 Peter Easton: For over a decade, Peter has shown his guests the best riding, dining and hotels for cyclists across Europe, and is an expert in the rides, roads and races that make up the Spring Classics and the Grand Tours.