It’s a great time to take your bike to Europe, see a big race, eat well, stay in swanky hotels, and let someone else handle the details. Sprocketmonkey will handle the details for you, your riding, and even entertain your non-riding better-half, while lodging you in design hotels and feeding you at hip restaurants along the way. As the name suggests – they’re a little different…

WHAT’S IN A NAME?
With many European bicycle tours, the tour guide often gets off the plane with the clients. But at Sprocketmonkey, a new Amsterdam-based tour group designed for serious cyclists, the owner and tour guides all call the Continent home. 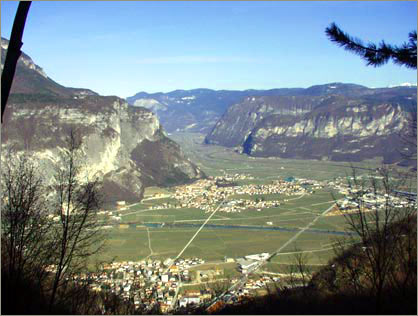 Sprocketmonkey’s tour to the 2004 Worlds will feature rides past Italian vistas like this.

The name immediately sets them apart from other tour companies. “When I was racing in high school my training partner’s Dad always asked us why we didn’t play real sports. He always referred to us as sprocket monkeys. I was doing different things then and I thought it was fitting now.” says Ramroth.

“I got the idea for Sprocketmonkey one day while training along the Amstel River,” says owner Aaron Ramroth, a Colorado native who moved to the Netherlands in 1998 on a whim. “I really wanted people to see what I was seeing and experience the things I was experiencing. It’s all about providing stellar cycling coupled with affordable European luxury – the stuff you can only know about from living here.”

Still in its neophyte year, Sprocketmonkey is offering two tours, both of which take in highlights on the professional racing calendar and overnight in some of Europe’s best-known design hotels. A seven-day tour in August will roll through the flatlands of the Netherlands and visit the Ronde van Nederland, while a week-long September jaunt in Italy will see the professional World Road and Time Trial Championships. 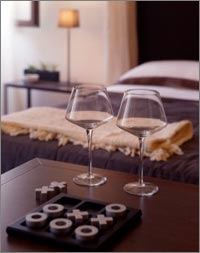 Design Hotels, You Say?
“Design hotels are the rage in Europe. They add that extra element of comfort and style to make the tours especially unique. As we say, ‘Ride and Relax in Style’”, says Ramroth. “On our Ronde van Nederland tour we’ll stay in the hippest design hotel in the region, The Blakes Amsterdam. It’s one of the most unique canal houses in the city. The place just bleeds style. It’s a mix between classic Amsterdam and hip, trendy Asian design. The hotel is designed by top UK designer Anouska Hempel and each room is crafted in its own style”. Sprocketmonkey has also selected some pretty unique hotels in Italy for their 2004 UCI World Championship tour. “Our clients will experience the only design hotels in Venice. They are outfitted with the ultimate in Italian designer furnishings with amazing attention to detail.”, he says. “The hotels we’ve chosen are the leading design hotels in Europe,”he adds.

Good Food, Massage, Mechanics and Coaching
Ramroth’s taken a similar tack arranging restaurants: “It only stands to reason that eating better will make you go faster,” he says. “We’ve got the latest hits in restaurants in all the cities we will be visiting”, Ramroth adds. If the food isn’t enough, daily massages from licensed massage therapists can help. Mechanics will make sure your bike is having a good time too. On their Italian tour Sprocketmonkey is adding a bit more with a certified USA cycling coach who is also a premier coach with the leading training group that has coached recent winners in the Tour de France. You’ll get the chance to get some solid advice on eating, training and riding better. 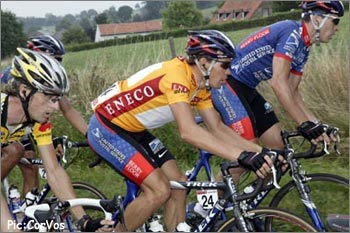 The Tour of The Netherlands and 2004 World Championships are featured trips this year.

What About My Non-Cycling Better Half?
Still, all this style can’t be enjoyed alone, so Sprocketmonkey’s arranged companion tours for significant others that couldn’t tell Eddy Merckx from Eddie Haskell. While one half’s sweating over a mountain pass, the other may be sipping local wines, enjoying a rubdown at an exclusive day spa or getting a quick lesson on Berlage architecture.

“Our whole goal is to give both partners a tour like no one else can offer – whether it’s a bike tour company or a traditional tour company. We live here. We work here. We know what’s cool and we know what’s already over-run,” says Ramroth emphatically.

The non-cycling tours will take in some pretty unique excursions to rival the cyclists’ days. “We’ve got the partners sorted. Our Dutch tour will feature an exclusive look at the centuries-old windmill farms just outside Amsterdam plus one of the most important days on the culinary calendar in Holland — Preuvenemint, a tasting event in Maastricht just near the Belgian border” 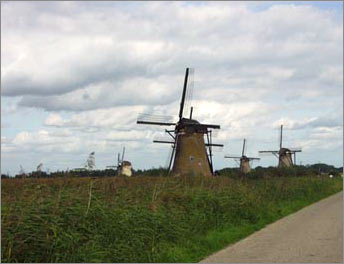 Cycling in Holland is among the most scenic – and relaxing – in Europe.

But cycling is still the focus. A former Cat. 3 rider currently racing in Europe, Ramroth went to college at Colorado State Universtiy in Fort Collins where he faced national champions and international stars in the town’s weekly training race. Jonathan Vaughters, Randy Whicker and Bobby Julich were common faces on the Colorado race scene.

“I had my good days and bad days, but those guys always seemed to have good days,” Ramroth says.

After finishing his degree in political science, Ramroth moved to Denver to start a career in computers that would eventually land him in Amsterdam, designing servers and networks for one of Europe’s biggest cable companies.

It was in Amsterdam that he met his wife, Nensi, a native of Croatia. With years of experience in the tourism industry, she’s the perfect partner to assist in putting together the non-cycling partner tours. Nensi recently left a job with the Croatian Board of Tourism to take a spot in a specialty travel office in Amsterdam.

“Aaron says he’s really good with the cycling end – and he’s got the shaved legs to prove it. I think he’d be a little lost arranging a cheese tasting in the Toscana. Not everyone wants to spend a day touring a bike factory,” Nensi says.

Sprocketmonkey is already looking forward to 2005, with tours planned to the Spring Classics, Denmark, Norway, Tour de France and Vuelta a Espaсa. A seven-day mountain bike tour of hilly Slovenia, once a part of the former Yugoslavia, will be one of Ramroth’s favorites.

“These aren’t the kinds of tours you can plan from an office in the States. On our tours, we want you to feel what it’s like to live and ride here, ” he says.

Homeboy Espaсa: When It Rains…