For once our man Ed Hood’s holidays didn’t involve bicycles – but they did involve bars. When the Pezmeister first heard Ed was off to parts foreign he thought it would be a good opportunity for our intrepid journo to sample Negronis across the globe – but. . .

Me: ‘Huh ! I’m going to Australia, Boss – if I order a Negroni up country in Oz I’ll get beaten up!’ 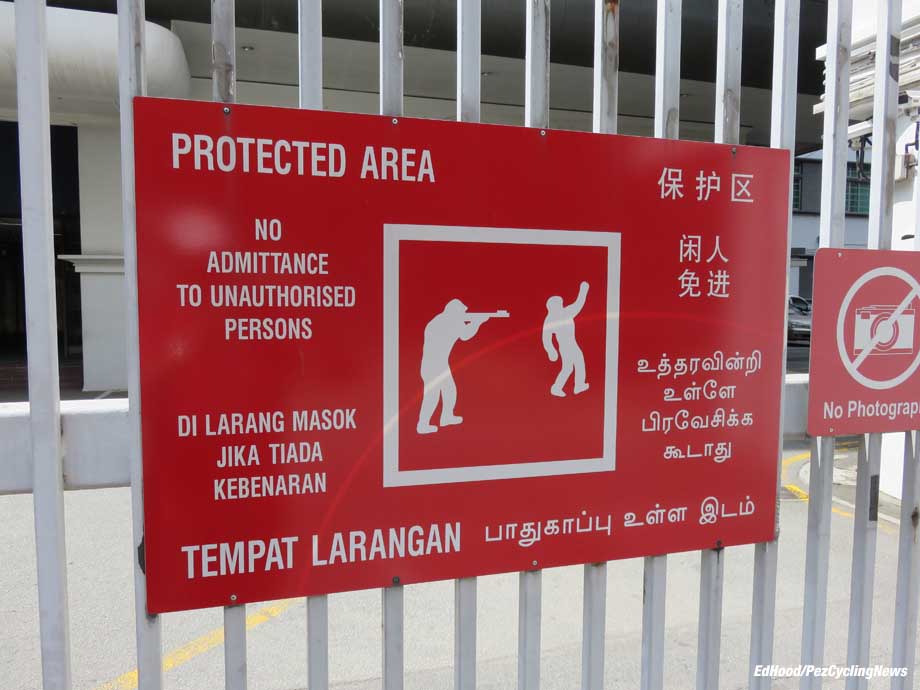 First up was Singapore as our stop off en route the Antipodes; a city state where they don’t sell chewing gum, strikes are banned and trespassers are shot – but apart from that. . .

It was the scene in 1942 of perhaps the British Empire’s most humiliating defeat as ‘Fortress Singapore’ fell to the Japanese who attacked from the inadequately defended landward side. The garrison’s huge defences all anticipated a seaborne attack – but the high command got that one very wrong.

Our hotel was in the heart of ‘Little India’ where the clothes shops have a guy with a sewing machine sitting outside in the heat on the pavement to make any alterations on the spot – they got the drop on us there. 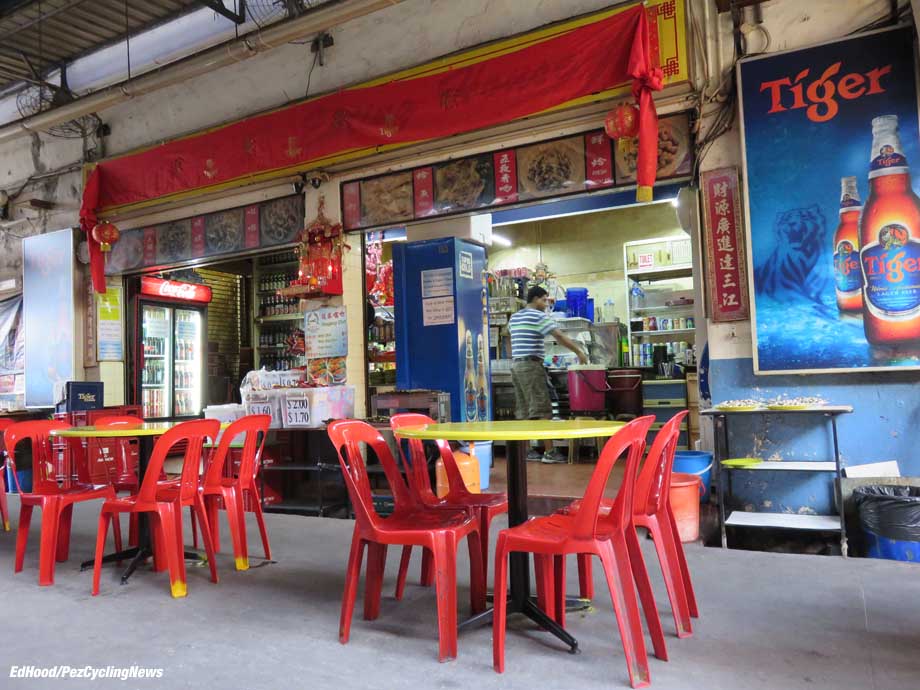 Right around the corner was our ‘Bollywood’ bar – well, more of an alleyway, really. But there were plastic tables and chairs, a crazy barmaid, a weird movie with a skunk on constant loop and cheap BiG bottles of cold Heineken – a nice beer.

Marlene had a Coke Lite – she’s not a beer girl. 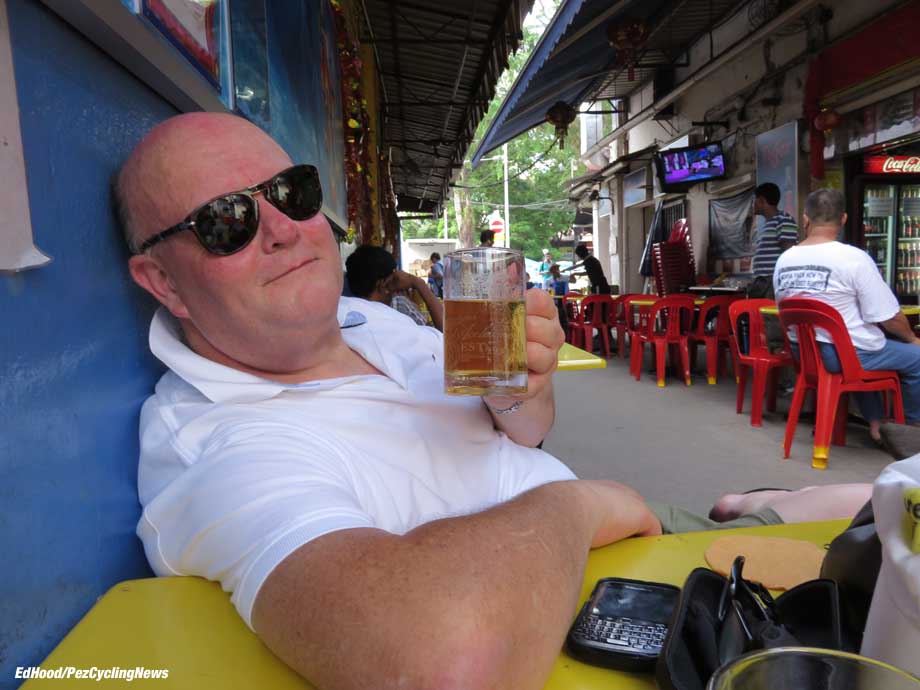 I relaxed, happy with my Heineken – I know a good bar when I see one. Meanwhile, Marlene held her bag close to her chest, eyes darting from side to side for escape routes when the riot kicked off . . . 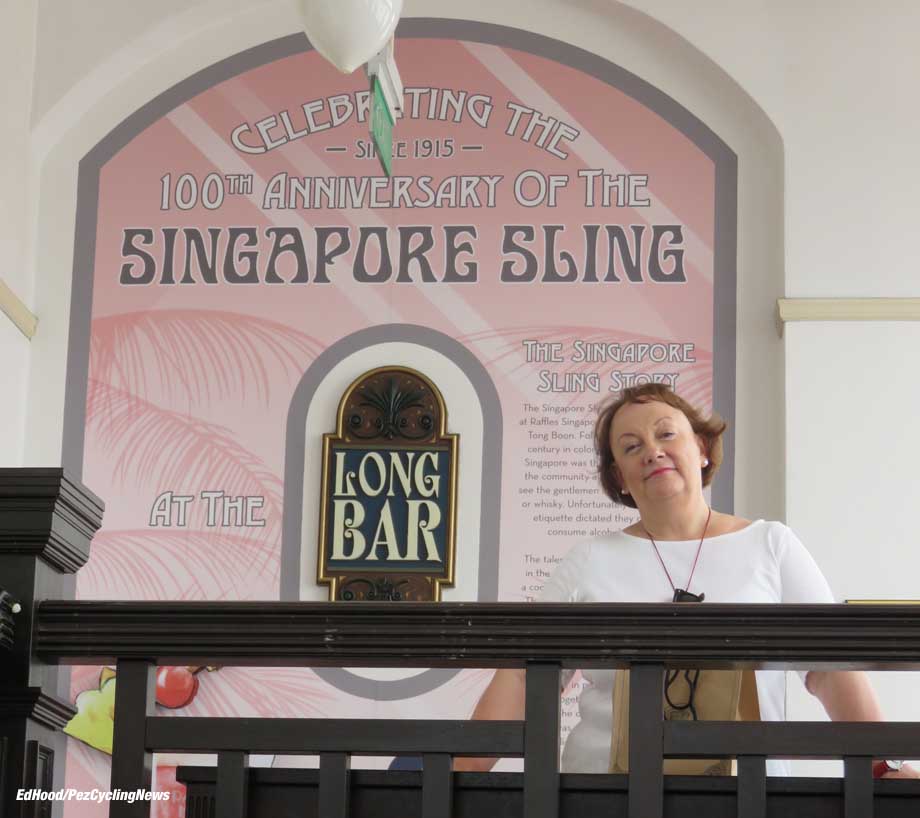 We went on a bus tour of Singapore; more of a propaganda exercise, really – I can now recite the Singaporean statistics on owner-occupancy, employment rates and pension provision.

We cracked at the Botanic Gardens, as the other victims looked at the orchids; we headed for Hailia a nice quiet cocktail bar where no one was hitting me with any details of the city’s latest sewer up grades. In the interests of financial damage limitation, I had a Tiger beer, ice cold and right on target. Marlene had, yup, you guessed it, a Singapore Sling – which is gin, lime juice, bitters, cherry brandy, Cointreau, Benedictine, Grenadine and pineapple juice. The Tiger helped but the bill still came to $59 – though she loved her cocktail. 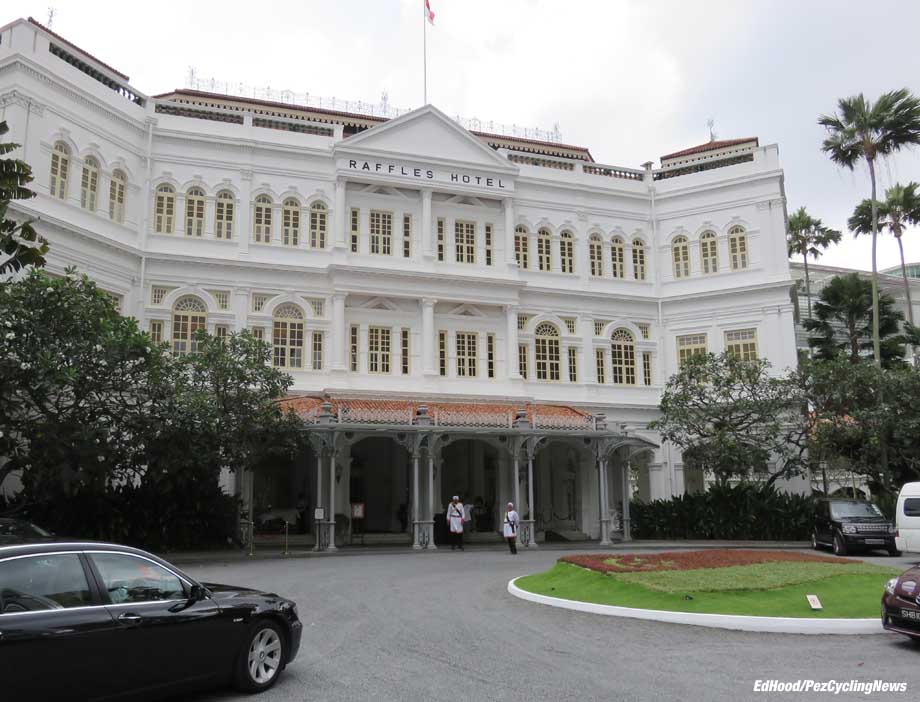 If you go to Singapore, part of the ritual is to visit Raffles Hotel, a relic of the days when; ‘one third of the map of the world was coloured pink’ – to denote that Great Britain had stolen it from it’s rightful owners. Those were the days; servants who didn’t talk back, long lunches and Singapore Slings and peanuts at Raffles. 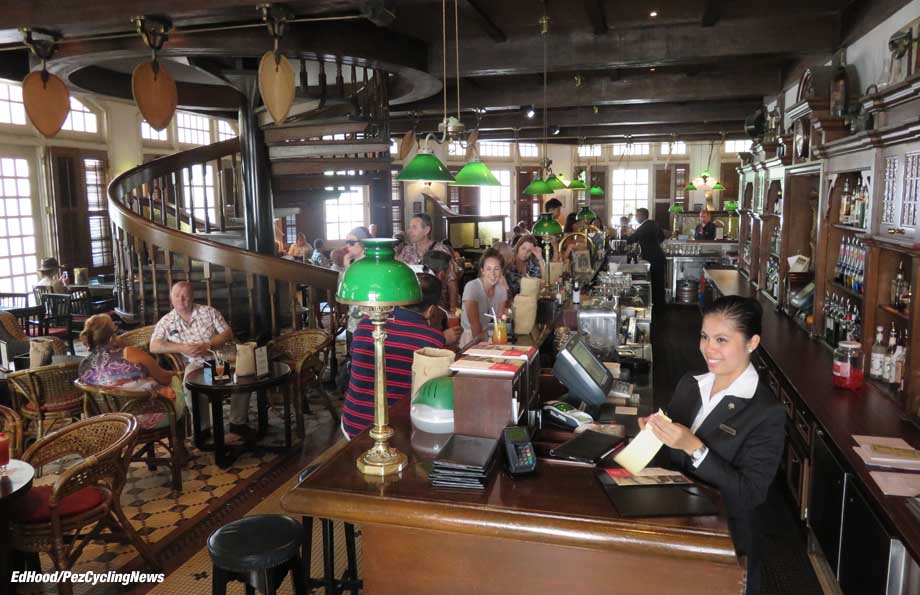 We had hope not to like the place but despite the tourists – of which we were two – and the crazy prizes – now way over $60 for a beer and a cocktail, we loved it. The hardwood, the brass, the long bar, the skill of the bar men, the overhead fans and the sheer thrill of being in one of the world’s great bars – fabulous. 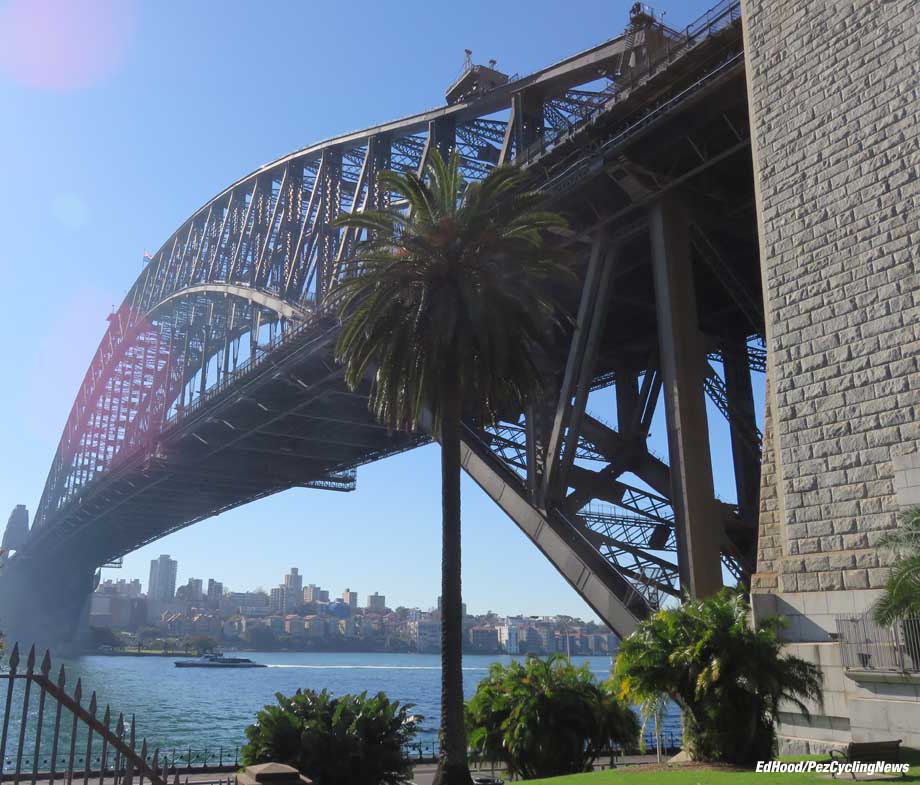 Sydney is much like any big city – until you get to the harbour, that is. The bridge is magnificent with it’s huge curve across the narrows, proliferation of rivets and sheer bulk – an engineering wonder. And when you see the gorgeous Sydney Opera House in the same field of vision it’s stunning – hard to take in you’re actually there. What you need is a drink so you can sit and absorb it all – The Harbour View Bar is the place and Toohey’s ‘New’ the beverage – golden, cool and smooth a lovely local beer. With an Australian Syrah for the lady. 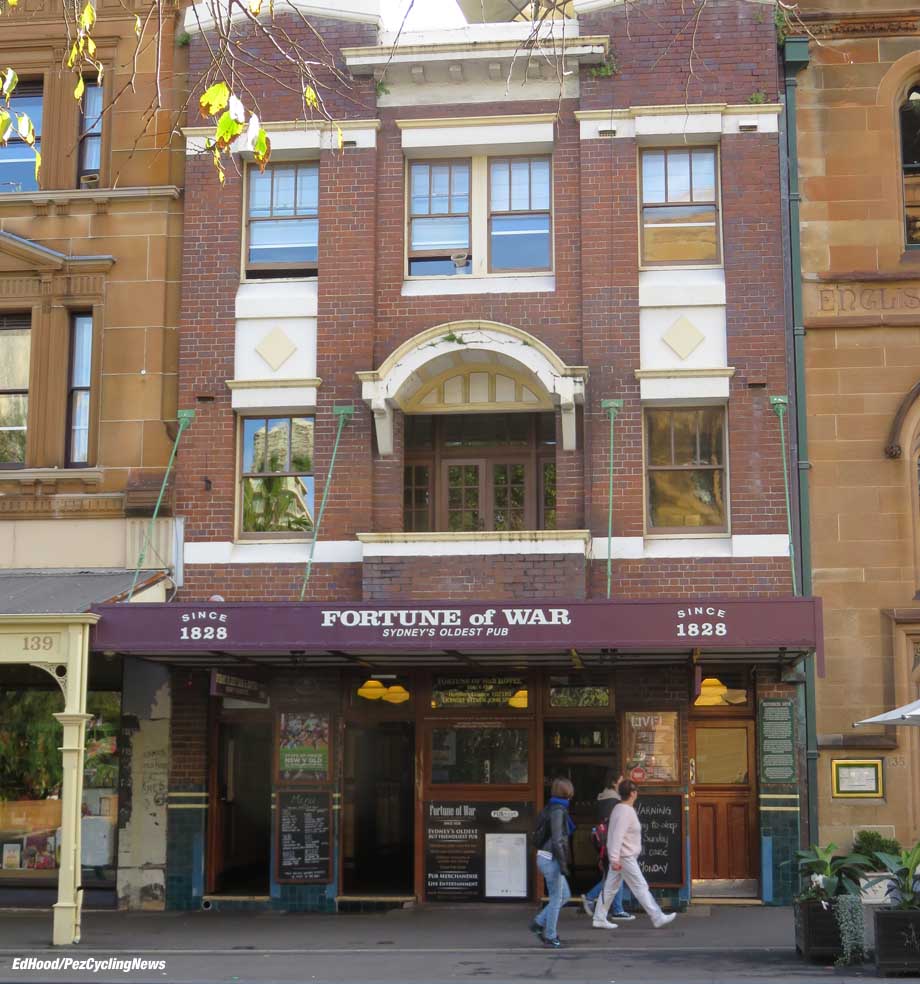 On the approach to the bridge is ‘The Rocks’ so called because the roads were hacked out of the solid rock. One of Sydney’s legendary boozers and the oldest, to boot is to be found there – ‘The Fortune of War.’ It’s like stepping back in time, old glazed brown and white tiles, polished wood, old guys looking at the horse racing pages in the newspapers; “a schooner of New please, young lady” – I could blend in here real soon. 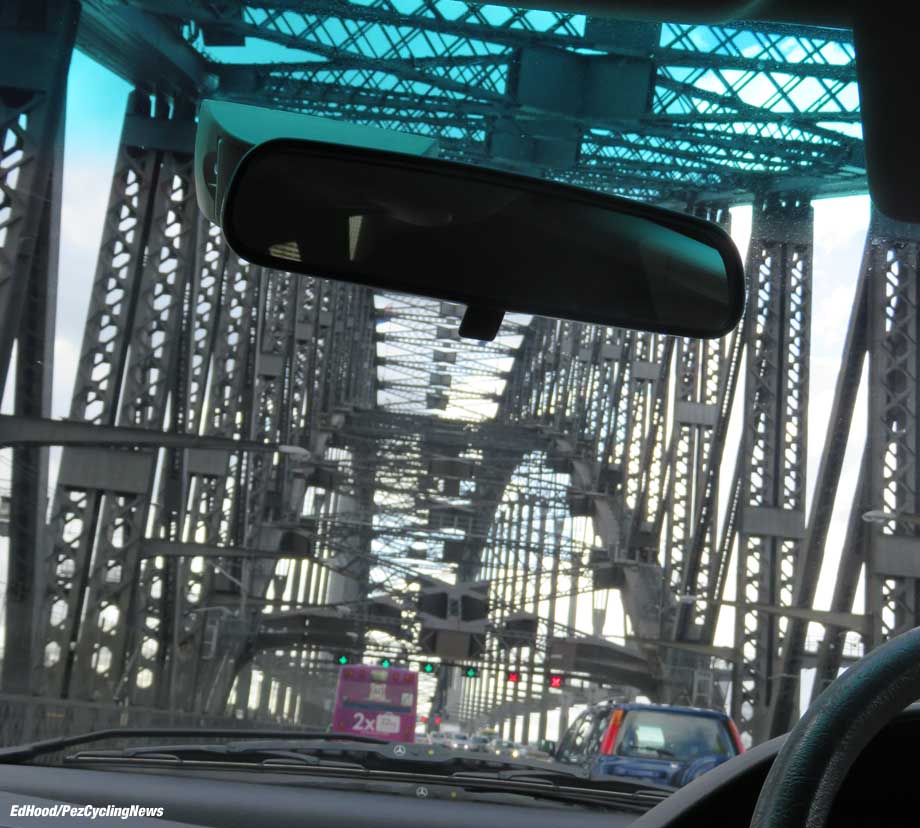 You can get the ferry across the harbour to the village of Manly – so called because the English who first caught sight of the Aborigines who lived there thought they looked, ‘manly’ and go up to Palm Beach from there. Or, you can cross the Harbour Bridge and drive, ‘the long way round.’

We had lunch – with a local pale ale – at the ‘Boat Shed’ which spans the beach and reaches out on to the water. If you find all that ferry and/or car nonsense a tad tiresome then you can get the float plane straight here from Sydney. If you haven’t got a spare couple of million then you’re not gonna be a property owner in Palm Beach – but hundreds are with every imaginable style of architecture on display; where did I go wrong? 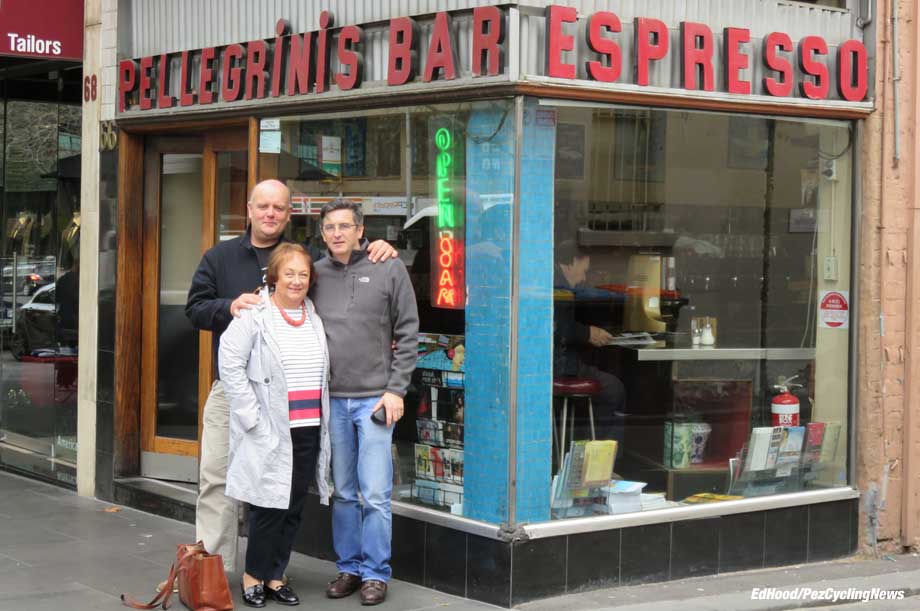 Melbourne considers itself a more genteel city than Sydney and there’s certainly a European buzz to the place; wide streets, less mega hi-rise, lots of book shops and a great street cafe scene. One of the legends is Pellegrini’s, unchanged in 70 years and still dispensing the finest Italian fare – and coffee to die for. Bobby De Niro drops by if he’s shooting in town – and Billy Joel if he’s gigging in Melbourne. I had to be prised out of the place. 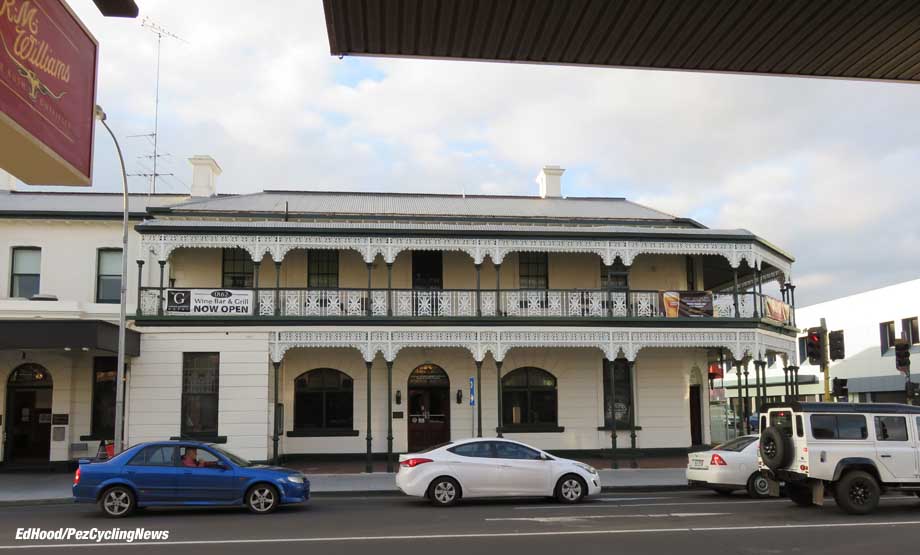 Mount Gambier is a sprawling, wealthy, country town where every third vehicle is a Ford or a Holden pick-up truck, so cool and in great colours; I liked the baby blue and the orange. The Mount Gambier Hotel is the oldest licensed premise in the state and has a wonderful first floor veranda running around its roadside elevations. To sit out there catch the breeze and watch the world go by of an evening with a Castlemaine XXXX was special. And not a bad beer at all. 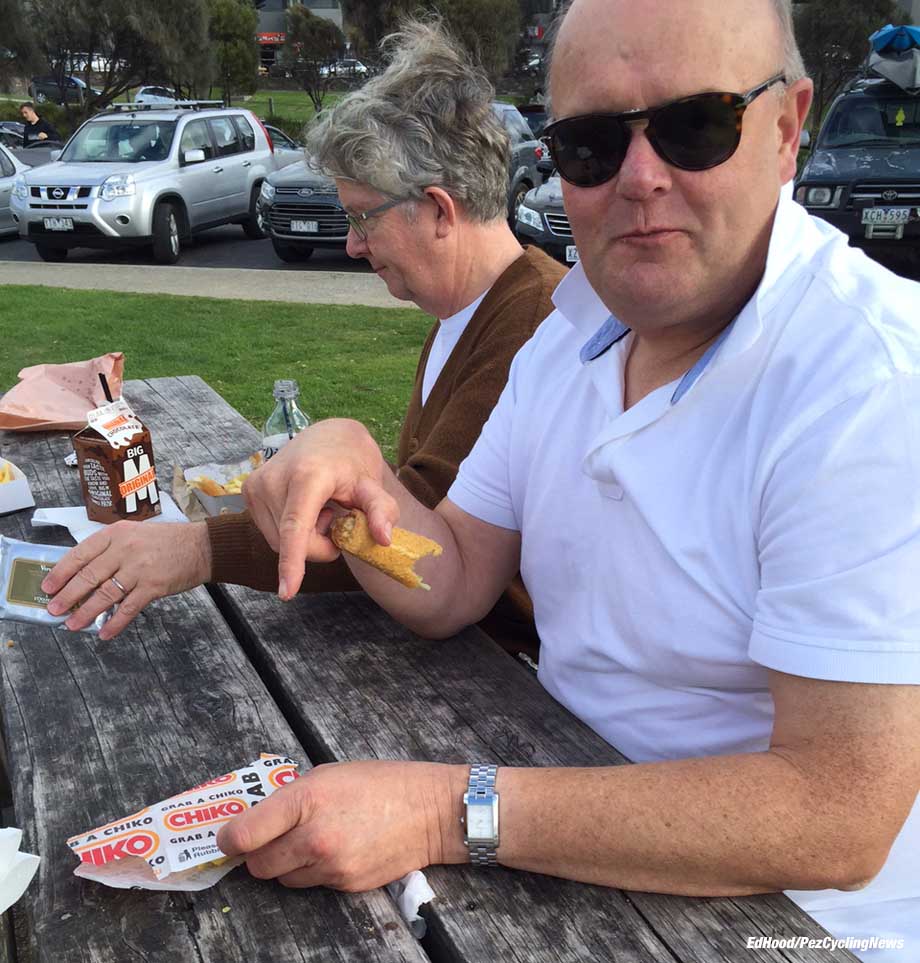 And did I mention my chico roll which I scoffed whilst watching the surfers at Lorne, no?

Like a giant spring roll you’d get in a Chinese restaurant but the wrap which holds it all together is deep fried and chewy – man’s food. 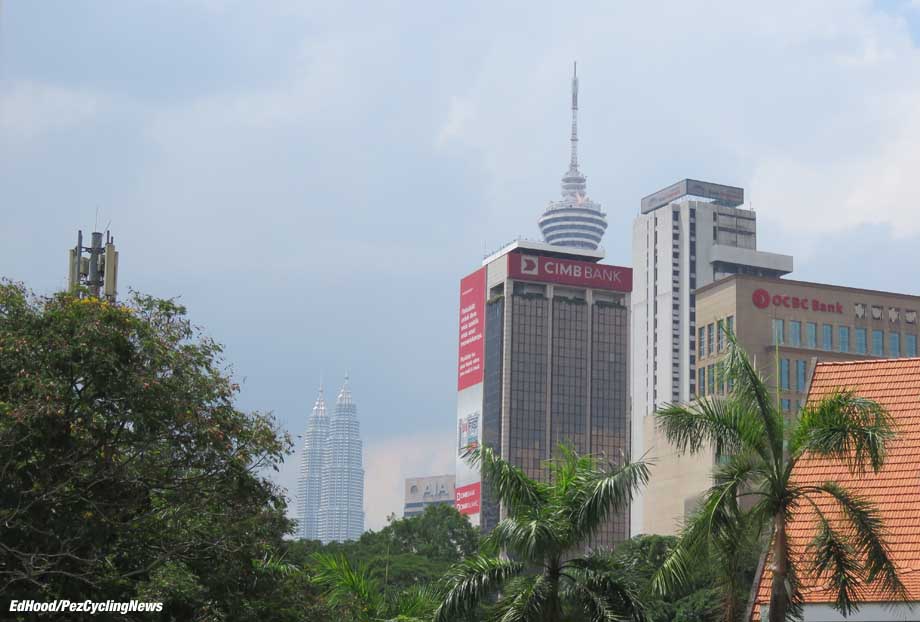 Kuala Lumpur, home to demon keirin riders Azizulhansi Awang and Josiah Ng and the fabulous Petronas Towers – our stop off on the way home from Oz. And there was ‘Genting Highlands’ as in Tour of Langkawi on some of the road signs – I’d have liked a run up there but time didn’t permit. There was more of that colonial vibe going on at our hotel, The Majestic. 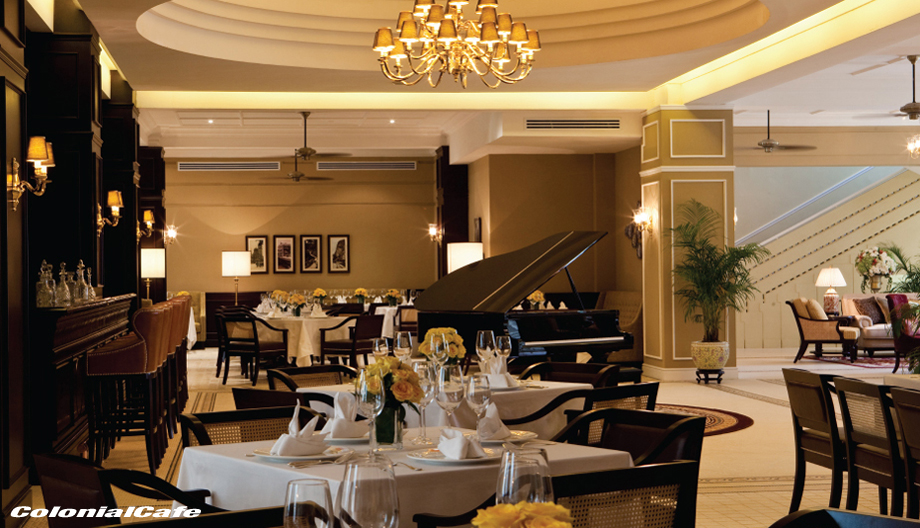 The bar is in fact called The Colonial Cafe – hardwood, mirrors, a beautifully arranged gantry, live jazz with a singer/pianist who sounded like Carmen McRae – and ice cool Tiger beer.With a Malaysian Colada for the lady – coconut cream, bitters, cream, salt, golden rum, pineapple don’t spoil it by asking the price . . . 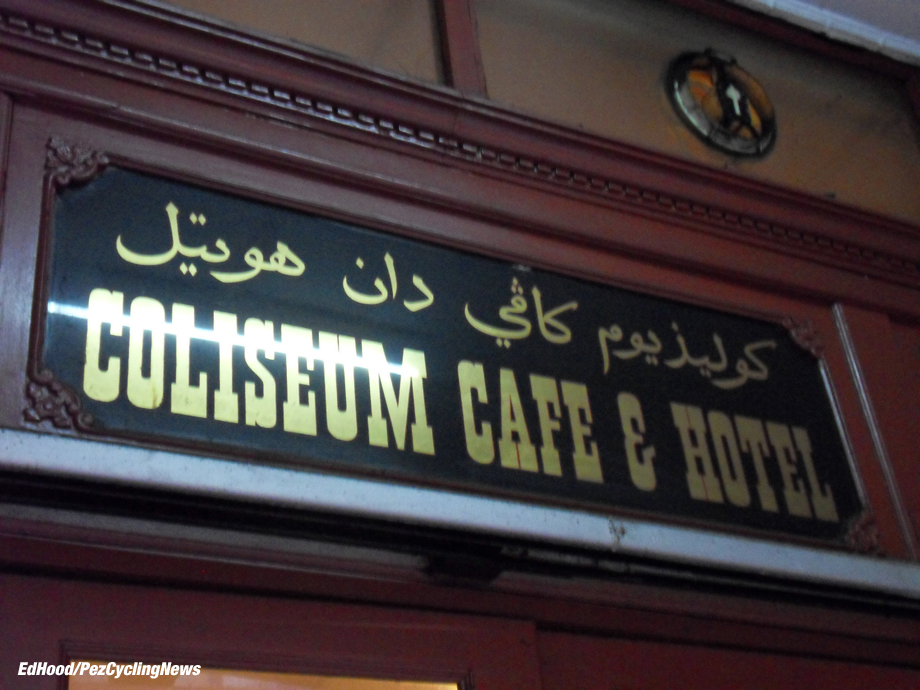 And last but by no means least, the jewel in the crown and a hang-out of famed English novelist, W. Somerset Maughan. Slide in to this air-conditioned oasis to beat the heat, the traffic noise and thumping ‘Bangla’ from the beat boxes outside the clothes shops just up the road – one dude even has a loud hailer to implore customers in for the best bargains in the city. 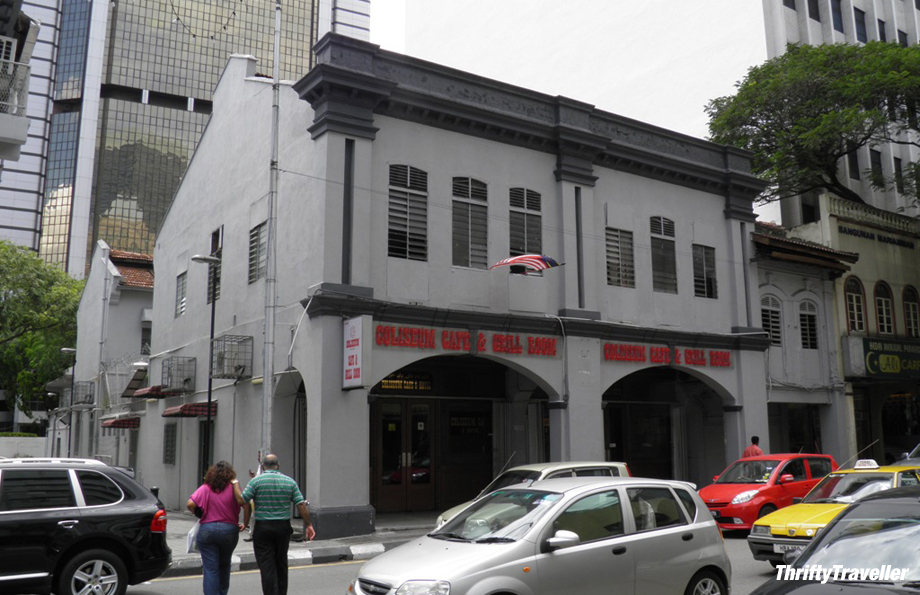 The Coliseum Cafe – unchanged since 1921 and still a fave for ex-pats who come in here just after five in the afternoon to avoid KL’s totally horrific traffic jams. The noise and heat are soon forgotten as you settle into your seat; no need to ask for another ice cold beer; “you will need another Tiger, sir?” says the man as he takes the empty mug away – my kinda place.

Perhaps not for the girls tho’ and it wasn’t easy to drag my feet back out onto the heat and noise on Tunku Abdul Rahman. Almost time for the plane home to Edinburgh – there were other bars but those were the best,

Maybe I should do a piece about my favourite bars in Edinburgh, some time . . . 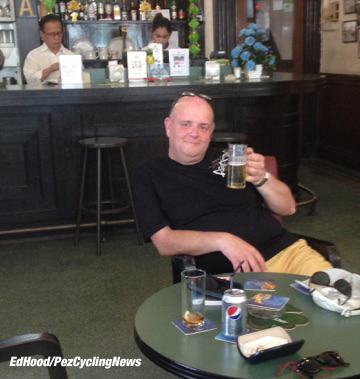