We’ve reported on the ascent of this fabled mountain a few times, and even climbed it ourselves, but never have we indulged in the personal suffering that precedes acceptance into the elite club of climbing Mt. Ventoux three times in one day…until now.

This year we thought we’d better get someone from the PEZ team into a rather exclusive club of climbers. In June, our man at the Dauphinй Libйrй took on the challenge.

About half way up the north face of Mont Ventoux, as the road pitches up to the start of a 4-kilometre stretch of 9.5% gradient, I finally crack and shift to the last gear of my cassette. 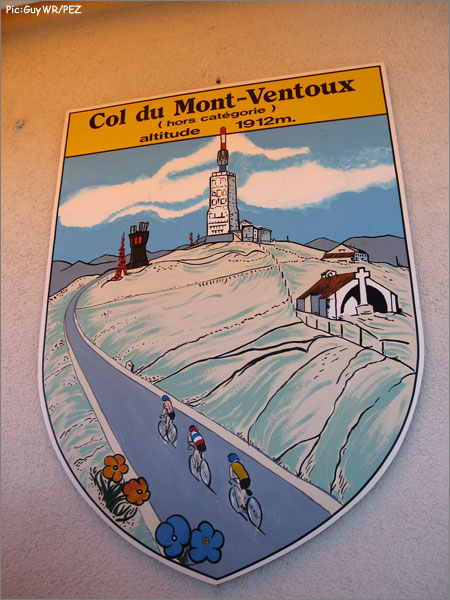 The one and only.

I had been saving that final gear for the toughest parts of the ride but with one ascent already completed, this one still to finish, and a third climb to do as well, it seemed somehow too early.

My guide for the day, Craig from VeloVentoux, riding just in front of me, looked super strong, as one might have expected from someone who gets to ride this mountain whenever he likes. But he too was working hard, pushing a 36×27. 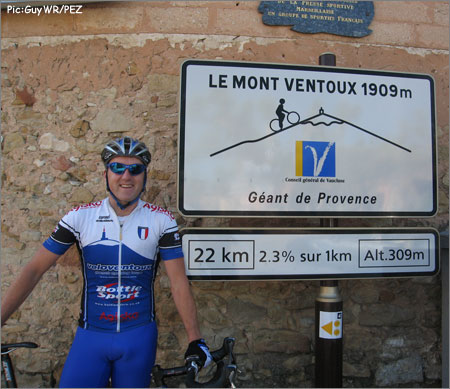 Still, even with my 25 – and quietly grateful that my rental bike had a triple – there was little relief to be had on the steep slope. We were 10 kilometres into the ascent from Malaucene, with 11 still to go. Which is probably how this crazy ride got its name. 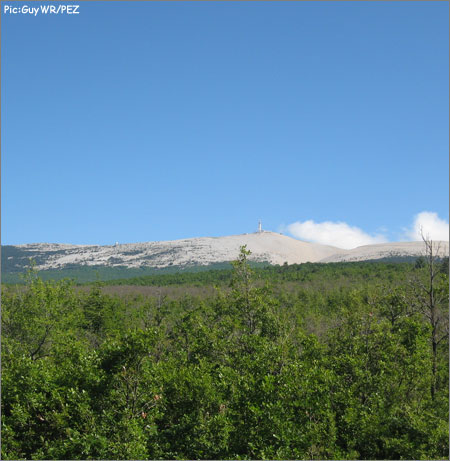 The Club for Crazies
The Club des Cinglйs du Mont-Ventoux, to use its French title, was started in 1988 by Christian Pic and has over 2,100 members: just over half are French, followed by Belgium, the Netherlands, Italy and the US. Joining the club is simple: climb to the summit of Mont Ventoux three times in one day, once by each of its three access roads. Yep, that’s it. 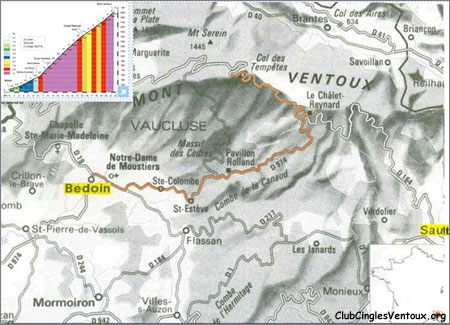 There are four ways up the Ventoux – three paved, one dirt (that’s a whole other story). Highlighted is the ‘traditional’ route up from Bedoin.

On paper the membership route looks tough. It’s not the 136 kilometres that’s the problem – it’s the fact that half of this is climbing. The classic route from Bedoin is 21 kilometres at an average of 7.5%, from Malaucene the same, and the third ascent is 26 kilometres at a merciful 4.7%. Mont Ventoux is 1,912 metres at its summit and the vertical distance for each route is 1,610m, 1,570m and 1,220m respectively for a total of 4,400 metres of climbing over 68 kilometres. This year’s Etape du Tour was only 2,612 metres over 39 kilometres. Cinglй in French means ‘crazy’ and has the synonym fou, ‘mad’. The Club des Cinglйs du Mont-Ventoux is literally a club for mad crazies. 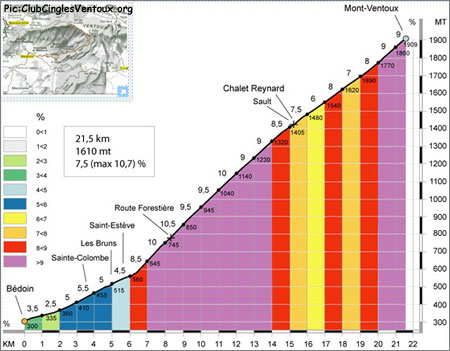 Up up and away from Bedoin.

Bedoin
Craig and I start early, rolling from where the van is parked in Malaucene around the base of the mountain to Bedoin where the climbing begins. This route up Mont Ventoux is the most famous, the ascent used most regularly by the Tour de France. It has hosted storied climbing time trials by Charly Gaul, Jeff Bernard, and Jonathan Vaughters, as well as spectacular defaillances that have cemented its reputation as an epic climb. 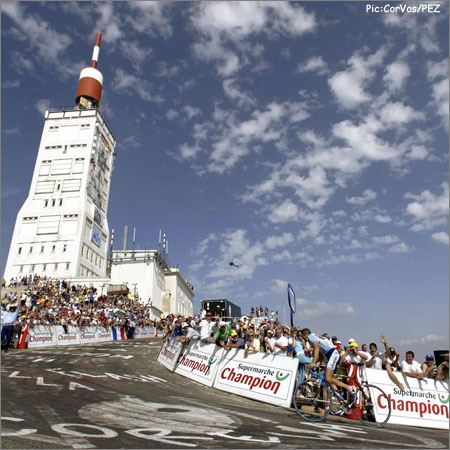 That last bend is wicked steep.

Mont Ventoux made its debut in the Tour in 1951. In 1949 it was first introduced to the Critйrium du Dauphinй Libйrй route and has been a regular climb as part of this regional race – just not this year, unfortunately. I wonder just how tough it is, especially with the new tarmac put down in 2004 still looking fresh. Craig has been running VeloVentoux for a number of years now and has ridden most of the climbs in the region and the most well known in the Alps. His conclusion: tougher than the Galibier. 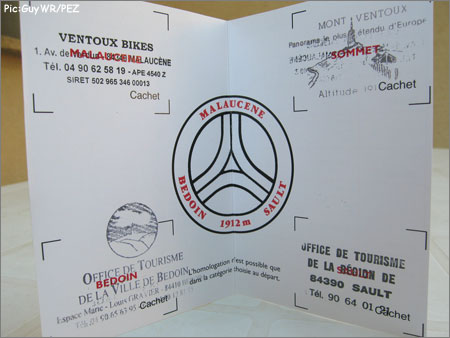 We collect our first stamp on our route cards from the tourist office (300 metres elevation) and check that our official plates are well secured to our bikes. Then it’s a gentle roll out along the quiet country road: surrounded by grapevines and bucolic rural scenes, an easy faux plat at less than 5% gradient. The summit looms to our left, a long way away, but the riding is easy. 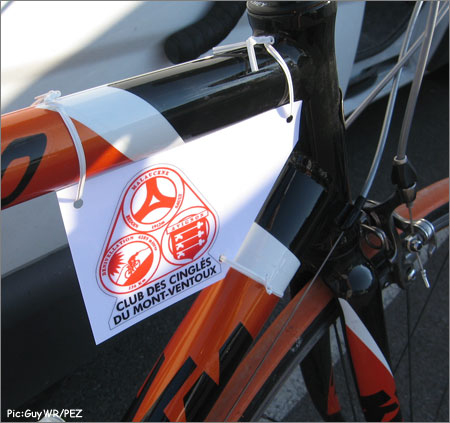 Too easy. At Saint-Esteve the road turns a corner and immediately pitches up over 8%. What follows is a long, long 9 kilometres of ascending through the forest with the grade always 9% or over. It’s tough climbing but my legs are fresh and I’m buoyed with the excitement of riding such a well-travelled mountain. Finally, after 15 kilometres we’re at 1,400 metres and are greeted by Chalet Reynard, the ‘hotel, bar and restaurant’ nestled into the mountainside just as the forest gives way to Ventoux’s famous moonscape. 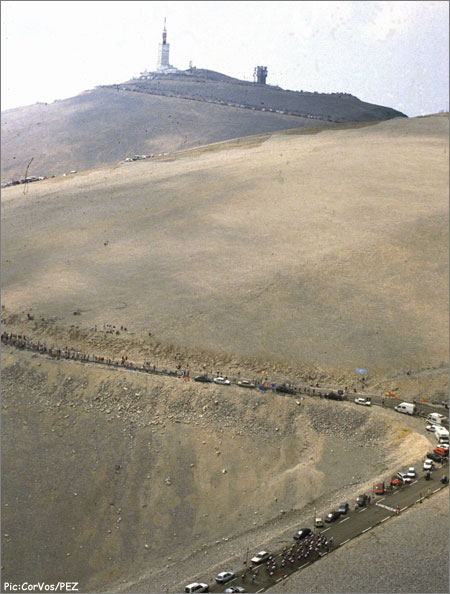 We press on to the summit, along the wide-open road, trying to keep a steady forward momentum whilst taking in the breath-taking view. A pause at Tom Simpson’s memorial is essential, possibly the most visited monument in cycling’s history. There are various offerings today, which are cleared away on a regular basis by the local authorities but which doesn’t deter its many visitors from leaving bottles, tyres, caps, jerseys(!) and various other souvenirs. It’s hard to know how to respond to seeing the monument and thinking about what it signifies – no doubt different for every visitor. Nearby graffiti on the road, ‘1967-2007, nothing’s changed’, provokes more questions. 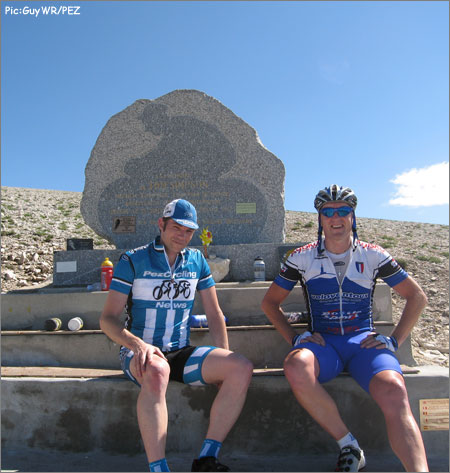 The summit, so agonisingly close to Simpson’s memorial, brings us some much-needed relief. Mont Ventoux is truly unique in that it towers over its surroundings and the view is absolutely stunning, all encompassing and seemingly endless. Cyclists continue to stream up, despite it being a weekday in June, and the candy and souvenir sellers are doing a brisk trade. 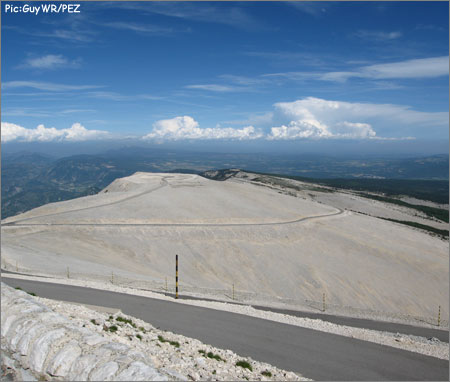 But we have little time to pause, already behind schedule due to photo stops and our first ascent no where near close to Charly Gaul’s 1958 effort of 1h02′09″ – still a remarkable performance as an amateur rider will do well to break 90 minutes. It’s a fast descent to Malaucene. I take it easy on my rental bike, but Craig flies away at reckless speeds between the hairpin corners. I have no speedo on my bike, but it feels close to 80 km/h. 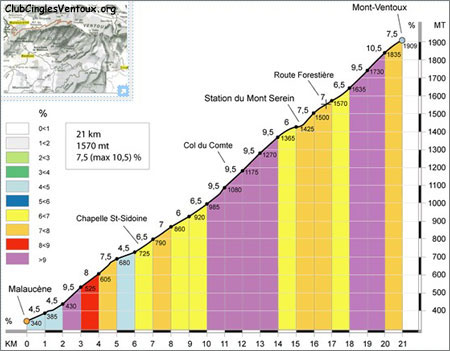 Malaucene
Unfortunately, we are riding the same road down that we have to come back up again. Fast speeds down equal slow speeds up, which proves to be entirely accurate.

Although this ascent mirrors the Bedoin route in terms of gradient and distance it feels tougher. Gone is the exuberance and adrenaline of the first climb. This one is simply a long, slow slog with the tough section close to 10% feeling like double and I’m thankful to shift to my small gear. By half way up, though, we have 30 kilometres of climbing in our legs – and that’s a tough day on the bike by any account and I’m in no mood for harder gears. 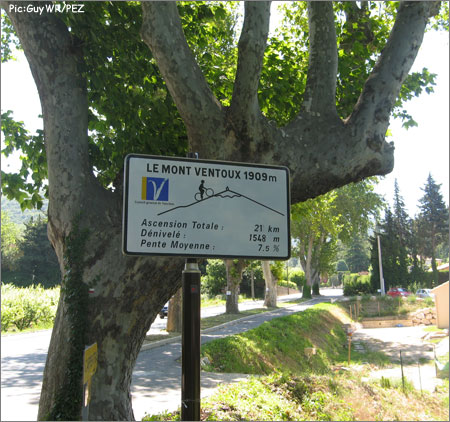 Craig keeps me distracted by pointing out various geographical features, like the valley road that we had ridden the day before, looping through endless vineyards and over small cols along back roads devoid of any cars in some kind of fantasy cycling world where everything is perfect.

We stop at the ski station of Mont Serein, on the side of Ventoux and 6 kilometres from the summit, which hosted the stage finish of this year’s Paris-Nice. Cadel Evans made the climb in a little less than 40 minutes, which we fail to challenge with our hour-long ascent. 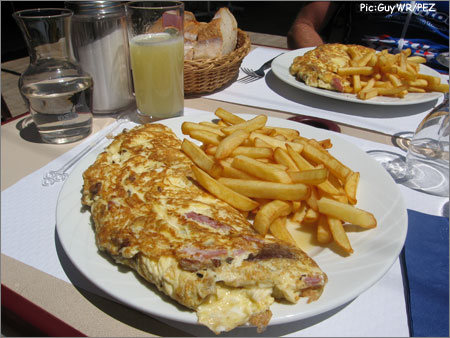 The second visit to the top of Mont Ventoux this time brings only relief. We head quickly over the top to the agreed lunch break at Chalet Reynard. It is quite possible that two cyclists have never been hungrier. 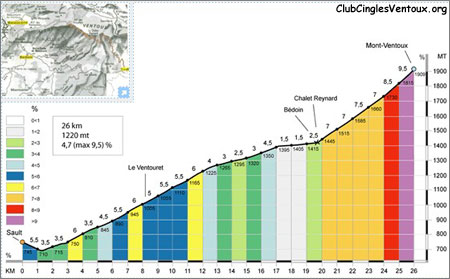 The climb from Sault.

Sault
The sun is shining, the sky completely blue and Chalet Reynard has a seemingly endless supply of rejuvenating Coca-Cola and citron presses. The ‘Omelette Ventoux’ seems the appropriate choice for lunch and its size certainly does not disappoint. Soon loaded up with calories and fighting off the fatigue of tired and cramping legs from trying to get back on the bike after five hours of riding, we head downhill to Sault, the famous lavender growing town for the final stamp on our route cards. 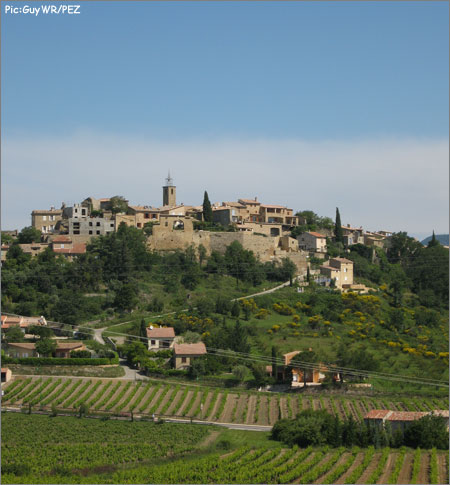 The local bar in Sault, packed with cyclists sitting under wide yellow Ricard umbrellas, beckons but it is 3.30 in the afternoon already and we have the final ascent to make. Mercifully, despite clocking in at 26 kilometres and rising 1,180 metres, the average gradient of the climb from the town is only an average of 4.7%. 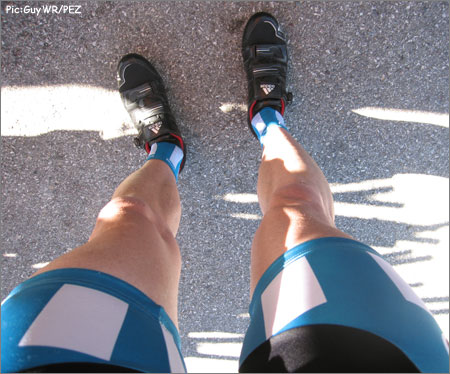 These legs endured a severe beating at the hands of Le Geant.

In the late afternoon, the roads are quiet and ours is a solitary challenge and we press on, trying to find that easy climbing rhythm and fighting a deep fatigue. The gradient eases half way up and I shift up to the 42 and pour on the pace for the relative flatness of the remaining distance back past Chalet Reynard.

Unfortunately, past the chalet, the wind has come up and the final 6 kilometres over the moonscape is a vastly different challenge from our first ascent from Bedoin. The wind is full in our faces, hindering every pedal turn. My arms and back are aching, which strangely provides a useful distraction from the dull pain in my legs. 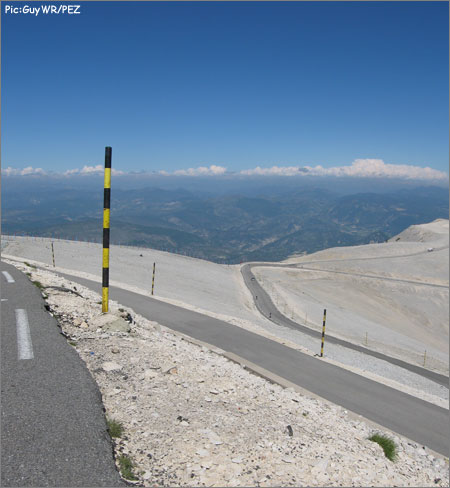 Onward again past Tom’s memorial and I touch my cap, just like Eddy Merckx did in the Tour in 1970 (before he collapsed at the summit and required oxygen) as a gesture to his former Peugeot teammate, but my legs are now cramping viciously. I’m in a private place of suffering and I refuse to succumb to the irony of having to step off the bike right next to this hallowed spot.

But the worst of the pain is fleeting and Craig leads me around the final right-hand hairpin to the summit – and I mock a short sprint for the benefit of onlookers. Three ascents completed! We pause for more photos, but my heart is certainly not in it. “Let’s get off this f—ing mountain,” I say. 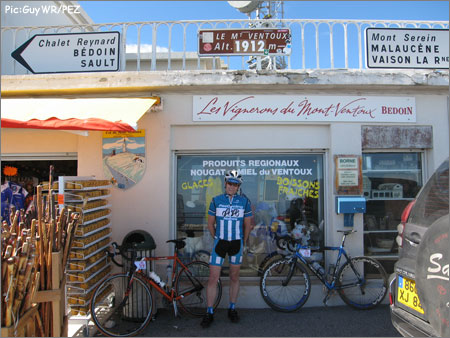 Can we go home now?

The final descent is a blur and it cannot be over quick enough. Safely back at the van, the ride completed, I’m delirious with fatigue but buoyed with elation and collapse on the pavement. I’m now a member of the Club des Cinglйs du Mont-Ventoux.

The Meaning of Crazy
My route card, certificate of membership, and fridge-magnet medal arrive in the post at home in Vancouver from Christian Pic. I am officially member number 2127 and the first New Zealander to join the club.

Monsieur Pic has scrawled on my certificate, ‘Galeriйn en 2009?’, asking me if I’ll be back next year to join the next level of the club – the three regular ascents plus a fourth, via the unpaved forest road from Bedoin. I suspect that’s one climb too many. 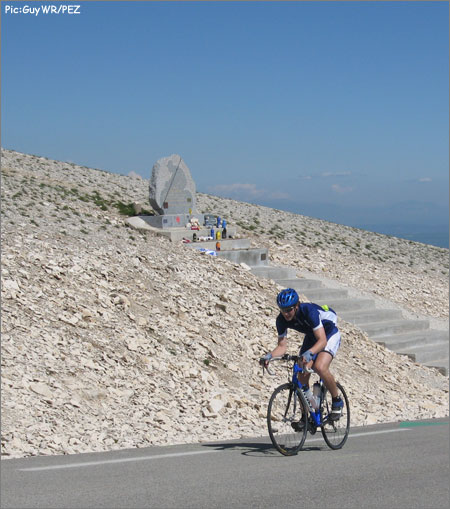 Three ascents of Mont Ventoux ranks as one of the toughest one-day climbing rides, a worthy challenge. But one of the top local amateur racers holds the joint record for an extraordinary feat: 11 ascents from Bedoin over a 24-hour period (although he gets driven down to save time). He apparently figures that, with the right driver, and presumably some incredible legs, that 12 ascents is possible. (Anyone who thinks they can do sub-90 minute climbs on a consistent basis, and has a fast car to get back down, feel free to step up.)

Which just goes to show, no matter how crazy you think you are – and even if you get a certificate to prove it – there is always someone crazier.

• To join the Club: www.clubcinglesventoux.org.
• To get looked after in true local style: www.veloventoux.com .

PEZ Interviews: The One & Only Michael Ball!