Like many cyclists my opportunities to get out on the bike are subtly balanced with the demands of family, work, and my complete inability to convince my better half that by going out for five hour bike rides instead of completing the decorating I started a year ago it’s actually beneficial all round – enabling her to change her mind yet again on the colour scheme.

So basically I have to use my time wisely – and although my racing days are firmly behind me (also due to a huge lack of talent!) I still like to push myself a bit, whenever I can. And so I found myself entering my first Gran Fondo in Italy recently as, I believed, the ideal way of mixing it up without having to really invest too much time beforehand getting fit….how wrong could I be.

Gran Fondo Tip No.1 – Make sure you get to the start early if you want to see the front and ignore all officials, road markings, signs etc. that might potentially put you in the correct starting position for your number. Dark shades on a wet overcast day! are useful for avoiding eye contact with fellow riders when pushing in. 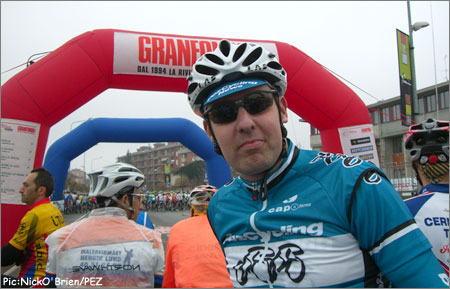 There might not be many bikers visible in this picture – but rest assured, there were thousands other crazies waiting to test their mettle.

Combined with a holiday I felt certain this was a perfect way to indulge in my sport without neglecting the family side of things – a win win as they say! I knew that these events took place throughout Italy all season and soon decided upon the Gran Fondo Dolci Terre in Novi Ligure a 130km ride about 2 hours drive from where we would be staying- described as an area of ‘rolling countryside’ north from Genoa. These same roads are used just a couple of weeks earlier as La Primavera winds its way from Milan to San Remo. I also knew that the top end riders at most Gran Fondos are either young herberts on their way up towards the pro ranks OR gnarly old pros on their way down but refusing to go quietly – so I was intent on just turning up and doing my own thing quietly with no real pressure or expectation from me…. how wrong I was again.

Anyway, the selection was made, the green light was given by the Misses and off I drove early Sunday morning with bike and my Italian Father in law packed into the car. My vision of a leisurely ride with spring in the air was getting slightly soggy as the rain started tipping down as we sped along the Autostrada, but I convinced myself it would still be a nice easy ride just a bit wetter than normal. As we hit the outskirts of the start town my pre-conceived ideas started to disintergrate as fast as Alesandra Ballan climbs short hills in Belgium – I hit a line of cars (no exaggeration 50 strong, everyone covered with rows of quality bikes and covered in the colours of cycling teams from every town you’ve heard of in northern italy and many you haven’t) speeding along with Police waving them through every junction – if I hadn’t known better I could easily have gatecrashed a Giro convoy. Although still 2 hours early the place was rammed, so finding the start was just a question of keeping my car in line and following the bikes. 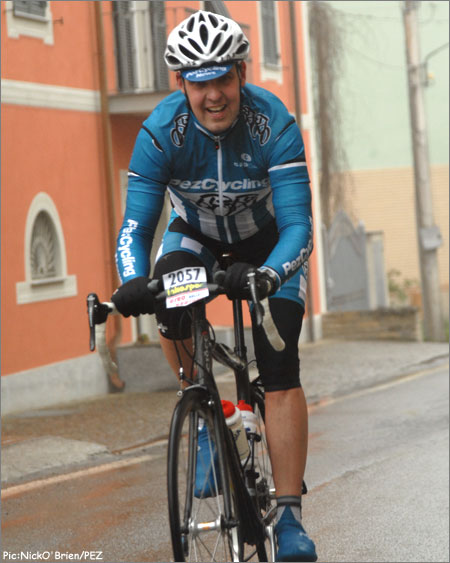 Gran Fondo Tip No.2 – Don’t worry about finding the start or using a map – just get anywhere within a 10mile radius of the town (Citta) and you will be swamped by a wave of bike mad italians all heading in the same direction.

The roads in the town centre were already barriered up and closed so we parked up with literally thousands of others and made our way to the signing on. In true Italian style it was chaos on a large scale but I managed to get my number, timing chip, Pasta Party invite and, for some reason, I’m still not sure why, a bottle of white wine – perhaps someone knew a bit of Dutch courage was going to be needed.

Back to the car, got my bike set up and whilst changing realised that the start area was already filling up – yet again in true Italian style no one seemed to bother with lining up in number sequence as the gaps in the barriers indicated – this was first come first serve and despite the best efforts of the many officials to control things people were piling over wherever they could and we still had 40 minutes to go. So much for a relaxed Sunday ride – hell, I’d paid my 25 euro entry so I joined the rabble – and despite being number 2057 managed to slot myself in the 400-500 gap from a peloton that was nearly 3000 riders!

The view behind was a mass of helmets as far as you could see and as the announcer rolled us off you could physically feel the need of them ALL to get to the front. It was lethal, the combination of rain, mad italians and traffic islands made for the most terrifying start I’ve ever witnessed and it didn’t get any better as we swung out of town into the countryside the pace was mental as a long snake of riders stretched out for seemingly ever – I couldn’t even see the front lead car. I soon realised this was not going to be the sedate ride I’d expected and made the kind of cocky decision to have a real go, that you make in the neutralized zone. Seriously though, this was essentially a race – make no mistake, and although everyone is individually timed, the urge to beat as many people as possible I found overwhelming – as I sat behind a Paolo Bettini lookalike flying down the gutter on the 12 sprocket. 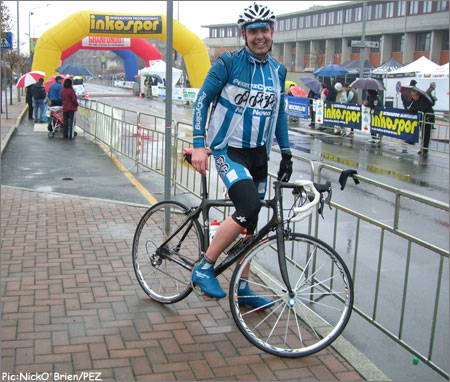 The line was already splitting as we hit the first climb after 20 km and the hurried change down onto the small ring indicated the steepness combining to send some of the early leaders backwards. The hill was around 4km long and I managed to hold my position OK up it, but descending, was another challenge, As the rain increased I struggled to hold the wheel in front (what’s wrong with staying home & decorating) but got to the bottom without losing too much. Passing through small villages the roads essentially closed, with (even in the rain) good support from the locals, things began to settle a bit and although blinded by spray off the wheels in front I was beginning to enjoy myself.

I managed to just about hang on over the few next climbs, the saving grace being that with this many riders around, you seem to be able to find a wheel to sit on even when you’re struggling. I avoided a rider in front who hit the deck on a greasy corner by going all Paris Roubaix on the grass edge, I managed to stay upright as we flew through an unlit tunnel at 50km an hour and still I was enjoying it, more climbs of around 3km – just enough to get a rhythm however slow, and soon I was facing the final climb at Sant’ Agata Fossili, in a group of around 50 riders.

Common sense said I should take it easy so obviously I ignored that and worked my way to the front at the foot of the climb and actually attempted an attack – what a pratt – ideas way above my station, ability, age etc. I began to grind to a near crawl on a hairpin as even the largest arsed riders began to come past me. After over 100km I’d reached my limit at this speed and bonked spectacularly like only an Englishman can, in front of thousands of Italians.

Zig zagging across the road I stuffed energy bars in my mouth which was pretty stupid because it prevented me breathing – but some how I got to the top and began the return to Novi Ligure. I was soon caught by a small group containing a few smug faces that I’d passed earlier and managed to hang on the back of them for the home leg. The pace coming back into town was a fraction of how we’d left in the morning and much safer but as I crossed the line (351st 49 minutes behind the winner) I knew that although it hurt big time and was a massive event compared with what I’d expected I was definately coming back for more Gran Fondo.

Gran Fondo Tip No.4 – If you must sprint for 350th position make sure there is no one around to watch.

Gran Fondo Tip No.5 – Keep smiling whatever the weather….. 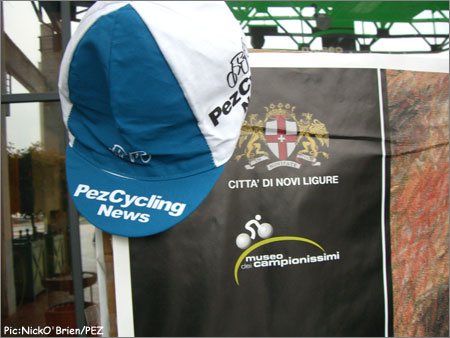 Cycling runs deep with the people of Novi Ligure with statues dedicated to past champions lining the main street. 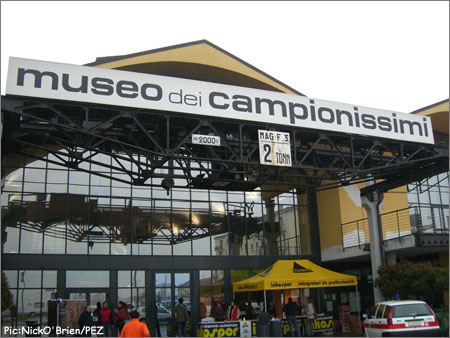 Apparently the Coppi Brothers lived & trained around Novi Ligure and the museum dedicated to Fausto was the perfect distraction for my Italian father in law during his long wait for my return.

Liege Look: The Hills Of The Ardennes