Top Ride: I’m still basking in the afterglow of the 2016 RBC Gran Fondo Whistler – a big goal accomplished in better form than I’d expected. And after weeks of prep, and all the logistics of coordinating the family for the weekend, and over 5 hours on my bike, it all went by a little too fast.

Like many of the 3,800+ riders who cycled the 122km from Vancouver to Whistler at the RBC Gran Fondo Whistler on Saturday Sept 10th, I’m looking back at the ride with an overwhelming sense of satisfaction. After committing to the ride about 2 months ago, and then getting serious about my training – my entire focus has been getting to – and through this awesome ride on the most scenic Sea To Sky Highway. I didn’t really expect to be wishing it could have lasted longer than the 4 hours and 21 minutes of riding time I posted. 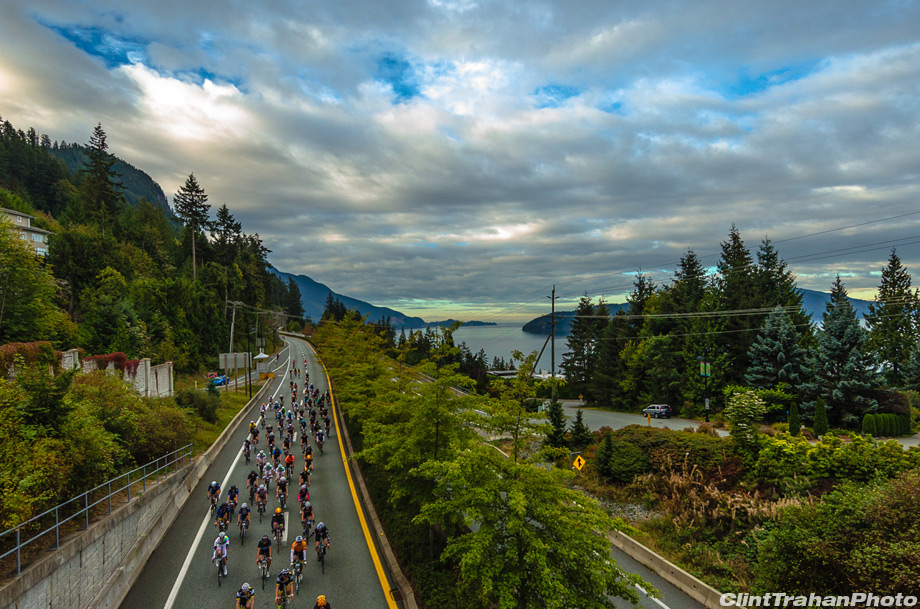 A few clouds at the start made the ride past Howe Sound even more scenic.

To set the stage – I’ve ridden the RBC Gran Fondo Whistler twice before – the first two years in 2010 (read it here) and 2011 (read it here), but then my growing girls crowded my training time (sure – why not blame them?). I remembered how good I’d felt in 2010 after a great season of big rides and really good fitness, and also how I felt not so good in 2011 after going too fast in the first half of the ride and then dragging it out to the end.  This time around I wasn’t going for a personal best time – but instead looked forward to enjoying the ride and the day – and the added bonus that Mrs. Pez and our two girls would be there waiting for me at the finish.

I like to be organized for these big rides, and spent the better part of Thursday & Friday prepping my bike, helping get my family out the door to Whistler Friday afternoon, picking up my event package, then getting clothes & bottles ready for the ride.  All that was left was to set the alarm for 4:45 AM and get some sleep.

This is about as sharp a focus as my eyes would muster as the sun rose before the start.

But my own organization pales in comparison to what Gran Fondo Canada pulls off for this and its other events.  Not least of which is a fully closed course from Vancouver to Whistler – how they get the councils of five different municipalities to agree to participate is mind boggling. Add in assembling manned support stations that don’t close until the last rider passes (this year some folks were out there for over 9 hours), return transportation for hundreds of riders and bikes, and one announcer who talked for the better part of 12 hours. But they do.

Once I’d registered, a well timed stream of emails kept me informed on the fast approaching event and all the details I’d need for race package pickup and the ride.  In fact, at no time during the entire weekend did I need to ask for help or directions – everything from start to finish was so well marked, signed, and organized, that I never had to think about anything but enjoying myself. 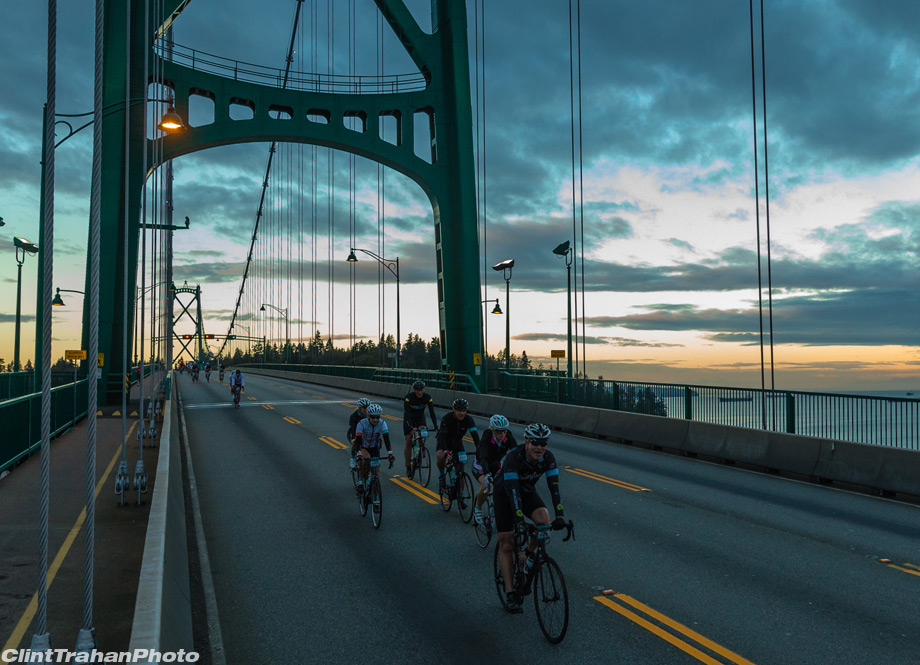 Riding across an empty Lions Gate Bridge happens only once a year – on this ride.

Rolling to the start at on Saturday morning at 6:00 AM, it was pretty cool to see the route under full police lockdown.

Riding across the Lions gate bride we joined a steady stream of riders doing the same, and saw the Forte group already rolling north on their way to climb the 900m Cypress Mountain as an extra tough add-on before their ride to Whistler. With this major bridge fully closed to traffic and taken over by cyclists is something only done once a year for this ride. 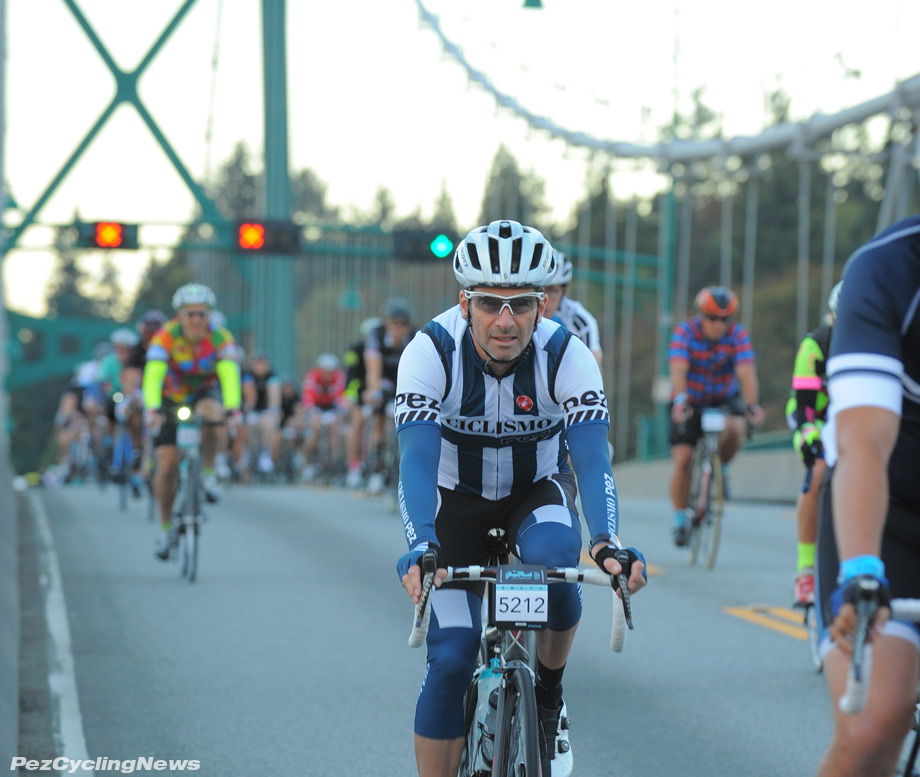 And that’s another one of the many “best things” about this gran fondo – the closed roads all the way to Whistler. We had two of the three lanes on the Lions Gate bridge all to ourselves – and a full two lanes of the Upper Levels Trans-Canada highway all for us all the way to Horseshoe Bay. Just amazing.

Arriving at the start we were greeted by an army of volunteers (the event attracts some 700 volunteers in total).  Since my last ride 4 years ago, the ride start had been moved from downtown Vancouver to Stanley park – a good call that really chilled out the always nervous opening kms. There was more room too in the staging area, reducing everyone’s stress and making for a safer ride. But one tradition stayed – and that was U2’s “Beautiful Day” blasting through the PA system as we took the start just after 7:00AM. 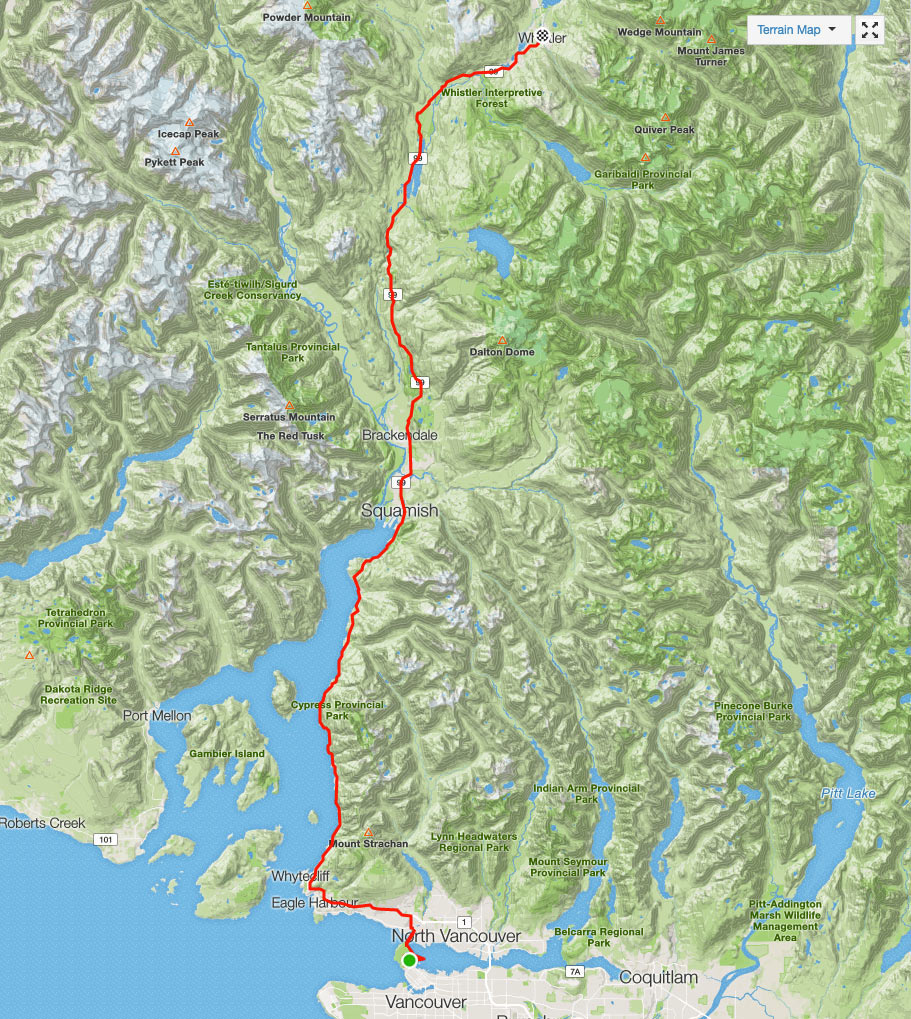 The Ride
Getting in with a good group is key to making a good time over the 60km to the halfway point in Squamish. The terrain rolls up and down – with a couple of significant climbs, about a fast group will get you through so much faster that flailing away on your own.

So after settling in and picking up some speed on the Upper Levels, I hooked up with a couple other good riders, and soon enough we morphed into a pretty big pack rolling at a good speed.

Things were going great until I dropped my chain and lost the group.  But another thing I love about these gran fondos – is that with so many riders – there’s always another group coming along. And sure enough I found a couple more guys, and then we were joined by a bunch more – all within a couple of kms. Game back on.

Here’s the course profile – (minus the the first 10km at the front – that’s my ride to the start.)

Riding north along Howe Sound shows off some stunning views of the rugged Coast mountains tumbling down into the sea, it also a has a couple of leg-stinging climbs – like the timed KOM stretch just past Furry Creek. The climb is a dead straight km and seeing a string of a few hundred riders ahead is another part of this ride that you just don’t get anywhere else.

By halfway I’d joined up with a new group and we flew through the sea-level flats at Squamish at the halfway mark.  It was a two up paceline of several hundred riders with fans cheering us on for several kms, but the high speed and a line of spectators within arms reach meant it was all eyes forward to avoid a touch of wheels, or worse.

As the road gently climbs out of Squamish past the Brackendale, even the 3% grade slows everything down and the first signs of fatigue set in. That rest stop just up ahead called my name and I took a little more time to walk around, eat some orange slices, bananas, a waffle and other goodies from the well stocked tables. 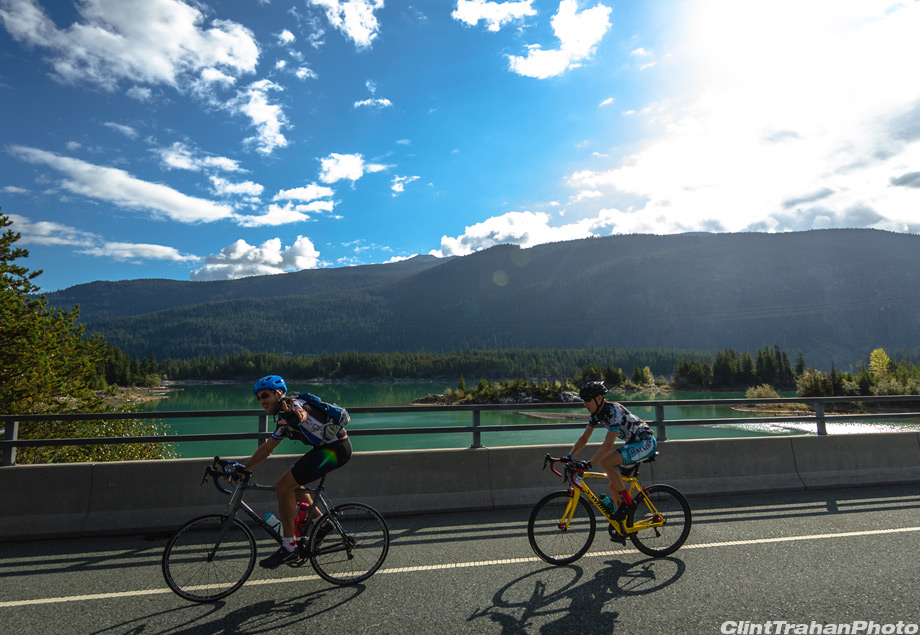 The ride from here gets tough with lots more climbing, and the fatigue sets in as the kms tick by.

Somewhere in here I hooked up with a small group of three other riders, one was wearing a very rare (in these parts) Garda Bike Hotel kit. Having stayed at the Italian bike hotel on Lake Garda a few times – I had to say hello – and it was a good thing as Calla Barras still had good legs from riding the Maratona Dolomiti with the GBH crew, and she wasn’t shy about going to the front to keep us rolling at a respectable pace.

And that’s another great thing about a ride like this – with everyone suffering together, it’s pretty easy to make new friends on the road, sharing the work and a common goal of making it to the finish. 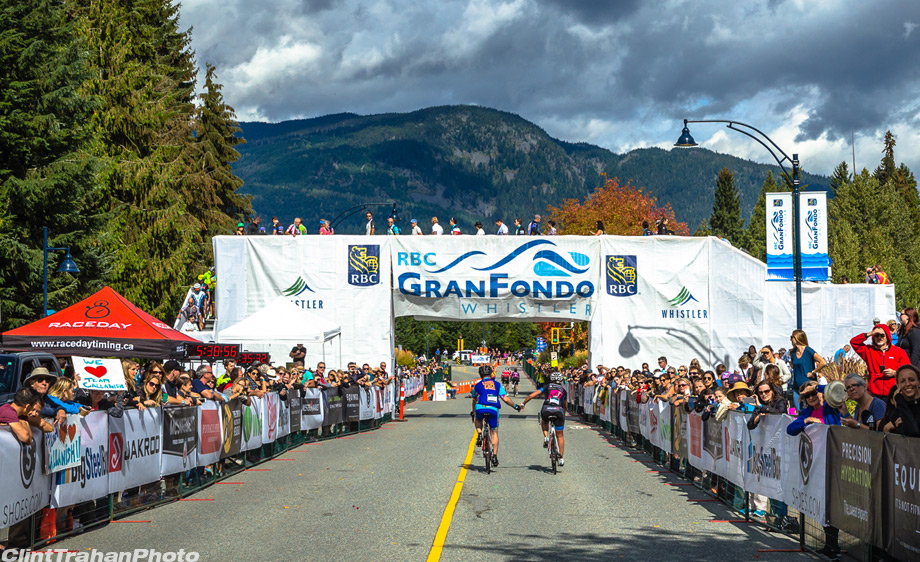 The Finish Line – Or the start of next year’s training?
Participating and completing the ride for my third time, I can’t help but compare it to my first two, especially since this year I was there to enjoy the ride.

This year, what stood out for me was a greater sense of accomplishment.  Given my current form and fitness (ie: not as good as my previous two rides), I surprised myself and felt much better on the second half of the ride than expected. I’d burned a few more matches in the first half of the ride than I wanted to, but still had one left to attack a couple of big guys up from Seattle in the last couple of kms (we had a good laugh when I couldn’t drop them).  Not having ridden this distance at all this year, I was pretty pleased with my time of 4:21.

But the best part was seeing my family cheer me on at the end – Mrs. Pez and our two girls were easy to spot all dressed up in their PEZ kit. My littlest had never see me in a “bike race” before and the first words out of her mouth were “you don’t smell sweaty at all!” Then the big one asked if I was crying. (Maybe I was a bit choked up from the emotion of seeing them there.) Mrs Pez gave me a winner’s kiss and I promised I’d find them soon as I pedalled off to cross the line. The pain and struggle of the previous 4 and a half hours all disappeared. 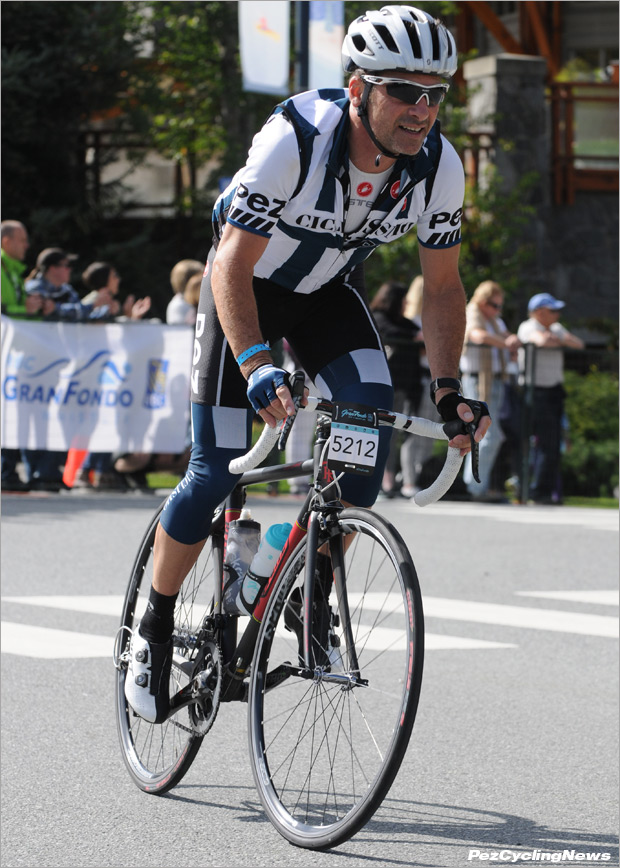 Driving home from Whistler the next day (after a fine dinner with friends and a trip up the mountain with the girls) – I was beset with the same sense of melancholy I’ve had on every trip home from Whistler since I started going there in high school. The return has always signalled the end of an amazing weekend and a reluctant return to reality.

The sun was shining in a cloudless blue sky, it’s rays sparkling off the waters of Howe Sound, and I wondered how something that lasted over fours hours, and took weeks of preparation and build up, could pass so quickly, and be so hard to remember clearly.

• Get more info at GranFondoWhistler.com 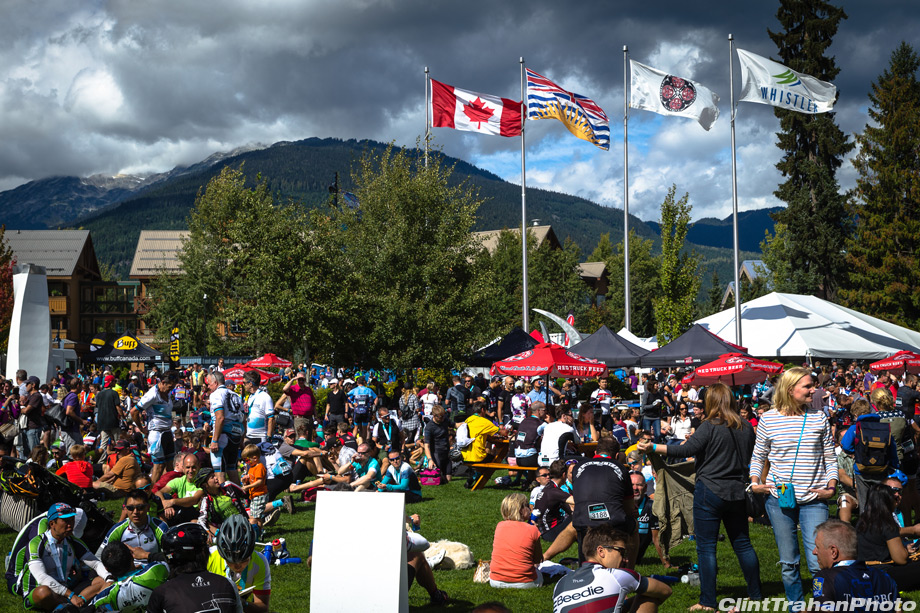