The 2015 Giro d’Italia starts in Liguria – one of my favorite regions of la bell’Italia. I’ve spent some quality time here and can attest the area is filled with excellent rides along the coast and into the mountains that define it. This ride from Levanto to Sestri Levante is a classic.

Stages 1 – 4 of the 2015 Giro run from Genoa to la Spezia and make full use of the coastal terrain of uneven climbs, small twisting roads, and spectacular scenics. This also means riders will need to be focused on the job at hand, (so don’t expect any sleepy sprinters’ stages here) but the roads can be dangerous too… Wouter Weylandts was killed in a crash descending the Passo del Bocco in the 2010 Giro. 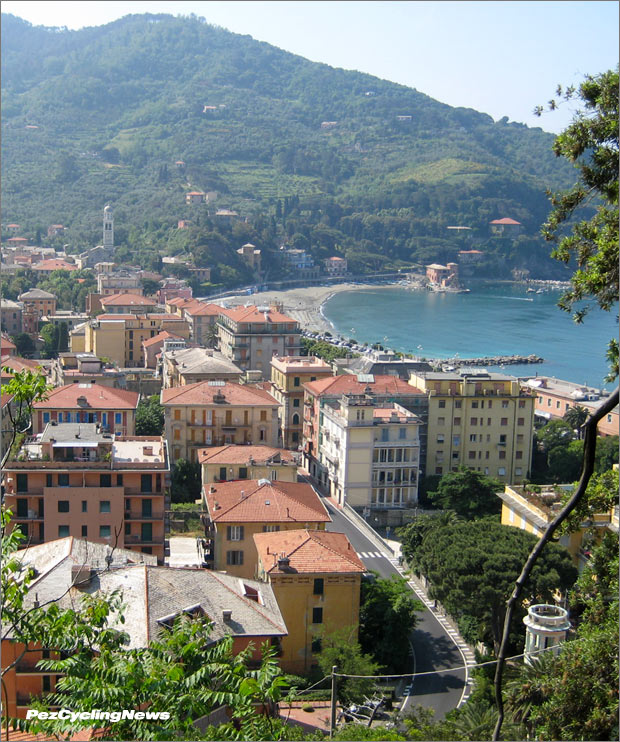 I’ve ridden in the area several times – including 2009 when the Giro ran an individual time trial from Sestri Levante to Rio Maggiorre in the famed Cinque terre area to the east. That day was steaming hot, and the coastal humidity made it even more so. I did this ride the day before the TT – and would gladly do it again. We’ll present a closer look at the 2015 Giro route tomorrow, but let’s look ahead with this fond look back…

—————–
2009 Giro, Roadside St. 11: My efforts to get ahead of the race paid off today with a Top Ride in the hills around Sestri Levante, which was exactly what I’d planned – sort of…

In terms of my own roadside reporting, yesterday was my ‘queen stage’, and my report only made it to PEZ via round-about emailing of various parts to Jered for posting. I did find a cafe with wifi (free even), but as today is Wednesday… you guessed it – it’s ‘chiuso’.

I finally logged 7 hours of sleep last night – which is a big deal when shifting 9 hours from home, thanks in no small part to my new best pal in Levanto – Marco – whose bar started my evening ritual with a well-deserved negroni (aren’t they all?), and then finished it up after dinner with the tallest glass of limoncello I’ve had, which lasted about an hour as he postponed his closing just for me… The local guardia even stuck his head in to see if everything was okay. This being a small town, everyone knows everyone, and folks note the slightest irregularity… Which in this case was one excited Italian (Marco), and one semi-corked guy butchering the Italian language (ahem, that would be me), solving the world’s problems. 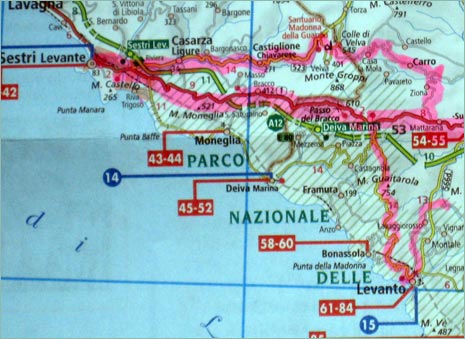 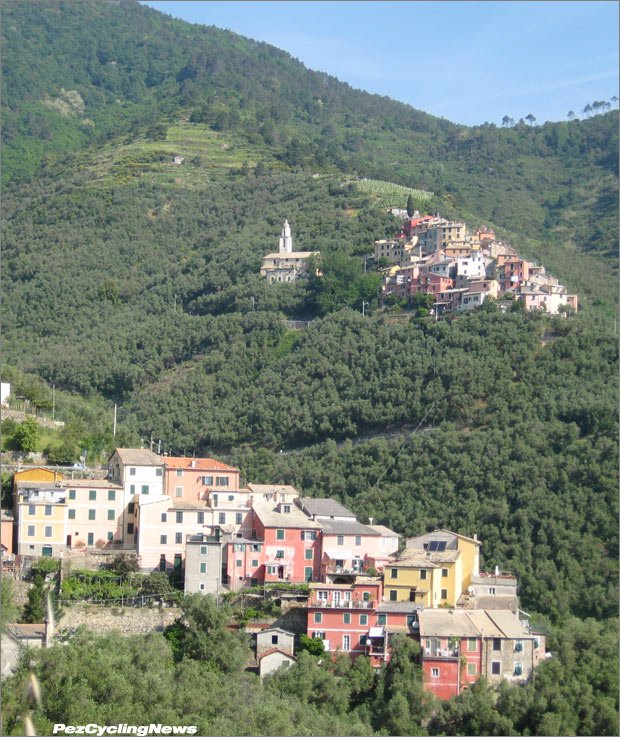 9:30 AM – I rolled out of Levanto before the sun was too high, and straight onto the TT corsa, heading back to the start town in Sestri Levante. My spirits were high and things were running uncharacteristically smoothly, until about 30 minutes and 500 meters of elevation gain later when I realized I was in fact completely off course. (Note: I’m resigned to no longer being surprised by these occurrences.) 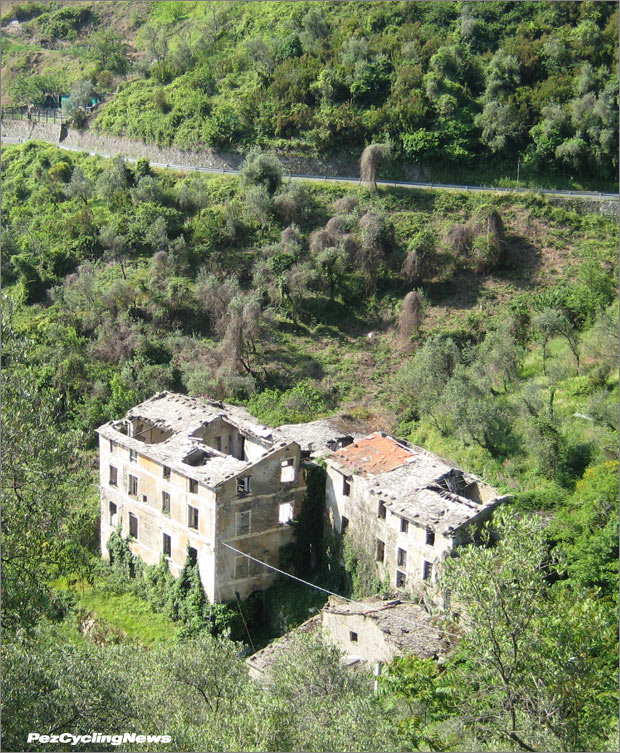 I’m willing to wager you don’t see stuff like this on your own local ride.

10:45 AM – Back on course – gee whiz, look at all those course makers. Funny how I missed those on that other climb. By now the sun is warm, even hot in places, and the sweat starts pretty much streaming off my head. My VDO computer reports the temp at 23C… it sure doesn’t feel like that under my helmet. 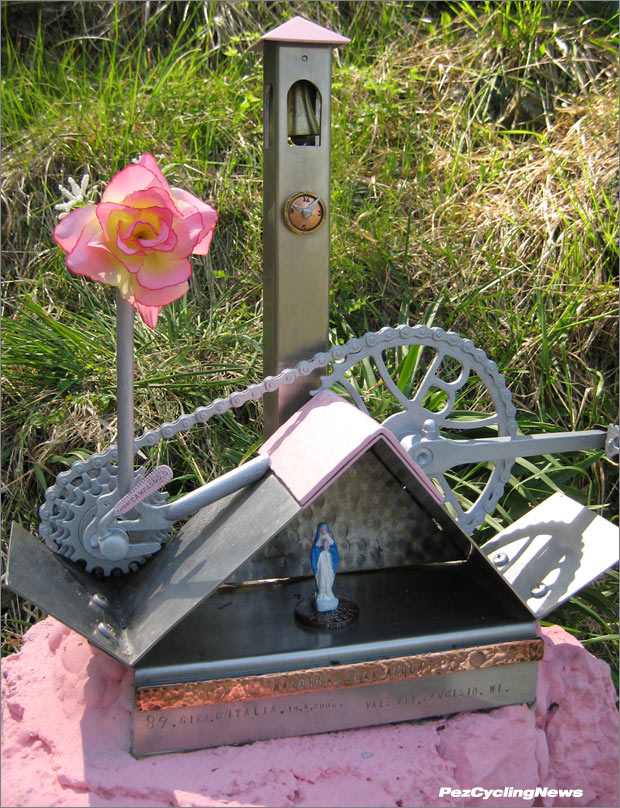 I’m willing to wager even more you don’t see stuff like this on your own local ride.

I was headed 16km up to the Passo del Bracco (8km of climb, 8km along the top), before taking a deviation to source out a descent I’d done here 15 years ago when chasing the 1994 Giro. (There’s something about remembering what you did 15 years ago that really marks the passing of time, don’t you think?) 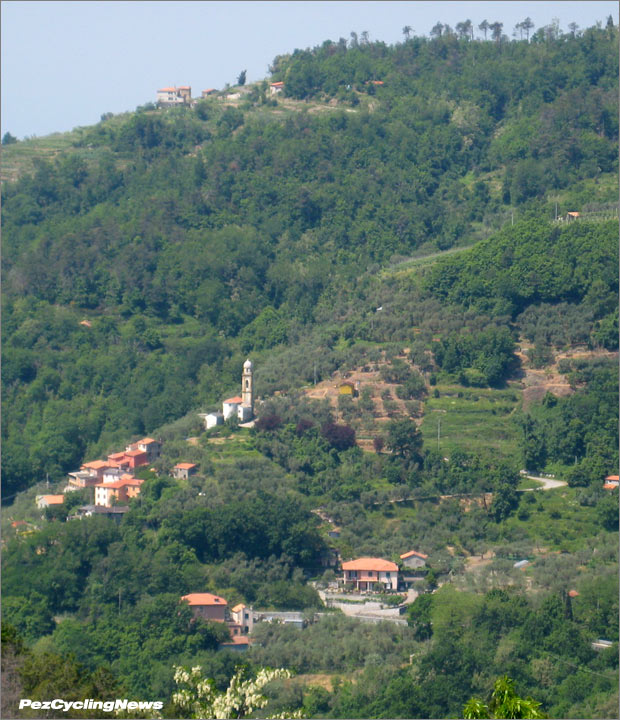 The town of Velva – pretty much just another photo-worthy spot on this ride.

Aside from the fact that I’d already logged 5km of climbing in the legs, and this being Italy and the Giro and all (= everything takes at least an hour longer than expected), I was feeling great. The views to the sea were ever more stunning with each meter gained – and they ticked off pretty fast. 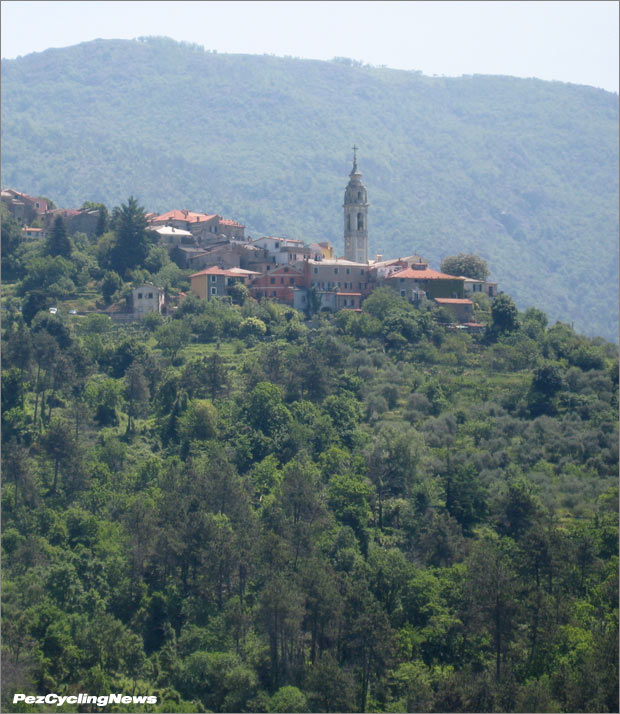 11:30AM – Passo del Bracco summit reached. Spirits good. Decision time, and I turn right to uncharted tiny back roads, with only my trusty, sweat dampened maps and overly confident sense of direction to guide me. A very tasty 4km descent brings me to another fork in the road, and for some reason not quite clear to me, I make a correct directional choice which results in slicing 17km off my planned route – which I happily take. 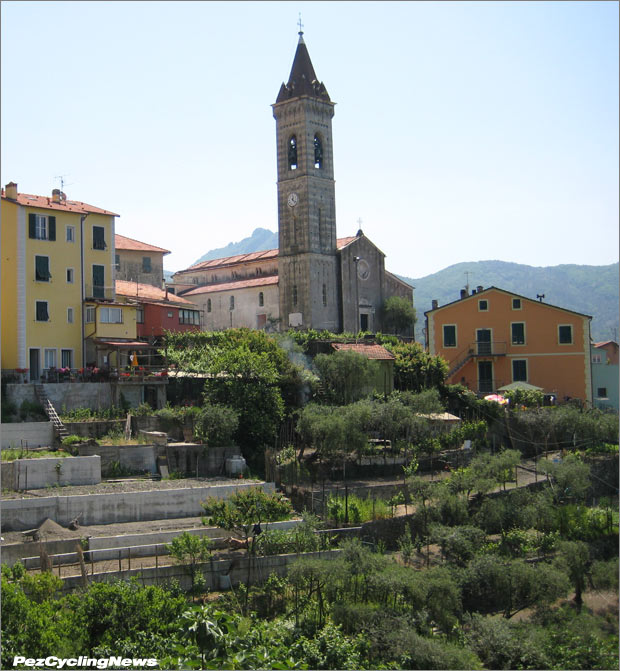 The Santuario di Madonna di Guardia again, this time coming down the other side of the valley – I think.

Another fine descent over twisting but bumpy roads leads me into a valley enroute to the town of Carro – okay it’s a village, only smaller. The complete lack of cars and poor quality of the roads heightens my sense of isolation, and I think about my wife and daughter back home. I cross a small bridge at the valley bottom and begin the climb up to Carro with a determined pedal stroke, noting the sun’s doing a fine job of baking this valley. The climb is wooded, but there’s no shade on the road, and the heat, and humid sea air mixes with the local foliage to produce a toxic inhaler. I pedal upwards, and inhale. 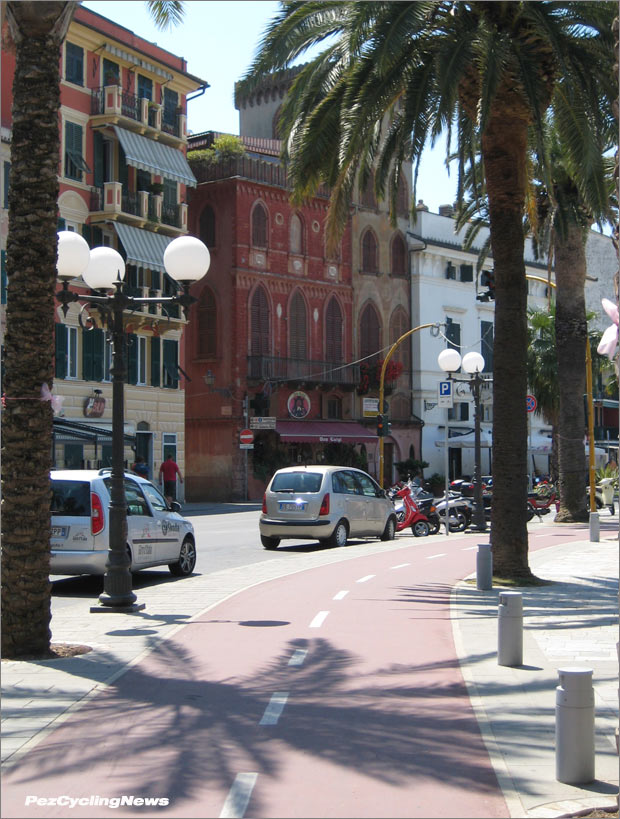 The climb winds up past Carro, it’s another 4km to the Colle de Mola. The sun is hot, that gel I had isn’t sitting quite right, and even though the section is not steep, it is a grind. At least there’s some shade. 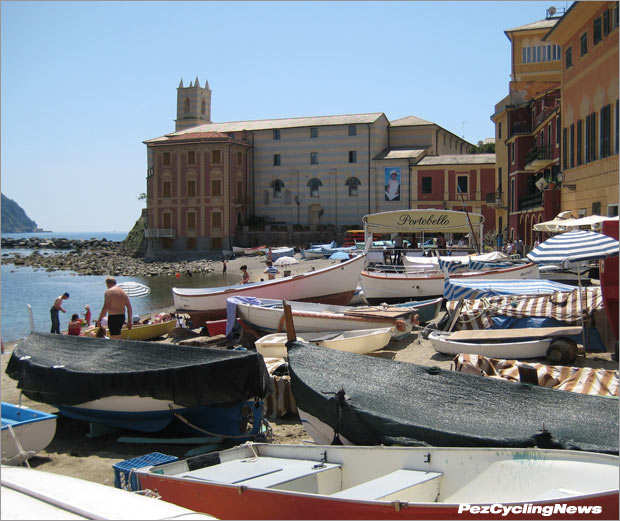 Sestri Levante sits on a tiny peninsula and is a great town to visit.

By now I’ve switched out my helmet for the Pez Cap, which in addition to handily shading my eyes, serves as a nifty sweatband – only problem is I’m sweating so much that every few seconds – with metronomic precision, a bead of sweat rolls along the edge of the visor, dangles for a split second just between my line of vision, then lets go and drips just past my nose… I’m sure landing squarely on my top tube. 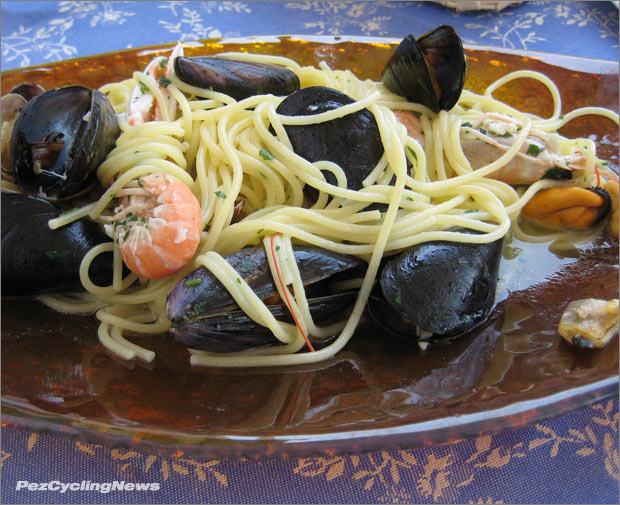 Spaghetti con fruit di mare… now this is ‘ride-food’ I could get used to.

12:15ish: La Mola summit reached – 15 year old descent in view – Sestri is just a fast & fine plunge to the sea away. I stop to massage a hot spot out of my left foot, then push off with renewed vigor and thoughts of a seaside lunch.

12:45ish: The top of the descent does not disappoint – the twists and turns are surpassed only by the views, which are worthy of few full stop photo opps. It’s 8ish kms of pure heaven. I drop from 350 meters to 45m, and expect the seaside to appear any second.

It does not. Nor does it appear for many many more seconds, and minutes, and 10 more kms of riding. I stay the course, until I arrive to the toll gate to rejoin the autostrada… saved only by my quick thinking… but mostly by a local rider who points me in the right direction. 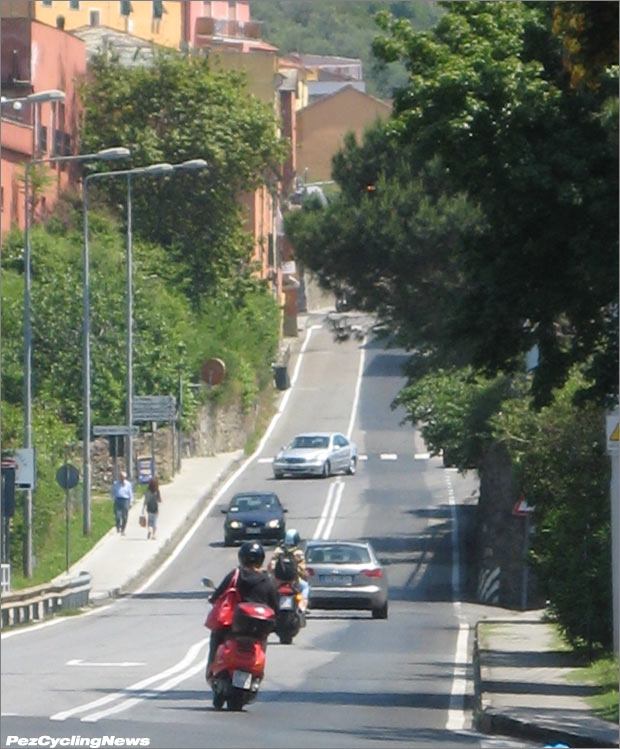 1km out of Sestri, the climbing rear’s its head.

A few kms later I pop out from between a couple of buildings and there it is – the coast! I’m in Sestri Levante and not a moment too soon. It’s 3.5 hours since I left the hotel, (that’s about 90 mins longer than my usual rides), and I consider the fantasy of hiring a car to just drive the 34kms back to Levanto… but not after a well deserved lunch.

The town is quiet, and I choose a trattoria where a lady is hanging pink balloons for tomorrow’s stage. This looks like a good place. The temp has reached the high 20’s, and the cold beer and water do a handy job of cooling me off – one bottle placed on the back of my neck, the other held against my forehead. They taste pretty good too. 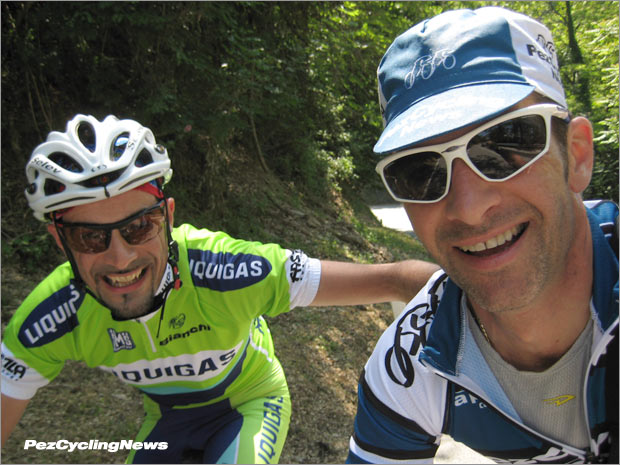 Andrea – my new best bud, and unwitting domestique who got me up the 15kms to Passo del Bracco. I thank you for the company, and shared suffering.

2:00PM: I clip in and push off for what I expect will be a hot slog along the first half of the TT corsa back to Levanto. There’s no point pushing the pace, it’ll push back soon enough, and after a flat 1000m through town, the road shimmers as it rears straight up…

My favorite line from that movie “The Matador” with Pierce Brosnan and Greg Kinnear pops into my head: “Let’s kill this f*cker and get the hell outta here.” Wishful thinking in retrospect. 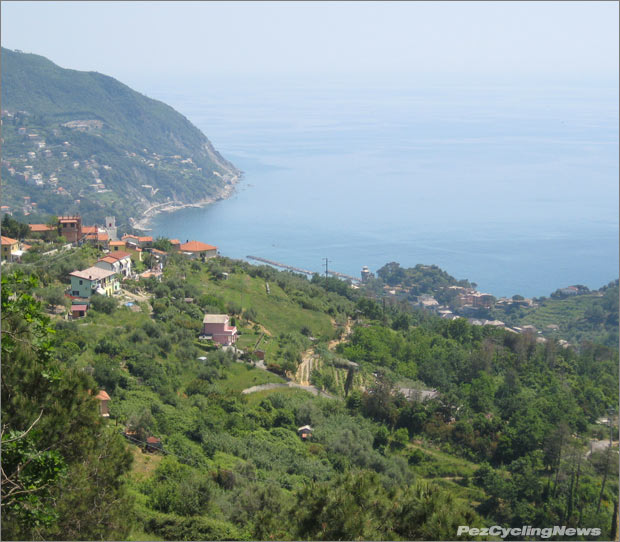 The corsa bobs and weaves it’s way along the coast. The views are a worthy reward for the effort.

2:10: 50meters up the climb, I pull over to replace helmet with cap… I can only offer as defence for this decision the baking heat – which is now 28C degrees. I’m passed by two other riders, I think they might make good companions and I could use the help after my so far solo adventure, but the helmetless bald guy on the front is hammering, and thankfully the Liquigas-clad guy behind soon drops back and is happy to go ‘piano, piano’.

I’m ready for an hour of suffering in the heat. The grades are never that steep – the bottom half is 7-8% average, the top seems closer to 5%. Sadly, none of this matters, as I’m in bottom gear and plodding along at what can only be described as a ‘survival’ pace. There’s no point trying to go faster… it’s impossible anyway. Once again I’m thankful for my Italian companion Andrea who suffers with me – silently now. When one of us changes down a gear, the other immediately joins- no questions, and no bs. 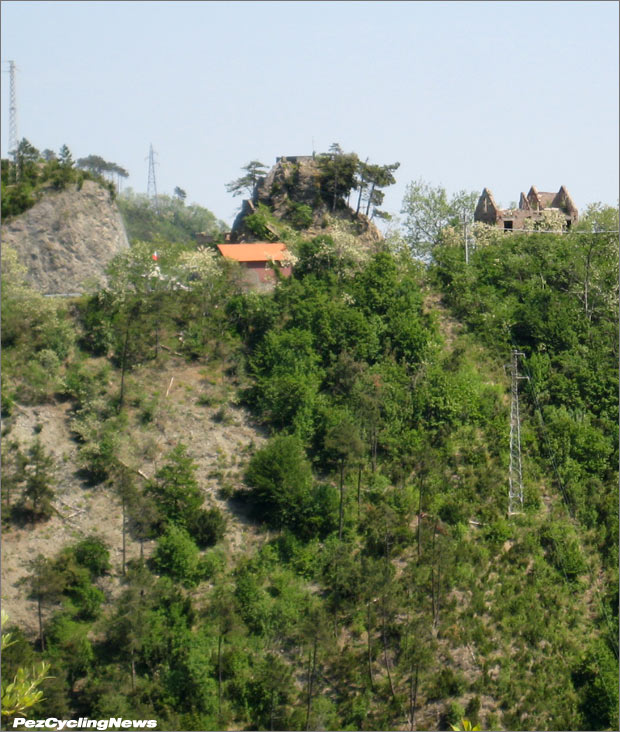 The ruined building mark the summit… rather fittingly.

2:30: Higher up the climb, the first tifosi are making camp – those micro-sized Euro-camper vans popping up more frequently the higher we go.

3:00: One hour exactly when we crest the summit to the climb, and note the largest collection yet of campers, crammed into the tiniest pullouts you can imagine. Soon after, Andrea bids me arrivaderci as he turns around. We’ve gained 600 meters, and I’ve got another 6-7km along the summit, which on paper sounds easy, but is anything but. 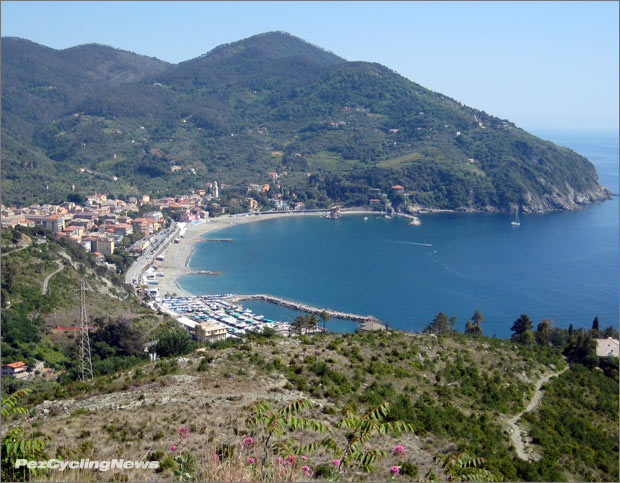 3:25ish: I pull up to the intersection I last saw 4 hours ago – when I turned right. I turn right again, but this time headed for the descent proper and soon enough 8km more of descending back home. 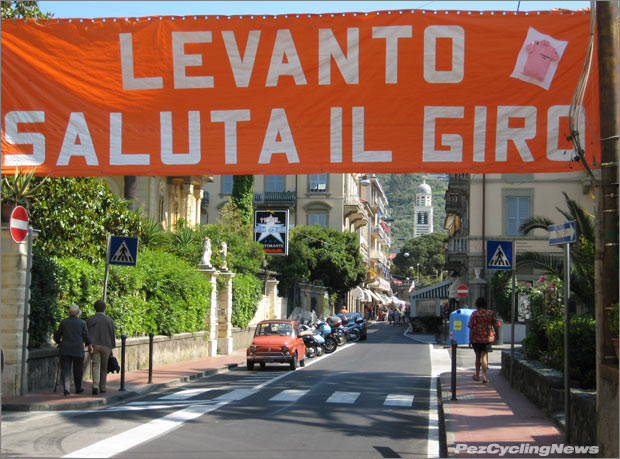 3:45: The ride down is a great one – and although I’m baked (quite literally) as I finally pull back into Levanto and under the giant banner welcoming the race, some 6 hours after I started, it’s even clearer to me how tough the TT will be, and how my respect for the racers is again underlined.

Now where’s my shower… I’ll think about a negroni later. 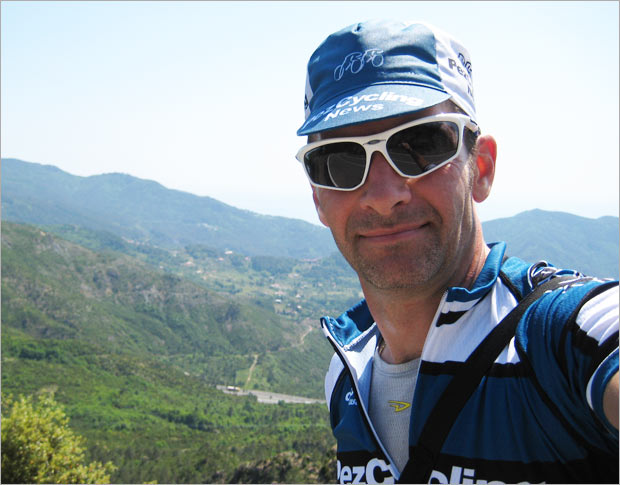 Ciao and thanks for reading –
Pez