Spain’s “Costa Blanca,” a name to strike fear in the heart of the most experienced traveller. There’s cheap alcohol, bargain English fried breakfasts and the ‘Loch Ness disco pub’ – if “Nessie” finds out that her image is being used without her permission, there’ll be trouble – and God knows how many ‘English’ and ‘Irish’ bars.

But it’s not all gloom and doom for the cyclist trying to avoid the temptations of the flesh and find early form. Flights into Alicante airport (around one hour’s drive from Benidorm) are cheap and plentiful from all over Europe. And there are tens of thousands of hotel and apartment rooms going begging during the winter where full board can be had for as little as 15 euros per night, from hotels desperate to cover their costs until the customers with the tattoos, sunburn, and soccer strips flood back in the spring. 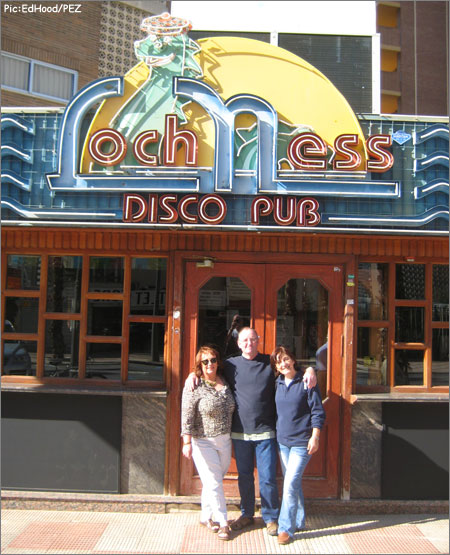 PEZ man, Al Hamilton has lived in the province of Valencia for nine years – he knows these things! Valencia has its own language, a dialect of Catalan, although a lot of locals say it isn’t (it’s Valenciano!) – but like Al says; “there’s no such country as Spain!” I know what he means, if you traverse the north of Spain from the French border in the east, to the Portuguese border in the west, you’ll hear Basque, Asturian and Galician spoken – and maybe not much ‘Castellano,’ as the locals term what we know as ‘Spanish.’

Flights and digs duly organised, ten kilometres of pedalling away from the Costa through the coastal traffic takes you into a different world. Al’s home village of Polop is the gateway to hills and mountains which make the area such an attractive training proposition – provided you can climb!

See that first blade on the saw? That’s the Coll de Rates.

The Coll de Rates (neck of the rat) climb starts innocuously enough in Callosa, but soon states it’s intentions as it zig-zags up the valley between the rugged Sierras. The village of Tarbena lies at the false summit – there’s a descent after what looks like the top, then another stiff couple of kilometres to the actual top. The climb will reward the ‘grimpeur’ – Al has done it in just over 50 minutes – with stunning views down across the ancient terraced valleys to the coast, where Benidorm’s incongruous high rise towers mark the site of the 21st century’s answers to Gomorrah. 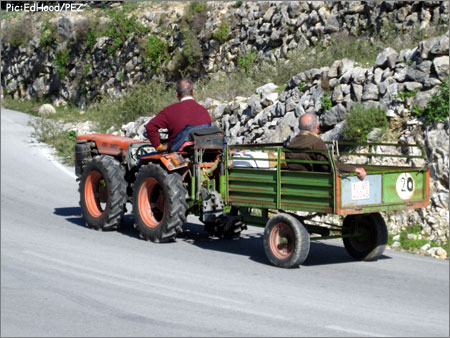 The Med sparkles in the November sun, just beyond, and all is well with the world. But take a left down into the village proper and things get even better for those who like a bar to lean on as they drink their cafй con leche. 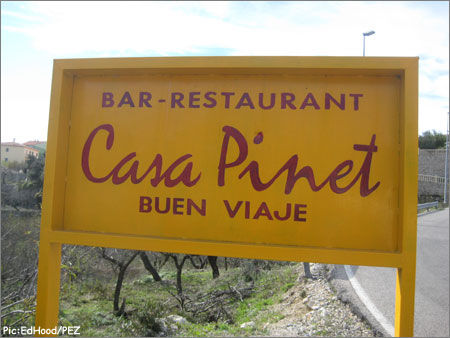 ‘Casa Pinet’ is a shrine to Spanish Republic; Spain’s socialist dream of a society where all were equals and rank and religion meant nothing. But it was General Francisco Franco’s Nationalist forces – backed by Hitler and Mussolini – who emerged victorious from the bitter Civil War which split Spain down the middle between 1936 and 1939. 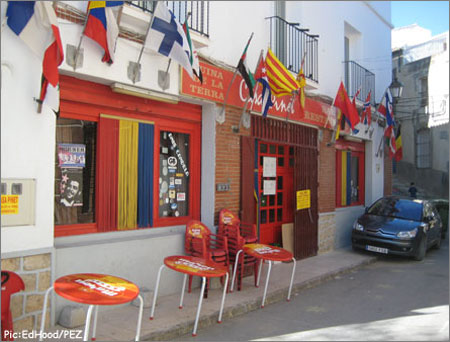 It was nearly 40 years before democracy returned to Spain; but the horror didn’t end in 1939 with the cessation of hostilities – Franco systematically exiled or eliminated his rivals and those who didn’t share his right wing dream for Spain. 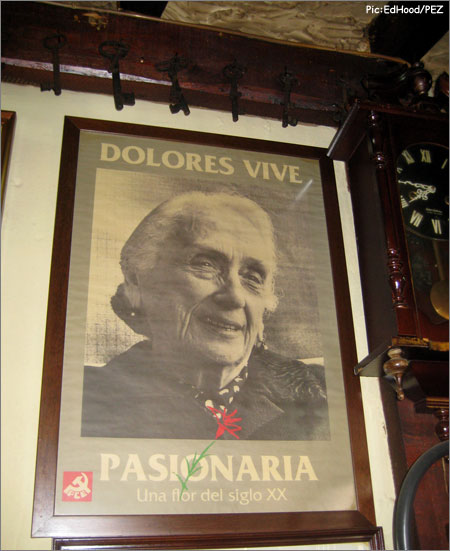 Casa Pinet is a shrine to the Republic, its heroes and to the world wide Socialist and Communist movements and their icons. Dolores Ibarruri’s’s picture hangs here, ‘The Pasionaria,’ (passion flower) whose Civil War broadcasts on Republican radio stirred men to feats of bravery and sacrifice. 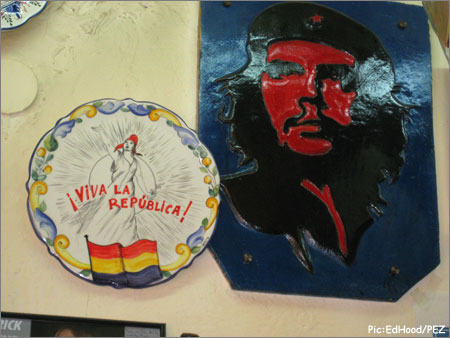 Che Guevara looks out from above the bar, beside a memorial plate displaying the colours of the Republic; purple alongside the present Spanish national red and yellow – which represent the sand and the blood of the bull ring. Fidel Castro is up on the wall with Lenin, Stalin and Hugo Chavez; but strangely, there are no pictures of George Bush or Margaret Thatcher anywhere. 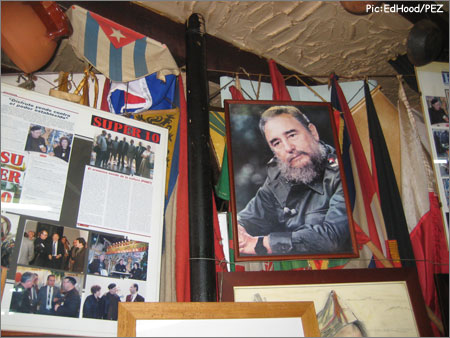 Tarbena has another gift for the weary traveller, restaurant Ca Pelut – Al’s favourite paella joint. It’s a no frills affair, white painted and plain, the hoops where the donkeys were tied up are still there – it was once a barn. In my ignorance, I thought that paella was always seafood based; but Al explained that it was in fact a country dish, utilising the rice which grows in the north of the Valencia region and anything else that was to hand; local vegetables – particularly beans – near Valencia and rabbit near Alicante. 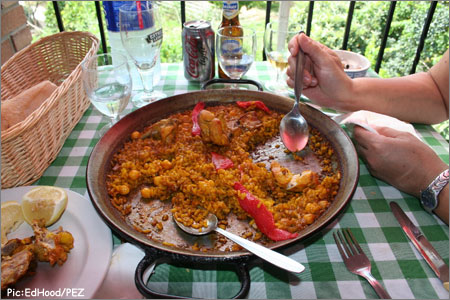 Road menders sit beside local afficinados like Al and tourists like me as ‘Mamma’ conjures huge pans of steaming, glorious, golden coloured paella (whilst pappa drinks red wine and watches TV) washed down with cheap, but very drinkable local vino – as Al says; “it does taste better, the more you drink!” The dessert was succulent nispero – but more about them later.

Drag yourself away from Tarbena and take a left towards Castell de Castells and the quietest of roads rises and falls through the hills – it reminded me of the roads that the Saunier Duval squad took in the hills above Granada, at their training camp, back in January – and yes, I did wax lyrical about Piepoli’s form!

Past Castell de Castells the countryside is greener, there are olive trees everywhere and the traffic is so light it’s a dream through Famorca and Facheca. A left past Gorga and it’s the main road back to Benidorm; with the Sierra de Aitana rearing fierce and jagged on the right. 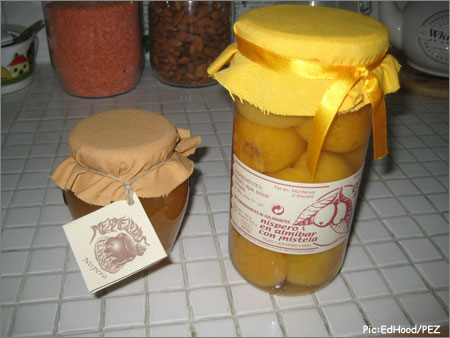 Just before Confrides, pretty much in the middle of nowhere and over the top of a long climb, is a shop which sells all things ‘nispero,’ an apricot-like fruit which must be harvested in a narrow two week window, or it rots. The fruit only grows in a few Vallencian valleys and has made some famillies very rich – it’s a sought after delicacy. We bought nispero marinated in the sweet local Mistela wine – another magical elixir which Mr. Hamilton introduced us to – and nispero marmalade. 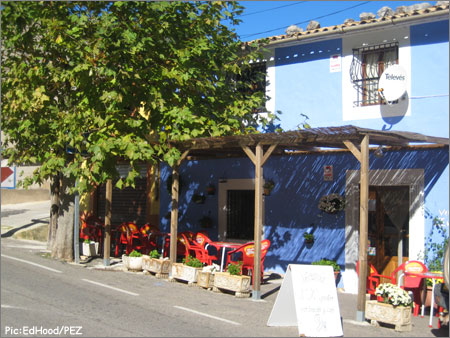 A little bar just as you come into Confrides serves a two course lunch with wine and bread for nine euros – we settled for cheese sandwiches and patatas bravas (deep fried potato chunks in a spicy sauce) washed down with cold Mahou beer. 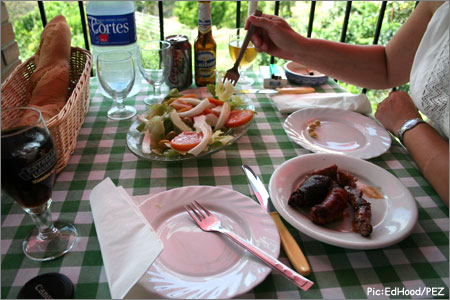 There’s a little more traffic on this road, but not enough to cause you to ride in single file. 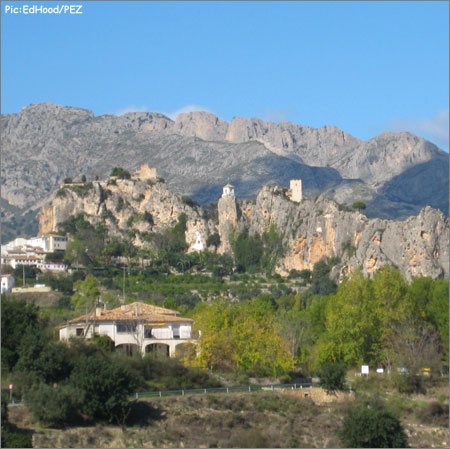 The next stop is Guadalest, where the old village and church are built into the mountain. An earthquake here, in the distant past gave the rocks a surreal spiky appearance, which the old builders used to good advantage. To enter the ancient, high village, a doored passage through the rocks has to be negotiated. 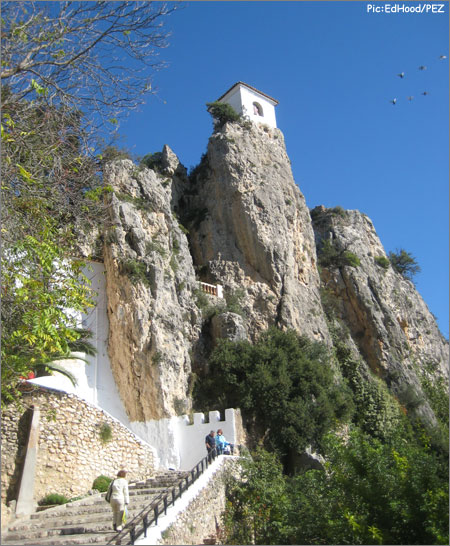 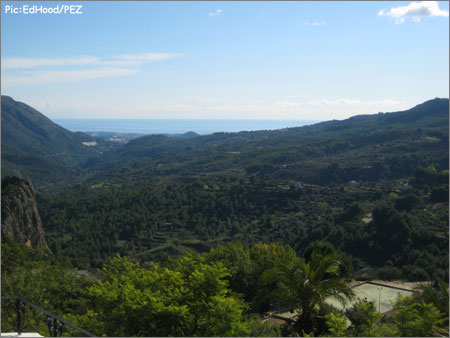 The views from here are stunning – across the reservoir to the north and all the way down the valley of the Guadalest River to the sun kissed Med to the east. The terraces here remind you of Nepal or Tibet; Al explained that these pre-date the Moors (we call them Arabs, who ruled Spain to greater or lesser degree for nearly 800 years) and Romans who both settled this area and are the work of the ancient Phoenicians. 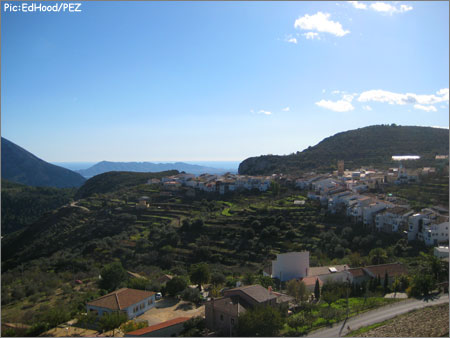 Whole hill sides, which stretch for kilometres have been painstakingly terraced, with no power tools – just human sweat.

The descent back to Polop is fast on newly surfaced, sweeping tar, where, on the mountain sides, large housing developments are frozen in a half finished state, reminding us that these are tough times. The Spanish cycling press reports that there are currently 100 Iberian pros looking for contracts.

Back on the coast, if you get the time of year right, you’ll find the likes of QuickStep holed-up for their training camp at Calpe; or Astana at Denia, both towns are not too far north of Benidorm. 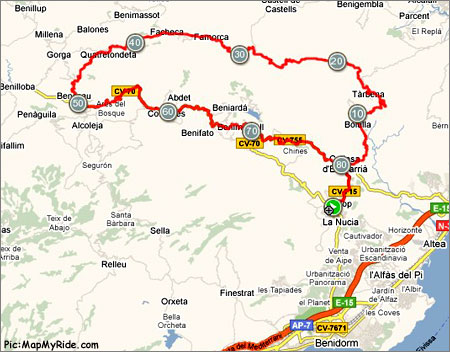 Not a bad day’s work: 85k and 1446 vertical meters of mountain goating.

Who knows, you might even meet Alastair, if he starts getting out on that nice TIME!

Now, where’s that duty free brandy and anis, so I can mix a ‘sol y sombra!’ 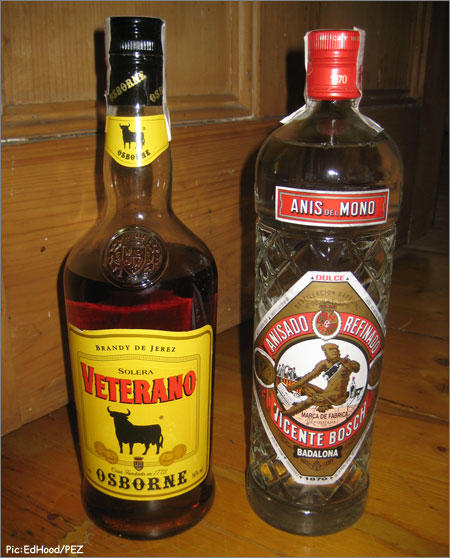 With thanks to Al for sharing his fascinating local knowledge and some magical places with us, not to mention his assistance in editing this article. 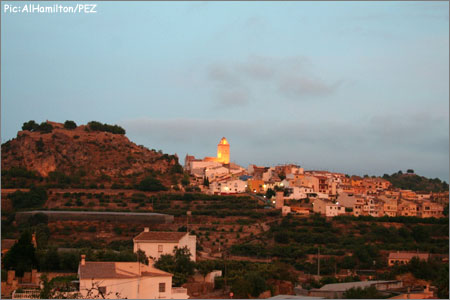 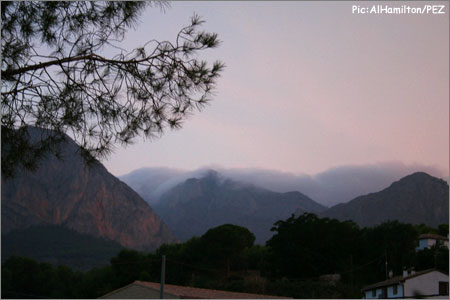 Some views from Al’s town of Polop.

For a closer look at the route and the area, move the mouse right HERE and click!
Like PEZ? Why not subscribe to our weekly newsletter to receive updates and reminders on what's cool in road cycling?