VIDEO: It took me a few tries to get Milan right, but now it’s one of my favorite cities. Over the years I’ve honed this mini city tour to get my dose of Italy’s fashion & industrial capital – which usually happens after a long flight when getting out there is the best way to power through the jetlag and soak in the culture, vibe, and negronis – of this great city.

I stay up near Porto Venezia where hotels are less expensive, great shopping is right there on Corso Buenos Aires and the Duomo and Galleria V. Emmanuelle II are just three subway stops away. I was also shooting on GoPro Hero 7 for the first time, so bear with me on that.

If you’re going to do Milan right, you get off the plane, grab the power shower, maybe an espresso, and get out as soon as you can, and hit the scene because this is a great city.  There was a time when I actually didn’t like Milan very much, but that was before I got to know it.  I think this holds true for any city in the world, once you figure out the parts you like, and the parts you want to use there are a lot of great cities that don’t seem great on the outside or when you first get there, but you discover that they actually are. 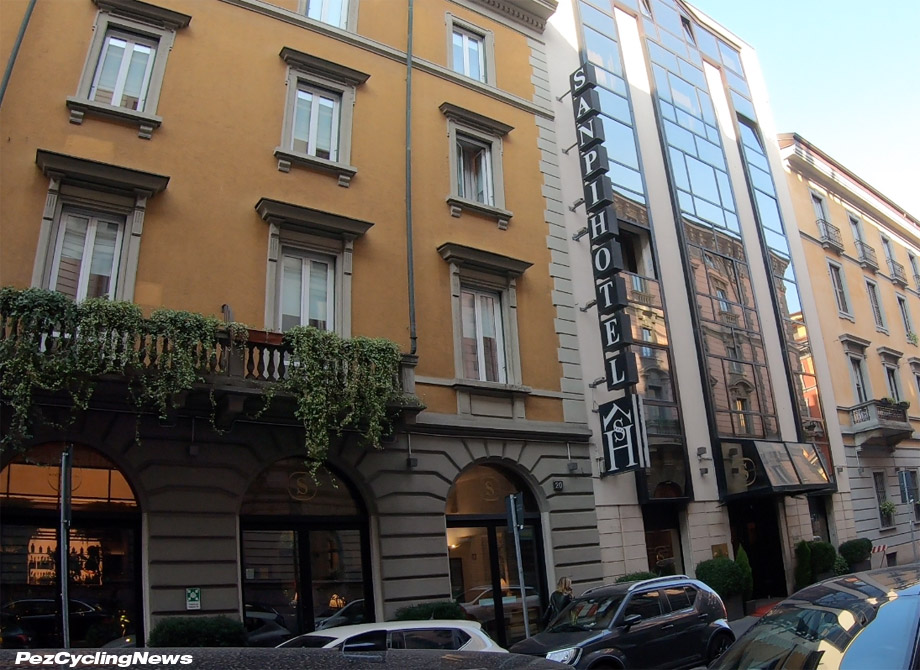 My hotel for the trip – the Hotel Sanpi – reasonably priced like most of the hotels around Porto Venezia, but parking is a couple blocks away and costs 20Euro per day – but it was easy. 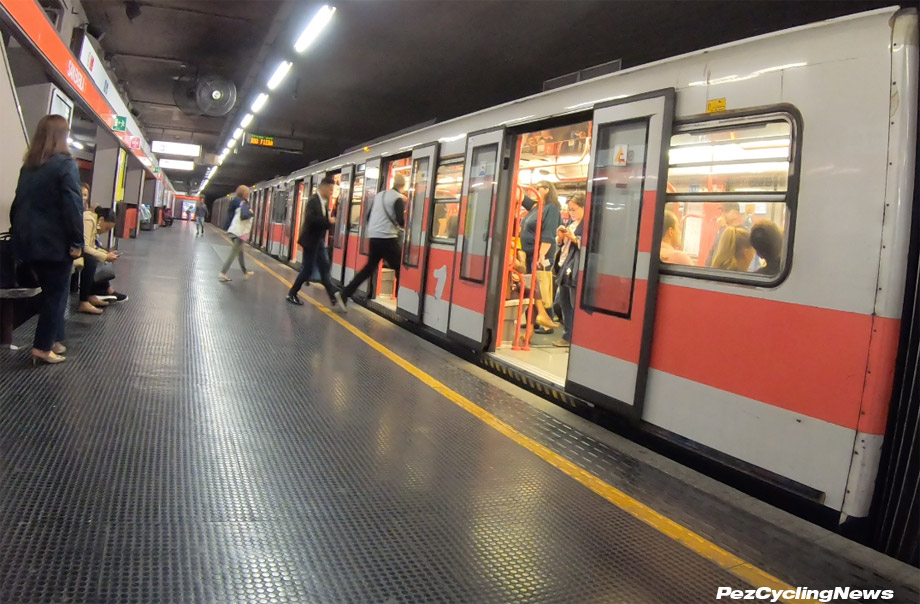 The subway is easy and covers so much of the city – there’s no need for a car to get around. 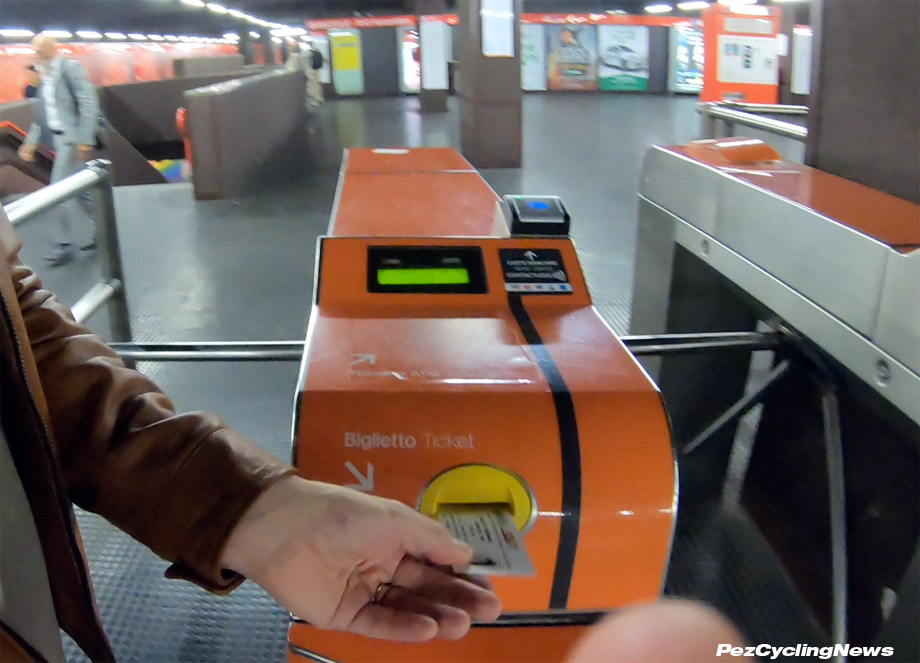 Every time I visit I see people trying to figure out the subway tickets… It goes in here – and pops out another slot, allowing you to pass through the turnstile.  Now, we’re going to go hop on the train, and head on down where the action is at the Duomo but keep your ticket, because you need it to get out again. 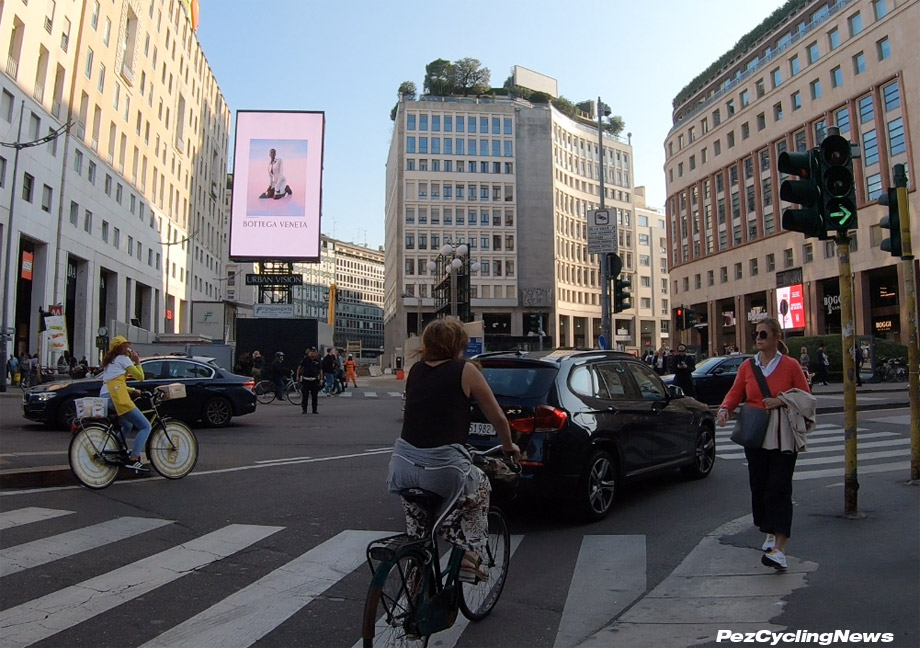 Get off the subway atPiazza San Babila – then follow the sunlight to the Duomo. 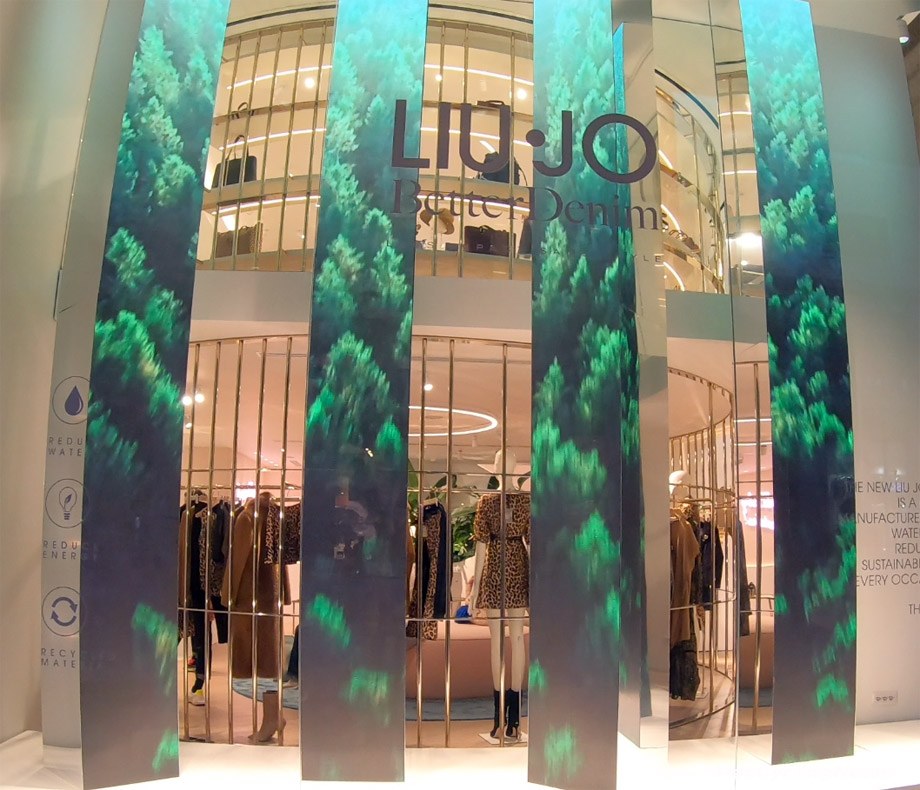 The Corso Vittoria Emanuale II is a massive pedestrian area with all the shops an fashionista could want.  Those are four giant video screens in the window display of Liu Jo.  Of course, my first order of business, when I land here in Milan is to hit the shops. And my deal with Mrs. Pez is, “Yeah. You can go to Italy without me, but you got to do a little shopping for me.” 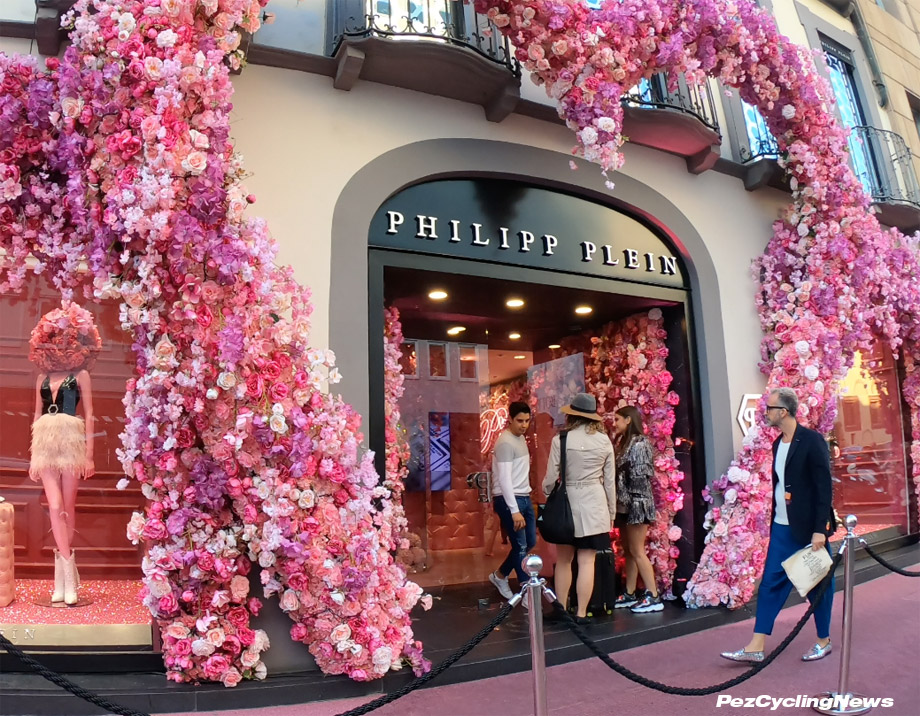 Milan’s famous fashion Week was on when I visited in late September, and the shops were dressing up  for the occasion.  Italians never shy away from color.  In fact you have to stand out to fit in. 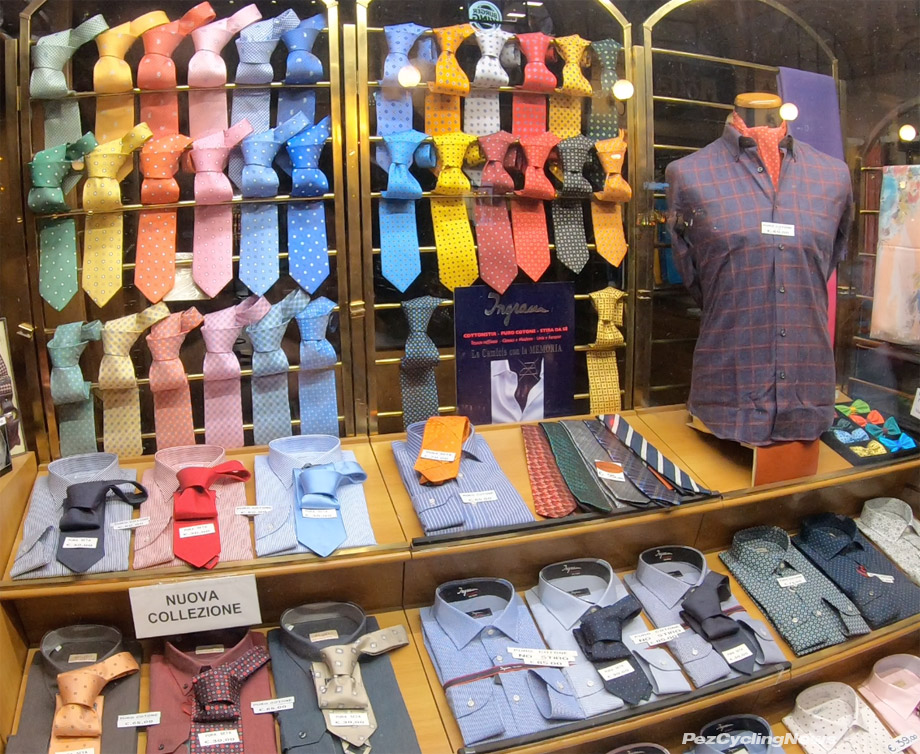 Once I’ve done a bit of shopping the next thing, the next course of action, is to head for the Duomo and get a Negroni. We’re on Corso Vittorio Emanuele, which is a big pedestrian street filled with shops, and Italians out for their passaggiata as they do every night before they go for dinner, or on their way home for work. It is a great, great scene down here. 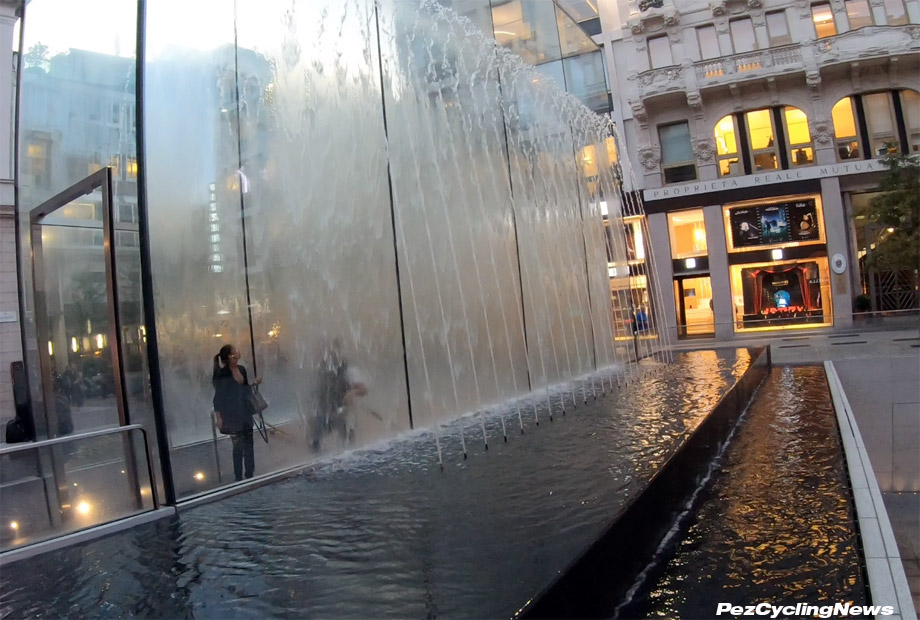 A new fountain here at the Piazza del Liberty since y last visit. 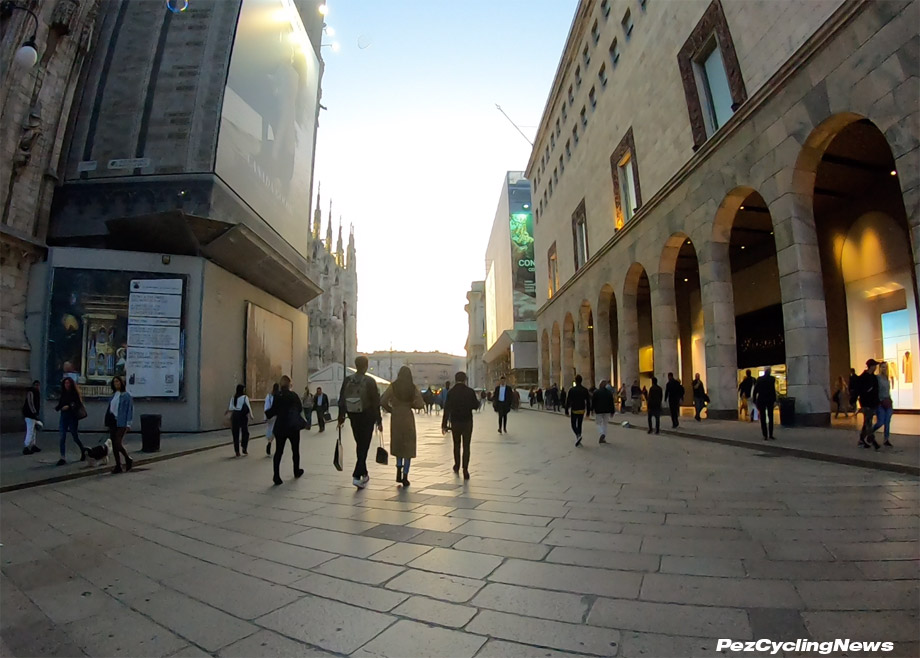 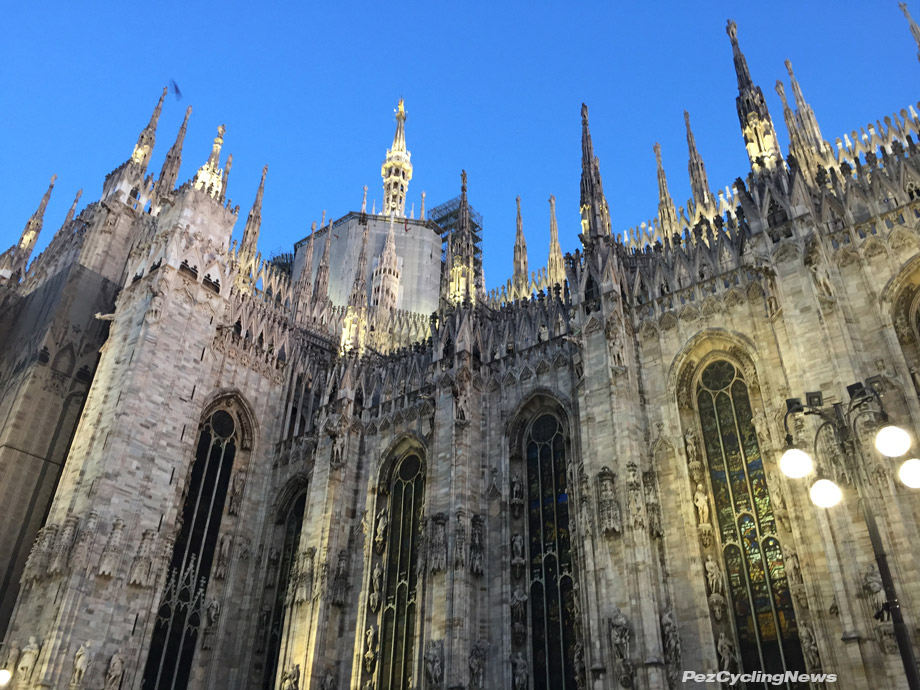 We’re right in the heart of Milan, and, of course, no trip to this city is worthwhile unless you come right down here to the center. This is the Duomo. It’s the biggest Catholic church in the world. It seats 20,000 people inside there. You can get up on top, if you know where the elevator is, and there’s some fantastic views of the city from up there. 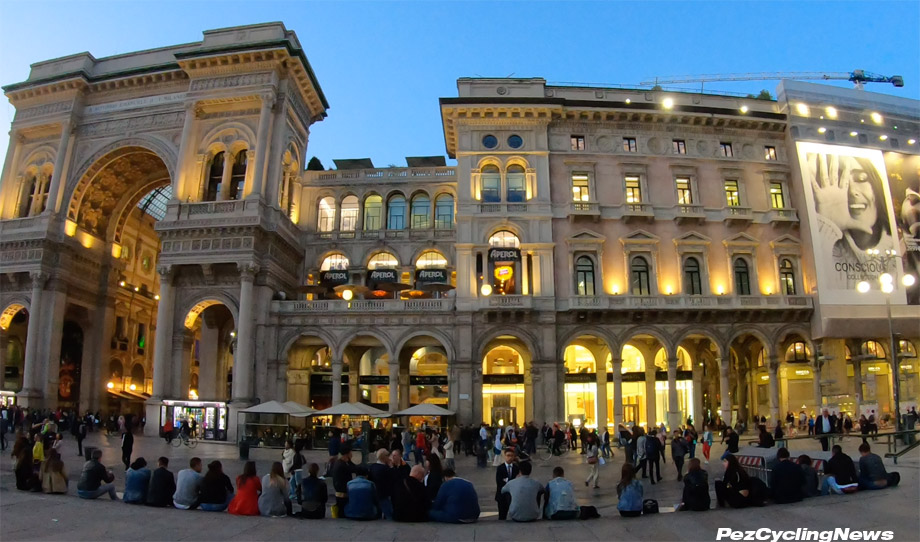 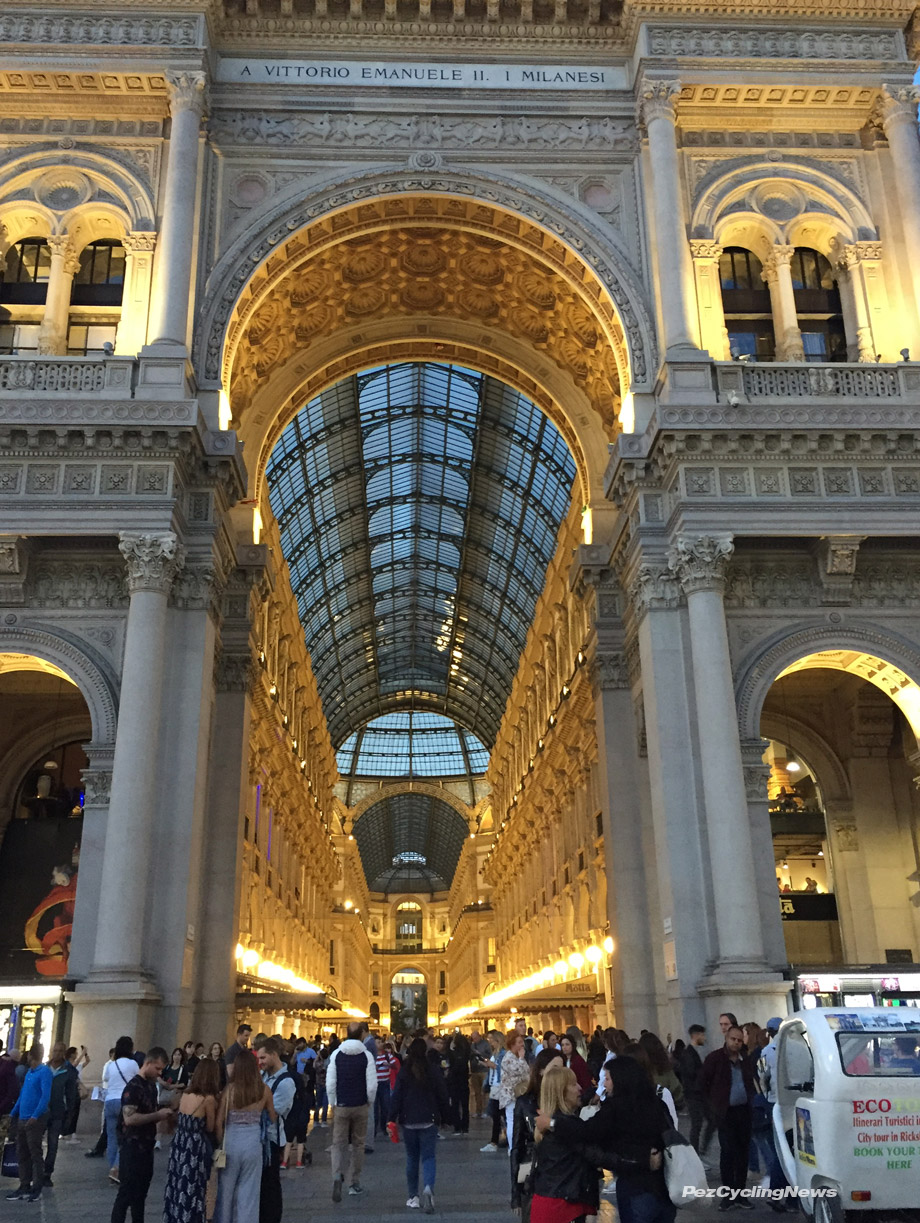 Something everybody does here is come into the center of the Galleria Vittorio Emanuele II, and spin around on the bull’s testicles.  It’s good luck, and it means you’re coming back to Milan, or something like that. 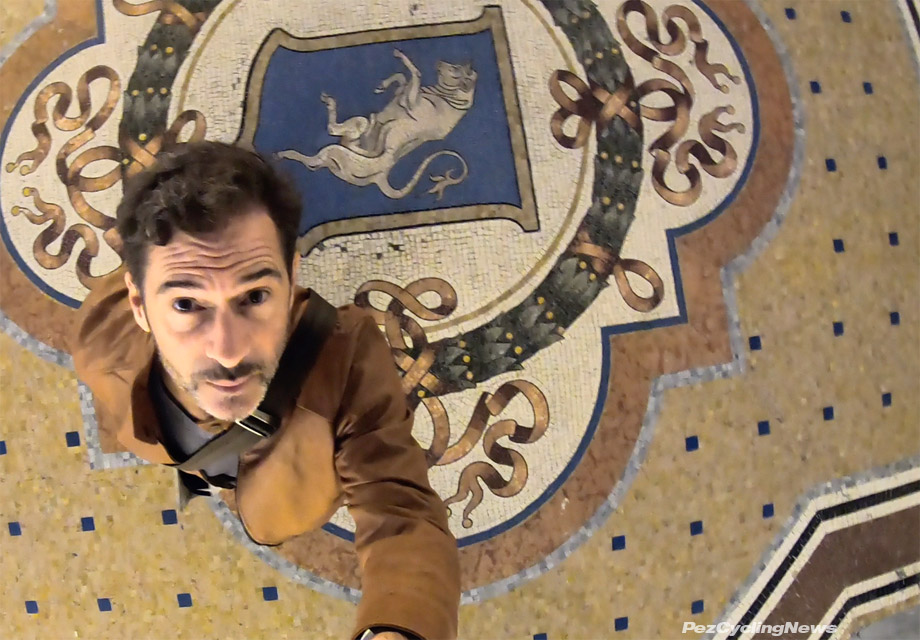 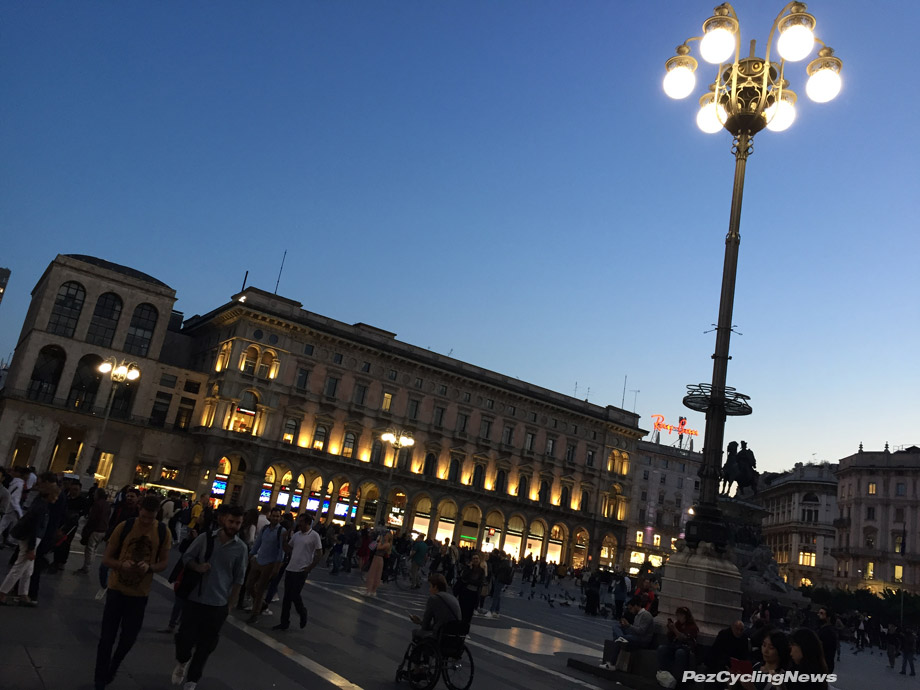 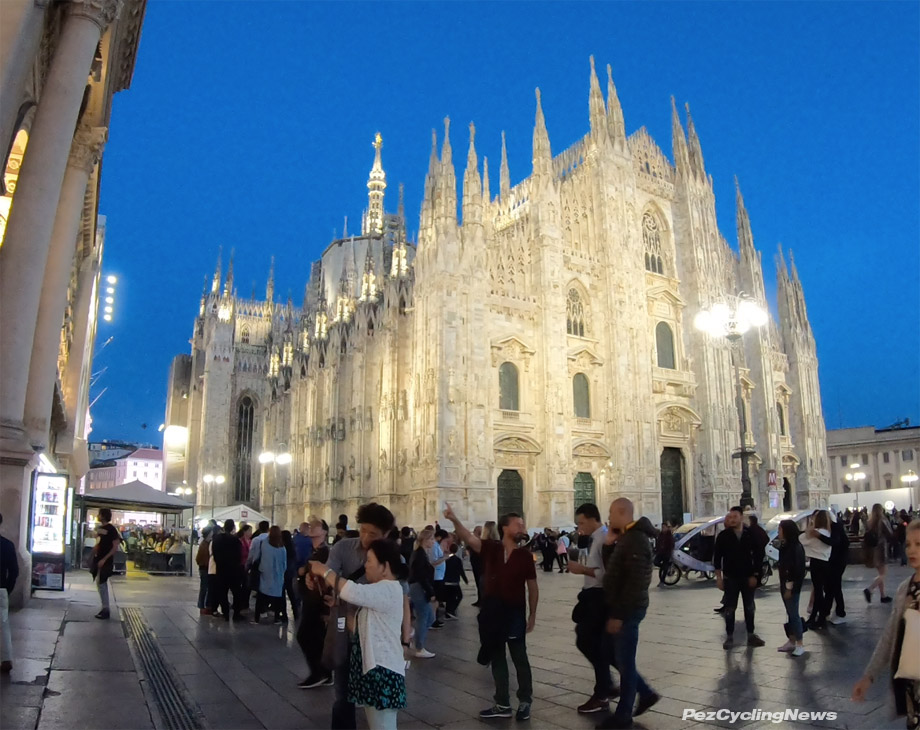 There’s two or three good bars here and they all know how to make a good Negroni.  They serve up some awesome snacks, chips, these great little crostinis, some olives. I like to settle in for about an hour, watch the world go by, it’s the perfect Italian experience. 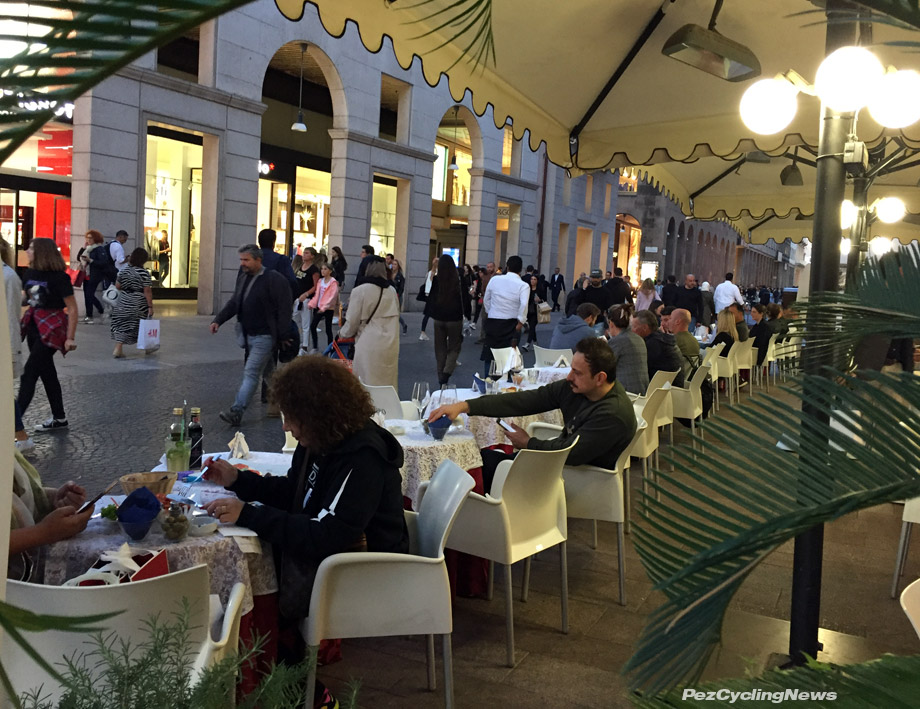 Le Tre Gazzelle – one of my favorite stops for a negroni. 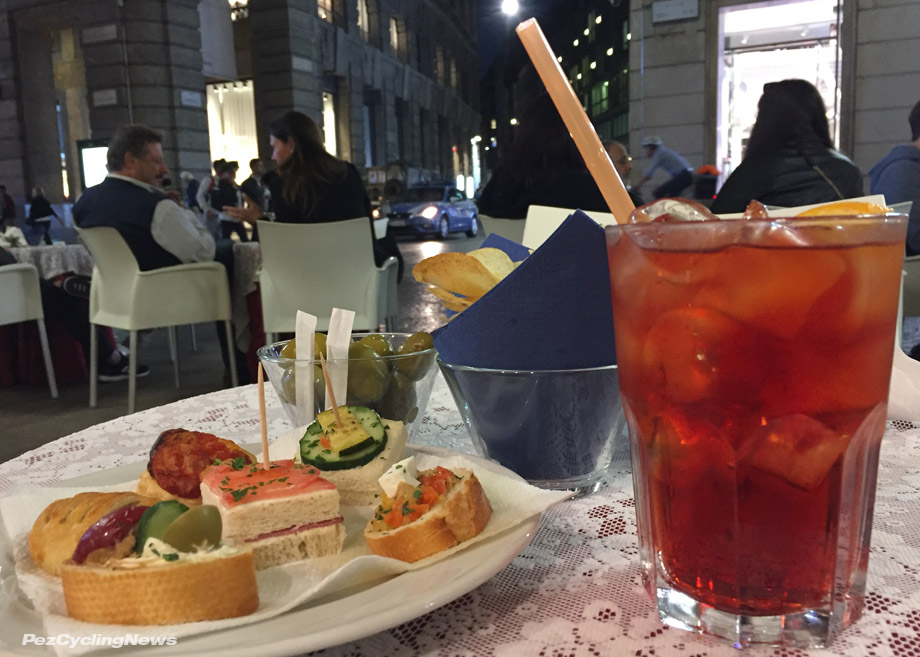 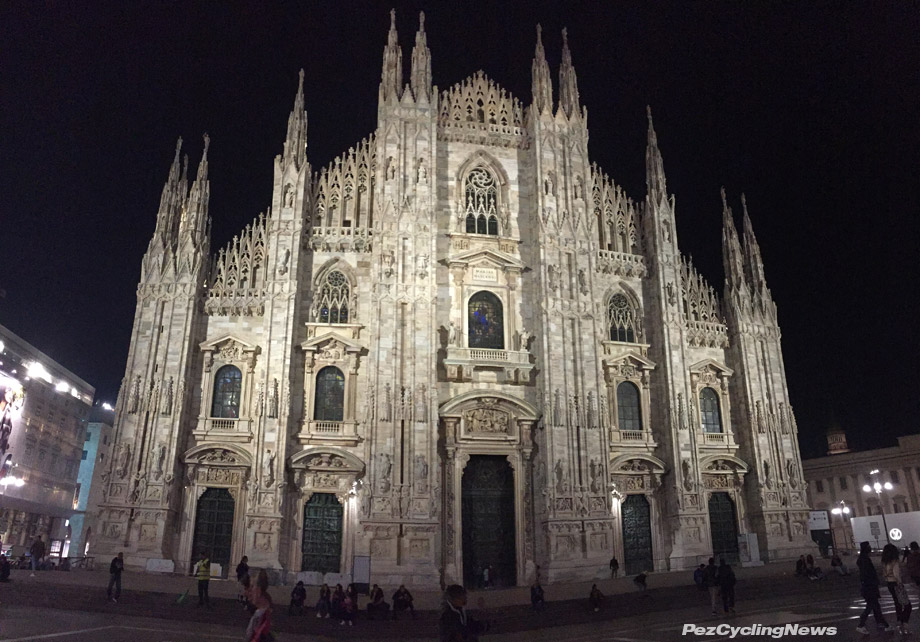 For a bit more on my mini Milan city tour –  see my video on the PEZ Youtube channel.

Thanks for reading – Pez