Milan-San Remo is one of the oldest Classics – this weekend will mark the 99th edition – but the race has changed with modern times, as our Nick O’Brien discovered while riding the final “capi” that make it famous, the corsa is as tough and exciting as ever…

– This story first appeared in 2005, but is definitely worth another read.

It’s Spring and at this time of year every hot blooded Italian has only one thing on his mind… getting down to San Remo ahead of anyone else. Or that’s the way it seemed last Friday as I drove down the Ligurian coast fighting for space on the Autostrada with hundreds of Fiat driving maniacs all doing what is one of Italy’s most popular national pastimes – making sure you’re first in line for everything, regardless of what it is – perhaps that’s where Signor Cipollini gets it from.

San Remo Here We Come
The atmosphere in and around this famous Seaside resort is electric as thousands of fans descend on it for ” la Primavera”. The 96th Milano – San Remo is coming to town and I’m gonna’ be there. I’ve already got a result second only to winning on the Via Roma itself, not only have I been asked to cover the race for PezCycling, but I’ll be riding a new De Rosa King Xlight for a Mediterranean road test – talk about double whammy, I haven’t felt this good since Roger Hammond took third in last years Paris Roubaix (us Brits don’t have many results to celebrate!) 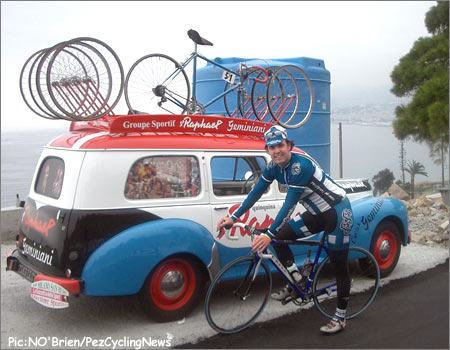 Nick set out to discover the connection between the past and present at the 96th edition of Milan-San Remo.

Appreciating the Past
Things are looking good as I sit here sipping my cappuccino, The bike’s getting lots of attention and a general sense of anticipation for the arrival of the season’s opening classic is beginning to spread around the early morning customers in the cafes and bars on the beach front. Italians have a great sense of tradition, and having married into an Italian family I’ve realized that this is based on the misconception that everything was always better in the good old days, not least the world of bike racing, as I’m constantly reminded by my Father in law.

In “his” day (anywhere from 1920 to 1970) races were longer, riders were tougher, hills steeper, bikes heavier etc. etc… yet some how things were always a lot better, especially when it came to the golden era of Coppi and Bartoli. Now far be it for me to dispute these non-scientifically proven, rose tinted views held by the older generation, but on a day like today with the race expected to arrive in about 7 hours and the current golden era of Italian cycling spearheaded by Petacchi, Bettini, (and even Basso and Cunego for the Grand Tours) on its way, I can’t help but think with all due respect, these old guys just don’t know what the [email protected] they’re talking about. But that’s the point in Italy – everyone’s got a view on this race and that’s why I’ve always wanted to get under the skin of this legendary classic and find out why it means so much to have a win at San Remo on your palmares.

It’s said that if you win San Remo you’ll never have to pay for a drink in an Italian bar for the rest of your life. But what’s not said too often is that with all the bar room philosophers around you’ll wish you’d done as Zabel did last year, and put your hands up a bit earlier to avoid dying of boredom. All of the greats have won here Coppi, Merckx, Gimondi, Kelly, Marc Gomez (I know, it was 1982 a bit freaky, but somewhere an Italian will have a view on him – ). 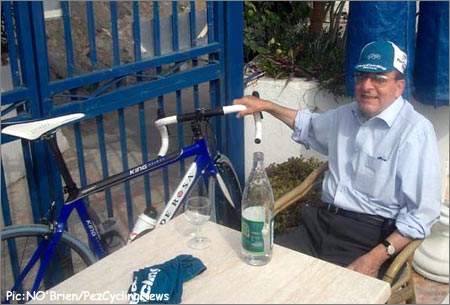 The race is steeped in history with climbs like the Turchino Pass and the Poggio forming the back drop to some truly heroic rides, it’s this pedigree combined with my father-in-laws insistence that the greatest ever San Remo was in 1964. He just happened to be there to witness Tom Simpson’s win – which if you talk to any tifosi – was due in no small part to the help he got from the Italians, even though he was actually riding for a French trade team – don’t you just love their patriotic imagination!

That inspired me to drive 14 hours solid across Europe together with my pregnant wife and inlaws to see for myself the magic of this eternal Cassic.

My Leadout Banana
My plan today is to ride the coast road down to the town of Imperia and then climb the “Capi” back, prior to the race, with the intention of watching the riders on the Poggio and then following back down into San Remo for the post finish action and presentation and Press conference. In principal this is all achievable. In practice, however, as I order my third morning coffee and the waiter starts giving me his prediction for a Petacchi win this afternoon whilst illustrating the Fasso Bartolo lead out tactics with 4 bread rolls and a banana, I realise I better get going or else my leisurely paced ride of about 70km might need its own banana lead out train to get me back in time.

The glorious thing about Italians is they all have a contact and where Sports are concerned, they’re the masters, even my taxi driver in Milan, once he realized he’s taking me to the pre race press registration, decided to tell me who’s going to win. Having been told by some leading authority he was actually putting Ђ100 on Valverde and preceded to pull a list of betting odds out of his glove box whilst negotiating the Milano rush hour!

Anyways…the ride along the coast on a warm, if a little cloudy day, is stunning. And although in recent times the route has been criticized for being too easy, I really admire any “sprinter” who after riding 250km from Milan is still in the action over the final 50 kilometres because this coast road twists and turns over several headlands that apart from being steep little buggers, also expose you to the winds off the Mediterranean – so I for one reckon anyone who’s there at the finish deserves maximum respect! There are no easy wins at this level. 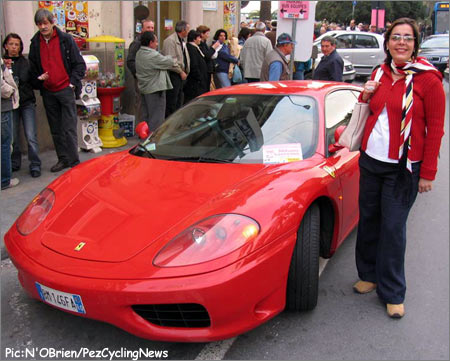 Like the cherry on top – what’s more Italian than a bright red Ferrari – lovingly adorned with Mrs. O’Brien and the future baby O’Brien.

It’s still early but the towns along the route are getting ready for the few seconds of madness when the race flies through, flags and bunting are everywhere and the roads are already getting chalked up, with an equal number of Rebellin’s to Bettini’s – whilst from a non-Italian point of view the only “Stranieri” or foreigners to get a regular mention on the tarmac are Boonen and O’Grady – perhaps Oscar Freire’s win last year and his subsequent world champs title mean he has had way too much encouragement from the locals already.

Die! Die!
Talking of encouragement I’m in need of a bit myself as I struggle over a short climb into a headwind a group of teenagers propping up vespas shout at me “Die, Die” which is bang out of order since I’ve got my best “this isn’t hurting a bit ” expression on… it’s not until later when I’m berating the state of Italy’s yobs that I realize they were in fact pleasantly shouting “Dai, Dai” which translates as “Go, Go, give it some…” Still, I bet they added you fat B*****d once I got out of sight.

The race itself has already started out from Milan this morning (no doubt cheered off by designer clad locals in what has got to be one of the few remaining Classics that actually starts in the centre of the town from which it takes its name) so as I’m riding along I can see small clusters of people gathered round TVs and radios catching the action as the race travels across the Lombard plain towards the first real test of the day. The “Turchino Pass” takes the riders over the Appenines and drops them down into the western suburbs of Genoa before turning west along the coast through the seaside towns that in a couple of weeks will start filling up with holidaying families from Turin & Milan. 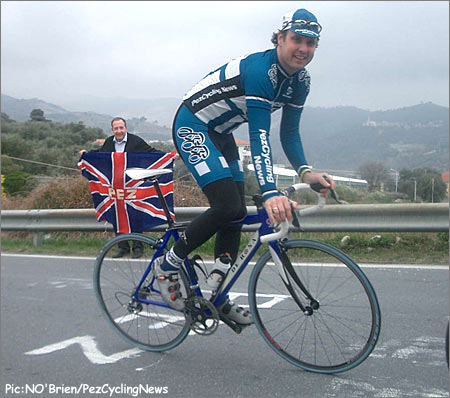 Full sprint or Track Stand? – it’s such a fine line on the Cipressa.

Tackling the Cipressa
Just before Imperia, I turn off the main road and I’m straight onto the infamous Cipressa – a climb that I’ve heard is sprinted up by anyone with any notion of being involved at the finish, because if you’re not in the top twenty over the top you’ll miss the cut on the descent, which is notorius for crashes. It’s not long before I’m out of the saddle too, in a kind of a sprint that perhaps more closely resembles a “track stand”. As this 10% lung burster meanders through olive terraces I comfort myself with the discussion I’d had earlier with my waiter, who insisted the course had got easier of late because of better road surfaces etc. – yeah right – like he knows what he’s talking about (he is actually right of course the road up has been recently tarmaced BUT it still hurts).

Qui E PEZ?
It’s amazing to be riding the same slopes that later today will be swallowed up by the pro’s and by my reckoning I’ve just about held my own with most of the locals riding up at the same time. Plus earlier in the morning I’d driven up the same slopes to partake in the time honoured tradition of chalking the afore-mentioned new tarmac with a few PEZ’s so I had something to aim for! Although as I painted, the crowd that gathered from the F.Sacchi Fan Club were scratching there heads a bit as they checked their Gazzetta dello Sports for a rider called Pez!

After about 5km of pain I reach the top and try and compose myself as I pass even more club riders, all looking uber cool, fully colour co-ordinated and carboned up coming towards me. The descent is as imagined, absolutely mental and even without a screaming bunch on my wheel or a TV motorbike getting in my way, it’s easy to see how you could come a cropper on any of the many hairpins back down to the coast.

But to be fair the De Rosa makes it a pleasure doing everything I ask – both into and out of the corners my confidence is sky high as I’m riding back towards San Remo. It takes about 20mins to get to the capo Verde and after a short run along the main road I swing right to start to climb the Poggio. The roads are filling with more and more riders and the crowds along the route are getting thicker.

• To experience Italian cycling for yourself visit: www.GrupettoItalia.com

Stay tuned later this week for the exciting conclusion as Nick battles a worthy Italian adversary down the descent of the Poggio and all the way to the finish on Via Roma!
Like PEZ? Why not subscribe to our weekly newsletter to receive updates and reminders on what's cool in road cycling?