Destination Cycling is leading perhaps the ultimate summer cycling trip as guests on their Tour de France Challenge ride the entire 2006 TDF course – tackling each stage one day ahead of the actual race. With one week down and the tough stuff still ahead, here’s the latest dispatch from north west France.

Blue Versus Yellow
In France these past two weeks of July, Blue has replaced maillot jaune yellow as the color of focus and media attention. Not once in the last two weeks has the face of a cyclist graced the front page of L’Equipe (founded by Henri LeGrange himself). Tonight, the Tour de France Challenge team finds themselves in Bordeaux on the eve of the World Cup Finale. Although the French public and media may have temporarily forgotton about the Grand Boucle, the TDFC team has not… 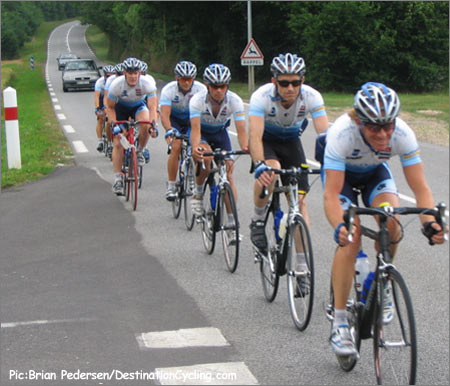 Destination Cycling’s Director Sportif, Joe Tonon, multi-tasking as he pulls the team along during Stage 5 – Beauvais to Caen.

Destination Cycling’s Fantasy Camp
Every day they are living out their fantasy of riding the entire Tour route like professionals. Destination Cycling is leading a group of ordinary cyclists as their own “pro team” for a month, to experience what it’s like to ride the TDF day in day out supported by an experienced route staff.

Living the life of a pro team involves discipline and each day is scheduled to run with precision. 7 AM breakfast – 8 AM on the bikes – 12 PM Lunch – 5-7 PM Massages – 8 PM Dinner. Every detail of every day is planned (hotels, meals, routes, equipment) and is orchestrated by Destination Cycling’s staff of operations manager, soigneurs, and mechanic. Two support vans accompany the riders on the road with navigational, nutritional and mechanical support while the third van goes ahead with the luggage to the next hotel to arrange that evening’s schedule. 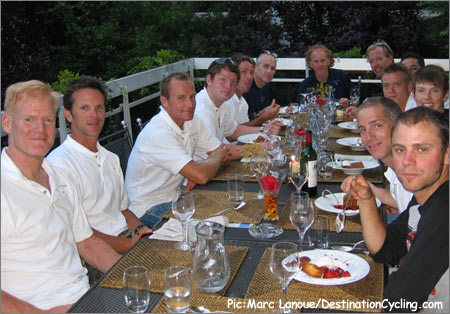 Getting onto a fixed dinner schedule is not too hard after you’ve pedaled for 7-8 hours.

All the riders have to think about is riding their bikes. They ride the same routes as the pros, doing it the day before the actual race. There are not many sports in the world where you can participate on the exact same course as the pros. Riding the TDF the day before allows for unique opportunity to meet not only the fans camping out along the route but also the groups involved with the Tour itself, including international TV crews, Motorcycle radio reporters, sponsor caravans, and sometimes the racers (as we sometimes stay in the same hotels as the pros). The riders received their second “brush with fame” as they were interviewed by MAXIM Magazine (Belgian edition) in Valkenburg in the Netherlands. (First was their encounter with the Devil the week before at the Prologue in Strasbourg). 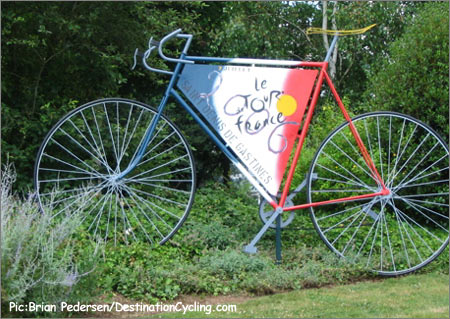 After a few days on the actual TDF parcours, sights like this become commonplace.

Since leaving Alsace, the team has journeyed through Luxembourg, Belgium, and the Netherlands. To date, they have covered 1,476 km of the Tour. At this milestone, Team Coach Josh Powers and Riders Rob Kantor, M.D. and Mark Nebeker shared a few words with Pez from the road and how the team has been riding together.

Pez: What would your coach’s report for the team be after Week 1?
Josh Powers: “The team has settled into a nice groove on the saddle. Either that or the saddles have worn a nice groove into the team members; whichever it is, the early riding bugs have been worked out. The team members have learned how to work with each other’s idiosyncrasies and we’ve become efficient during these first few stages. We’ve silenced the familiar competitive demons that whisper “push a little harder, they look like they’re about to crack” and we have realized that anything that doesn’t push the entire team forward holds us back. Each member of the team knows how his fellow partners in pain ride. We know when they’re going to stand up, when they’re going to sit down. When they drink and when they eat. I am confident that every rider knows who rides behind him without even looking, but merely by listening to the unique sound of the bike. 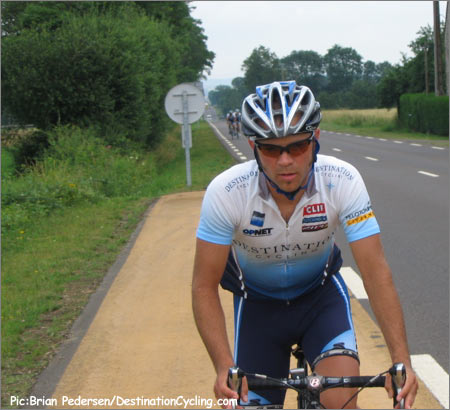 Coach Josh Powers gets back on the road.

With only one third of the stages behind us it’s difficult to say what will happen. We have yet to climb the Pyrenees and the Alps are almost too far away to even start thinking about but, thus far, I’m extremely satisfied with our forward progress and the methodical nature of each team member. The first few stages were a little rough around the edges. Nobody really knew what to expect from the other riders and the eating regimen wasn’t engrained. To make things even more difficult, the first few stages were hot. Hot might even be an understatement. With the wind in your face the sweltering heat and humidity became reasonably tolerable but anytime the grade kicked upwards or the pace slowed it became intolerable. 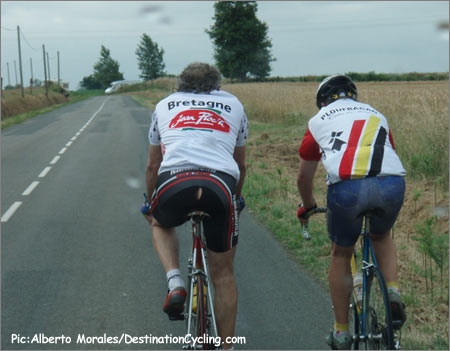 Riding in Brittany: the Belgium of France is with its famous passion for all things cycling, including locals logging the afternoon miles.

With each mounting day the heat wore each rider thin and the lack of air conditioning in most French hotels compounded the problem. The uncommonly hot weather served as a reminder to us of just how difficult this ride would be and what we were looking forward to as we moved further and further south towards the Pyrenees into Spain. The stifling heat subsided as we made our way towards the Brittany region. Cool showers threatened throughout the day and the riders have lulled into the same numbness we experienced last July. Fortunately it’s not the same numbness one might associate with long hours on the bike; this particular numbness is that of passing time. You start pedaling in the morning and before you even to think to look at your watch the ride has progressed past the 4-hour mark.” 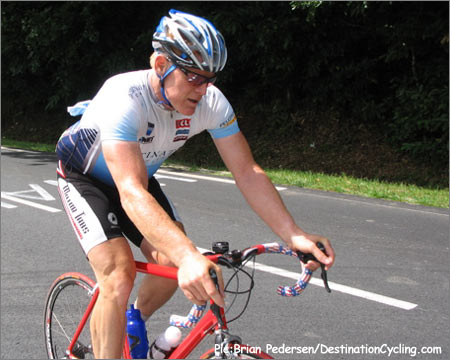 Former Linebacker Mark Nebeker takes on the TDFC – our very own Magnus!

Pez: What has been your greatest challenge so far?
Mark Nebeker: “The fact that I am at least 55-65 pounds heavier than the average rider on the team! (Mark was a former linebacker – recently inducted into the L.A. Times Sports Hall of Fame for his college football performance). It has been difficult for me to get my rhythm with the team when we approach hills, as I have had to adjust my riding style to keep in line. As you can imagine, on the other side of the hills, I’m already enjoying my ham and cheese sandwich before the others reach me. It’s been a challenging adjustment for me to try to balance my abilities in order to conserve my energy and to help the team at the same time.” 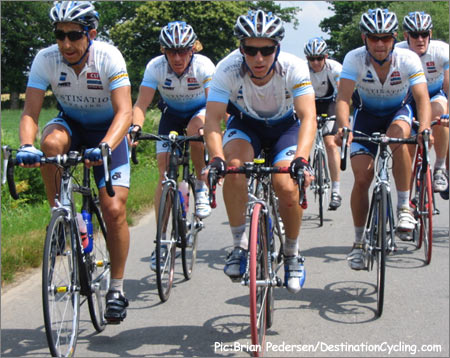 Pez: What has been your favorite stage so far?
Rob Kantor, M.D.: “I’d have to say that my favorite ride so far has to have been the first one. The “challenge” of the TDFC has been a source of anxiety that transformed into motivation. I’ve stuck to the training, almost always exceeding what Coach Josh wanted me to do, battled through a January knee injury, saddle sores and other overuse injuries. I’ve endured comments from family and coworkers about how thin I am, and have had 13 pairs of pants altered so they no longer fall off of me. I’ve managed to arrive here with the support of my family, feeling healthy and strong, en bonne santй! Yet, the doubts persisted. Will I be strong enough? Did I train hard enough? Will the group ride well together?

Getting on the bike with the team and completing the first stage has been the best experience so far. Yes, the group is good and the staff is awesome; yes, my training has paid off and I can keep up; yes, everything Joe promised about this trip has come true. Completing that ride answered all the questions and relieved most of the anxieties. It really didn’t matter if that stage was in the mountains, on the flats, or which town had the best Tour decorations. That stage confirmed that I’m ready and I’m an important part of a damn good team!”

Italy may have won the World Cup but the French still have the Tour.

Rolling Updates
Stay tuned for an upcoming PEZ exclusive, “TDF Challenge 2006 Rolling Updates” filed from the road throughout the Tour. Hear what the riders have to say ‘straight from the bike.’ Scheduled publication dates include: July 3, July 10, July 17, and July 28.

• In 2007, Destination Cycling also will offer HALF TOUR packages. Choose either the first or second half of the TDF route. Visit www.destinationcycling.com for more information on how to register and reserve your place on the team!