Putting the final wraps on our TDF coverage is one last report from Destination Cycling’s Tour de France Challenge. After 3 very long weeks of riding the entire Tour route, they arrived in Paris with mixed feelings. We talked with the team on the Rue de Rivoli.

Pez: Describe your long-awaited ride into Paris. Any final thoughts?

Joe Berkeley (guest): “After the training, the sacrifices, the hardships, the overuse injuries, the crashes, the heat, the headwinds, the drunken Danes singing late into the night, the flats, and the mountains, seeing the Eiffel Tower in Paris marked the end of a dream, the beginning of a return to reality. On many occasions, our Director Joe Tonon told us that the Tour de France Challenge was not a race. For us middle-aged men with families and mortgages, jobs and responsibilities, there were no cash prizes, no endorsement deals, no interviews with late-night talk shows. Yet while this event is not a race, for us, and for the professionals, it is a chance to test your mettle. To see what you are made of, how you handle adversity. It just so happens it was the most fun test we ever took.” 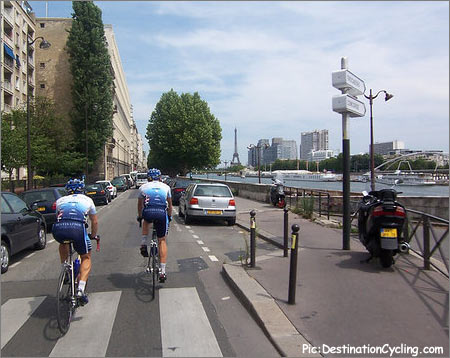 The crew arrives in Paris.

Alberto Morales (guest): “The terrain we have covered around France, gave us unparalleled scenery and extreme challenges, especially in the mountains. The company I kept was awesome. The support staff, the participants, everybody here had a can-do-anything attitude, extreme toughness that one does not see everyday. They were an inspiration all along.”

Rob Kantor (guest): “This truly was the trip of a lifetime. It met or exceeded my expectations in every way. As a team we accomplished our goal of riding the entire Tour and we could not have done it without the team and staff. I was surprised rolling into Paris though. I had goose bumps as I rode past the Eiffel Tower and onto the Place de Concorde. Although I was happy about accomplishing our goal, the realization of this experience coming to an end and no longer having to maintain the mental edge to get up and do it again the next day left me completely “deflated.” There was a mental energy that had to be maintained in order to prepare for each day’s stage. When that was gone, physical exhaustion took over. In ’89 when LeMond won the Tour in the final time trial by 8 seconds I was alone in a hospital on call room, ignoring my pager and jumping up and down on the bed screaming! Nobody could muster up a fraction of that enthusiasm after our experience. As much as I wanted to get back to my family, I did not want the TDFC to end! Now, back home as I share my experience with family, friends and coworkers, the enthusiasm is back with a vengeance!” 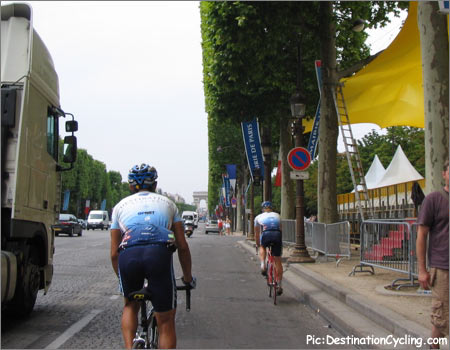 Arc de Triomphe: last one to the arch is a rotten oeuf.

Mark Nebeker (guest): “To ride the [Tour] course is perhaps an attempt to understand it more, to feel more connected with it, to pay honor to it, to recognize it as the greatest cycling challenge there is and to attempt to be a worthy opponent, to say “this is the hardest thing I can possibly try to do on a bike, let me throw myself at it and see what I am made of. It is humbling and empowering at the same time. It weakens you and makes you stronger all at once. It crushes you and makes you feel invincible. Somehow I feel different, but I don’t think anyone will ever really see it; it is something very personal, and I didn’t do this for anyone else to see. In many ways this is the hardest thing I have ever done. This really tested my will, and my personal commitment. I was asked at one point, ‘what motivates you to keep climbing?’ I didn’t really know how to answer the question. As I thought about it later I thought, ‘Because I said I would, and that is what I came here to do.’”

Calories expended by Rob: 72,786, which is equivalent to about 21 pounds of body fat. 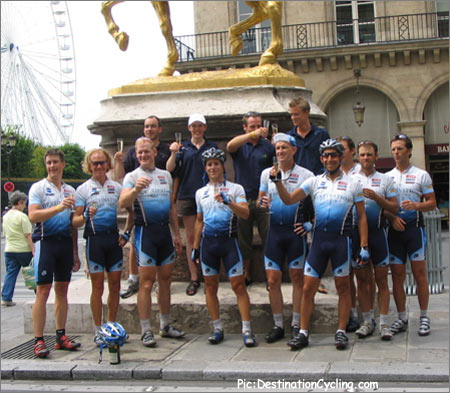 Mark Nebeker: “If we had never descended the other side of each mountain pass (the really fun part of this trip) we would technically be in low-earth orbit about now.” 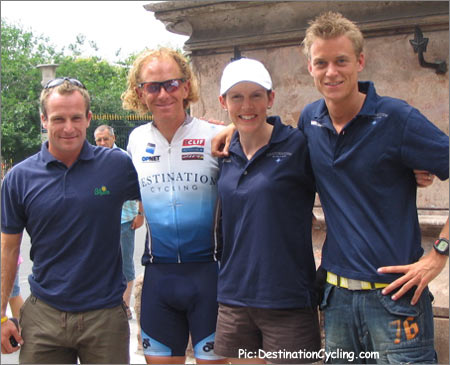 Pez: If you were to do the Tour de France Challenge again…Any key learnings along the way?

Joe Berkeley: If I were to do the TDFC again, I would bring one very small fan with a clamp on it. The small fan would be great for morale in the hotels, and it wouldn’t take up much room in the suitcase. That said, here’s my list of TDFC Takeaways:
1. First, figure out what you want to do. Second, figure out how to do it.
2. Now, stop thinking. If you knew how high the mountain was, you’d never get to the top.
3. Be good to your teammates.
4. It’s your life. Live it the way you want.
5. Health is everything. Take care of your backside.
6. Anything that improves morale is worth doing. A cap on a cold day, a cookie at lunch.
7. The most important piece of equipment is the athlete.

Joe Tonon (Destination leader): We will do the Tour de France Challenge again and we will have new riders along with us….the biggest suggestion I can make is to make the commitment as soon as possible and to ‘train harder and ride easier.’ In other words – make sure you come to the event in great shape and you will enjoy the event that much more!

Pez: What are you going to do next?

Josh Powers, 2005 and 2006 TDFC Coach and Rider: “I’m going to cut all the cables on my bike and take a vacation. Only when I have enough motivation to replace all the cables will I start riding again…”

Brian Pedersen, Soigneur: Going to Egypt with my girlfriend…to a spa. 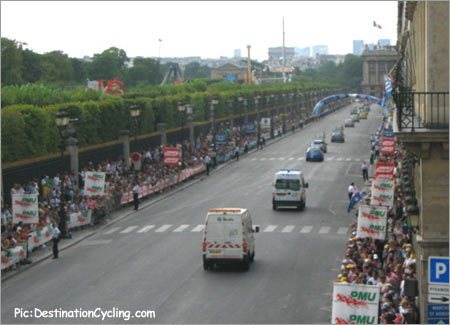 Seeing the race finally finish is a mix of exhilaration and sadness.

Pez: How will you adjust to normal life outside the Destination Cycling fantasy camp world?

Joe Berkeley: “According to Director Joe Tonon, going straight back to work is the best thing you can do right after the Tour de France Challenge. One of my teammates told me he was depressed last year for several months when the Tour was over. Oddly, cyclists are more prone to depression than most athletes, so it’s something you want to keep under control.”

Joe Tonon: “It’s very common among especially endurance athletes that after training for extended periods of time and focusing on one event, one goal, that they will experience depression after the high of accomplishing their goal. The Tour de France Challenge is such an intense experience because of the daily pace, not only the physical challenge of riding the stages but also of the constantly changing environment – weather, food, hotels, surroundings. Nothing is familiar except the daily team scheduled routine. Breakfast at 7 AM, bags down at 7:50 AM, on the bikes for an 8 AM departure… By the time we arrive in Paris, we have to remind the riders what “free time” and “sleeping in” means again.” 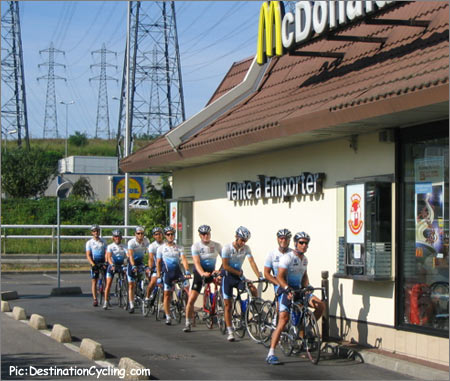 Beginning their re-integration to American culture, the TDFC crew proved they still had their sense of humor.

Joe Tonon: We’ve already received registrations for the 2007 Tour de France Challenge. London, here we come. Also, next year, we will offer two Half Tour packages where participants can choose from either the first or second half of the TDF route. We will also offer a series of 7 day/6 night trips during each of the three-weeks of the Tour, with itineraries catering to both the performance and more casual “cuisine and culture” oriented cyclists. Rumors have started that we may offer a women’s Tour de France Challenge…

In 2007, Destination Cycling also will offer HALF TOUR packages. Choose either the first or second half of the TDF route. Visit www.destinationcycling.com for more information on how to register and reserve your place on the team!