The best GC riders in the world will be hitting the picturesque and very hilly roads of Central Italy this Saturday to take on the 226km, Stage 4 of the Tirreno-Adriatico but before they do our Italian photographer Ale checked the stage out for himself. What he found was some magic scenery, some simply superb riding but also one very difficult day for the riders. Here’s his tale.

There will be only one race on the 2015 calendar that may have a better starting list than the Tirreno Adriatico and that race is the Tour de France. The “race between two seas” was considered merely a preparation ride for Milano Sanremo till a few years ago but the last editions were very interesting and selective, attracting the top GC riders for a star-studded slugfest across the Appenine mountains.

To know something more about this race I’ve taken a day out discovering the route of the 4th stage, a key one, where the best GC riders of the world (Nibali, Contador, and Quintana – minus Froome who pulled out sick) will fight for the first time in 2015 mano a mano and will have the opportunity to hear their breaths and evaluate the others. 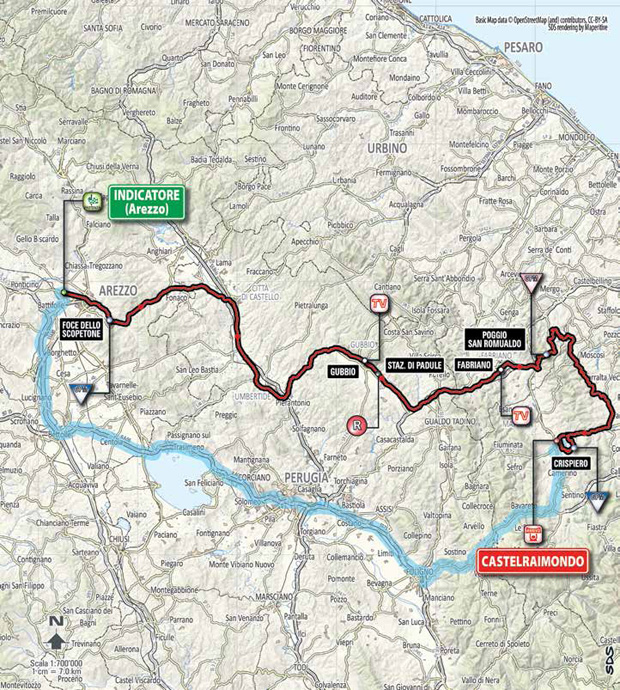 This stage, from Indicatore (close to the mediaeval town Arezzo) to Castelraimondo won’t be the hardest – the day after, finishing on top of Terminillo, will be decisive – but will be very complicate to run and will give the first kick to the general classification. Let’s discover why! 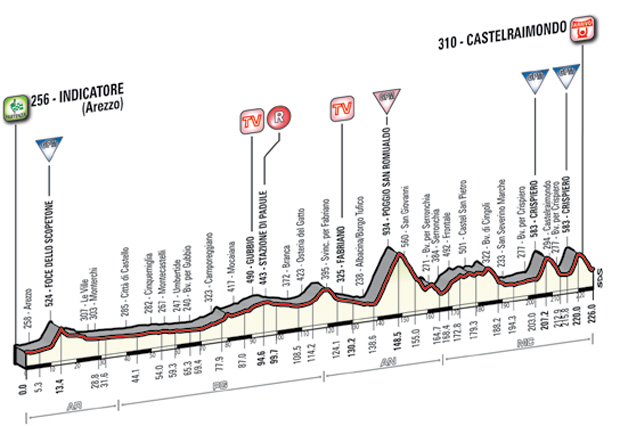 Michele and the History
I’m not in such form to ride 90 km into the Appennines in March and this is the reason why I asked to someone else to do it for me. Michele is an Italian blogger, an amateur climber and also a professor of medieval history. This detail will be very important to better enjoy the day on the road… 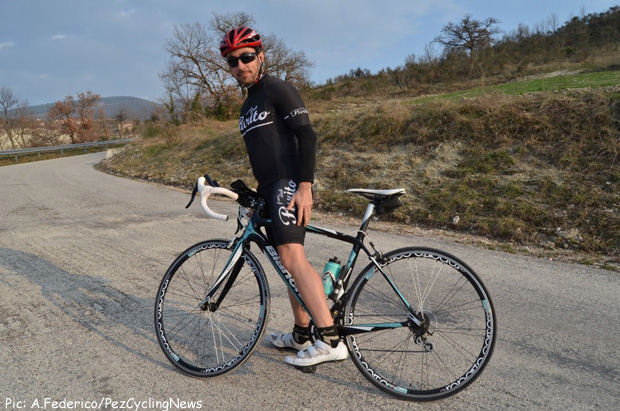 I rode once with him last summer and I understood he was set to a very different level than mine. We climbed two hard mountains in the center of Italy but he had to wait for me all day long. Surprisingly, when I called him for the preview, he replied enthusiastically; maybe just because he was sure I was driving the car!

San Romualdo, the gate of the middle ages
Our ride started at Albacina with 90 km to go in the stage, the road comes up for 9 km until the first KOM of the day: Poggio San Romualdo. 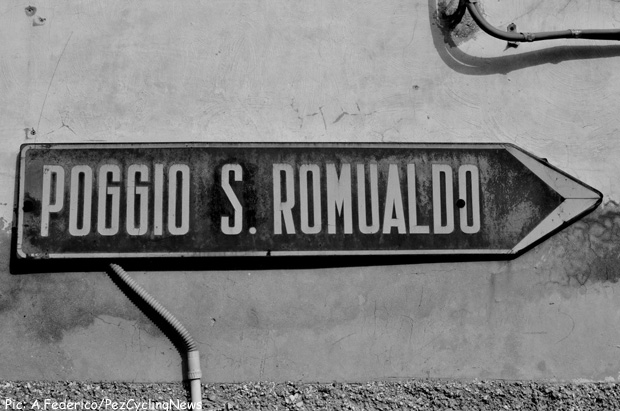 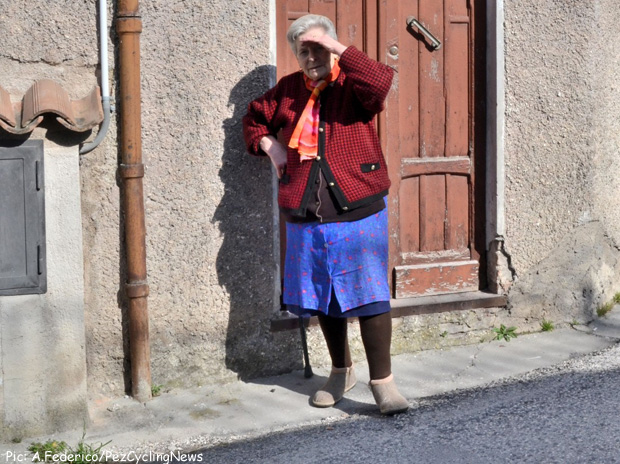 Our roadside previews are always creating some interest amongst the locals

This climb is very regular, with several switchbacks inside the forest on the west face of the mountain, so that the sun shines all the afternoon and the temperature isn’t bad even at the beginning of March. 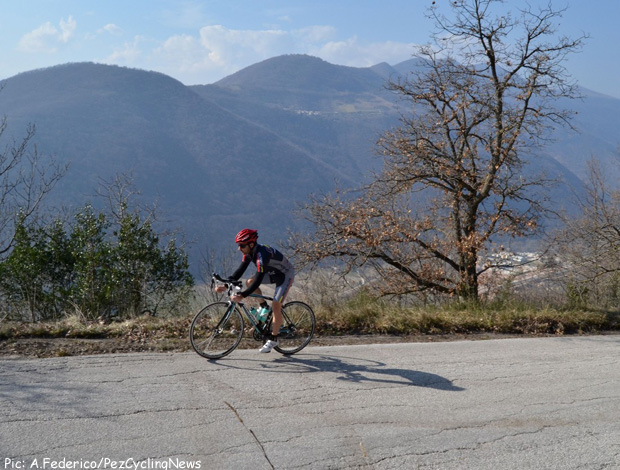 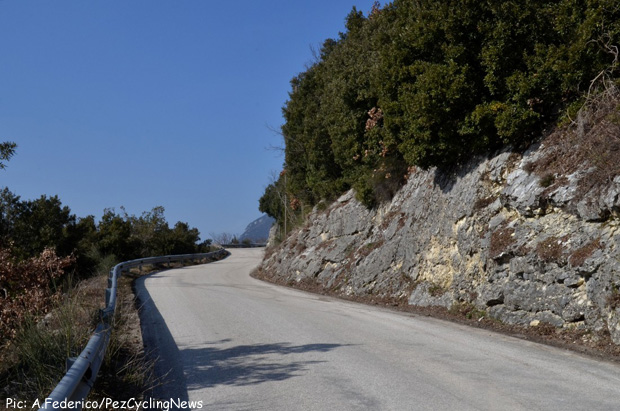 The climb to poggio San Romualdo is 9 km long. It’s a “true climb”, very hard considering that it’s March. This climb is located in center Italy, Marche region, not far away from Ancona city. 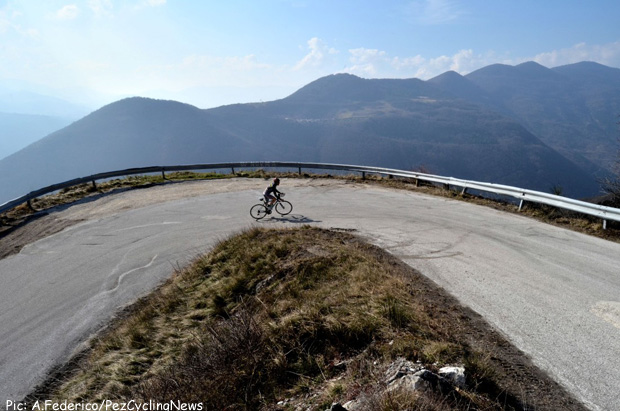 The top is at 900 meters elevation (abt 2900 ft). The road is not too large but not too narrow either but it’s a hard climb in March. It’s far away from the finish though so probably there won’t be such a selection that one would expect from a climb of this kind.

What surprised me a lot is that we didn’t meet a car almost all the way up. The valley below was quite alive but the more we climb, the more we had the impression to enter into another dimension. What will we find beyond the mountain? 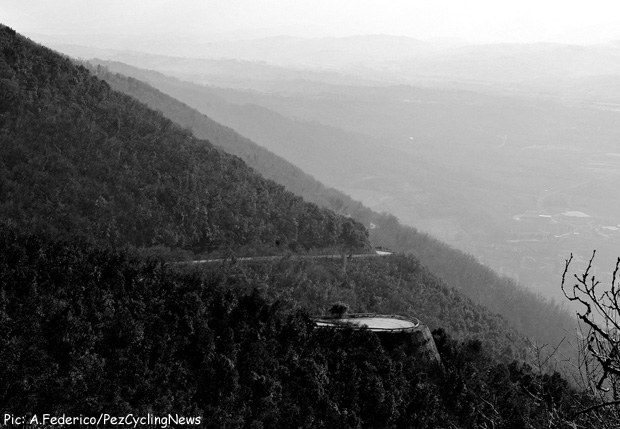 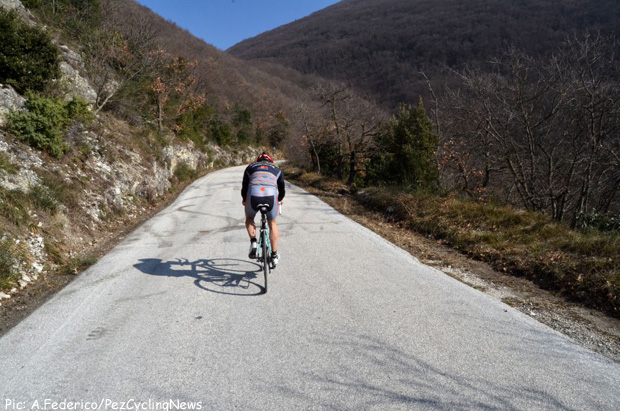 It will be the first time the riders will see the blue color of the Adriatic sea in this competition, but unfortunately the haze don’t give us this opportunity today. On the right side we can see the top of Monte San Vicino with the snow on its top.

But here there are only green fields and a small village which doesn’t rate a visit. The descent starts safe but is less regular than the climb, after some turns and we come to a small village called Vigne. 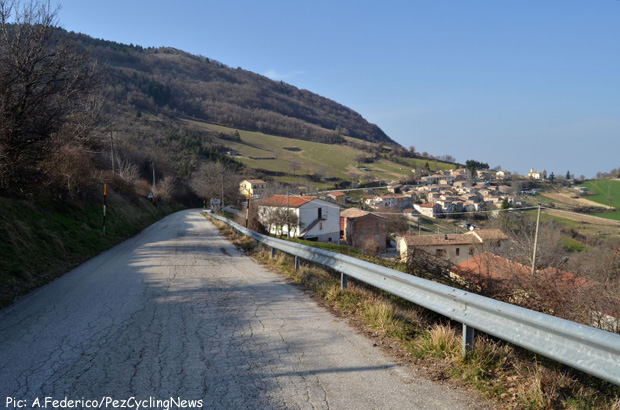 The descent is fast and irregular, in the middle of it a couple of villages, very isolated

A local family is working on the side of the road cutting pieces of wood: a nice picture. But when I approach with the camera they deny the permission to shoot. They reply calm but very firm, and they have axes in hand; there are thousands of better places to shoot, I think… 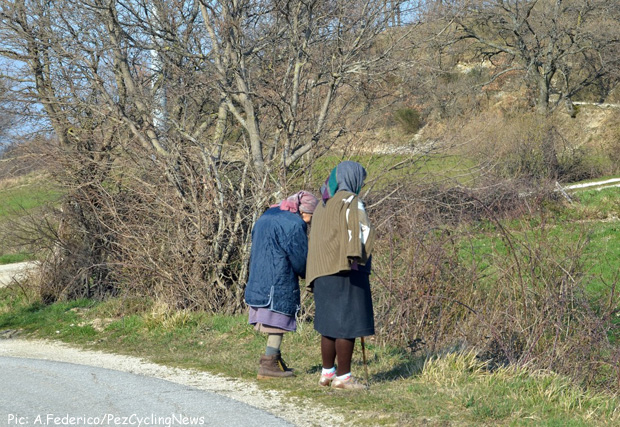 In fact I meet two ladies, dressed in a very old fashion, but really looking nice; something recalling the old times, something very Italian, I should say. But they are turned looking into the valley; not a word, I’m a foreigner and I don’t deserve their attention. 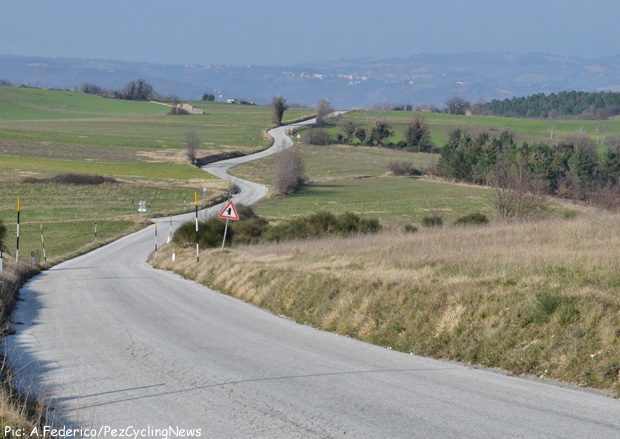 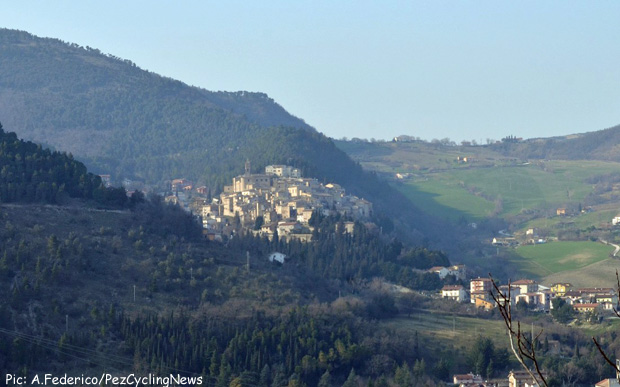 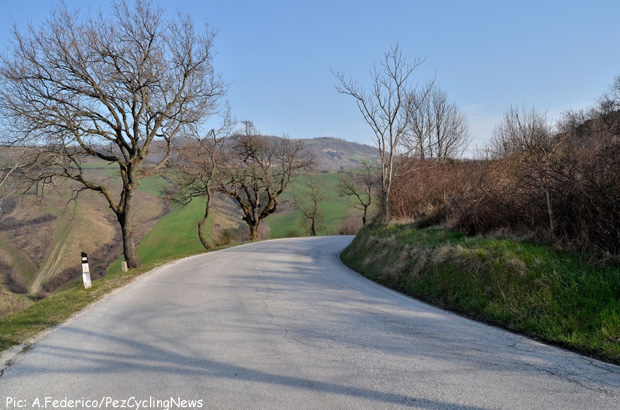 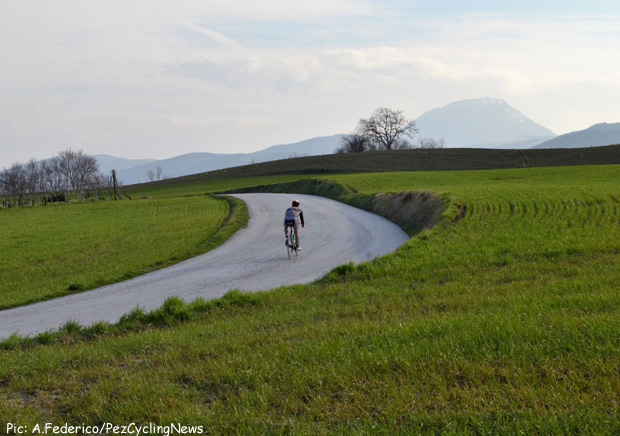 The Monastery
In this valley everything remained in the past, even the people (as I experienced…). Towns are sitting on the top or side of ancient hills and everything is quiet. We pass beside a very old church and Michele stops me. He knows these ancient monasteries very well because of his job. This one is Sant’Urbano and comes from the XI century (1000 years ago); it was founded by San Romualdo (yes, the mountain also took his name), and it really is worth a visit. 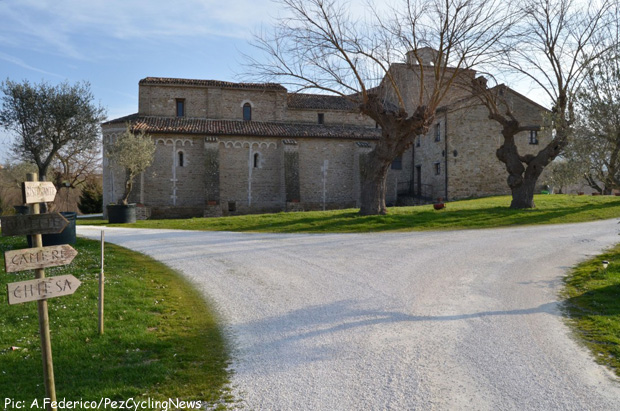 The monastery dedicated to Sant’Urbano. This is a place to visit for all those interested in medieval architecture; or history 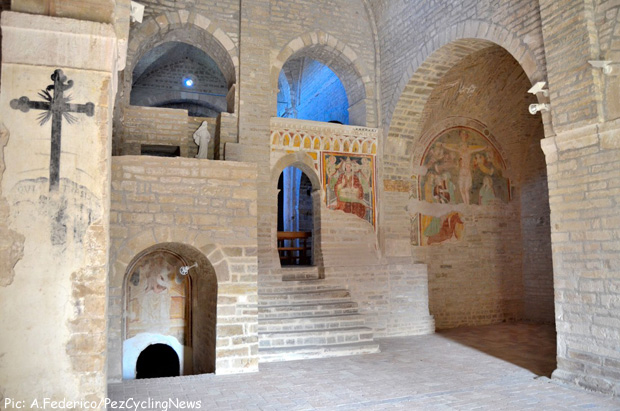 Inside you can find a very peculiar architecture on two different levels (in practice you have two churches in one) and still you can find some very ancient fresco on the walls with a crucifixion. It’s a magic place, you have really the impression to travel in the past.

Now this place is open for a visit and also for a lunch; beside the church you can find a restaurant with some special local food. Unfortunately for us though it’s becoming dark and we still have to ride the last climb of the day: Crisperio. This is the classic hill that RCS put at the end of a long stage to have an interesting finale. But this time, the riders will climb it twice, in a circuit. And we had a surprise.

Suffering at Sunset
We leave the valley and we bound west, with the sunset in front of us. It’s a long flat from San Romualdo to San Crisperio but it isn’t a real flat – more a false flat and although it isn’t an easy ride there won’t be any selection here.

So now we arrive to the key moment of the stage, coming after 200km of riding for the pros. I’m sure we will have a lot of surprises in the final because the climb it’s not quite like what you’d imagine from the altimetry. 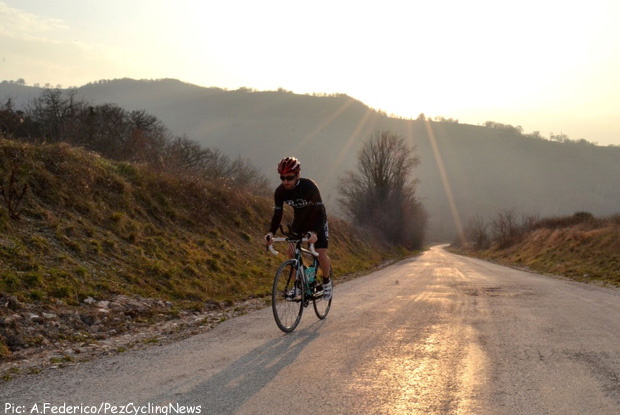 Michele is already tired when he starts it. The sun is going down fast, it’s just the beginning of March and it’s also a bit cold now. This climb is very irregular. The gradient changes every three hundred meters; there are at least 3 different moments when you feel that the climb is over but, actually, it starts again to come up, harder than before. The view is very nice, through the countryside, but riders won’t have any chance to watch it. 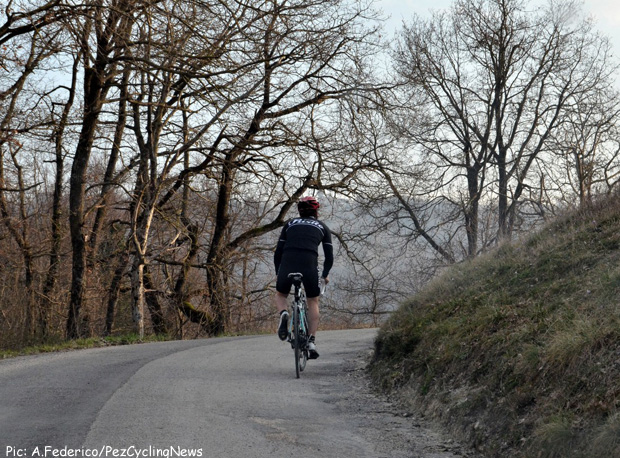 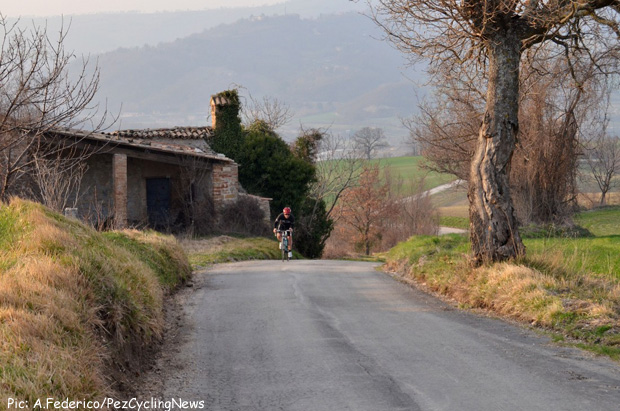 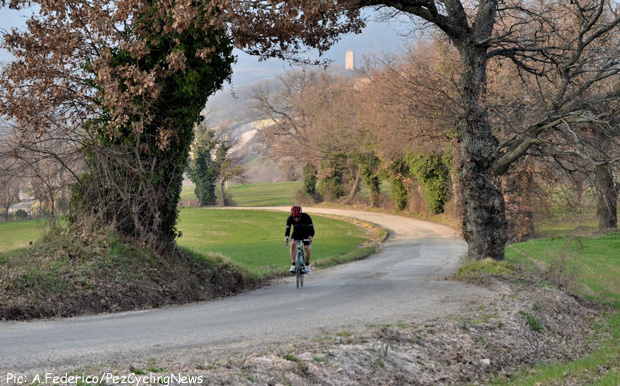 There are two switchbacks in the very final part of the climb and these could well be the key moment of the climb, where someone can leave all the others behind. 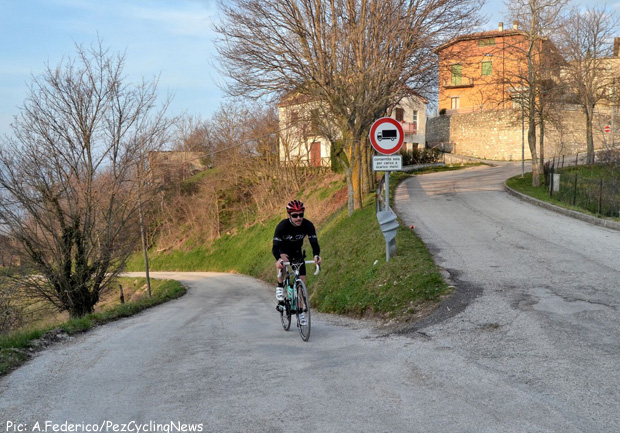 At the top there’s no time to recover because the descent starts immediately and it finishes once you are in Castelraimondo: the finish. This is a small town in the middle of the Marche region, surrounded by Appennines that now seem like Alps with the snow on their peaks and the sun disappearing fast behind them. It’s a late afternoon of March and great cycling is going to come back in this land. After Strade Bianche will be the time of another great competition: from one sea to another, thinking to the first monument of the year. It won’t be an easy trip. But for us, it will be another great adventure. 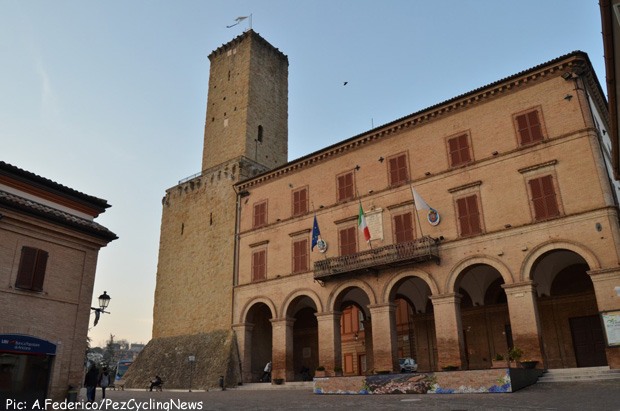 Annemiek van Vleuten On The Podium In Drentse