Why don’t they make the same [mountain passes] in France?
–Romain Bardet 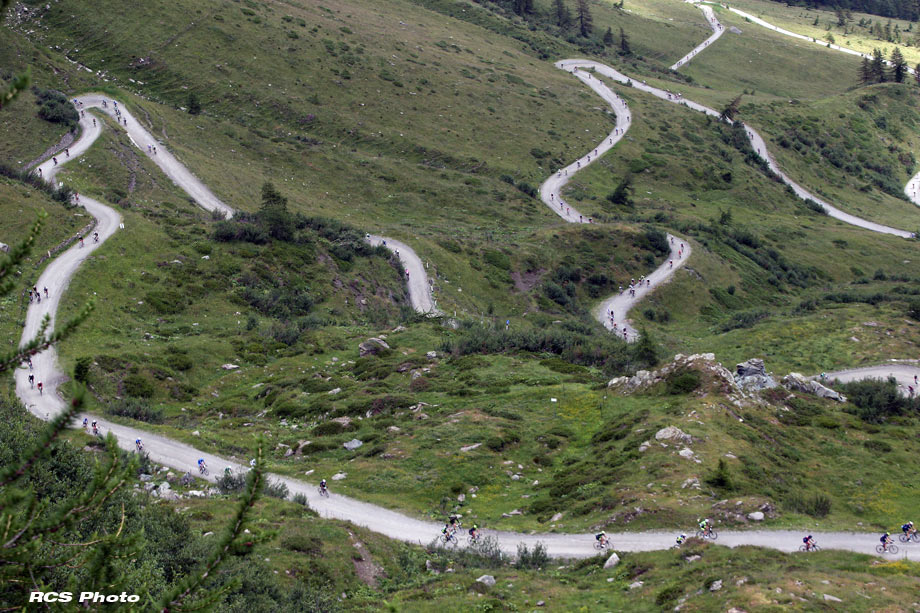 “Eighteen and a half kilometers to enter the myth,” reported RCS Sport, describing this year’s return of the Gran Fondo La Marmotte – Sestriere – Colle delle Finistre cyclo sportive ride on July 24th, the second edition. Over 1,000 riders set out on sunny Sunday morning from the starting line at Sestriere, double the number from last year’s inaugural sportive ride, with just over 300 completing the Gran Fondo (117km and 3,100 metres of total elevation) and over 500 completing the Medio Fondo (93km and 2,400 metres of total elevation). 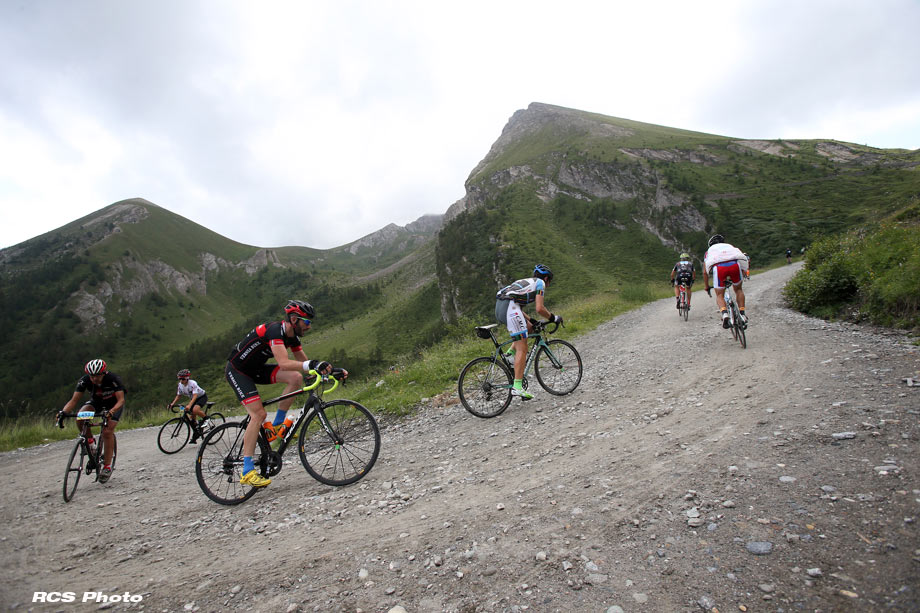 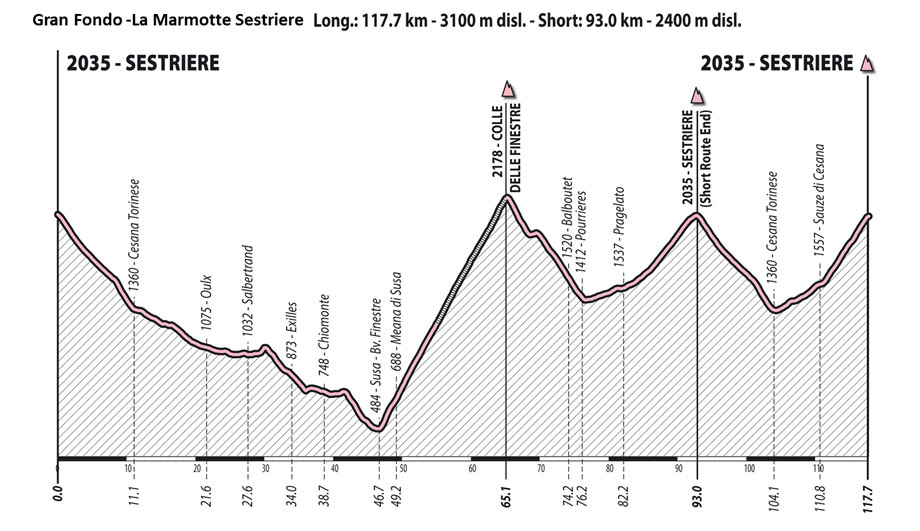 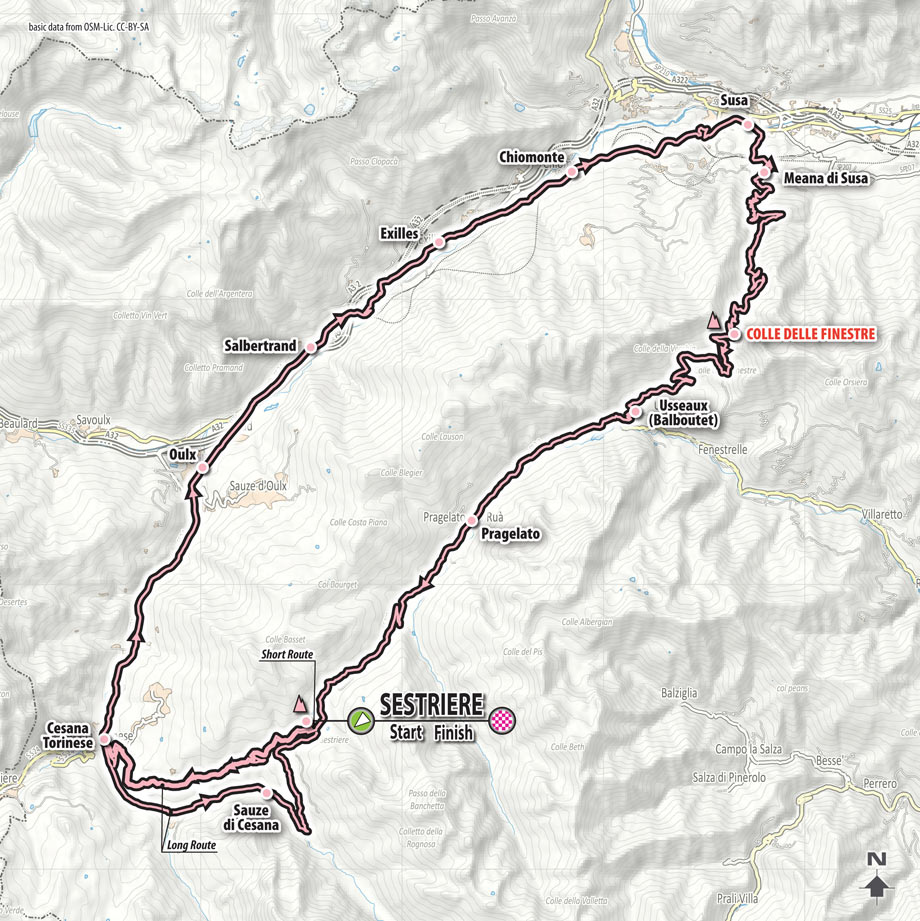 Pez caught up with two of the Gran Fondo participants throughout the weekend to get the insider’s view of the event. Steve Berard, the only American to participate in the event, and his friend James Endicott, British, are both ex-pats living and working in Grenoble, France. These two have driven over to Piedmont, Italy for the weekend to try their legs on the infamous Colle della Finestre climb. 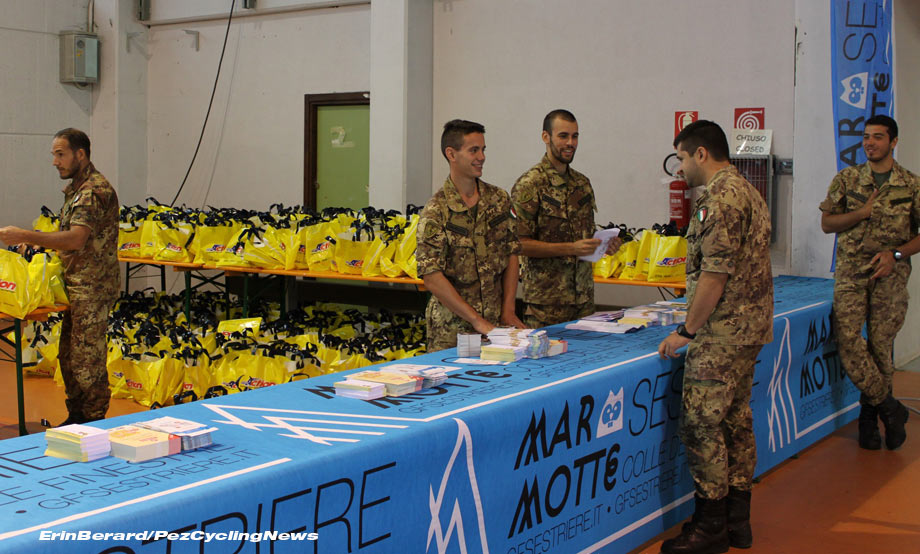 Pez: Why this Gran Fondo? What is motivating you to climb the Colle della Finistre?

Steve: The climb is in a class of its own, it may not be as well-known as some of the climbs in the French Alps or Pyrenees that are popularized by the Tour de France, but its 7.8 km stretch of gravel road to the summit makes it mythical among cyclists, like the summit of Mont Ventoux.

James: We wanted to take advantage of the Gran Fondo event and the chance to climb it like a pro, the race organizers have prepared the gravel section as they do for the Giro d’Italia and we will have race support on the road. Oh yeah, and we get to be timed! 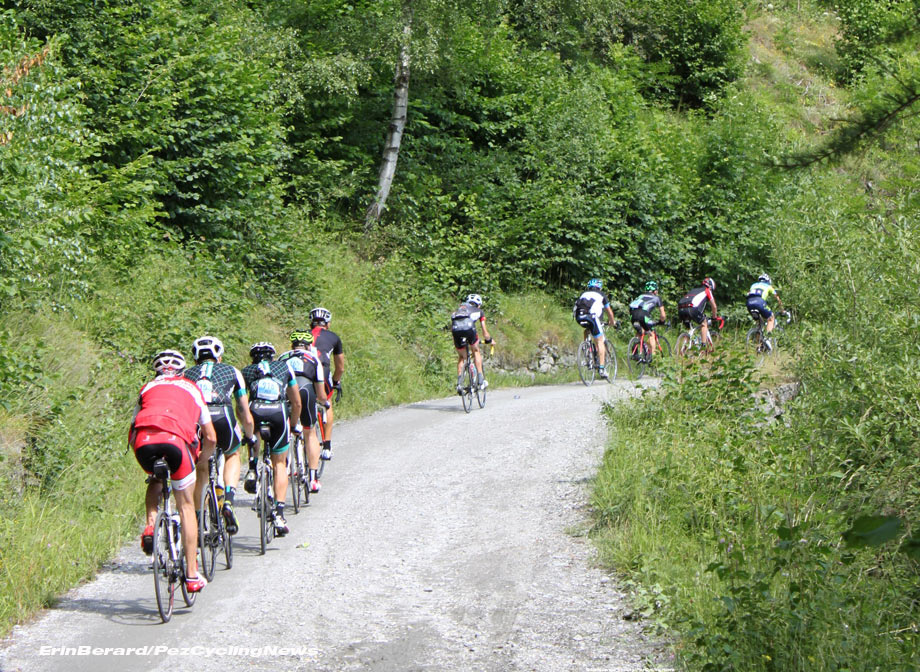 Pez: Are you two aiming for a particular finish time?

Steve: [just laughs] Under 6 hours would be nice, 7 hours is the cut-off. Actually, I just looked at the KOM on Strava for the Colle della Finistre and it’s humbling. Steven Kruijswijk with Team LottoNL-Jumbo holds the record at 1:03:43 and Romain Bardet of AG2R La Mondiale who just took second in the Tour de France, is 21st at 1:19:25. I especially love Bardet’s quote: J’ai trouvé mon col préféré : Colle celle Finestre. Pourquoi ne font-ils pas les mêmes en France? (I found my favorite climb: the Colle della Finestre. Why don’t they make the same mountains in France?)

James: We’re talking about an 18.5 km climb at an average gradient of 9 percent, not to mention the gravel road awaiting us at the very top. We just hope to not get passed by too many women! The fastest women’s time posted is 1:28:01! 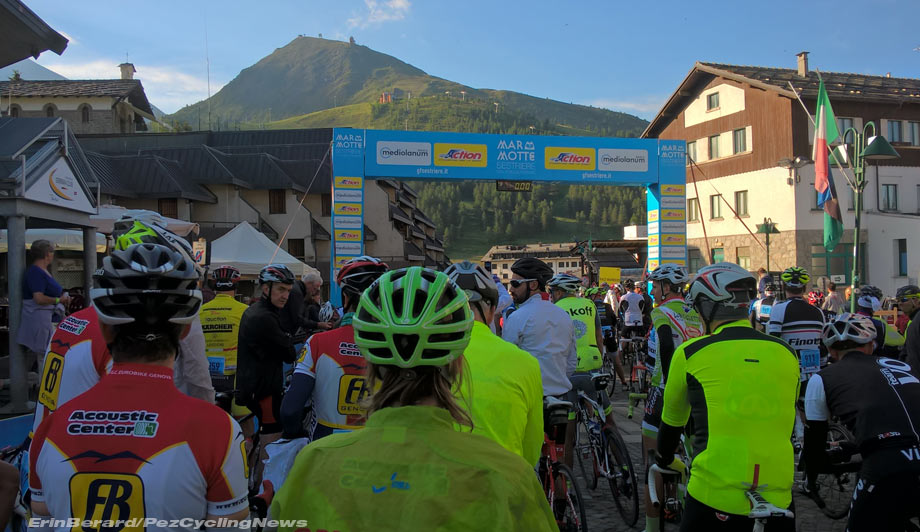 Pez: What was your favorite section of the race?

Steve: the Colle della Finistre when you come out of the trees and then the descend back to Pourrieres, before climbing back to Sestriere. 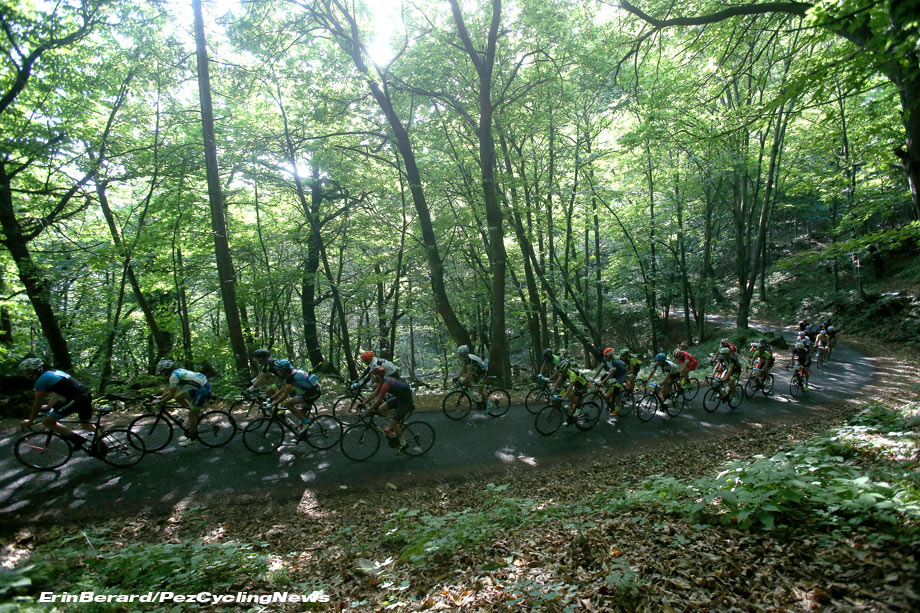 James: the first part of the Colle della Finistre with its hairpins through the woods, you feel like you are climbing through a scene out of Lord of the Rings. If you looked really carefully, you could see these Madonna statues tucked in the rock outcroppings, around the turns, and I thought “at least someone is looking out for us up here!” 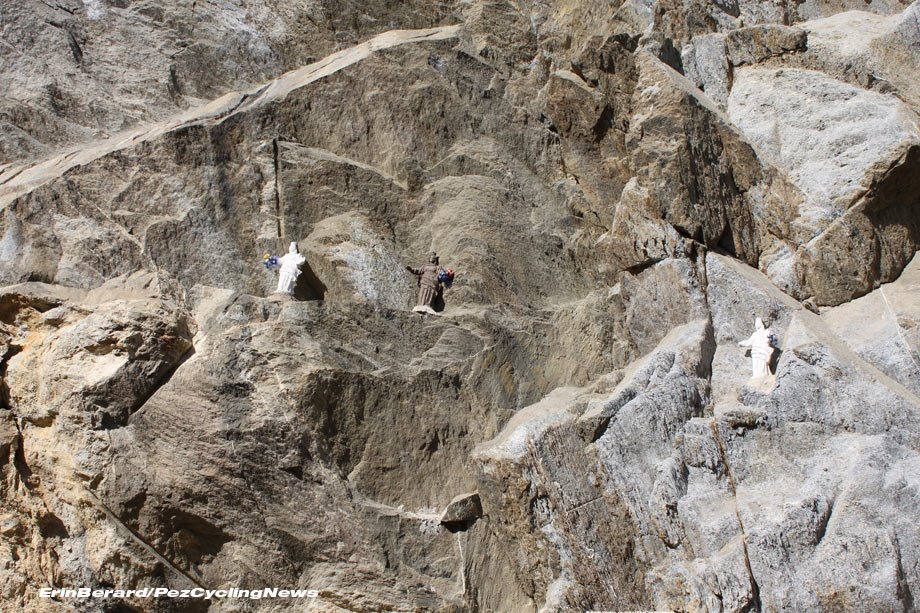 Pez: What advice do you have for anyone thinking about doing this in the future?

Steve: Watch the first descent from Sestriere into Susa, as the adrenaline is flying and people tend to not hold their lines. Opt for the Medio Fondo, the extra loop down and back up Sestriere did not add much to the experience.

James: Go for a short ride the day before to make sure your bike is in working order. I luckily discovered a problem with my shifter early and was able to go to the local bike shop in Oulx to get it fixed.

The winner of the Gran Fondo was for the second year in a row Enrico Zen (Team Beraldo Greenpaper), with a time of 3h45:10. Among the women, the winner was Erica Magnaldi (Team De Rosa Santini) who completed the course in 4h17:46. 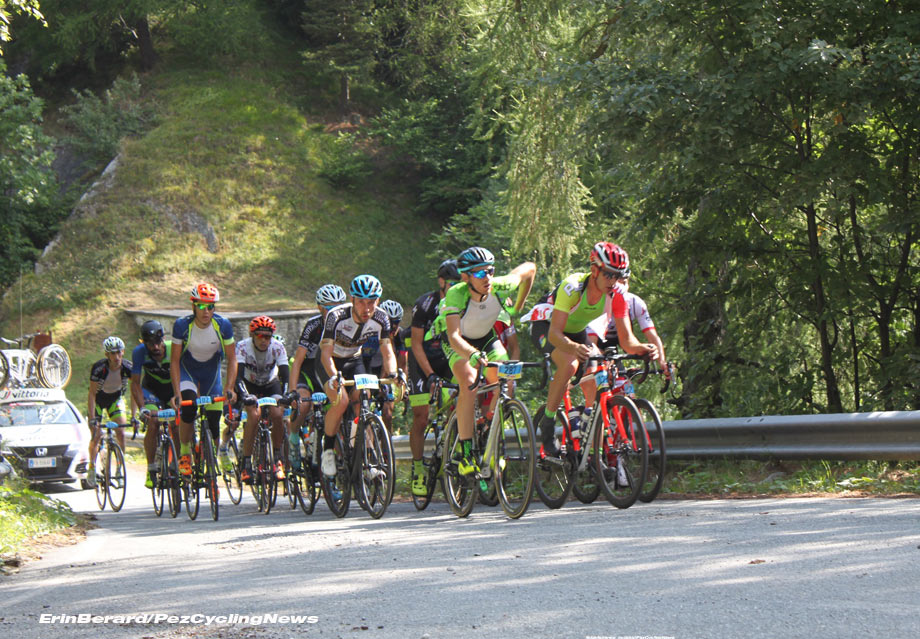 Be sure to catch Steve and James’ interview with RCS Sport later this week on Pez’s Facebook Page.