Road cycling on the Sunshine Coast of Australia.

Almost at the end of a year long trip around the world with the family the coronavirus crisis hit and I found myself ‘stuck’ in one of the most beautiful places on earth, Queensland Australia. It could have been worse…

Still, there was a few things missing to make this travel hiccup into a positive experience for me – like a bike for instance. Well as luck would have it former Pez contributor and experienced Euro tour guide Steve Veloroo Prokop was back in his old home region, just down the road from me and was able to provide me with a rig. Not only that he was back in Australia from his normal abode in the south of France as he and partner Julia were looking at expanding their tours from not just France, Italy and Spain but also to the Sunshine Coast in Queensland and would I like to come along and check out a few of his favourite spots? Well that was an easy answer and I quickly dropped the wife and the kids down at the beach and I was away for a day of exploring in the beautiful Sunshine Coast hinterland. 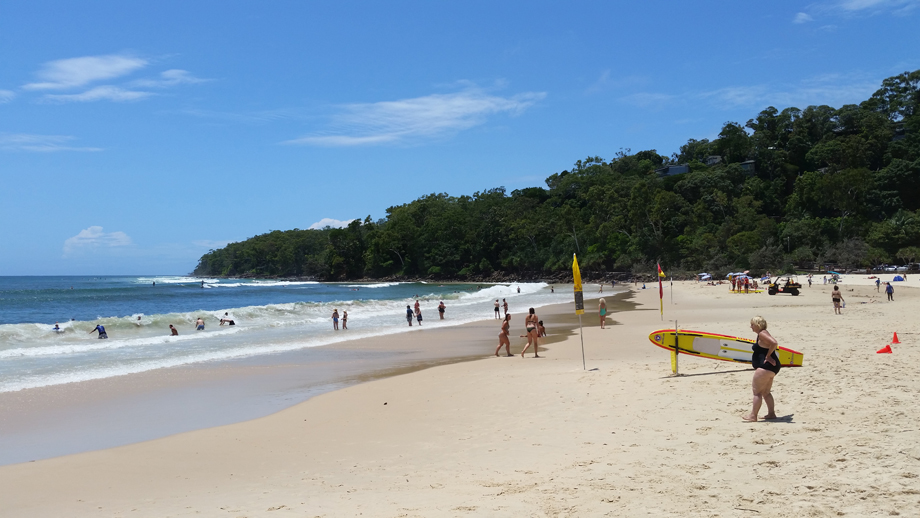 I dropped the wife and kids here at Noosa beach but there are many to choose from on the Sunshine Coast – about 60km of beaches in fact!

You can do some beautiful rides along the coastline here of course but Steve prefers to take his clients away from the crowds and into the beautiful backcountry or hinterland of the region for his rides so that is where he wanted to take me. 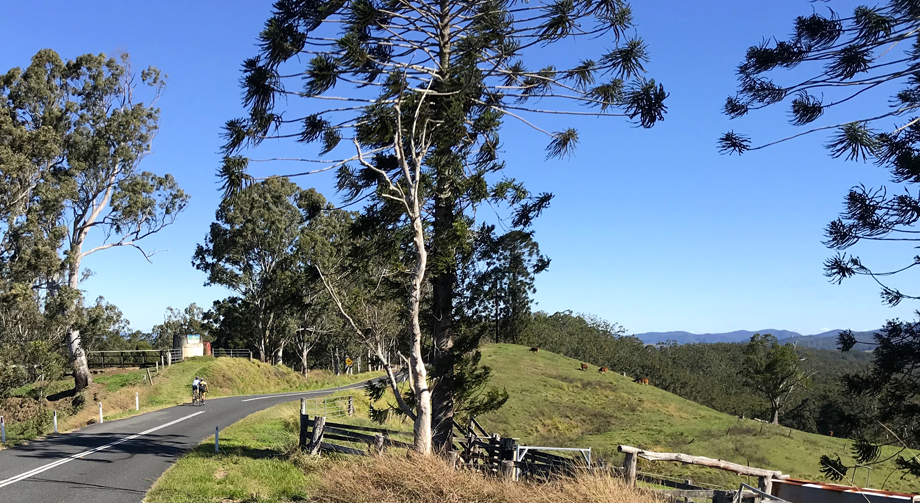 The beaches were certainly great but this is my type of holiday! 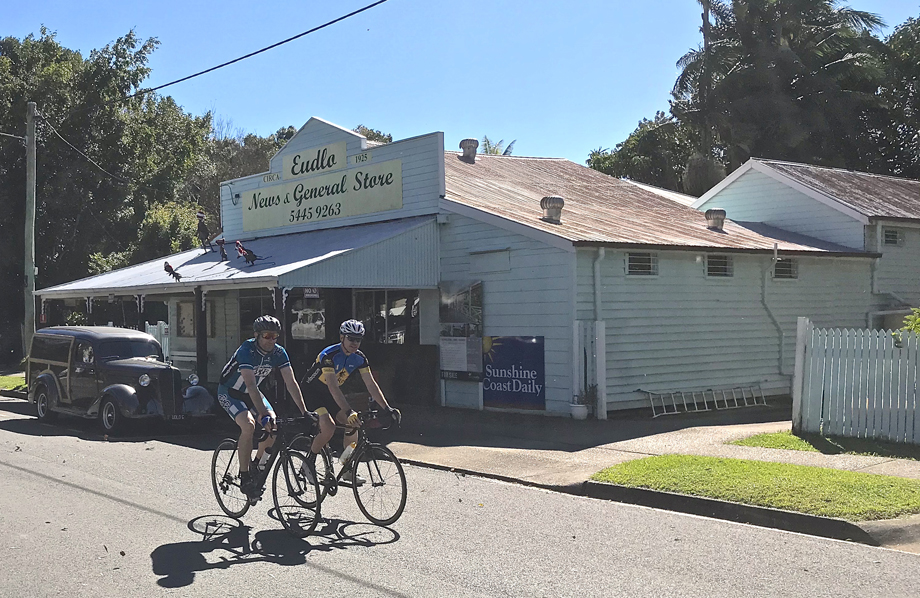 Rolling through the pretty little town of Eudlo with its old fashioned general store complete with vintage delivery car out the front. 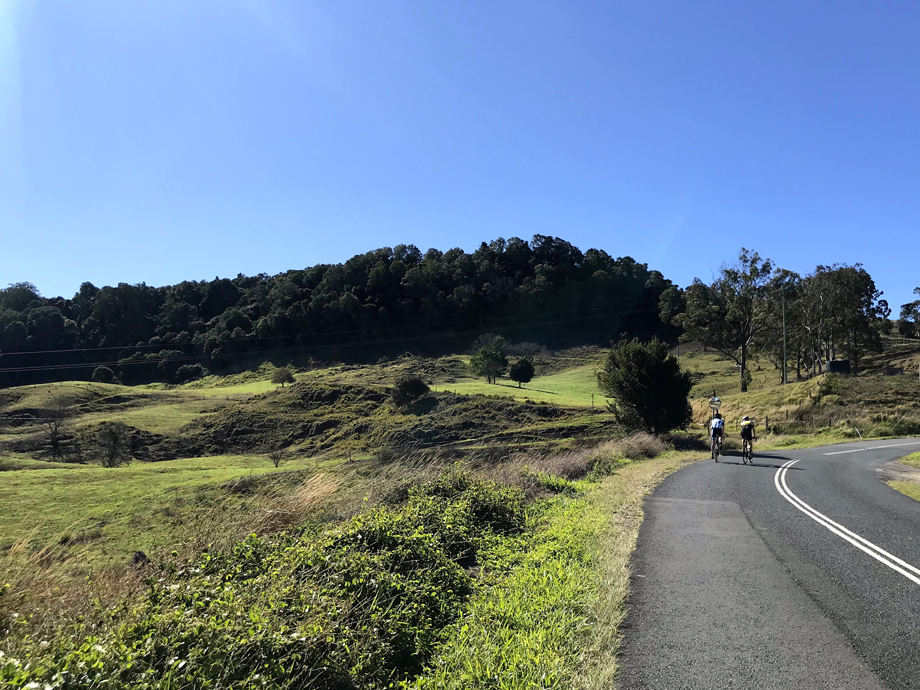 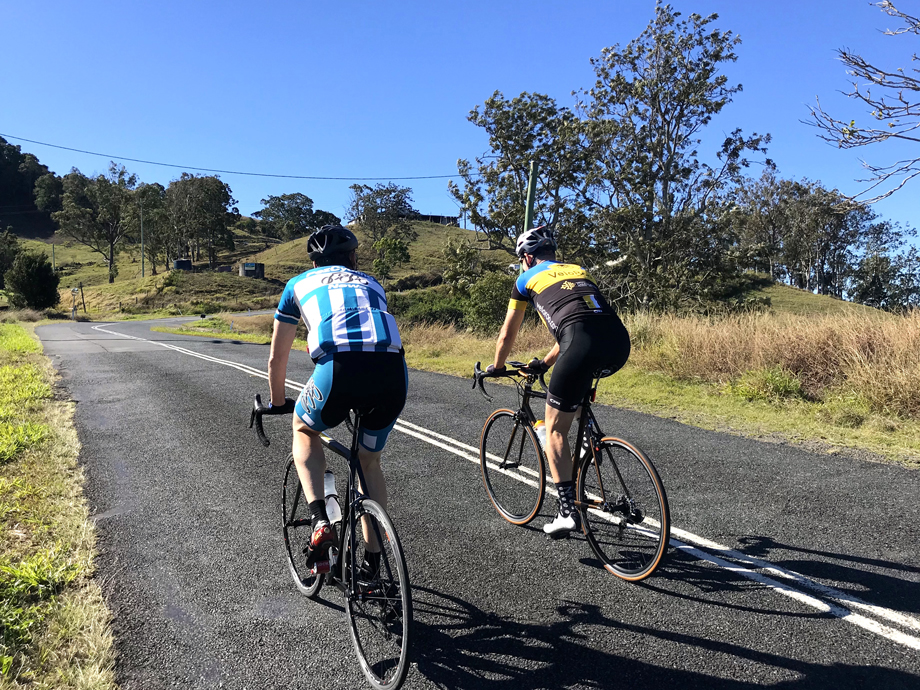 It’s far from flat but it sure is pretty. 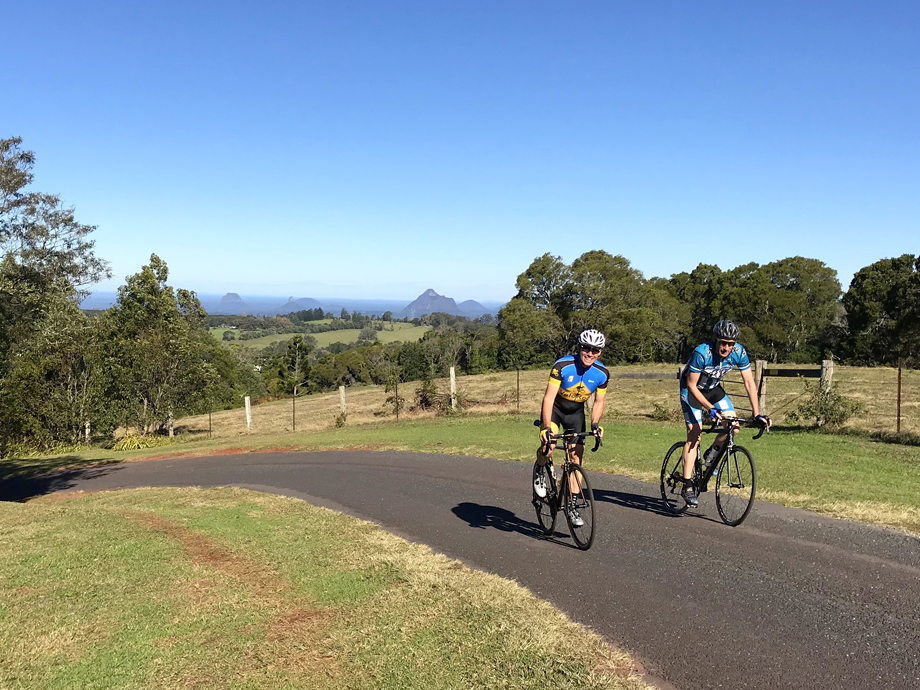 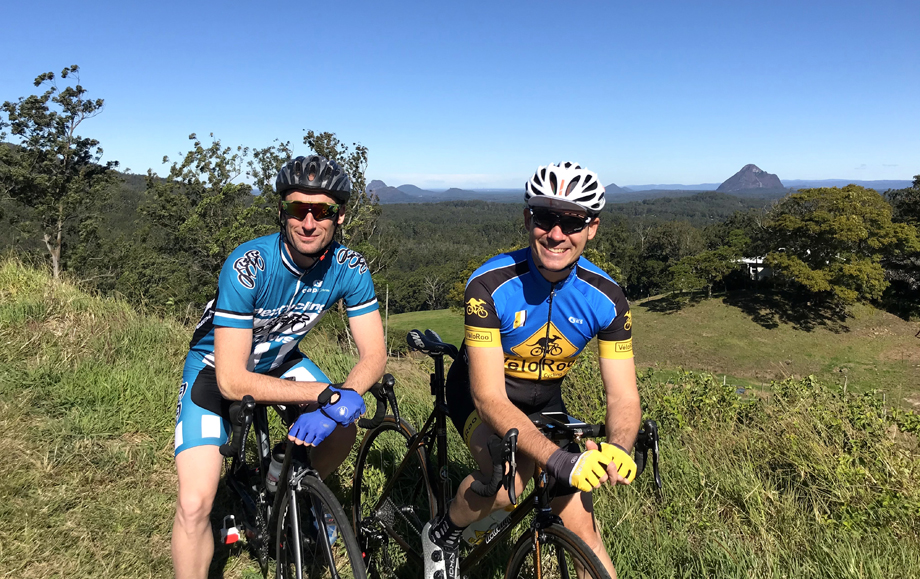 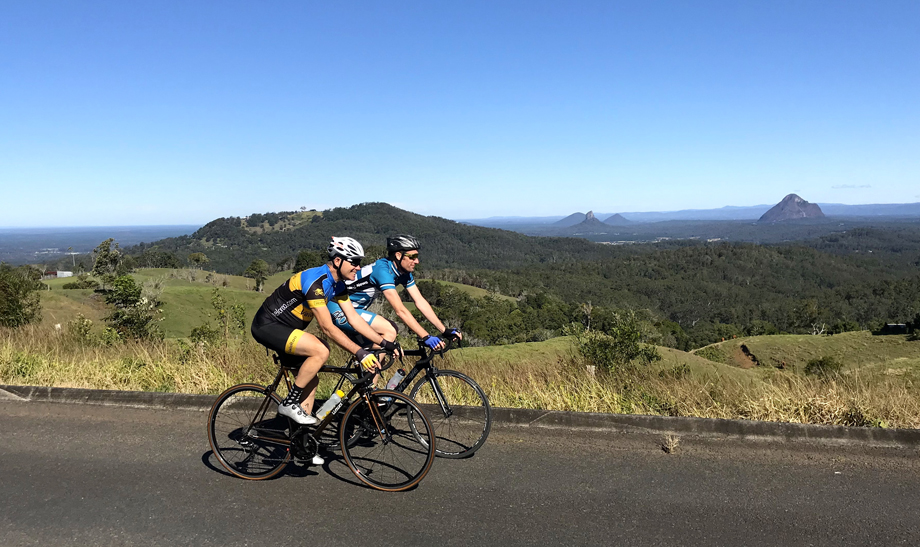 I can confirm that his rides certainly do take in the best features and although unfortunately I didn’t get to spend longer than one day in the region – from what I could see it was a little slice of paradise. Also to note is the fact that this ride was done in July – right in the middle of Queensland’s so called ‘winter’. Short jerseys and knicks all around with average temperatures hovering around the low to mid 20’s celsius (70’s fahrenheit). 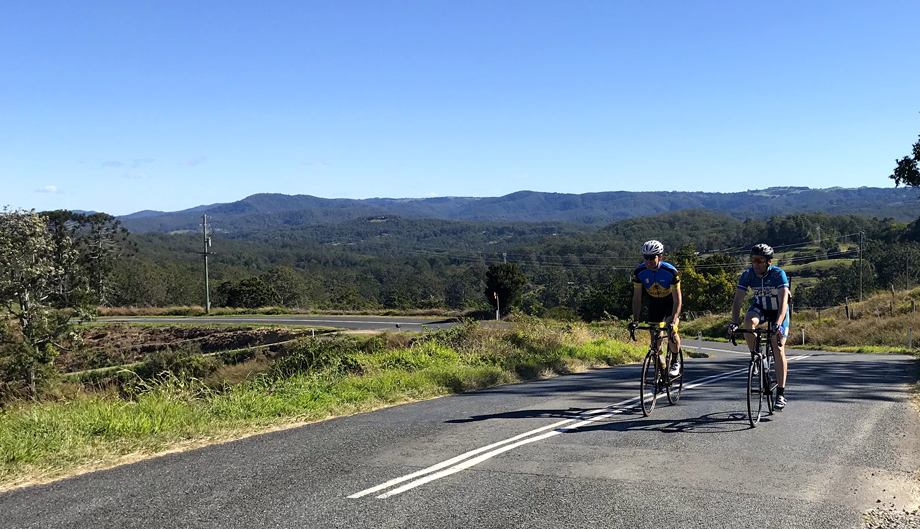 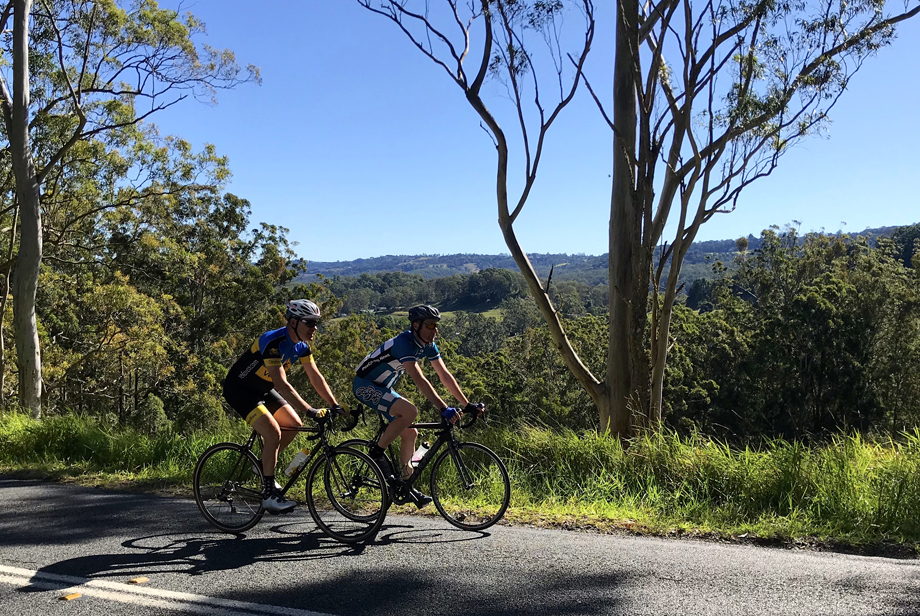 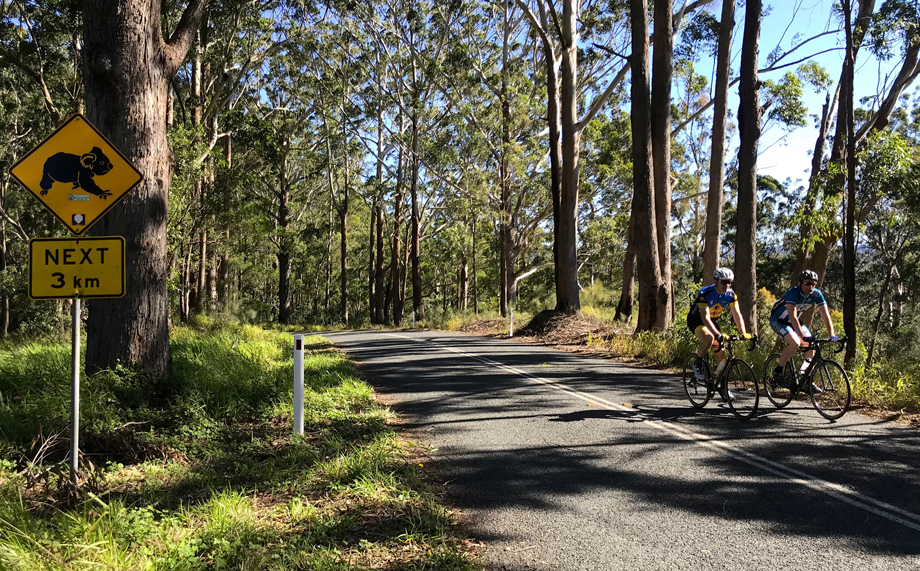 The winding roads, rolling hills and spectacular views remind me of some European roads but the roadsigns are sure 100% Aussie! 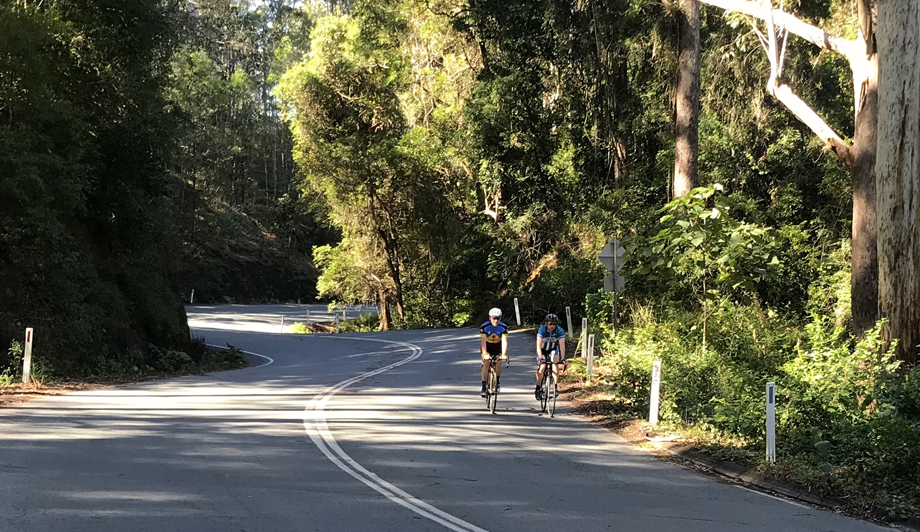 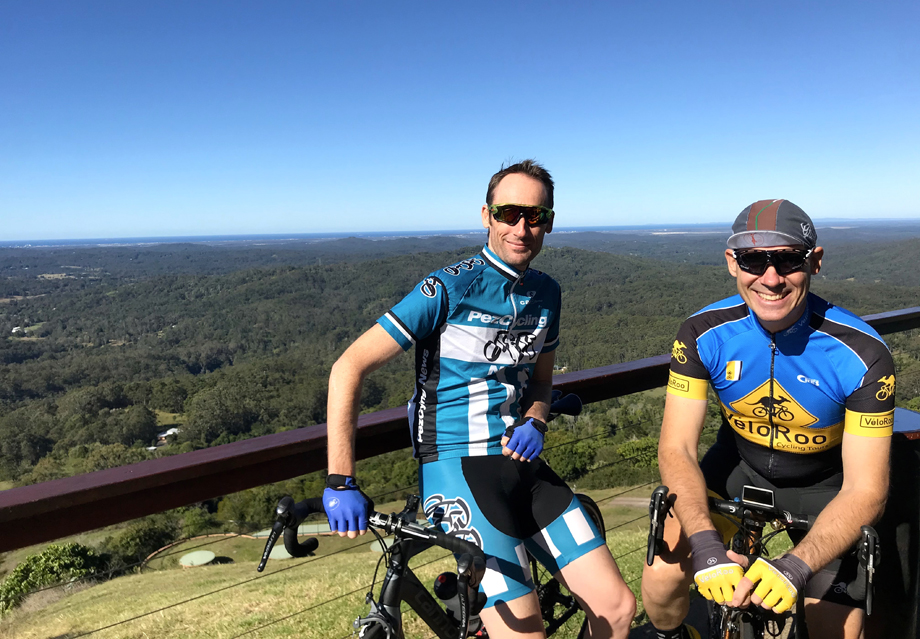 A well earned stop to admire the view after some more hills under the belt.

For me the corona crisis came with a bonus as exploring this part of my birth country was a true pleasure and hanging out with Steve Veloroo and his infectious smile make any ride a great experience. With heavy travel restrictions in place at the moment in Australia joining Steve and Julia on the Sunshine Coast or on any of their European trips for that matter is a difficult prospect so they have a totally flexible approach to cancellations with full refunds and no penalties if covid19 changes your travel plans. Check them out at veloroo.com to find out more and visitsunshinecoast to see a little bit more of this simply spectacular region of Australia.