When it comes to places to ride in Europe, central Germany usually isn’t the first to come to mind. For various reasons, I’ve had many an opportunity to enjoy the roads near Heidelberg, Germany, and the more I see of the rest of the world, the more I can’t help but be convinced that this gorgeous region has to be one of my favorites.

Heidelberg, Germany is located about halfway between Frankfurt and Stuttgart near the convergence of the Rhein and Neckar Rivers. The area is punctuated by three distinct terrain options: flat (very), rolling hills, and mountains. To the east of town is about as flat as you could ever hope to find. 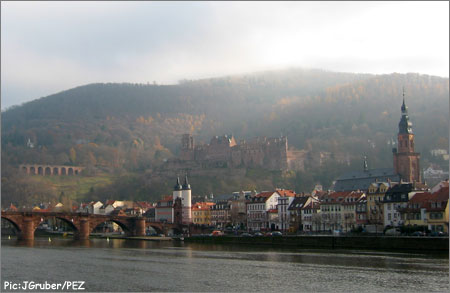 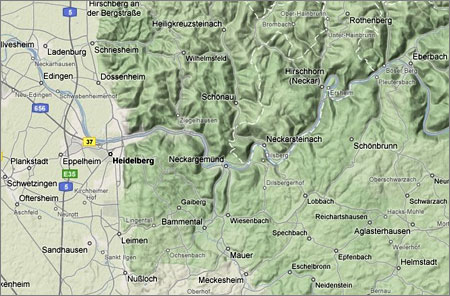 To the northeast: mountains, to the southeast: hills, and to the west: flat.

My most recent trip to Heidelberg was due to the Deutschland Tour making its way through my old stomping grounds near Heidelberg, it also coincided with the annual Radtreff Rhein Neckar, which is a huge ride organized by my great friend, Rolf Heutling and supported by Manfred Lautenschlaeger. 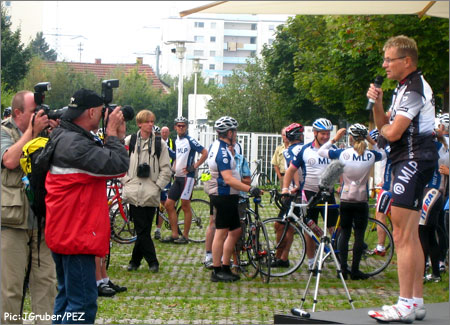 Rolf has a few words for the group before we set off. 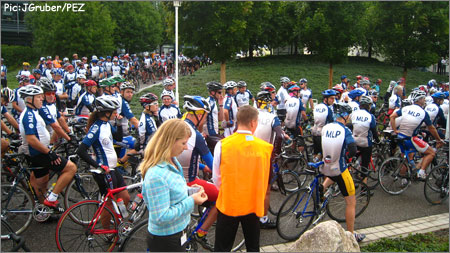 About 300 people showed up for a 110km jaunt along the latter part of the day’s stage, which would later be won by Leonardo Bertagnolli with a late race effort that saw him get to the line just meters in front of the elite group that made it over the horribly steep Koenigstuhl not more than an hour before. 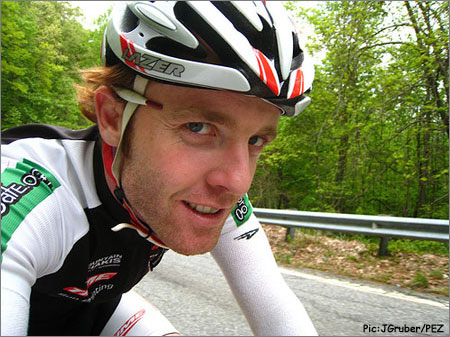 The MLP Tour saw none of that dramatics of the stage, but I’m going to guess it was a little bit more fun. 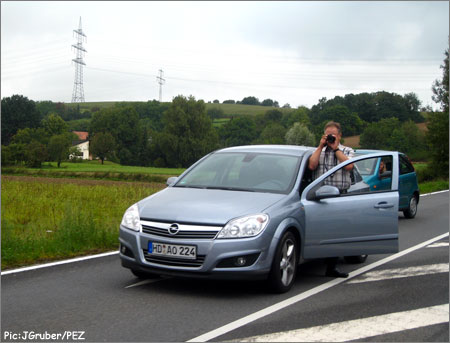 The ride even drew the interested attention from motorists stopped by the rolling enclosure. 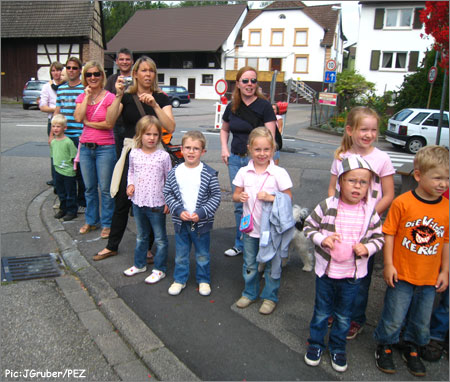 It never hurts to hear cheers from the side of the road. 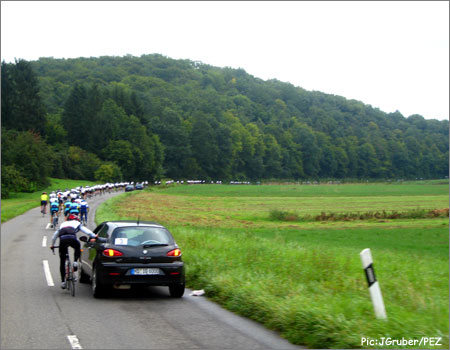 The ride started in the town of Wiesloch, about 10km south of Heidelberg. The huge group headed to the southeast out across the ever rolling hills of the Kraichgau. The first half of the ride saw us heading toward the Neckar River and the mountains of the Odenwald, which plunge down to meet the riverbed below. 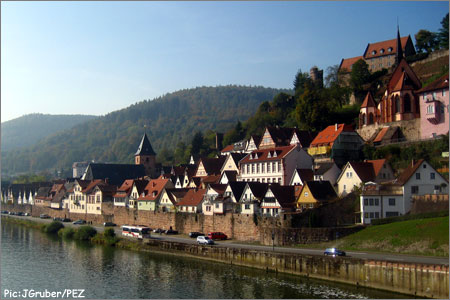 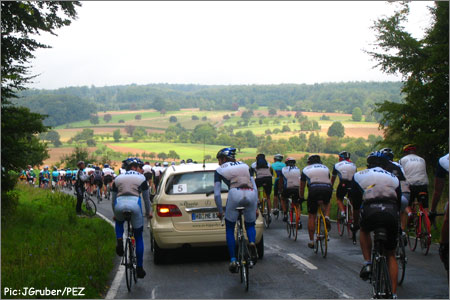 Relax, Take It Easy
After about an hour on the road, we came to our first rest stop complete with food, drink, and nice views. There was no hurry in today’s ride, and it was a welcome change to a normal day…hop on the bike, do the work, go home. 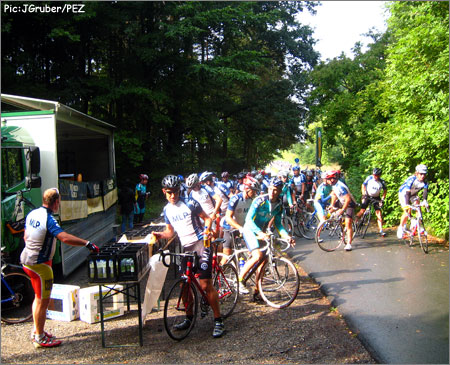 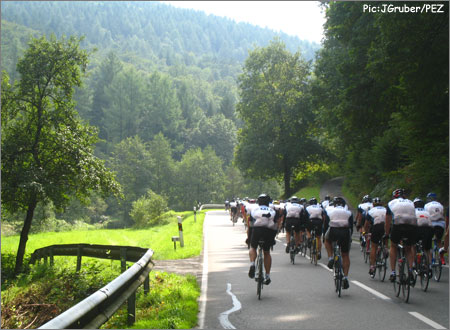 Lunchtime!
Rolf makes sure that his participants are well taken care of, and at about the halfway point of the ride, there was a huge spread of food waiting. 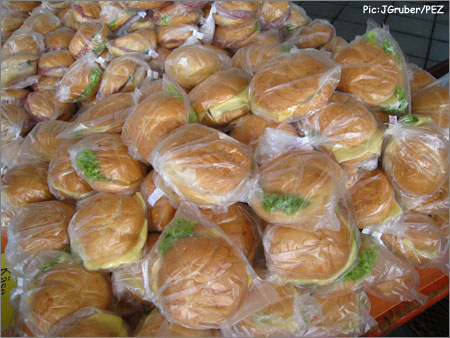 And not just sandwiches, pastries, and other goodness – this is Germany remember, and one of the sponsors of Rolf’s U23 team, MLP, is a local brewer: Mallbraeu, so there was of course beer a’plenty for all those interested. I was one of the interested. 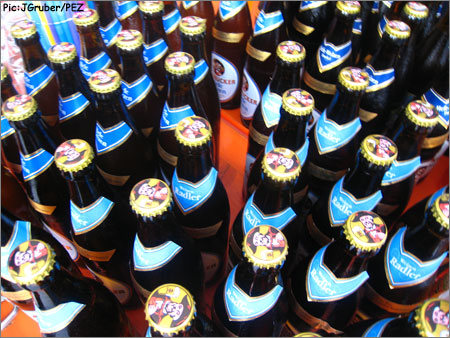 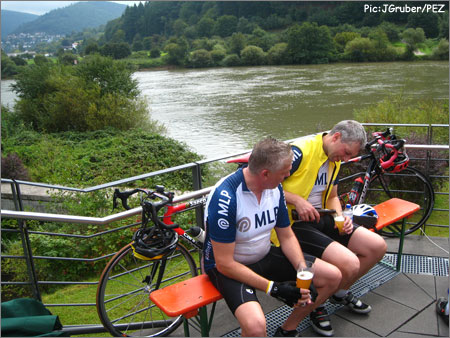 Not a bad place to kick back for a few minutes…

Back To The Road
Just as I was about ready to lie down for a nice nap, it was time to get going again, and immediately uphill. 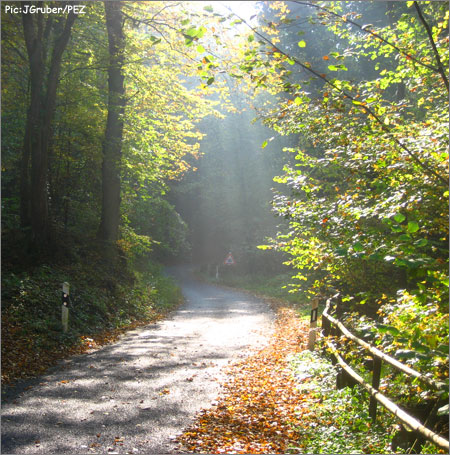 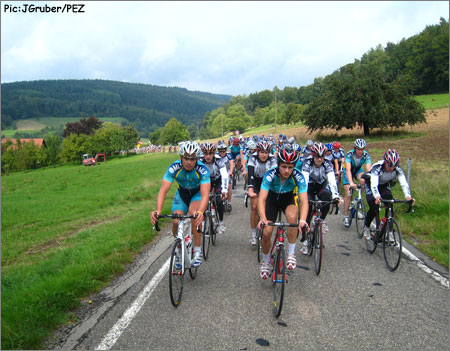 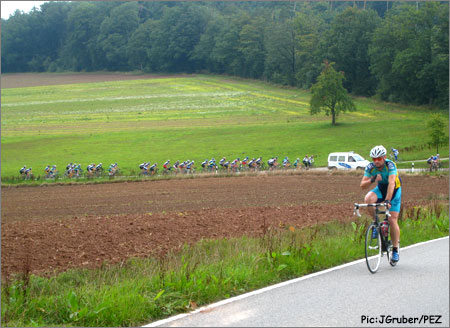 At this point in the ride we were on my favorite roads. The friendly mountains of the Odenwald are everything that I could ever ask for in a road. I love to climb, but I don’t want to climb forever (boring) or struggle up awful steep inclines (where’s the fun?) – so the 3-7k climbs of the Odenwald with largely manageable gradients are just perfect. 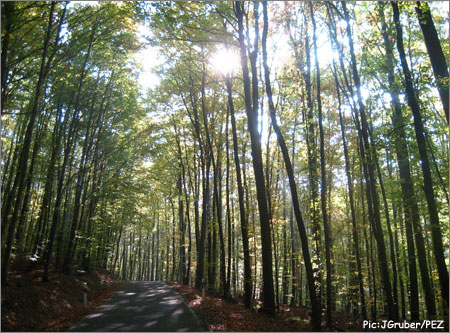 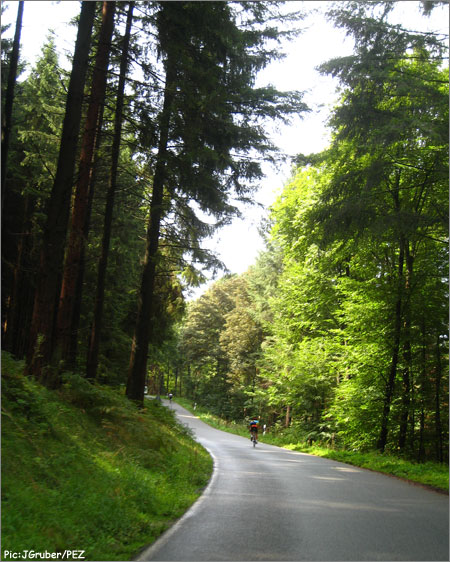 The roads can be and mostly are tiny and only seldom used. Normally, it’s just you, your breath, and a gorgeous forest on all sides until you get to the top and somehow the view opens up and an expanse of beautiful unfolds. 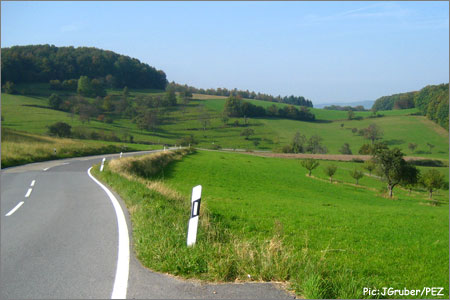 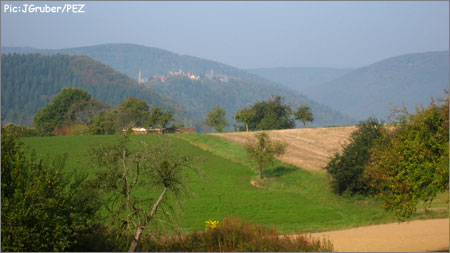 Out Of The Mountains, Into The Hills
The ride didn’t linger too long in the Odenwald – it’s not really the place for a 300+ rider group with people of ALL abilities. The friendly hills of the Kraichgau were the next stop on our tour of everything great. 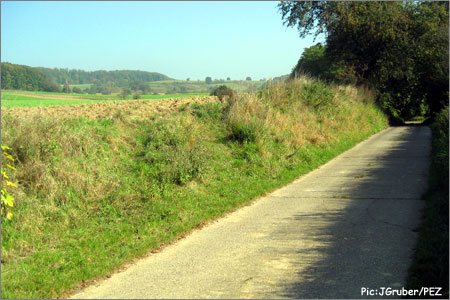 I’ve spent so much time in the Kraichgau training with Rolf. He loves the roads, knows the roads, and happily shares them with the hundreds of riders in attendance. For the most part, the hills are rolling and pleasant, but there are some Flandrian-esque monsters hidden on the small field roads that follow crops and wine. 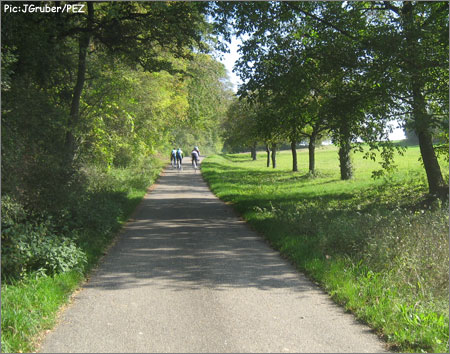 The Homestretch
The largely perfect weather for the ride rapidly dissolved to a downpour for the final 10 minutes of the ride, but we were home, and we were riding the route that some of the world’s best would be devouring in only an hour or two…perfect. 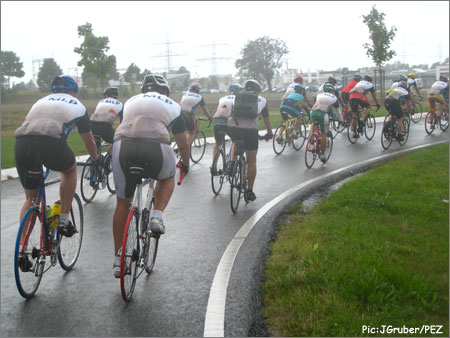 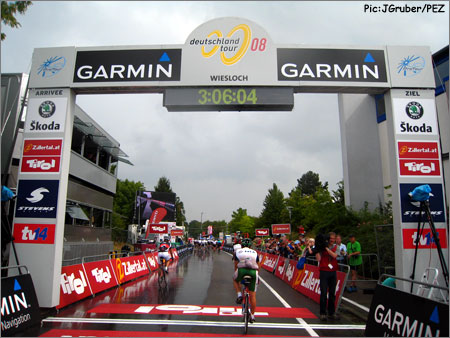 Riding For A Cause
The Radtreff Rhein Neckar, as it is known, is not just a whole bunch of people getting together for a few hours on the bike and a nice lunch. The ride has served a greater purpose for the past ten years and most of that is thanks to Rolf Heutling and Manfred Lautenschlaeger. 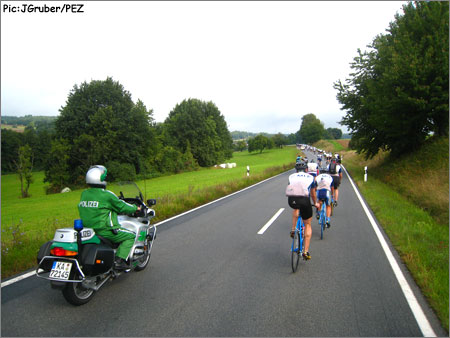 The rolling enclosure for a ride, which often stretches over 10 minutes of road, is impressive. 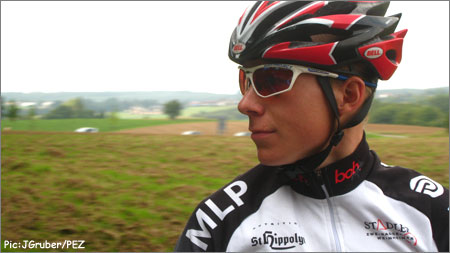 Mr. Lautenschlaeger is the owner of MLP Financial Services, and a philanthropist through and through. Mr. Lautenschlaeger takes on the costs of the tour on his own, and every euro brought in by the ride is donated to assorted charities, hospitals, and causes – not only that, he matches the money that the ride brings in through its participants. 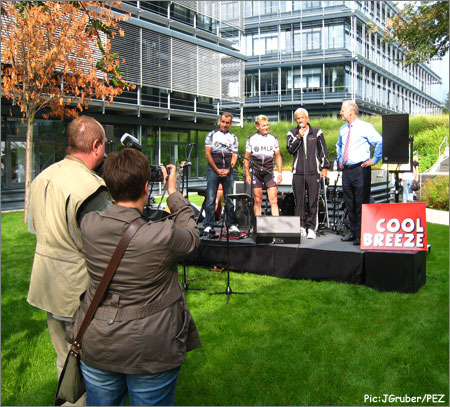 After the ride, the big checks come out and tens of thousands of euros head in the direction of causes in need. It’s incredible to witness. 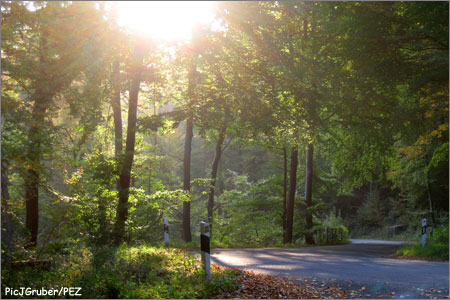 For more, head to JeredGruber.com
Like PEZ? Why not subscribe to our weekly newsletter to receive updates and reminders on what's cool in road cycling?

PEZ SOCKS: The Best You Ever Looked!